10 Reasons to Go to Bimini 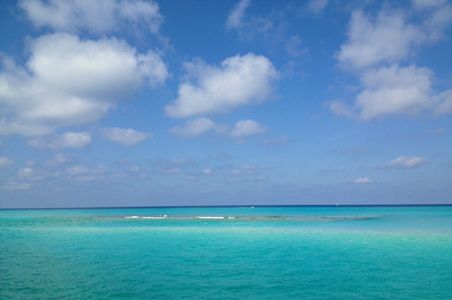 Even for the savviest travelers, there’s a tendency to overlook those spots that are right under your nose. And the irony, of course, is that these can be the very best places. Case in point: Bimini, a collection of two islands and a sprinkling of cays situated just 50 miles off Florida’s east coast in the Bahamas. Deep-sea fishermen have long honed in on Bimini. After all, these waters—where the Gulf Stream meets the teeming-with-wildlife Bahamas Bank—are rich with tuna, snapper, wahoo, and other prized game and good-eatin’ fish. And while the fashion conscious Miami contingent tries to re-create South Florida on the tip of the north island at the upmarket Bimini Bay Resort, there are still some very unique and authentic Out Island Bahamas experiences to be had in this exotic outpost so deceptively close to Florida.

Commercial airlines—including Silver Airways (operating with United) and several Bahamian carriers—touch down at Bimini’s tiny airport (read: little more than a single-story concrete building), connecting from Nassau, Freeport, and Florida. But far and away, the most fun way to arrive here is via a splash landing in a seaplane with Tropic Ocean Airways, which runs scheduled and private charter flights from Miami and Fort Lauderdale. The company’s CEO is Navy pilot and Top Gun instructor, Rob Ceravolo, who counts Bimini among his favorite places to fly. You’ll meet him or one of the other seaplane pilots at the private aviation terminal at Fort Lauderdale’s international airport to make the 35-minute hop to Bimini, landing at the watery doorstep of the famed Bimini Big Game Club. 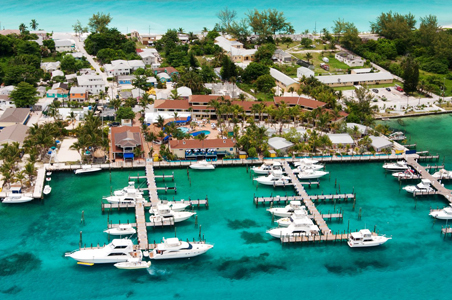 There are only a few places to stay on Bimini, and the longstanding favorite is the Bimini Big Game Club, which dates to 1947 and fronts the popular fishing marina, a perpetual port of call not only for firshermen but international yachties making their way around the Bahamas. Ernest Hemingway spent time in Bimini back in the mid-1930s, and black and white fishing photos lining the Big Game Club’s popular restaurant attest the fishing was as great then as it is now.

The hotel has standard rooms as well as stand-alone villas set close to the water, and everything’s got a Tommy Bahamas flair. As nice as the private balconies are, you’re just as likely to pass your time in a hammock by the pool or playing ping-pong or billiards in the shaded area below the restaurant. To reach the beach, walk across the narrow island to the ocean side, where the waves can get rough but the waters are usually a swimmer’s delight. 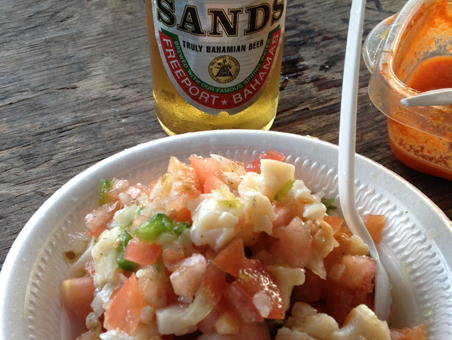 If there’s one specialty the Bahamas is known for, and rightfully so, it’s conch salad, a blend of tomatoes, green peppers, onions, and raw conch splashed with ample fresh orange and lime juice and spiced to your liking with atomically hot Scotch Bonnet peppers. And if there’s one place on Bimini to try this treat, it’s Stuart’s, a ramshackle wooden hut on the waterfront on your way from Bimini Big Game Club to the island’s north end. Join the locals to watch the news or whatever game is on while downing cold Sands beers and feasting on conch salad. The beautiful pink shells litter the water and small beach in front of the restaurant, where they’re harvested, and it’s no problem if you want to take one home for a souvenir (just soak the shell in bleach before packing to avoid serious odors wafting from your luggage).

Additionally, there’s a collection of wooden huts on the ocean side of the island near Alice Town that do simple fried dishes like cracked conch and fish fingers. And if you’re feeling DIY, head down to the docks in Alice Town to buy fresh Caribbean spiny lobster tails directly from the fishermen (a fair price is about $2.50 per tail), then bring it to the Bimini Big Game Club and they’ll grill up your feast with a spread of sides for atmospheric dockside dining.

For such a tiny island, there’s lots to do on Bimini. And while most of your activities will be water-based, it is worth checking out the cool Dolphin House—the abode of a well-known island resident that’s made almost entirely of crushed coral concrete, shells, and reclaimed tiles—as well as the pink-hued Bimini Museum, both in Alice Town. Then descend into Bimini’s 50 shades of blue—the waters surrounding the island are some of the most beautiful in the world, and there are many ways to enjoy them. Rent a paddleboard or kayak from Bimini Water Sports to make the short paddle across the channel to cays thick with mangroves where you’re very likely to see stingrays and sharks cruising the shallows. 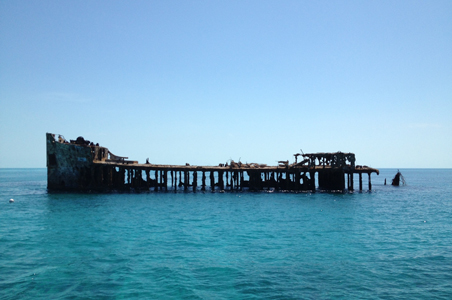 Or dip into a dockside cage at the Bimini Bull Run for the chance to ogle one of the ocean’s top predators—punchy bull sharks—up close. You don’t need to be scuba certified for the encounter since you’re breathing from a hookah air system. The sharks have been to drawn to the marina for decades by the free handouts from fishermen cleaning their catch. You can also head out on a snorkeling or diving trip with Dive Bimini to cool sites like the Sapona—a concrete ship wreck that sits half-way out of the water and was used during Prohibition to store liquor—or Triangle Rocks, where several Caribbean sharks are likely to be found converging on any given day (the bait box hung off the back of the dive boat keeps them interested). 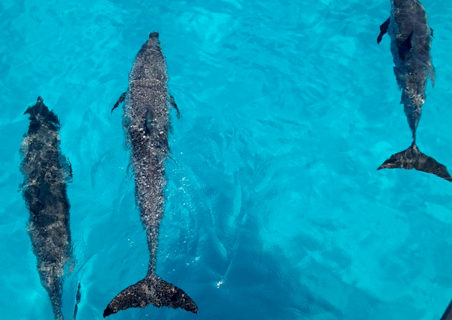 For a wellness slant, visit an area deep in Bimini’s mangroves called the Healing Hole, where mineral-rich waters bubbling from a freshwater spring in a creek arm fringed with mangroves are reputed to have restorative qualities (don’t be turned off by the murky hue). And for something guaranteed to keep you smiling long after you leave, don’t miss Bimini’s best-loved outing—free swimming with wild Atlantic spotted dolphins in water that looks even clearer and more turquoise than a swimming pool’s. The dolphins are residents in Bimini’s waters year round, but it takes a bit of a scouting mission to find them. When waters are calm chances are best, and once the boat has found the dolphins and they seem eager to engage, snorkelers can slip into the water and swim among them—even as many as 25 wild dolphins at a time—for as long as the animals are inclined to linger. And nothing—not in Bimini, nor anyplace else—gets better than that.