Desert tents with gilded Louis XIV-style furniture in the desert and the grandeur and luxury that only a literal palace can provide: These are just a couple of the outstanding hotel perks and amenities unique to this part of the world. You can stay in a piece of Victorian-era history or in the style of a traditional Omani village—the properties in the Middle East offer experiences that are sure to transport you to another time while making you feel right at home.

Set right on quiet Tchernichovsky Street, best known for its eclectic mix of shops, private residences, and street-food joints, Hotel Saul has many of the trappings of a boutique hotel, with the youthful, design-centric feel of a contemporary co-working space. This small property occupies a converted office building that was re-imagined with sustainability in mind, with eco-friendly touches that include thermally insulated windows and energy-efficient water heating.

The aesthetic in rooms is bright and minimalist—but far from stark. While exposed brick walls and steel light fixtures give the spaces an industrial-chic feel, while plush rugs, large houseplants, and blush-hued throw blankets add a homey element. This homelike feeling extends to the common areas, notably the fourth-floor semi-enclosed balcony designed with digital nomads in mind, complete with work areas and a free espresso corner. There’s also a sundeck with shaded loungers for those who don’t feel like strolling over to popular Bugrashov Beach, around a 10-minute walk away.

by Margot Bigg
See all Hotels in This City

When dreaming of an Arabian Palace, Jumeirah Al Qasr is everything you might expect—Al Qasr literally translates to The Palace and is inspired in design by the folk tales of 1001 Arabian Nights. From the striking golden horses greeting visitors along the driveway to the five-ton Swarovski crystal chandelier in the foyer, the entrance alone is memorable. Arabian grandeur continues throughout, with ornate pillars and archways featured alongside gilded wood and pearl bedecked furnishings in even the standard rooms.

The hotel’s footprint is vast and the palatial building spills out onto beautifully manicured grounds before a mile-long stretch of the famed white sands of Jumeirah Beach. They’ve thought of it all too: You can take a dip in the huge pool, explore the quaint water canals of the resort, admire the iconic views of the nearby Burj Al Arab on an abra (a traditional wooden boat), sip cocktails on the sand over a private dinner, relax at the four-star luxury Talise spa, or spend a day or two on the waterslides at Wild Wadi Waterpark, access to which is included in your stay. As part of the wider Souk Madinat Jumeirah complex, you’re spoilt for choice when it comes to dining options at all ends of the scale with cuisines from all over the world.

by Lindsey Parry
See all Hotels in This City

All have spacious decks for taking in expansive views of the night sky, but for optimal stargazing, consider splurging for a glassed-in geodesic dome that lets you look up at the Milky Way without having to get out of bed. Lavish meals are served buffet-style in a gargantuan dome restaurant with marble floors and crystal chandeliers, though you may prefer to retreat for a hookah session in the cozy cave cafe, which offers low, colorful seating nooks built into a natural wall of tawny rock.

by Margot Bigg
See all Hotels in This City

If ever a hotel encapsulated the history and shifting fortunes of its country, it is surely The Palmyra in east Lebanon. Once a playground for international royalty and cultural icons, from Kaiser Wilhelm II and Archduke Franz Ferdinand to Einstein and Jean Cocteau, it has kept its doors open since 1874—refusing to close even when visitor numbers plummeted amid political turmoil.

Today it remains a hidden jewel of a hotel, overlooking the spectacular ancient Roman ruins of Heliopolis, 55 miles east of Lebanon’s capital Beirut. It has stayed true to its Victorian-era origins: a picture of faded grandeur, filled with antique furniture, archaeological relics, and framed photos of its former illustrious guests. Don’t expect mod cons, as the venue is more about historical character; rooms marked by tall stone walls are absent of phones and minibars and feature beguiling antique sconces and heavy velvet drapes—evocative of its bygone era. A neighboring annex has five bedrooms offering a more modern alternative for those who prefer that compromise, but most guests favor the unmatchable character in The Palmyra’s 17 old rooms. The front bedrooms overlooking the temple ruins are the pick of the bunch.

Only a two-hour drive from Dubai, Six Senses Zighy Bay lies on the Northern side of the Omani enclave of Musandam often hailed as “the Norway of the Middle East” owing to its breath-taking fjords. Situated in a remote location perched between the Al Hajar Mountains and a long sandy cove, the property invites you to choose your level of thrill prior to arrival, for the only way to reach the front doors is by 4×4 vehicle adeptly navigating the steep mountain pass, or by a short speedboat ride from a nearby port. For a real adrenaline rush—and flashy arrival—soar in over the mountains to the sands of Zighy Bay via paraglide.

As an ultra-luxurious all-villa resort designed in the style of a traditional Omani village, each of the 82 villas comes with its own private pool and garden, and all are surrounded by natural cobblestone walls for the utmost seclusion and privacy. Interiors featuring high ceilings are rustic in appearance yet chic and luxuriously decorated in locally sourced stylish neutrals with bright accents peppered throughout. Sustainability remains a priority in all respects; in addition to an on-site organic kitchen garden, the hotel also produces its own bottled water where little is wasted. Even the filtered-out salt is repurposed for use in the property’s grand saltwater swimming pool.

by Lindsey Parry
Related: These 12 Stunning Hotels Require Extreme Transport
See all Hotels in This City 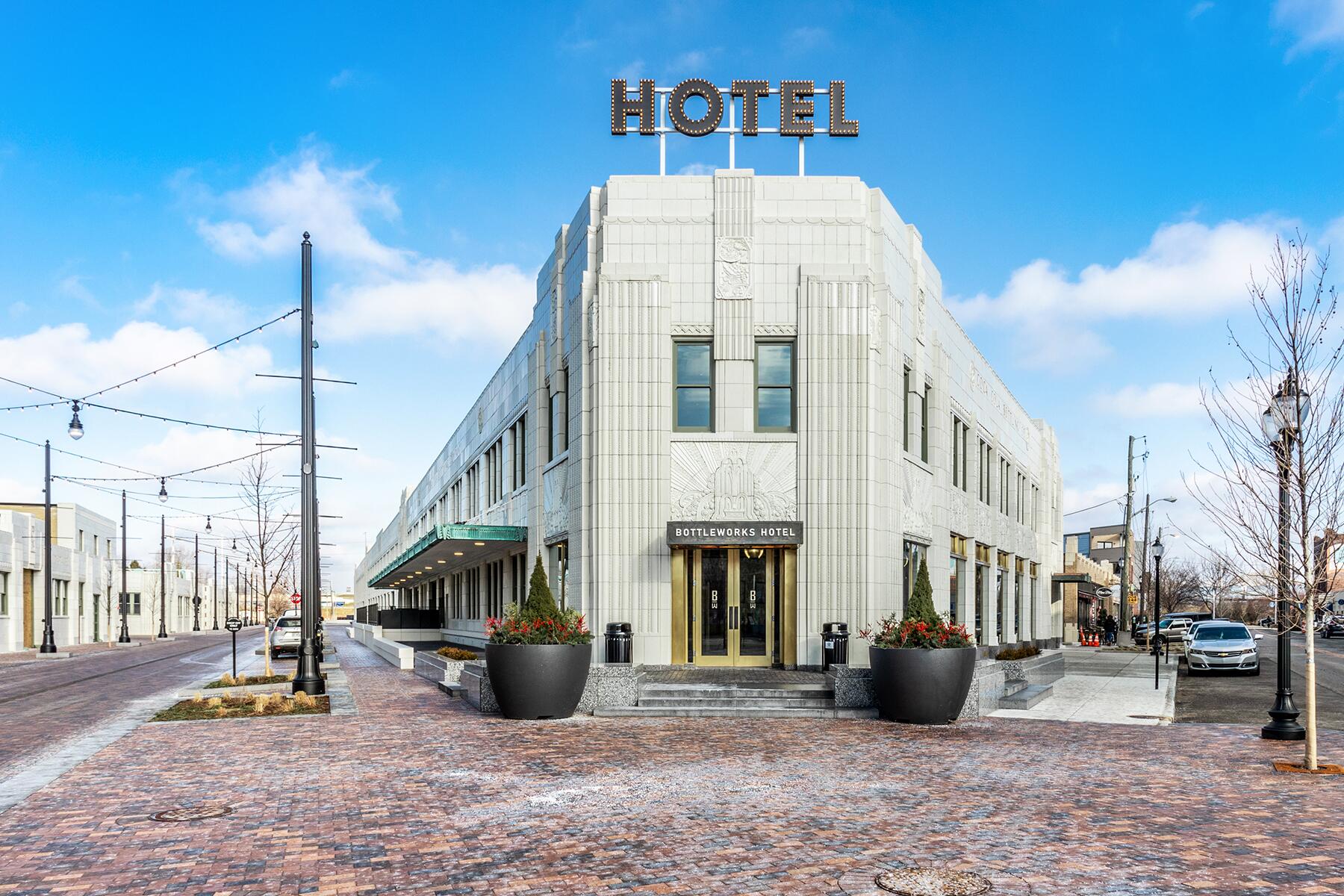 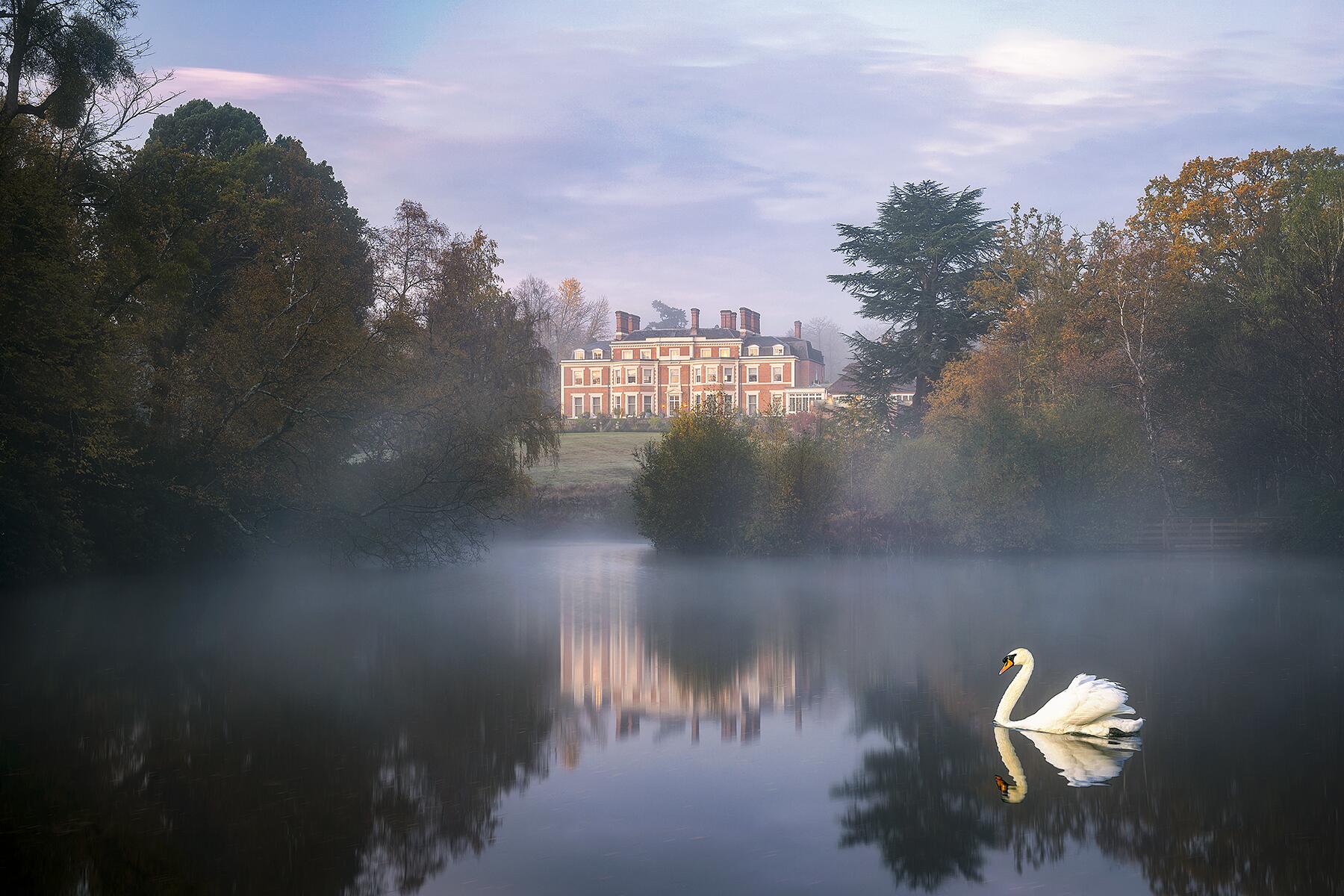 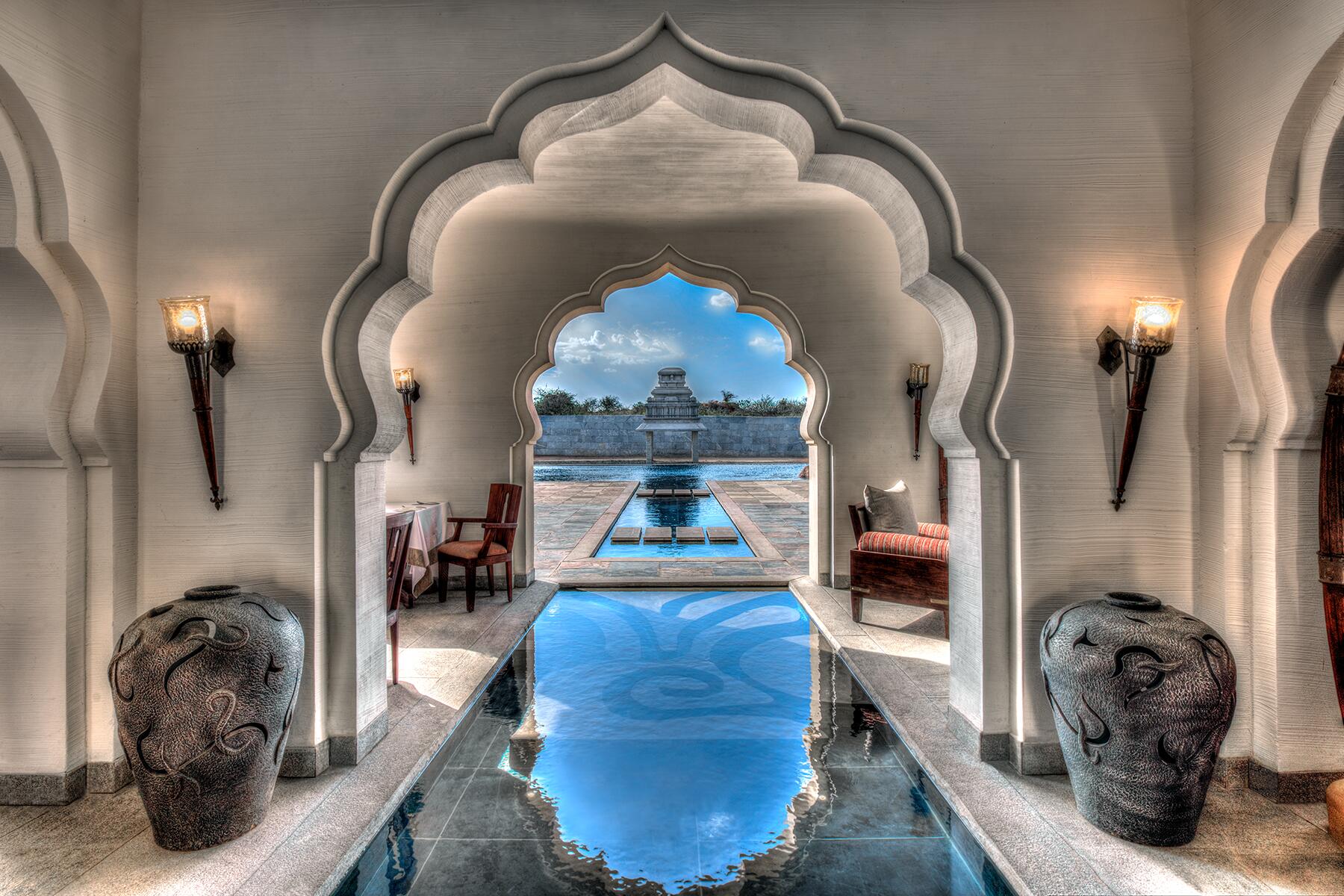 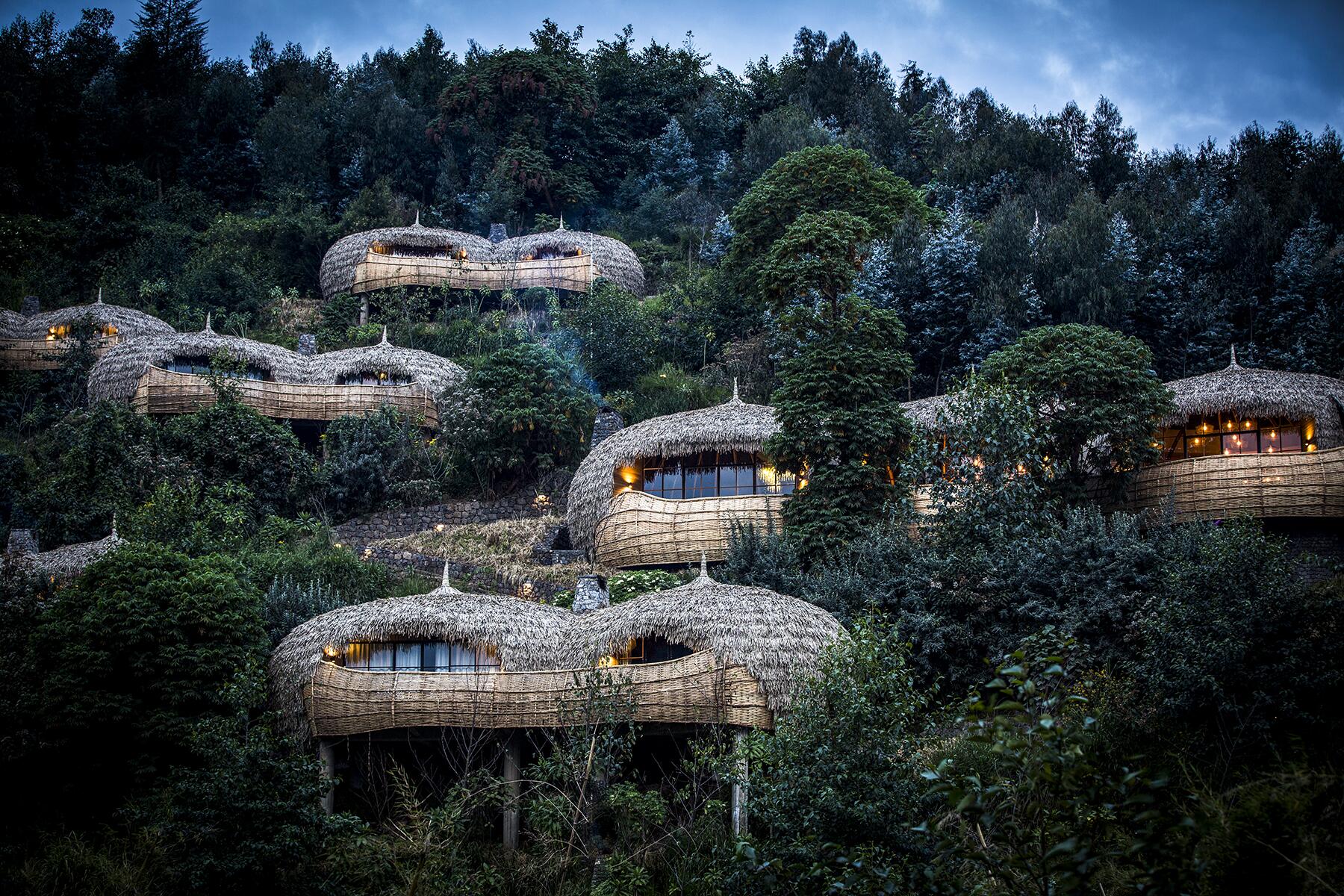