A scorned lover’s retaliation results in the city’s most mouthwatering tradition.

It all began with a woman’s revenge.

Culinary legend has it that Thornton Prince, a tall Nashville man with exceptionally handsome traits and a wandering eye to match, returned home to his lover a little too late one night in the 1930s. The next day, she sprinkled near-lethal amounts of peppers and spices on his beloved fried chicken, certain this would teach him a lesson. But to her surprise (and slight dismay) he begged for second helpings. The recipe was perfected, Prince’s Hot Chicken was opened, and almost 100 years later it remains a revered institution in Nashville.

“We don’t know who she was; he was married five times in the state archives so we can only imagine,” 72-year-old André Prince Jeffries tells Fodor’s. “It has to be attributed to a woman, though—a scorned woman. Have mercy!” Ms. Prince is the great niece of Thornton Prince and carries on the family’s hot chicken legacy with the help of her daughter Simone and their team of longtime employees.

INSIDER TIPMild is the wisest entry point for first-timers with a timid tongue.

What Is Hot Chicken, Exactly?

It all starts with a perfectly fried piece of chicken. “It has to be crispy, it has to be juicy, it has to have flavor,” 400 Degrees owner Aqui Hines explains. “You season flour with salt, pepper, and garlic and then from there once your fried chicken is complete you mix spices with hot oil.” These can range from paprika to jalapeño to cayenne and whatever other devilish ingredients you can handle. Once the mixture is finished it’s then poured over the chicken and served hot (in every sense of the word). Hot chicken is often placed on top of white bread to absorb the juices and alongside a few pickle slices.

It’s Getting Hot in Here

Ask anyone in Nashville and they’ll agree Prince’s is the pioneer of hot chicken but that doesn’t mean others aren’t getting in on “the feel-good burn” with mouthwatering variations. Head to East Nashville and you’ll come across Pepperfire and their signature dish offered at seven heat levels: The Tender Royale. “It’s a deep fried grilled cheese sandwich topped with chicken tenders,” owner Isaac Beard explains. 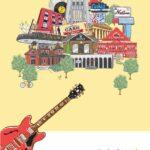 BUY THE BOOK
Fodor’s Inside Nashville

While you’re in the neighborhood, swing by Dino’s, a classic dive that’s been around since the 1970s. Order a serving of their Joe’s style fries (“our hot chicken spice blend on top of Velveeta fries with grilled onions and tartar sauce,” owner Alex Wendkos suggests). They’re now regarded as “Redneck Poutine” thanks to patron Anthony Bourdain who came up with the name while filming his No Reservations Nashville episode.

Despite its early beginnings, hot chicken has experienced a viral response in recent years. Timothy Charles Davis, the author of Hot Chicken Cookbook: The Fiery History & Red-Hot Recipes of Nashville’s Beloved Bird chalks this up to a few key phenomena.

The first being the ravenous nature of food media.”It’s an experience food—unlike something like kale that was having a moment a few years ago [laughs] there’s something about hot chicken that lends itself to social media posts and videos of people having reactions,” says Davis. “It’s an exciting food.”

Then there’s its mysterious backstory. There are few (if any) other iconic American dishes that stem from a tale of a scorned lover, which makes indulging in hot chicken feel like you’re partaking in a slice of salaciously delicious history.

Hot chicken also happens to coincide with the Slow Food Movement. “I think there’s something that people weirdly enough crave about having to wait for their food,” Davis says. “In this age of artisanal small-batch things the fact that [you can be waiting] for two hours [is pretty unique.]”

Another catalyst is Nashville’s being a newly minted as an “It” city. Around 2012 Nashville began to be included in round-ups of must-visit cities to include on your travel bucket lists. “I think with the city rising it was only natural that hot chicken tagged along with it.”

What to Eat With Heat

As far as hot chicken accompaniments go, traditional southern sides (or “meat and threes”) are the best choice. Macaroni and cheese, collared greens, black-eyed peas, and crinkle fries. “Some places even have spaghetti on the side,” Davis says. “It’s a southern thing. Sometimes it’s barbecue spaghetti.” To help cut the spice you might head to 400 Degrees for their baked beans. “My beans qualify as candy,” owner Aqui Hines laughs. “I put like a can of Karo syrup and a whole pack of brown sugar in and I cook them for an hour at 400 degrees to get it caramelized. The beans do help with the heat!”

“Everyone has a response to hot chicken and I guess that’s why it’s been around for as long as it has been,” André Prince Jeffries explains. It seems as though anyone you encounter from Nashville has an anecdote about the fiery dish. Prince’s recently hosted a Hot Chicken Confessions night where André heard from customers about how the dish has affected their lives. “One lady gave a testimony that it was helping heal her ulcers. Some people eat it for their allergies. One person even said it healed their long-term hiccups! Most everyone has a story.”