Rooms at the Palms are large, opulent, and modern, with some unusual amenities for Las Vegas, such as beds with ultra-firm mattresses, duvets, and ample minibars. The property's various classes of suites are far more elaborate (our favorite suites, the Sky Villas, feature private hot tubs cantilevered over the edge of the building). The Fantasy Tower has two "Party Floors," which include additional suites, and a recording studio for bands or pop stars who want to mix business with pleasure. On the main casino floor, a center bar, named Social, offers more than 50 unique labels, single malts, and limited-edition bourbons. For a tamer Palms experience, ask for a room at Palms Place, which has a private pool and separate restaurant.

Located off-Strip, the Palms Casino resort charms with modern rooms, trendy restaurants and an outstanding concert venue that hosts entertainers of all genres. Rooms range from standard to opulent villas featuring glass-enclosed pools that jut out and overlook the Strip. 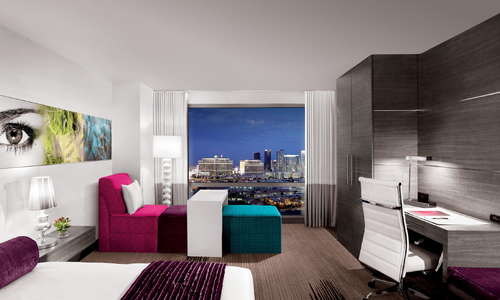 The Palms has grown from a party scene in the early aughts to a more mature modern resort, one that prizes sophistication over flash. Check out the sexy Rojo Lounge, with its red-lit bar, vinyl booths, and swanky décor. It is everything Palms is and more.

YOU SHOULD KNOW While the Palms’ heyday was more than a decade ago when celebrities flocked to its clubs and it gained notoriety as the setting for MTV’s The Real World, it’s lost some of its cool factor in the first part of this decade. However, it’s on the upswing again, with ownership changes and the introduction of new restaurants and features.

Hop next door to Palms’ sister property, Palms Place, for the pool. Located on the sixth floor, it’s a 50,000-square-foot oasis with waterfalls, stone gardens, a Jacuzzi, a stone fireplace and tropical flowers. 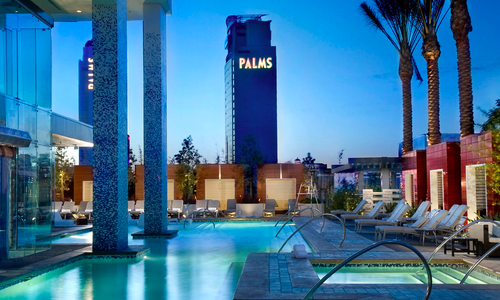 With 20 treatment rooms and an extensive list of services, Drift Spa and Hammam will get you relaxed and rejuvenated in no time.

The AYCE Buffet recently debuted, and Lucky Penny takes the 24-hour diner to a new level. But the Palms’ crown jewel is Nove Italiano, located on the 51st floor of the Fantasy Tower. The views are spectacular, yes, but the food even more so.

The Pearl Concert Theater is one of the best venues in town for live music, with unobstructed views and excellent acoustics. Upcoming shows in 2018 include Vance Joy, Haim and Alanis Morissette.

If you’re more of a sports fan, grab a beer at Tonic Bar while watching a game. Higher up, enjoy a cocktail at The View, with its Philippe Starck baccarat crystal chandeliers glittering in the night.

One of the best happy hours in town is at Nove Italiano, where you can enjoy the view without committing for dinner. During happy hour, enjoy $9 dishes and the expansive wine and cocktail list.

The Palms is not within walking distance of the Strip. There’s a free shuttle service to Caesars Palace, but otherwise, you’ll need a car to get around.

Pay homage to the tiki gods at Golden Tiki (5-minute drive). The Whisky Attic (4-minute drive) claims to have the largest collection of whisky in America.

The Palms is a nice alternative to the craziness of Strip properties. While not necessarily as hip as, say, The Cosmopolitan, it offers something for both tourists and locals alike. 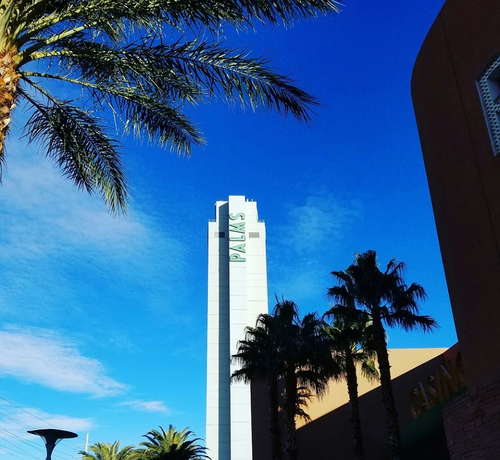 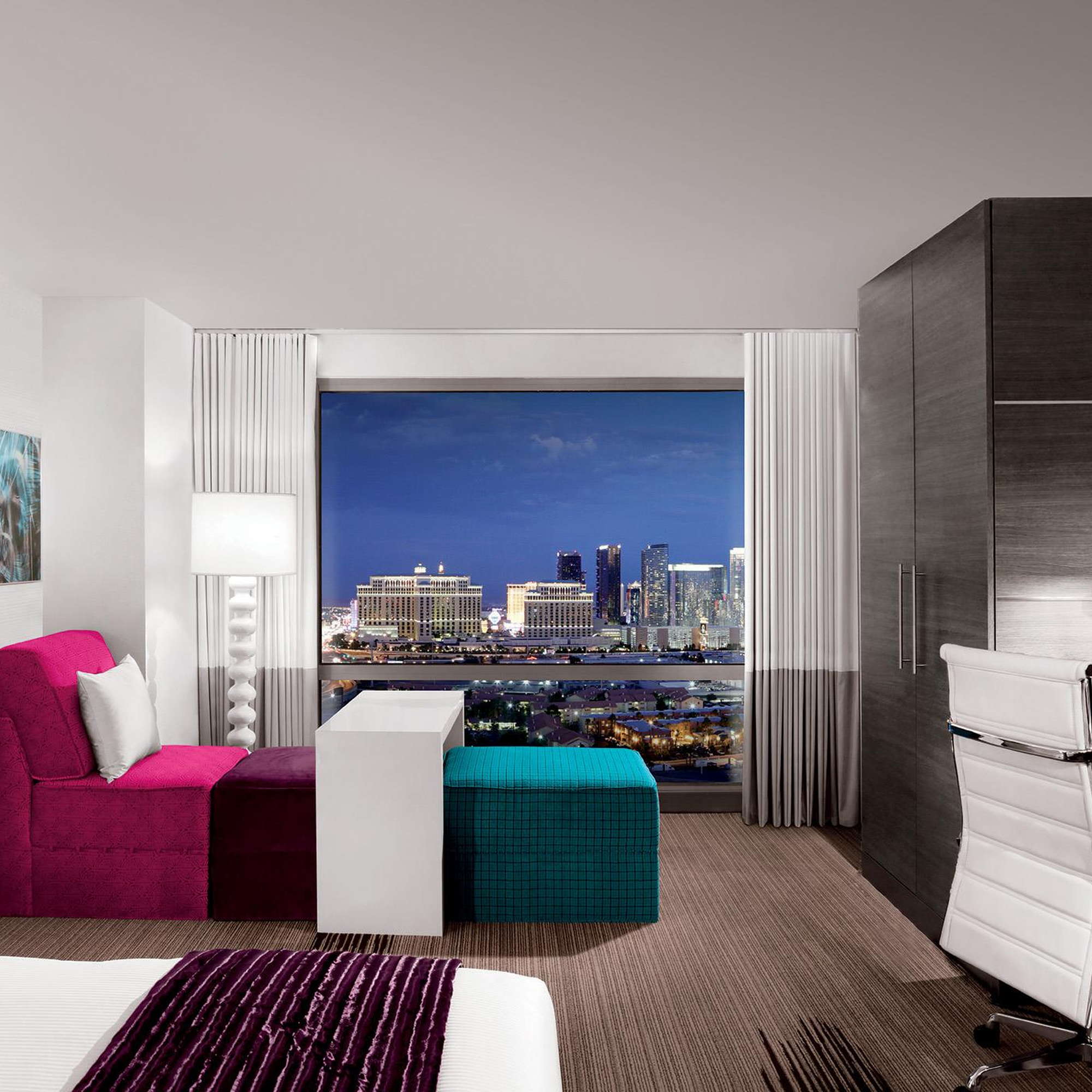 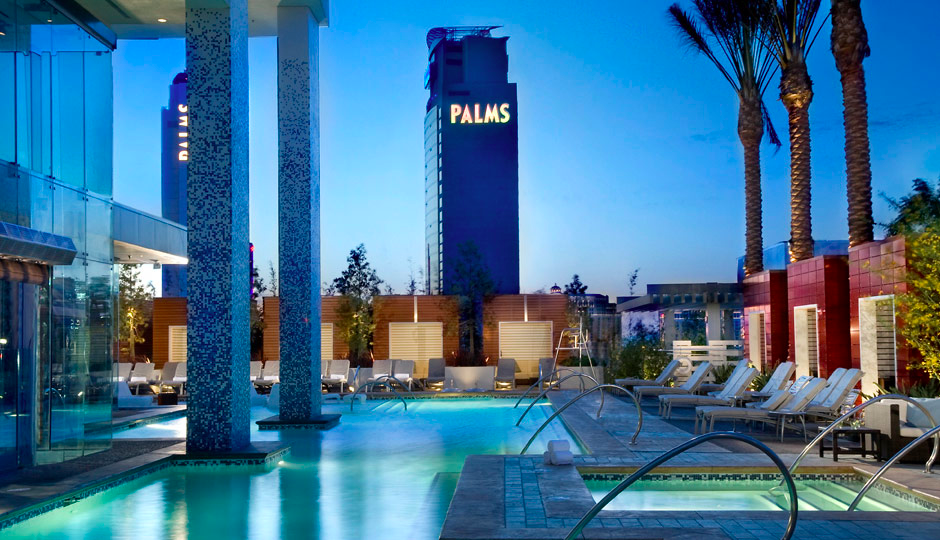