An hour south of St. Louis, you’ll find the small town of Bonne Terre. Driving through, it might seem unassuming—a typical stretch of houses, shops and eateries. But nestled among them is a small building with arresting red letters on its sign that read, “Bonne Terre Mine Tours.” And below that, there’s a whole underground, underwater world to explore.

Bonne Terre Mine is one of the world’s largest man-made caverns, sprawling out underneath the town. Formed over a century ago, it’s a pivotal site in mining history. When the mine closed in 1962, water flooded through the hundreds of feet of passageways, drowning equipment and seemingly freezing the cavern in time. Now, Bonne Terre Mine has opened to the public and, yes, you can actually dive through the gigantic underwater caves. With passageways, a “Billion Gallon Lake,” abandoned equipment and even underwater offices, adventurers get the chance to dive into a magnificently unique environment.

Doug Goergens, who co-owns Bonne Terre Mine with his wife Catherine, told Fodor’s, “It’s like its own beautiful, alien world… like something from the movie Journey to the Centre of the Earth. 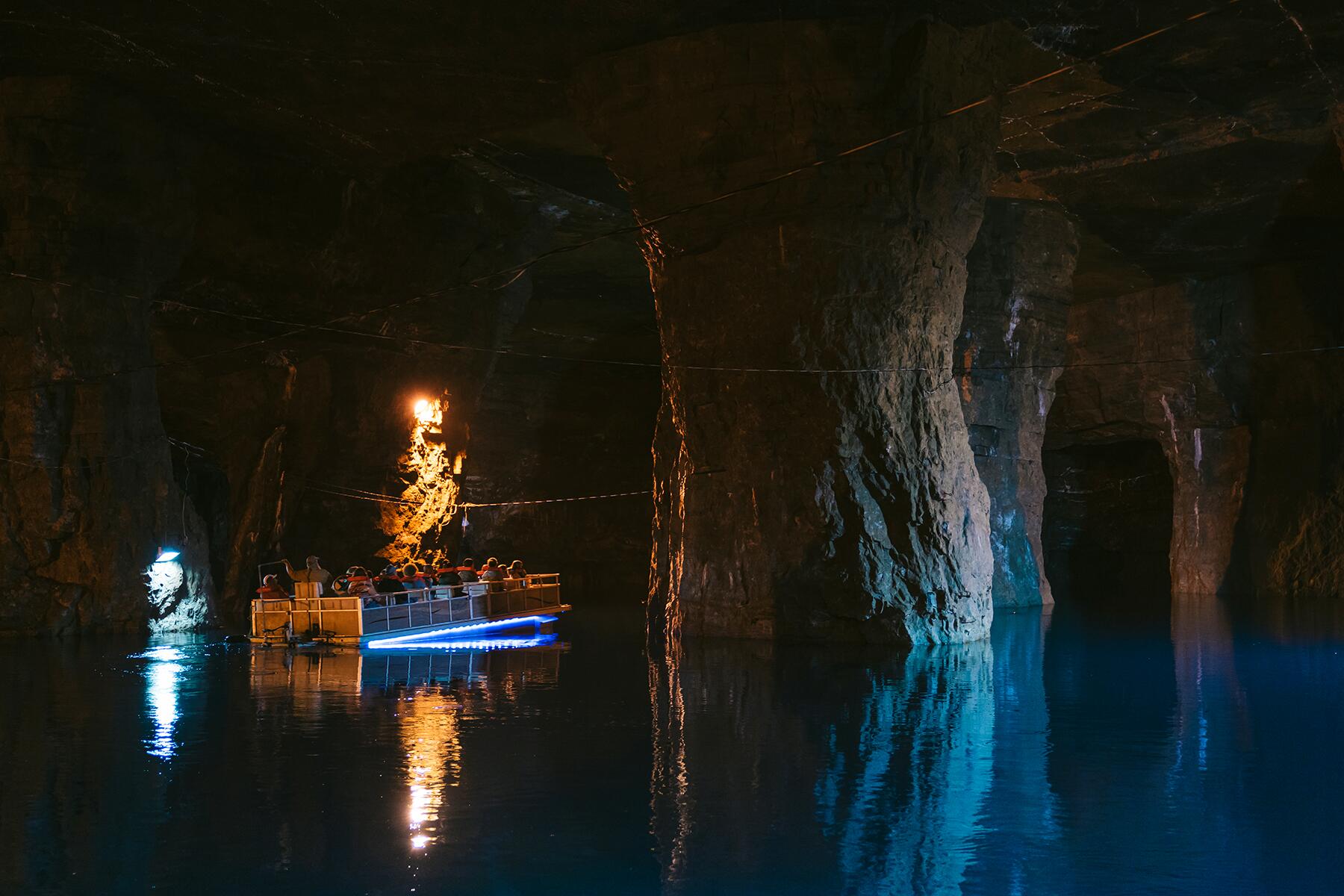 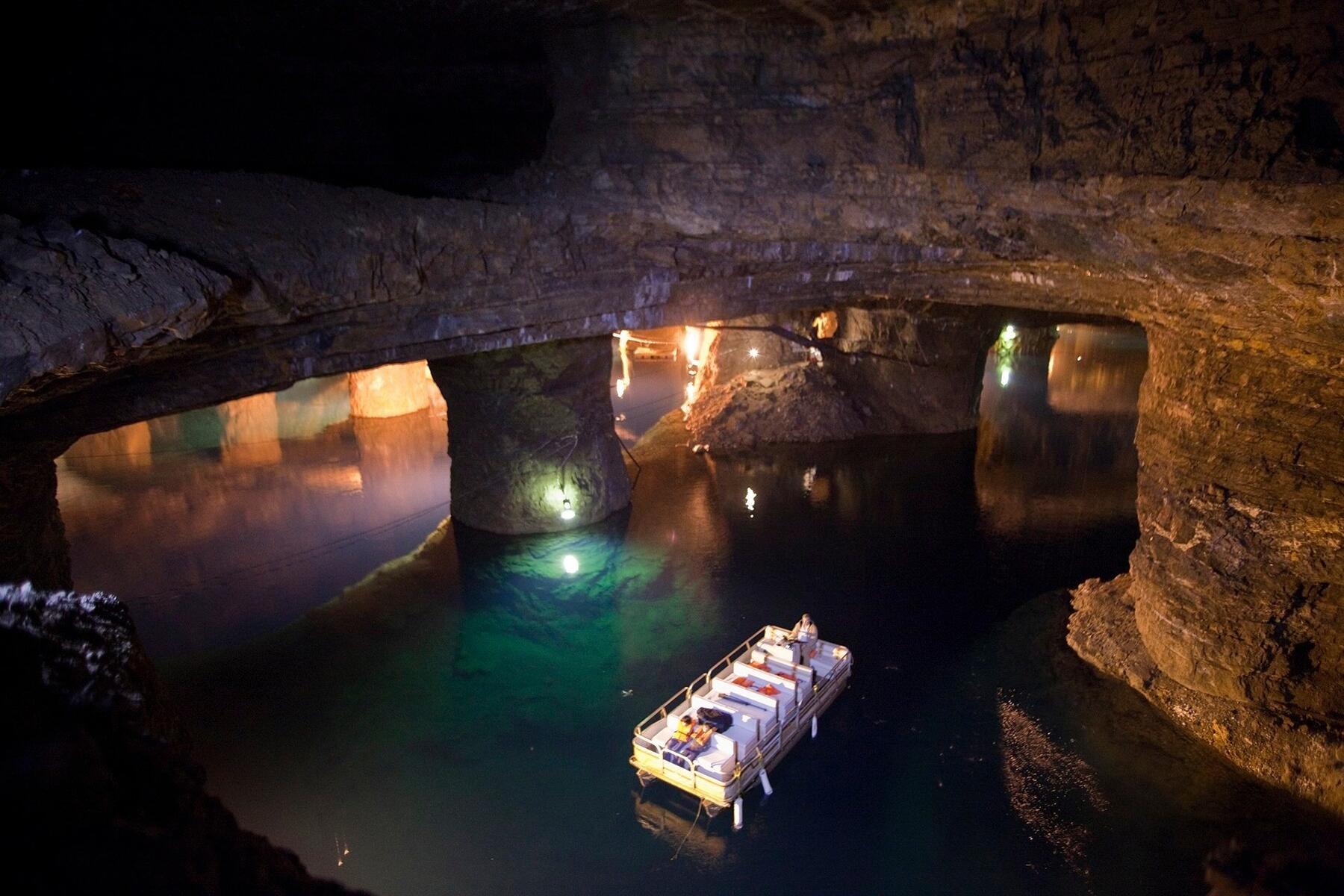 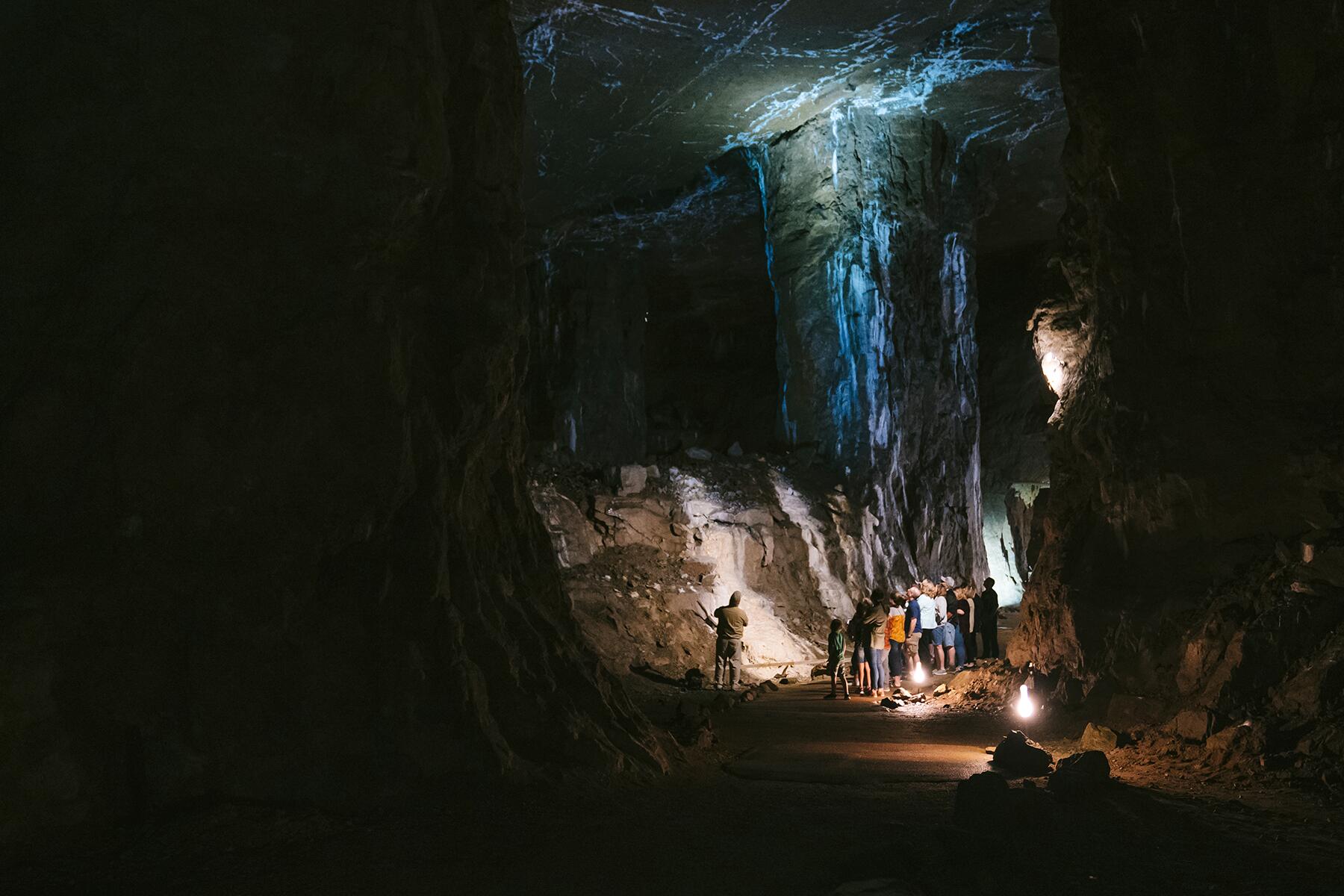 “Divers get to an area we call ‘The City’, about 80-100 feet deep, and cruise past buildings with doors, with glass still in the windows… A machine shop, repair shop, corrals of the mules that worked. There’s even an old cast iron drinking fountain, underwater, outside one of the old offices. It’s like you’re going down a street in an old Western town. You’re imagining the activity at that time but no one is home. It feels like you’ve got into a time machine.”

So how did this underwater world form?

In the 1720s, French settlers discovered lead in Bonne Terre—hence the city’s name which translates to “good earth.” Miners began digging through rock for lead in the 1860s. Using only hand tools, they created the five-level “room-and-pillar” cave system which is over 457,000 square feet, with 17 miles of shoreline. The main room is large enough for a 20-story building to stand inside. Offices and a rail system were built underground, so workers didn’t have to come in and out to do admin. There was a whole constructed world operating mostly unseen beneath Bonne Terre.

“Divers get to an area we call ‘The City’… and cruise past buildings with doors, with glass still in the windows… A machine shop, repair shop, corrals of the mules that worked. There’s even an old cast iron drinking fountain… It’s like you’re going down a street in an old Western town. You’re imagining the activity at that time but no one is home. It feels like you’ve got into a time machine.”

After almost 100 years, the mine’s lead ran out and it closed. “When they abandoned the mine, the method of mining had already become obsolete but the architecture of the mine did not lend itself to bringing in modern heavy equipment,” Doug explains. It would have been so difficult to get all the equipment above ground, it was simply left.

That was when the water pumps, which had been installed to stop groundwater flowing into the mine, were switched off. Water poured in and gradually rose until the bottom three levels of the five-story mine were completely flooded, drowning the passageways and everything left behind. By the 1970s, a huge lake had formed underground. It grew and grew, earning the nickname Billion Gallon Lake. Doug calls it “an underground sea,” as lakes sit above that are smaller than the mine’s.

It was in the 1970s when Doug and Catherine bought the abandoned mine and began developing it for public tours and, eventually, diving.

Bonne Terre Mine is now one of the top diving destinations in the U.S. and across the world, with many keen divers visiting as a bucket-list trip. Its fresh mineral water ensures over 100 feet of visibility and a constant year-round water temperature of 58 degrees make it unique. The water is lit by 500,000 watts of stadium lighting, turning it a dazzling electric blue. Look up from an underwater spot in the Billion Gallon Lake and see other divers silhouetted in color as clouds of bubbles rise up. The crew call the experience “deep-earth diving.” 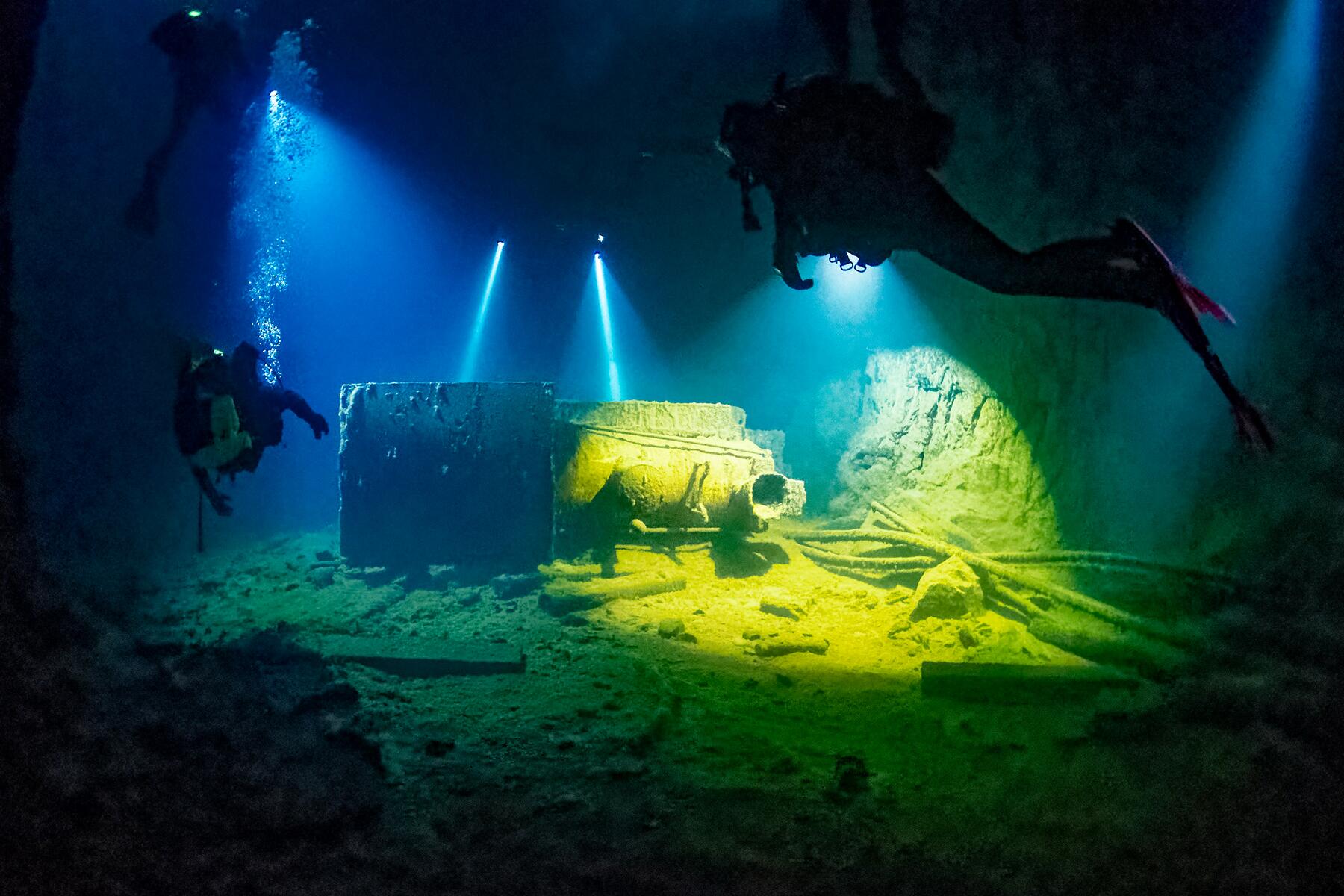 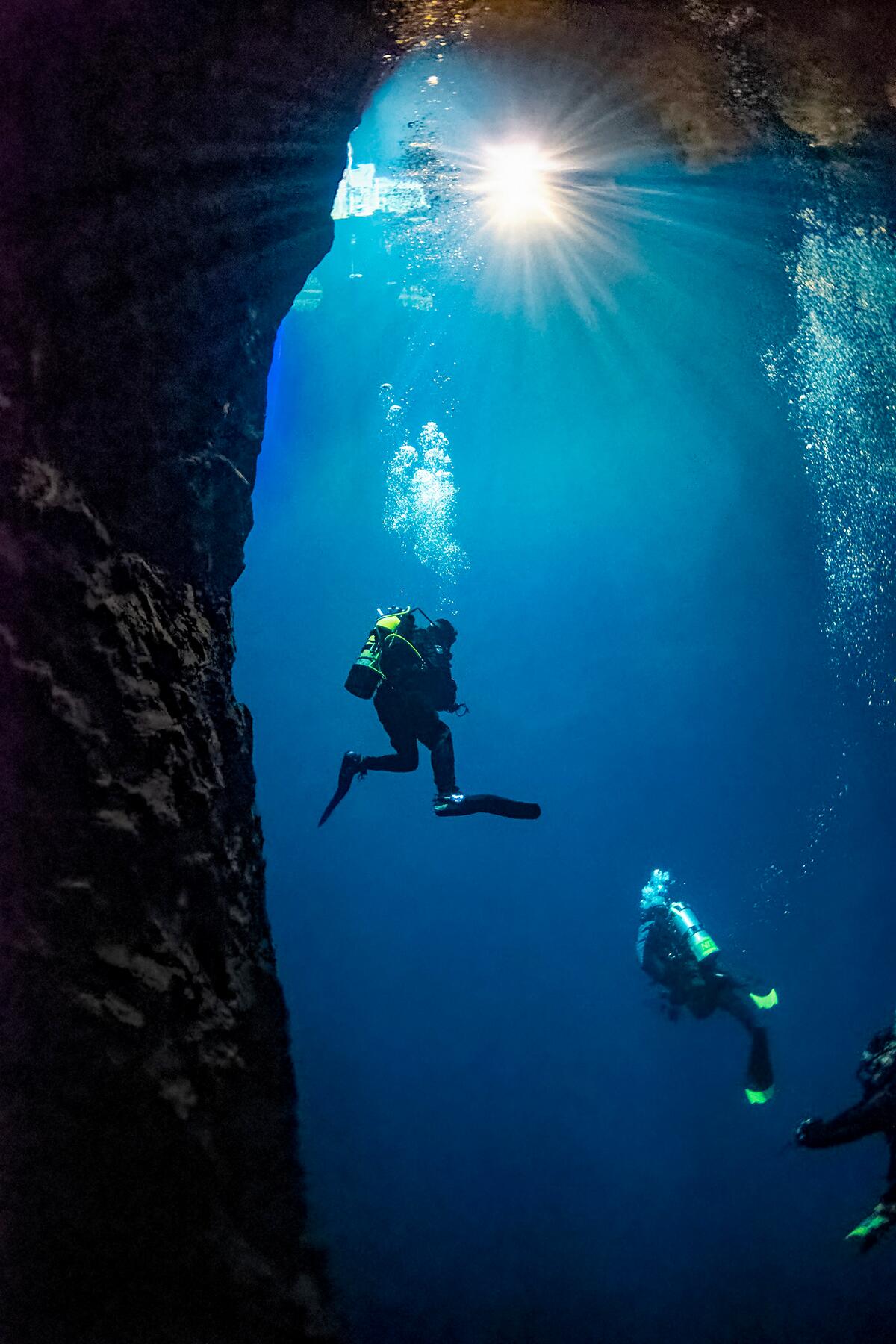 West End Diving—one of the oldest diving centers in the U.S.—have developed 50 diving trails through the mine. Trained instructors lead groups of 10 certified divers to explore the mine, from The City of underground offices to the submerged elevator shaft. As you dive through archways and past pillars, you’ll spot abandoned mining equipment sitting at the bottom (there’s even a locomotive down there!) and the sparkling calcium falls, cascading down the rocky walls.

Visitors enter through the “mule entrance” into a space filled with rusted mining equipment. Sixty-five steps lined with golden lamps lead down into the mine. “You enter the mine at 125-130 feet and it opens up like a huge auditorium,” Doug says “Imagine a great indoor domed stadium, illuminated. You walk through to the Billion Gallon Lake and the giant wooden dock sitting on it. You’ll see giant pillars that look like the legs of dinosaurs. Then you look down and see the water is crystal-clear blue mineral water.”

There’s more than just diving tours, too. Silent boats of tourists stream through 17 miles of clear water, while walkways rise above the lake so visitors can view the impressive characteristics of this enormous underworld. A guide, torch in hand, explains the history of the mine as you go.

Over the years, Bonne Terre Mine has seen lots of excitement, including being part of filming for select scenes in The Abyss and the Red Bull Death Charge where wakeboard competitors whizzed through the mine. One standout experience was a visit from Jack Cousteau, a French naval officer, conservationist, and famous marine explorer whose nickname was “the father of scuba diving.” Jack planned to spend half a day filming for a story but, after viewing the mine, he and his crew chose to stay for five-and-a-half days.

Doug recalls, ”Jack asked me, ‘What will you do to further develop the mine?’ I said, ‘I’m thinking of putting some fish in there, feeding stations.’ He said, ‘No, you cannot do that! Man adulterated the earth. He mined it, he destroyed it. Mother Nature has reclaimed it. She’s created a very sanitized, beautiful, perfect ecosystem down there. You don’t want to disturb it.’”

Doug followed Jack’s word and left the mine to flourish in its natural wonder (though he did introduce two fish to the mine for a little extra fun). Next time you’re diving in this one-of-a-kind, underwater world, see if you can spot them. They’re just two of the many marvelous hidden secrets in the depths of Missouri’s incomparable Bonne Terre Mine.