“I think one ‘wow’ factor at this hotel will be right as guests walk in,” says Mali Carow, general manager of the Four Seasons Hotel & Private Residences New Orleans. “You enter the hotel directly into our Chandelier Bar, where thousands of crystals are hung to take on the shape of a massive chandelier. All of the building’s original marble has been repurposed and maintained. It’s that Four Seasons iconic welcome outside, but for New Orleans––to walk into a lobby, where there is a bar, so active and lively––it’s perfect for this town.”

Set to open later this summer, this Four Seasons property will be the city’s first-ever resort hotel, located in the historic World Trade Center right on the bank of the Mississippi River.

Just steps from the French Quarter, in the Central Business District, the World Trade Center building dates back to 1968, debuting to commemorate the 250th anniversary of the city. It was designed by acclaimed modernist architect Edward Durell Stone, whose work also included the Kennedy Center for the Performing Arts, Radio City Music Hall, and the Museum of Modern Art in New York City.

When it debuted in 1968, it was the tallest building in New Orleans at the time. Sadly, by 2011 it sat empty. By 2013, it was on the city’s Top 10 list of Most Endangered Places and, although added to the National Historic Register in 2014, “it wasn’t being kept up at all,” offers Carow.

“However, I think that speaks to the original strength in design, because the old beauty was still there,” she says. “We were able to keep those old escalators, the marble, and the giant pillars. They just needed a polish.”

The $500-million transformation, overseen by CambridgeSeven, has certainly added polish. The 341-room, 92-residence property will be decorated in local, commissioned artwork, with white shiplap walls in the rooms, river and city views, stocked custom minibars, and Carrara marble bathrooms. The luxury suites will encompass 2,400-plus feet of living space.

At every turn, there is the Four Seasons reputation for exceptional service, counterbalanced with the tastes, sounds, emotions, and culture so intrinsic to New Orleans.

Guests arrive at the aforementioned Chandelier Bar, right in the center of the lobby, with the show-stopping art installation, where 15,000 pendeloque and almond-shaped crystals are illuminated, each sourced from the Czech Republic. The physical, u-shaped bar will have 22 seats, with ample room for locals and guests to stroll up and sip.

The cocktails come courtesy of a program devised by Hadi Ktiri, formerly of Arnaud’s and Couvant in the city, who will also give input to the menus of the property’s three other bar concepts and room service. 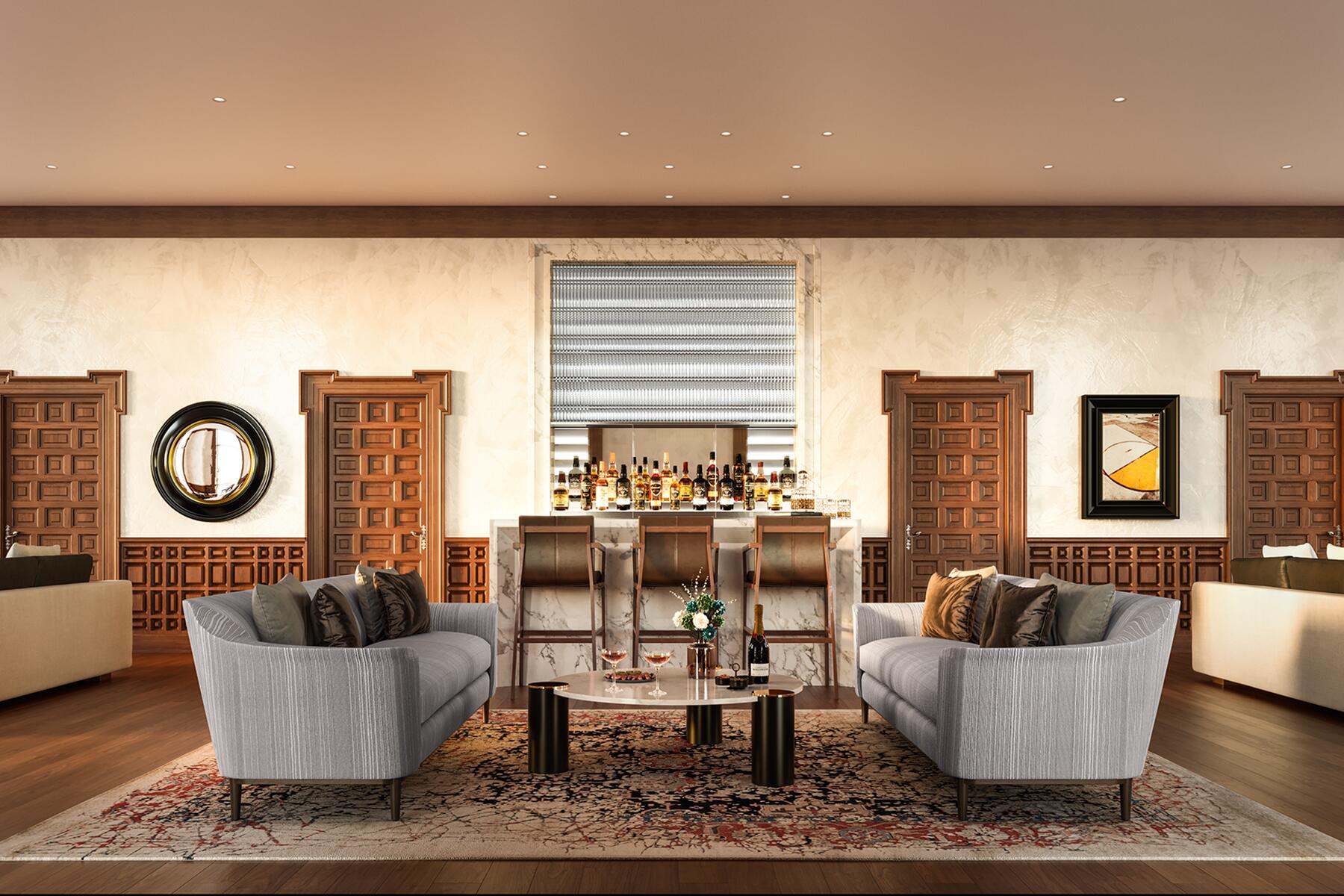 “We have so many classics invented here,” Ktiri says, “and we want to honor those recipes. The concept at Chandelier Bar to take every New Orleans classic and strip it down to its purest form. We will use the highest quality ingredients we can find, to execute them at a perfect level. I was thinking a lot about the business traveler. If you are here for only one day, and you are in meetings the majority of the time, I want you to be able to stay on property and not feel like you are missing any part of New Orleans.”

That idea to bring the city into the hotel will also play out in service. Carow has been discussing what it means to be “from New Orleans” with her staff, and she’s eager for them to pass that emotion on to visitors. From Second Line performances in the lobby to Game Day events during Saints season to spa treatments that help you recover if you partied a bit too hard on Bourbon Street, this hotel takes its host city into consideration at every turn.

Acclaimed local restauranteur/chefs Alon Shaya and Donald Link will open two restaurants on the property. From Chef/Partner Alon Shaya, the concept of Miss River will honor Louisiana’s finest seafood, meat, and produce, with twists on classic recipes. There will also be “a sommelier station in the center of Miss River,” says Shaya. “We want guests to be able to get up, go to the station and chat with the sommelier about Champagne or Pinot Noir; to refill a glass or try something new. Our chef’s counter, which is a large, beautiful kitchen cooking station in the dining room, is our modern answer to tableside dining, showcasing the theater of it all. There will be, for example, a whole fried chicken done tableside. It’s then brought to carving station, where it’s finished and plated.”

Sugar-dusted beignets, Gulf-caught tuna, and sugarcane lacquered smoked duck will also make the menu, which Shaya says is a culmination of a place that he’s called home for 20 years.

“I feel like this is the missing piece for me as a chef,” he says. “At my other place [Saba on upper Magazine Street], I cook Israeli food. That’s my cultural history, but to be able to cook Louisiana’s food was something I’ve wanted for a long, long time.”

Guests will also be able to drink and dine at a yet-to-be-named concept by Donald Link, famed for his city restaurants Cochon, Peche, Herbsaint, Gianna, Butcher, and La Boulangerie. That restaurant will be on the fifth floor, with incredible floor-to-ceiling windows out to the pool—a pool that will also be a newcomer to the city. It’s the first resort-styled swimming pool in New Orleans––a place where inviting swimming pools are practically a competitive sport. 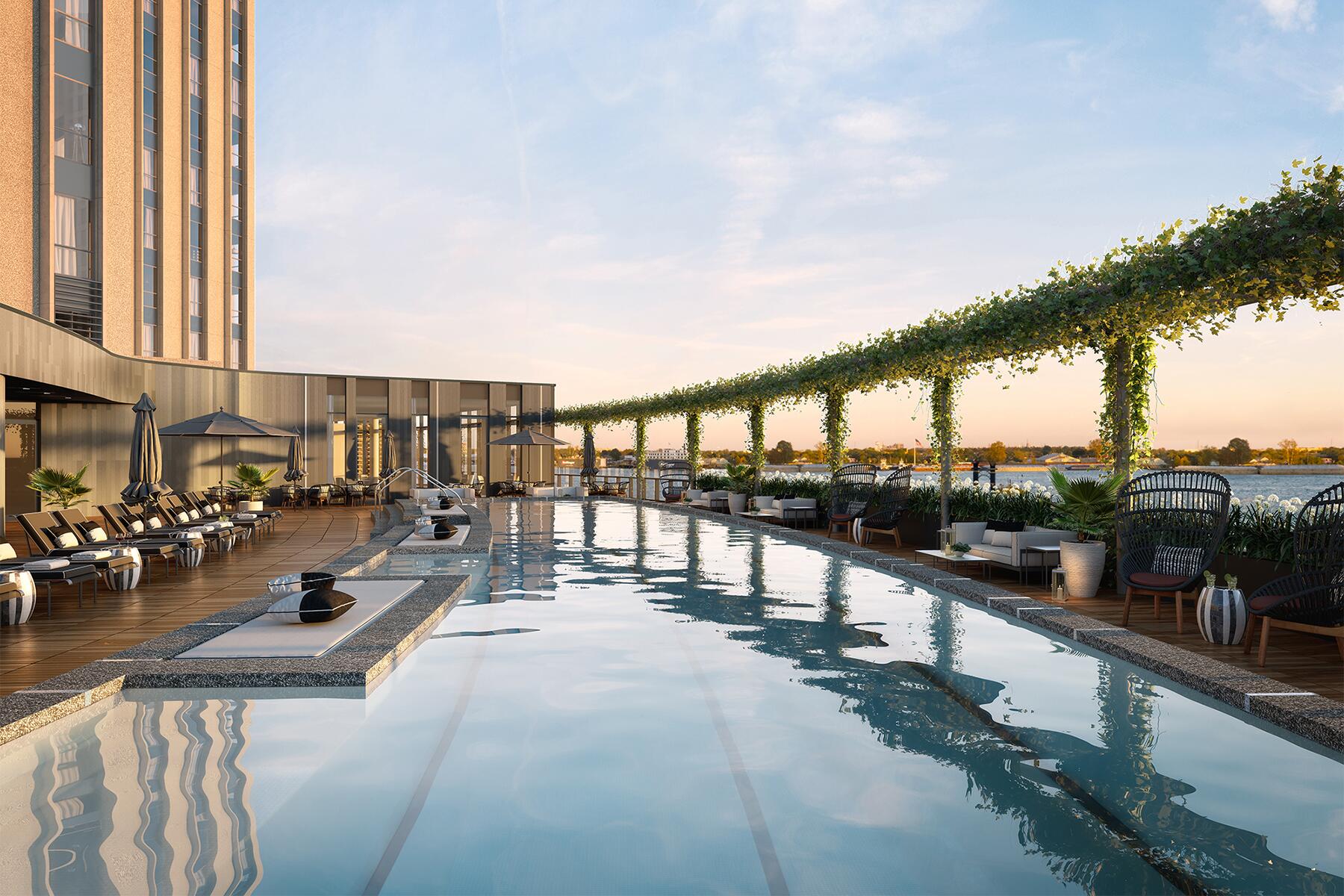 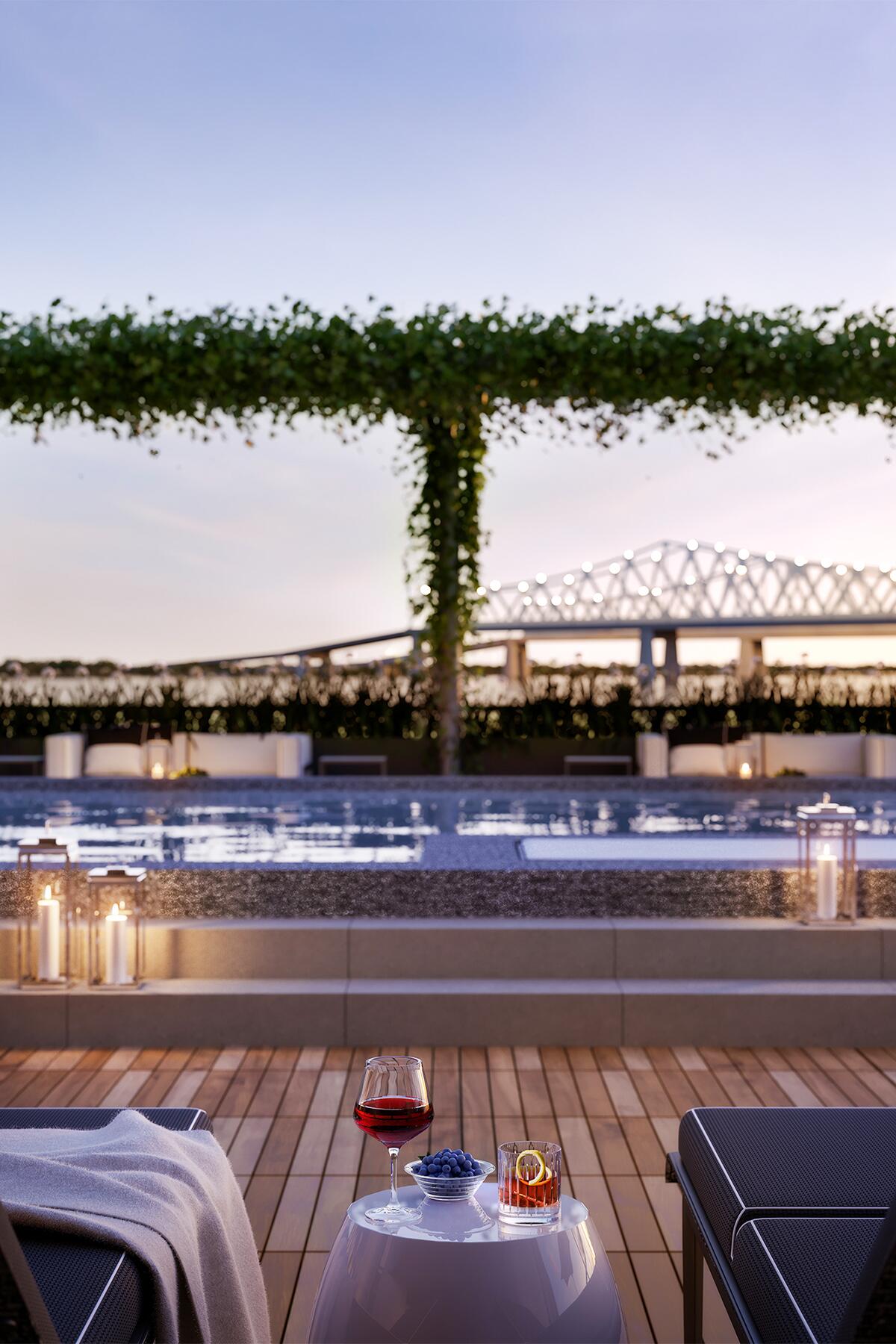 “The coolest part is the way they designed it,” says Carow. “It’s a crescent shape, to mimic the river. There are no straight lines, and as long as it’s daylight outside, you can get direct sun. Then, on our outdoor deck, there will be chaise and conversation seating. Chef/Partner Donald Link is working on the menu there too, with input from Hadi on the drinks.”

It’s likely going to be that spirit of “input” that shines brightest at the new Four Seasons property. Each team member has put their own personal stamp on the idea of service. “We have all been working together these last many months to really put the finishing touches on each space,” says Hadi Ktiri. “I cannot wait for everyone to see it. I think it’s going to be a hotel that wows guests, but also appeals to locals. I think we are going to be a destination within the city.”

What are they doing with the (formerly) revolving space at the top? Hopefully they are restoring that as well?