♫Santa Claus is always in town!♫

There’s a small town in southwest Indiana with Santa statues outside practically every business in town, a main thoroughfare called Christmas Boulevard, and a grocery store called Holiday Foods. There’s also a post office where you can write letters to Santa any time of year and a theme park called Holiday World with lands dedicated to major U.S. holidays like Thanksgiving, 4th of July, and, unsurprisingly, Christmas.

What’s even more remarkable is that it’s all there completely by accident.

The town was originally called Santa Fe, but when townspeople applied for a post office, the application was rejected due to a naming dispute with the already established town of Santa Fe, Indiana.

According to local legend, a town meeting was held on Christmas Eve to decide on a new name. During the meeting, the doors to the building blew open and the sound of sleigh bells could be heard outside. Thinking it was Santa, the children began to exclaim, “Santa Claus! Santa Claus!” and the name stuck.

The name has since inspired just about every restaurant, shop, and attraction in the small town of Santa Claus, Indiana. As a theme park enthusiast who lives only about an hour away from Santa Claus, I’ve made quite a few trips to Holiday World, but I had never visited “America’s Christmas Hometown” during the winter months until recently.

Turns out, a town that celebrates the holidays all year long is hands down the jolliest place to kick off the actual holiday season.

With my husband and a bunch of kids in tow (three of our own and a friend who joined us on our adventure), we headed west on I-64 and straight to the sweetest spot in town–Santa’s Candy Castle.

From old-fashioned candies like Necco Wafers to obscure sweets like tequila-flavored lollipops with actual worms inside, Santa’s Candy Castle has an astounding selection of treats. There are entire rooms devoted to Pez dispensers and Jelly Belly candies, and we stocked up on our fair share of all of the above. 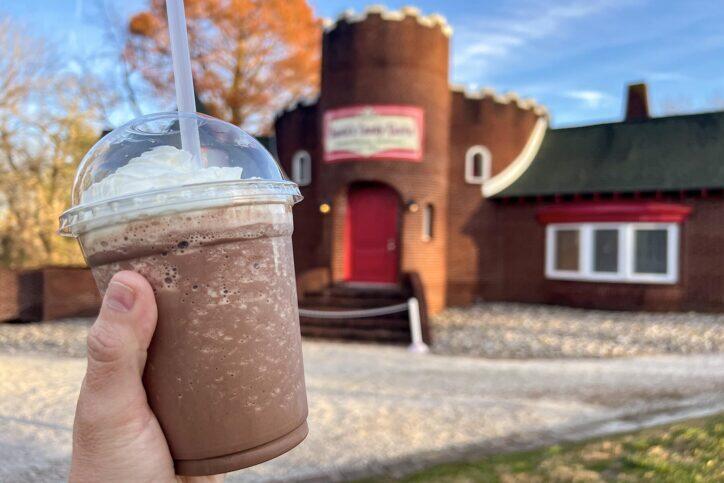 The treat I couldn’t leave Santa’s Candy Castle without, though, isn’t actually candy. It’s a frozen hot chocolate concoction topped with whipped cream that I dream about between visits. It was a little chilly outside for frozen drinks, but it was well worth the extra shivers. They have 35 flavors of steaming hot cocoa, as well, if you prefer something warmer.

A team of volunteer “elves” continues the tradition today, and every letter written to Santa at the little wooden desks inside the original post office, along with any that are mailed in, receives an answer from Santa himself. Our children took the task of choosing what to add to their lists very seriously and a friendly elf helped my five-year-old, who can write his name but not much else.

They dropped their letters in the mailbox and rang the sleigh bells, signaling to the elves that there was a letter for Santa, and we ran up the hill to see the town’s largest Santa statue. The 22-foot Santa was built in 1935 and appears to be watching over the town.

Behind the post office, there is also a Santa Claus Museum where you can learn more about the history of the town and how it came to be such a popular tourist spot. 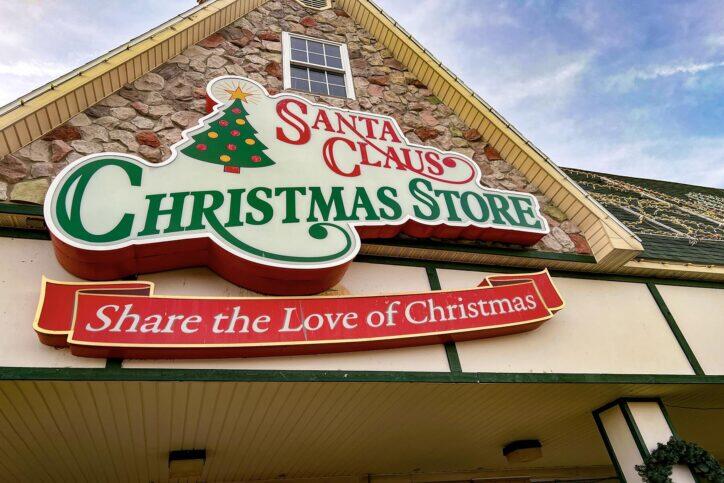 We did a little shopping at the Santa Claus Christmas Store (they have ornaments for almost every hobby, occupation, or miscellaneous trait), and then it was time for dinner. Though Holiday World closes after Halloween for winter, they opened their Christmas-themed restaurant as an all-you-can-eat buffet to feed the hungry holiday crowds that flock to town this time of year.

We sat down to a meal of Holiday World favorites like macaroni and cheese, pizza, and their famous “wiggly not floppy” green beans. There were even cookie decorating kits for the kids along with lots of Christmas merchandise and flavored fudge available for purchase. 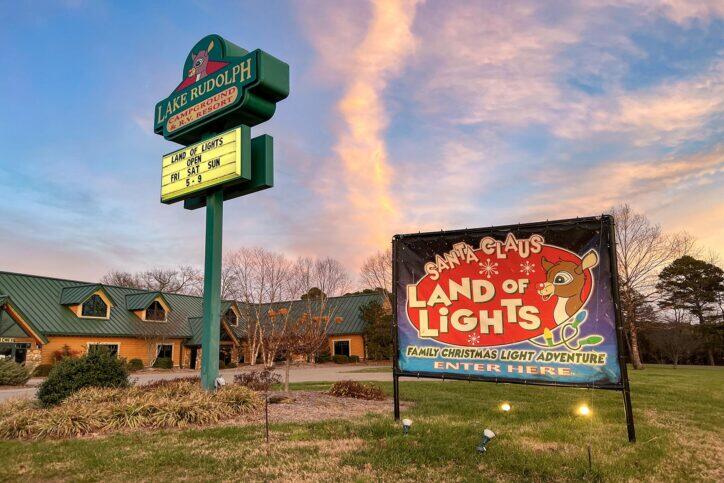 Once our bellies were full, we were ready for some festive Christmas lights. Lake Rudolph Campground is just next door to Holiday World and is the best spot in town to see lights. The entire campground was transformed into a “Santa Claus Land of Lights” drive-thru experience.

We set our radio to the local holiday music station and drove around the 1.2-mile trail with light displays and oversized book pages that told the story of how Rudolph came to helm Santa’s sleigh. I was the official reader and I couldn’t help but smile when I heard people in the cars around me reading the story from their cars, too.

After a full day of holiday fun, we were all ready for a long winter’s nap. I went to sleep grateful for the serendipitous series of events that created a town dedicated to Christmas.