5 Chicago Restaurants That Will Transport You Around the World

With dirt-cheap taco joints and trailblazing temples of haute cuisine—and everything in between—Chicago has one of the richest, most diverse, most satisfying food scenes in the United States. Of course, the city has hometown staples like deep-dish pizza, Italian beef sandwiches, and Chicago-style hot dogs, all of which are worthy of indulgence, but this is also a town where you where you can taste the flavors of the world. What’s more, certain restaurants and bars are paying increasing attention to décor, effectively conjuring other locales with their attention to design and furnishing, in addition to menus. Whether you want to pretend you’re near the beach in Santa Monica, in a bustling bistro in Paris, or at a hip Tokyo eatery, these five spots will make you feel like you’ve temporarily departed the Windy City—but happily you will not have. 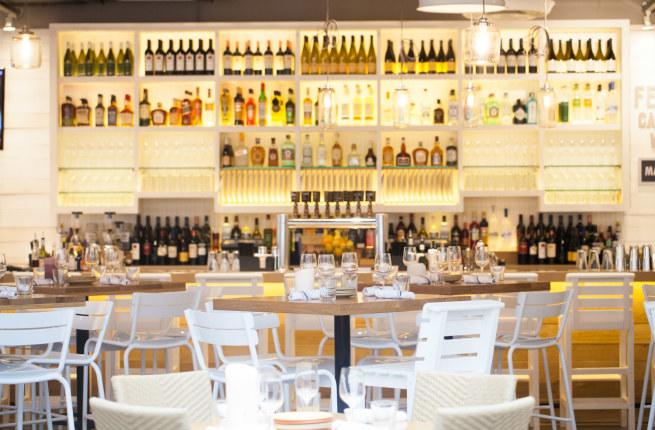 The beaches on Lake Michigan are nice, but they’re a far cry from the sands of California. Still, if you’re looking for a taste of the SoCal experience, head to Summer House Santa Monica in Lincoln Park for a beach-house setting and sunny vibes no matter what time of year. White-lacquered wood, string lights, hanging plants, and a retractable glass ceiling set the scene for this casual spot, which takes advantage of the warmer months but manages to feel like an escape even in the depth of Chicago’s miserable winters, thanks to the sunshine and the wood-burning oven. (The restaurant’s main dining area is called the “Vitamin D Room.”)

The menu itself may not hew exactly to what you would find in Santa Monica, but the emphasis on light, fresh, and seasonal is authentic. Salads are lightly dressed, the excellent burrata is handmade daily, and the pastas are surprisingly the standouts of the menu. The lunch menu is limited, but at night you’ll find a greater emphasis on seafood, including sushi, and grilled steaks. The refreshing cocktails focus on fruit and herbal components, while the wine menu has a good amount of offerings from California, in particular the southern part of the state, a nice change from the Napa and Sonoma selections you can find everywhere else. 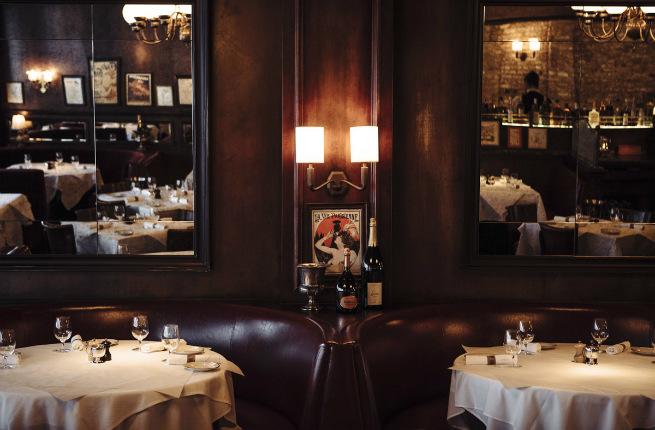 Paris Club originally opened its doors in the River North neighborhood in early 2011; at the time, it was a barn-sized brasserie with a nightclub upstairs and a see-and-be-seen crowd. These days, things are a bit different, as the space downsized, redecorated, and separated itself from the nightlife aspect, reopening as Paris Club Bistro & Bar in February 2014. The room has a classic look, with wooden paneling, leather banquettes, vintage French lithographs adorning the walls, and a handsome bar upfront. And the ambiance is different—better—more grown-up with an intimate, romantic vibe that puts the focus on the food rather than the people watching. 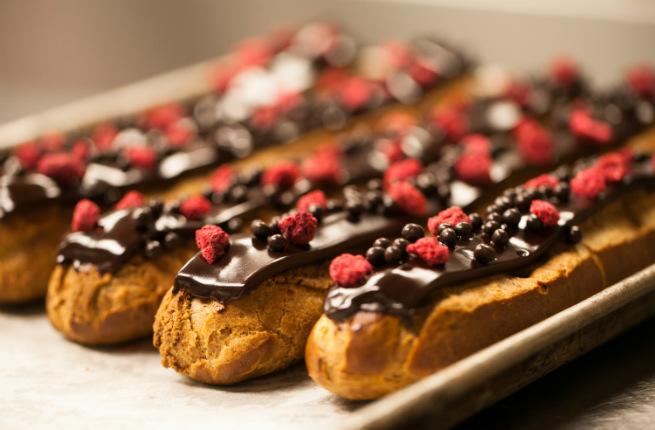 The menu of French classics, overseen by acclaimed chef Doug Psaltis, satisfies with familiar favorites, such as escargots in garlic butter, steak tartare, moules frites, and coq au vin. Still, you’ll find occasional touches of surprising luxury, as in a dish of lobster scrambled eggs topped with black truffle or profiteroles made with salted caramel, fleur de sel, and a rich chocolate sauce. The wine list features selections from Burgundy, the Loire Valley, Bordeaux, the Rhone Valley, and southern France, as well as a handful of international selections that are identified as “French at Heart.” In a city where traditional, unfussy French food is hard to find, this restaurant is a welcome retreat. 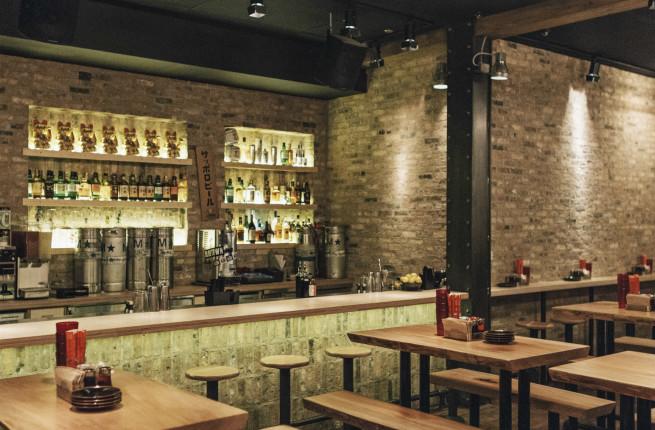 Occupying what was formerly half of Paris Club, Ramen-san has been slinging its bowls of ramen since March of last year. The space is airy and bright, with sand-colored brick walls, blonde-wood benches and tables, and an uncluttered bar that doubles as seating for countertop dining. The soundtrack, which might include hip-hop, is loud and upbeat, while Japanese signs and golden cat statues serve as the few decorations, making this feel like a place you might see young, hip diners if you were in Tokyo. 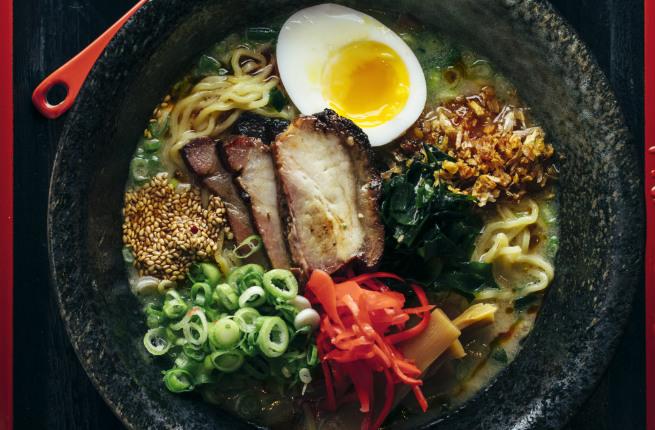 Of course, the point of coming here is to eat ramen, and there are seven options on the menu; stick to the traditional tonkotsu option or, if you’re feeling like something more unique, opt for the kimchi and fried chicken bowl. Small plates include de rigueur offerings like gyoza and steamed buns stuffed with pork belly, but don’t overlook the spicy Szechuan chicken wings, irresistibly flavorful and messy, or the wonton stuffed with pork and shrimp, doused with umami-heavy XO sauce. For drinks there are sake bombs, ice-cold Asahi on draft, and a robust selection of Japanese whiskeys, a surprising find in this relatively modest space. 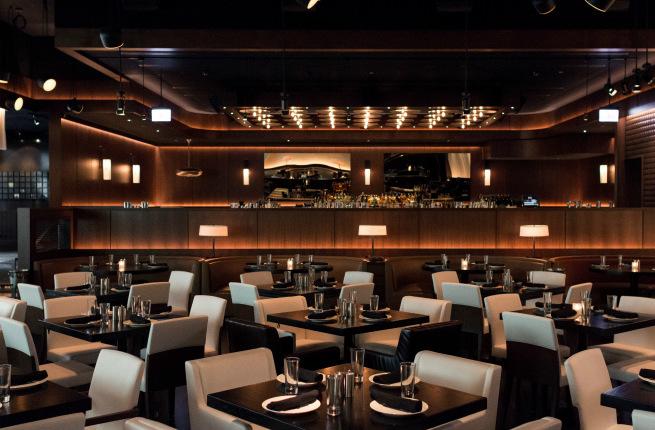 Chicago has no shortage of great steakhouses, but RPM Steak brings a Vegas-sized dose of glitz and glamour to the sometimes-staid restaurant genre. A joint effort between hospitality group Lettuce Entertain You and celebrity couple Bill and Giuliana Rancic, RPM followed in the footsteps of RPM Italian, debuting in August 2014 and remaining a River North hot spot ever since. There’s no other way to put it: This is a sexy restaurant, with seductive lighting and spacious, half-moon banquettes lining the perimeter of the bar area, where you can perch and watch over the action in the main dining room. 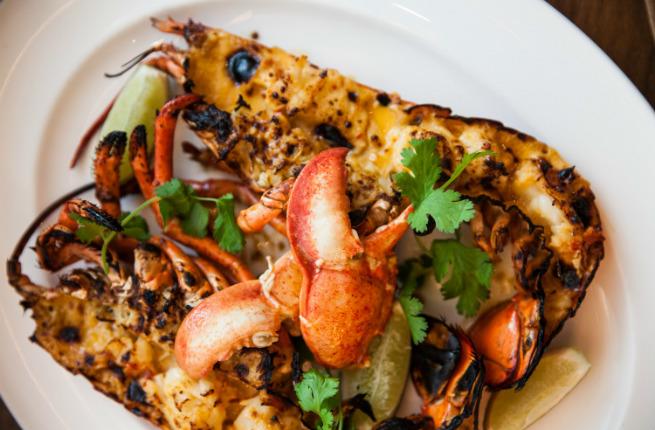 If the ambiance doesn’t make you feel like a high roller, the menu (and the fifty-page wine and spirits list) certainly will. Foie gras, lobster, bone marrow, and Wagyu beef all make appearances, as does a showy “millionaire’s potato,” a large spud that is baked twice then topped with fontina and black truffle. To start, take the advice of the wait staff and create your own appetizer by ordering both the thick-cut bacon with a bourbon-vanilla glaze and the coal-roasted king crab—combine bites of each to reach a hedonistic nirvana. If you wish, you can spend almost $200 on a 36-ounce steak or you can be reasonable and stick to the $39 steak frites—either way you won’t be disappointed.

Three Dots and a Dash 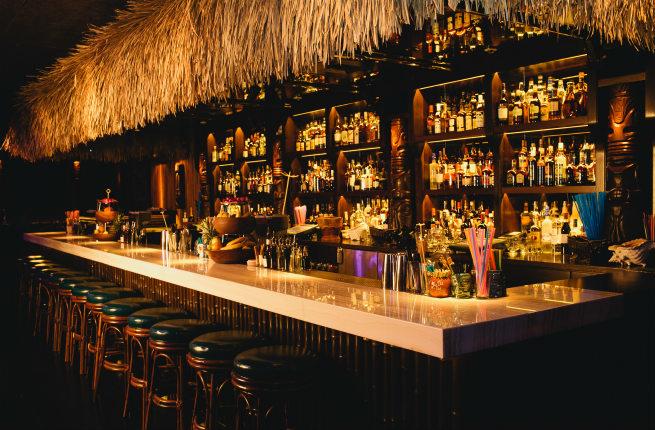 Sometimes you pass through an unmarked door, down a set of stairs, and suddenly you feel like you’re on a tropical island. That’s the case at Three Dots and a Dash, which opened in July 2013 but gained international recognition late last year when it appeared on an annual ranking billed as The World’s 50 Best Bars. (Yes, technically it is a bar, but they also serve food.) Ever popular, this downstairs den is a temple of Tiki-bar culture that both pays homage and brings a contemporary sensibility to Polynesian–themed drinking establishments. Sticking to a traditional Tiki-bar look, Three Dots and a Dash features bamboo, funky lighting, and all the other expected design elements without ever feeling too over-the-top. 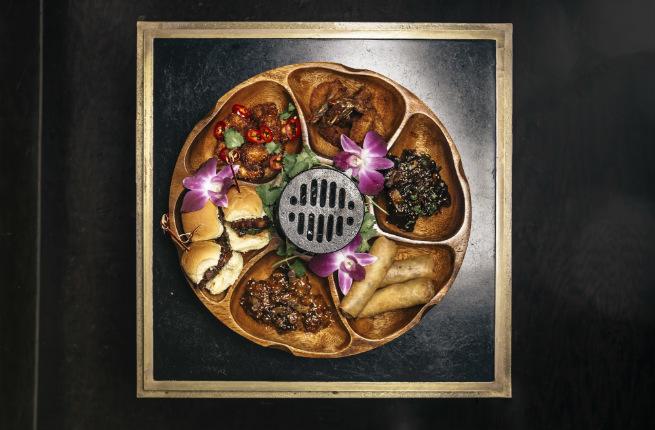 As for the drinks, there are sixteen of them: half are old recipes sourced from historic Tiki spots like Don’s Beachcomber Cafe, which opened in Hollywood in 1936, and the other half are new inventions that stick to the tried-and-true formula of rum, fruit, and various other fun ingredients. There are also group drinks served in large vessels shaped like clam shells, skulls, or ships; there’s also an ostentatious treasure chest designed for six to eight drinkers, which is served with a bottle of Dom Pérignon for a cool $385—you shouldn’t order one, but it’s fun to see it at a neighboring table nonetheless. The food menu features throwback items as well, including coconut shrimp, crab Rangoon, and a genuine Pu Pu platter that serves three to four tipplers, an ideal way to soak up those drinks at the end of the night.