Native Floridian Craig Pittman, author of Oh, Florida! How America’s Weirdest State Influences the Rest of the Country, likewise notes residents seem to buy a lot of machetes. His conclusion? “Florida is out to kill us.”

Then there’s “Florida Man” (Florida Woman, too). The meme is a reference to news accounts of bizarre happenings in the state, often with that phrase in the headline (i.e. “Florida Man/Woman Uses Machete to Fend Off Shark”). It’s also the subject of Pittman’s next book.

Despite all this—and the fact that Florida’s first flag included the motto, “Let Us Alone”—the state remains a major tourist destination whose population is growing at a fast clip. Go figure.

So what keeps ‘em coming? Perhaps it’s because of the oddities found in what many swear is paradise. 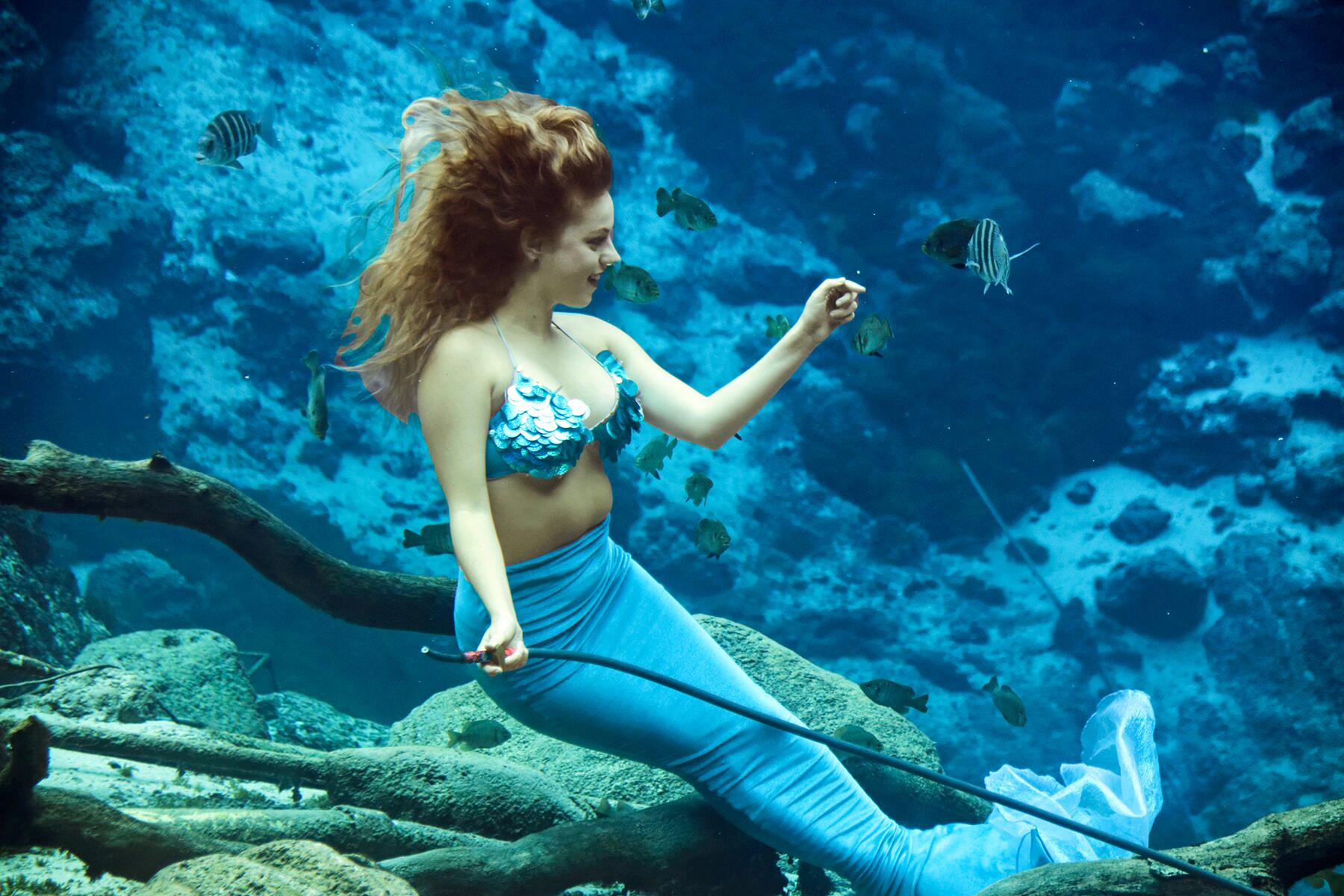 Where Mermaid Is a State Job

In 1947, Weeki Wachee began presenting smiling, flippered women who ate, drank, and executed graceful choreography in an underwater theater, all while battling a five-mile per hour current. In between, the “mermaids” sucked up oxygen from an air hose. The act had its heyday in the ‘60s, before Disney World muscled in to siphon off visitors. The revitalized spectacular lives on under state management. Think you’ve got what it takes to shake your tail? Try-outs are held on an as-needed basis; be prepared for an endurance swim and a breath-holding test. If you can’t wait to take the plunge, Sirens of the Deep is a two-day camp for adults 30+ (heck yeah, mermen can attend!) held 10 times a year that fills up super-fast.

INSIDER TIPStay for a swim in the bracing, 74-degree springs. Sorry, no fins allowed. 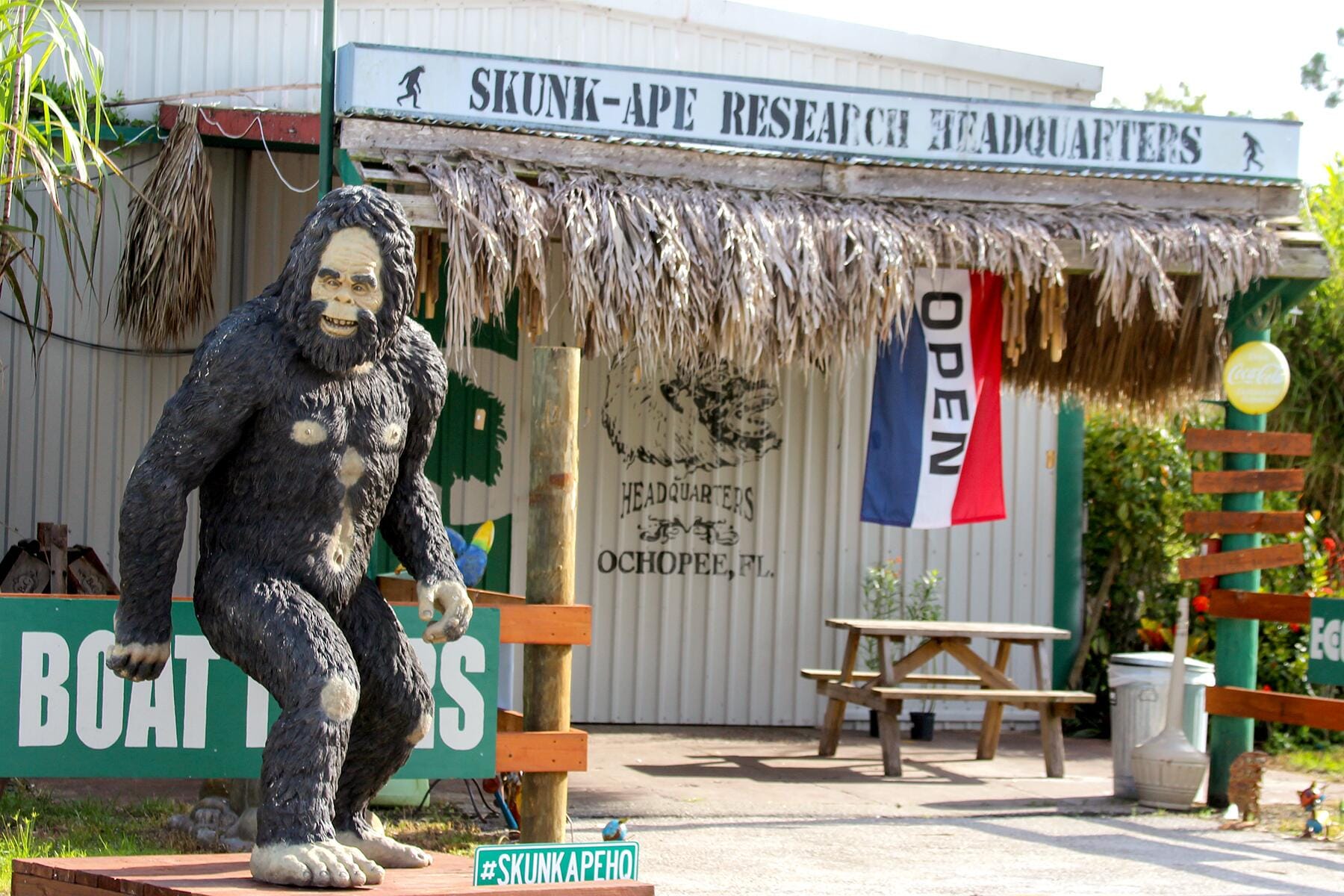 Missiles and Snakes and Cryptids, Oh My!

A region this big (two million acres) of necessity has its share of weirdness, and the Everglades does not disappoint. Immediately inside its southwestern border on Highway 41 is the tiny town of Ochopee, home to the U.S.’s smallest post office, a former tool shed. Further down the road is the Skunk Ape Research Headquarters, dedicated to the mythical creature also known as Florida Bigfoot (not to be confused with Florida Man). Continue to Everglades National Park to acquaint yourself with the state’s most detested snake, the hulking Burmese python. The Florida Fish & Wildlife Conservation Commission reports that 5,000 of these nonnative pests have been “removed” under the Python Elimination Program (a nice way of saying they’re killed—humanely). Go deeper into the park to discover the old Nike Hercules missile site, open for tours December-March.

INSIDER TIPStop by Homestead’s Robert Is Here (it’s a long story) for a key lime milkshake.

Interested in all the national parks? Visit our new National Parks section! 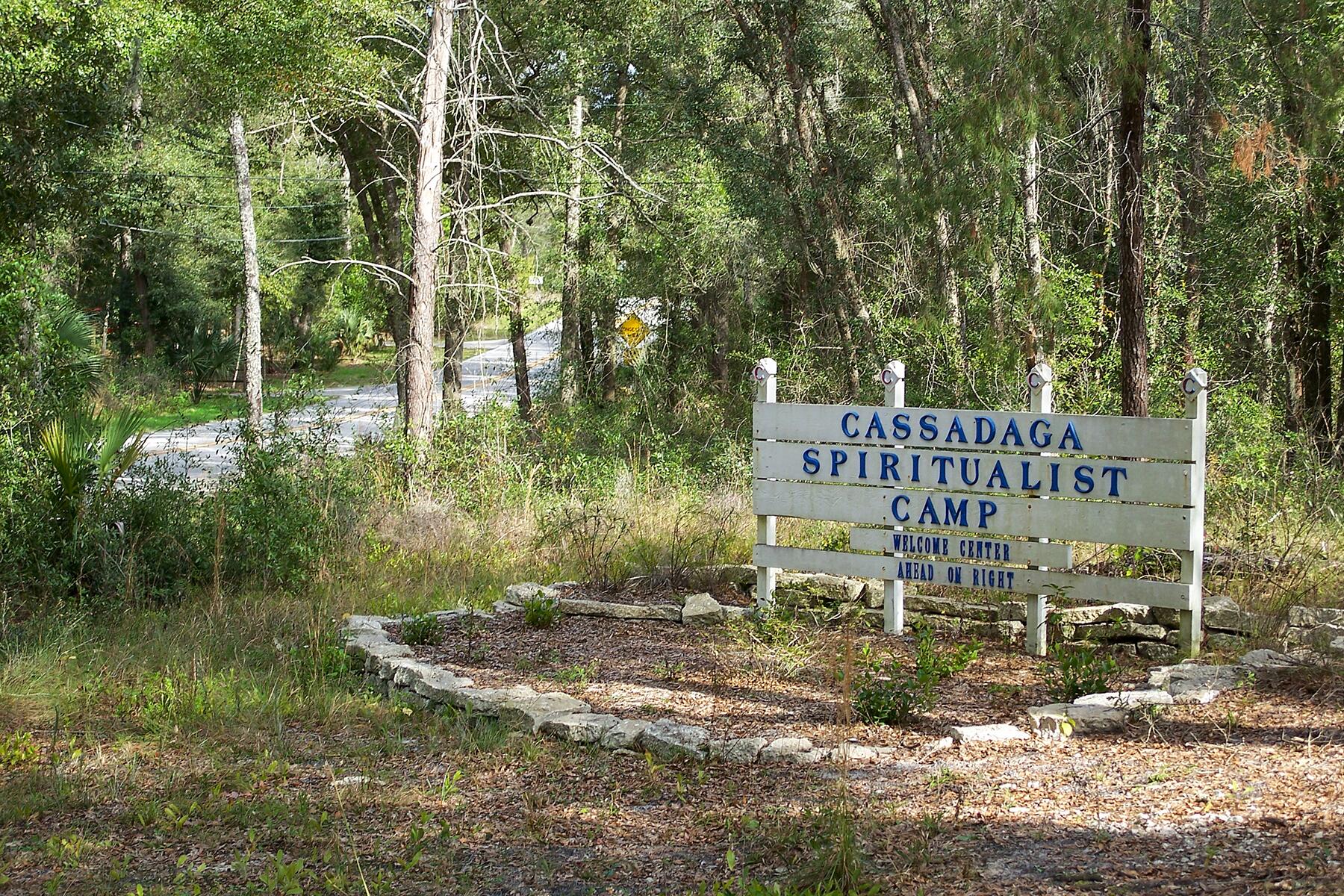 Psychic Capital of the World

If Florida really is bumping off both invasive serpents and people, you may be able to conjure up the dearly departed at the 57-acre Cassadaga Spiritualist Camp, which happens to be on the National Register of Historic Places. No reservations required: the “certified mediums and healers” accept walk-up appointments. The Camp, as it’s called, claims it’s a naturally-occurring vortex, that is “a point of concentrated psychic energy,” like Stonehenge. Several smaller, man-made vortices are scattered about, a result of all the extrasensory activity. Perhaps you’ll also pick up vibes standing on the corner of Mediumship Way and Spiritualist Street. If you’re not into all that woo-woo stuff, but curious about a society that started back when Queen Victoria was still above ground, you can book a tour Thursdays through Sundays.

INSIDER TIPThe Cassadaga Hotel is supposedly haunted, but the Camp disavows any connection. 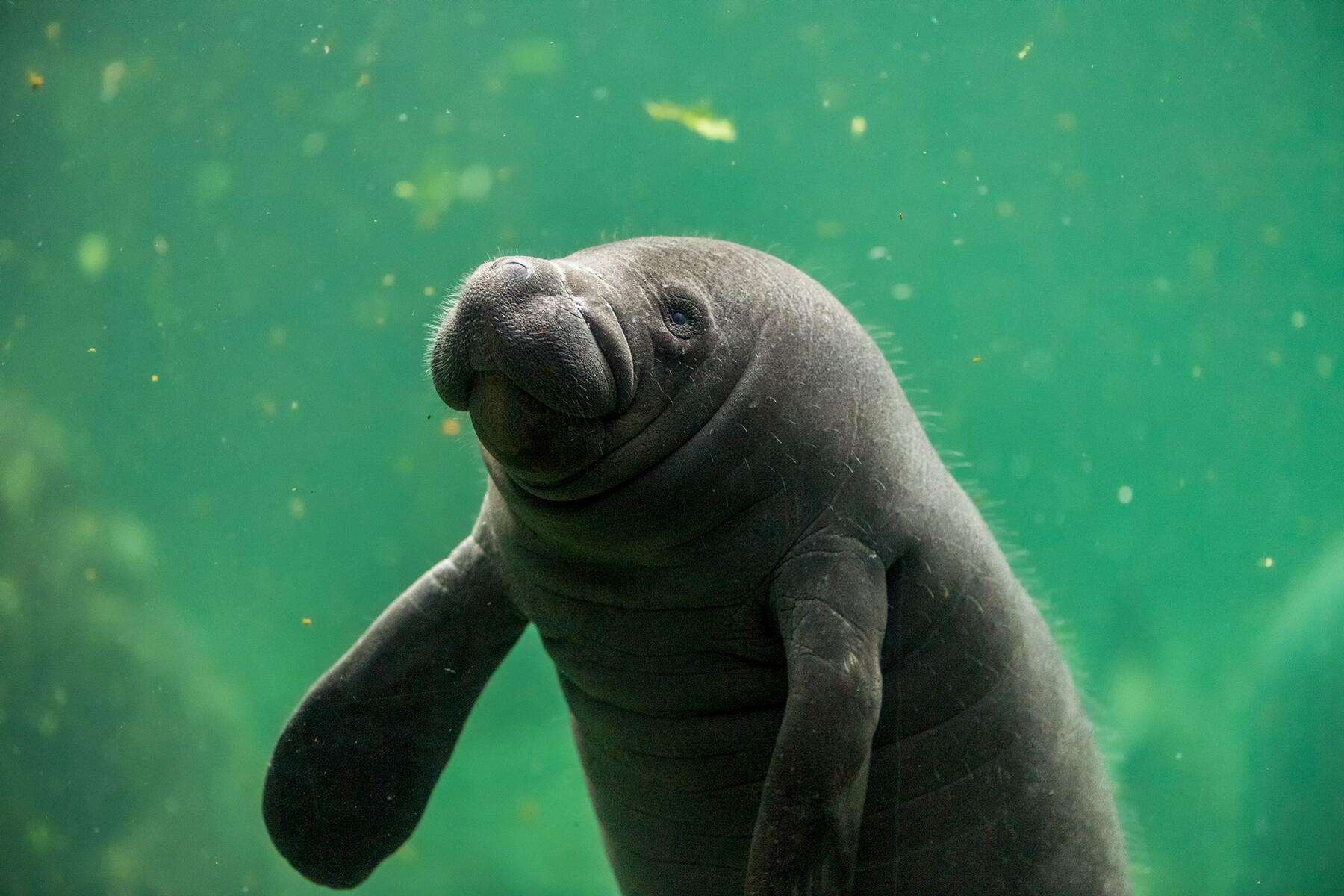 Power plants are a blight on the landscape, right? Not to sea cows. Tampa Electric uses saltwater from Tampa Bay to cool Big Bend Unit 4, then releases the warm, decontaminated water into a discharge canal. When the bay’s temperature dips below 68 degrees, its manatee inhabitants gravitate to the balmier water. Today, the inlet is a state- and federally-designated sanctuary for Florida’s officially-designated marine mammal. Visitors flock to see the gathering of these so-ugly-they’re-cute critters, who often remain motionless for long periods, like blobs floating in lukewarm soup. Then again, you might catch them swimming upside down or executing barrel rolls. Also check out the education center, the off-season home of MLB’s Tampa Bay Rays’ namesake mascots.

INSIDER TIPHead west on Highway 672 to Alafia River State Park, a reclaimed phosphate mine, and known for its mountain biking trails. 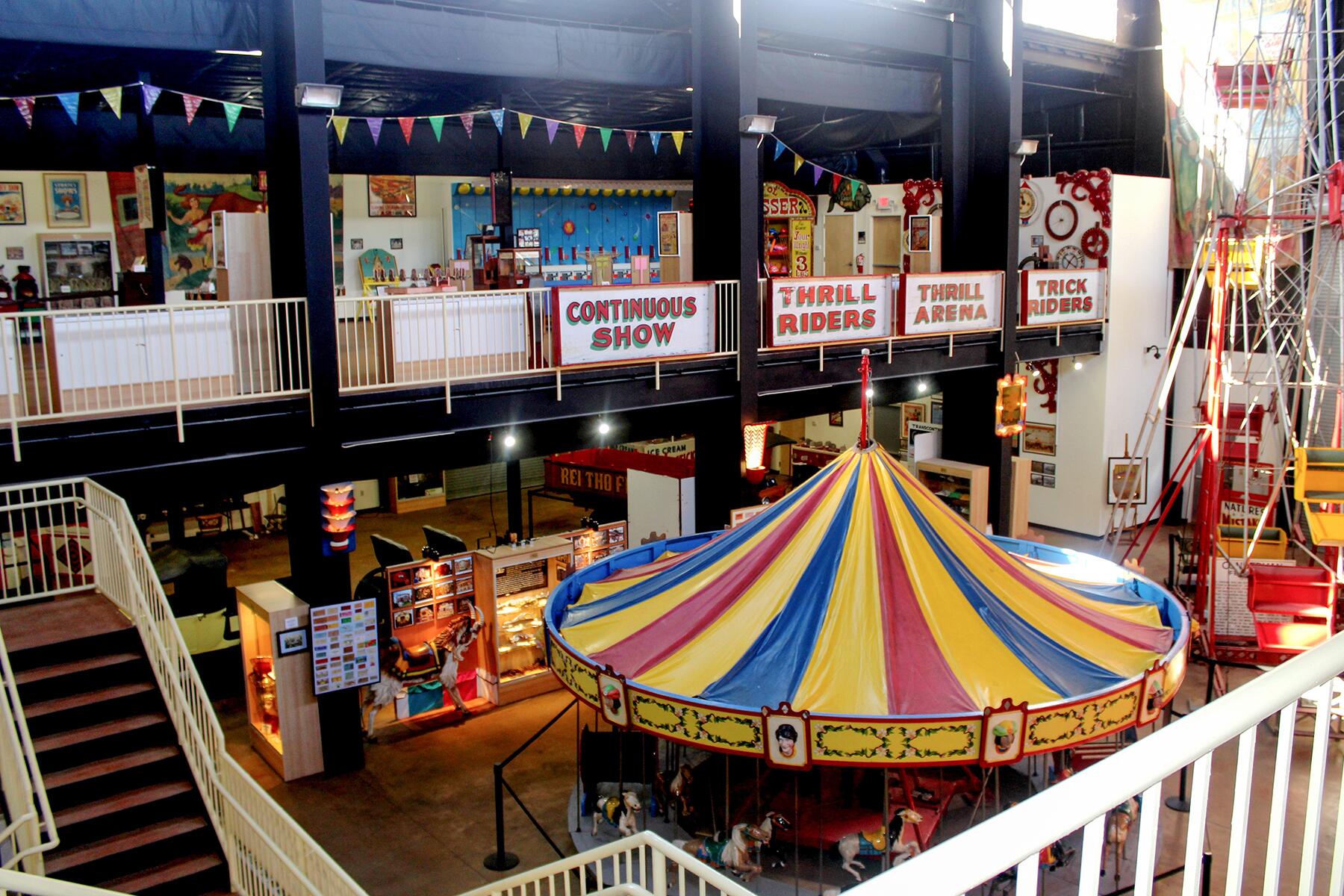 PHOTO: Courtesy of the International Showmen's Museum
5 OF 10

Run Away With Circus Folk

A short drive north on Highway 41 from the congregating manatees is Gibsonton, aka Gibtown. One-time sideshow wonders such as Lobster Boy, Mule-Faced Woman, and Alligator Man (again, not Florida Man), wintered over or retired here in days gone by. The area embraces its quirky and sometimes distressing past, especially at the International Independent Showmen’s Museum in neighboring Riverview, which focuses on the history of America’s traveling shows. One display highlights what it calls the world’s strangest couple—the Living Half Girl, legless Jeannie Tomaini at two-feet five-inches tall, and her husband Al, clocking in at 7’4.” Another exhibit is dedicated to the Viking Giant.

INSIDER TIPYou won’t find popcorn at the museum, but you can at The Popcorn Spot nearby. Savory and sweet flavors include dill pickle and chocolate cheesecake. 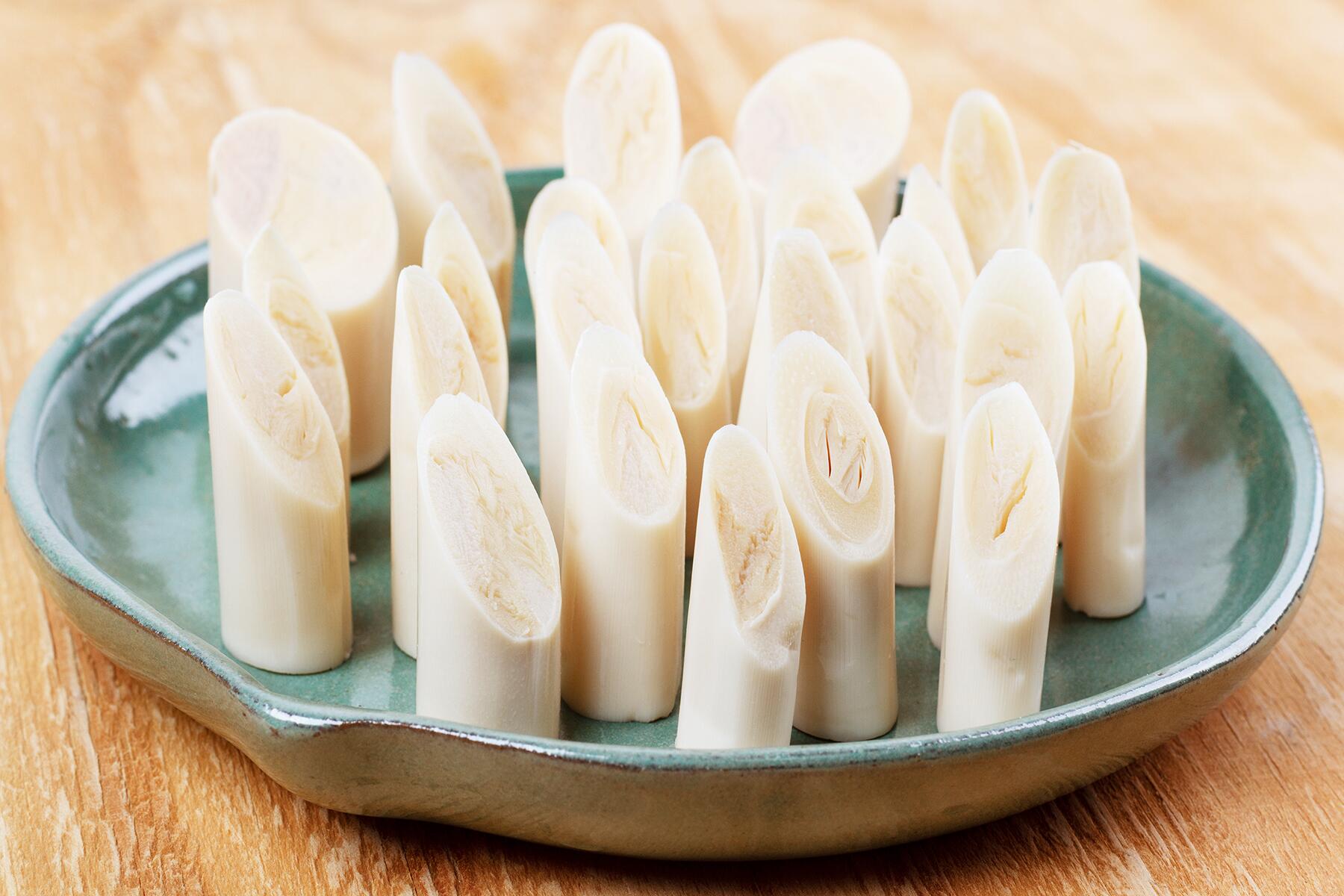 It May Be Hearts of Palms to You, but It’s Swamp Cabbage to Floridians

In her 1942 memoir, Cross Creek, noted Florida author Marjorie Kinnan Rawlings wrote, “The Ritz and the Waldorf and such haunts also serve our most exotic vegetable. They call it hearts of palm, but to us at the Creek, it is, simply, swamp cabbage. I serve it seldom, [because] the epicure’s feast means the death of a palmetto…You cannot have your palm tree and eat it, too.” The state tree, the ubiquitous sabal palm, alias the cabbage palm, is the one that gives it up for this dish that goes low- or high-brow. At Labelle’s Swamp Cabbage Festival, you’ll find lots of good eats every February, no matter what you call it. Stick around for the race featuring Florida’s favorite roadkill, the oft-leprous armadillo.

INSIDER TIPFood Network and Saveur both offer swamp cabbage recipes. If you can’t harvest your own, you might have to (gasp!) use canned hearts of palm. 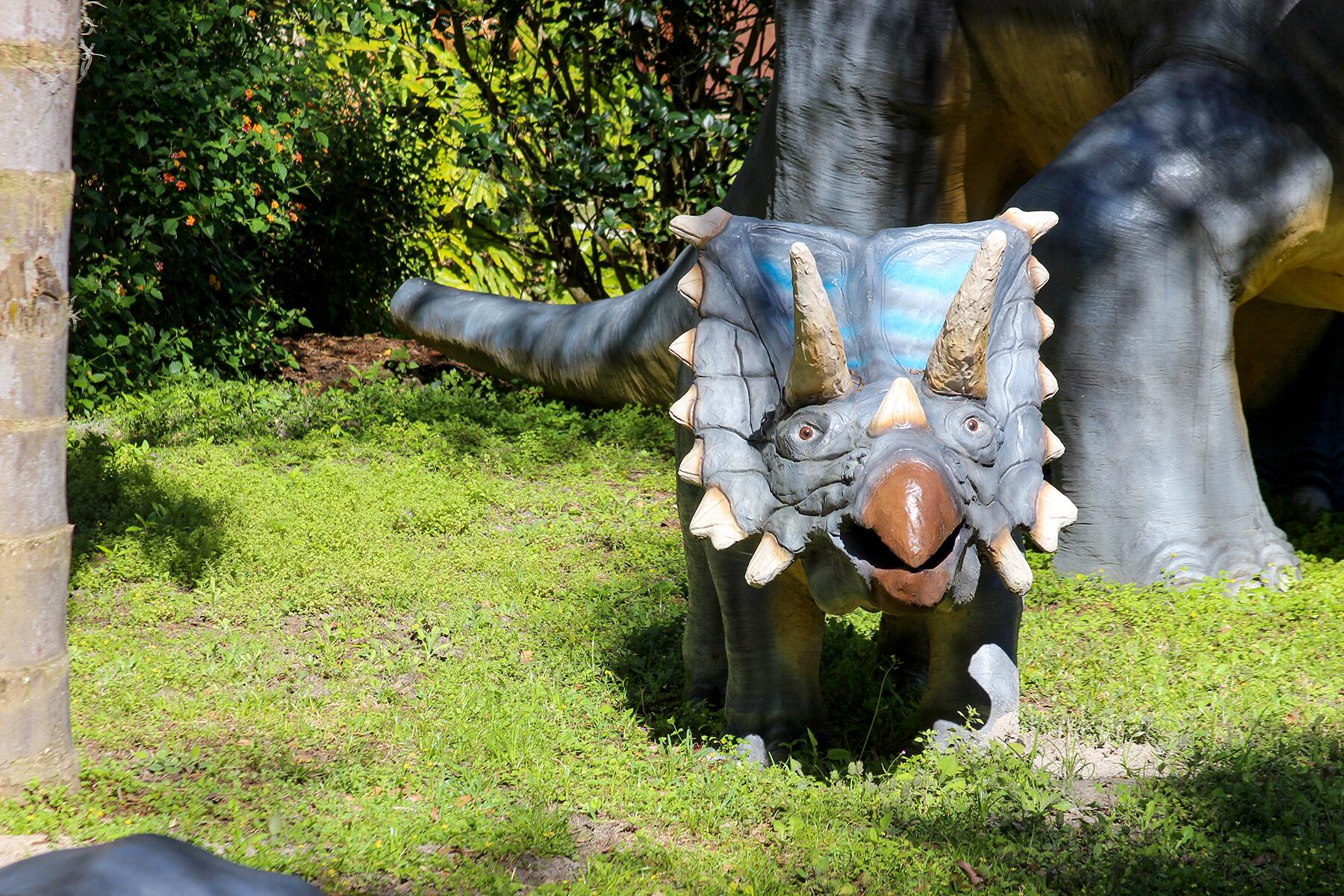 The Giant Dinosaurs of Interstate 4

Chances are, while driving in Florida, you’ll end up on I-4, the highway that cuts a congested, southwest-to-northeast swath across the state. Heaven help you. Continual road construction and bad drivers are just two of the hazards you’ll encounter. The “Dead Zone” is another. This quarter-mile stretch between Orlando and Daytona is notorious for its high number of accidents, many fatalities. But Dinosaur World is there to soothe your last nerve. The life-sized reptiles seen by exit 17 are a teaser for the over 200 skulking inside the attraction. Pittman can’t prove it, but he’s certain Florida has more fake dinos than any other state. As a reporter for the Tampa Bay Times, he covered the 2007 theft of a two-foot-tall, four-foot-long one from Dinosaur World. How and who liberated the 50-pound figure attached with concrete and rebar then heaved it over a fence remains unknown.

INSIDER TIPDinosaur World also has locations in Kentucky and Texas. 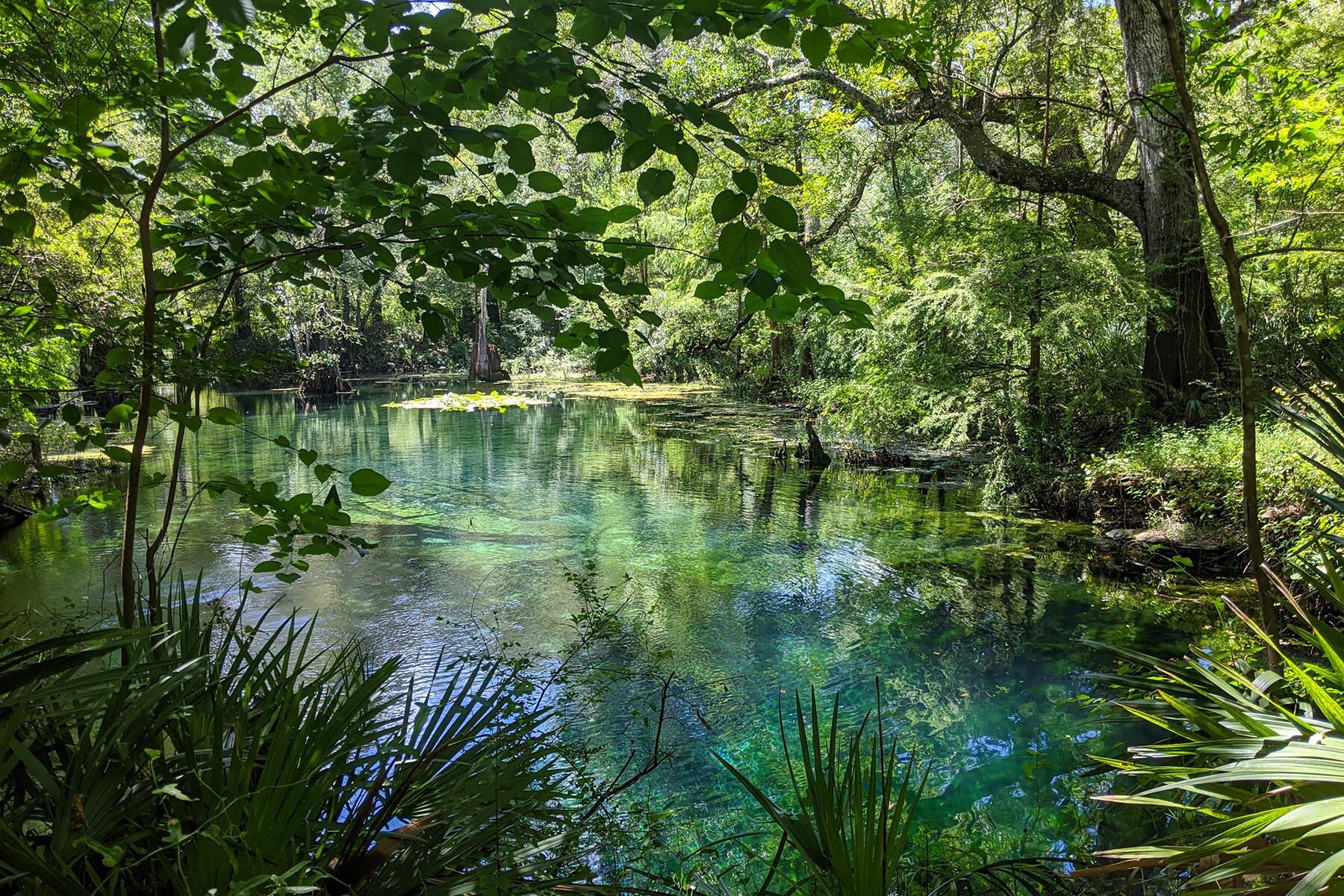 Florida’s karst foundation, limestone easily dissolved by water, means it leads the nation in the number of reported sinkholes that open up and engulf everything in their maw. This includes cars, houses, stores, and, unfortunately, people. In Oh, Florida!, Pittman relates the story of a woman who tumbled not once, but twice into one in her own backyard, saved only by her cell phone the first time and by screaming for two hours the second. Get up close and personal (safely) with six sinkholes at Wes Skiles Peacock Springs State Park, along with five springs and a spring run, all pretty much in their natural condition. While you can’t swim in the sinkholes, you can at two of the springs. Only divers with scuba certification can traverse the approximately ten miles of surveyed underwater passages.

INSIDER TIPFind a list of other Florida’s natural springs here. 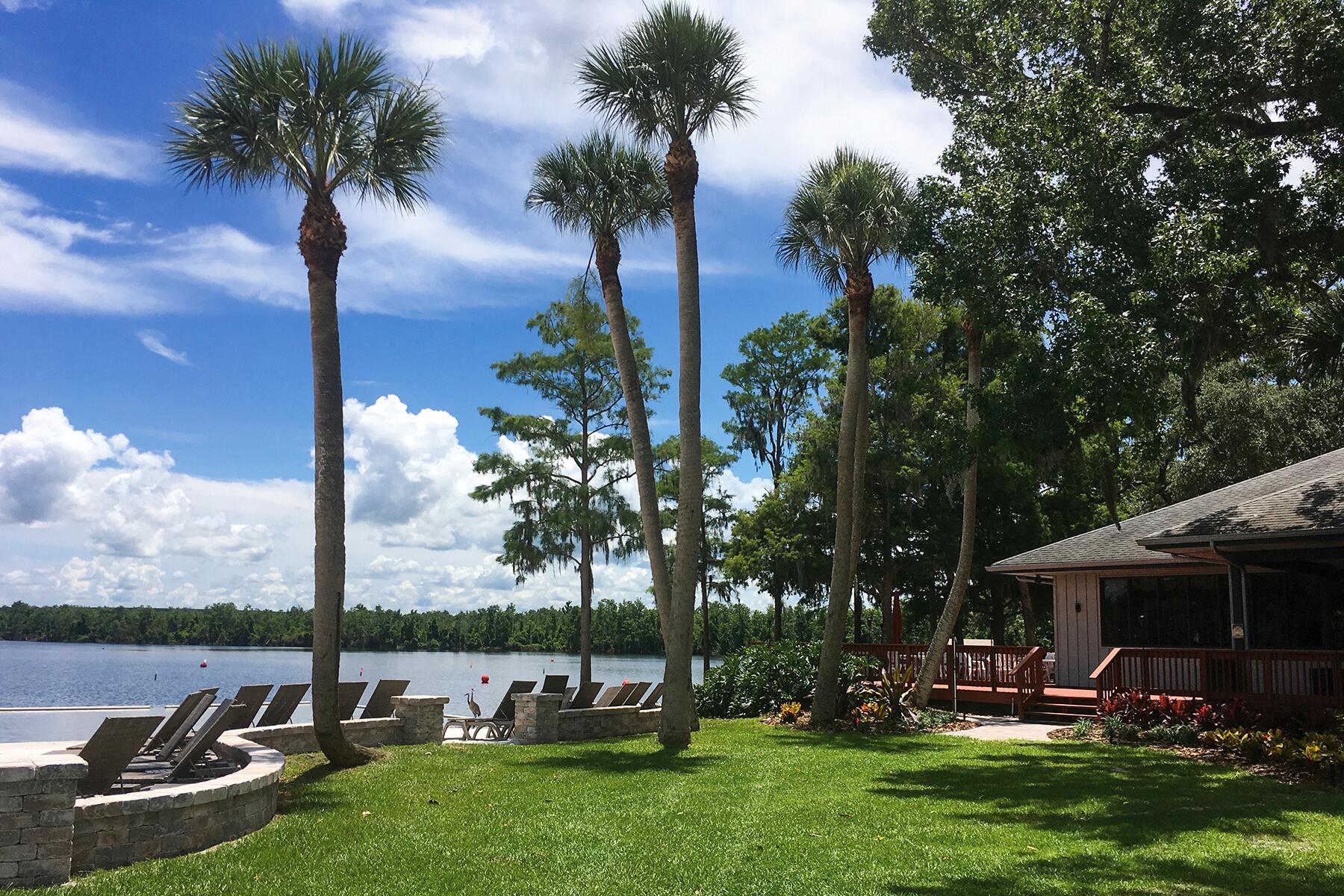 PHOTO: Courtesy of Cypress Cove
9 OF 10

Why wouldn’t Florida be a popular place for a “bare it all” vacation? It’s warm practically all year round. Pittman devotes a whole chapter to what he labels “The Sinshine State,” site of countless debauched and/or nudity-related crimes, typically carried out by spring breakers and, of course, Florida Man/Woman. Also, the 1972 porno Deep Throat was filmed in the state. Naturist resorts are plentiful, giving new meaning to the description, “room with a view.”  Paradise Lakes Resort bills itself as a clothing-optional retreat “in the heart of the nudist capital of the United States—Pasco County.” Kids are welcome. Kissimmee’s Cypress Cove Nudist Resort, not too far from Disney, is also family-friendly. If you like it there, you can buy your own place. At any rate, they look forward to seeing more of you.

INSIDER TIPUnsure what to pack for a naturist destination? Wonder no more. 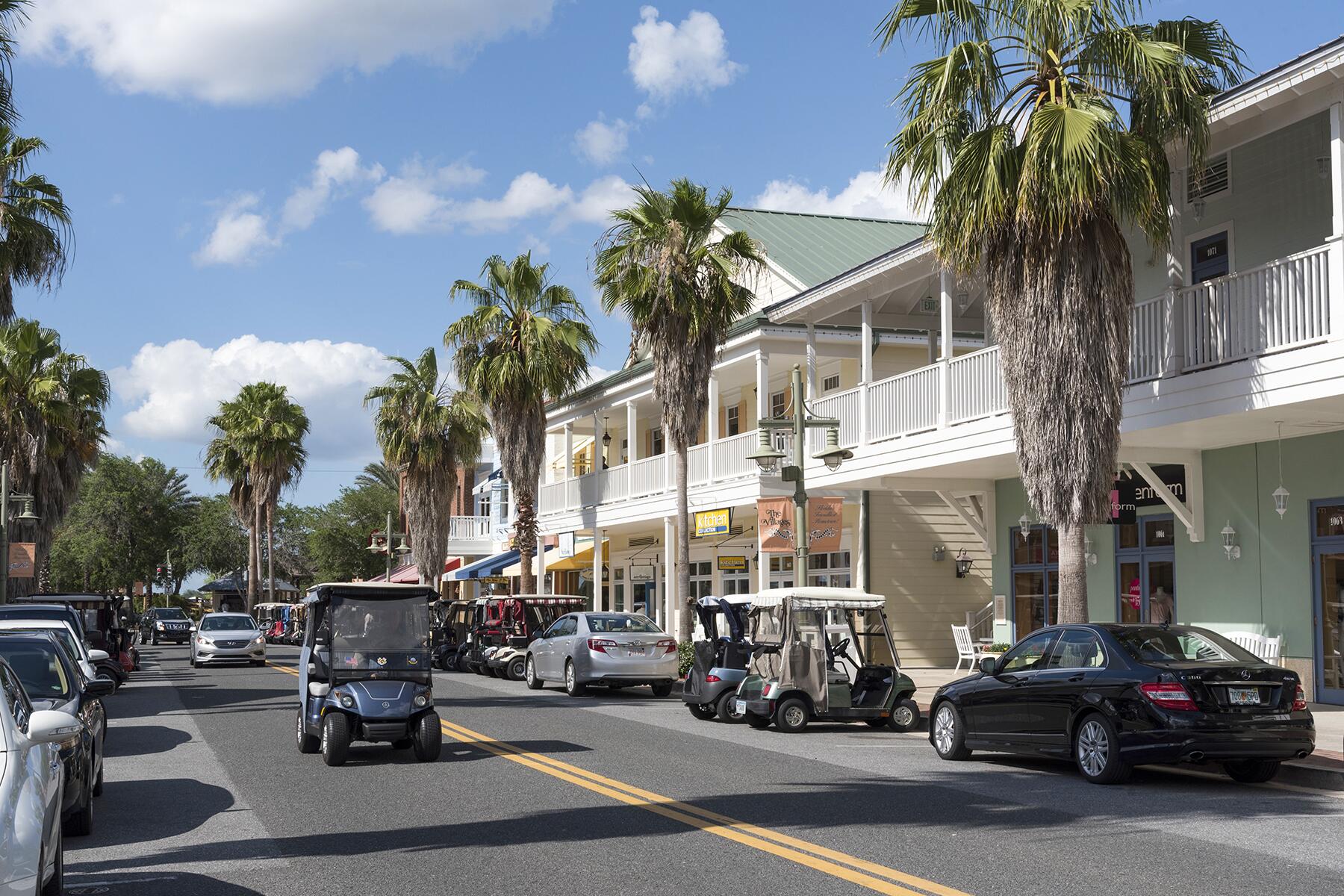 Home of the Tricked-Out Golf Carts

“A collection of quaint retirement neighborhoods located in the heart of Florida,” each one with its own “charm and personality.” That’s how The Villages describes itself. On the other hand, a 2009 New York Post article portrays the community as “a wild retirees’ getaway,” just another confirmation of the state’s licentious reputation. As might be expected at a 55-and-up community, golf courses abound. But most of the golf carts—an estimated 60,000—aren’t used on the fairways, but for the 115,000 residents to tool around in. These aren’t simply your run-of-the-mill golf carts either: they’re customized to reflect their owner’s loyalties, hobbies, or whims. Yes, it’s all fun and games at The Villages until someone gets hurt—and golf cart crashes are regular occurrences. Even upscale ones with seatbelts added aren’t exactly the safest mode of transportation.

INSIDER TIPHankering for your own swanky cart? Prepare to spend in the five figures.

Yes. I have never deen to Florida but have never perceived it as a place that I might enjoy or be comfortable. (I love Vermont and Oregon, though.) My perception has been that Florida is "plastic" "materialistic" "hedonistic" and lacking in "Soul." (With the notable excption of Gainsville's Tom Petty who had lots of "Heart & Soul.")