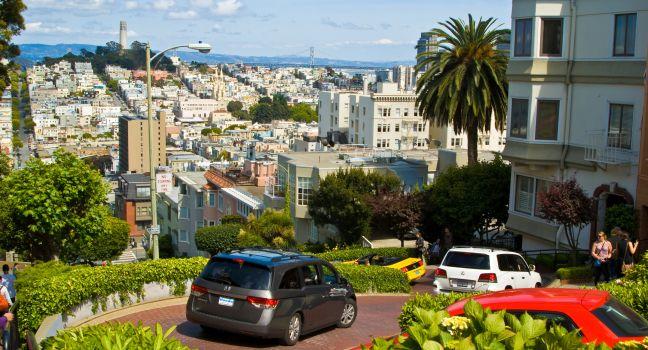 The block-long "Crookedest Street in the World" makes eight switchbacks down the east face of Russian Hill between Hyde and Leavenworth Streets. Residents bemoan the traffic jam outside their front doors, but the throngs continue. Join the line of cars waiting to drive down the steep hill, or avoid the whole mess and walk down the steps on either side of Lombard. You take in super views of North Beach and Coit Tower whether you walk or drive—though if you're the one behind the wheel, you'd better keep your eye on the road lest you become yet another of the many folks who ram the garden barriers. Can't stand the traffic? Thrill seekers of a different stripe may want to head two blocks south of Lombard to Filbert Street. At a gradient of 31.5%, the hair-raising descent between Hyde and Leavenworth Streets is one of the city's steepest. Go slowly!

Book an Experience at San Francisco VIEW ALL