I saw two words in a 171-word email and my curiosity was piqued: Bar. Flight. I saw another two and my heart started racing: Jose. Andres. And then three more and I was hooked: Ramos. Gin. Fizz.

Yes, Jose Andres—that legendary Michelin-starred chef who whips up whimsical concoctions at restaurants from Washington, DC, to Las Vegas, all while doing everything he can to help the people of Puerto Rico—would have a six-course bar flight as fanciful as the food at his restaurant, The Bazaar at the SLS Hotel in Beverly Hills. And one of these drinks would be a Ramos Gin Fizz.

The Ramos Gin Fizz isn’t just any old drink. It’s perhaps the meanest drink you can ask a bartender to make. First of all, it’s eight ingredients (gin—naturally—along with lime and lemon juice, egg white, simple syrup, heavy cream, orange blossom water, and club soda). Second of all, the drink needs to be shaken until that egg and cream foam up—when done correctly, it will rise from the glass like Lazarus from the dead, propelled by the soda water, and extend a half-inch skyward above the rim. To pull off this trick, that poor bartender needs to shake it over and over and over again. Legend has it that at the bar in which it was invented in 1888, it took 12 minutes. The Sazerac Bar at the Roosevelt Hotel in New Orleans, which popularized the Ramos in the ’30s, shakes it somewhere between 50 and 100 times. And as far as I’ve seen, the Sazerac is the only bar in America that consistently puts in the time and effort to do the drink right. In fact, I journey to New Orleans once a year and make a pilgrimage to the Sazerac just to drink up that drink—as it’s the very best I’ve ever had.

But, now, here comes Jose Andres. And if Jose Andres would allow the Ramos to be part of the flight menu at the bar in his restaurant, I figured that finally, I wouldn’t have to travel 2,000 miles for gin and eggs.

And the cost of this six-course bar flight? A staggeringly affordable $55—that’s $9 per designer cocktail. Hell, I’d lay out $55 just for the Ramos. So I emailed my RSVP. 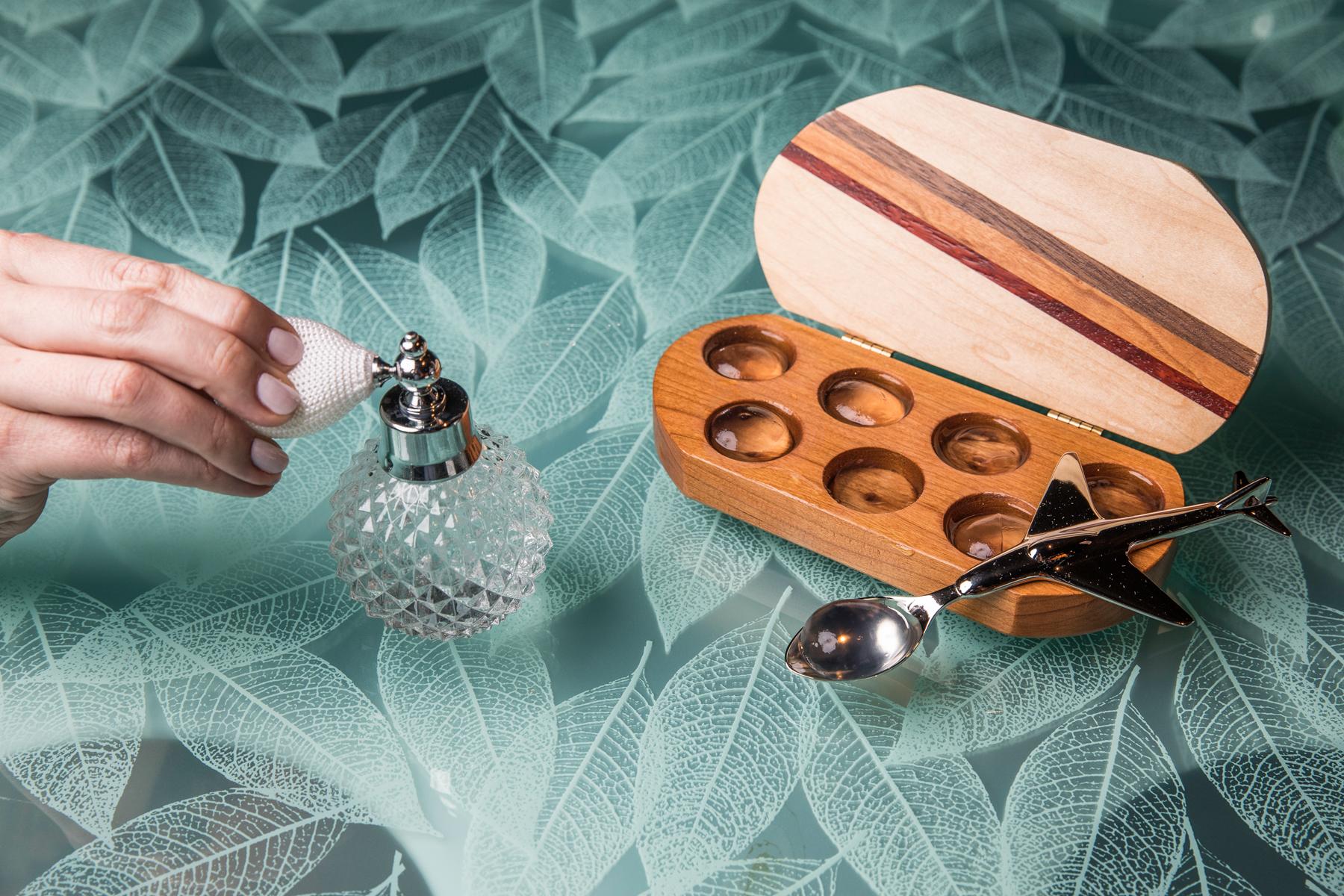 The First Drink: The Sangria Sphere

I sat down at the bar with a fellow tippler and we ordered up the flight. The first of the drinks came atop an airplane-shaped spoon. Get it—an airplane, a flight. Clever. On the spoon is what looked to be an eyeball. Next to it was a perfume bottle. There’s an old Simpsons episode where Yoko Ono asks Moe for a single plum floating in perfume served in a man’s hat. That’s how I felt.

I squirted perfume in my mouth and drank an eyeball. Turns out, the perfume was gin in an atomizer. Color me happy. I gave myself seven or eight sprays. The eyeball was sangria in a gelatinous sphere that exploded in my mouth.

It was a neat trick, but not much of a drink. It’s no Ramos Gin Fizz! Granted, they would have allowed me to continue to splash gin in my mouth for as long as I wanted, but I thought it would be uncouth to sit there slack-jawed spritzing cologne down my throat. 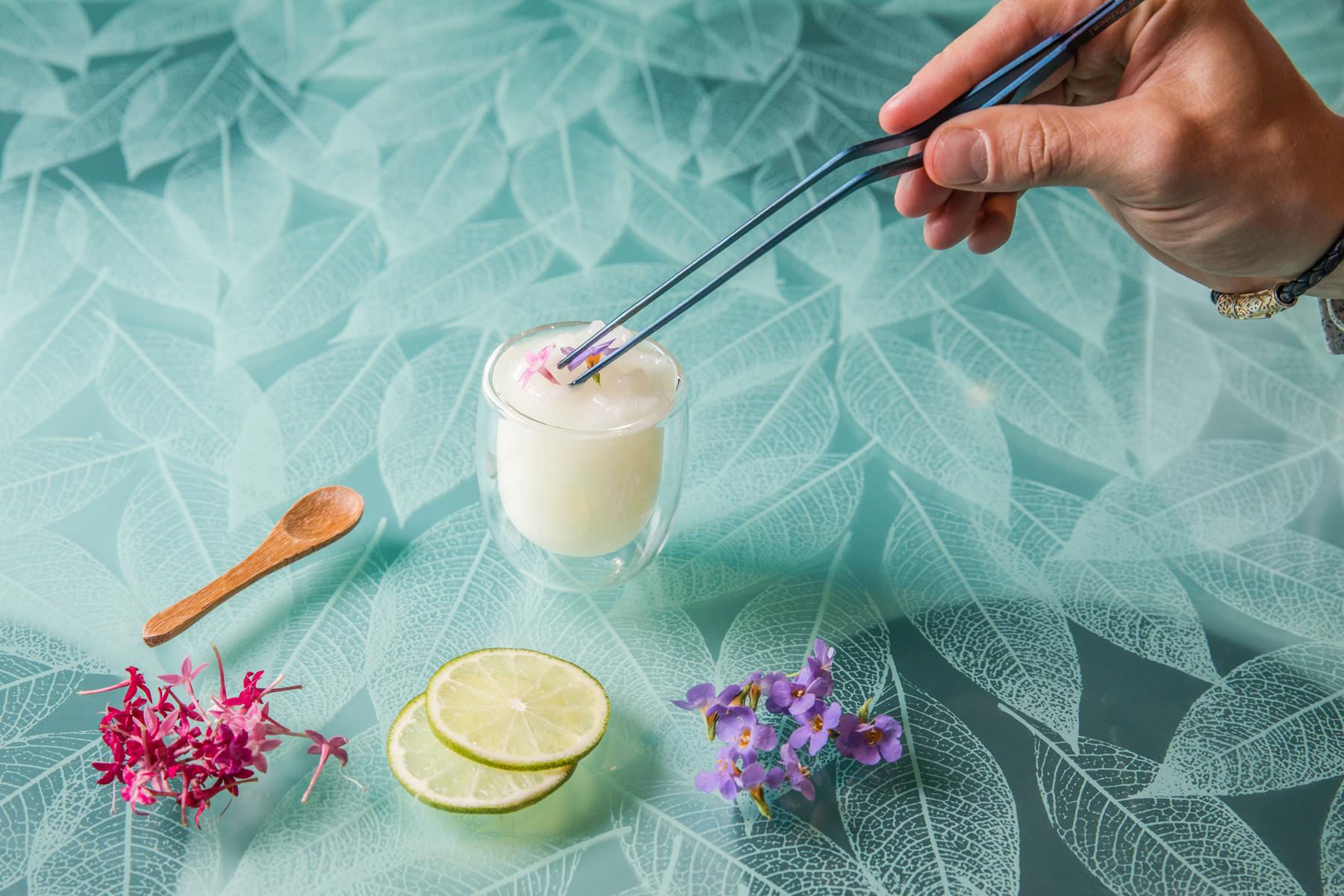 The Second Drink: The LN2 Caipirinha

The bartender, Daniel, appeared with a metal bowl and the largest whisk I’d ever seen. After tossing in a few ingredients, out came the LN2 and all of a sudden I was an eight-year-old watching Bill Nye Science Guy. Only this time, instead of knowledge, I got a stiff drink. I liked this Bill Nye better.

It was no Ramos Gin Fizz, but the LN2 Caipirinha was a refreshing bit of Italian ice with enough hooch to make me want to samba. 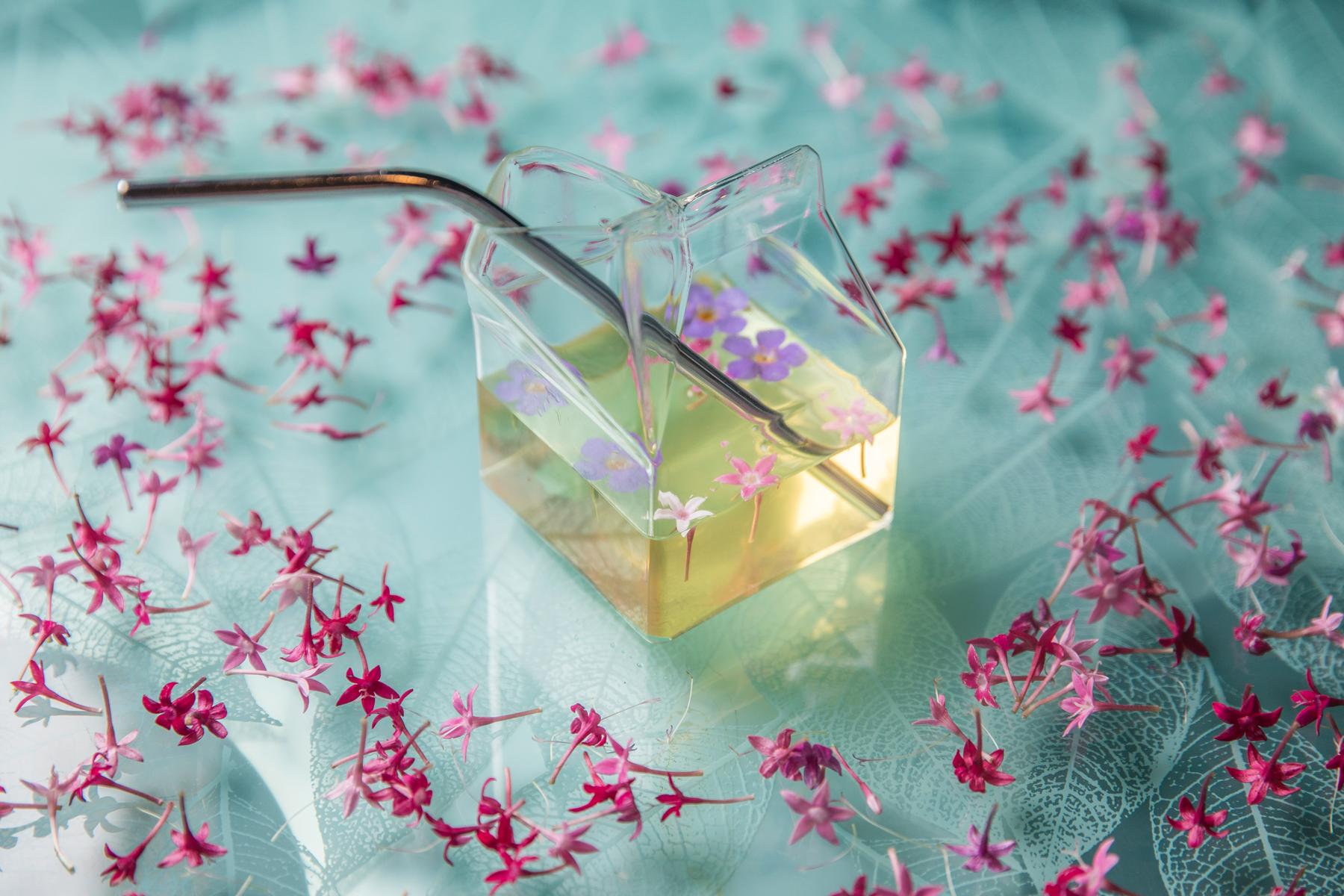 Benjamin Franklin, Founding Father, bon vivant, strumpet-connoisseur, was also a mixologist. In 1763, he sent his pen pal, James Bowdoin, a recipe for something called a Milk Punch. A combination of brandy, spices, citrus, and milk, this strange brew curdles into something actually quite nice.

It should come as no surprise that at a Jose Andres joint, the Milk Punch was served in a glass milk box. This is a man who seems to be obsessed with serving dishes that are shaped like other things—croquettes served in a shoe, caviar served on a manikin hand.

As for the drink, it was (still) no Ramos Gin Fizz, but this 255-year old cocktail packed a subtle punch (sorry) and gave me my nutritionist-recommended daily dose of calcium. 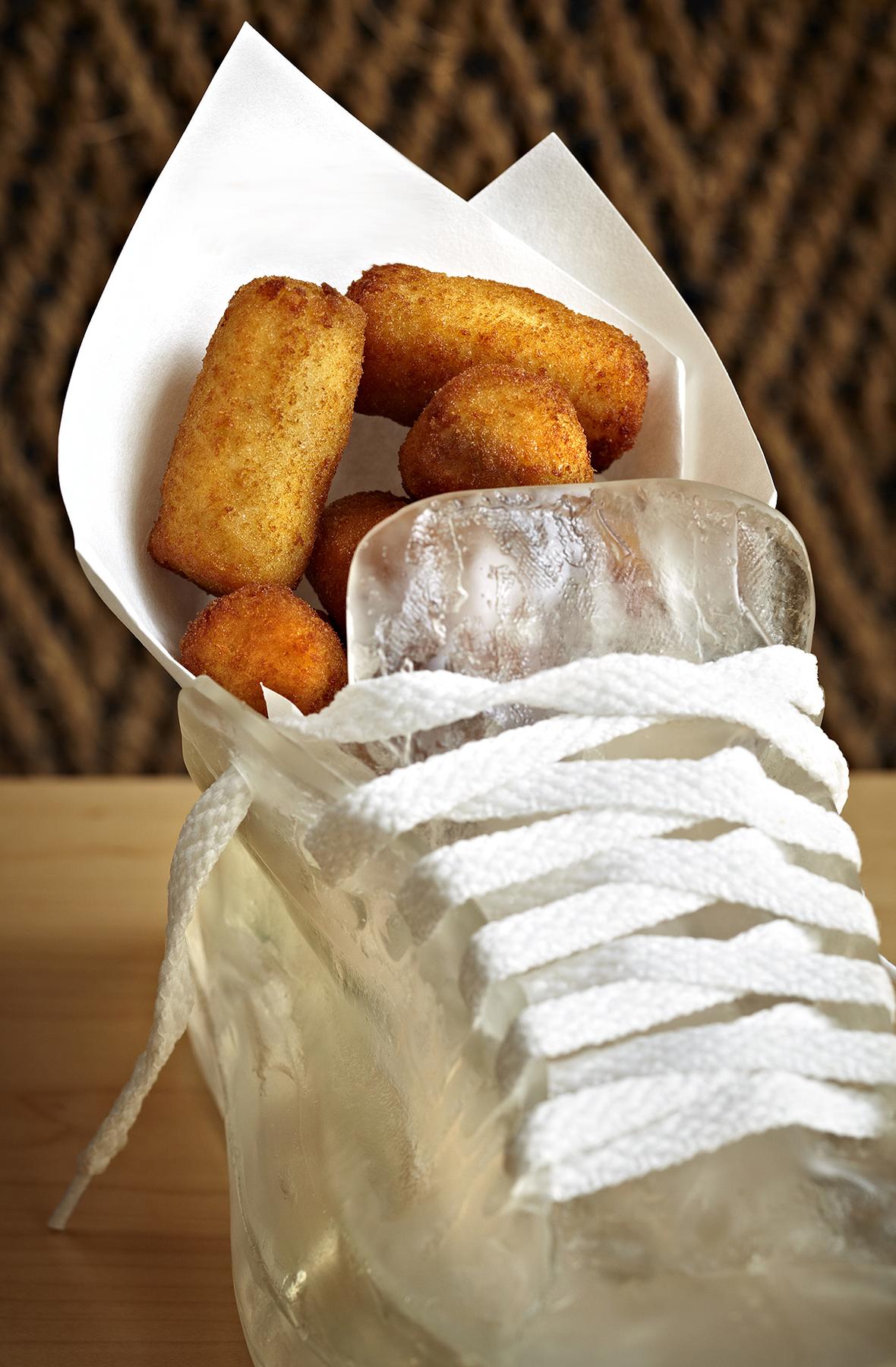 PHOTO: The Bazaar by Jose Andres Beverly Hills
Previous Next
4 OF 6

The Fourth Drink: Smoke on the Water

This was a boozy evening and required many a snack to coat the stomach. And luckily, there was no shortage of glorious pub grub, all straight from the restaurant: buffalo chicken wings, croquettes (served in a shoe), Ibérico ham, and cotton candy foie gras—literally foie gras wrapped in cotton candy, which should be hawked at every fairground in America.

As for the fourth cocktail, Daniel the bartender handed over a Johnnie Walker Black Label-based drink in a smoking vessel. It was meant to look like a pipe, but only one person at the bar seemed to fully comprehend its meaning. Someone else said it looked like a whale. Yet another saw a baby Demogorgon in the decanter.

While I sucked it down, Daniel the bartender told me the tale of this drink: There’s a fella named Adam Pliska, the president of the World Champion Poker Tour, and he hangs out at the Bazaar more than any other person—in fact, lore has it that he shows up 100 nights a year. He fancies Scotch, so they cooked up this concoction for his benefit.

And, no, it was no Ramos Gin Fizz, but I was thankful to Adam Pliska for being a muse to a cocktail that made me feel like an inebriated Sherlock Holmes while drinking it. 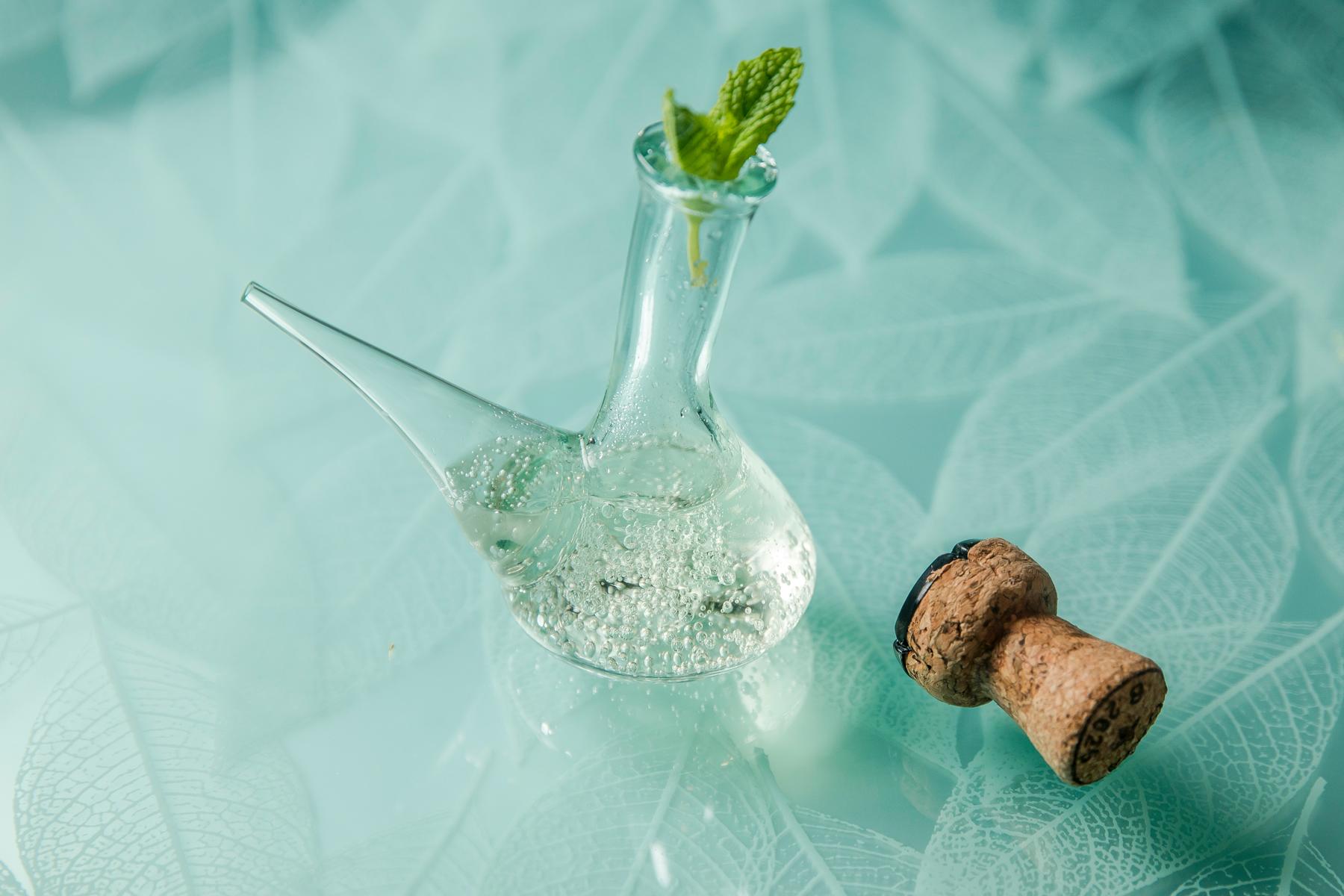 In case you’re unfamiliar with a porrón, it’s a Spanish wine pitcher that looks like a watering can. Tilt your head back and pour it right in. Here’s a video if you don’t believe me. Bottom line: It’s a fancy beer bong.

Smaller in size (hence mini, obviously), we were given porróns of cava. I was told I’d be an expert at porróning once I could hold the pitcher in one hand and fully extend my arm. Let’s just say I’m no expert. But a fella needs goals and now I have a new one.

It was no Ramos Gin Fizz, but who doesn’t like publicly bathing in wine? 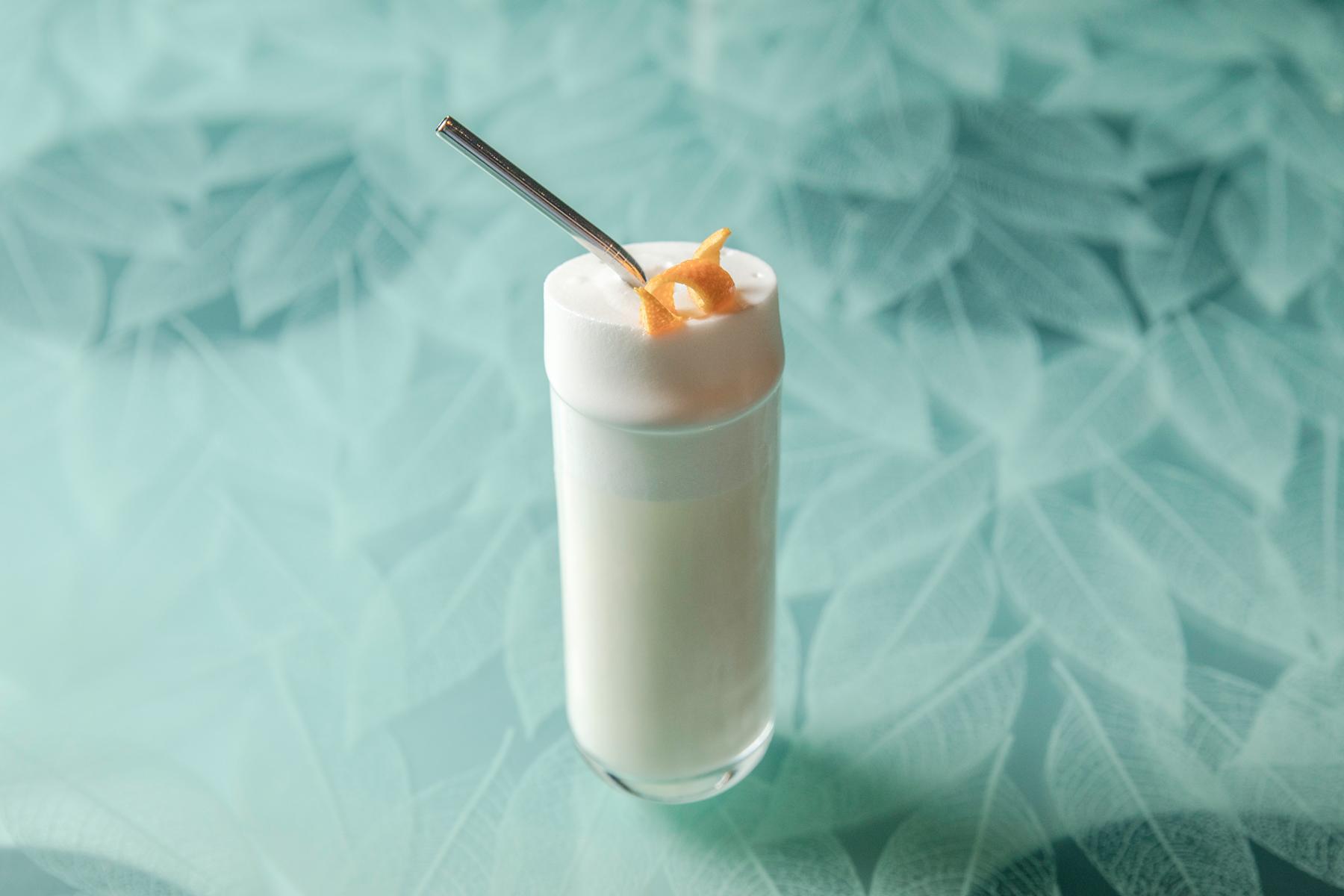 The Sixth Drink: The Ramos Gin Fizz (At Last!)

At last, it was going to arrive. Daniel the bartender was preparing for the feat. He recruited a small bicep brigade, lined them up with shakers, and put them to work. They must have each burned two hundred calories. It went on for awhile. Daniel reiterated that the original recipe called for 12minutes of shaking. Maybe he wanted that authenticity. But I wanted my Ramos!

And there it was.

It looked like a proper Ramos Gin Fizz, but it wasn’t quite as good as the one at the Sazerac. Just barely. It was almost identical. Maybe it was missing that extra layer of New Orleans swamp air. Or maybe it was the fact that at this moment in time my belly was drowning in a delightful witch’s brew of cachaça, brandy, scotch, and cava.

It didn’t matter—it was the second best drink I’d had. It was only nine miles from my house. It came with five other drinks. And, pro-rated, it cost $9. It was enough to make me want to be a Bazaar regular. Watch out, Adam Pliska, I’m going after your record.