The Lucas Museum of Narrative Art promises an exploration of how visual art tells a story from the paintings of Edgar Degas to the animated films of Pixar. George Lucas had been previously courting both San Francisco and Los Angeles with proposals that include architectural designs for the future museum.

As of Tuesday, Jan.10,  George Lucas put an end to months of suspense when it was announced that Exposition Park in Los Angeles won the coveted role as home to the Lucas Museum over San Francisco’s Treasure Island. Unlike its proposed location in San Francisco, which would require a ferry ride to get to, Exposition Park is close to the Expo light rail line, making it accessible to more visitors.

“I always thought Los Angeles was the natural place to spread the vision of George Lucas and [Lucas’s wife] Mellody Hobson, to make art and creativity accessible and inspirational to the next generation,” Mayor Eric Garcetti told the LA Times, adding that it was a “banner day” for Los Angeles. In fact, Lucas has even “expressed interest” in helping figure out how the museum will fit within the area, which currently includes several other museums like the Natural History Museum. The Lucas Museum, whose futuristic design proposals from Chinese architect Ma Yansong, would house 10,000-plus paintings, plus film memorabilia like the original Darth Vader mask.

The majority of the museum’s planned exhibitions will come from Lucas’ personal collection, which includes work by Norman Rockwell, N.C. Wyeth, and R. Crumb, as well as costumes and objects from a number of films including “The Ten Commandments” and, naturally, “Star Wars.” San Francisco Chronicle art critic Charles Desmarais said that Lucas’ items “may just be the core of a great museum.” 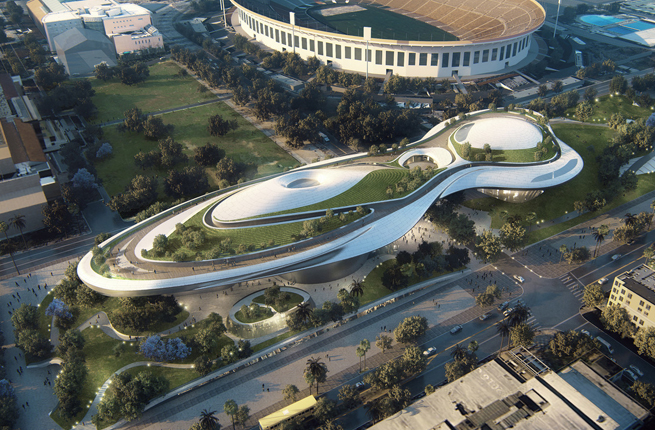 PLAN YOUR TRIP with the Los Angeles Travel Guide.