Tucson’s multi-layered food culture thrives not only in its dining scene, but through a number of local, innovative food projects that keep the region’s heritage food culture alive.

Upon hearing that Tucson, Arizona became the first UNESCO City of Gastronomy in 2015, the logical conclusion is that it must be a city with some darn good eats. While carne asada tacos, Sonoran hot dogs, and prickly pear margaritas are certainly part of the equation, the designation also celebrates Tucson’s millennia-old agricultural tradition that started with the Sonoran Desert’s native Hohokam and O’odham people and evolved with Spanish and U.S. colonization. This multi-layered food culture continues today not only in Tucson’s dining scene, but through a number of local, innovative food projects that keep the region’s heritage food culture alive. If you like food with a story, you’ll love Tucson. Here are some ideas to get you started on your Tucson food journey.

Located just northwest of Tucson, the river valley town of Marana is a modern-day haven for local farmers and producers, but what makes it especially unique is that it is home to easily accessible archaeological sites linked to the first evidence of modern agriculture in the United States. On a Marana Gastronomy Tour, participants get an immersive, full-circle experience that rolls the Tucson area’s food history and the current innovations of the local dining scene into one afternoon. Seasoned experts with personal connections to the region lead these outings.

Tour participants can pick from one of two tours, depending on their tastes. The traditional, slightly highbrow, Marana Gastronomy Tour, visits two archeological sites, including the recently discovered Las Capas, which is oldest known agricultural irrigation system in the U.S. The tour concludes with a small plate and cocktail tasting at The Ritz-Carlton, Dove Mountain, which is known for creating innovative dishes featuring heirloom and wild ingredients such as the ancient tepary bean, cholla cactus buds and barrel cactus seeds.

The other, more salt-of-the-earth tour option, titled “A Taste of The Wild: The Marana Wild Foods Gastronomy Tour,” also visits Las Capas, but then delves into the more than 450 edible wild foods that grow in the Sonoran Desert. After participants get a chance to do a little foraging of their own, the tour concludes with a tasting at Marana’s Catalina Brewing Company, where folks can sample beers made using local ingredients, including the brewery’s flagship Mesquite Agave Ale. Food for this tour’s tasting menu is brought in from the local Bean Tree Farm, which specializes in wild-crafted foods featuring ingredients sourced from the Sonoran Desert. Local Fiore di Capra goat cheese and heirloom grain loaves from Tucson’s Barrio Bread bakery round out this wild feast.

INSIDER TIPIf Sonoran hot dogs and pan dulce tempt you more than heirloom and wild-crafted vittles, Grey Line Tours (operator of the Marana Gastronomy Tours) also offers a Best of the Barrio tour visiting modern-day eateries in South Tucson where you’ll sample classic Northern Mexican-inspired foods that are guaranteed to hit all of your sweet and savory cravings.

The mission of the San Xavier Co-op Farm is to invigorate native agricultural and wild food traditions in ways that are environmentally, culturally and economically sustainable for the Tohono O’odham people. Examples of wild foods processed on the farm include mesquite tree pods—which are milled into sweet, gluten-free flour, and the nutrient-packed, asparagus-flavored cholla cactus buds. Heirloom crops include the heat and drought resistant tepary beans and the large, pumpkin-like Ha’l squash—“Ha’l” literally means “big squash” in the Tohono O’odham language.

The San Xavier Co-op Farm Store is located in the San Xavier District, which is also home to the landmark 18th-century Mission San Xavier del Bac. The mission still serves as an active Roman Catholic Church for the Tohono O’odham people and is less than mile away from the farm.

INSIDER TIPCraving some fresh, hot (and admittedly indulgent) fry bread? You can get it, and some cinnamon iced tea too, if you head over to Café Santa Rosa Go:k. This small café located right across from the Mission San Xavier del Bac specializes in dishes that feature traditional Native American fry bread such as the “Indian taco.”

The Mission Garden Project is a museum with an atypical set of artifacts—living, thriving fruit orchards and vegetable gardens that illustrate how different groups have farmed in the Sonoran Desert during the last 4,000 years. 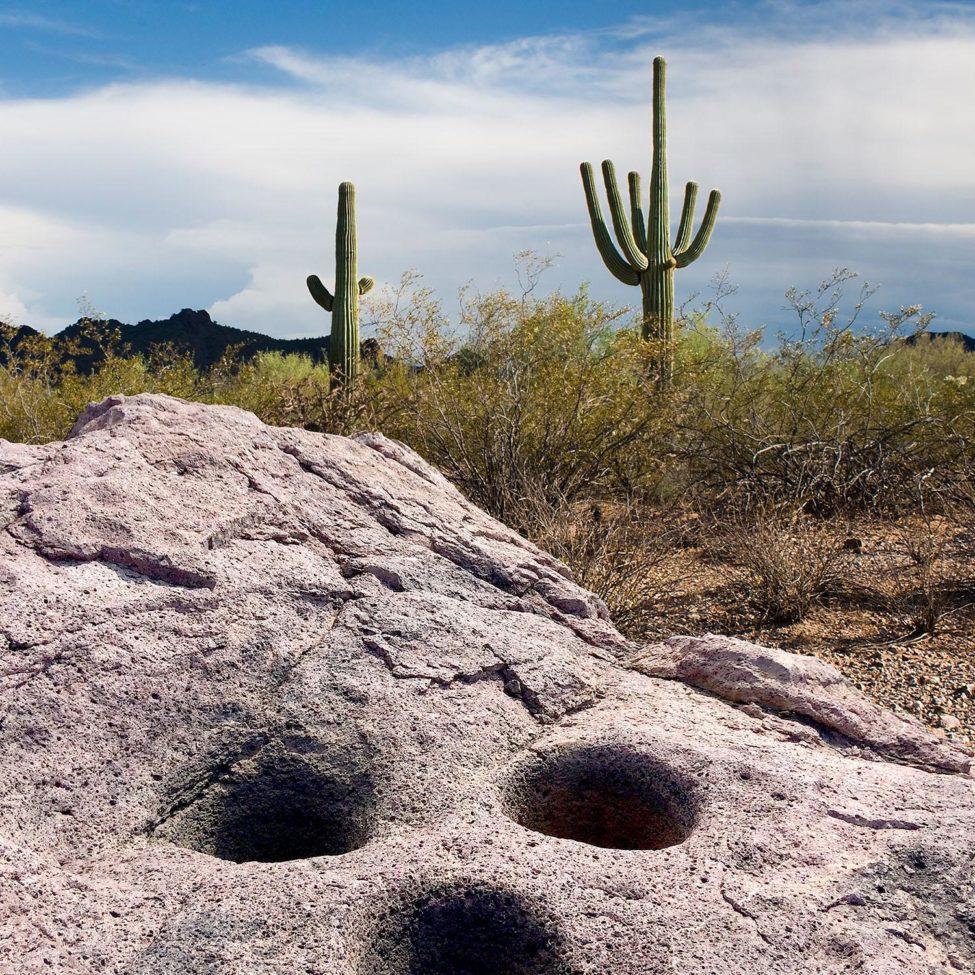 Located at the base of Tucson’s Sentinel Peak, this six-acre destination mimics the design of a Spanish Colonial walled garden­­­—a nod to the San Agustin Mission that stood on the garden’s site during the 18th century.  The various gardens throughout the Mission Garden Project demonstrate the longevity and diversity of agriculture in the Tucson area with examples of agricultural traditions from the Early Agricultural period to present day.

The orchards feature trees first planted in the area by missionaries during the 1700s, such as the white pomegranate and quince. A Chinese garden recalls the period of approximately 1880-1920 when Chinese families came to Tucson during the era of railroad building through the Southwest and grew special Chinese crops for their own use such as bok choy, wintermelons, fuzzy melons, and bitter melons. In the Mexican garden, fans of hibiscus tea (a.k.a. agua de Jamaica) can see the roselle plant that produces the flowers for this refreshing drink.

INSIDER TIPThinking you might like to try your hand at growing some heirloom crops at home? Head to the Native Seeds/SEARCH retail store, where you can purchase indigenous heirloom vegetable and wildflower seeds, pre-packaged food items made with native ingredients, and other thoughtful local gift items.