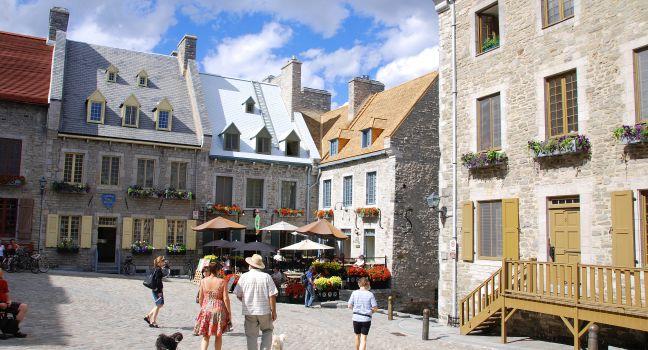 The houses that encircle this cobblestone square, with steep Normandy-style roofs, dormer windows, and chimneys, were once the homes of wealthy merchants. Until 1686 the area was called Place du Marché, but its name changed when a bust of Louis XIV was placed at its center. During the late 1600s and early 1700s, when Place Royale was continually under threat of British attack, the colonists moved progressively higher to safer quarters atop the cliff in Upper Town. After the French colony fell to British rule in 1759, Place Royale flourished again with shipbuilding, logging, fishing, and fur trading. The Fresque des Québécois, a 4,665-square-foot trompe-l'oeil mural depicting 400 years of Québec's history, is to the east of the square, at the corner of rue Notre-Dame and côte de la Montagne.