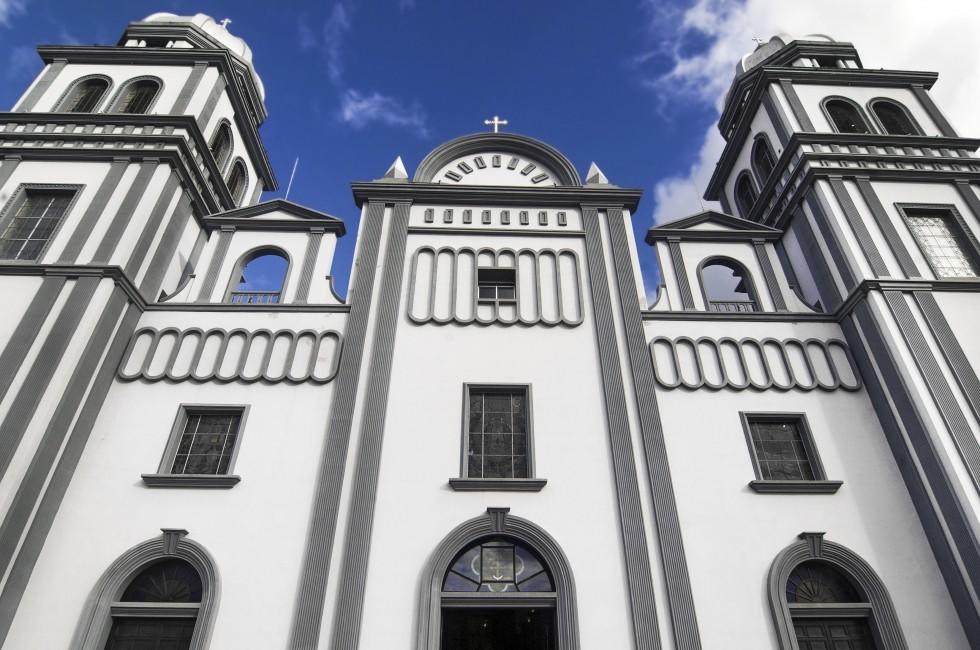 No one we know mentions Tegucigalpa, Honduras's congested capital, as their favorite place in the country, but on a sunny afternoon when there's a breath of a breeze, you may decide you want to linger a while longer. This city of more than 1 million people sits in a valley surrounded by beautiful pine-covered mountains, and at an altitude of 3,300 feet, you can't beat the moderate springlike climate.

There are plenty of nearby villages to explore, and national parks filled with exotic flora and fauna are a short drive away. But the city streets, sometimes set at a sharp incline, can be just as exhilarating. Plaza Morazán, the lively main square, is a great place to get to know the people. The very heart of the country's largest city is a place to gossip with neighbors, get your shoes shined, and enjoy an ice-cream cone. Take a peek inside the beautifully restored cathedral. Don't miss Iglesia Los Dolores, either; it's several blocks northwest of the square, and has rows of souvenir stalls to explore. A couple of newish blockbuster museums have won rave reviews in world circles and complement the small existing collection of galleries and exhibition halls in the capital. You'll eat well here, too: A trip back to Tegucigalpa will be a chance to chow down on something other than the beans, rice, and chicken you've been eating elsewhere in Honduras.

Was there ever a more fun place name to say? Practice it: tay-goo-see-GAHL-pa. But by about the time you master it, you'll realize that everyone affectionately and pragmatically shorthands it, spoken and written, to Tegus (TAY-goose). Generations of tourist brochures dutifully repeated that the city's name is a contraction of two words from the language of the area's indigenous people: teguz (silver) and galpa (hill). That's their story, and they're still sticking to it. Sounds like good public relations, but historians now doubt that version because the indigenous people here were not mining silver. The accepted meaning these days, among scholars at least, is not quite as glitzy: Tegucigalpa probably means "the place of colored stones." The first Spanish settlers did see that there was silver, nevertheless, and the mining industry brought wealth to the region. The city spread down from the hills and across the Río Choluteca. Though Tegucigalpa dates from 1578, it did not become the country's capital until 1880.

With its winding streets lined with colorful houses built into the hillsides, the city retains many characteristics of a provincial town. But the surge in population has brought rumbling buses and blaring horns, and economic doldrums, natural disasters, and political turmoil have taken their toll on Honduras's capital through the decades. Most visitors to the capital do focus on the latter—the negatives—unfortunately. They head out-country the minute their plane lands and don't return until it's time to fly home. And make no mistake: you should not sacrifice precious beach/island/ruins/nature time for extra days in the capital. But since Tegucigalpa does take some time to grow on you, it's all the more reason to spend more time in the city than most people give the place. If you come to the capital on business or with one of the many mission groups that work in urban health care or education—the needs are great here—you will get a chance to focus on the former, that "big old provincial town" side to Tegucigalpa.

Recommended Things to Do in TegucigalpaSEE ALL

Find the perfect tours and activities in Tegucigalpa.

Recommended Hotels in Tegucigalpa SEE ALL

Recommended Restaurants in Tegucigalpa SEE ALL

Find the best food tours and activities in Tegucigalpa.