How to Spend a Perfect Day in Istanbul

There are as many perfect days in Istanbul as there are people who encounter it. Although one day is hardly enough time to learn the secret history of Istanbul, this itinerary will take you through Istanbul’s most significant historical and cultural sights. 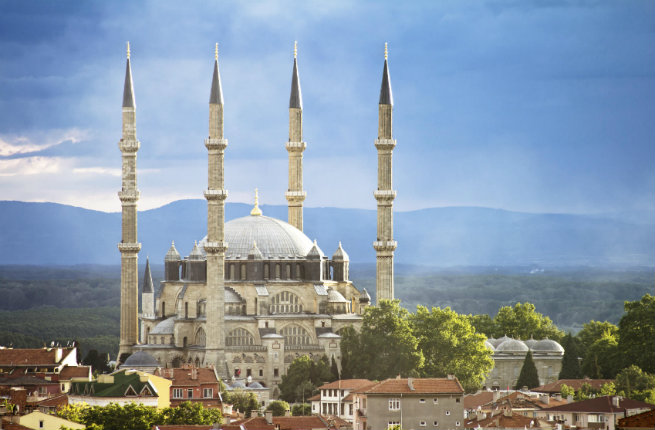 In the Mediterranean, breakfast is usually light, something to fortify you quickly for the start of a new day. The typical Turkish breakfast, available in almost any hotel or streetside cafe, consists of bread, cheese, olives, tomatoes, cucumbers, and perhaps a few extras like a boiled egg or a bit of butter or jam. Be sure to look for kaymak, a traditional cheese served drizzled with honey.

For the past 15 centuries, visitors to Istanbul have made Hagia Sophia (Ayasofya) their first stop. You should, too. Built as the cathedral of the city in 532, this magnificent structure has been at the center of the religious and cultural life of Istanbul ever since. As you wait in line for tickets, look behind you at the open square stretching south to the Blue Mosque (Sultanahmet). You are standing in one of the oldest public squares in the world, which dates back to the third century BC, when it was filled with classical statues and merchant stalls. Although floods of tourists pour into Hagia Sophia daily, once inside you will have plenty of space and as much solitude as you like to contemplate a building where every stone is history. A Christian church for nine centuries, it was later transformed into the sultan’s mosque—a position it held until 1935, when it opened as a museum.

Insider Tip: Don’t be surprised if you pick up a new friend along the way, even an American one. People are friendly in Turkey, but not that friendly—your new friend, who insists on hearing all about you, is actually selling carpets. A smile and a polite but firm good-bye is enough to send him off to more promising game.

After an hour or two in Hagia Sophia, let yourself drift past the fountains, greenery, and shouts of “Bosporus Tours!” toward the Blue Mosque, which is worth a short visit. Completed in 1606, the Sultanahmet mosque gets its nickname from the stunning blue Iznik tiles that decorate its walls and columns.

Next, head southeast (or to the left, if coming from Hagia Sophia) and do some window shopping in Arasta Bazaar, a long, open pedestrian mall. The Blue Mosque and these shops are built over the ruins of the ancient palace of the Byzantine emperors. Once a glittering complex adorned with every luxury, it now lies hidden beneath the winding streets of the district. You can, however, peek into one of its rooms by entering an unassuming door along the line of shops.

Down a few stairs, and many centuries, is the Great Palace Mosaic Museum (Büyük Saray Mozaikleri Müzesi). Seldom visited by the tourist throngs only a stone’s throw away, this small museum holds exquisite floor mosaics from the emperor’s private quarters, all in situ. Animals, spirits, peasants, and hunters all come to life in these rich depictions of a long-ago Istanbul.

Continue around the back of the Blue Mosque (along Tavukhane Street) and come out into the wide park area with two obelisks. One of the two, a blocky thing that looks ready to fall, was built by the medieval Byzantines and was once covered in bronze. The other is a real Egyptian obelisk that is well over three thousand years old. Both of them once decorated the central divider of the city’s ancient chariot race course, known as the Hippodrome. Where you now stand, the charioteers once thundered past to the cheers of one hundred thousand fans packed into the stands. The stadium is mostly gone, much of it used in the building of the Blue Mosque. Between the obelisks, though, you can still see the bronze stump of the famous Serpent Column of Delphi, forged by the Spartans and other victorious Greeks after the Persian Wars. The heads were lost in 1700. 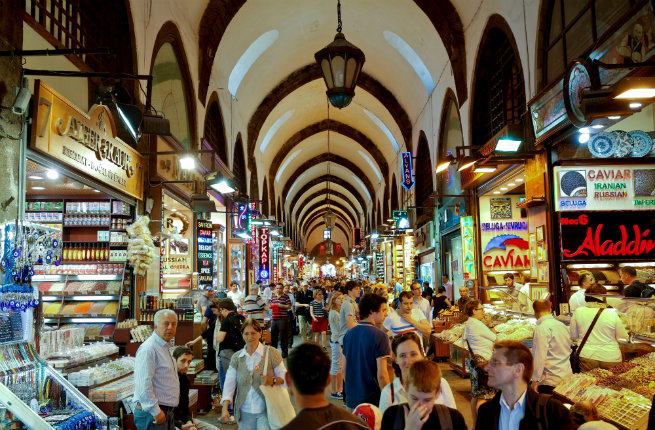 Around lunchtime, make your way back toward Hagia Sophia until you hit the main street with the tram lines, known as Divan Yolu Caddesi. This was the end of a Roman road, the Via Egnatia, which connected Istanbul to the rest of the empire. For more than a millennium it was the city’s main thoroughfare, and it remains important today. If you are looking for an authentic Istanbul lunch experience, go no further. Tarihi Sultanahmet Koftecisi serves some of the best grilled köfte (lamb meatballs) in the city. In fact, they do it so well that they serve little else! Relish the ordered chaos of this place, find a table, order your köfte, and absorb the smells, sounds, and sights of this most fascinating city.

You can pick up the tram across the street or walk off your lunch, following Divan Yolu to the Çemberlitaş stop. The name means “Burnt Column,” and you will see the eponymous monster as soon as you arrive. It is made up of massive porphyry drums that were once deep purple and bound together with bright bronze laurels. This was the founder’s column, built by the Roman emperor Constantine and placed here for the dedication of his new capital city in 330. It was once at the center of a wide circular forum filled with beautiful statues and monuments. Today only the column remains, burnt by countless city fires over nearly 17 centuries.

If you weave your way through the streets to the northwest you will come upon the famous Grand Bazaar. Give yourself some time to get lost in the maze of this medieval mall. And if you decide to purchase something, remember . . . haggle! After so much walking it is also nice to relax and people watch amid the nooks and crannies of the covered markets. Try Fes Café at the center of the bazaar, where you can have some chai or Turkish coffee along with a few sweets. If you found the köfte a little too adventurous, Fes also has some lovely sandwiches to tide you over. You could while away the afternoon right here, but if you’re ready for more exploring, hop in a taxi and ask the driver to take you to the Chora Museum (Kariye Müzesi). But tell him that you would also like to see a bit of the walls along the way. Your driver will take you along the ancient Roman roadways, now buried beneath asphalt and concrete, to the ruins of the city’s land walls that stood impregnable for a thousand years. At last you will land at a small museum nestled among trees and cafes. In the Middle Ages, this was an affluent suburb known as Blachernae; the emperor himself had a palace not far from here. This little structure, which seems so inconspicuous from the outside, was built in the fourteenth century as the Church of the Holy Savior. Its walls and ceilings were completely covered in frescoes and mosaics during the Byzantine Empire’s greatest renaissance. Plastered over when the church was converted into a mosque in the 16th century, the stunning images look out again, full of vibrancy from the twilight of an empire. 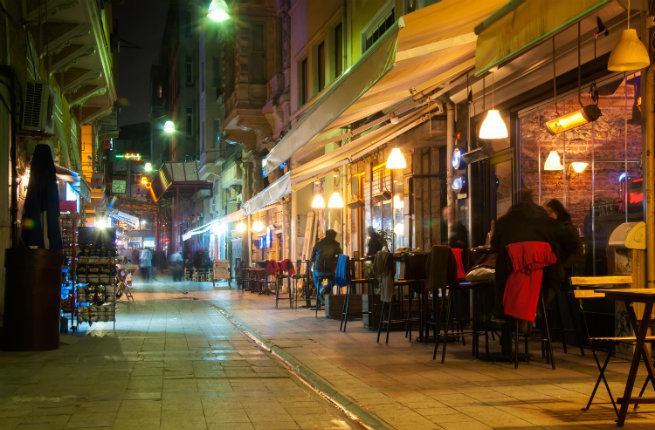 As the evening hours approach it is time to leave the ancient city and head across the Golden Horn to modern Istanbul. The best place to start is on İstiklal Caddesi, a pedestrian-only street that marches up the hill to Taksim. During the 1800s, European expatriates lived and worked in these districts, bringing with them their customs along with their money. The French particularly dominated, remaking the quarter into something right out of Paris. Originally called the Grand Rue de Pera, İstiklal Caddesi was flanked by shade trees and promenade-worthy sidewalks. Today it is a pulsing artery of nightclubs, restaurants, bookstores, and shops. There are so many restaurants to choose from here, it is difficult to pick one. Çukur Meyhane is a fantastic place for meze (sort of Turkish tapas). Everything is good, but be sure to try the fish ravioli (manti). If you fancy something with a bit more of a turn-of-the-century European flair, walk east from İstiklal Caddesi to the “French Quarter” near Hayriye Caddesi. This steep-sloped area is filled with colorful buildings housing art galleries, cocktail bars, and trendy restaurants. At night the jazz wafts through the streets along with the smells of the grilled fish. Cezayir has excellent food and cocktails. The Artiste Terasse has stunning views.

From here on out, be ready to improvise. Istanbul has so much that is hidden, tucked away along a side street or in a garden or perched on a rooftop. Spending a perfect day in Istanbul means finding something new, beautiful, delicious, and unexpected.

Thomas Madden is the author of Istanbul: City of Majesty at the Crossroads of the World