Not So Alone in Russia: A Solo Traveler Becomes One of the Crowd 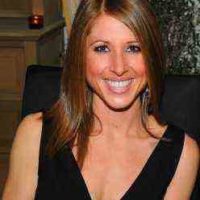 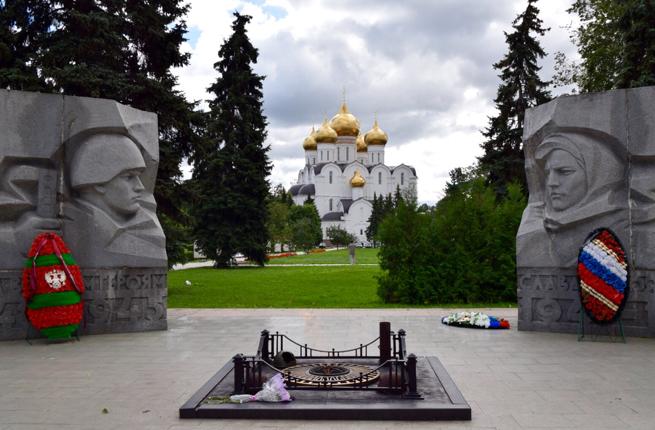 Russia had long been the pipe dream on my list of travel goals, its candy-colored cathedrals taunting me with their unreachable points. It seemed so unattainable—I’d only known a few people who’d gone, none of them traveling solo, and the winter looked brutal. I’m a notoriously independent traveler with no patience for the cold, so I knowing that I couldn’t handle a Russian winter, I made plans to visit once the snow was fully melted. But the solo travel seemed more difficult to wrangle. 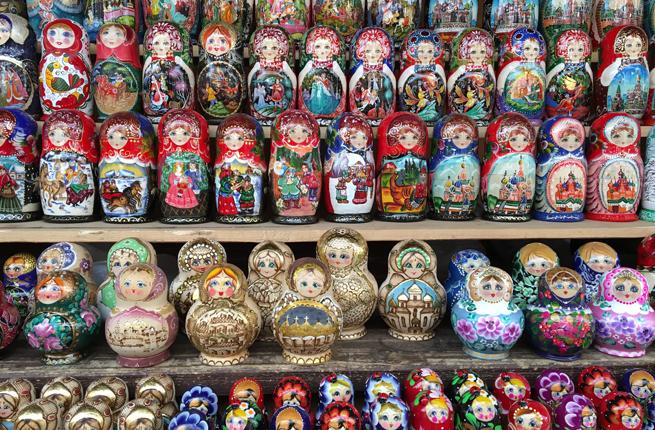 My lack of knowledge on Russian history meant that I had a ton of reading and researching to do before I could even begin to plan out which landmarks to visit, and, from what I read, it seemed that tour groups were given priority access to the main sights, leaving the solo travelers to spend all day waiting in line to hopefully catch a glimpse of a Faberge egg.

I balked. In the past I had always knocked group travel, preferring to let my whims dictate my agenda and enjoying the freedom that comes with not being stuck on a tour bus all day. But I knew I needed help with this trip, so I broke down and booked myself on two separate tours; one to explore Moscow and St. Petersburg on a small group tour with Travel All Russia, and one to check out the Golden Ring on a private tour with RusMoto Travel.

The second I clicked confirm on the website, a wave of dread came over me. What had I done? My fears of navigating the country switched to fears that I would be the only one alone in the group … or the only one below the age of 50. Had I just given up my freedom to explore the way I wanted?

My body froze as the customs officer’s words resonated in my ears. “Are you meeting friends here in Russia or are you traveling alone?”

I stood there with my passport and paperwork clutched between my fingers at that little counter in the Moscow airport, it finally hit me: I didn’t know a soul within thousands of miles from where I stood. The reality quickly sank in that I was truly on my own … alone in the former Soviet Union.

After passing through customs, I hopped in a cab to head to the Marriott Courtyard City Center hotel where I would soon meet the other participants on my first ever group tour with Travel All Russia. This would normally have been where I dropped my bags off quickly and hit the ground to start exploring my new surroundings, but I found myself instead with first-day-of-school jitters. 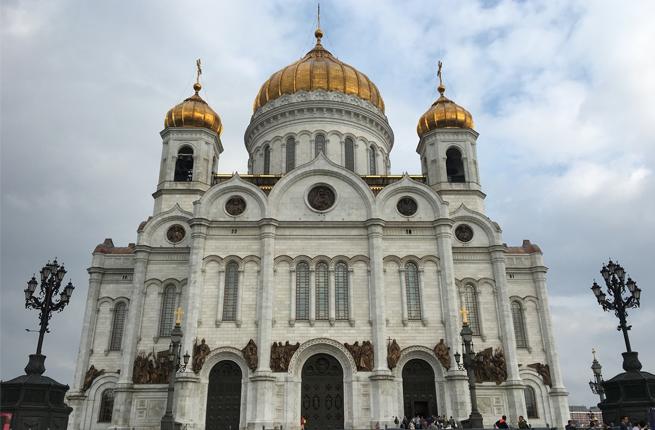 I entered the lobby to find a group of three couples, two sets of friends traveling together, and three other solo travelers, and couldn’t have been happier to see one of the singles was even younger than me. For two days, we spent mornings and afternoons together walking around Moscow’s biggest landmarks and slowly warming up to each other with polite conversation, but at the end of the tours, I retreated into solitude for dinner and nighttime plans.

The free nights in Moscow gave me the chance to do a little exploring on my own, and I was able to score an amazing reservation (for one) at restaurant Twins to see the Berezutskiy twins reinterpret Russian cuisine in their trendy new space. Both brothers worked separately for years—Sergey training with Anatoly Komm and Grant Achatz, and Ivan working his way through El Bulli and El Celler de Can Roca—and the irony wasn’t lost on me that I was dining alone in a restaurant made famous by pairing up.

After a day spent getting to know the other group members while exploring the Kremlin, I was tempted to invite someone from the group out with me, but chickened out and instead treated myself to a night at Vladimir Mukhin’s highly acclaimed restaurant White Rabbit. After one of the most entertaining meals of my life where each dish was presented in such surreal ways (an appetizer of “scent” and an amuse bouche served on edible flower petals), I found myself wishing I had someone to talk to about having just gone “down the rabbit hole.”

On day three, the group spent a full day riding the Sapsan train to St. Petersburg. The lack of food, guidance, and Russian fluency on the train finally solidified our connection. Maybe it was the new surroundings, the camaraderie that came from sharing snacks of breath mints and beef jerky, or the grogginess that comes from the third day travel slump, but when we arrived at the Corinthia Hotel St Petersburg, we did so not as a group of individuals, but as a single unit of people. 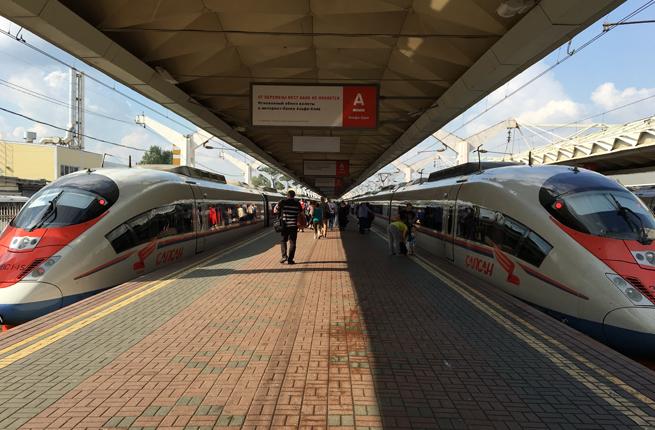 The rest of the time in St Petersburg was spent sharing snacks from each other’s backpacks, laughing through happy hours at places like Dreamer’s Café and doing vodka shots at lunch before heading to classy evening ballets together at the Hermitage Theatre. Although we still were given free time at night and during some afternoons, we found ourselves choosing to share those free time together, gleaning collective knowledge about Russian history, food, and culture. Age didn’t matter. Marital status wasn’t an issue. This group of strangers shaped St. Petersburg and changed my mindset about group travel, and I found myself missing them as I boarded the train to Moscow alone.

(Major accompanied travel perk: it was so nice to have more than selfies and scenic shots from a trip!) 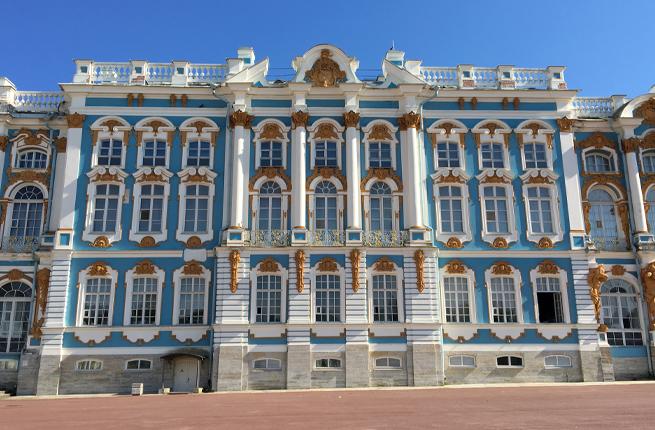 I got off the train and expected to jump back into solo traveler mode when I met my next guide at the station. I had emailed with Alex Nikonov of RusMoto Travel about joining one of his BMW motorcycle tours so I could get a glimpse of the “real Russia” outside the city. Instead, he offered to personally take me around the Golden Ring by car with his fiancé so I could really immerse myself in the countryside.

The three of us set off toward Suzdal. I had planned to use the three hours in the car to catch up on some work and reading. Instead, I spent that time sharing music playlists and swooning as the couple opened up about how they met and he had proposed. We stopped along the way to buy berries and freshly foraged mushrooms from roadside vendors for the dinner that awaited us at the Guest House Lepeshinykh. 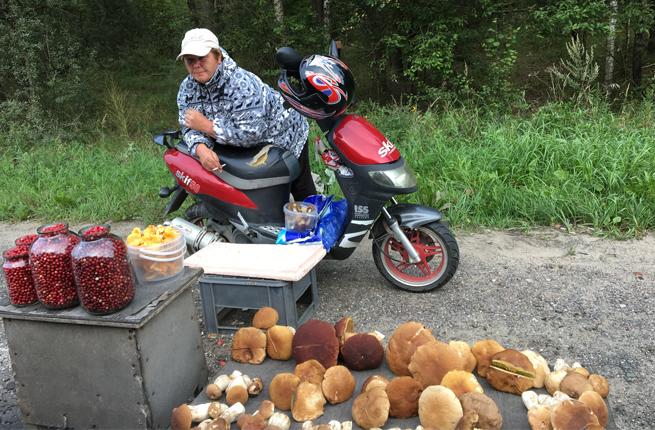 Time flew by and before I knew it we were checking in at the guest house, accepting warm hugs from a plump woman who greeted me in unapologetic Russian. Context clues helped me understand her directions, and pretty soon I was assisting in her tiny kitchen, cutting our foraged mushrooms for our dinner of kotlety (Russian meat patties) served with boiled potatoes and homemade pickles, while Alex and his fiancé prepared the sauna in the backyard for a traditional Russian banya experience.

I left the cutting board behind and went to change for the sauna. Alex and his fiancé were already there, sipping hot black tea out of ornate teacups. The Russian banya bonded us further: clothed only in my swimsuit, I joined the couple sans makeup or shame in a sauna heated well past 200 degrees Fahrenheit. I sweat profusely in front of these strangers-turned-besties.

Before long, we were back on the road heading toward our next hotel, the Kostroma Golden Ring Hotel. We picnicked on a dock in a village, ate cured fish bought from a fisherman in the tiny town of Ples and sipped home-brewed mead poured out of old two-liter Pepsi bottles. We sat in silence just once over the next few hours, and purposefully, in order to take in the peaceful scene around us.

Alex led us up a hill to a hidden gem restaurant he had discovered on a previous trip called Chastniy Visit. In conversation, we discovered that Alex and I had both studied yoga in the same Balinese city just months apart. As we got back in the car, he told me that we would cancel the last stop on the tour so he could take me to his favorite place in Russia: a yoga dacha (summer house) off Lake Pleshcheyevo. How could I have found such a rare and personalized spots on my own? The luck was in the numbers. 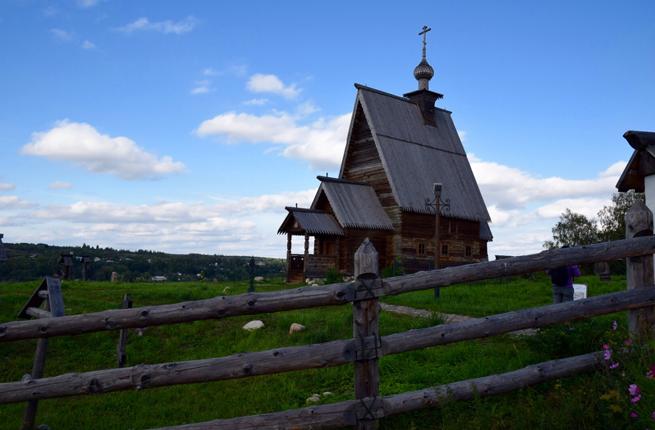 As we entered a small village in the Yaroslavl Oblast, Alex stopped the car to give a ride to an elderly woman who was struggling with bags on the side of the road. “We have to look out for each other in this life,” he said when I asked him if he made it a habit of letting strangers into his car. “She needed help, and I was there. It’s as simple as that.”

His nonchalant statement struck a chord with me, and I realized that was exactly the purpose of my trip: to learn how to be a part of a bigger whole. My entire time in Russia I had found myself looking out for strangers in little ways, like sharing my guidebooks, cab fare, and snacks, and in turn learning the even harder lesson of how to accept help and generosity from people without feeling guilty. After nearly three weeks spent traveling through the country, I finally felt that I had experienced the real Russia. Only it wasn’t in the countryside, the cuisine, or even in the historic landmarks but the people I met while I was there. I may not be a group travel convert at this point, but I will forever remember the beautiful community I became a part of during my time “alone” in Russia.