Experience the best of three worlds in the Azores.

Over the past 20 years, every time I’ve flown home from mainland Europe, I’ve looked out the plane window a few hours into my journey to catch a glimpse of the Azores, an archipelago of volcanic islands scattered across nearly 300 miles of the North Atlantic. If the day was clear enough, I’d look down at the lonely specks in the middle of the ocean and wonder what it was like down there and whether I would ever get to visit. I never really looked into it, though, assuming it would be too expensive or too difficult to travel somewhere so remote and, to my mind, obscure.

I was largely ignorant about the islands, aside from the fact that they are part of Portugal, so I was very excited when I had a recent offer to visit two islands (of the nine that are inhabited) in the Azores for a week. Even my advance research didn’t quite prepare me for what I found—vibrant small cities with vivid architecture and thriving arts scenes; a perfectly temperate climate that hovers in the mid- to upper 70s year-round; rolling, fertile farmland forming a patchwork across vast volcanic calderas; and vistas of heart-stopping beauty, from jagged seaside cliffs to dazzlingly blue crater lakes fringed by countless flowers. I had landed in the perfect combination of Iceland, Hawaii, and Ireland, without the droves of tourists and, I was soon to find out, also without the increasingly hefty price tag of those destinations.

At the beginning of the 15th century, the Azores sat on the edge of the known world, at least for Europeans. Battered by storms and high seas more than 900 miles off the coast of mainland Portugal, the islands bore evidence of earlier visits, but nobody thought to attempt settling there until Portuguese explorers landed at Santa Maria and São Miguel in the 1420s. By 1449, settlers began arriving from the mainland, eventually occupying the nine largest islands. Although today the islands are more than 90 percent Roman Catholic, most of the initial inhabitants were Sephardic Jews fleeing the Inquisition; other settlers migrated from Madeira, about 600 miles to the southeast, as well as from North Africa.

Over the following centuries, European ships following the trade winds around the world increasingly sought shelter in the deep harbors of the Azores, stopping to replenish supplies on their long journeys. They also would pick up protective escorts to see them safely to their home ports, as the islands attracted pirates from all over Europe and Africa who would lay in wait in the islands’ numerous caves and hidden coves to raid merchant ships laden with precious metals and spices. To this day, the islands are a popular destination for explorers seeking sunken treasure.

The islands also flourished as a center of economic and military strategy through the end of World War II. In the post-war period, hard economic times led to a major out-migration of Azoreans to the United States (particularly Massachusetts, Rhode Island, California, and Hawaii), Canada, and Brazil. Today, the population of the Azores is significantly lower than it was 100 years ago, but that’s slowly changing as migrants are returning home after building their lives abroad.

The most obvious attraction of the Azores is their stunning natural beauty; most human development is restricted to the coast, with the interior of the islands left open for farming or nature preserves. The archipelago sits atop the junction of three tectonic plates, resulting in dramatic volcanic landscapes, and its location almost exactly in the middle of the Atlantic Ocean brings a moist, temperate climate that supports lush forests and mountainsides blanketed with flowers. Few species of plants are endemic to the islands, but centuries of seafaring visitors have introduced flora from all over the globe, most famously hydrangeas, which have now multiplied into the millions across all the islands, lining miles of the roadways with giant blooms throughout the spring and summer. On Terceira, giant groves of fragrant lilacs bloom each spring as well.

Not surprisingly, the dramatic landscape is a major draw for adventure travelers. Hikers can scramble along seaside cliffs or up steep inland peaks that afford views of deep green and blue crater lakes like Sao Miguel’s Lagoa das Sete Cidades or Lagoa do Fogo, perhaps the most famous sight in the Azores. Mountain bikers and horseback riders can explore the trails as well. After a day of exploring, many visitors enjoy soaking their tired muscles in local hot springs; Parque Terra Nostra, a botanic garden in Furnas, on São Miguel, features a vast pool with a constant stream of therapeutic iron- and magnesium-rich water the temperature of the most perfect hot bath (note: don’t wear a light-colored bathing suit, as the iron in the water will stain the fabric).

The ocean also offers numerous options for adventure. Conditions permitting, scuba divers can explore offshore caves where giant rays glide through crystalline water or scan the seafloor around harbors looking for sunken pirate ships. People who prefer to stay on top of the water can charter fishing boats, view shipwrecks through glass-bottom boats, or channel their inner Ahab on whale-watching excursions that follow the sperm whales that hunt for giant squid around the islands. São Miguel’s Ribeira Grande draws surfers from all over the world for summer competitions.

People who prefer less extreme pursuits can descend into Terceira’s Algar do Carvão, a fern-fringed extinct lava tube, or travel to the village of Biscoitos (named for its smooth beach pebbles, or “biscuits”), where jagged volcanic rocks have formed natural swimming pools sheltered from the strong currents and crashing waves of the ocean on the other side. 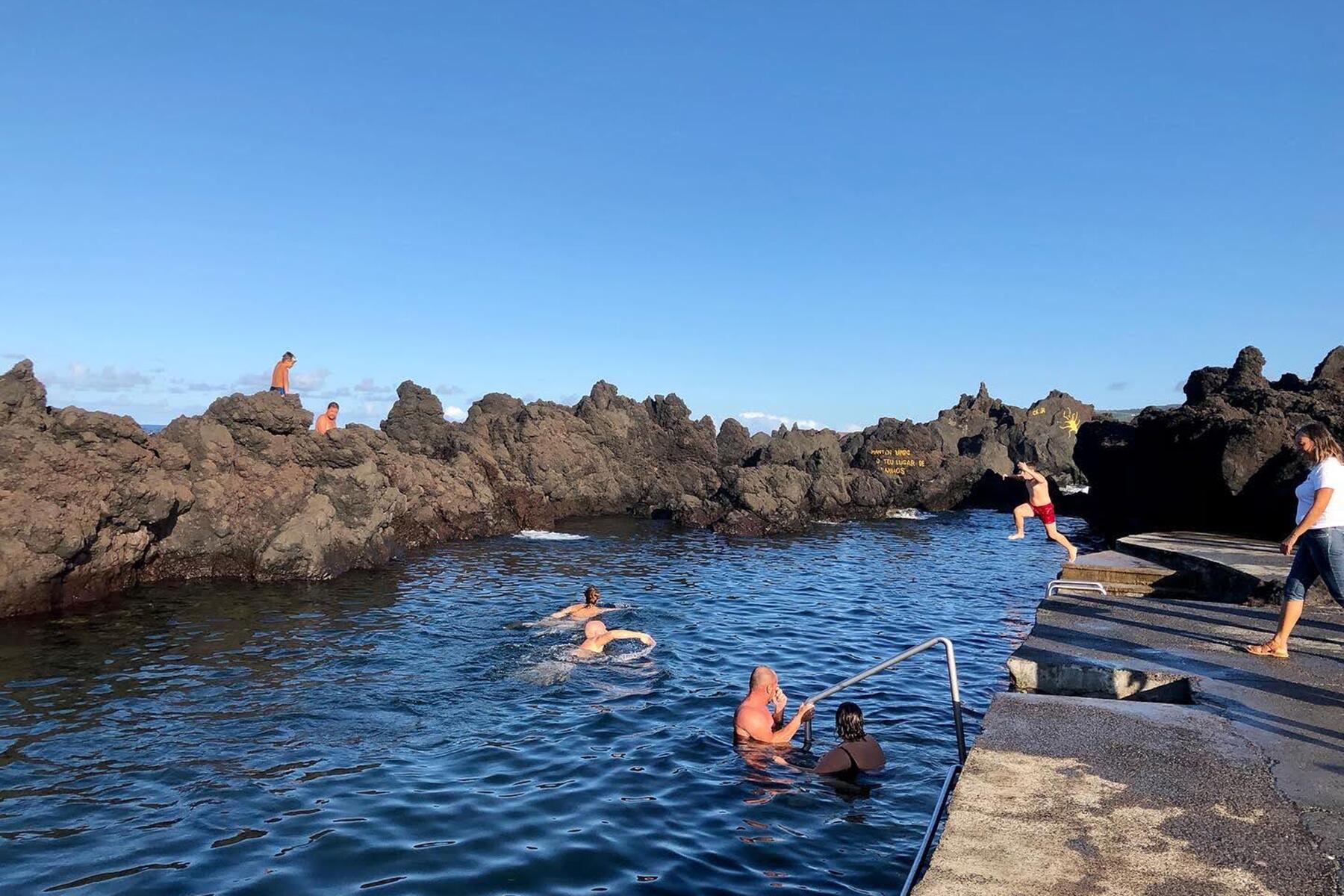 While the Azores aren’t very densely populated—about 240,000 people live among the nine islands, with more than half on São Miguel—the small cities are anything but sleepy. Local orchestras and theater groups thrive in even the smallest villages, and especially on Terceira, cultural and religious festivals enliven the streets and plazas nearly year-round.

Visitors will also delight in the islands’ cuisine. While there are no Michelin-starred restaurants, the fresh, local fruits, vegetables, meats, and seafood mean that even the humblest café will feature meals to please any palate. Local specialties from the sea include fresh limpets and giant barnacles pried from the rocky shores, and each island has a signature cheese made from local milk (the Azores provide about 30 percent of Portugal’s dairy). A must-try dish is the Cozido das Furnas, a savory stew simmered for many hours in a cauldron buried in the ground and heated by the hot springs bubbling just beneath the earth’s surface. Sweet treats abound, from the classic Portuguese pasteles de nata to more local pastries like Terceira’s Dona Amélia cake (a spiced molasses confection) or Queijadas de Vila Franca, a soft, rich, eggy pastry available throughout São Miguel.

As COVID-19 restrictions slowly start to ease, travel is both more exciting and stressful than ever, and many people are reevaluating how, where, and why they want to travel. Some are prioritizing countries that have handled the public health crisis responsibly; some are looking for a slower, more mindful pace; some are more conscious of sustainable travel; and some just want to get as far off the beaten path as possible.

The Azores deliver on all those points. Portugal as a whole has taken a more cautious approach to the pandemic than most other Western European countries, reopening to tourism much later than their neighbors. The Azores, due to their isolation, have been even more careful, and as a result are considered to have reached herd immunity (always check ahead for travel restrictions, which can change frequently).

It’s also among the most environmentally responsible destinations; due to their isolation, the islands are largely self-sustaining, producing much of their own food and tapping into clean sources of energy through wind, solar, and geothermal production. In addition, the islands have resisted overdevelopment; there are no giant, all-inclusive resorts or even chain hotels, but small, comfortable hotels are plentiful, giving tourists an authentic local experience. In Ponta Delgada, the Grand Hotel Açores Atlântico provides gracious accommodations in the city center, and the newly opened Zenite Boutique Hotel in Angra do Heroísmo features sleek modern rooms that incorporate nods to the Azores’ history, plus a full-service spa and fine-dining restaurant.

The emphasis on locally owned businesses also provides a trove of insider information everywhere you go. Most residents of the islands are natives, and they take great pride in their home, so no matter what hotel, café, or shop you enter, you’re likely to encounter people who are eager to tell you about the local history and offer inside tips on how best to explore.

The Azores are also a surprisingly inexpensive destination. Europe in general is budget-friendly for Americans right now, with a favorable exchange rate ($1.16 to the euro as of this writing) as well as flight and lodging deals aimed at coaxing tourists back across the Atlantic. Portugal has long been among the most affordable countries on the continent, and the islands are no exception. Although slightly pricier than the mainland, because the Azores produce much of what they need locally, visitors don’t experience the sticker shock that accompanies a visit to other island destinations (we’re looking at you, Hawaii and Iceland). 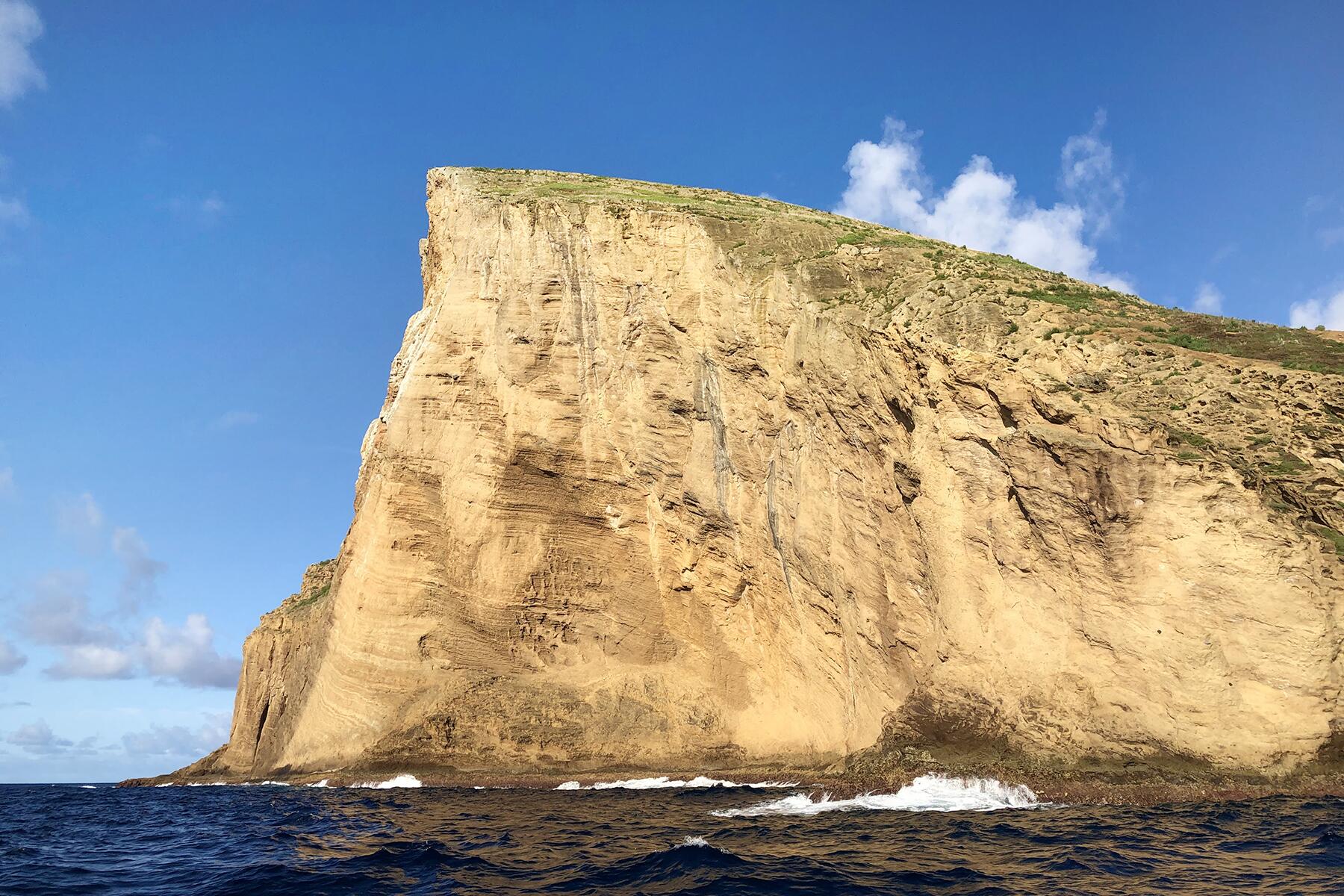 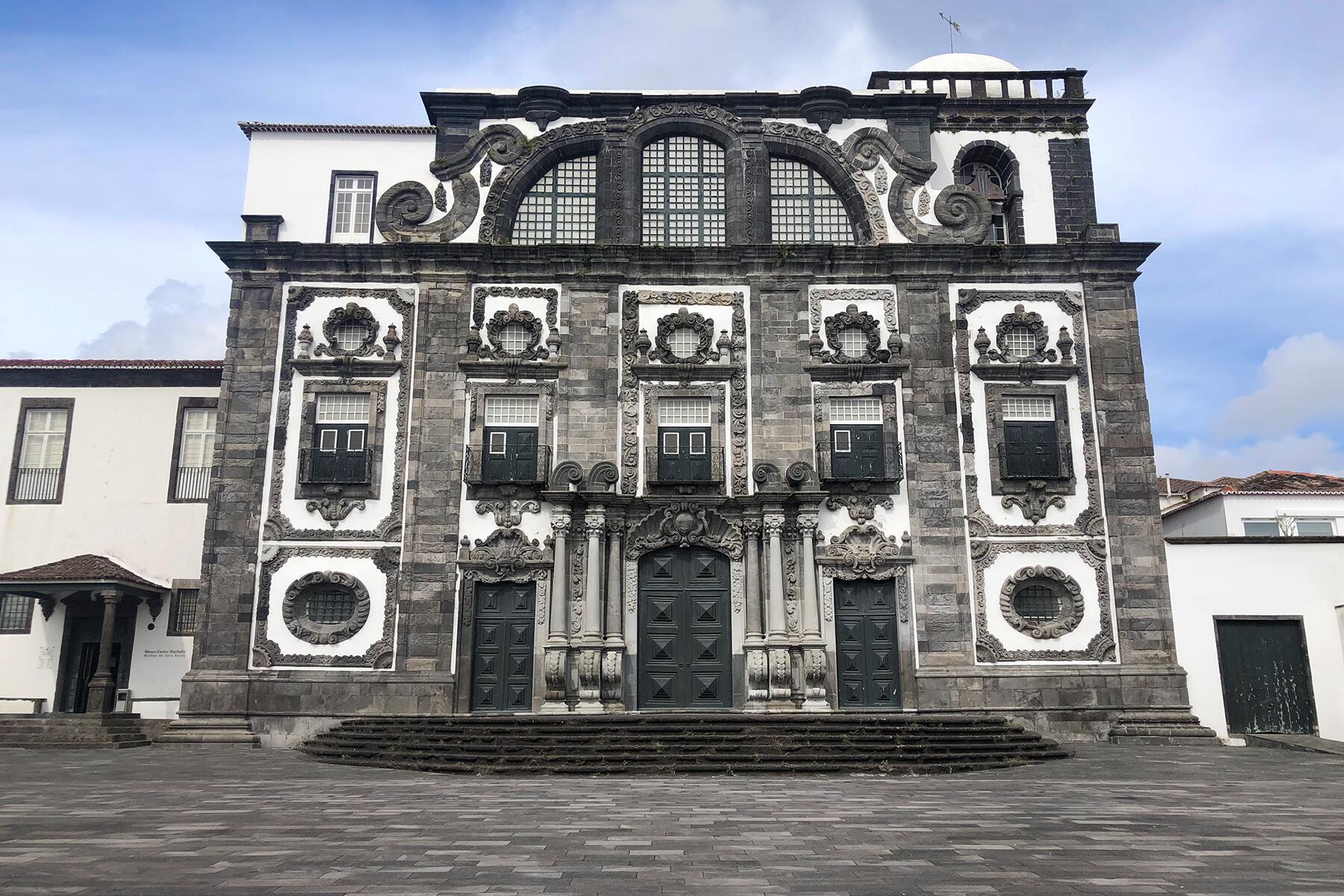 Probably the greatest surprise is how cheap and easy it is to get to the Azores in the first place. Even though the islands tick the box for being (way) off the beaten path—900 miles from mainland Portugal and about 1,500 miles from the United States—direct flights from the east coast only take about 4½ hours to the two largest islands of São Miguel or Terceira, and round-trip fares can be as low as $500, depending on the season. Distance and rough seas make boat travel among the islands impractical, but inter-island airfares run about 60 euros round-trip, and even the smallest island has its own airport, so it’s easy to venture out and experience each island’s distinct culture and geography.

Direct flights to São Miguel and Terceira depart from Boston; most U.S.-origin flights route through Boston as well. Sata Azores is the primary carrier serving the islands, with the best prices and selection of itineraries; TAP Portugal also has routes to the islands, with the option of adding mainland stopovers to your trip. If you’re already in Europe, EasyJet has daily flights to Ponta Delgada from Lisbon and Porto.

Public transportation on the islands is very limited, and private car rentals can be pricey, especially in high season, plus navigating the narrow mountain roads can be dangerous if foul weather or dense fog sets in suddenly. Planning visits around and among the islands can be a little daunting, so engaging a local tour company to help with logistics is a good way to ensure you maximize your time. Zeni Travel, an agency based on both Terceira and São Miguel, is a good place to start; they can arrange accommodations and transportation as well as customized itineraries for individuals or groups.