This architectural style reached new heights in this coastal country.

Gothic architecture spread from France to several other European nations beginning in the 12th century. In Portugal, the style became intermingled with the nation’s own aesthetic movements, giving birth to the unique strand of Gothic reflected in many of the country’s churches and monasteries. We’ve selected the 10 most spectacular Gothic monuments in the country. 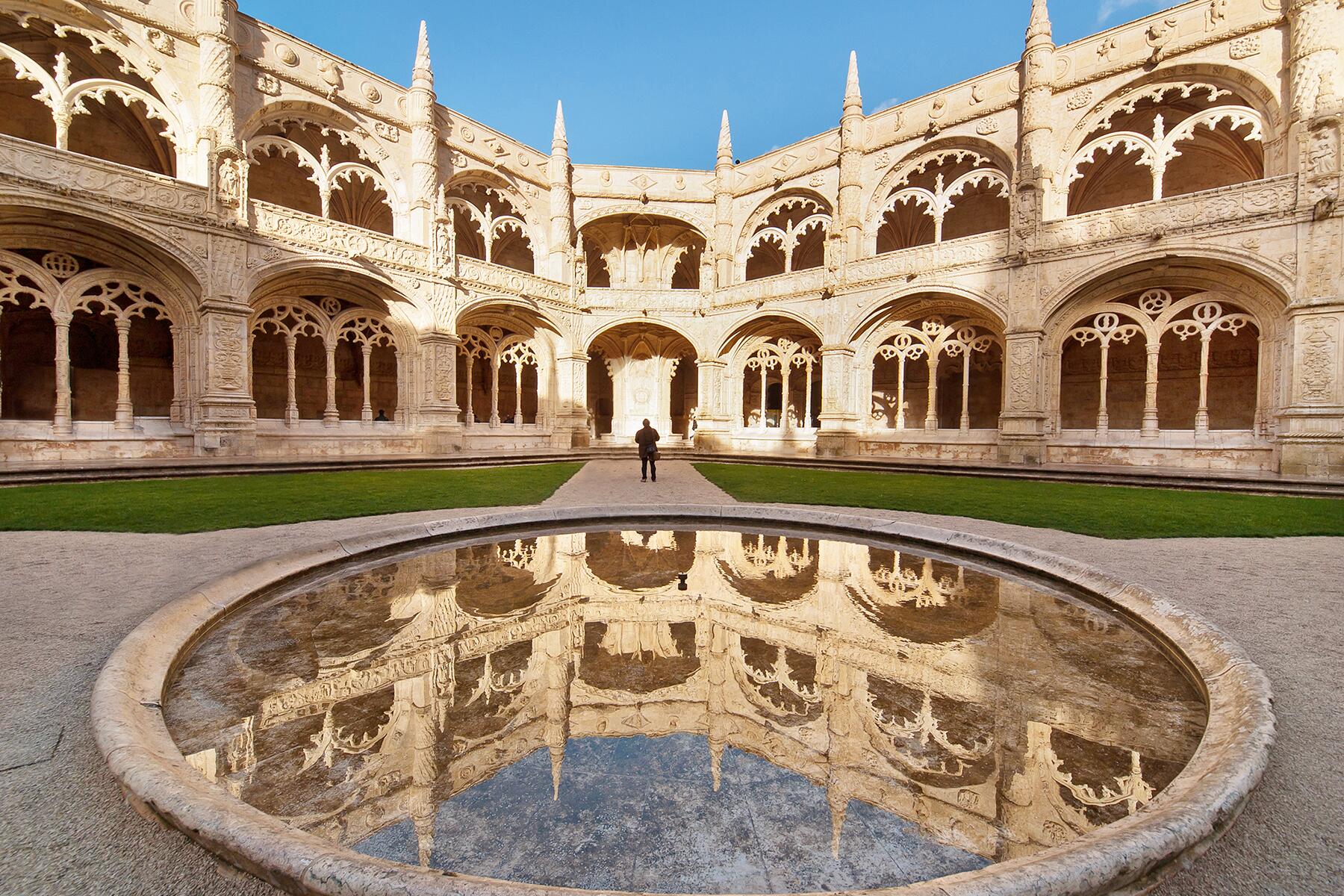 Arguably Lisbon’s most impressive monument, this imposing 16th-century monastery is the resting place of such luminaries as explorer Vasco da Gama and poet Luís de Camões. A UNESCO World Heritage Site, the Mosteiro dos Jerônimos is one of the most prominent examples of Portugal’s Late-Gothic Manueline style of architecture in Lisbon and is a must-see for every visitor to the capital. 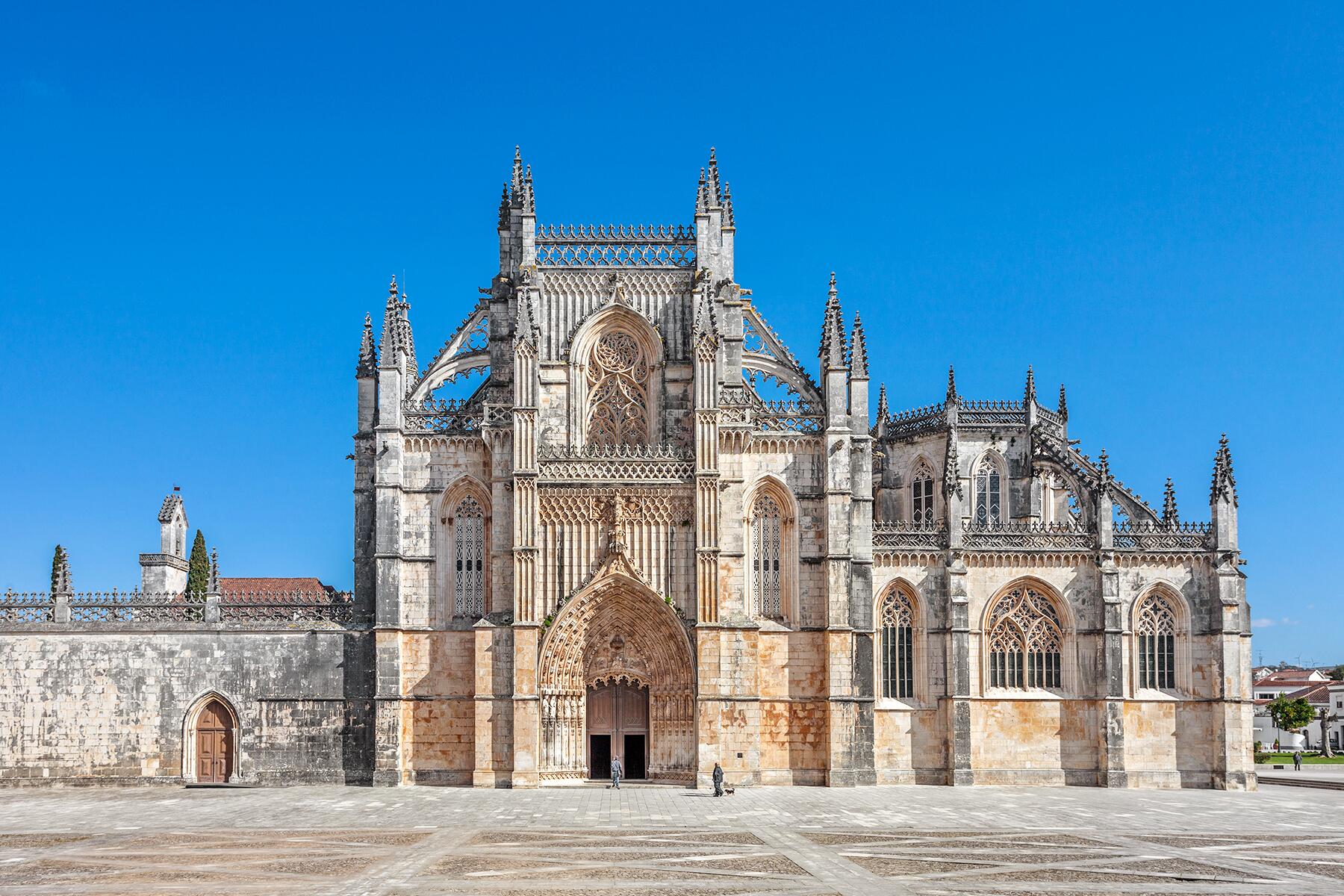 Built to commemorate a decisive Portuguese victory over the Spanish during the Battle of Aljubarrota in 1385, the Mosteiro da Batalha was built over a period of 200 years and is—understandably so—one of the most visited monuments in the country. It is a masterly combination of Gothic and Manueline styles and its magnificent chapels, cloisters, and stained-glass windows have also earned it UNESCO World Heritage Site status. 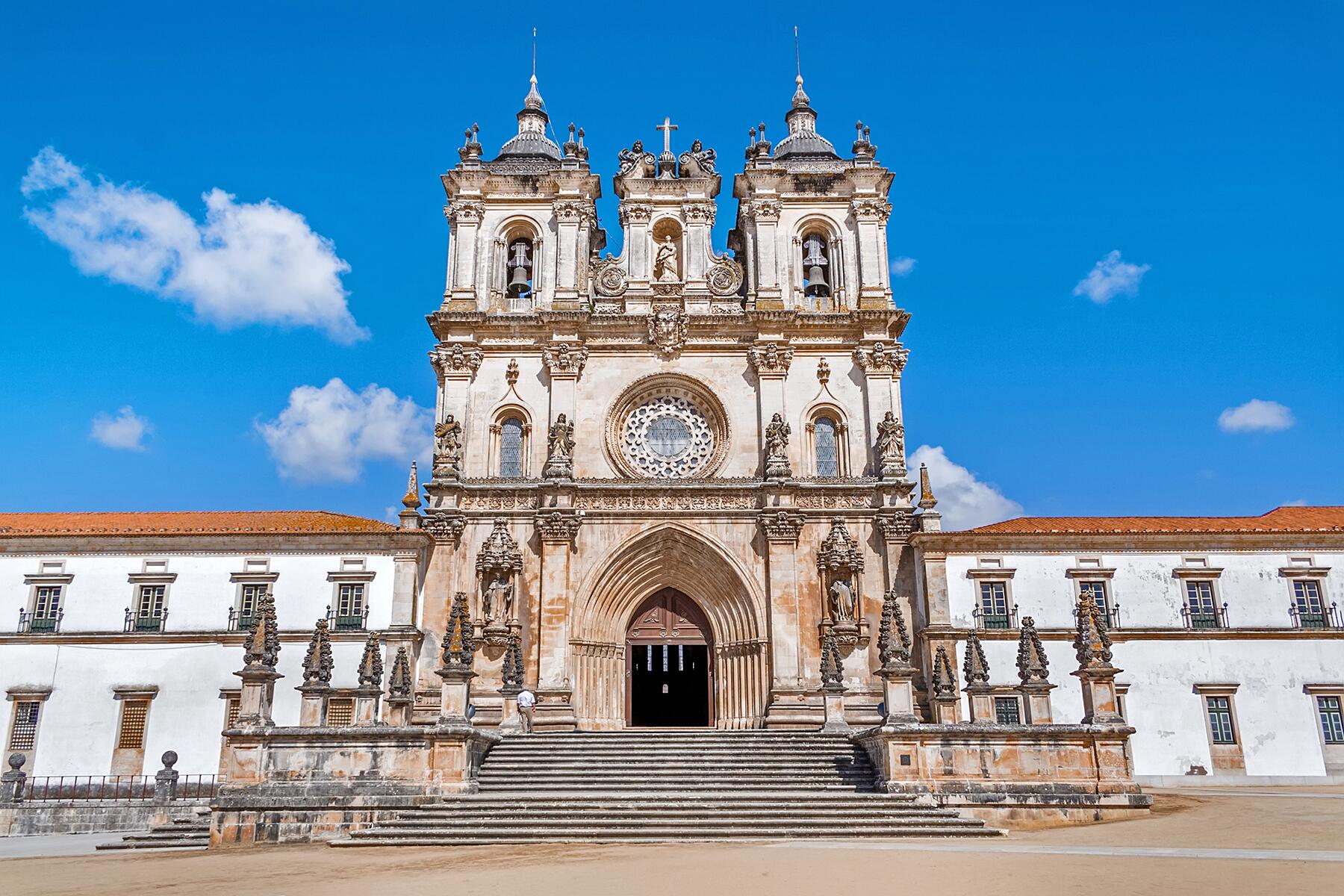 With construction starting in 1153 under the orders of the first Portuguese king, Afonso Henriques, the awe-inspiring Mosteiro de Alcobaça is considered the country’s first example of Gothic architecture. It was built dedicated to St. Bernard and the Cistercian Order following the Portuguese’s conquest of the city of Santarém. 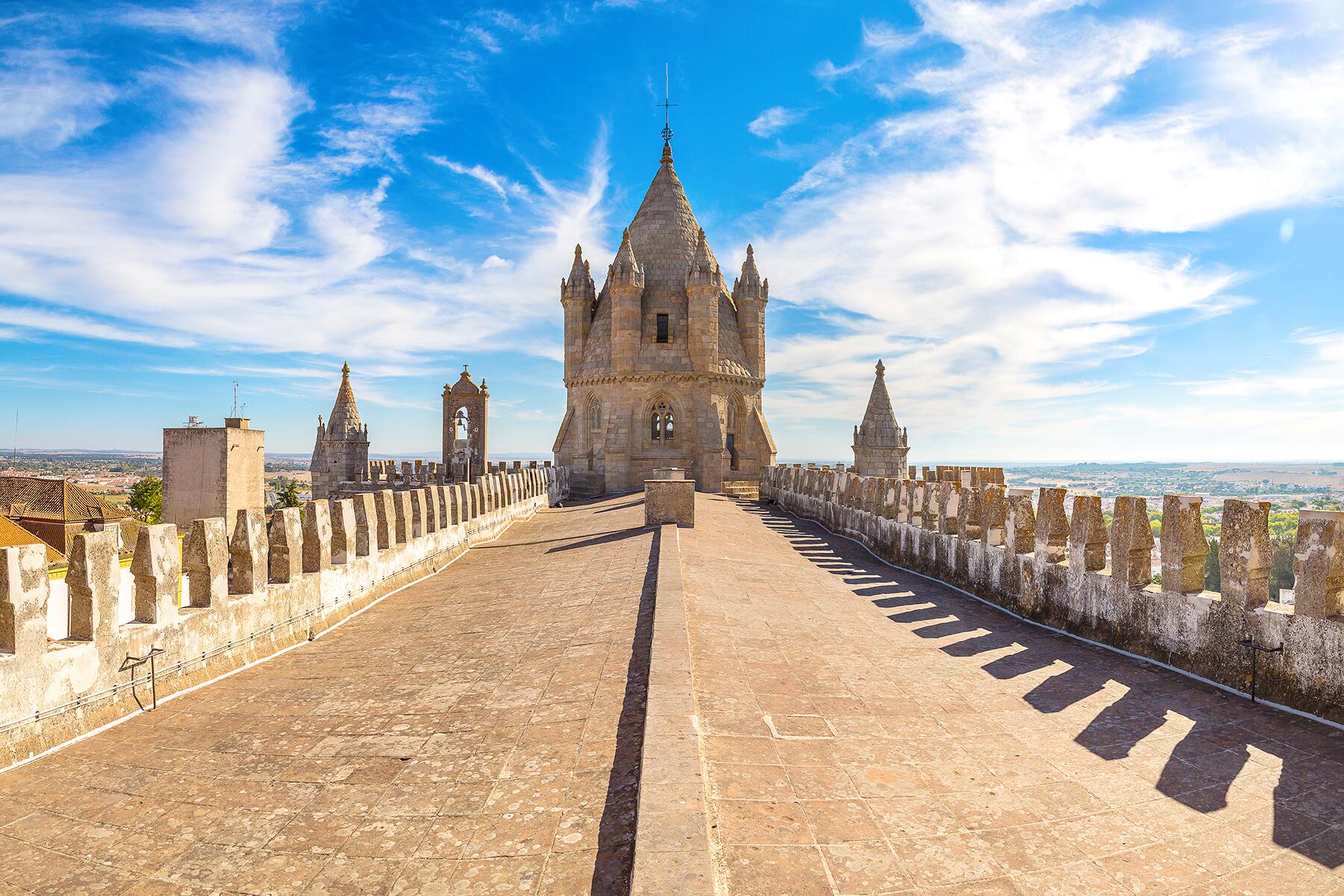 Soon after being reconquered from the Moors in 1166, the city of Évora began construction of this spectacular cathedral. The structure received several valuable additions through time, such as the Gothic cloisters and the Manueline chapel. It is the largest of the medieval cathedrals in Portugal and a UNESCO World Heritage Site. 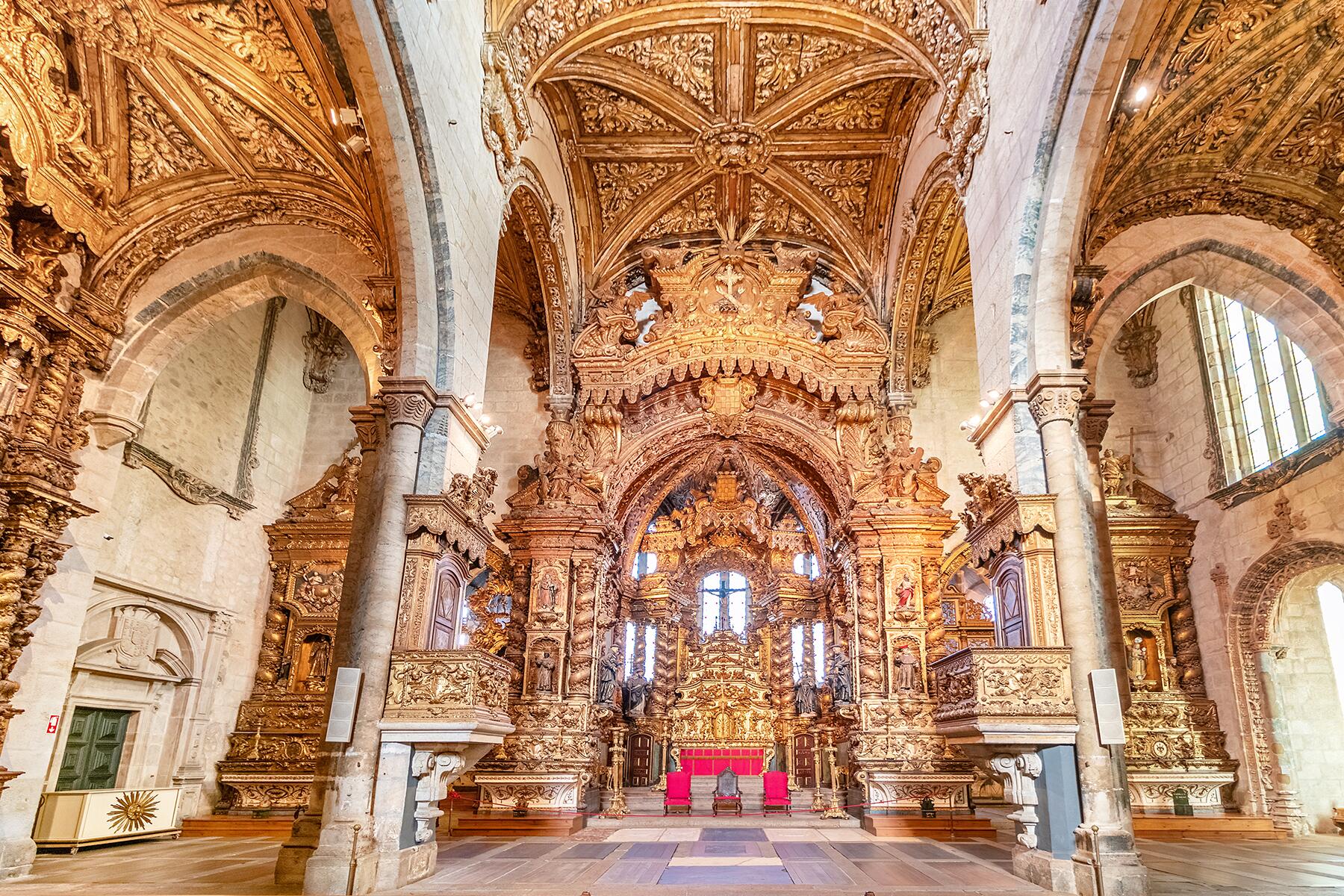 The Church of St. Francis is the most prominent Gothic monument in the port city of Porto. While the exterior is rather undistinguished, the late-14th-century building’s interiors have astounding baroque ornamentations, with gilded carvings filling it floor to ceiling. 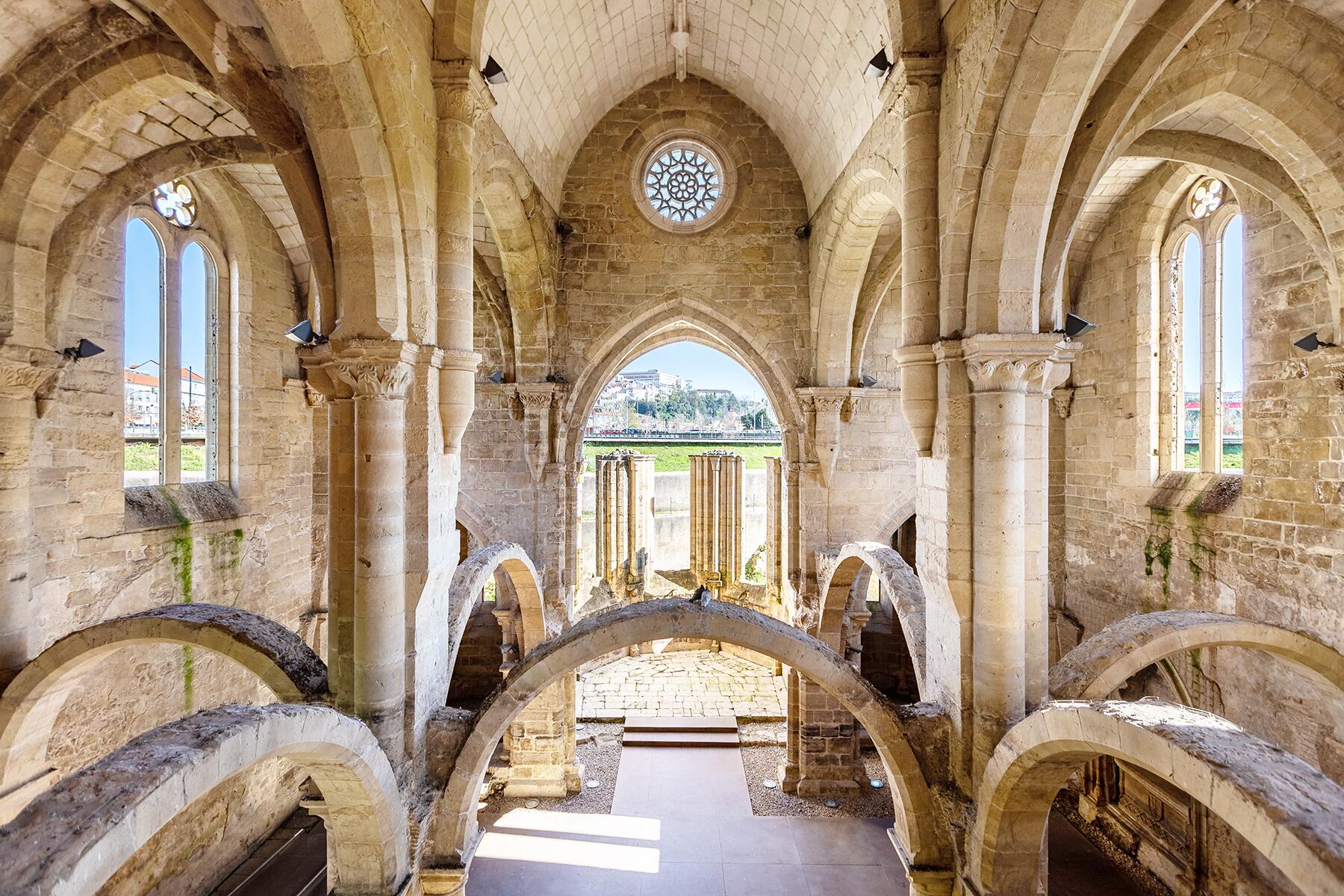 Built in the 14th-century on the bank of the Mondego River, restorers have been excavating the interior of the ruined Convento de Santa Clara-a-Velha for decades. The Gothic building was beset by periodic flooding and was abandoned by its resident nuns 1677. Today, one can visit the restored main building as well as the adjacent open-air ruins and a nearby museum about the site’s history. 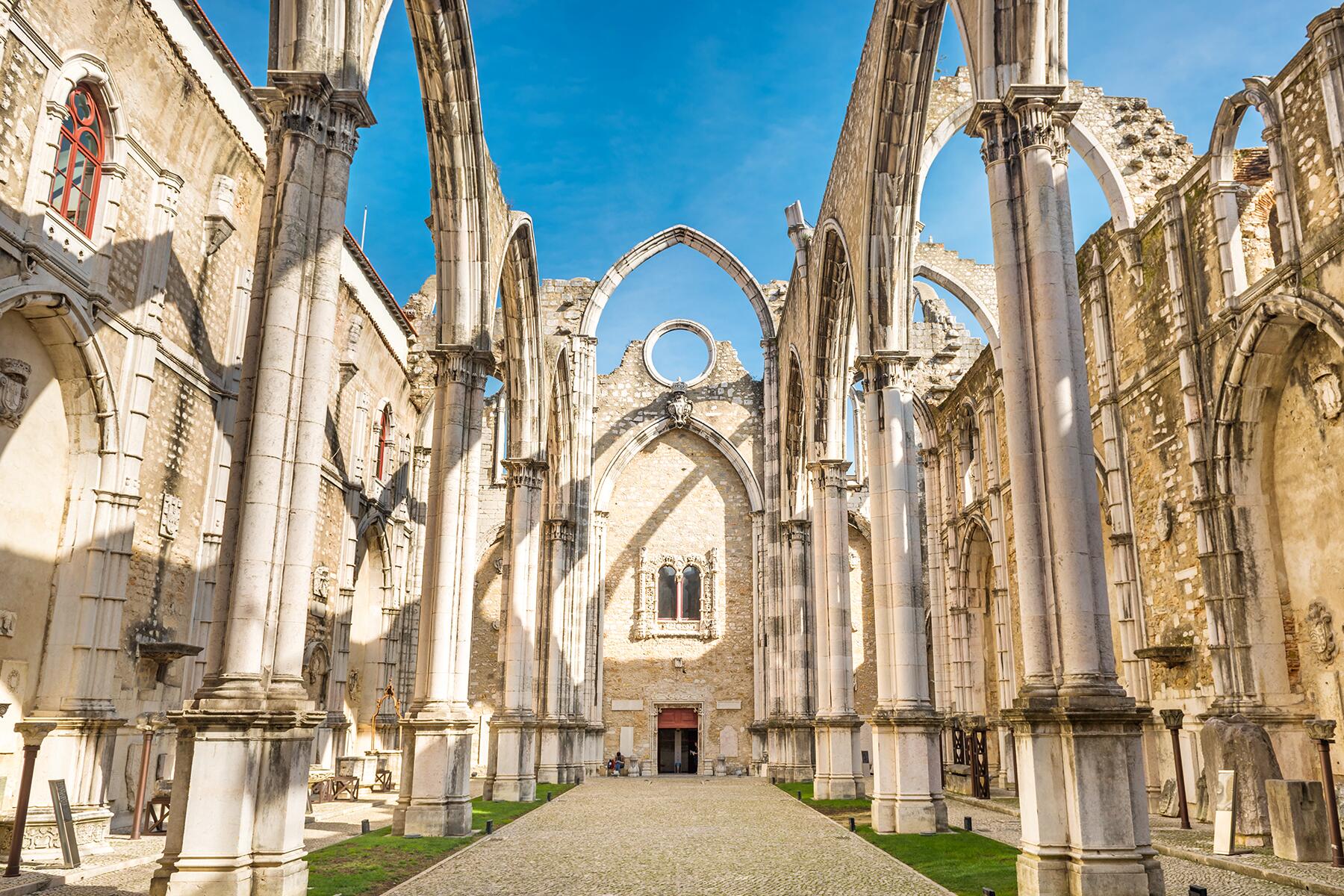 The Carmelite Convent—once Lisbon’s largest— was almost completely destroyed during the 1755 earthquake. The ruins of the Gothic Church of Our Lady of Mount Carmel on the southern facade of the convent is now one of the city’s main reminders of the power of nature. 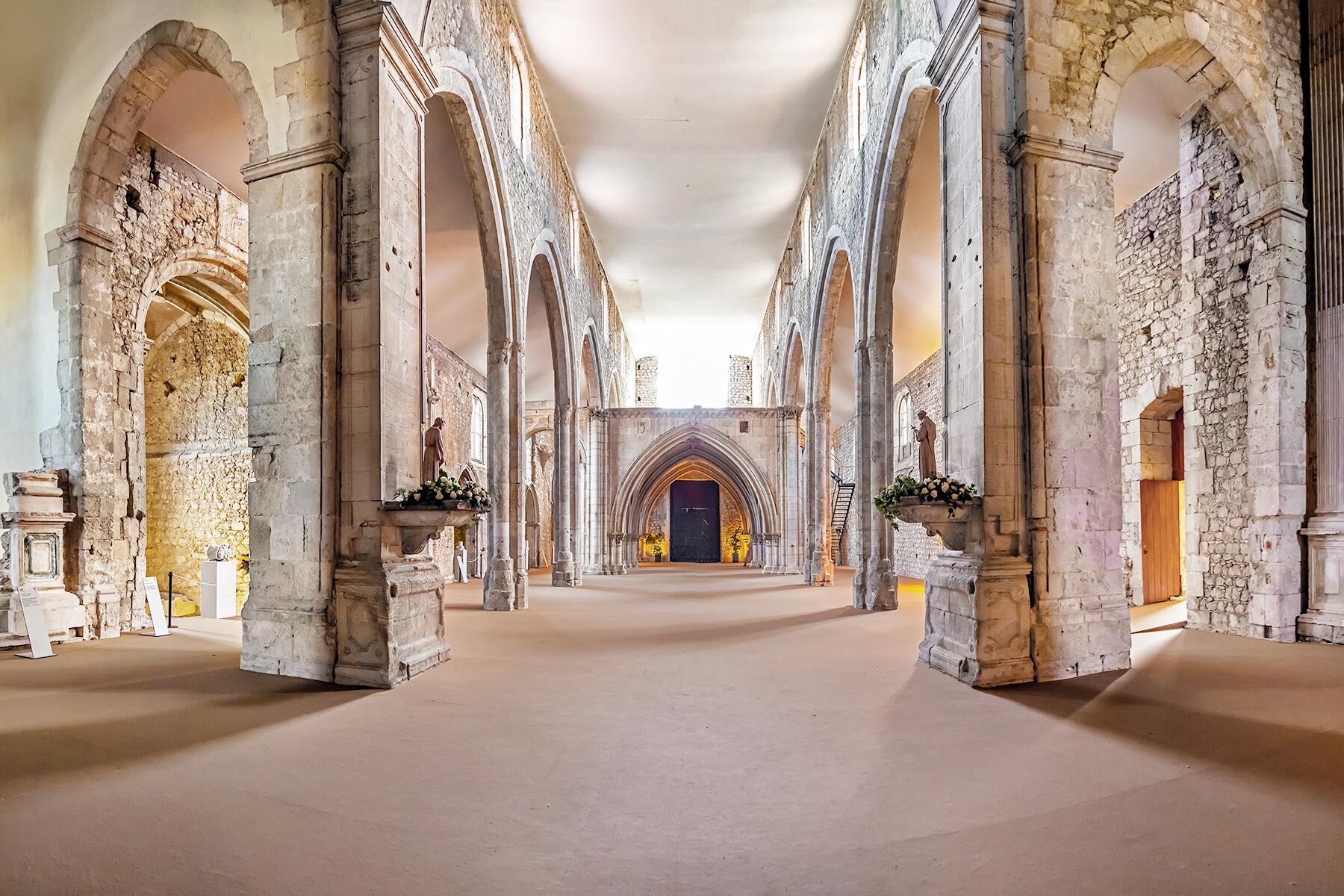 The construction of this convent in Santarém goes back to 1242, when King Sancho II ordered its construction along with the sister convent of Santa Clara. King Fernando added his own flourishes in the 14th century, so styles from Gothic to Baroque are clearly evident in the facade. 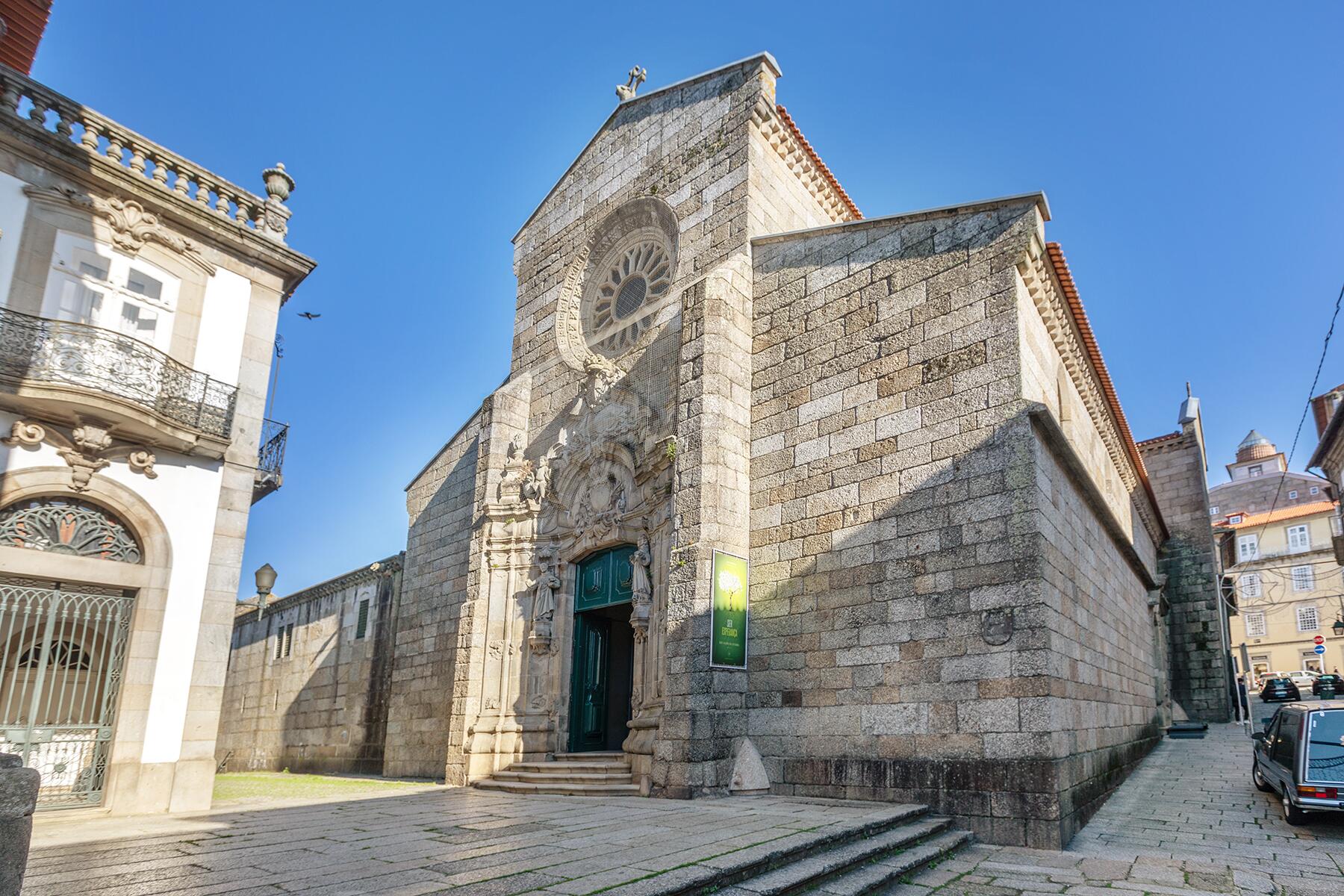 The origins of this church go back to the construction of the first Dominican monastery in the city of Guimarães, built during 1271 and 1278. During the 18th and 19th centuries, the original structure was embellished with elements. 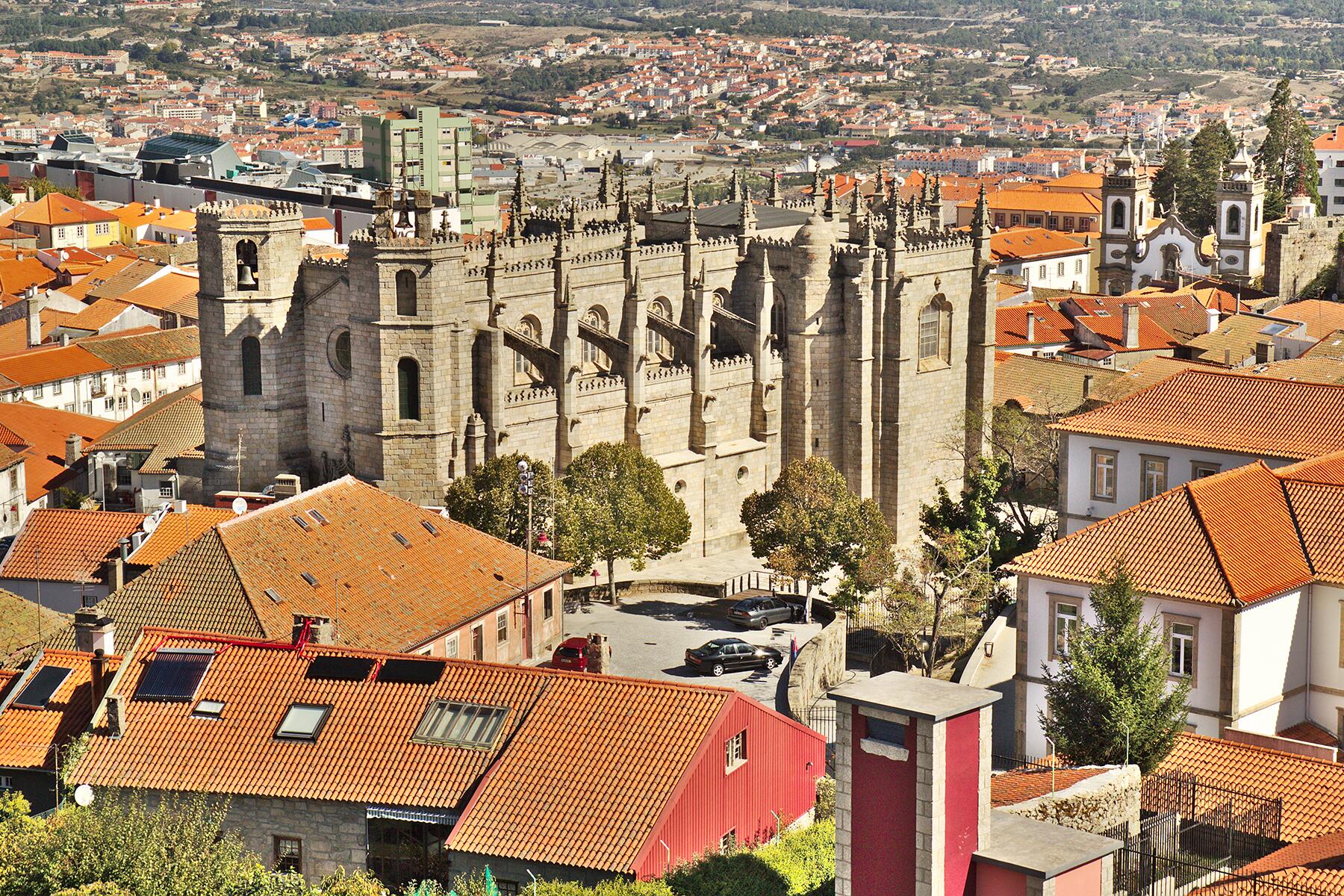 Construction on the fortress-like Sé da Guarda started in 1390 but wasn’t completed until 1540. As a consequence, the imposing Gothic building also shows Renaissance and Manueline influences. Inside, a magnificent four-tier relief contains more than 100 carved figures. The work is attributed to the 16th-century sculptor Jean de Rouen.