From the Colosseum to the Pantheon, there are some parts of Roman history you need to see for yourself.

The ancient Roman Emperor Augustus famously declared, “I found Rome a city of bricks and left it a city of marble.” And though many of the Eternal City’s most incredible ancient sites have been left in ruins, gazing upon them lets you imagine what Rome might have been like when men roamed the streets in togas and gladiators battled to the death. Between the Colosseum, the Roman Forum, and the many bathhouses, markets, and theaters, you could spend a lifetime visiting all of Rome’s ancient sites and archeological ruins. The city is so saturated with them that any time construction workers start digging, they’re bound to discover more relics that have to be preserved. If you’ve got a limited amount of time to explore, these 10 ancient sites are a good place to start. 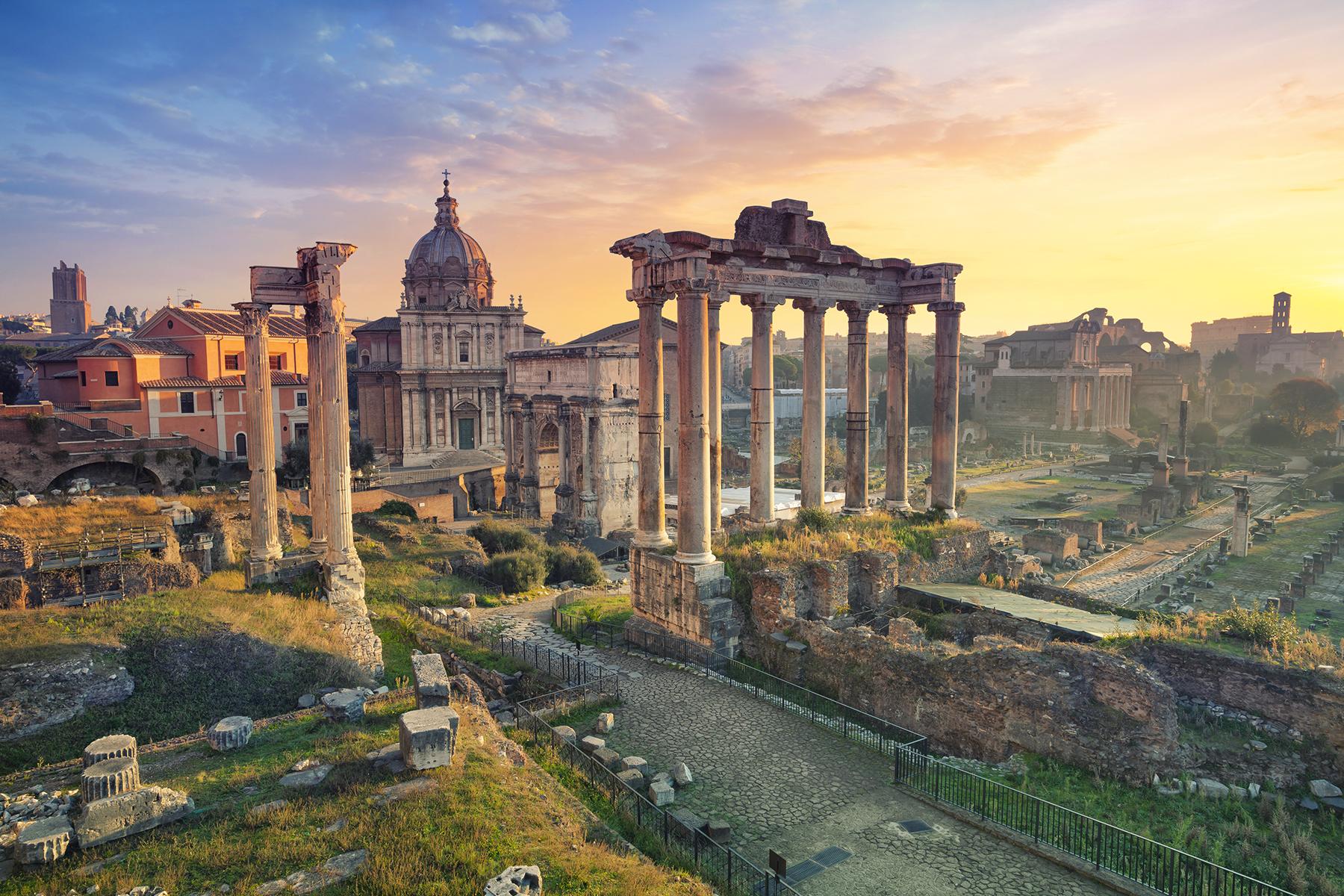 One of the Eternal City’s most emblematic sites, the Roman Forum stretches out between the Capitoline and Palatine Hills. This vast area filled with crumbling columns, the ruins of temples, palaces, and shops was once the hub of the ancient world and the center of political, commercial, and religious life in the city. The various ruins span almost 900 years, from around 500 BC to AD 400. There are no signs marking what they were once used for, so it’s worth going on a guided tour if you want to distinguish the complex of the Vestal Virgins from the Temple of Saturn. 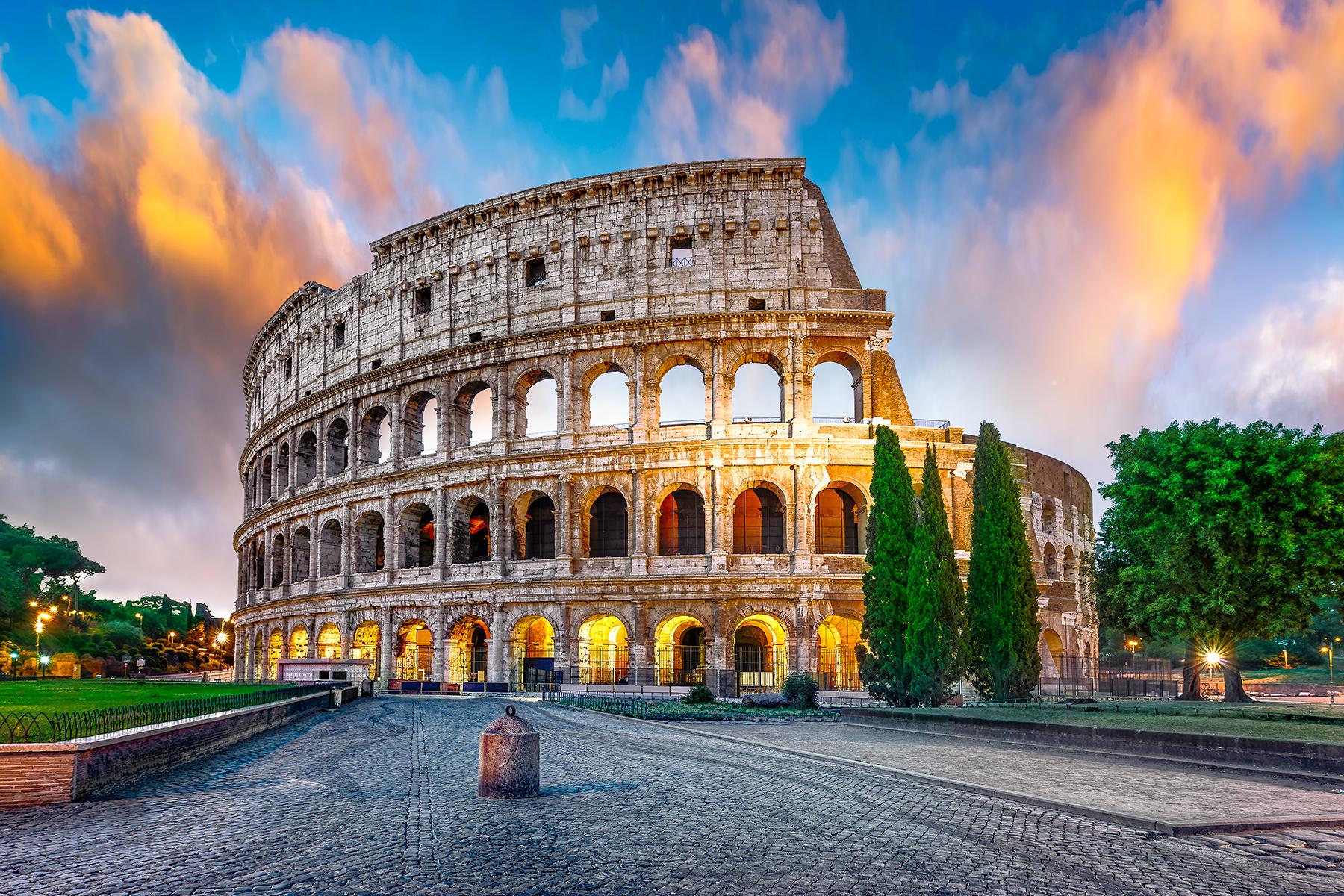 Perhaps the monument most symbolic of ancient Rome, the Colosseum is one of the city’s most fascinating—and popular—tourist attractions. The Emperor Vespasian commissioned it around AD 70–72 and his son Titus officially opened it in AD 80 with 100 days of games, including wild animal fights and gladiatorial combat. It was the largest amphitheater in the Roman world, with seating for 50,000 people, until it was abandoned and later used as a quarry for projects like the Basilica di San Pietro and San Giovanni in Laterano. It underwent a restoration in 2016 courtesy of Tod’s CEO Diego della Valle. 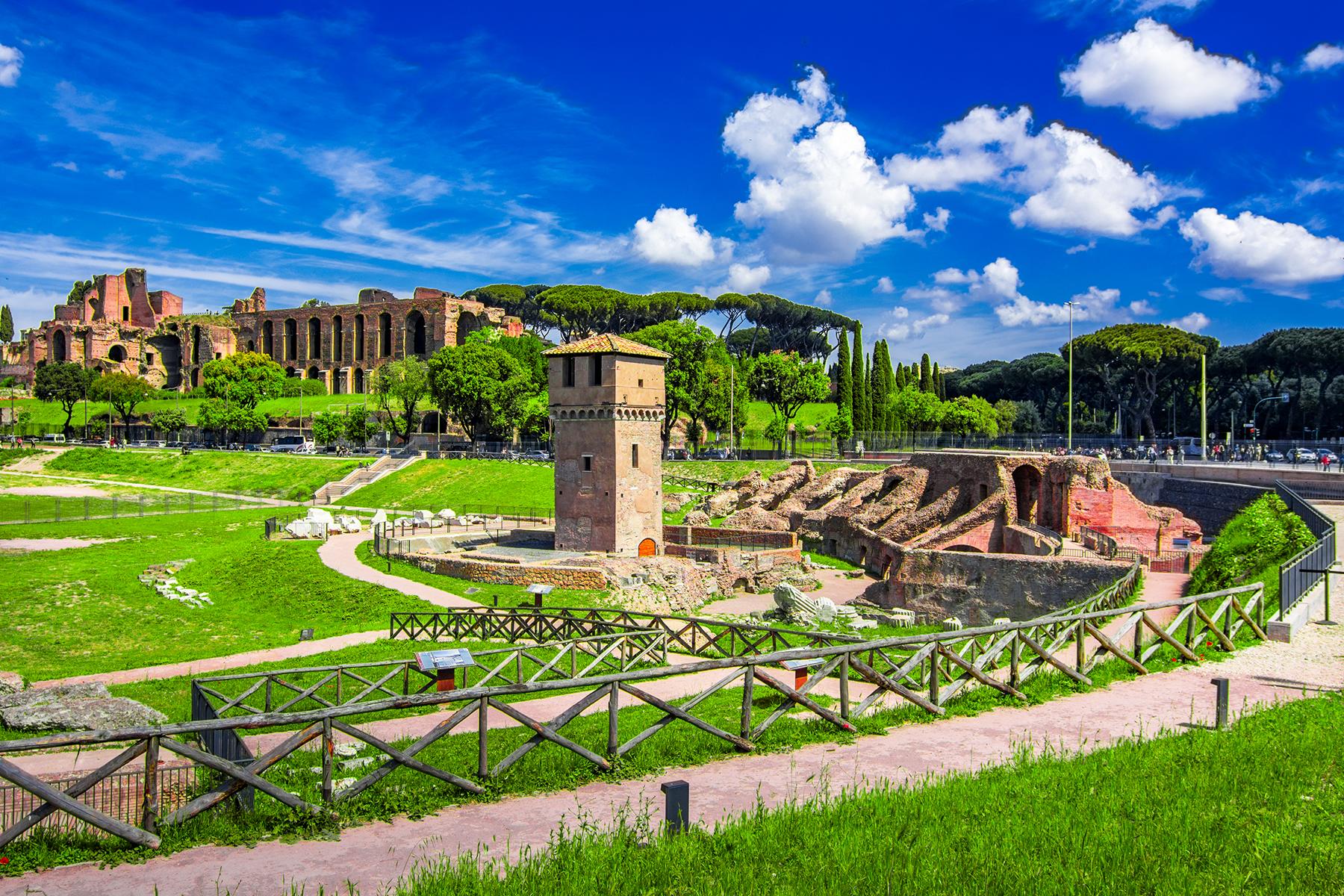 It might be hard to imagine now, but the grassy area between the Palatine and Aventine Hills was once the site of the largest hippodrome in the Roman Empire. The huge oval course was rebuilt under Julius Caesar and later enlarged by subsequent emperors. During its heyday, it hosted epic chariot races and competitions that sometimes lasted as long as 15 days. 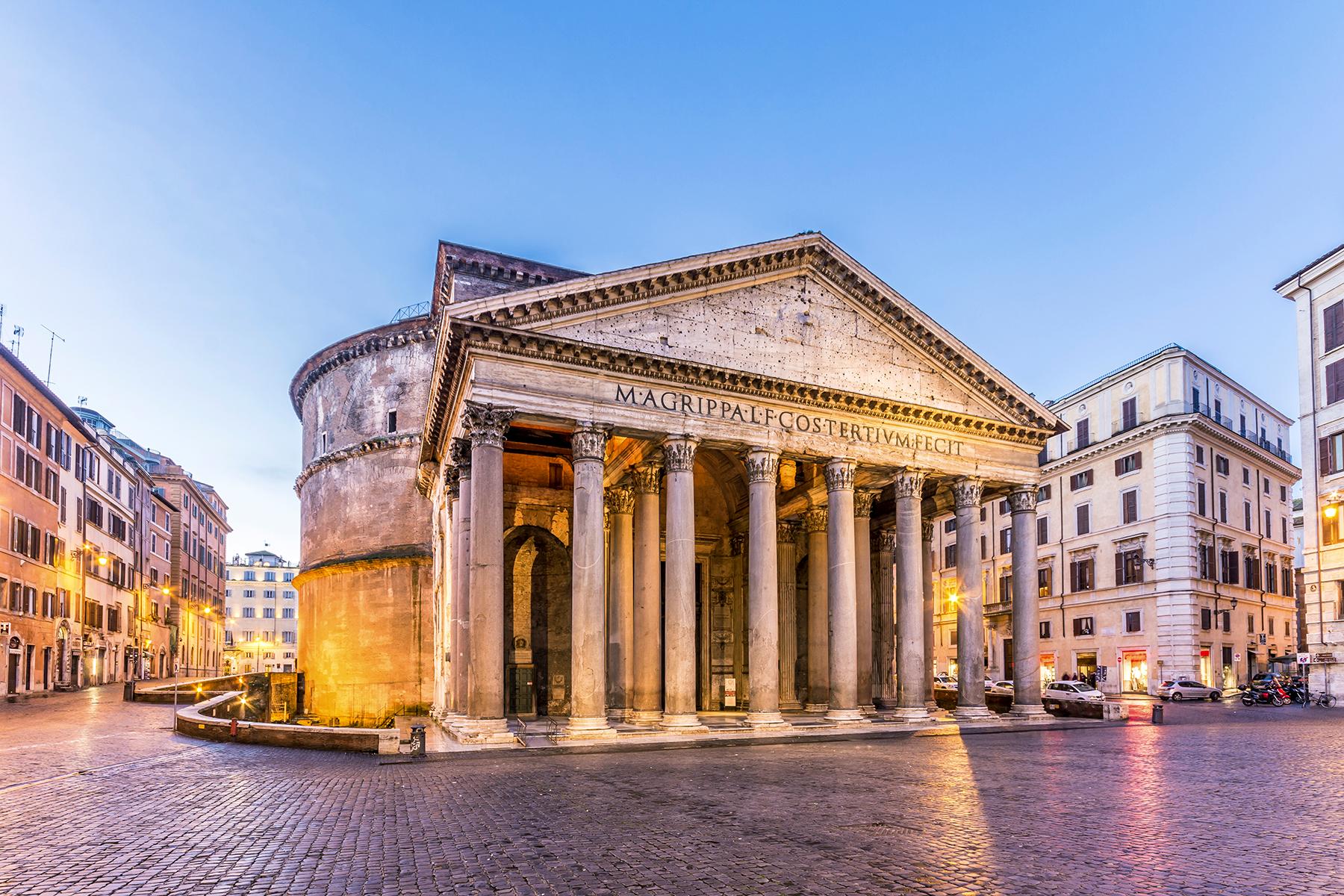 Built as a pagan temple to the gods, the Pantheon is Rome’s best-preserved ancient site, perhaps because it was later consecrated as a church. It was originally constructed by Augustus’s son-in-law Agrippa in 27 BC and was later rebuilt by the emperor Hadrian around AD 120. Step inside and you’ll be amazed at its perfect proportions and the sunlight streaming in from the 30-foot-wide oculus. It’s truly a wonder of ancient engineering. 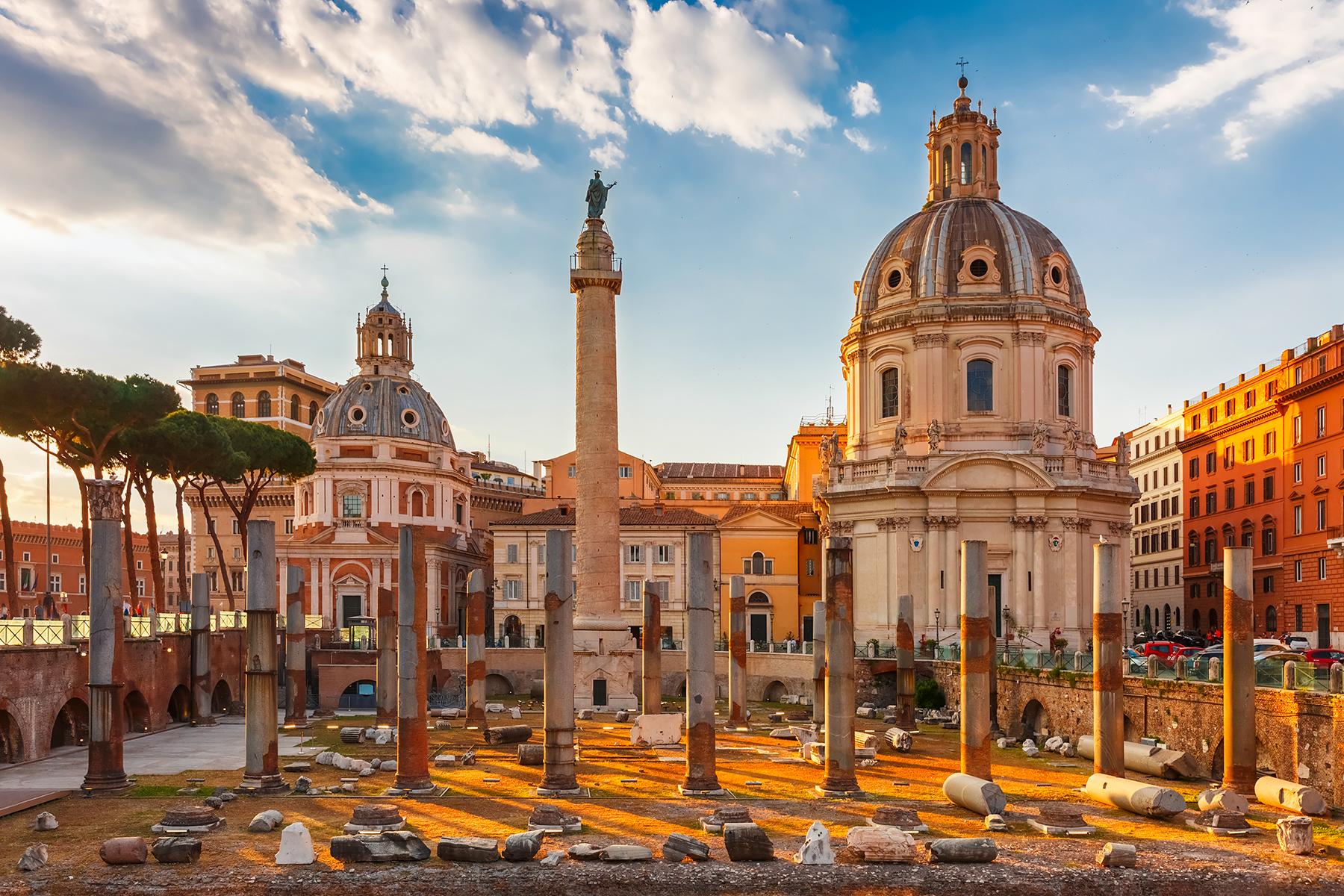 Located on the road that leads from Piazza Venezia to the Colosseum, Trajan’s Forum was the last of Imperial Rome’s forums—and the grandest. Comprising a basilica, two libraries, and a colonnade surrounding a piazza, it’s connected to a market that once bustled with commercial activity in the shops, taverns, and administrative offices tasked with feeding the citizens. It’s now home to the Museo dei Fori Imperiali, which displays archeological relics and has a video presentation showing what the forum was like in its heyday. 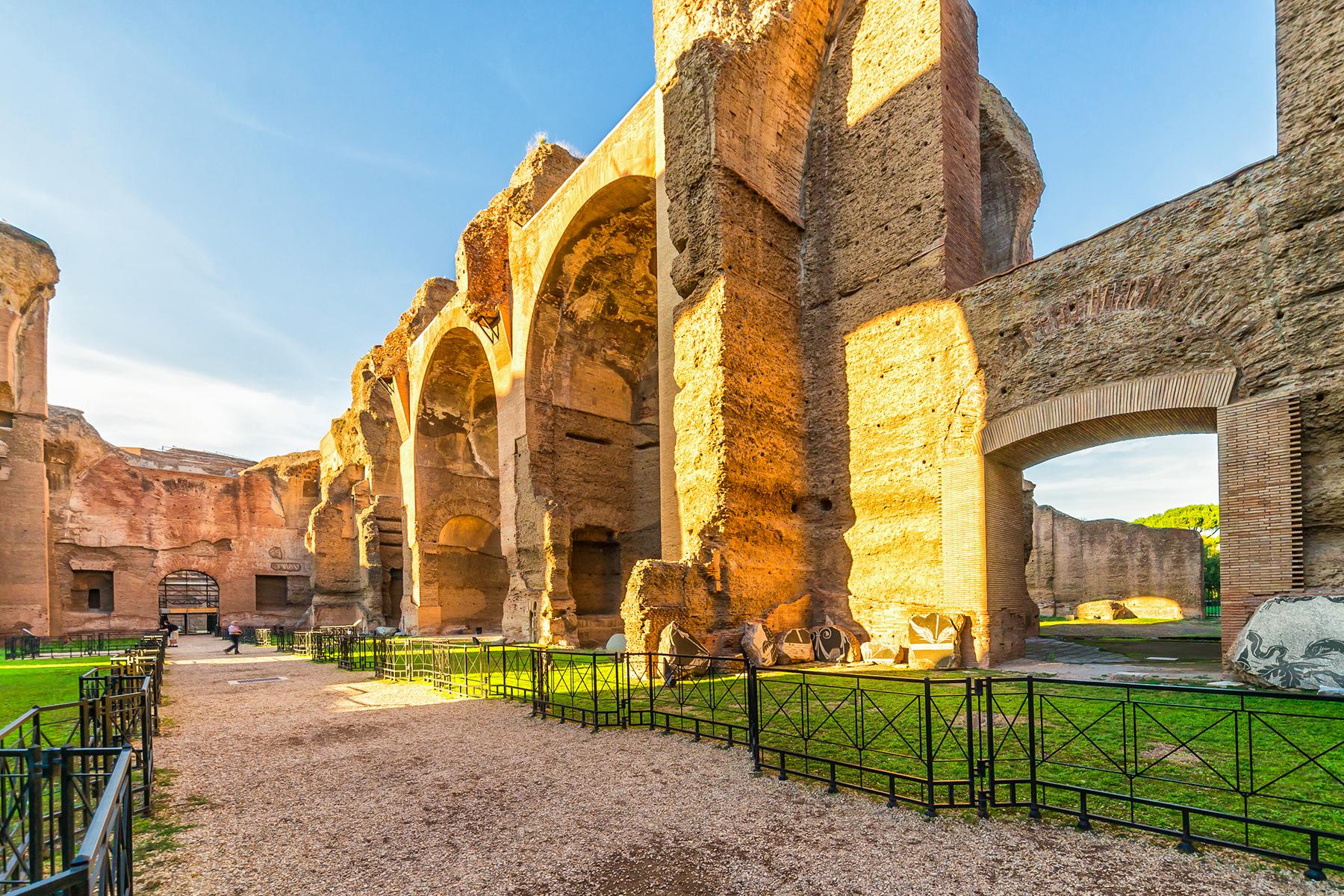 Though visitors to Rome often skip over the Terme di Caracalla, film buffs will recognize the site from the nightclub scene in La Dolce Vita and from the scene with the disappearing giraffe in La Grande Bellezza. Cinematic significance aside, the site is a testament to ancient Rome’s bathing culture. It was essentially a massive spa, with saunas, baths, an Olympic-size pool, and two gymnasiums for boxing, weightlifting, and wrestling. Little of its splendor remains today, but it was once richly decorated with marble, frescoes, mosaics, and sculptures. 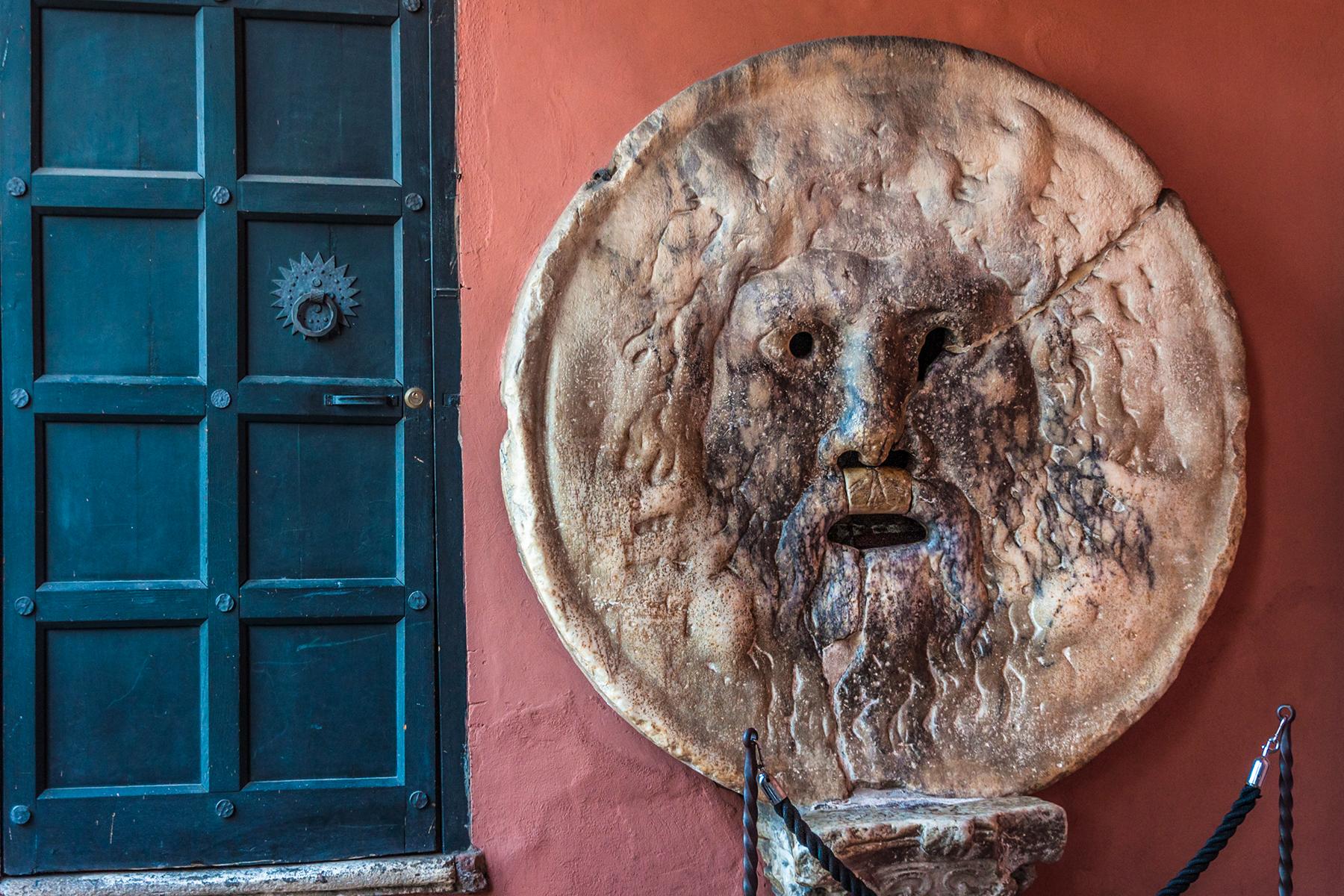 Legend has it the mouth in this ancient stone face will bite off the hand of a liar, and tourists line up to stick their hand inside the mouth and put it to the test. (Gregory Peck’s character tricks Audrey Hepburn’s Princess Ann into thinking he lost a hand inside it in a scene from Roman Holiday.) You’ll find the enigmatic face in the portico of the Church of Santa Maria in Cosmedin, near the Circus Maximus. 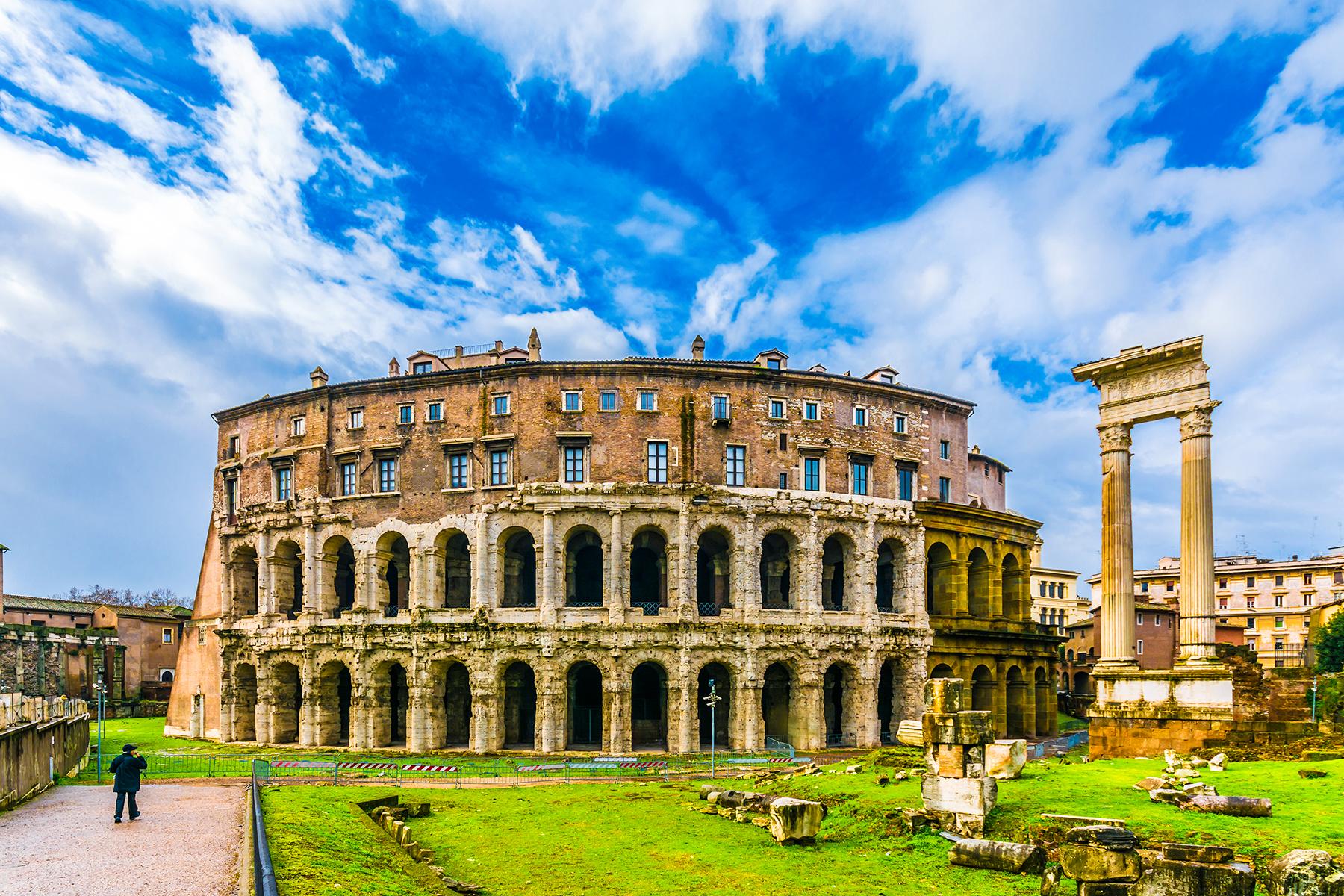 It may look a bit like a smaller version of the Colosseum, but the Teatro Marcello was once ancient Rome’s largest and most important theater. Julius Caesar ordered the land for the theater to be cleared, but he was murdered before it was built. It was inaugurated in AD 12 by Augustus and hosted performances of drama and song. It’s kept that purpose even today, at least during the summer when it hosts concerts. 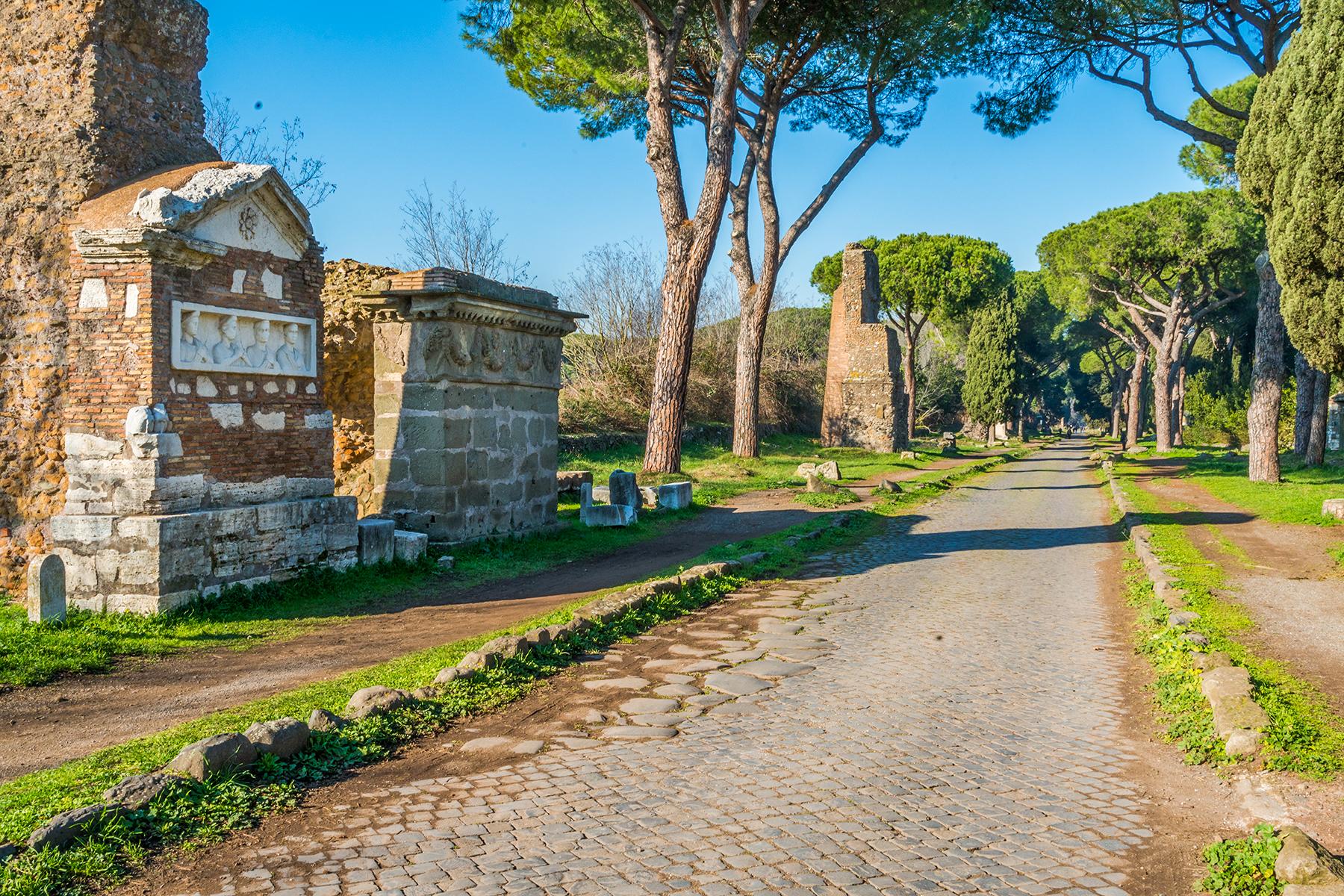 Head to the southeastern edge of the city to the Appia Antica Park and you can walk on the same stones that ancient Roman soldiers and citizens once trod. This ancient thoroughfare once stretched all the way to Brindisi, some 300 miles away on the Adriatic Coast. Today it’s a perfect spot for bike rides and picnics in the grass under the shadow of Rome’s emblematic umbrella pines. 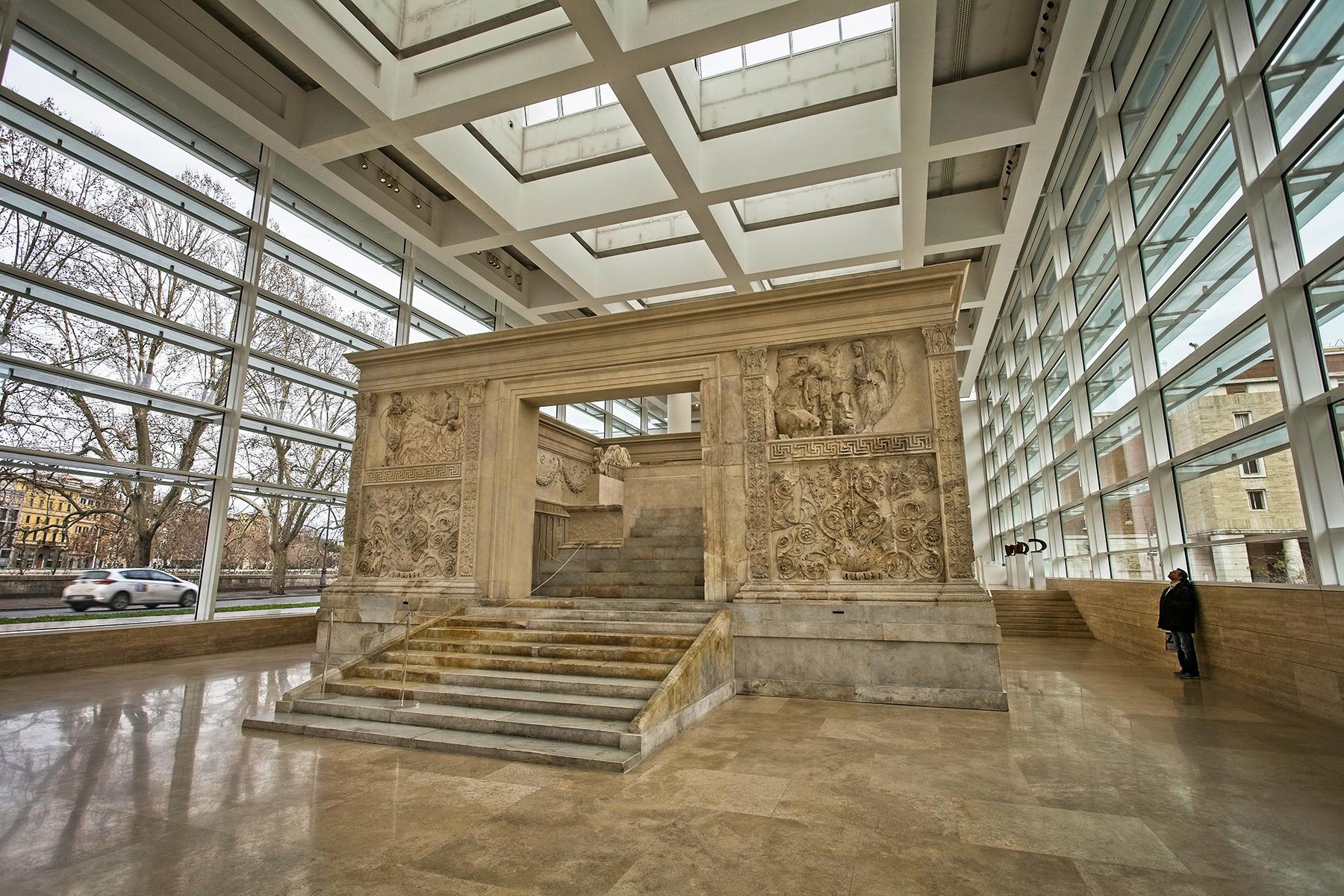 Now housed in a modern glass-and-travertine building designed by American architect Richard Meier, the Ara Pacis Augustae has some of the most incredible reliefs you’ll see on any ancient monument. It was commissioned to celebrate the Emperor Augustus’s victories in battle and the Pax Romana, a peaceful period that followed. You’ll have to imagine how richly painted the scenes once were, but you can still admire the carvings depicting ancient Rome’s creation myths on the sides of the altar.