This pasta’s origin story has been hotly contested for centuries.

They’re yummy, sexy, cruel. Italy’s iconic tortellini have a kinky past and a fierce present that tastes of territorial rivalries and gourmand battles. Hailing from the northern Emilia Romagna region, dubbed Italy’s “food valley” for its top delicacies, it’s impossible to determine where exactly they were first made or who invented them.

Yet four locations claim to be the birthplace of this iconic dish of handmade fresh egg pasta shaped like tiny knots that are stuffed with pork loin, ham, Mortadella salami, Parmigiano Reggiano cheese, eggs, and nutmeg and then thrown inside a thick capon broth to cook. The broth is their “death,” meaning in Italian it’s the best way to savor them even though tortellini in other Italian regions can also be eaten with plain tomato sauce, sage and butter, and beef ragù sauce. But not in Emilia Romagna, where any creative twist to the broth recipe is deemed a heresy, a no-no.

Tortellini are dubbed “Venus’ belly button.” According to legend the cook who came up with the knot-like shape was inspired by the perfect, sexy abs of the goddess of beauty and desire. But where was the inventor based? The “origin war” is fueling the historic, ancient rivalry between the cities of Bologna, Modena, and Reggio, and a small unknown town called Castelfranco Emilia.

No matter you happen to be in this region of Italy, everyone claims to make the best tortellini. Local chefs in Bologna say their ancestors invented them, as do those in Modena and in the other towns. Add to this confusing picture the fact that each housewife and grandmother has her personal recipe which she hands down across generations, and you end up with infinite interpretations of a traditional dish.

The origin legend that tears apart the four towns harkens back to before the Renaissance.

It’s said that a half-blind voyeuristic innkeeper-chef peeped through a keyhole to spy on a steamy threesome between the sensual goddess of love (Venus), the fiery god of war (Mars), and the tipsy god of wine (Bacchus). He caught only a glimpse of the goddess’ perfect navel and tried to reproduce it in pasta form, creating tortellino. The cook’s epiphany happened at an inn-tavern during a cold eve in the middle of a fierce battle over boundaries contested by the cities now fighting for the tortellini invention. Another version of the story sees the innkeeper-cook just spying on a beautiful naked woman and her lover and got inspired by their love-making. The lady may have been a famous duchess or the mischievous red-headed princess Lucrezia Borgia, daughter and alleged lover of her own brother and father, cruel Pope Alexander VI (picture The Borgias TV series). Beautiful and damned, men were bewitched by her. Lucrezia had a knack for collecting lovers and then poisoning them.

“Italians have a proverb: between numerous contenders, the outsider usually wins. And in fact, across time…the real birthplace of tortellini [has been pinpointed to] a small town…Castelfranco Emilia, where such tavern was allegedly located,” says top chef Anna Maria Pellegrino, a member of Italy’s prestigious Cuisine Academy. 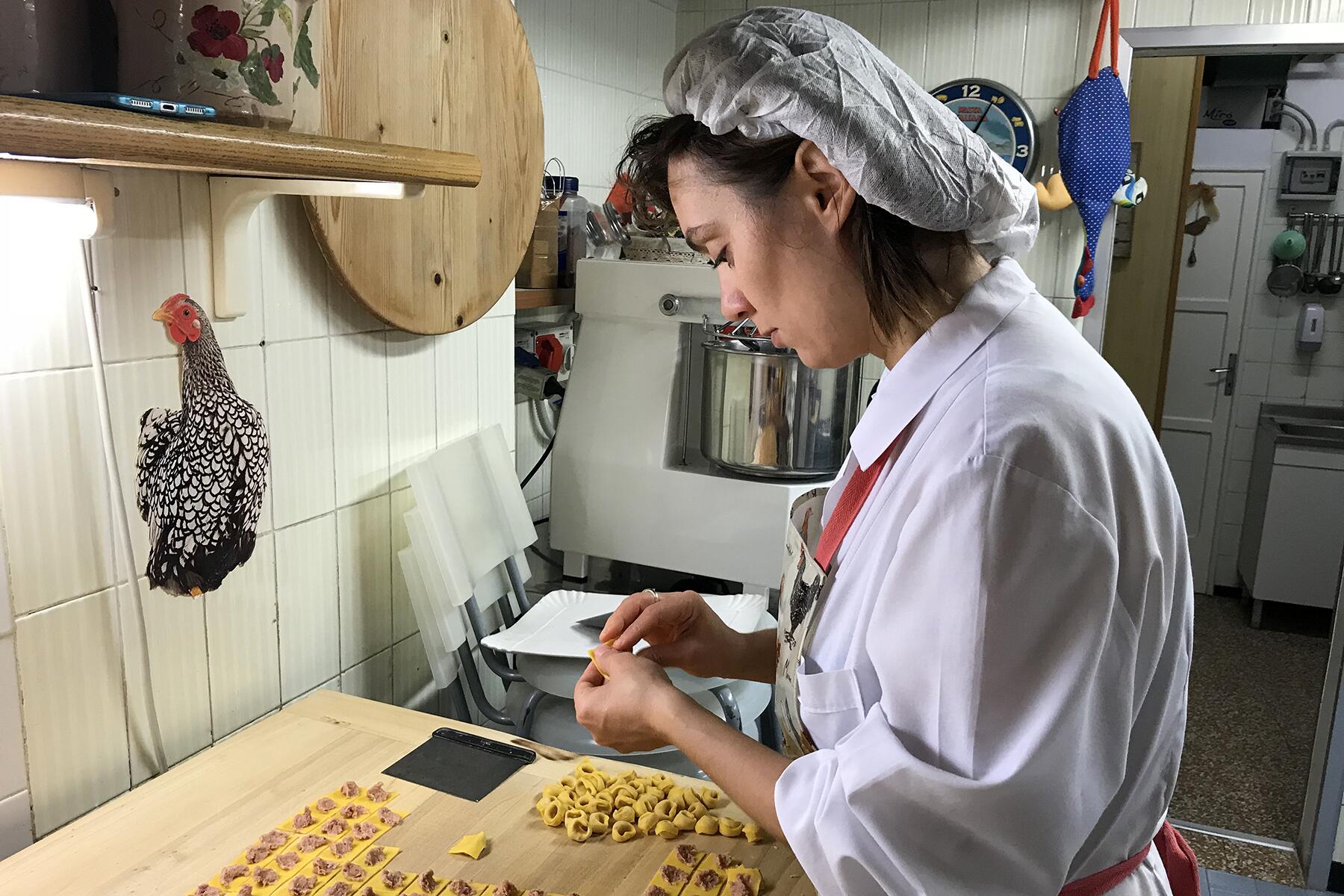 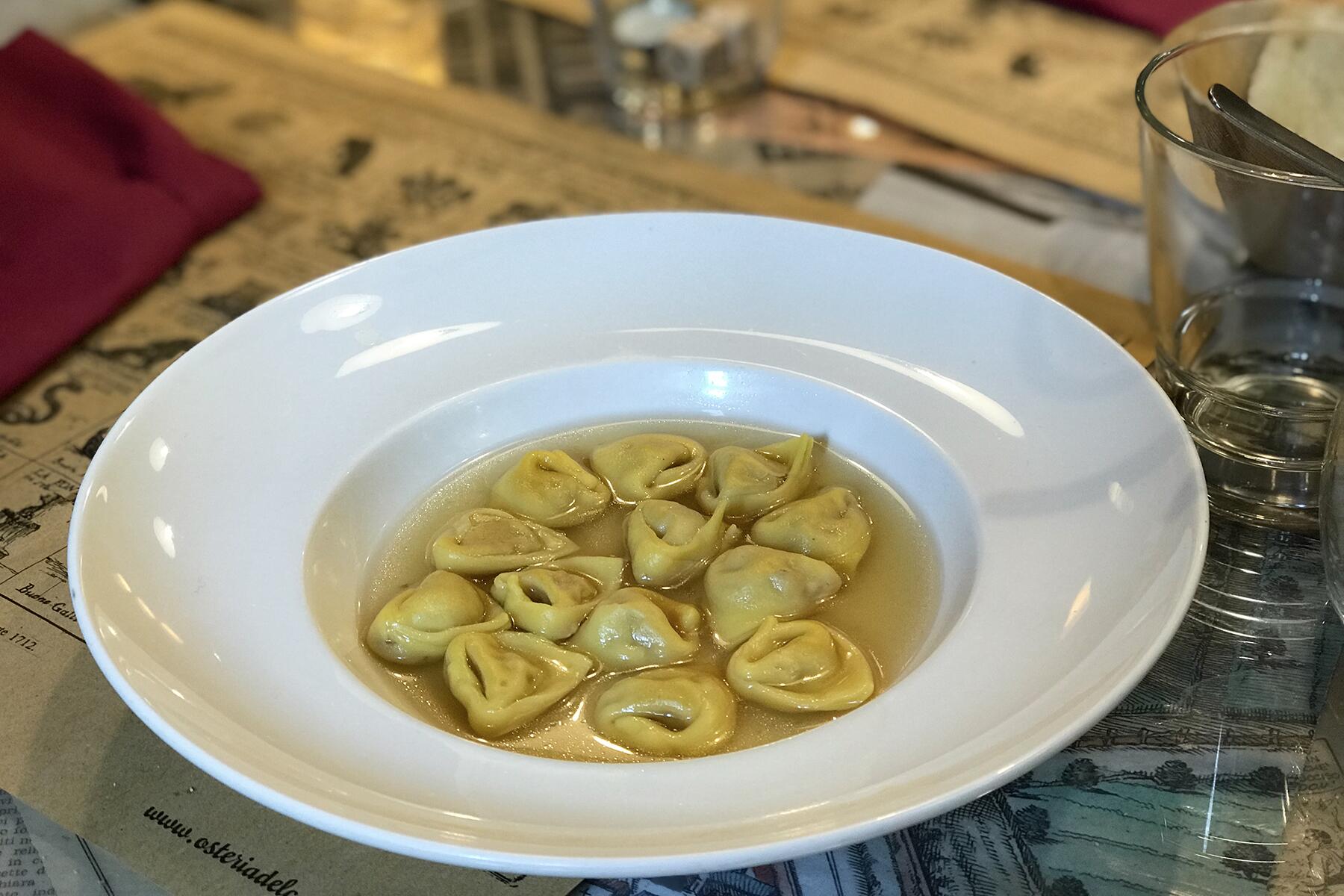 The tavern is no longer around but the battle really occurred and was dubbed the “War of the Bucket.” Bologna had stolen a precious, albeit ruined, wooden bucket kept as a treasure at Modena’s cathedral, so Modena declared war against Bologna. As in Ancient Greek times, locals believed that gods and goddesses took sides and fought in the battle, so that’s how Venus, Bacchus, and Mars ended up reveling together at the inn.

Tortellini are thus a “sex pasta” born in times of bloody war. They’re the proof that food is a deadly serious matter in Italy. Cuisine is culture and identity, and culinary clashes are just a reflection of bitter territorial spats. Italians have a term for such petty feuds: campanilismo, meaning there are as many rivalries as there are “church bells” (campanili) that dot the boot (of which Italy, the cradle of Christianity, has an infinite number).

The tortellini war is also a matter of pride. Locals in Modena, Reggio, and Bologna feel different from their neighbors and have been “enemies” for centuries despite living just a few kilometers apart. The Emilia Romagna region used to be split in two—Emilia and Romagna—and still, nowadays, people refer to themselves as either romagnoli or emiliani. Ever since before the middle ages when Italy didn’t yet exist and was divided into numerous bickering independent communes, neighbors were at war over land, power, and dominance.

A semblance of “national unity” is relatively recent: Italy’s state was proclaimed at the end of the 1800s but the feeling of national belonging never kicked-in. Many locals in Emilia Romagna just don’t feel part of one unique family and this can be seen in the many varieties of stuffed pasta they have invented, ranging from tortellini to hat-shaped cappelletti, tortelli, tortelloni, anolini, and cappellacci—each distinguished by just tiny differences in the shape and filings. Each village has its own variant of stuffed pasta.

As opposed to the popular Bologna, globally-renowned and a major tourist magnet, and the other cities of the region, Castelfranco Emilia is a small town, offbeat and quiet, under-the-radar. A place where nobody would ever think of stopping by if it weren’t for the appeal of the foodie mystery. Locals are proud of their tortellini ancestry and each year a festival is staged to celebrate “Venus’ belly button” during which a cook or amateur chef is named “the guardian” of the tradition and the “symbolic heir” of the first creator. Actors dressed in costumes re-enact the epic culinary event. Bronze statues of the voyeuristic chef-innkeeper, naked Venus, and a giant tortellino welcome visitors entering the town.

Myth aside, stuffed pasta made by monks has been around since the Middle Ages as a key Christmas treat and a creative way to finish off the remains of meals. Only at a later stage did it become an aristocratic, elaborate recipe to serve at banquets. The name tortellino means “miniature stuffed pie” in Italian and in Bologna the local recipe is protected by the Confraternity of Tortellino, a group of die-hard purists who won’t tolerate creative twists and will look at you sideways if you dare throw your tortellini inside a pot of tomato sauce. They even state the precise quantity of ingredients to use, so if you happen to add too much nutmeg, well that’s simply not a tortellino.

Each family and tavern in Emilia Romagna has its own signature style. Across the region, there are fresh pasta boutiques where you can snatch your daily dose of tortellini prepared by the descendants of the so-called Azdore, the “pasta priestesses” who have been making these delicacies for centuries and prepare each day fresh stuffed pasta of all sorts. They curl the tortellini around their little finger and then pinch it close as if tying a miniature knot. Watching them work is like looking at a painter in front of his canvas. Their creations are sold at pasta boutiques aka “pastifici”—similar to pizza stands or baker’s shops.

According to chef Emilio Barbieri of AnnA restaurant in Modena, tortellini must have come from his town, given it boasts the old tradition of a communal stewed meat dish called carrello dei bolliti with different parts of different animals.

“Tortellini was the perfect way to recycle meat leftovers such as capon, beef, pig trotter, pork sausage cotechino mixing them with Parmigiano cheese. In time the filling was refined by adding ham and fat-loaded mortadella salami.”

Another reason why Modena’s claim is powerful is because it also makes the so-called “Venus’ Casket”—a golden-colored elegant pasta pie stuffed with tortellini and Parmiggiano cheese cream. Barbieri says Reggio’s claim is weak given their tortellini are actually called cappelletti and shaped like little hats while Bologna’s tortellini are slightly larger than those in Modena and the filling is cooked before being stuffed inside the pasta (in Modena the raw filling is cooked with the pasta). Modena’s variety has rougher, zig-zag edges. To support their claim, the Bolognese swear the innkeeper was from Bologna even if he might have migrated across the region for work. These may appear as small nuances to the tortellini saga but for locals, they’re important identity traits. Isn’t that what food is all about?