A baker uses fermentation to conserve his community.

The soft tang of sourdough carbonates on my tongue as buttery wafts of walnut bread softens its fizz. It’s 6 a.m. in Kostas’ office.

“I can’t smell the bakery,” he tells me.

I assume he’s shopping for laughs, but the Greek baker’s face is straight as he separates bodies of dough. This bakery is his home in every sense. It’s where he loses himself in hours of kneading, with no tugs of wanting to be somewhere else, but it’s also the ground floor to his family’s flat. Upstairs, licks of hot crusts and caramelized biscuit tops fall on numb noses. Outside, this bakery’s incense stretches far beyond Zitsa village.

“The Bakery of The Village” sits in the heart of Zitsa, an intimate community in the Epirus region of Greece. For the lucky hikers and bikers who have heard of or happened upon it, its cobbled streets climb to terracotta-flecked mountains. Zitsa is home to the Debina grape which produces the region’s sparkling white wine which, as my Airbnb host happens to be the local taverna owner, has been difficult to leave the flat without hearing about.

The morning I join Kostas in his room of ovens, he kindly medicates me with a croissant doused in fig jam. I truthfully say it’s the best pastry I’ve ever tasted, but he looks put out. I’ve managed to emphatically compliment the one thing Kostas buys frozen. But as we lose ourselves in the trance of preparing daily bread, I come to understand why there’s no time for making pastry. 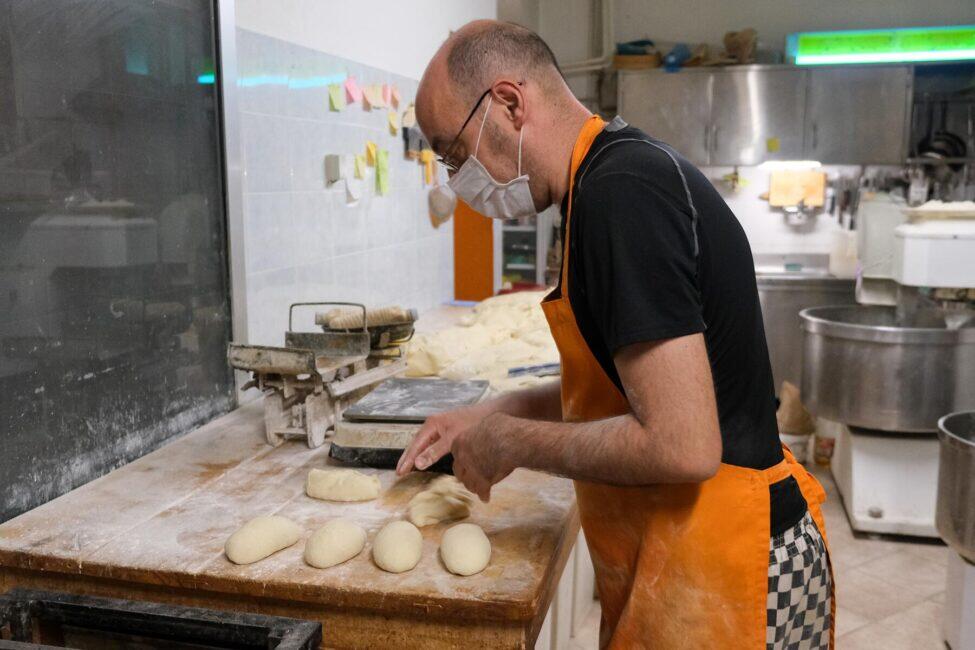 Kostas calls baking his meditation but tells me previous spectators have called it a ballet. Watching him and his assistant, Nikos, I bow to the accuracy of this observation. Weight rarely goes through the men’s heels; instead, their toes tilt them toward their various workstations for moments at a time. They work dough which folds like spilled velvet, until it kicks back, alive and nettled. Kostas weighs lumps into loaves before shaping them and lovingly placing them on trays. Just before the end of the bake, he sifts flour through his signature stencil, which marks the bread with powdered flowers. Such chemistry before sunrise undeniably requires the swift, sustained movement of dancers.

By 8 a.m., a vineyard owner arrives to collect rolls ready for wine tastings. We also frailly nod to our hosts, who pick up loaves for the taverna without a whisper of a hangover. Despite his constant flow of customers, “selling bread” doesn’t justify Kostas’ work. He feeds this community. During harvest, he and his mother prepare evening meals for the farmers, only charging them the cost of electricity for the ovens. “We have empathy for the people who work the land here. We see their struggles,” Kostas explains. “If I look after them, they’ll keep buying bread from me.”

With its community spirit, steaming bread, and purple figs, Zitsa feels like a utopian time warp. A clandestine village of the good old days. But every utopia has its reality and, for Zitsa, it’s a severely-aging population. A few days earlier, on an impromptu walking tour, Kostas had shown us the roofs with slipping slates. For every home trilling the sound of life stands a crumbling building, empty of anyone. The young are leaving Zitsa, and the old are dying. 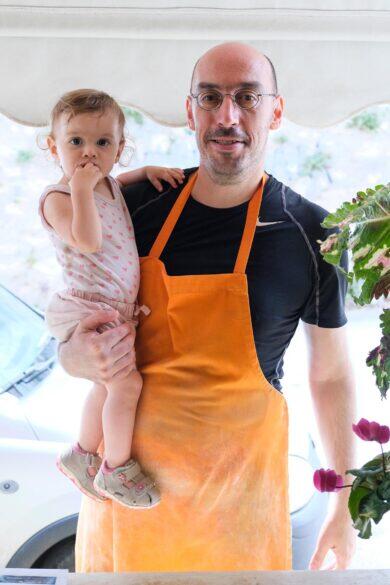 “Last year nearly 20 people died, and these people aren’t being replaced,” Kostas tells me as he checks the spring of his sourdough. He reminds me of something the waitress in the taverna had said, about commuting to Zitsa to help her parents out on the weekend. “Holidaying here is wonderful, but living here as a young person is much different.”

Kostas wants to change this disconnect between Zitsa and the young. He wants to make Zitsa a place his young daughters want to stay. His eldest, at five-and-a-half, shares her school class with just four other children. More young blood is needed, but Kostas is clear he wants to revive, and not change, his village.

There’s no denying his hope is romantic, but his ideas are pragmatic. “The villagers don’t realize what we have in our hands. Here, people can learn lots about agriculture, with opportunities for Airbnbs, and we have the vineyards, too. People can also work online. You just have to be unafraid of responsibility. To live as a community.”

When I ask Kostas how important community is to him, he struggles to answer me. After a few reaches for words, he stops. “It’s part of my life.” Community doesn’t need explaining for Kostas. It exists, and that’s its vindication. But this intimate existence between neighbors is a marriage that can spook the young.

Through his baking, Kostas makes this marriage look seriously hot. So hot, in fact, that he’s wooing young people from all over the world through his bakery’s doors. A blackboard hanging on its walls boasts over 140 chalked testimonials from enchanted visitors. They comment on Kostas as much as his famous “bread with flowers.” He treats travelers with as much generosity as he does his neighbors.

On our first afternoon in Zitsa, my friend and I had scanned the shut shops in painful realization that the siesta isn’t exclusive to Spain. Noticing two jetlagged girls roaming the streets for snacks, Kostas unlocked his bakery doors to us. My friend’s jaw dropped in delight upon discovering half his biscuits were vegan. She was pretty delirious by the time she learned he baked sourdough. Kostas had us try his newest recipe and the short, sharp, sweetness of that apple pie biscuit is the finest trip by sugar I’ve ever taken.

For the time you’re in Zitsa, Kostas makes you a part of it. It’s no wonder his kindness and creativity have injected young and intrepid interest into his home. “Once I had three generations walk through the door,” he tells me. “A Taiwanese girl, with her father and grandfather. I loved learning about their gentle culture.”

Kostas still bakes traditional bread for Zitsa’s residents, but he’s won some sourdough converts. “It makes me feel well seeing people taste something new.” Between flour and water, locals and travelers, tradition and experiment, Kostas’ baking binds foreign worlds. The alchemy lies in allowing these worlds to enjoy each other and recognizing that they’re all fundamental to his vision for Zitsa. 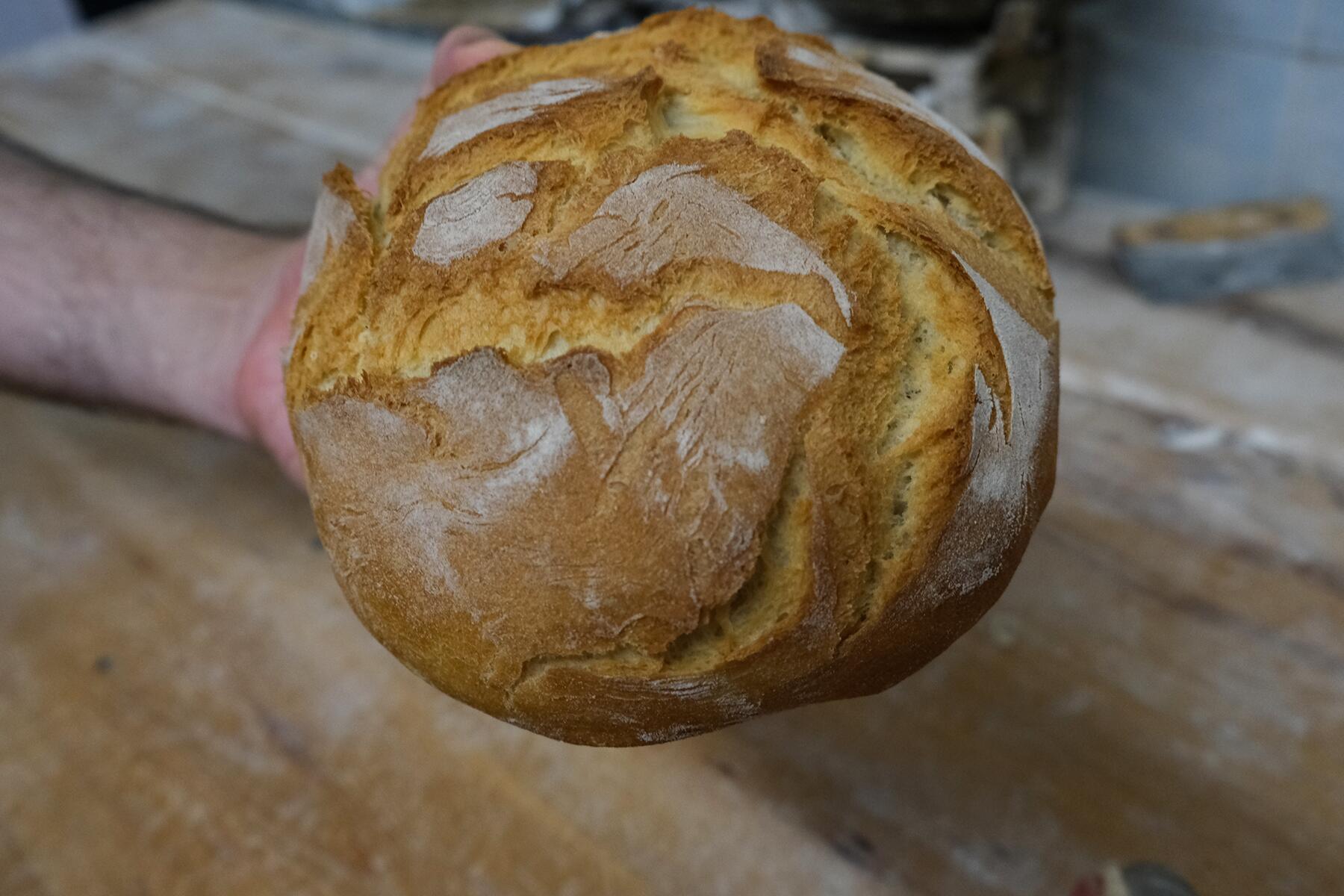 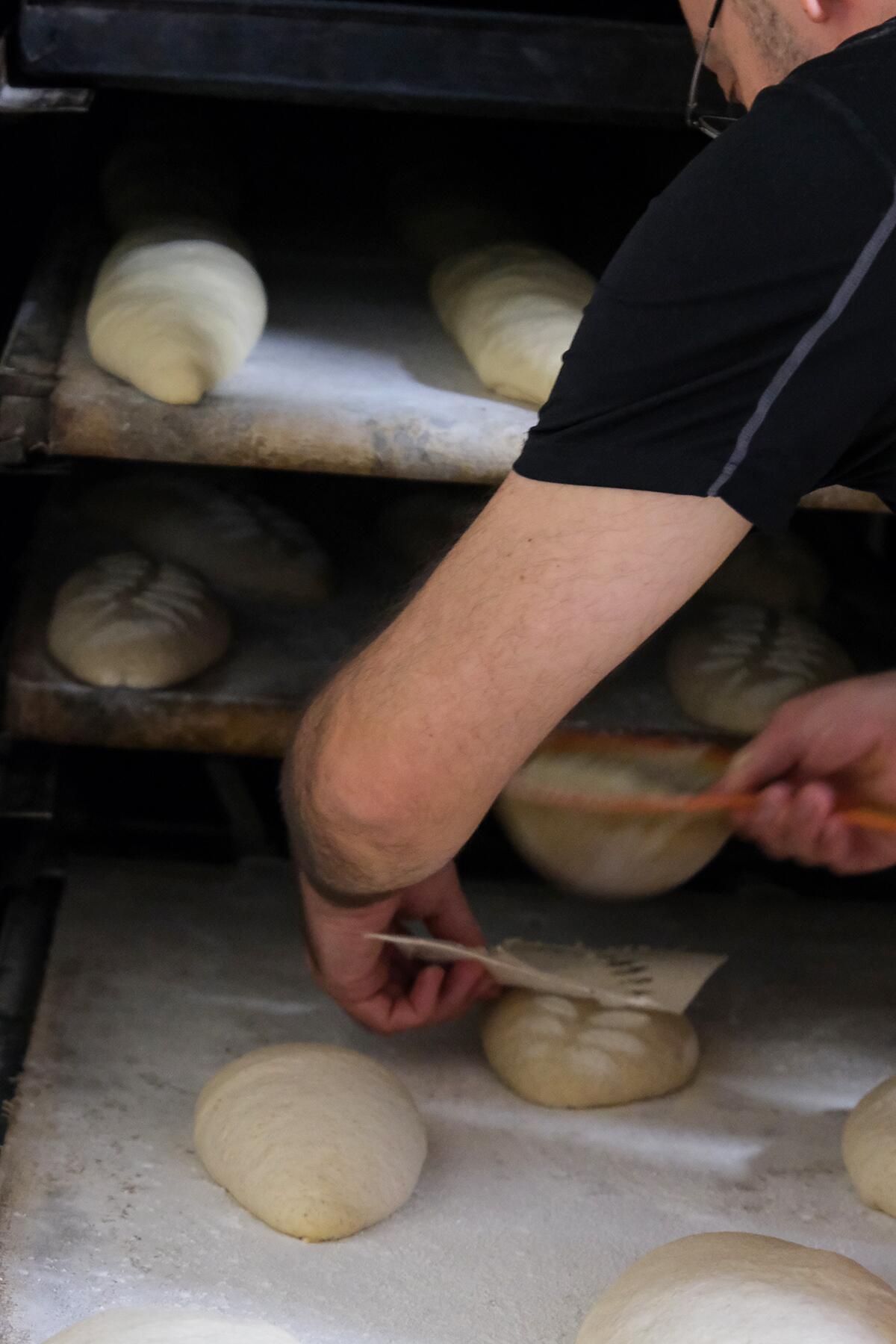 “I imagine walking the streets with our empty buildings full of life again, with shops selling local produce like cheese, honey, wine, and wild mushrooms. I want people to come and kids to play and just for there to be life.”

Kostas and his wife, Anna, also have dreams of opening a cookery school and running artist residencies. They already host a gingerbread house-making party for the community every Christmas. The tradition is American, like Anna, who originally met Kostas while couch-surfing, a traveler herself. Their love affair, and the family it has brought them, is a testament to the magic of an open door.

Back in the bakery, Anna joins us with their daughters. The youngest and I play pat-a-cake in the unswept pools of flour before Kostas cradles her while taking calls. I watch the cogs of his life turning together in this wooden room, and I understand the ballet of baking. This ballet is not a performance. Just like his community, it needs no exposition. It exists.

Before I leave, I ask Kostas how tourists can help Zitsa.

“They can come eat the bread, drink the wine, taste it, take it, share our story.”

Kostas arms us with a week’s supply of bread and biscuits, as my friend and I leave for the Pelion Peninsula hundreds of miles away. Our host there is a kind and reclusive man who lives on the cliffs with his cats and dogs. We proudly tell him about Zitsa only to learn he has already heard of the bread with the flowers. In fact, he’s tasted it himself and doesn’t care to forget.