5 Must-Visit Spots in the Ardeche

By Miranda Mouillot, author of A Fifty-Year Silence

With no major highways, airports, or train stations, the Ardèche is one of the most remote and rural parts of France. Luckily, its close proximity to Valènce and Montélimar makes it an easy train connection from Paris, Lyon, Montpellier, and Marseille, and from there it’s well worth renting a car and getting to know a bit of the region’s wild, untamed beauty. The Ardèche is tiny in terms of geographic area, but its winding roads and secluded backcountry make it feel quite vast. If you’re looking for the best place to get started, here are five of my favorite sights and activities. 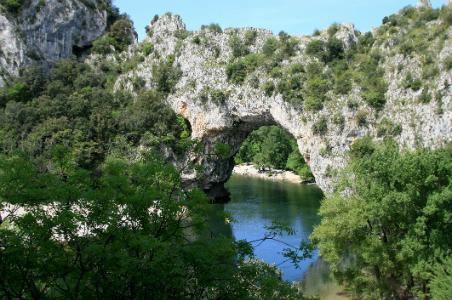 First and most famous is the Pont d’Arc, a majestic natural bridge, which bends its curving hulk over the Ardèche River. If you like canoeing and kayaking, you can rent from one of the many places near the water and paddle down the river as it hews its way through meandering gorges, but if you prefer picnics and swimming, there are also some lovely sand and pebble beaches to explore. The population of nearby Vallon Pont d’Arc expands tenfold in high tourist season, so if you can, stop by in May, June, or September. The nearby Grotte Chauvet, with its 36,000-year-old cave paintings, was the subject of Werner Herzog’s film Cave of Forgotten Dreams and was just named a UNESCO World Heritage Site. Starting in April 2015, you can visit the Caverne du Pont d’Arc Museum and learn more about humanity’s first, startlingly beautiful works of art.

Further north is another imposing rock: the Mont Gerbier de Jonc, the highest point in the Ardèche and a truly formidable example of natural architecture. It’s a short, if somewhat rugged, hike to the top, where you’ll find an unparalleled view of the Massif Central. When you come back down, you can enjoy a well-deserved artisanal ice cream or take home some cheese and sausage from the little market at its base. 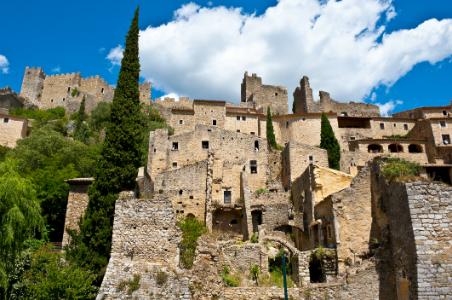 If you prefer civilization to nature, the Ardèche is home to a number of charming stone villages. If you visit just one, I recommend Saint-Montan, where you can wander medieval streets, admire the irises and weeping willows that grow along the stream winding through the town, take a tour of the restored enormous fort around which the village was built, and enjoy a drink on a café terrace overlooking the water. Before you leave, hike up to the little hermit’s dwelling perched on the cliffs behind Saint-Montan—there’s nothing quite so lonely, romantic, and compelling.

If all this nature and art has made you hungry, you are in luck—two of the finest restaurants in the Ardèche are just a short ride away. Le Gafferot in Le Teil is an off-the-beaten-track culinary gem that, alone, is well worth the trip. Call ahead for a reservation, and don’t be put off by the décor, which looks like it might have been selected by Elvis Presley. The service is friendly and welcoming, and the food is some of the best I’ve tasted in France, at less than half the price you’d pay in the big city. For a slightly more classic French dining experience, try the Auberge de Montfleury, which features a warm, hushed, elegant dining room and a chef who is passionately committed to preserving France’s culinary heritage with sophisticated takes on the local and traditional cuisine. 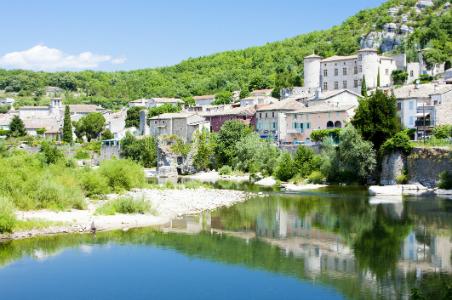 If you feel like reconnecting with modern times while maintaining the medieval setting, take the long way through Saint Remèze to the Château de Vogüe. The village of Vogüe has been officially recognized as one of France’s most beautiful, and its privately owned castle is home to a nonprofit that organizes two to five top-flight contemporary art exhibits each year. You can go home with an extraordinary painting by an up-and-coming or long-established artist or simply take an hour to admire the art. Once you’re done, slip back into your bathing suit, grab some ice cream, and head down to the sandy beach lining the river that runs along the south side of the village.

Miranda Richmond Mouillot is an independent writer, translator, and editor. Born in the heart of the Blue Ridge Mountains, she now lives in a remote hamlet in southeastern France with her husband, daughter, and cat. She received a PEN/Heim Translation Fund grant for her forthcoming translation of The Kites, celebrated French novelist Romain Gary's last novel. Her first book, A Fifty-Year Silence: Love, War, and a Ruined House in France, (Crown Publishers) tells the story of her grandparents' mysterious half-century estrangement. She learned about France's favorite drink while waitressing in a wine bar in Paris, and then, once she moved south, from her neighbors, of whom a staggering number are vintners.