The Caribbean region is a tropical paradise, but there are things you need to know before you embark on your next sunny holiday to make sure everything runs smoothly.

Palm trees, sandy beaches, turquoise waters, great music… you’ll find all that, and more, throughout the Caribbean. Most islands are easy to get to, and easy to vacation at, but even so, there are some things every traveler needs to know before going to the Caribbean. These helpful tips will help you decide when and where to go, what to expect when you’re there, and what you might like to do. 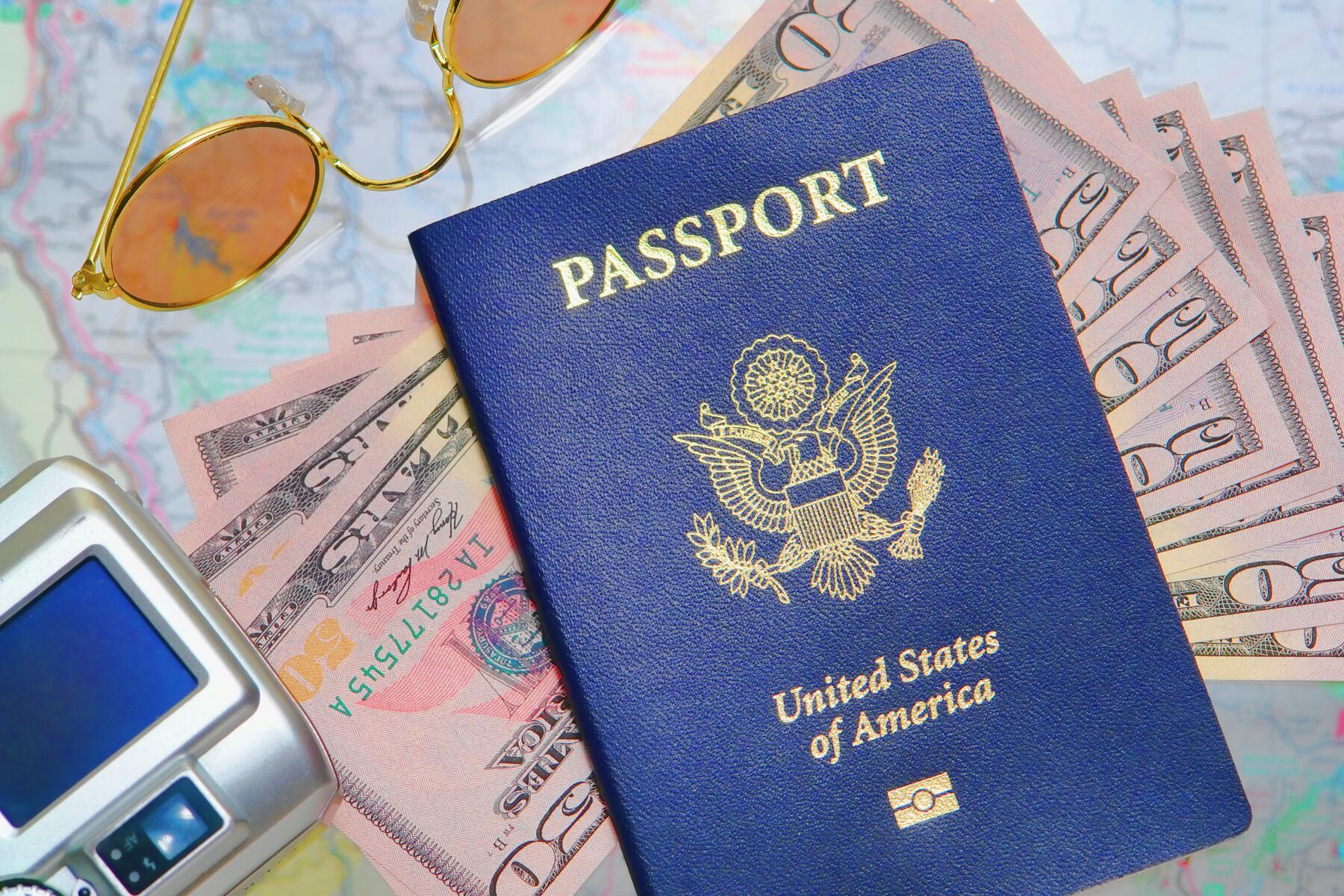 Bring Your Passport… and U.S. Dollars

You’ll need a valid passport to enter any of the Caribbean islands—and to re-enter the United States—except for Puerto Rico and the U.S. Virgin Islands. Most non-U.S. islands also require a return or ongoing airline ticket. But don’t worry about the local currency. U.S. dollars—but not coins—are widely accepted everywhere. Bring small bills, though, as you’ll almost always get change in local money—including from an ATM. Actually, there are 13 different currencies in the Caribbean: The Bahamas, Barbados, the Eastern Caribbean islands, Cayman Islands, Jamaica, and Trinidad and Tobago all have their own dollars; Cuba and the Dominican Republic have pesos; the French islands use euros; the Dutch islands have guilders, although Aruba uses florin; and then there’s the Haitian gourde. 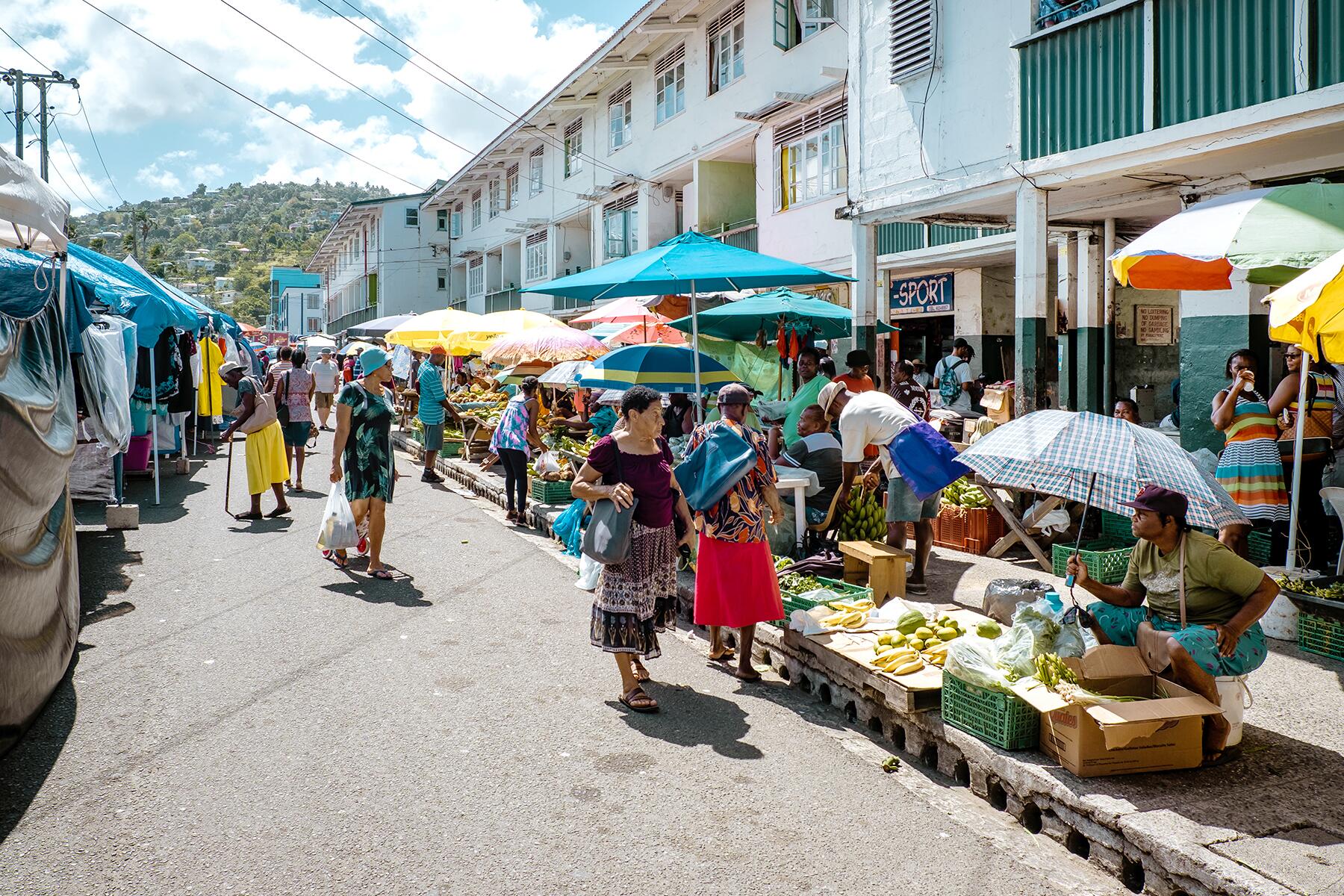 English is commonly understood, spoken, and written throughout the Caribbean, although French is the preferred language on Guadeloupe, Martinique, St. Barth, St. Martin, and Haiti. You’ll also hear a French-Creole patois spoken in Jamaica, Saint Lucia, St. Vincent, Grenada, and Haiti. On the Dutch islands, you’ll hear both Dutch and English spoken, while Papiamento (which adds Spanish, Portuguese, French, African, and Arawakan elements to the Dutch/English mix) is the local patois in Aruba, Bonaire, and Curaçao. Spanish, of course, is the most prevalent language in the Dominican Republic and Cuba; but in Puerto Rico, a U.S. territory, Spanish and English are both official languages. All of that said, English-speakers should have no problem understanding or being understood in the Caribbean. 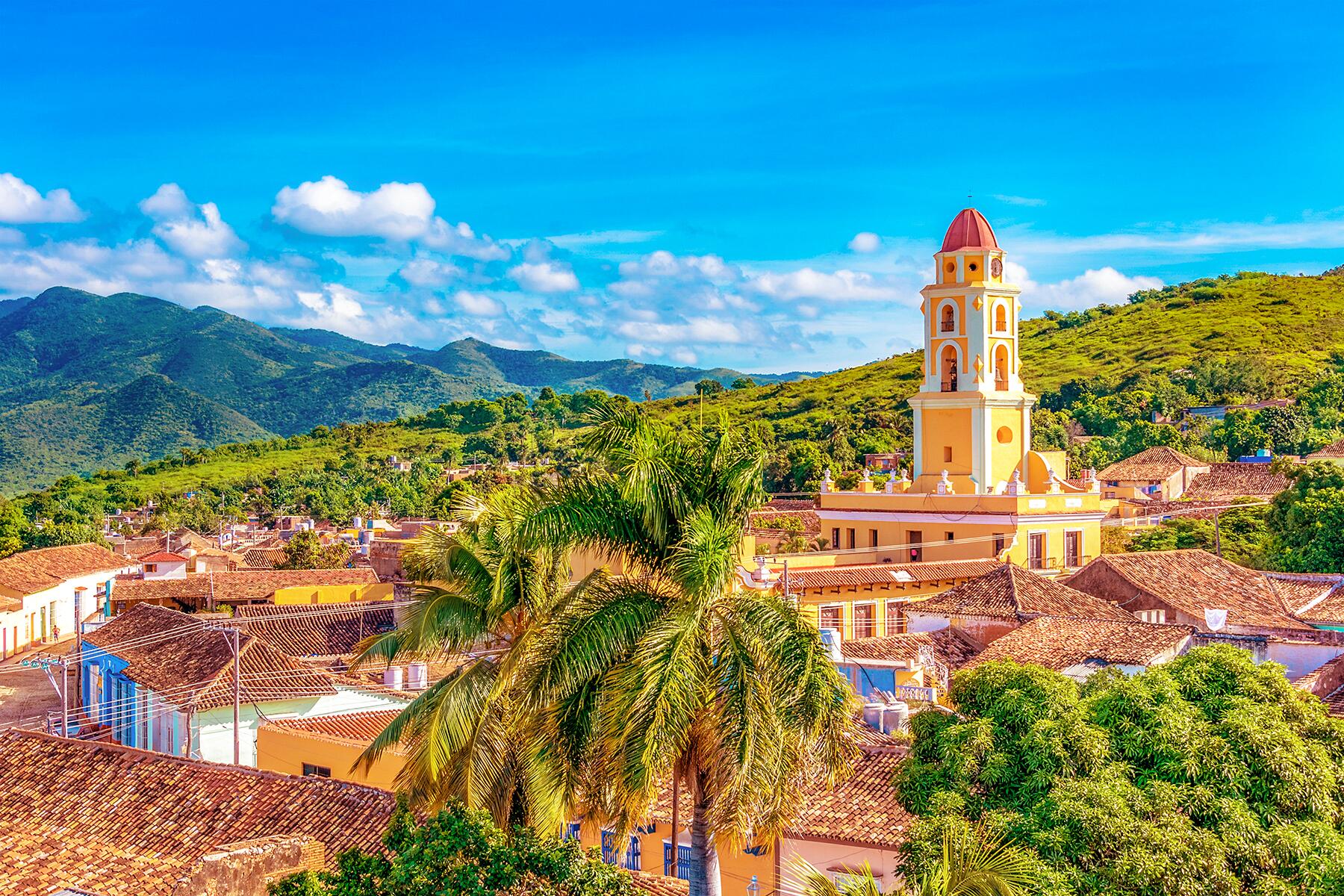 A Caribbean vacation is just the ticket to escape the cold and blustery winter in much of the United States. And that, of course, is “high season”—the period between December 15 and April 15, and especially the holiday weeks at the end of the year. But wait! The weather in the Caribbean doesn’t change much from month to month, although late summer and early fall are generally more humid. So whenever you’re in the mood to escape, don’t hesitate. Things do wind down in the “low season,” which is really most of the year, but prices for accommodations and flights are also lower. The only caveat: In September and October, disruptive tropical storms (aka hurricanes) are at their peak. 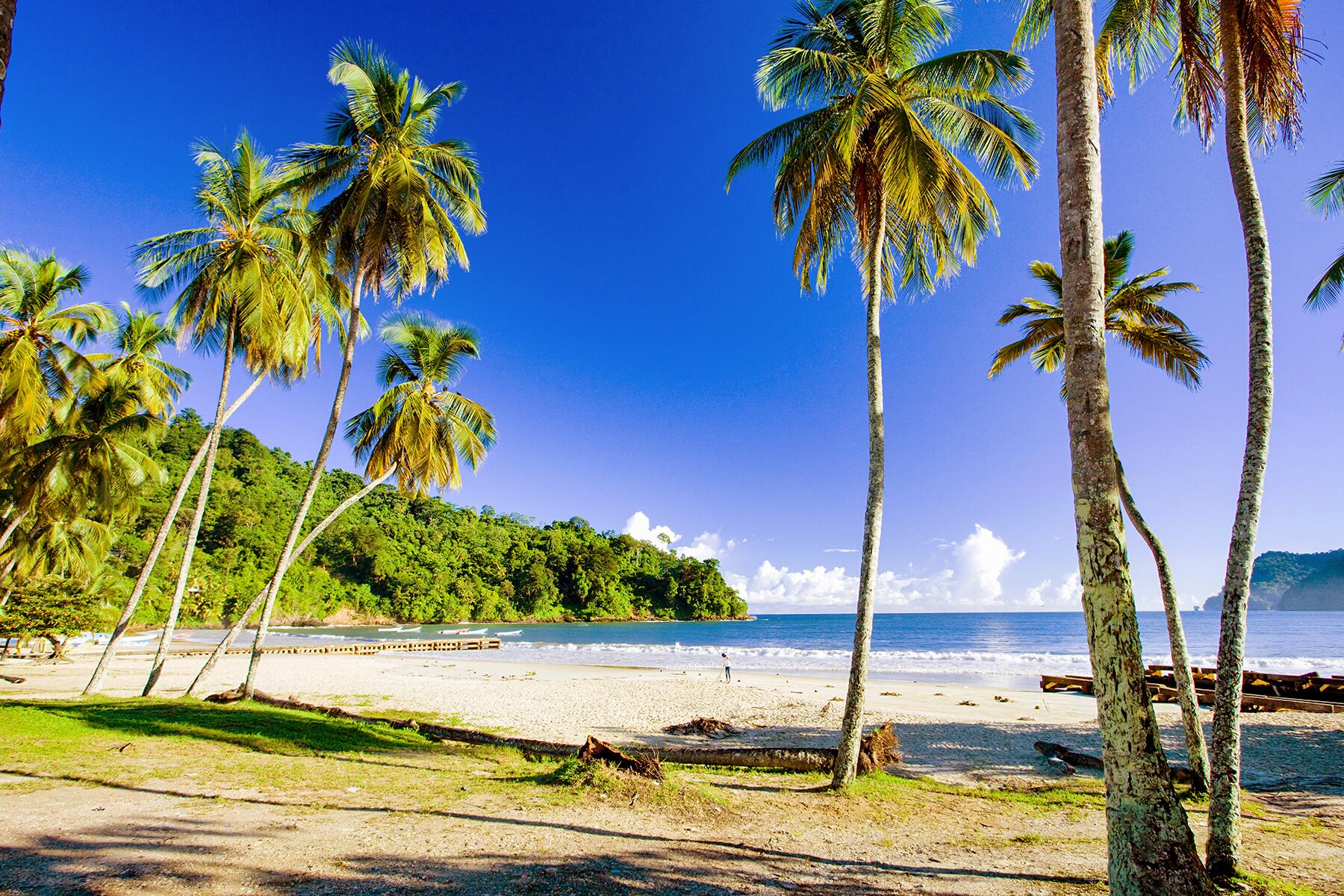 Not All Islands Experience Hurricane Season

Speaking of hurricanes, when those storms come roaring across the Atlantic Ocean in the fall, they usually aim directly at the Leeward Islands, sometimes the Windwards, often the Virgin Islands, and eventually the Greater Antilles. Islands that don’t get a direct hit may experience storm surge and serious flooding. Oddly enough, given its location out in the ocean, 100 miles east of the Caribbean archipelago, Barbados normally escapes hurricanes—although it can experience periods of torrential rain and flooding in the fall. The southernmost islands—Aruba, Bonaire, Curaçao, and Trinidad and Tobago—are out of the “hurricane zone,” so weather there is always sunny and warm with little rain. Grenada, too, is fortunate. The last hurricane to hit the island was Ivan in 2004. While Ivan devastated Grenada, it was the island’s only destructive hurricane since Janet in 1955—nearly 50 years prior. 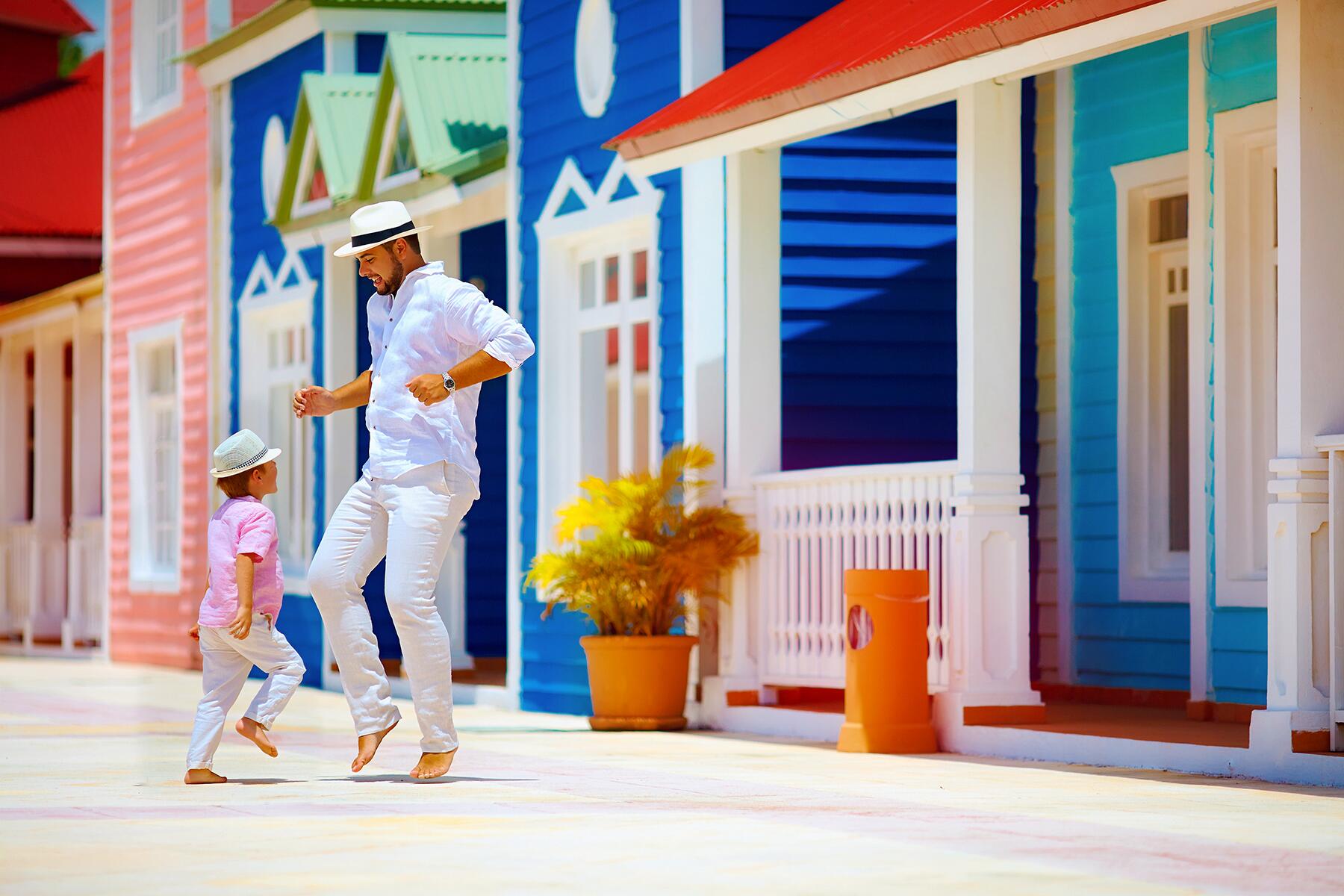 This Is a Multigenerational Destination

You love the beach, little kids love the beach, teenagers love the beach, even Grandpa and Grandma enjoy the beach . . . and the pool, the activities, the food, the music, and everything else about a Caribbean vacation. Many island resorts have (usually free) children’s programs to keep youngsters enthralled for a few hours or all day, giving parents a chance to take a tour, enjoy water sports, play golf or tennis, or just have a quiet meal together. Several all-inclusive resorts specifically cater to families, like Beaches in Turks and Caicos and Coconut Bay Beach Resort & Spa in Saint Lucia. Others let kids under 12 (or 16) stay free in the parents’ room, and some have specifically designed “family rooms” that afford more privacy. You’ll have a wonderful vacation—together—that you’ll never forget. 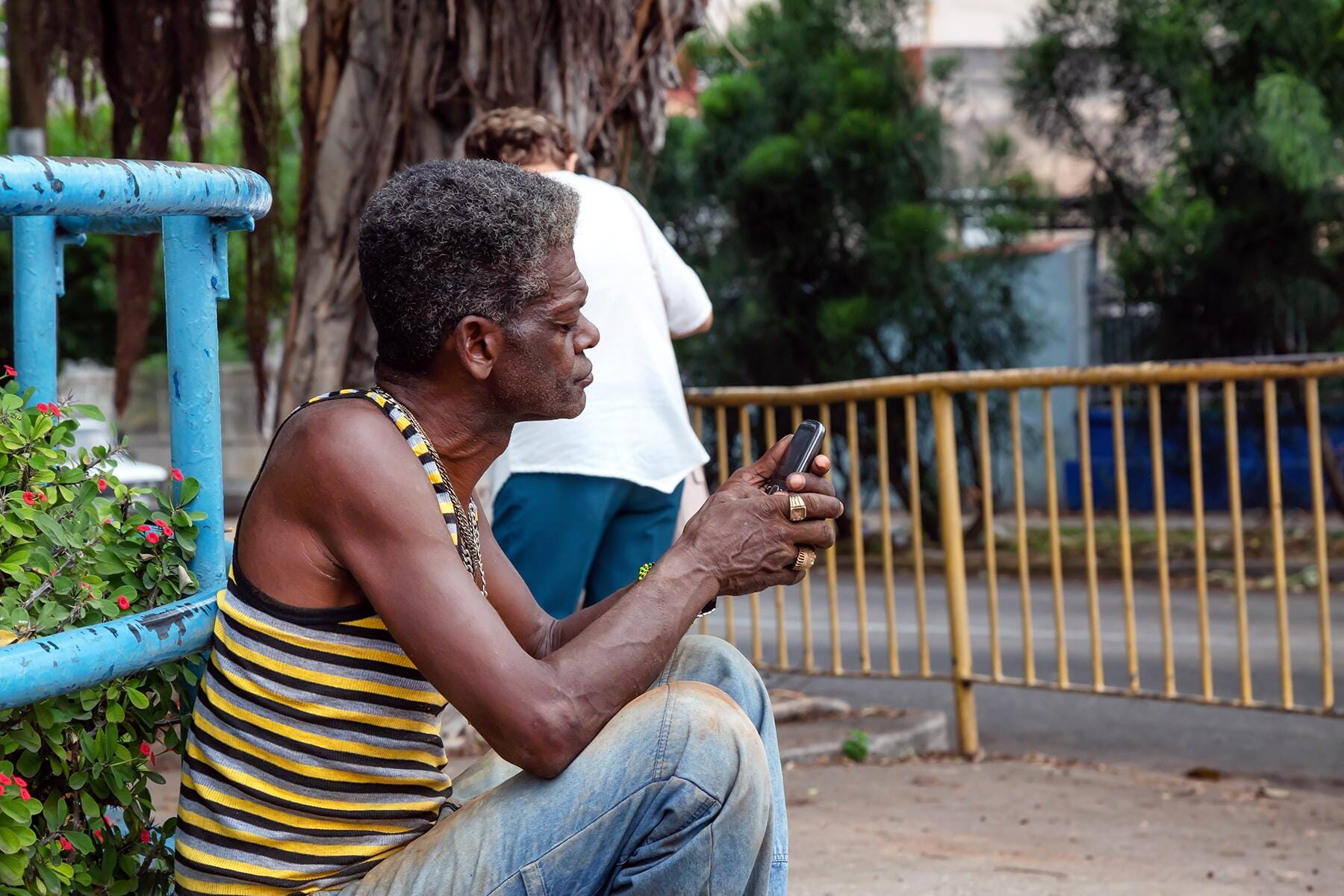 Wi-Fi is available—and usually free—at most resorts and hotels (even very small inns) throughout the Caribbean. You can also plug in your charger(s) and any other dual-voltage devices and accessories right in your hotel room. Some entire islands use U.S. standard current (110v), and many individual hotels have installed 110v plugs in guest rooms. If not, the hotels will usually let you borrow an adapter if you haven’t brought your own. (They’re inexpensive to buy.) Your phone will work, too, but beware: Roaming charges for calls, whether local or overseas, are prohibitively high unless you’ve arranged an international plan with your provider.

INSIDER TIPDon’t forget to sign in to the free Wi-Fi offered through your hotel or resort, especially if you (or your kids) plan to be online a lot. 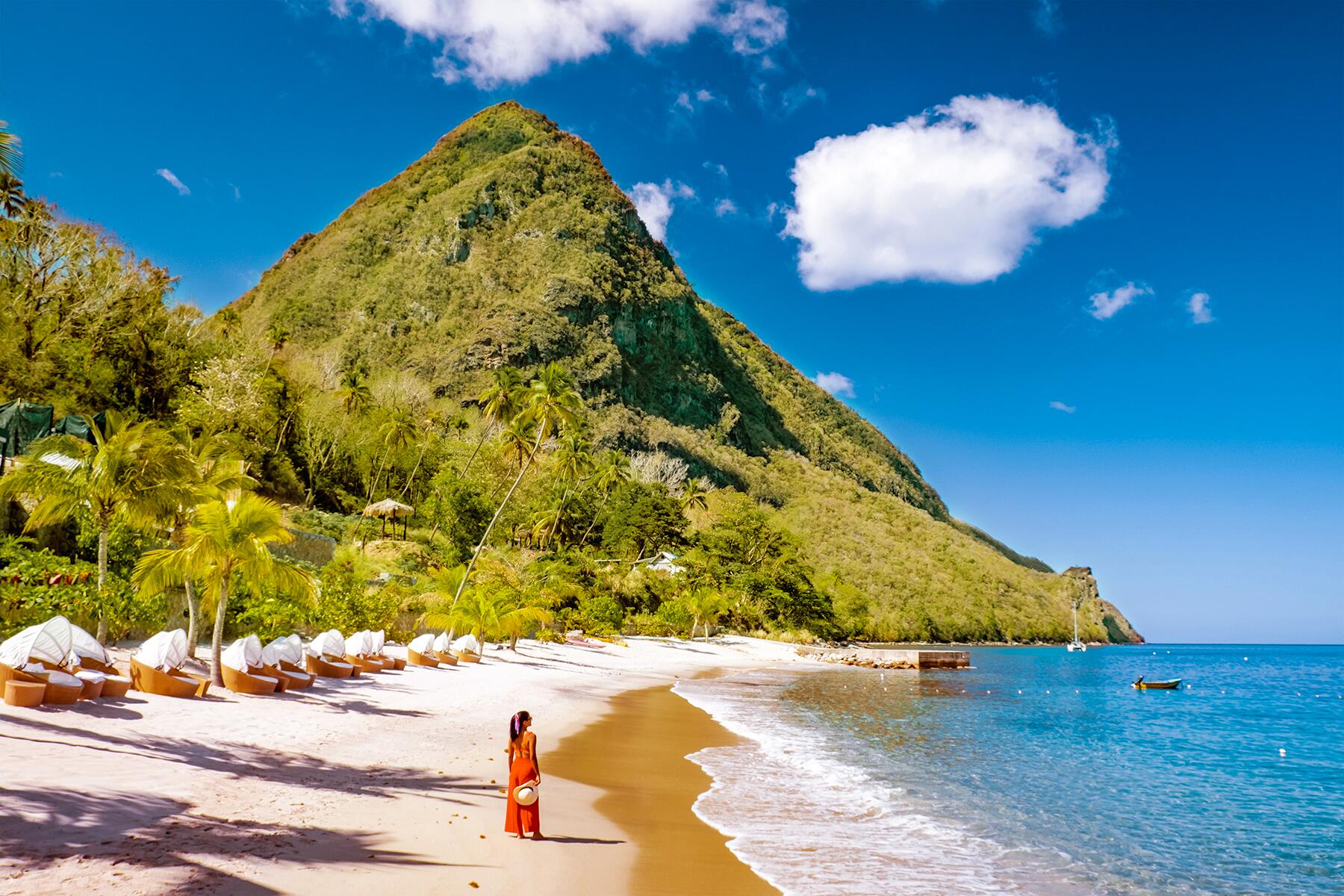 Beaches—They're What You Came For

You’ll find the pristine white-sand Caribbean beaches of your dreams on the flattest islands—Anguilla, Antigua, the Grenadines, Anegada in the British Virgin Islands, and the Bahamas—and on relatively flat areas of islands like Grenada or Tobago. On mountainous islands—Puerto Rico, Jamaica, Saint Lucia, and elsewhere—the sand is more golden in color. Islands with volcanic geology (St. Kitts, Nevis, Guadeloupe, Montserrat, Dominica, and St. Vincent) have stunning black-sand beaches. As for pink-sand beaches, you’ll find them in Barbados, Bonaire, and Barbuda, and on Eleuthera and Harbour Island in the Bahamas. Nude bathing is accepted on French and Dutch islands—such as St. Martin, St. Barth, and Guadeloupe—but frowned upon or downright illegal elsewhere, although Negril in Jamaica and Antigua do have beaches with clothing-optional areas. What about the water? Those flat islands mentioned above have no rivers, so their beaches also have the clearest water. 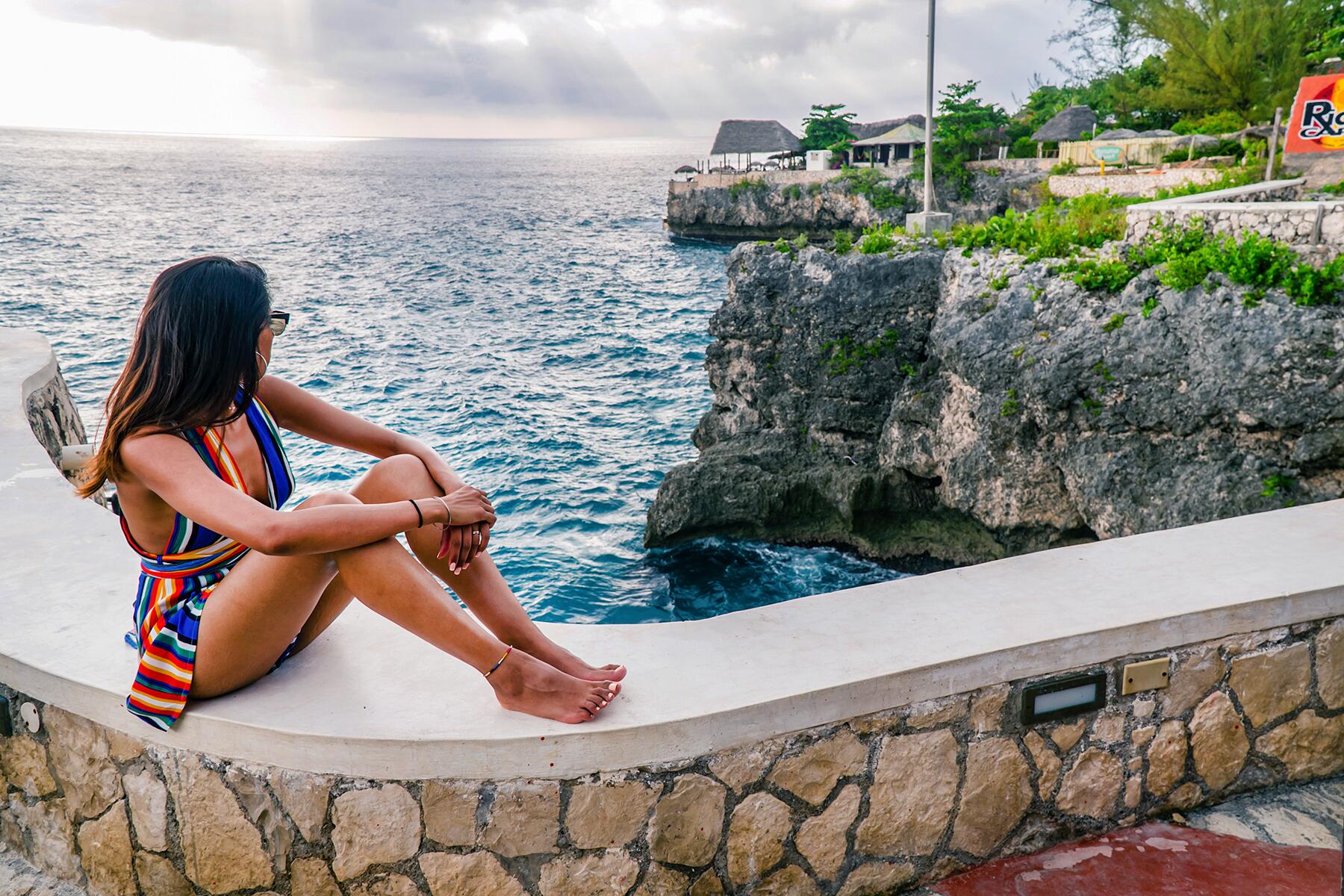 Think About Island Hopping—by Sea or by Air

A multi-island Caribbean vacation or a day trip to a nearby island is easy to accomplish, as many islands are in close proximity and have frequent, reasonably priced ferry and/or air service (small planes and sometimes seaplanes). Some Caribbean nations are already multi-island (U.S. Virgin Islands, British Virgin Islands, Cayman Islands, Turks and Caicos, St. Vincent and the Grenadines, the Bahamas); some are dual-island nations (Antigua and Barbuda, St. Kitts and Nevis, Trinidad and Tobago); some have separate off-shore islands (Puerto Rico’s Vieques and Culebra, Guadeloupe’s Les Saintes and Marie Galante, Grenada’s Carriacou and Petit Martinique); and others are just in close proximity (St. Martin and Anguilla, St. Maarten and Saba or St. Barth, Saint Lucia and Martinique or Dominica). Expand your adventure—you’ll thank us later. 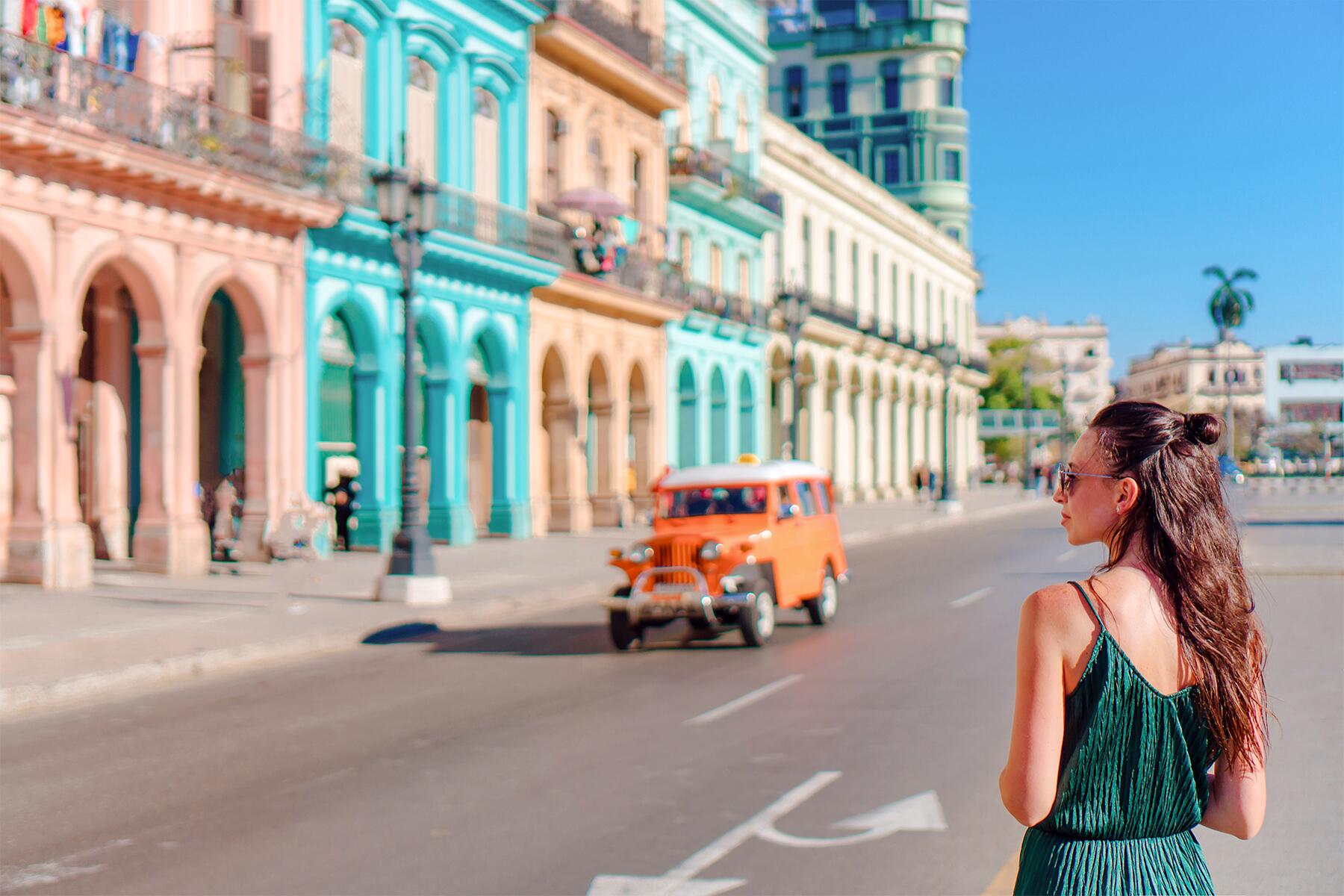 If you’re staying in a remote or out-of-the-way location, but plan to explore, eat out, or visit distant sights or beaches, then definitely consider renting a vehicle—car, jeep, mini moke (beach buggy), or scooter. Be aware, though, that driving can be a challenge on narrow, winding roads on mountainous islands—especially at night and often on the left side of the road, British-style. Taxis and inexpensive public buses (or private vans that operate like buses) are always an option, and drivers are generally well-informed and will take you where you want to go, when you want to go, for as long as you wish, at an hourly rate. Just keep in mind the cost. 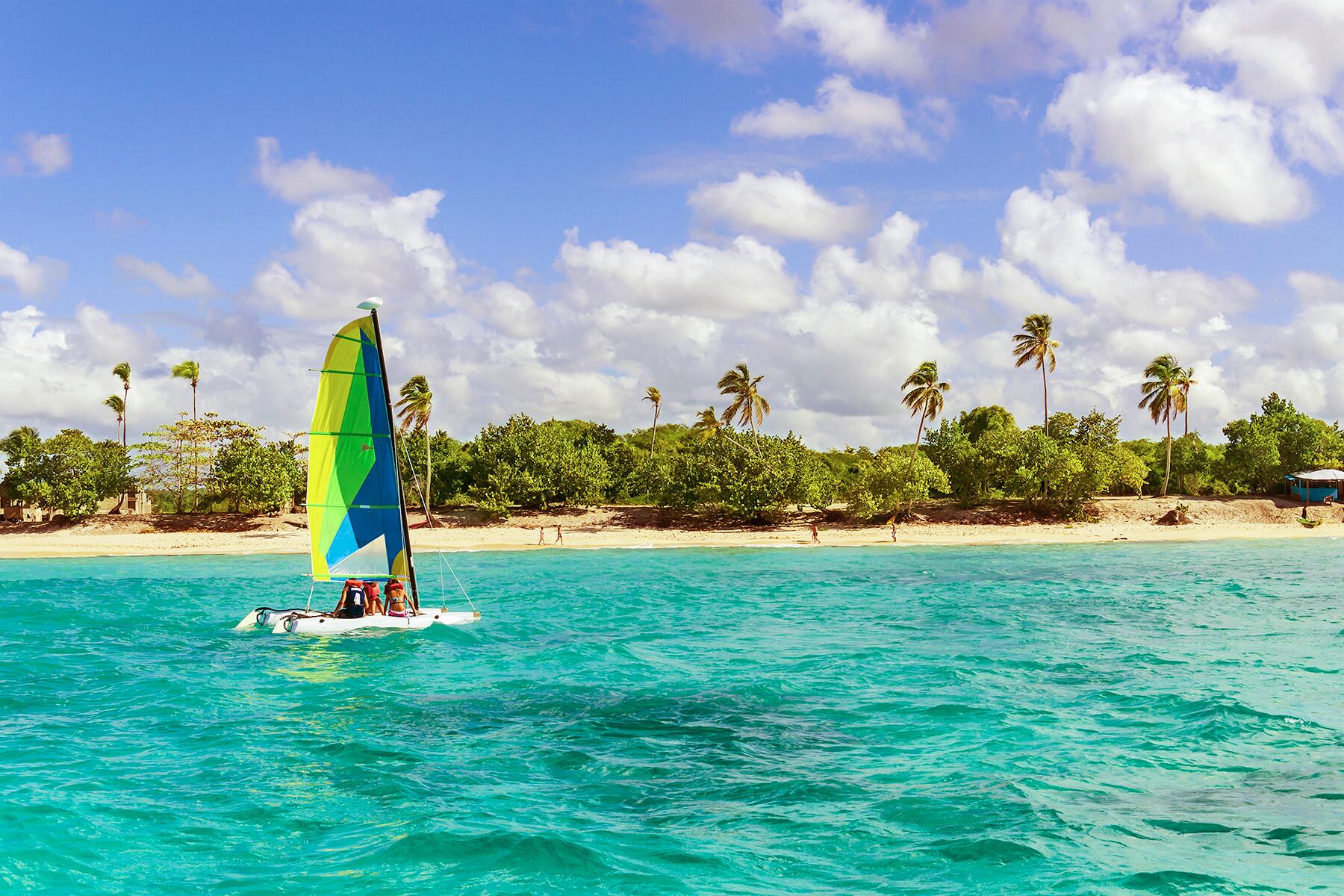 Get out on the Water

Beachfront hotels and resorts usually have lots of “water toys”— snorkels, kayaks, floats, Hobie Cat or Sunfish sailboats, and sometimes pedal boats, windsurfers, and stand-up paddleboards. Perhaps you’d like to try to scuba dive, waterski, Jet Ski, parasail, or kitesurf? Or maybe you’d like to go fishing or whale-watching. It’s all possible, even if your lodgings are not on a beach. A real treat, though, is a sailing adventure—either a day trip on a party boat, available on most islands, or a weeklong excursion on “your own boat.” Antigua, Saint Lucia, St. Vincent, and Tortola in the British Virgin Islands are major yachting centers, where you can arrange a charter with or without captain and crew. The Virgin Islands (both U.S. and British) and The Grenadines, in particular, are magnificent sailing waters, with lots of picturesque small islands and cays where you can lay anchor, take a swim, and go ashore. 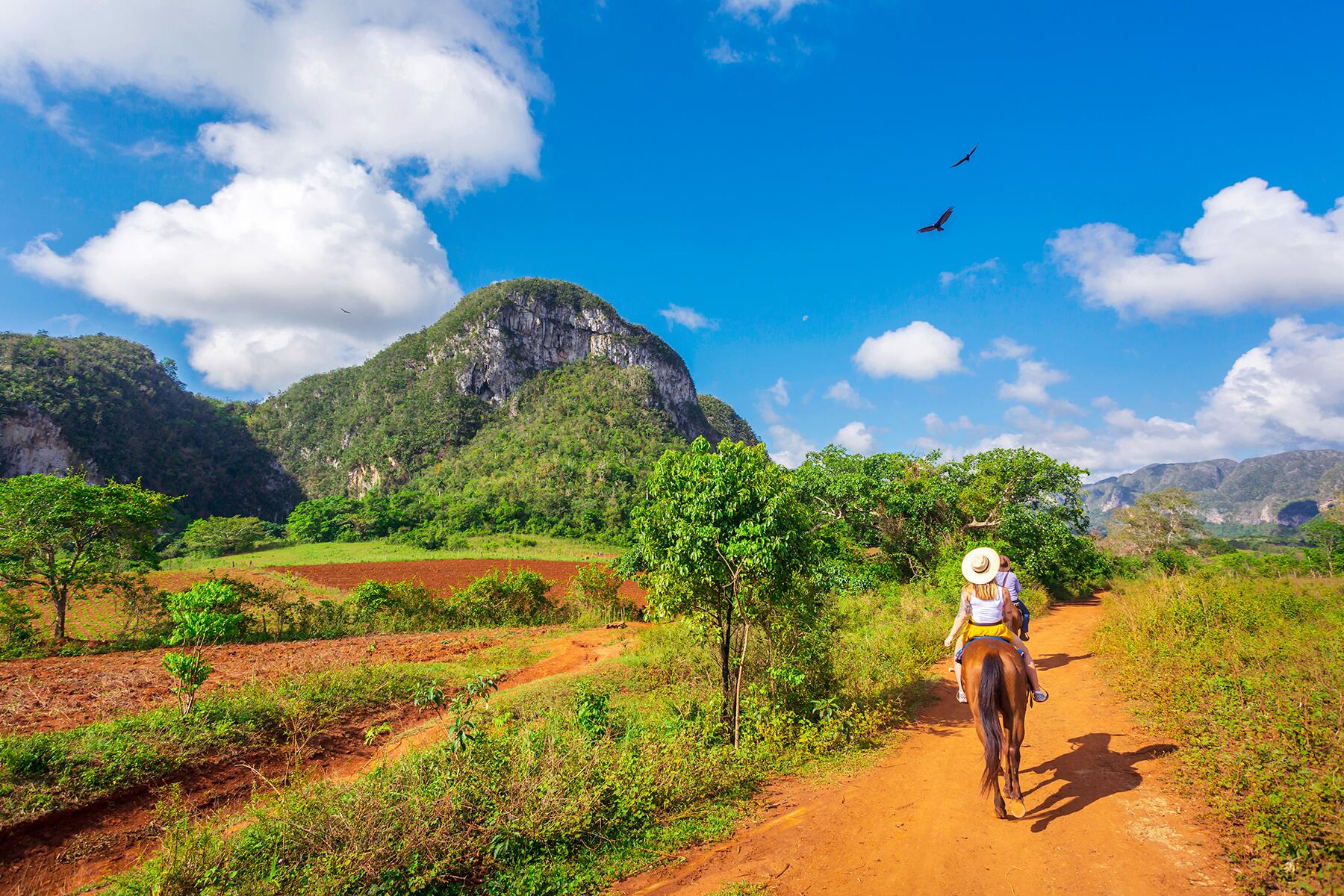 There’s More to Do Than Lie on the Beach

Beaches in the Caribbean are a must do, but don’t miss out on all the other possibilities the island’s hold. There’s hiking, ziplining, horseback riding, mountain biking, and bird-watching. There are rain forests and underground caves to explore and botanical gardens and volcanos (yes, volcanos) to visit. We’d be remiss if we didn’t mention the plethora of golf courses at your fingertips. And if you dare, you can join an ATV safari for an exhilarating hour or two. So much to do, so little time! 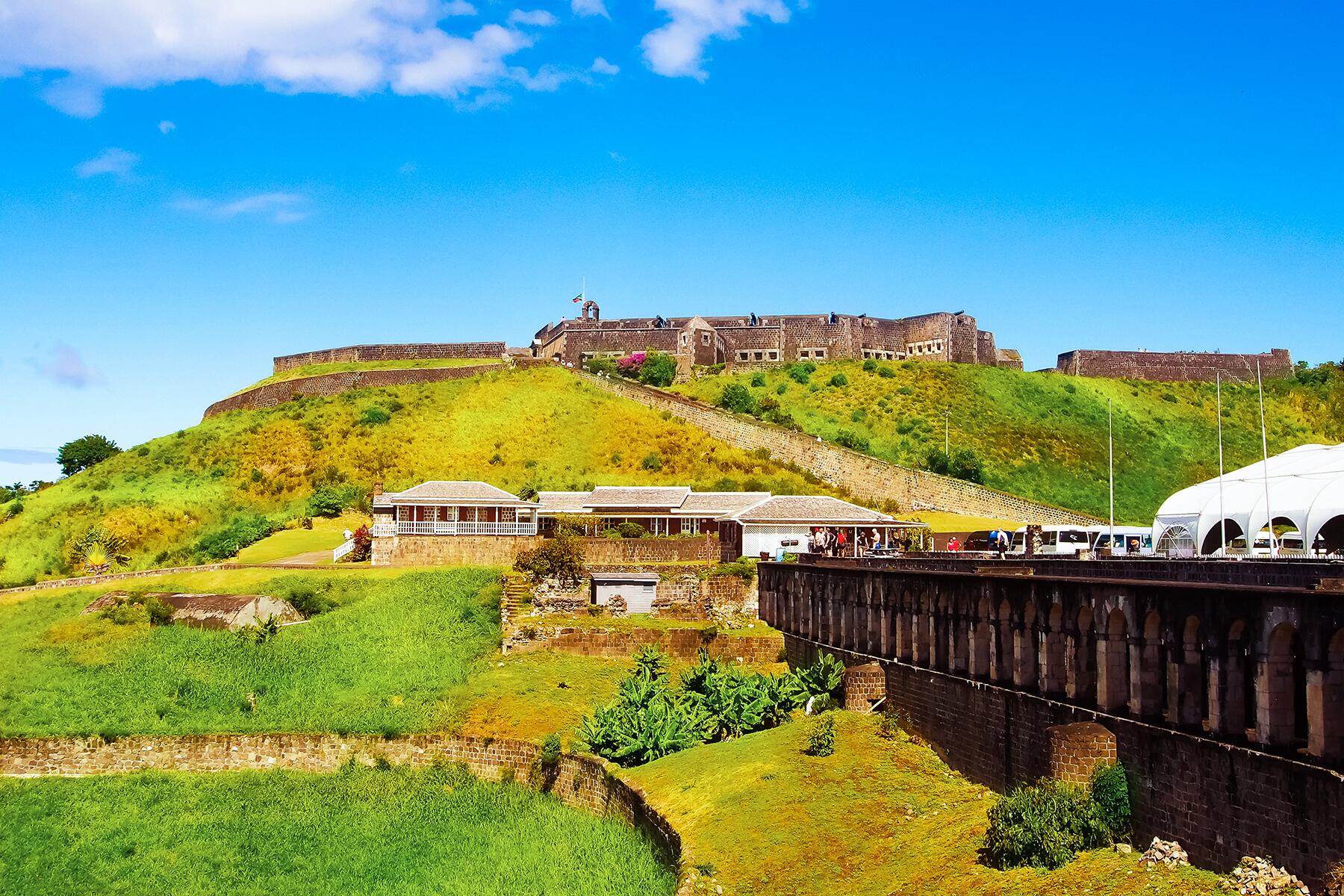 These Islands Have History

Spain, England, France, The Netherlands, even Denmark colonized one or more of the Caribbean islands, and each country left its mark. Understanding the history of the island you’re visiting can add depth to your vacation. Forts, garrisons, and military lookouts usually provide the best views of the island and the surrounding sea, but you’ll also learn why, when, and by whom the island needed defending. And visiting a plantation “great house,” particularly in Barbados and Jamaica, provides a beautiful view of how the planters lived and a not-so-beautiful view of why they were able to live that way. Wander around Nelson’s Dockyard in Antigua, Old San Juan in Puerto Rico, Scharloo in Curaçao, Brimstone Hill in St. Kitts, even Alexander Hamilton’s birthplace in Nevis. Each one provides an easy history lesson—for you and for your kids. 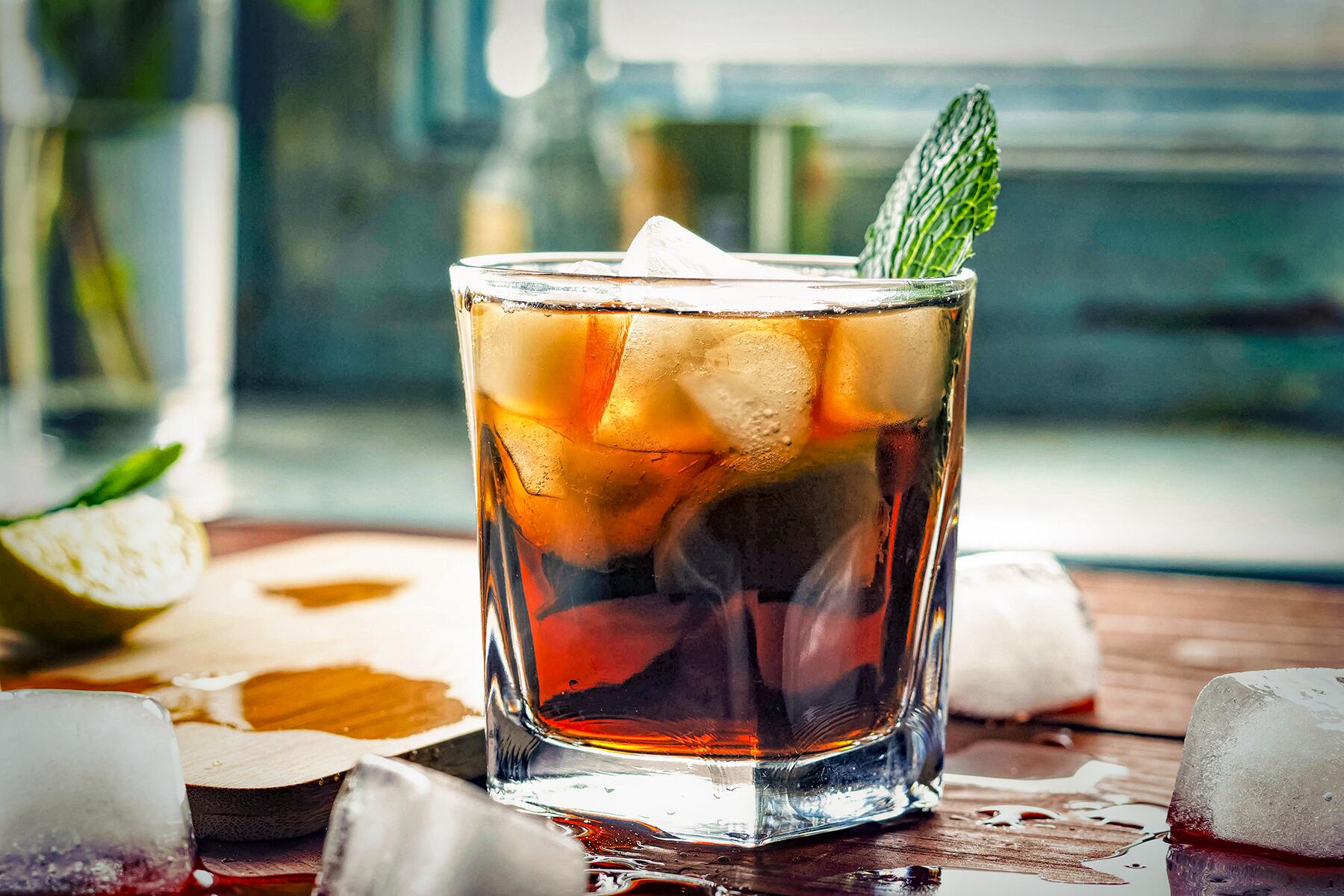 Ahh, rum. Whether you take it neat (or with a little water, as islanders often prefer); with Coca Cola and a twist of lime; in a planter’s punch with a dusting of nutmeg; or in a fruity mixture with an umbrella on top—rum is the alcohol of choice throughout the Caribbean. It has been this way since sugar plantations reigned in the 18th and early 19th centuries. Many islands still grow sugar cane, but even more islands produce rum—dozens of brands—and nearly every island has its own. You can visit the distilleries, too—most notably Mount Gay in Barbados, Appleton Estate in Jamaica, and Casa Bacardi in Puerto Rico, but also smaller operations like Cruzan in St. Croix, Bounty in Saint Lucia, and the extremely rustic and fascinating River Antoine in Grenada, which has followed the same traditional process since 1785. 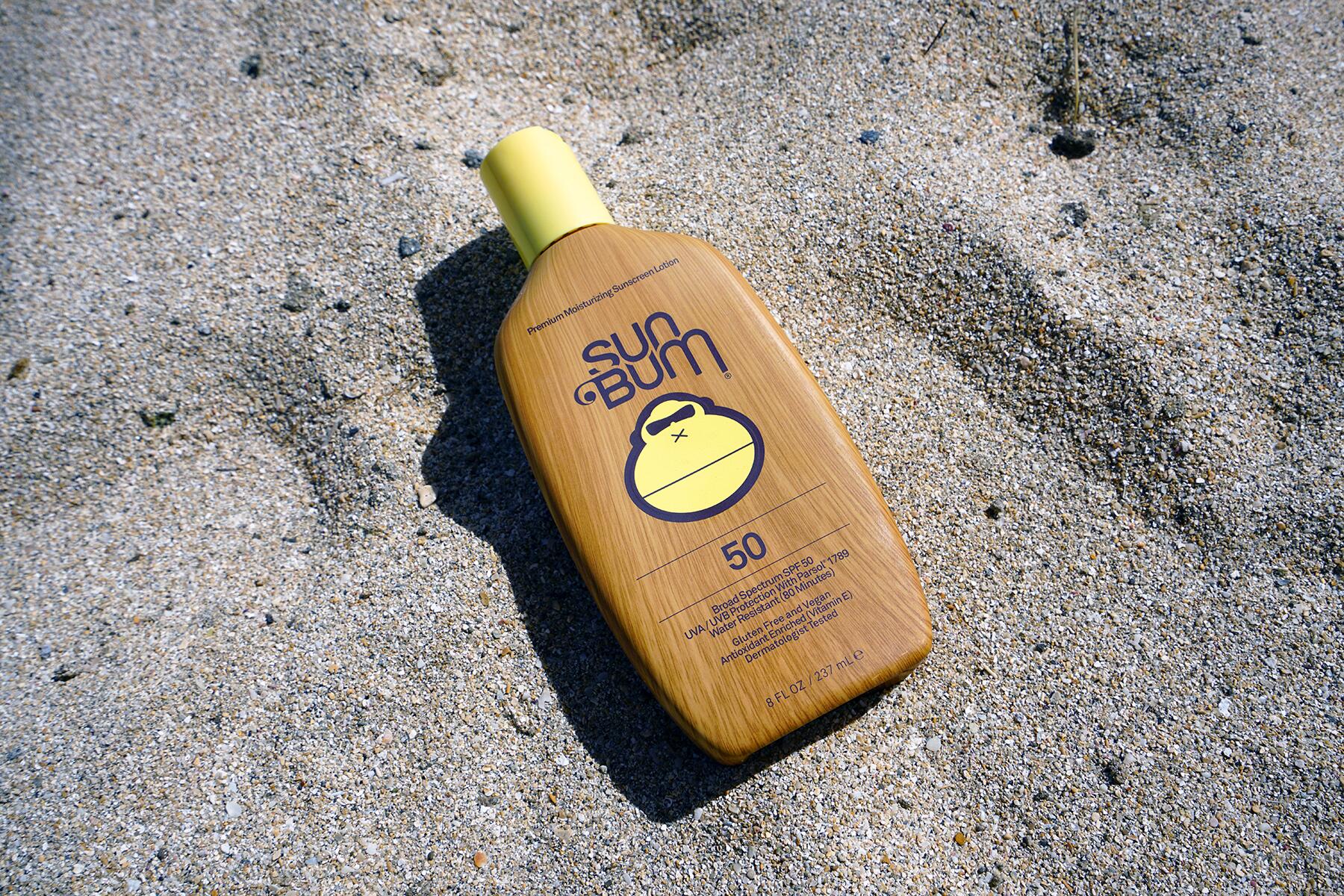 Coral Reef Safe Sunscreen Is a Must

Coral reefs are dying at an alarming rate. Unfortunately, one of the major contributors is sunscreen, more specifically the chemicals oxybenzone and octinoxate found in many over the counter sunscreens. Luckily, numerous companies like Sun Bum, Blue Lizard, and Thinksport offer reef-safe alternatives. So check those labels before you buy your next bottle. It’s the reef thing to do. 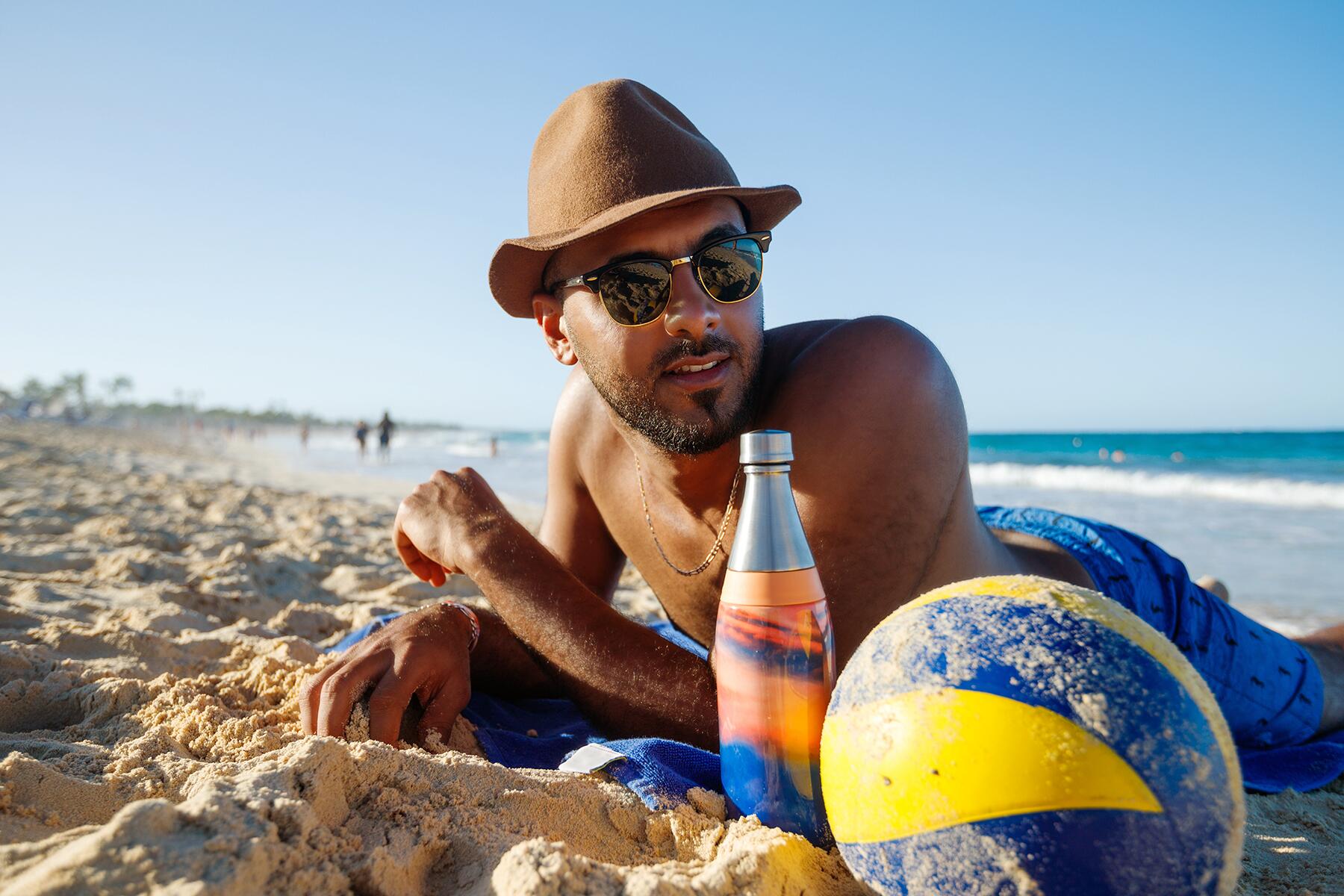 The average temperature in the Caribbean is around 80 degrees, so it’s no wonder people are always drinking (this is the capital of fruity, frozen cocktails after all), and using plastic straws and cups and disposable water bottles. Unfortunately, these are also major contributors to the garbage found on the island’s famous beaches. Numerous properties are starting to do away with plastic straws and offer alternatives to plastic water bottles, but why not bring your own bottle (or straw)?