Thanks to rising ocean temperatures, and a lack of investment and knowledge on behalf of Thai stakeholders, deadly jellyfish encounters are on the rise.

Your standalone bungalow at the budget resort you booked on the lush Koh Samui is small but clean, and after the flight from Bangkok’s Don Mueang airport all you want to do is strip out of your travel clothes, throw on a swimsuit, and jump into the sparkling azure waters of this world-famous Thai island.

Your plans come to a sudden, terminal halt when you see the small laminated card resting on your bed which reads,

“Dear Guests: There are reports that the box jellyfish has been located along the coasts of Koh Samui. The box jellyfish is poisonous and can cause serious injuries. Therefore, we advise our guests to stay out of the sea and to use our swimming pool until further notice.”

You look out into the courtyard in the center of the bungalow where the pool rests. It’s circular and just large enough to accommodate a few small groups of adults, or one family with poorly behaved children. A grown man stands in the center of it and the water barely comes up to the middle of his chest. Compared to the ocean just a short distance away, it seems particularly pitiful. But, if you don’t want to risk an excruciating injury and the risk of sudden death, this is where you’ll be spending your time for the next few days.

If you’re planning a beach vacation in Thailand and have never heard of box jellyfish, now’s a good time to familiarize yourself. These long, trailing, deadly sea dwellers are appearing in increasing numbers in the Gulf of Thailand and posing a significant problem for tourism stakeholders, who lack the knowledge and expertise to effectively deal with their population surge.

Unlike many jellyfish which are pushed by currents, the box jellyfish can actually navigate itself, making it surprisingly mobile.

There are two things you need to know about box jellyfish and their growing presence in the Gulf of Thailand. The first is that it’s the most venomous marine animal in the entire world. According to the National Ocean Service, being stung by the box jellyfish––also known as the Australian box jellyfish––can lead to “paralysis, cardiac arrest, and even death, all within a few minutes of being stung.” The largest variety can have a body up to one foot across with thick tentacles that can grow up to 10 feet long. Unlike many jellyfish which are pushed by currents, the box jellyfish can actually navigate itself, making it surprisingly mobile.

The second thing you need to know is that while only a few of the roughly 50 varieties are dangerous to humans, there’s evidence that shows the human-killing jellyfish are increasing in numbers off the coast of Thailand. Research suggests the issue is the most serious on the coasts of the islands of Koh Samui, which is famous for its beaches and celebrity sightings, and Koh Pha-ngan, famous for raucous “Full Moon Parties.” Seemingly, neither are prepared for box jellyfish injuries.

Perhaps the most famous and publicly tragic case is that of Shannon Leone Fowler, a marine biologist whose husband Sean was stung and killed by a box jellyfish on a beach at Koh Samui. Her book, Traveling with Ghosts: A Memoir, not only examines her life as it was impacted by the loss of her husband, but also describes how Thai authorities attempted to cover up the true cause of his death by labeling it an alcohol-related drowning. 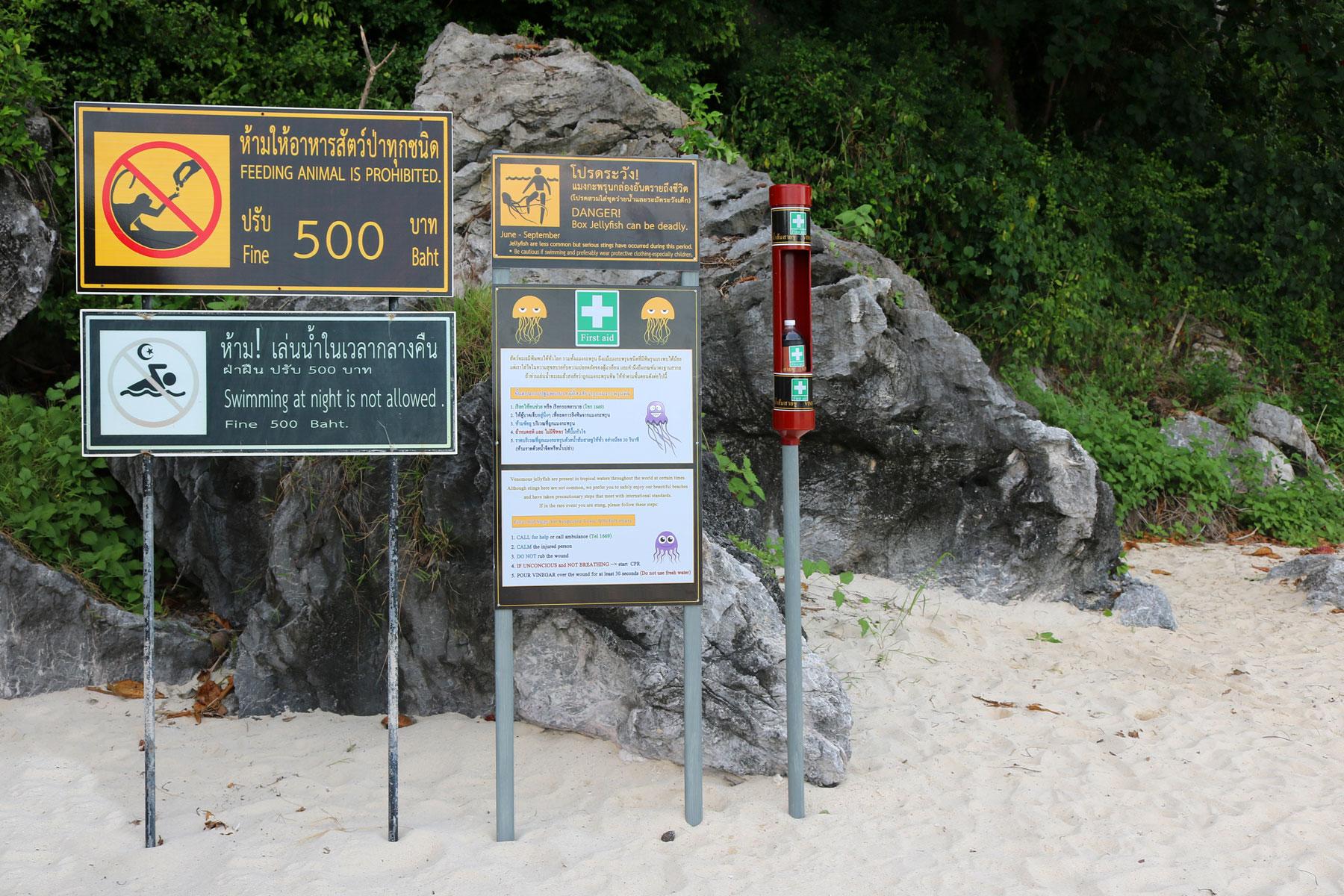 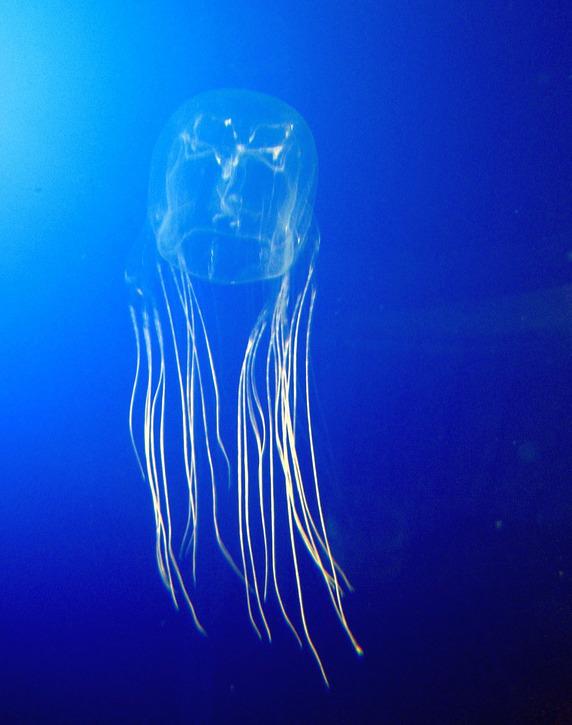 While you’re probably not going to be the victim of a government cover-up, there is a very good chance that, if you’re stung, tourism partners and health authorities will not be adequately prepared to help you. Academic research published in 2016 indicates not just that there’s a general lack of education about how to treat box jellyfish stings, but that “there are various conflicts of interest among stakeholders such as business owners, hotel/resort owners, fishermen, tourist guides, and non-government organizations.”

While you’re probably not going to be the victim of a government cover-up, there is a very good chance that, if you’re stung, tourism partners and health authorities will not be adequately prepared to help you.

After conducting interviews, workshops, and seminars for a period of seven years, these same researchers found that many Thai people simply do not believe box jellyfish stings are potentially fatal, and also lack the knowledge required to help people after they’re stung. The newsroom for the Tourism Authority of Thailand published a news brief in 2017 detailing what to do if you’re stung, with the statement, “Measures are being taken in all of Thailand’s beach resorts to keep swimmers safe. Signs warning of the dangers of jellyfish have been erected, and First Aid stations have been set up to deal with any person who might have been stung.”

Unfortunately, this does not seem to be accurate. Research and personal accounts state that vinegar stations on Koh Samui––which are supposed to appear at regular intervals along beaches––are either nonexistent, in poor repair, or have empty vinegar bottles. Tourism stakeholders have not been adequately trained and individuals don’t believe the risk is real. Beaches don’t have signage indicating that jellyfish are an issue, or they simply state that there are jellyfish but do not provide enough information.

If you came to Thailand for a beach vacation, it’s reasonable if this frustrates and worries you. Pouring vinegar over a box jellyfish sting is known to be an effective, life-saving way to remove clinging tentacles while also diminishing the impact of the venom and reducing pain. It’s not a cure for a sting, but if applied fast enough it will probably keep you alive while you’re transported to a doctor. Despite this, a lack of first aid stations and a lack of knowledge could prevent vinegar from being quickly and effectively applied.

Further confusing things are varying reports about the actual number of box jellyfish encounters in Thailand. While the research referenced above says there were only 15 reported cases of severe box jellyfish encounters between 1997 and 2015, Thai PBS reported that in 2015 (alone) 194(!) people were stung across six Thai provinces. While only two people were reported to have died, that number of encounters is astronomically higher than what has been reported by other news sources and occurred over a much larger area than is typically considered.

Thankfully, it does appear that efforts are being made to stem the rise of box jellyfish injuries and deaths. Dr. Lisa-ann Gershwin, a marine biologist specializing in jellyfish––and particularly box jellyfish––conducts comprehensive week-long seminars in Thailand in conjunction with the Phuket Marine Biological Center. She’s also the creator of The Jellyfish App, which for two dollars will let you not only look up information on jellies and also directly contact Dr. Gershwin with questions and photographs.

The reality is you probably won’t get killed by a translucent, 10-foot-long venomous underwater monster on your vacation. But, bear in mind this remains an issue which has not been adequately addressed in Thailand. Do some investigating before you go in the water and consider asking your seaside hotel about box jellyfish before you book a room. Inquire as to whether the hotel has cordoned off an area of the ocean using buoys and nets. And, if you’re particularly worried, look for a place with a nice pool.