From an international party island to a paradise ghost town, Indonesia’s Gili Trawangan is still left waiting for the return of tourists.

When I left central London in February 2020 for six months of traveling around Indonesia, I didn’t quite anticipate spending those entire six months (and more) on one tiny, remote island in the Lombok Strait with 40 other ex-pats as company.

Gili Trawangan, a famed party island that’s a two-hour speed boat away from Bali, was one of the first Indonesian islands to close its border at the start of the global COVID-19 pandemic. From March 2020, Gili T, as it’s colloquially known, became exit-only—those who decided to leave weren’t allowed to set foot back on the island.

I arrived excited to enjoy the island’s endless beach clubs, international restaurants, and incredible scuba diving. Gili T is a place to have fun: pre-COVID, it was impossible to cycle around the island’s one main road without being tempted by some kind of excursion or experience. At this point, the word “corona” was a distant threat, a far-away virus that would never work its way over to Indonesia, I naively thought.

Those conversation-starter questions of “What would you bring to a desert island?” Suddenly we were playing the real-life version.

Everything changed overnight when the threat of the virus was suddenly thrown into the forefront of the world’s issues. Tables full of international backpackers suddenly emptied out to a select handful of us who weighed up the odds and considered this paradise island to be a better alternative to our home countries.

It was a gamble. Those conversation-starter questions of “What would you bring to a desert island?” Suddenly we were playing the real-life version.

Those who wished to leave the island tackled a speedboat to Lombok, a two-hour drive to the airport, and a plane back to Bali, before domestic flights between the two almost entirely stopped. Then, the only consistent mode of transport was the slow ferry across the Lombok Strait. After one ferry sank and the following ones spent upwards of 12 hours waiting to dock in the port, staying put on Gili T became an even more inviting prospect.

Such a remote location has its pros and its cons. Isolating Gili T from the rest of the world was relatively effortless, considering the only entry point is via the sea.

But even the protection of Gili T’s sea border couldn’t put minds at rest at the start of the pandemic. Everyone split into smaller groups and went into hiding for a fortnight. This already-eerily quiet island became a ghost town, with one designated person from each quarantine group leaving their accommodation every so often to go to the store and buy food.

At this point, we went into emergency mode, taking large amounts of cash out from the ATMs in case they ran out, stocking up on instant noodles in case we couldn’t access food supplies from Lombok, and spending at least a few moments each day wondering whether we’d all made the wrong decision to stay put.

Relaxing in paradise was relatively easy, as long as I didn’t think too hard about the lack of hospital, doctors, or other emergency supplies within easy distance.

After a 14-day quarantine period, which ensured the island was entirely free from COVID, lockdown restrictions were loosened and life continued in a new sort of normal. Slowly, Gili T’s lively spark began to flicker.

Relaxing in paradise was relatively easy, as long as I didn’t think too hard about the lack of hospital, doctors, or other emergency supplies within easy distance. So, of course, this was around the time I caught dengue fever.

One mosquito bite turned into multiple mosquito bites that turned into a disease that struck me down within 30 minutes of feeling a slight headache. And I wasn’t the only one. No amount of DEET could stop resident after resident on Gili T from dropping like, well, flies.

At its best, dengue fever promises achy bones, a fever, rash, and a general feeling of malaise. At its worst, it requires hospitalization from dengue hemorrhagic fever where your blood leaks from your veins. A night of hallucinating and being too weak to do more than crawl on the floor to get a glass of water for 45 minutes placed me somewhere in the middle.

The fear of a trip to the nearest hospital—which required catching a horse and cart to the harbor, a private speedboat to Lombok, and a two-hour drive—was definitely a bigger fear than COVID. And that was while keeping in mind that, if I did need to leave the island, there was a high chance I wouldn’t be able to re-enter, back to my community of new-friends-turned-family.

Dengue passed, along with day-after-day of this newly relaxed pace of life. People cautiously started socializing, first by popping over for socially-distanced drinks before relaxing and finally hanging out as normal. Well, as “normal” as an island that usually greets as many as 1,200 tourists per day can be when reduced to a tiny group of long-term residents.

Safe from tourists and the fear of catching COVID, the island became a private playground.

While the rest of the world was staying home, we had relative freedom. Safe from tourists and the fear of catching COVID, the island became a private playground. Days were spent scuba diving and hanging out with the turtles who dared to come closer thanks to the lack of boat traffic.

Empty white sand beaches and a deserted main street became my daily view. Cycling around the island and watching the waves crash against the boat-free ocean was a stress-relieving, cardio-inducing workout that simultaneously chilled me out and eased my stress levels.

Month after month passed on Gili T and I settled into an easy routine. A weekly schedule of ever-changing parties swapped for a fortnightly socially-distanced bingo game. The island’s most popular restaurants and exclusive hotels quietly became local hangout spots for never-ending card games between friends. The horses and carts that could previously be heard clip-clopping in the background dropping tourists around the island lazily grazed on grass, enjoying an accidental school holiday from their daily duties. 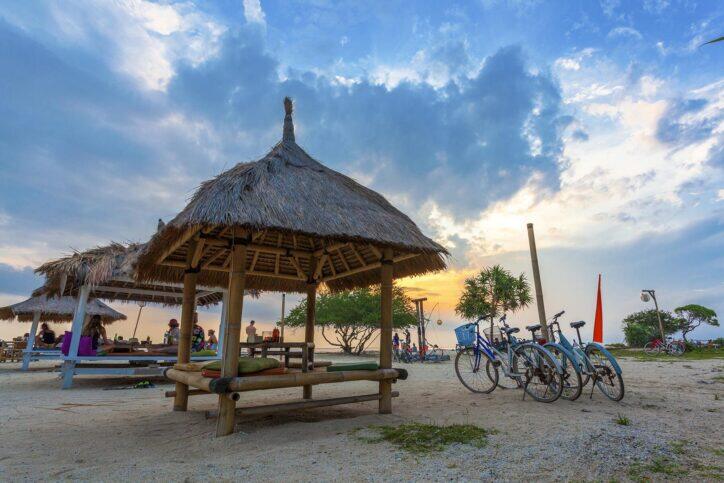 Those who’d been living on the island for a few years weren’t hugely phased by a lack of tourists to begin with. Because Gili T is used to disaster. When a series of huge earthquakes struck Lombok in 2018 and the surrounding islands were plunged into darkness with no electricity or running water, the island clubbed together every evening, using up whatever food was going off and splitting into groups to make sure anyone who needed help could access it.

What no one took into consideration was the prospect that this time around, those tourists who left so quickly a year ago would be yet to return. While the earthquake brought Gili T to a halt within a matter of hours, it promised a return of normality a month later. This time around, the island is still waiting for life to go back to normal.

And no one knows when that will be. Although domestic travel is now allowed with a negative COVID test and some tightly-enforced social distancing requirements, the Indonesian border is yet to reopen. As time has passed, more and more businesses on Gili T have temporarily closed.

Those that remain open are making the best of a bad situation for domestic tourists: offering upgraded rooms, cheap bicycle rental, and low-price excursions to prove that Gili T is still a magical place to be. With true Gili Trawangan spirit, optimism remains with open arms for when tourists are finally allowed back.