From a 1,000-pillar temple with no two carved the same, to a temple atop a hill offering sensational views, you’ll want to visit these 13 Jain temples in India that are architectural marvels.

Despite comprising less than one percent of the population, Jainism is one of the oldest religions in India. It emerged in its current version from the teachings of 24 Tirthankaras (spiritual teachers), of whom Rishabhanatha (also known as Adinatha) was the first and Mahavira (also known as Vardhamana) was the last and most prominent. The fundamental principles that the followers of the Jain faith live by are straightforward: forgiveness, non-violence, and a lack of greed.

India is home to many Jain temples that provide a lens not only into the religion and beliefs that people of this faith follow but also into their different architectural styles. Here are some of the most awe-inspiring.

INSIDER TIPAll leather articles (including belts, wallets, and shoes) must be removed before entering conforming to the Jain dogma of non-violence, including not killing animals. 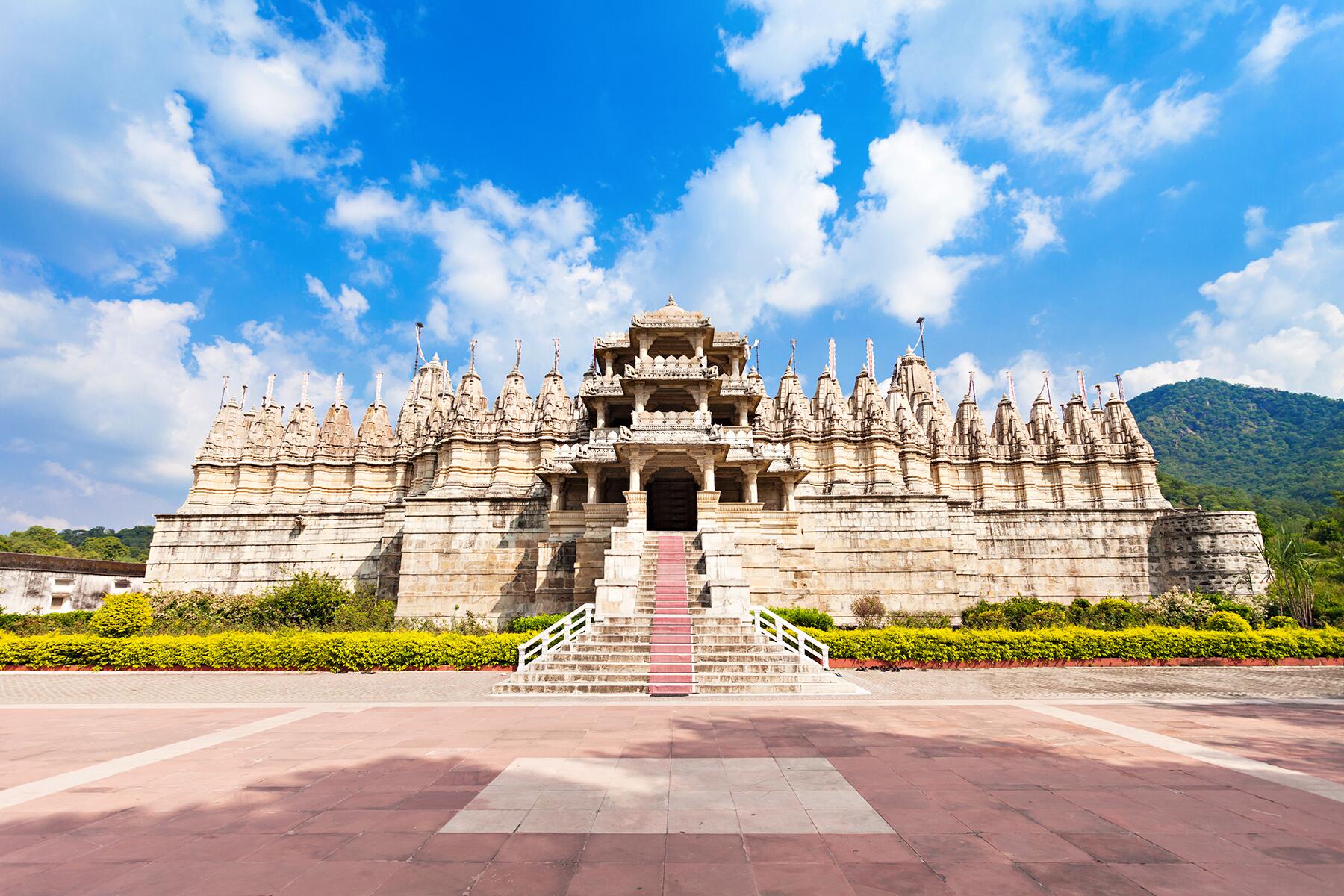 Built in honor of the first Tirthankara, the Ranakpur Jain Temple dates back to the 15th century. The three-story structure is made of marble, decorated with sculptures, geometric and floral patterns, scroll art, and Jain scriptures. While the entire temple warrants full attention, there’s one thing that visitors should particularly focus on: the 1,444 ornately-carved pillars. No two are carved the same and they take on different shades every hour as the day advances.

INSIDER TIPCheck out the carving of Lord Parshvanath, which has a 1,008-headed snake wrapped around it. 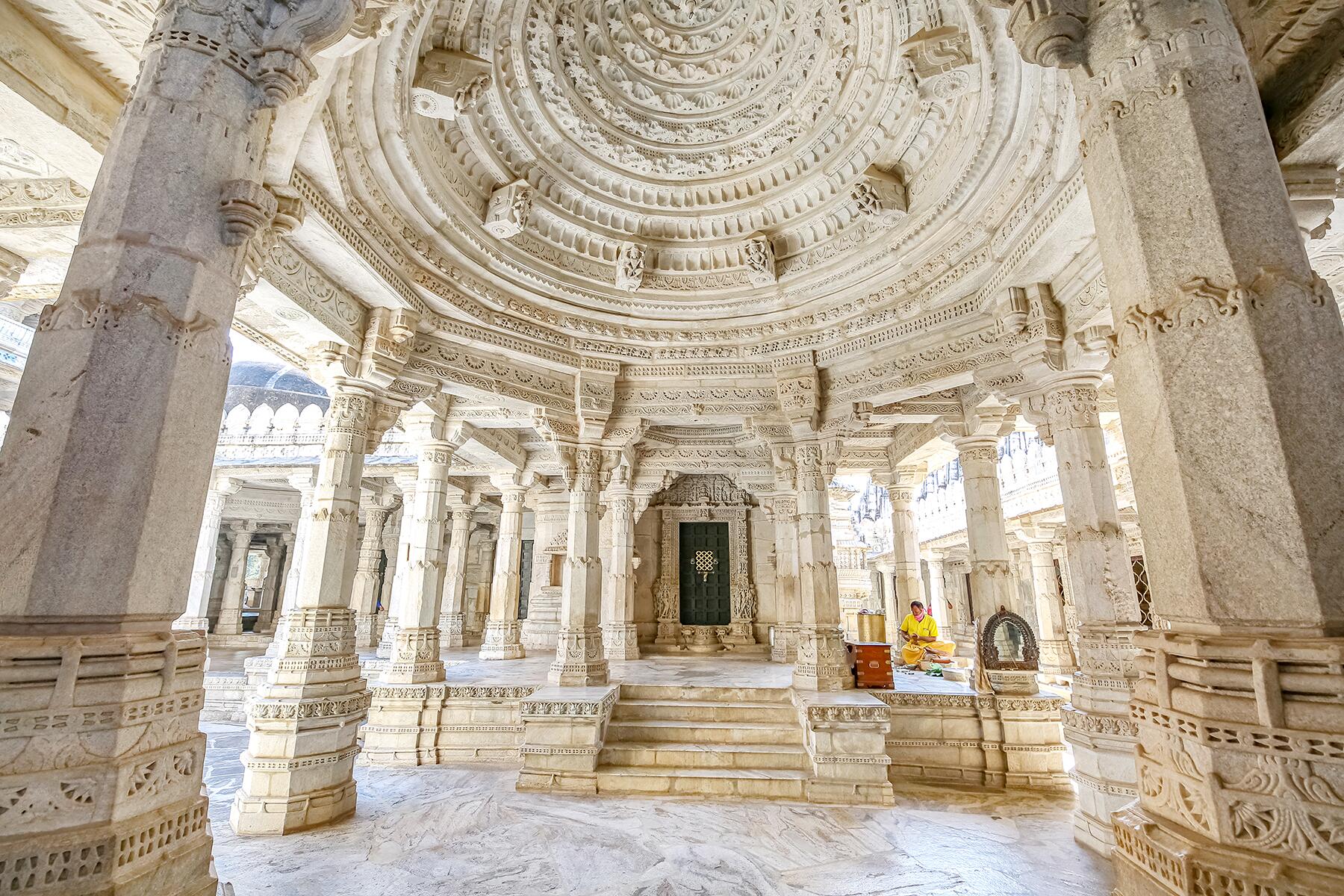 Dating from the 11th through 13th centuries, the Dilwara Temples is a complex of five individual buildings with idols of different Jain saints. Of the five, the Vimal Vasahi and Luna Vasahi temples are the more architecturally striking, particularly inside. Carvings of human and animal figures, sculpted elephants, and engravings depicting scenes from Jain mythology abound at the Vimal Vasahi Temple, while the Luna Vasahi Temple has intricate marble carvings of divine beings. But as you explore the amazing complex, don’t forget to leave a few minutes to admire the scenic nature surrounding it. 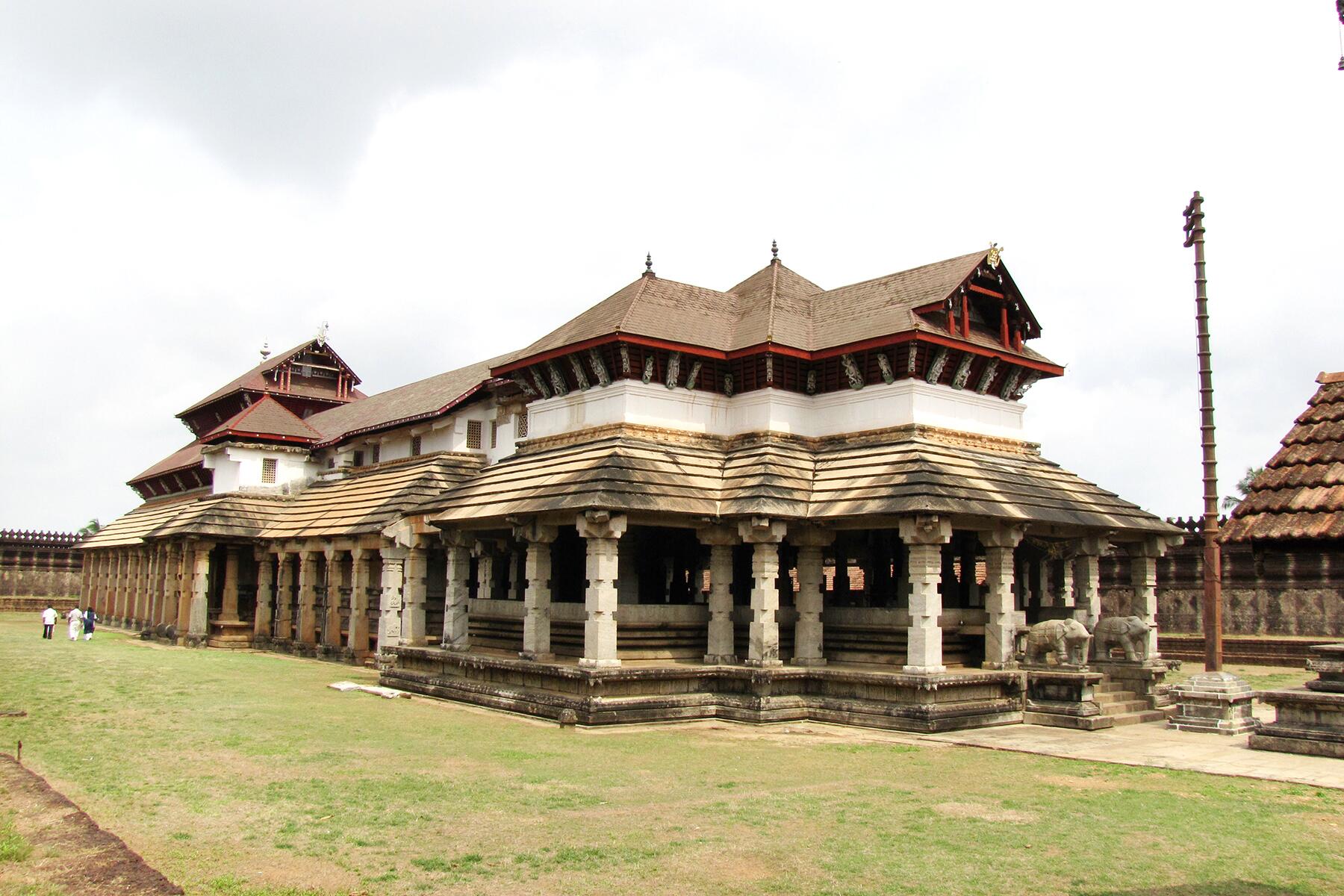 This three-story basadi (temple), constructed in the 15th century, then extended in the 20th century, has a staggering number of beautifully-carved pillars lining its halls and no two are the same. In fact, the 1,000 pillars found in the halls have earned the temple its very apt nickname: Thousand Pillar Temple. Other architectural standouts include stone chandeliers, sculptures of giraffes, horses, dragons, and yalis carved on the pillars, an 8-feet tall bronze statue of Chandraprabha (the eighth Tirthankara) in the inner sanctum, and a 50-feet tall metal flagstaff, or manasthamba, at the entrance. Visitors are allowed to visit only the lower level, not the upper floors.

INSIDER TIPThere are 17 more Jain temples in Moodabidri town that you should take the time to see as well. 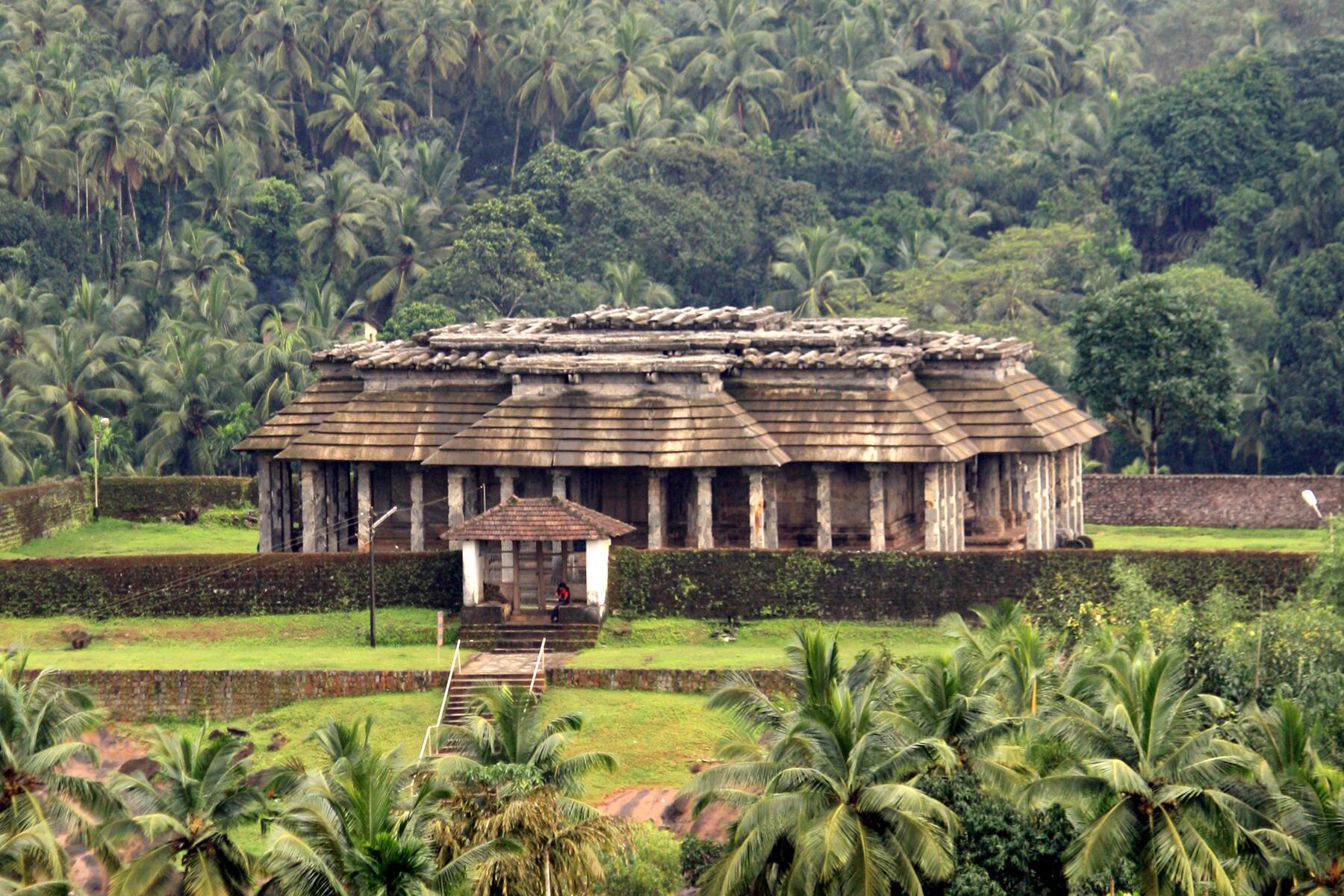 While the 16th-century Chaturmukha Basadi, or four-faced temple, contains everything a traditional Jain temple would (such as a hall with carved pillars and images of Tirthankaras), the layout is more unusual. Built on a hillock and made of granite using an interlocking technique, the temple is a four-sided building with identical gates so that the idols in the temple can be seen from all four directions. The temple is symmetrical, which is part of why it’s so beautiful to look at and photograph.

INSIDER TIPMake sure to see the bas-relief designs on the gates, and the 40-feet high monolithic statue of Lord Bahubali, also known as Gommateshwara, located at a walking distance from the temple. 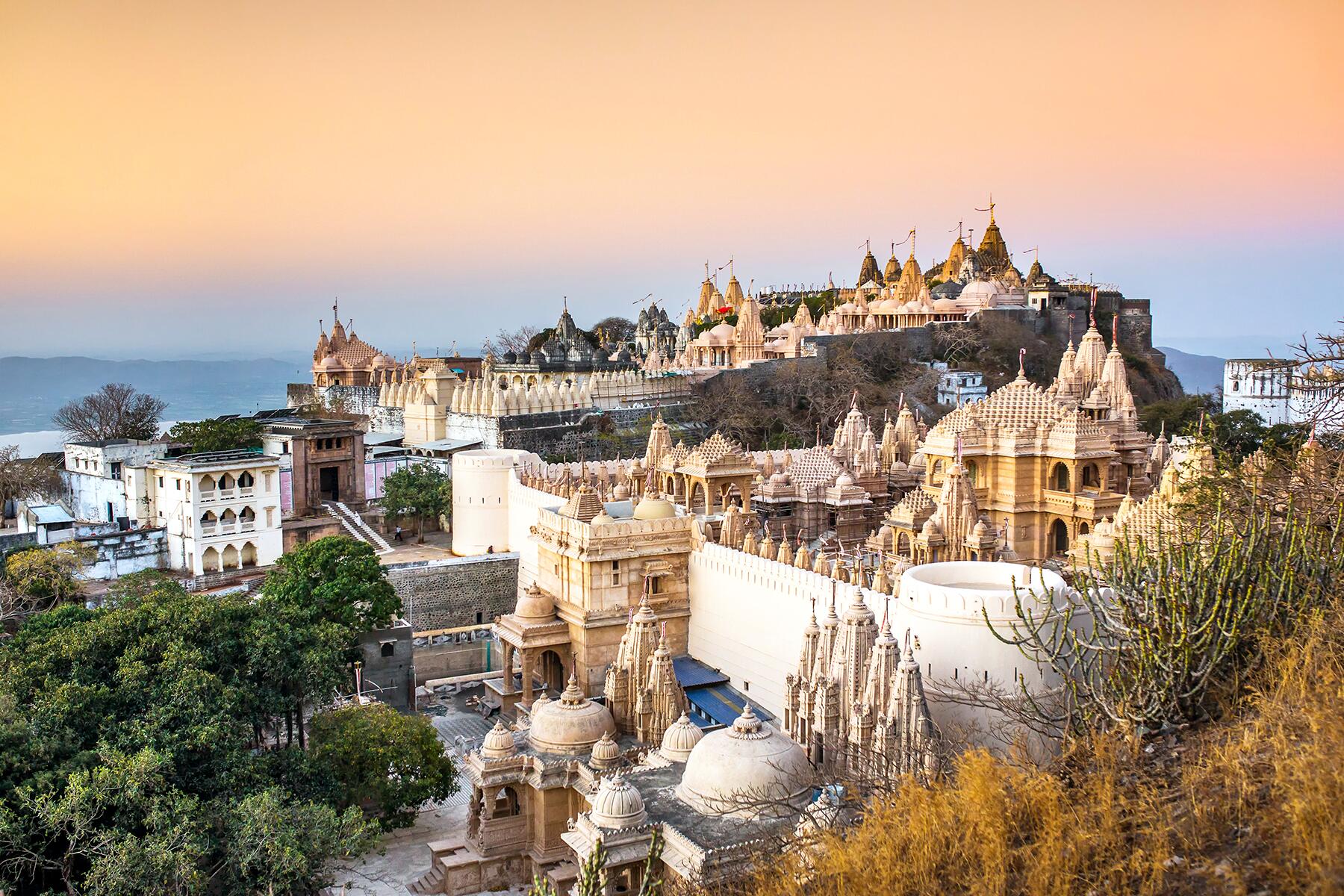 Among India’s largest temples, Palitana is a gargantuan temple complex erected atop Shatrunjaya Hills. It contains over 860 marble-carved Jain temples and more are being constructed. The entire site is extremely impressive, but pay particular attention to the Adinath temple. It is the main temple, as well as the most detailed, emblazoned with ornamental motifs and friezes, and even has a marble statue of Adinatha adorned with gold and precious jewels. You’ll break a sweat visiting, but the 3,500-steps climb is worth it (the views as you ascend are splendid); dholis (chairs) carried by porters are also available for those who can’t walk to the top. Take note: No one is allowed to stay overnight as it is a sacred site and it remains closed during the monsoon season.

INSIDER TIPThe temples are grouped into enclosures (tuks), so make sure to visit them all (there are nine tuks). 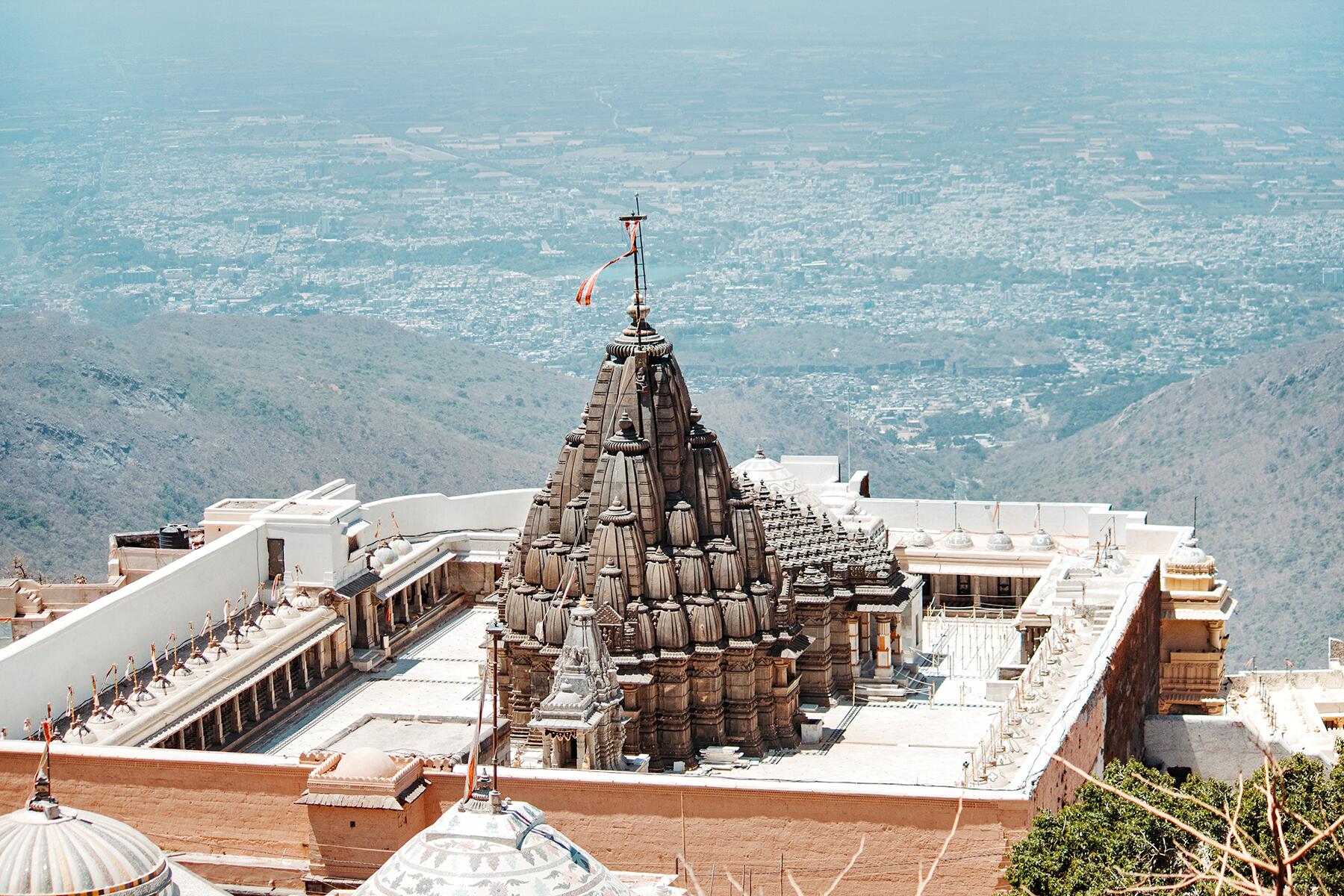 In the Junagadh district of Gujarat lies the holy hill of Girnar, at an elevation of 3,507 feet. About two-thirds of the way up is a huddle of Jain temples. It’s no easy trek, but once you’re there, you’ll get to tour the complex that includes 16 temples. While records show that the hill was a place of pilgrimage as far back as the 3rd century B.C., the existing Jain temples date only from the 12th century. The grandest and oldest temple is dedicated to Jain’s 22nd tirthankara, Neminath, who is believed to have gained enlightenment here. It is decorated in marble, features carved ceilings and granite pillars, and houses a black idol of the temple’s namesake sitting in lotus pose with a conch in hand.

INSIDER TIPDon’t forget to visit the Hindu temples located further up the hill. Of particular note are Ambika Mata temple and the Gaumukh shrine. 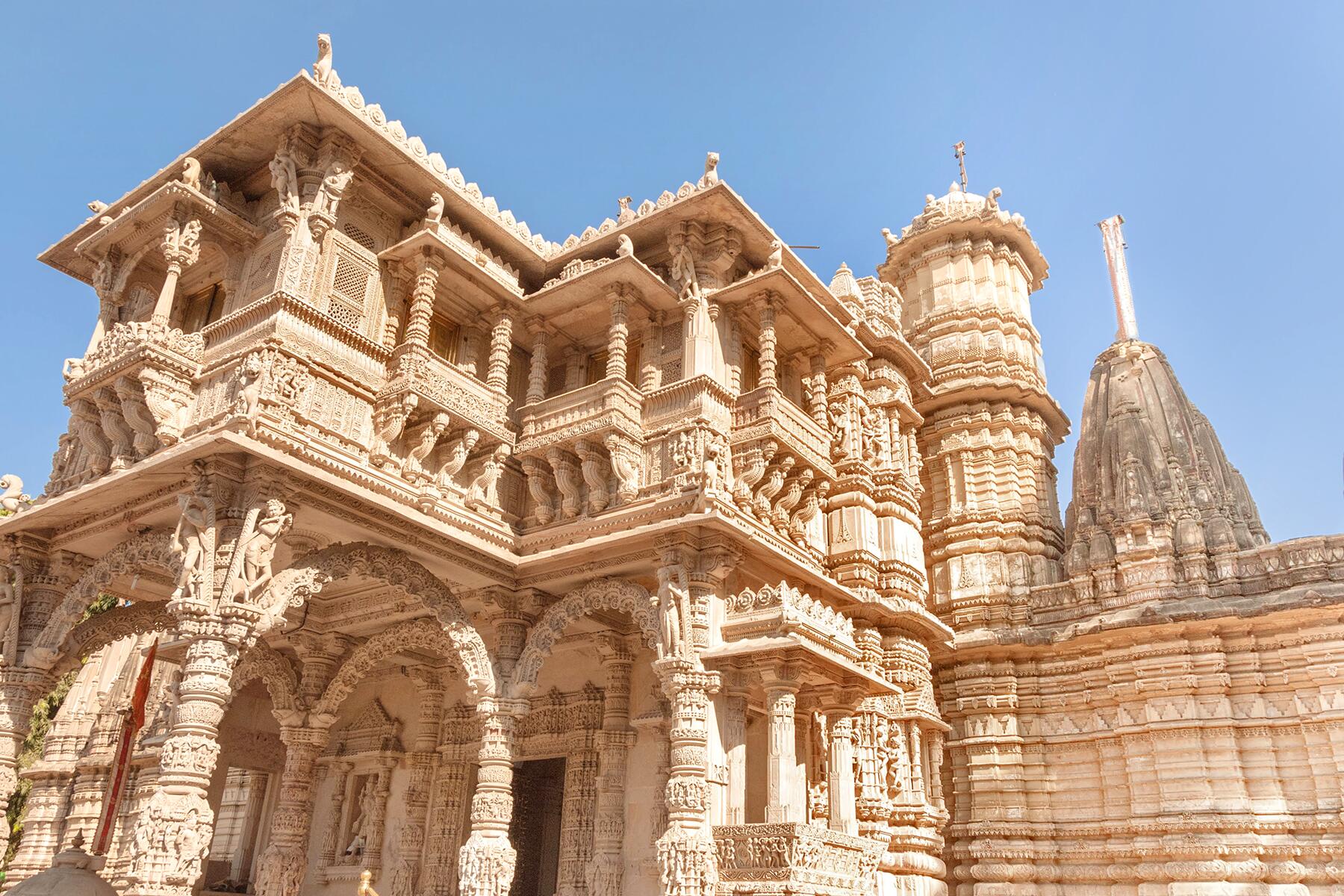 This 15th-century temple, dedicated to Dharmanatha (the 15th Jain saint), is one the most visually striking religious edifices in Gujarat. It houses a two-story temple in the center, surrounded by several miniature shrines, each featuring stunning architecture—think finely-carved pillars, ornate porches, and elaborate decorations. Also noteworthy is a six-story tall tower called Manasthambha, or the “Column of Honor,” found on the temple grounds. It has ornamental motifs reminiscent of the ones in minarets built in the Mughal era. The temple entrance has pretty balconies enclosed by a latticed screen, adding to its overall appeal. 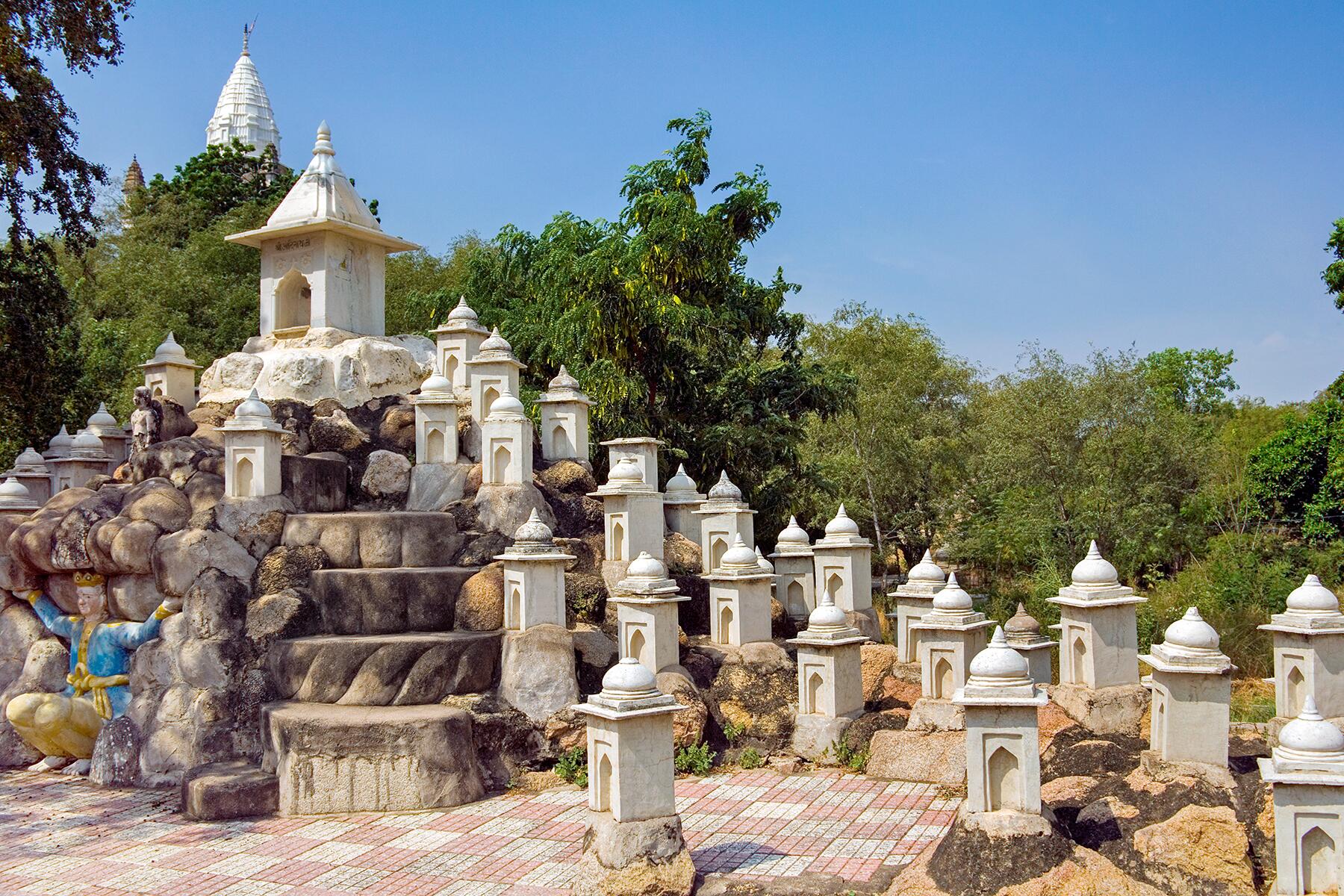 The crowning glory of the Datia District in north-central Madhya Pradesh, Sonagiri is home to more than 100 Jain temples. About 77 of them are found in the hills around Sonagiri, while the remainder is set in a village. Painted white and bedecked with tall spires, the exterior of the temples is simple yet grand. Among the most famous and oldest of these is number 57, which dates back to the 9th century. Nestled on a hill, it houses an 11-foot tall rock-cut statue of Tirthankara Chandraprabha in a meditating pose. An unmissable towering pillar, known as “Column of Dignity,” stands about 43-feet high outside it. The temple can be reached via a picturesque trek of 300 steps and you’ll likely pass Digambara sect Jain monks on the way.

INSIDER TIPYou’re required to walk to the temples without shoes and socks, so avoid visiting in summer as the path gets hot and makes it difficult to walk barefoot. 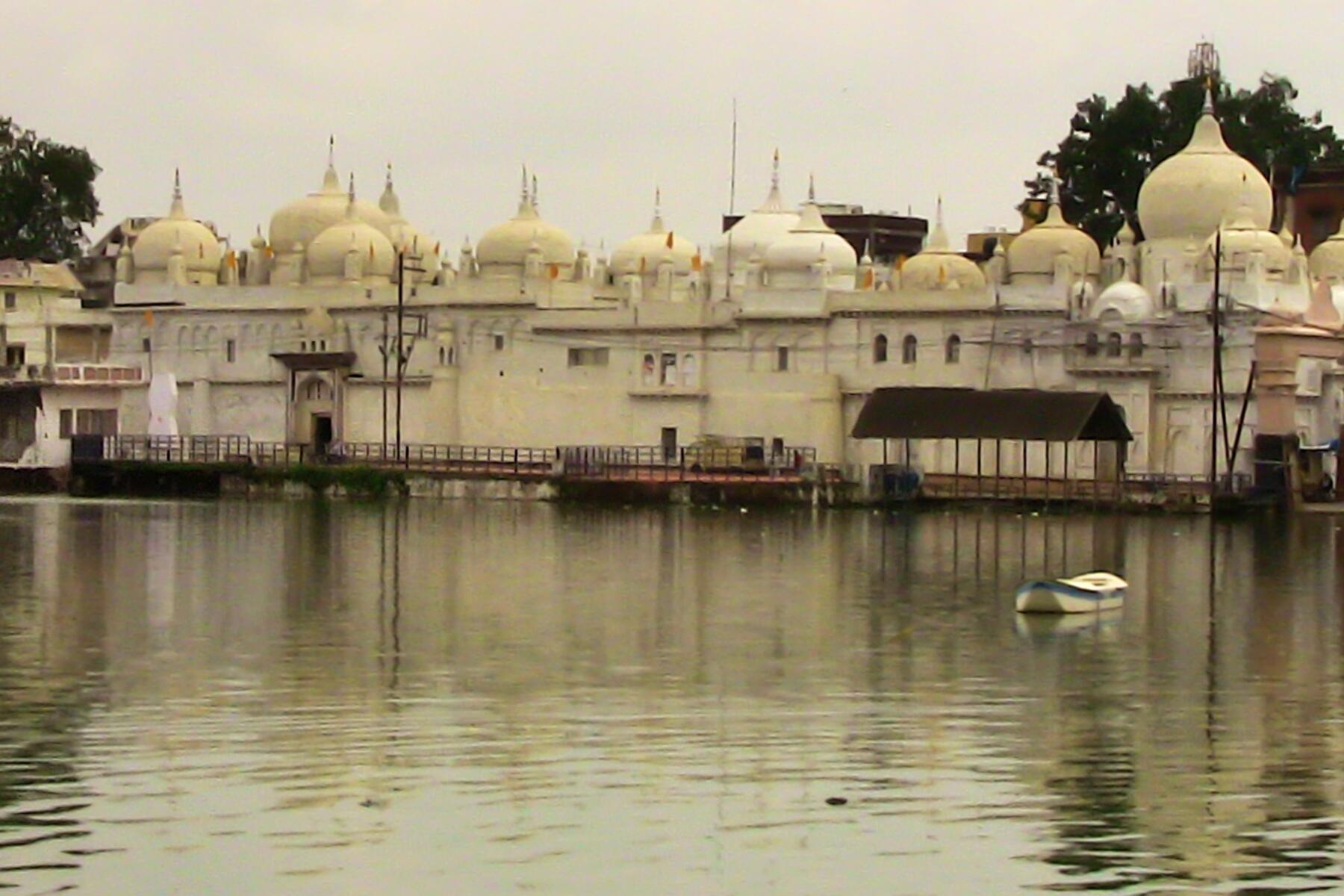 Perched along the shores of Lake Hanuman Tal, the pristine white temple is worth a visit just for its spectacular architecture dominated by lofty shikharas (spires). However, the real treasure lies inside and includes 22 shrines that have ornately-crafted images of various Jain deities from as far back as the 10th century. The shrine of Jain goddess Padmavati is particularly noteworthy for its glasswork. 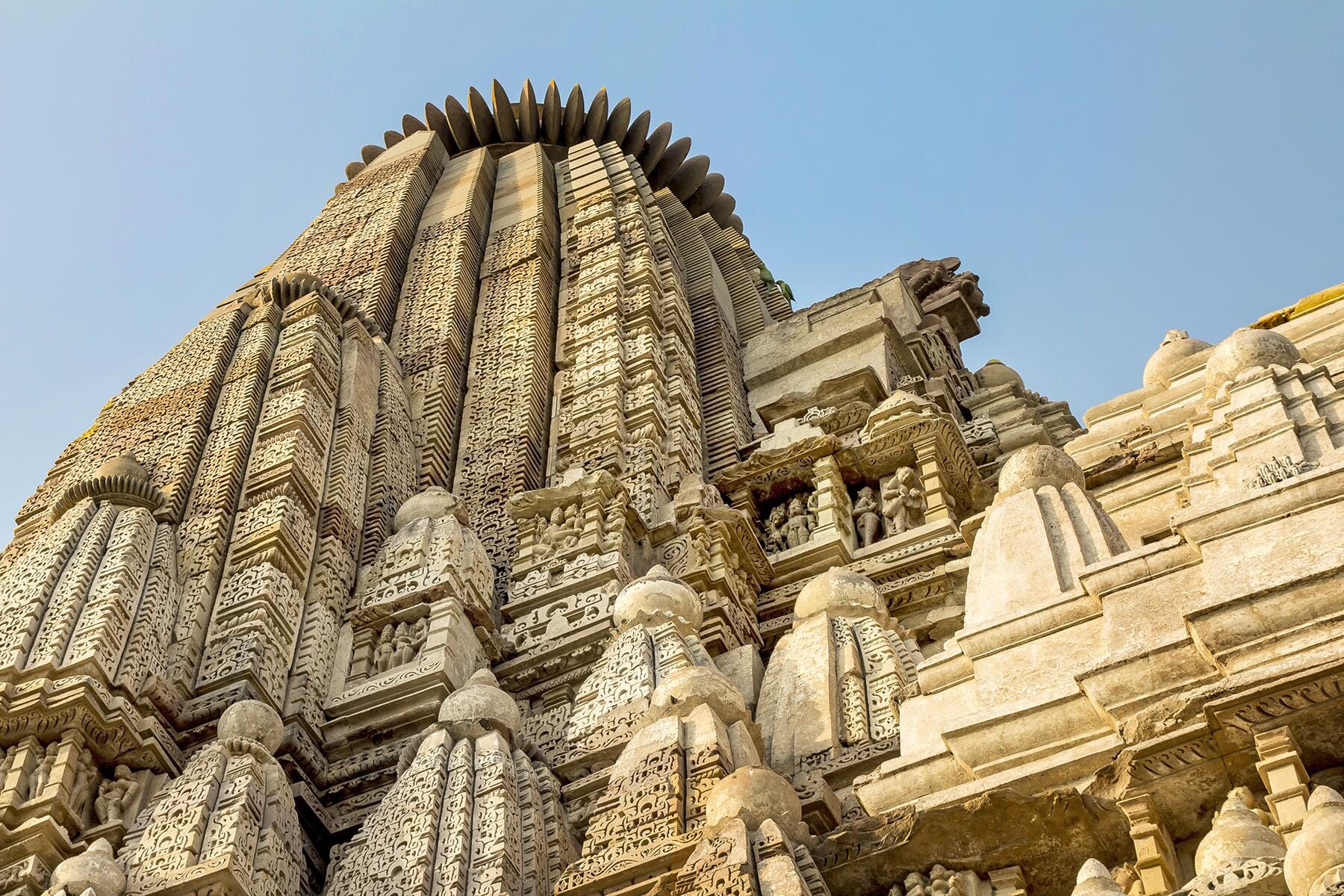 Part of the expansive Khajuraho Group of Monuments, the Parshvanatha Temple is among the largest structures on the complex. Not a square inch of the temple, from the facade to the sanctum sanctorum, has been left uncarved. The outer walls are adorned with intricate sculptures depicting hybrid mythical animals, musicians, dancers, celestial nymphs, as well as Hindu divinities, while the inner walls are plastered with plenty of supernatural beings, floral designs, and relief sculptures. The inner sanctum of the temple contains an idol of Parshvanatha (the 23rd Jain tirthankara) and at the back of the temple is the idol of Adinatha. 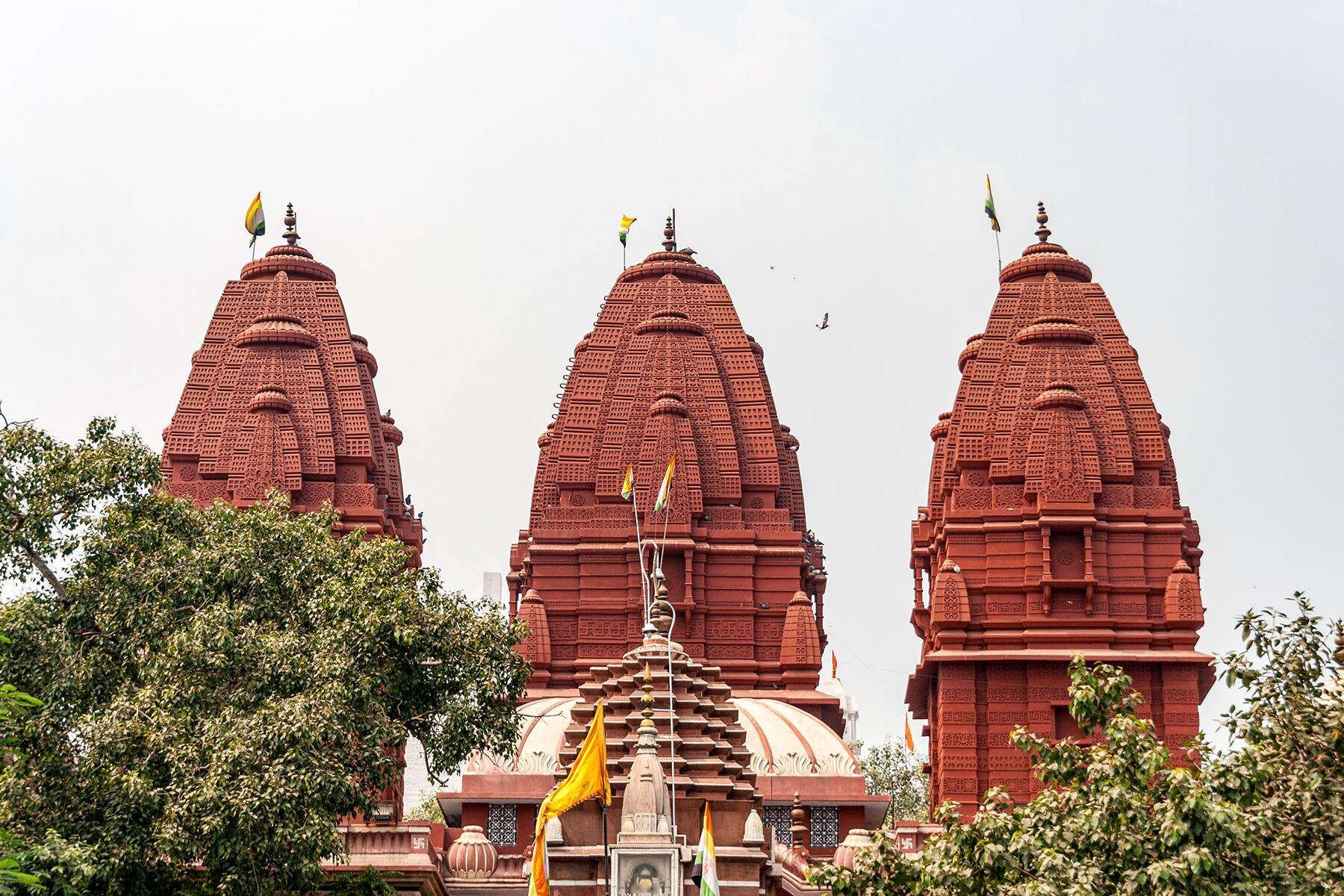 One of Chandi Chowk’s most striking sights is the Shri Digambar Jain Lal Mandir, or the Red Temple—a spot of serenity in the busy area chock-a-block with street hawkers, cycle-rickshaws, bullock carts, flower sellers, and food shops. A key feature of this two-story temple is its main area of worship located on the first floor. It is covered with gilded artwork and colorful frescoes, and contains a statue of Lord Mahavira, along with figures of other Jain deities (photography is prohibited inside). 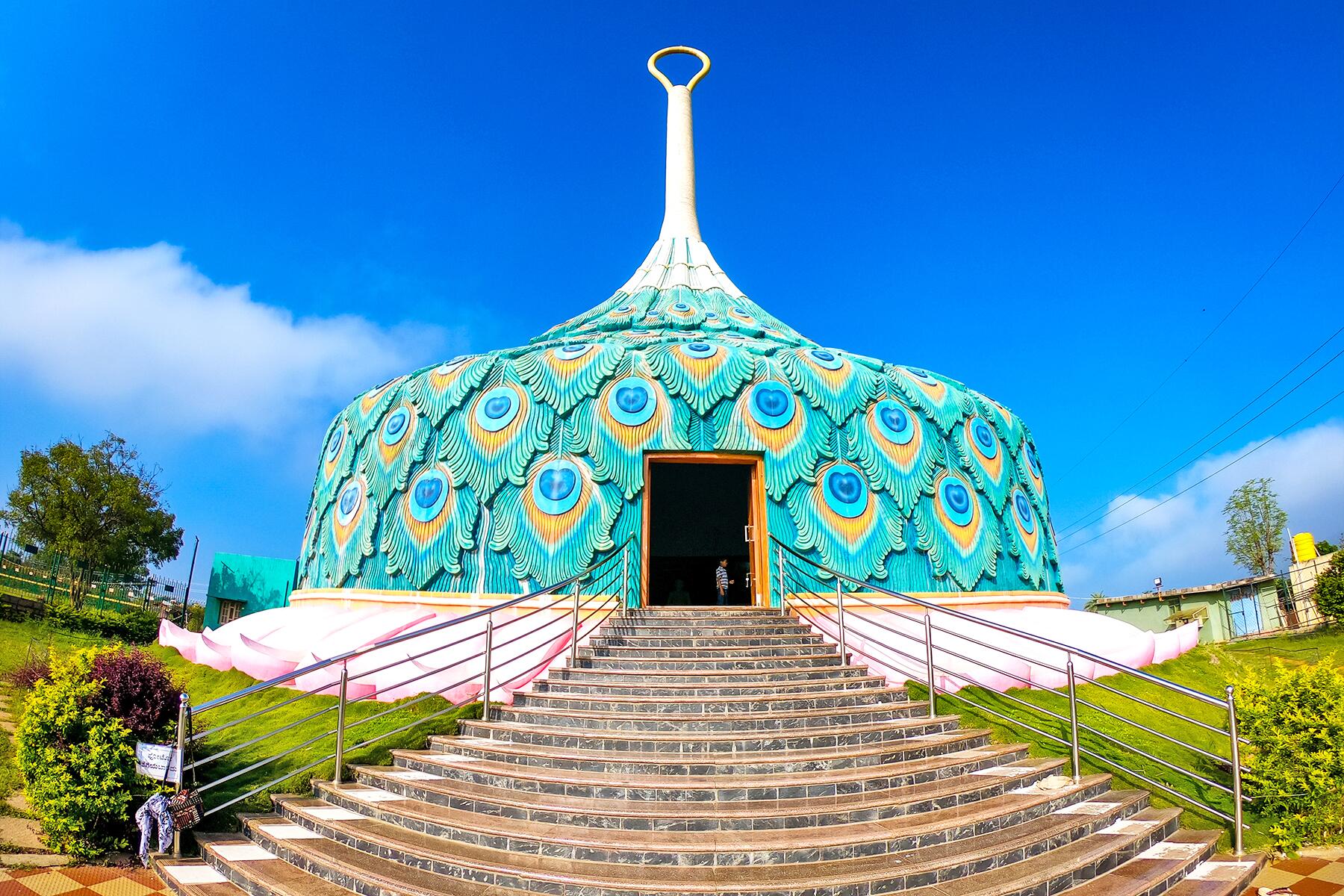 Mandaragiri Hill, commonly known as Basadi Betta, is hardly a household name, but if the hill just 39 miles from Bangalore is to become famous for anything, it’ll be for its Jain temples dating from the 12th century to the present day. The most beautiful among them is the 81-foot tall peacock temple located at the foot of the hill. The Peacock Temple’s exterior is adorned with peacock feather fan (called pinchi) motifs, hence its moniker (its official name is Guru Mandir). Inside, there is a statue of Shri Shantisagar (a saint of the Digambara school of Jainism) and colorful paintings on the walls depict his life. Also, worth admiring nearby is the statue of Chandranatha Tirthankara and the lake that is the Mydala Kere at the back side of the temple.

INSIDER TIPClimb up the hill (some 435 steps) for the stunning views of the area and take a tour of the four shrines located on the top (make sure to take the keys of the shrines from the caretaker who sits at the base of the hill). 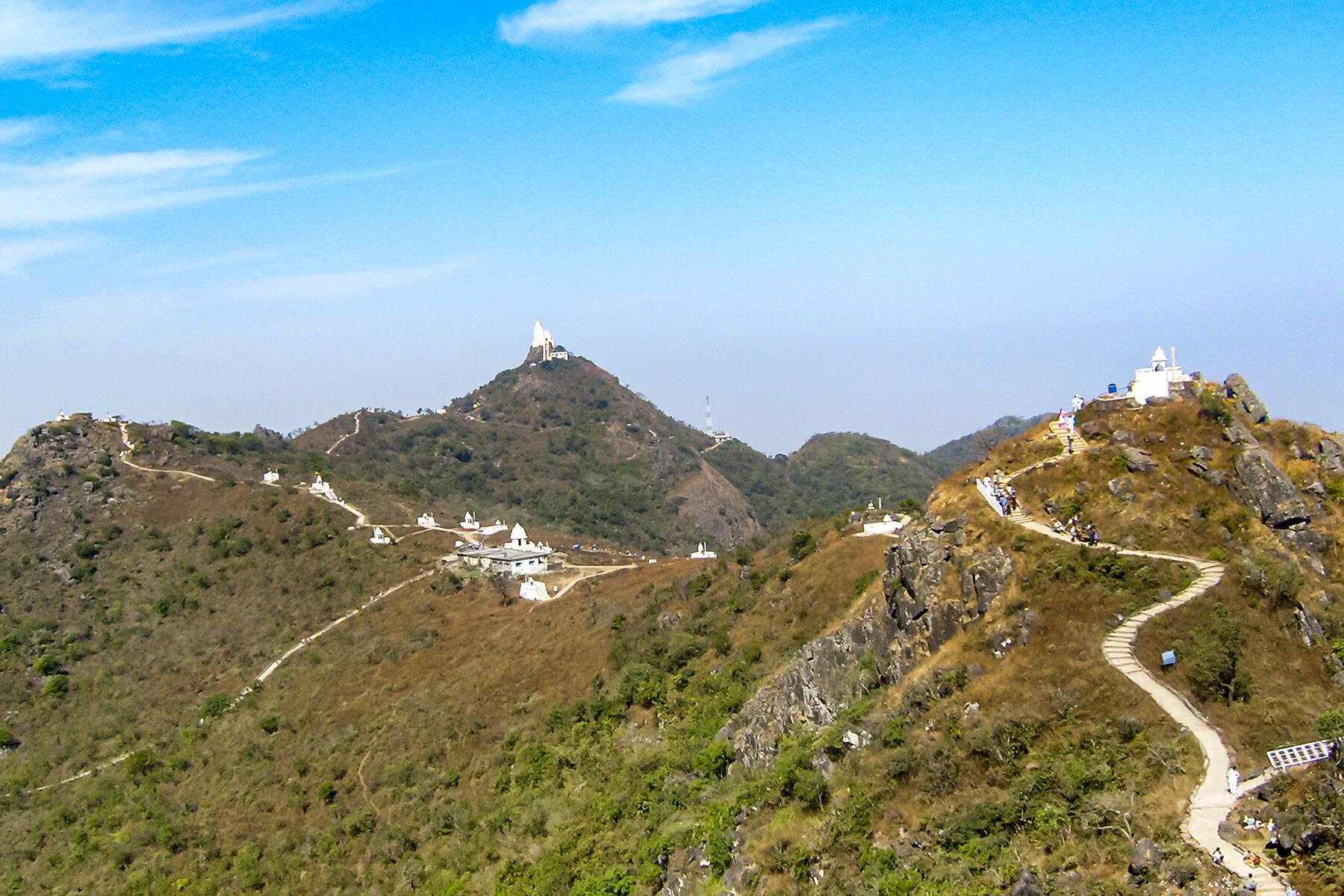 Shikharji isn’t just a temple—it’s one of the best views in the eastern Indian state of Jharkhand. Perched atop a 4,490-feet peak called Parasnath Hill, it offers a spectacular view of the surrounding mountains and verdant forests. The temple itself is famous for its beautiful murals on the wall that depict the basic principles of Jainism, and the ancient inscriptions written in Sanskrit on the pedestal of the statue of Lord Parshvanath. The hill also has many smaller marble shrines called tonks, dedicated to the 20 tirthankaras who are said to have attained moksha (liberation) here. The trek to the temple site is a long one—a round trip of nearly 18 miles. If you can’t face the walk, palanquins are available at the foot of the hill.

INSIDER TIPBefore starting the trek, make sure to visit the Bhomiyaji Temple found at the foothill. It is believed that Shri Bhomiyaji Maharaj is the protector deity of Shikharji.

The photo (11of 13) of the digambar jain lal mandir in delhi is wrong. Photo is of another temple in delhi called birla mandir. Kindly make the change. thank you