Not far from Shanghai is Zhoushan Village, where about 10,000 people make their living from carving olive pits.

A sign that spells out “Olive Village” in Chinese welcomes visitors to this village in the western suburbs of Suzhou, a city about 50 miles west of Shanghai in eastern China. Over 100 workshops are devoted to this meticulous and exquisite ancient handicraft, the ultimate in micro-art. About 3,000 artisans carve tiny sculptures and jewelry from olive pits in the village near Taihu Lake in Suzhou’s Wuzhong District. The rest work in olive pit packaging, sales, and production.

Most of us don’t give a fruit pit a second thought. But for centuries, Suzhou was famous for its fruit-pit carvers, especially from the Ming Dynasty (1368-1644). Olive pits weren’t the only things carved: peach, plum, apricot, and cherry pits were too, not to mention lotus seeds, pine seeds, and walnut shells. The carvings could be curios, pendants hung from belts or fans, or strung together as bracelets or prayer beads, and a different scene sometimes appeared on each side. Noblemen and top government officials even wore them over their clothing during China’s last dynasty, the Qing Dynasty, which ended in 1911. 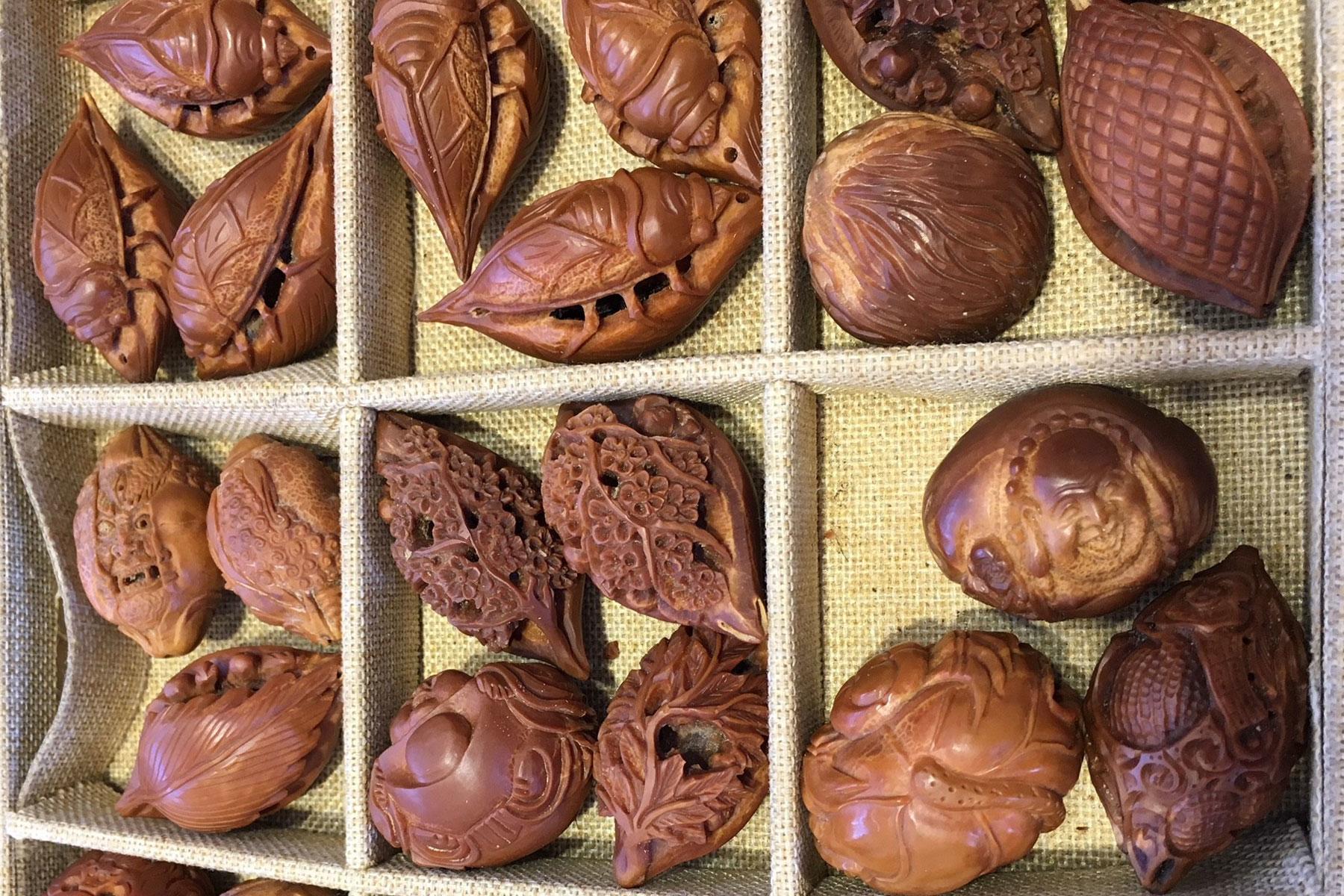 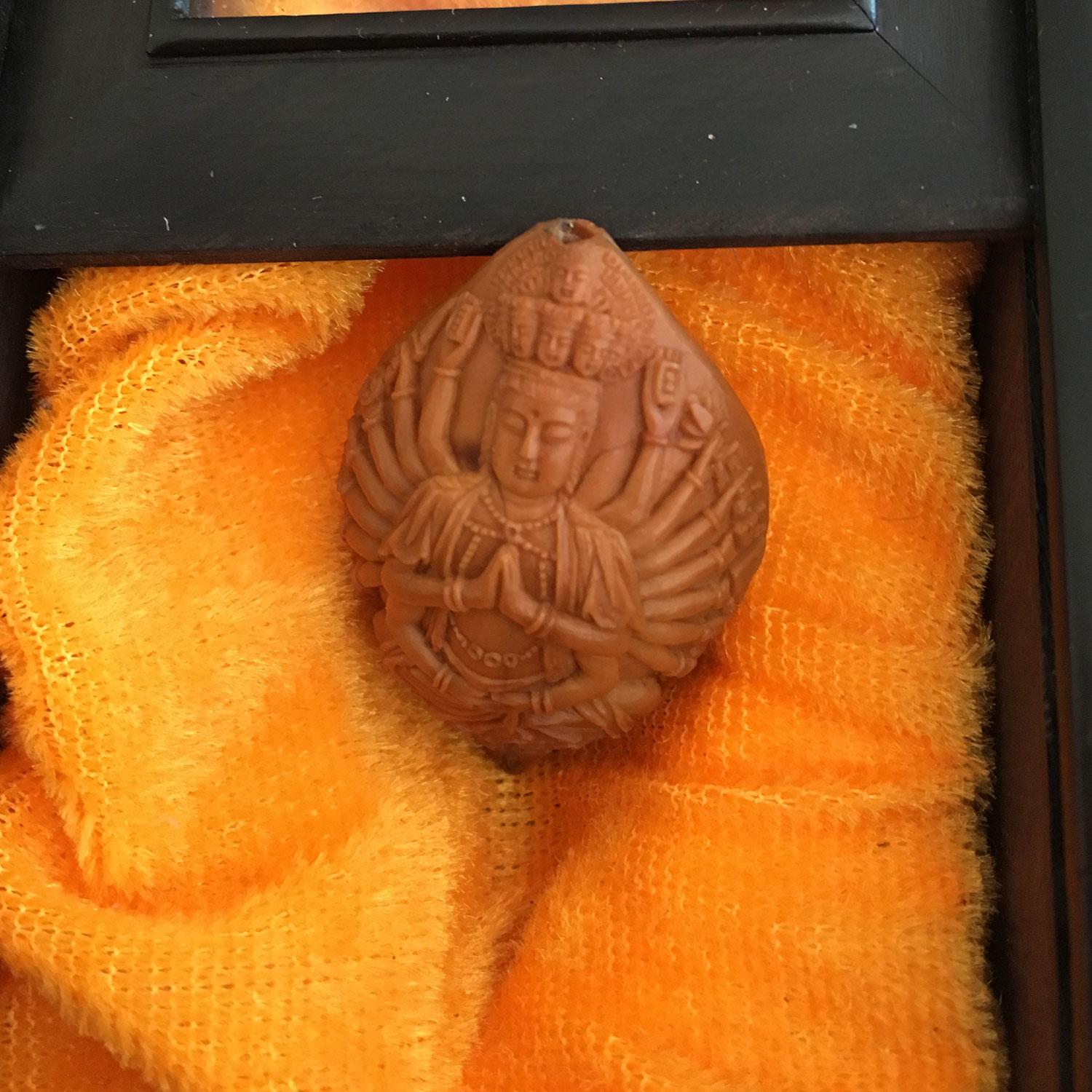 A city whose artisans seemingly never met a material they didn’t yearn to carve, Suzhou, a 2,500-year-old city where many traditional art forms thrived, is also renowned for carving sandalwood and jade, as well as ornate silk embroidery, where double-sided brocade features a different scene on each side. Boats are a very popular theme in carving fruit-pits, due to both their curved shapes and a famous 11th-century Chinese poem. But flowers, animals, human figures, themes from folklore, religion, and poetry, and written words are also common subjects in the peculiar craft, dubbed a National Intangible Cultural relic by China.

The most famous olive pit carving of all was created in 1737: a boat with eight human figures (three sitting inside a cabin, five standing outside), with windows and doors that opened and shut, masts and other equipment, plus, incredibly, lines of text from that poem, over 300 Chinese characters in all. Inspired by Ode of Red Cliff by Su Dongpo, where the poet describes his memorable boat ride, the masterpiece is a little over an inch long and a half-inch high. Once stored in the Imperial Palace in Beijing’s Forbidden City, designed by an artisan for the royal workshops, it’s currently in the National Palace Museum in Taipei, Taiwan.

But this ancient art is still a big deal today: One olive-pit carving by a Zhoushan Village artisan sold for 100,000 yuan (then about $16,000) at auction in 2014. Depicting a dragon amid the clouds on one side, and Buddha on the other, the artwork won the golden award at the China Beijing International Art and Crafts Fair. Artisan Song Shuiguan and his daughter took two months to make the piece. Shuiguan also won China’s top award for folk craftsmanship, the Mountain Flower award, in 2009 for another olive-pit carving, called “Braving Wind and Waves.”

The father-daughter duo isn’t the only family in the village where several members practice the craft. Master artist Zhong Nianfu learned the art when he was 13, and his two daughters, his son, his daughter-in-law and his granddaughter all followed in his footsteps in olive-pit art. Nianfu helped form the Zhoushan Carving Studio in 1968 and led it for years, during China’s Cultural Revolution, when many traditions were being smashed, and the Zhoushan Fruit Pit Carving Factory was formed in 1975. His son Zhong Yaoyan later directed the Wuxian Carving Studio in Suzhou.

The olive pits are from ganlan olives, mostly grown in Guangdong province in southern China, and also used in Chinese medicine. You can watch craftsmen at work with chisels and magnifying glasses in their studios in Zhoushan, but you don’t need to visit the village to find their work. Many shops in Suzhou and Shanghai sell olive-pit carvings. The most common themes depict the heads of arhats, people who have attained perfection in nirvana through Buddhism, and bracelets that string together over a dozen arhat heads are popular.