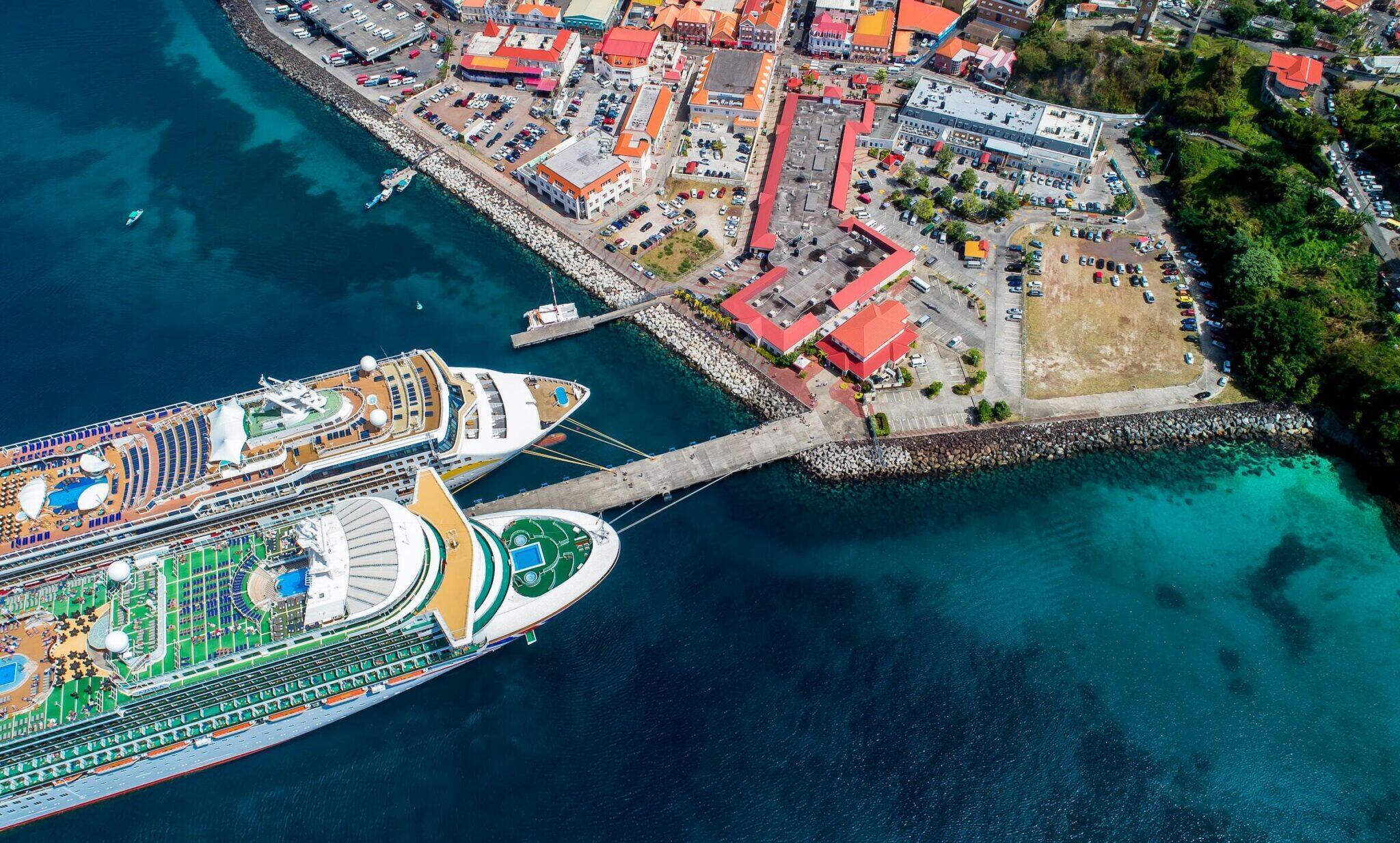 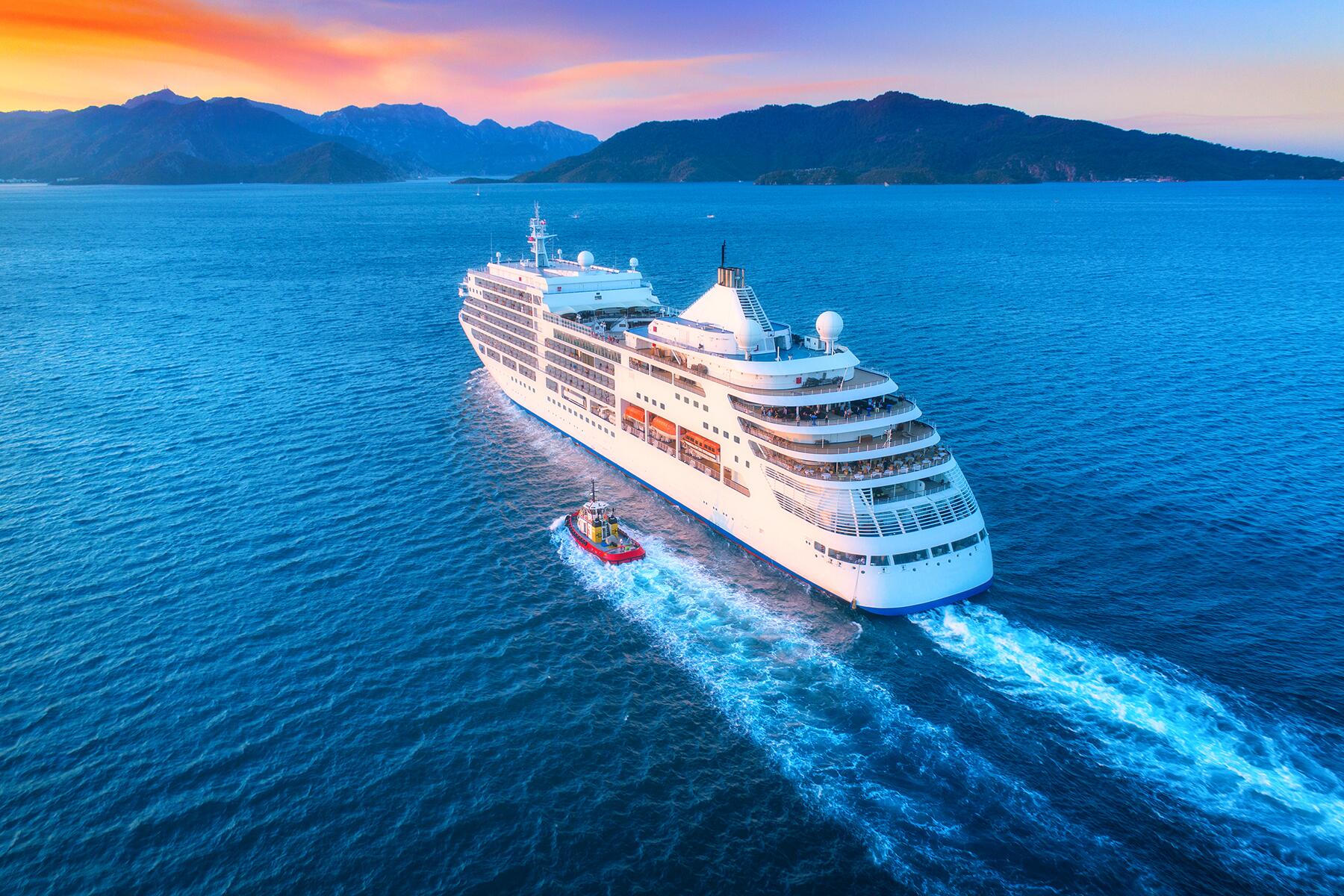 A guide to finding the gods.

n the beginning, there was Ra. He created life from nothing, forming an underworld, heaven, and earth, where he ruled from the sky. Ra is the first god you’ll meet on a trip to Egypt. He is the sun beating down to greet you, and you will encounter his full force.

To feel the ancient world so directly is one of the great joys of a trip to Egypt. A Nile cruise has a way of revealing myths and magic to you, port by port, where you can learn from Egyptologists who’ve dedicated their careers to learning about the mythology of ancient Egypt.

The journey starts in Cairo, “Umm al-Dunya” or “Mother of the World,” a sun-soaked dusty metropolis of bustling energy day and night. Here, people dart confidently across the street through dizzying traffic that seems to follow no order. You’ll catch your first glimpse of the Nile bisecting the city and feel starstruck. The second longest river in the world, one that flows north, it’s the lifeline of Egypt.

The first stop for many is the Egyptian Museum, from where it’s hard to fathom the modern world outside. In here, it’s 3,500 years ago. Mummies, statues, and artifacts laden with hieroglyphics depict the order of things.

Don’t fear Anubis, the god of mummification and death, who guards many tombs, his black jackal form frightening off unwanted creatures and grave robbers. He watches over the dead and does his job well—within the museum is a pair of 3,400-year-old mummies with hair and skin still intact.

And oh, what they must have gone through to proceed to the afterlife. The gods weighed their hearts on a golden scale against the feather of Maat, the goddess of truth. Only the gods know if their hearts were heavier than the feather.

Many people must have been confident of passing this test, though. On many of the tombs, some hieroglyphics indicate a menu of items the person required in the afterlife: perhaps two pieces of bread, meat, plus material objects like a wig, a mask. Once there, they would encounter Osiris, the god of the afterlife. Always depicted with green skin, he guides souls after death and renews life.

Maybe the best legends lie outside of the museum’s walls, not far from the city. The Pyramids of Giza, the last surviving wonder of the ancient world, hold their own secrets. They tell a story of two pharaohs in competition to build the largest temple. The brave can venture into the Great Pyramid to visit the final resting place of Khufu.

Down the road, the Great Sphinx sunbathes, waiting to tell a riddle you must answer correctly. Maybe the riddle is this: how could an ancient civilization engineer the sphinx and pyramids so precisely that all their planes align? How could they master architecture so early? It’s a mystery so puzzling you can’t help but wonder if the ancient Egyptians knew something the modern world does not. That’s all before you even step foot on a Nile cruise ship.

From Cairo, you head to Luxor, where many ships start their Nile journeys. Upon arrival, you’ll witness a miracle of sorts—acres of lush green fields of sugar cane, mangoes, and flowering bougainvillea line the banks of the Nile here, a trail of life where there would otherwise be dust. How could so much thrive in the Sahara? How could anyone? The rational answer is irrigation. But if you spend any time in Egypt, you know that Hapi, god of the Nile, has something to do with it.

Hapi brings the floods that deposit fertile soil on the banks, the reason for the vibrant crops. He appears on the base of columns of 3,000-year-old temples as a chubby figure with a big belly and breasts, a sign of the fertility he brings. He often holds papyrus, tying together upper and lower Egypt, proving that he is a life-giver.

One of the best ways to see Hapi’s work is on one of the land excursions you can take in Luxor: a hot air balloon ride. From the reaches of the balloon, you can see that Luxor is divided into two distinct sides, one half lush green and the other desert. Partaking in this adventure means greeting the god of night, Nut, by waking up at 3:30 am, waiting patiently for Ra to emerge in the morning.

After take-off, you level with Ra. You see what he must do each day as he travels across the sky in a sun boat before descending into the underworld at dusk. Floating over active excavations and feeling, for a moment, weightless, you’ll look over to the West bank of Luxor, the side of death. In all the desert, you can just make out some light structures surrounded by limestone mountains—this is the Valley of the Kings, where 64 tombs of pharaohs lie under the earth. It’s a place you’ll visit with the ship’s Egyptologist once you’re back on land. 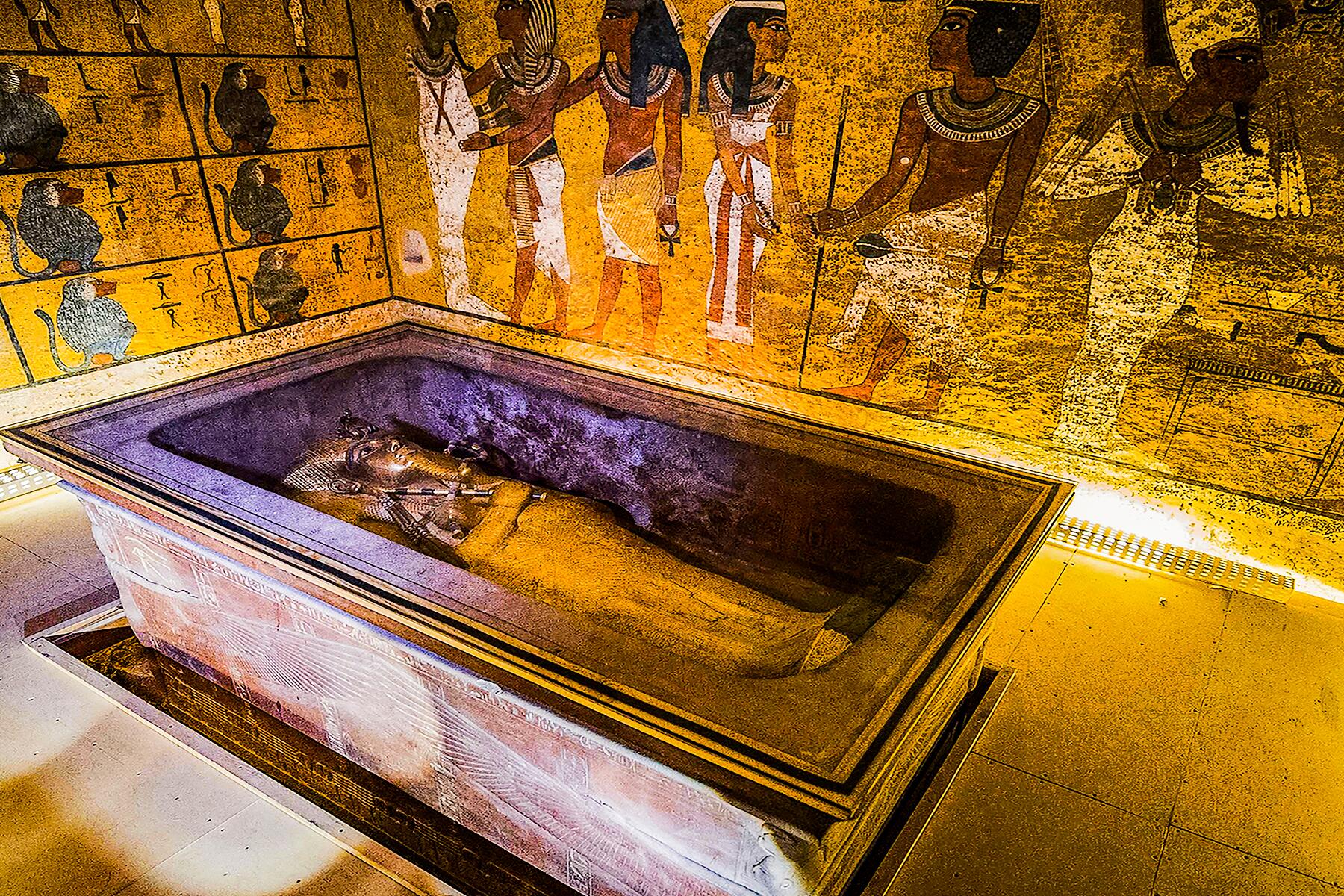 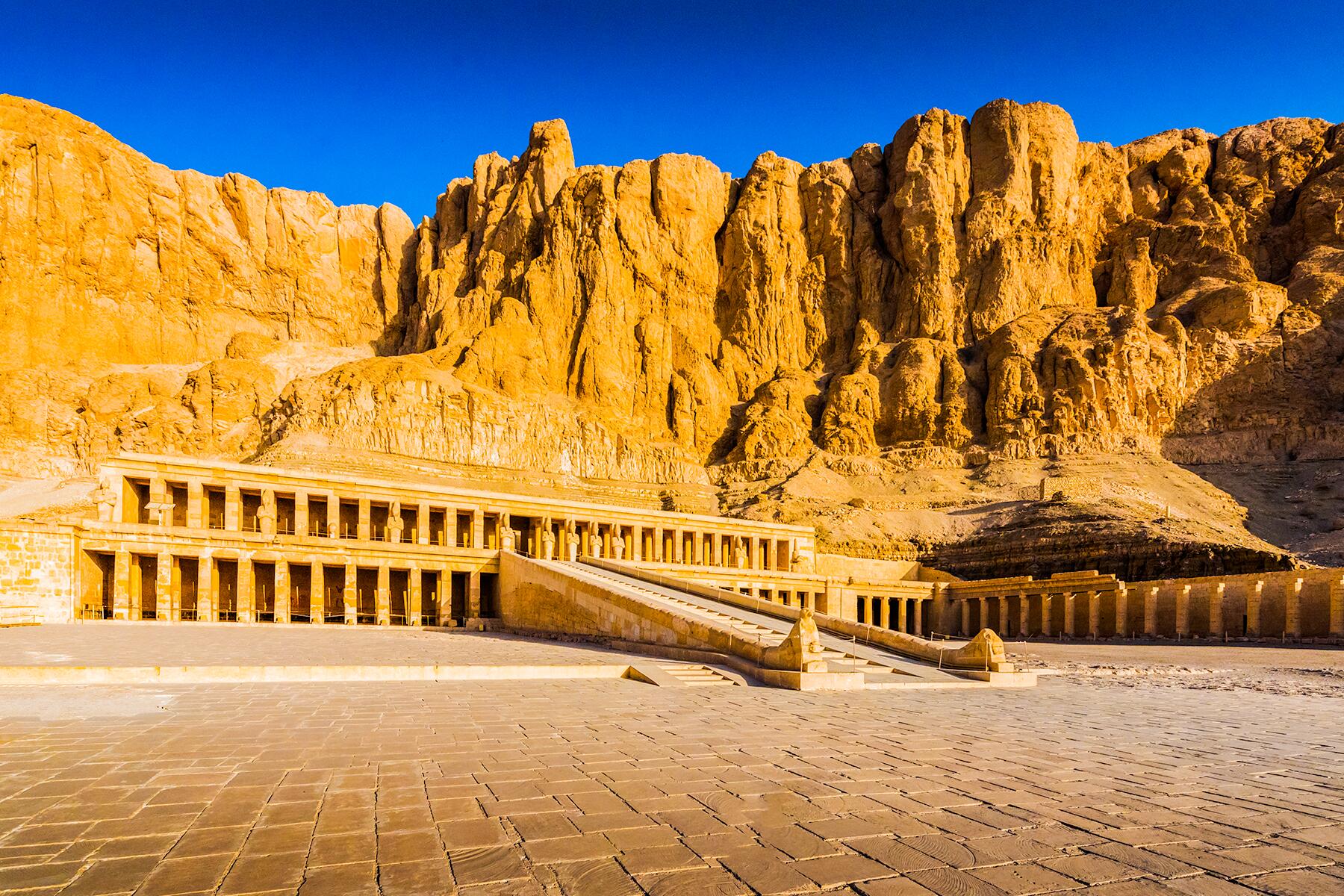 Inside the colorfully decorated tombs, the hieroglyphics and pictographs weave a story with now familiar characters told through symbols. The god Osiris appears in green; a high priestesses who always wore leopard skins and the scarab beetle, a sign of regeneration and rebirth. Since the preparation of a king’s tomb began at birth, some of the king’s tombs (such as Ramses II and Seti) are intricately decorated in colors so vibrant you won’t believe they are 3,000 years old.

Arguably the most famous of the pharaohs to find eternal rest here is King Tut, the boy king. Upon descending into his tomb, you’ll notice how blank it is—a sign that there was not much time to decorate before his death at only 18. Some speculate that the king was murdered by a trusted advisor, who bashed his skull, though others have theorized that he crashed into a chariot and broke his legs. You can take a look at his mummy and decide for yourself. Discuss it with your fellow passengers over dinner, relaxing in modern comforts on your cruise ship, and get ready to walk with the ancient world the next day.

Along the journey, you’ll also get the chance to marvel at Karnak, one of the largest temple complexes in the world, dedicated to Ra. In August, all 110 degrees will test your fortitude. Explore, too, the Dendara temple, where blue-painted ceilings depict some of the first zodiac signs recorded. Walking the halls, you can almost feel the energy of Hathor, the goddess of dance and music, to whom the temple is dedicated and what your Egyptologist may call the “world’s first disco.”

You’ll likely spot a cat running through the streets at your last stop in Esna. It may be Bastet, the goddess of protection and of women, saying, “safe travels.” This is the world that awaits you on a Nile cruise, and like Osiris, it will give you new life.