Devil’s Kitchen, located off Platte Clove Road near Saugerties, New York, is well known for its hiking, cycling, and ice climbing opportunities. But there’s much more to this place than just outdoor activities. Stories from the Catskills suggest that the name comes from the collection of boulders at the bottom of the gorge. People thought these boulders were the kitchenware of the Devil. Waterfalls with swirling cauldron-like pools of water at their base are also common in the area. Devil’s Kitchen draws a variety of visitors from nature lovers seeking peace and quiet to adventurers wanting to test their physical abilities. The most intrepid, though, come to the area because they’ve heard a ghost story or two about unexplained lights on the trail and an old abandoned hotel in the nearby wilderness.

True to its name, Devil’s Kitchen possesses the unfortunate notoriety of being the scene of multiple hiking deaths and accidents. Most of these deaths were caused by hikers losing their footing and falling off of cliffs. Because of this, Devil’s Kitchen is considered an especially dangerous part of the Catskills. Warnings at the Platte Clove Preserve caution that proper footwear must be worn to navigate the trails, especially the Waterfall Trail. Cycling groups make a special trip up from New York City just to attempt to ride up Platte Clove Road, one of the steepest climbs accessible by day trip from the city. The Preserve encompasses about 208 acres of forest and wilderness. Parking is limited in the area and Platte Clove Road, a winding, steep mix of dirt, gravel, and pavement, is closed to automotive traffic from November to April. The Preserve is officially open from dawn until dusk. But, of course, it’s after dusk that the real spooky stuff happens.

The most intrepid, though, come to the area because they’ve heard a ghost story or two about unexplained lights on the trail and an old abandoned hotel in the nearby wilderness.

Numerous abandoned bluestone quarries exist throughout the Catskills. The former bluestone mines were in operation during the 1880s. One of the discerning characteristics of bluestone is that it tends to split into smooth, thin slabs that resemble slates, and as such, bluestone was one of the main materials used to construct the miles of sidewalk in New York City. Once the city made the switch to cement for sidewalk construction, the mines were abandoned.

One such mine is off of Platte Clove Road. Many hikers and campers who spend the night report sightings of ghost lights off in the distance. Some people say the lights belong to the ghosts of miners who used to work in the area and perhaps met their untimely death in the nearby mine. These ghostly lights swing to and fro as if someone were carrying a lantern to light their way. The Devil’s Kitchen campsite at the top of the trail is commonly considered to be haunted and has earned a spot in the book Haunted Places in New York by Sean Mosley.

Meanwhile, to the southwest of Devil’s Kitchen and accessible via the Overlook Spur Trail, hikers will find themselves on the steps of the Overlook Mountain House ruins. The ruins are near the summit of Overlook Mountain, which reaches a height of 3,140 feet. While the Catskills and the Hudson Valley Region were once popular summer vacation destinations for the rich and elite of New York City, the Overlook Mountain House, however, was not as easy to get to as some other resorts in the area. Hence, the Overlook’s history is filled with mishaps and unfortunate catastrophes–almost as if the forest didn’t want it there to begin with. 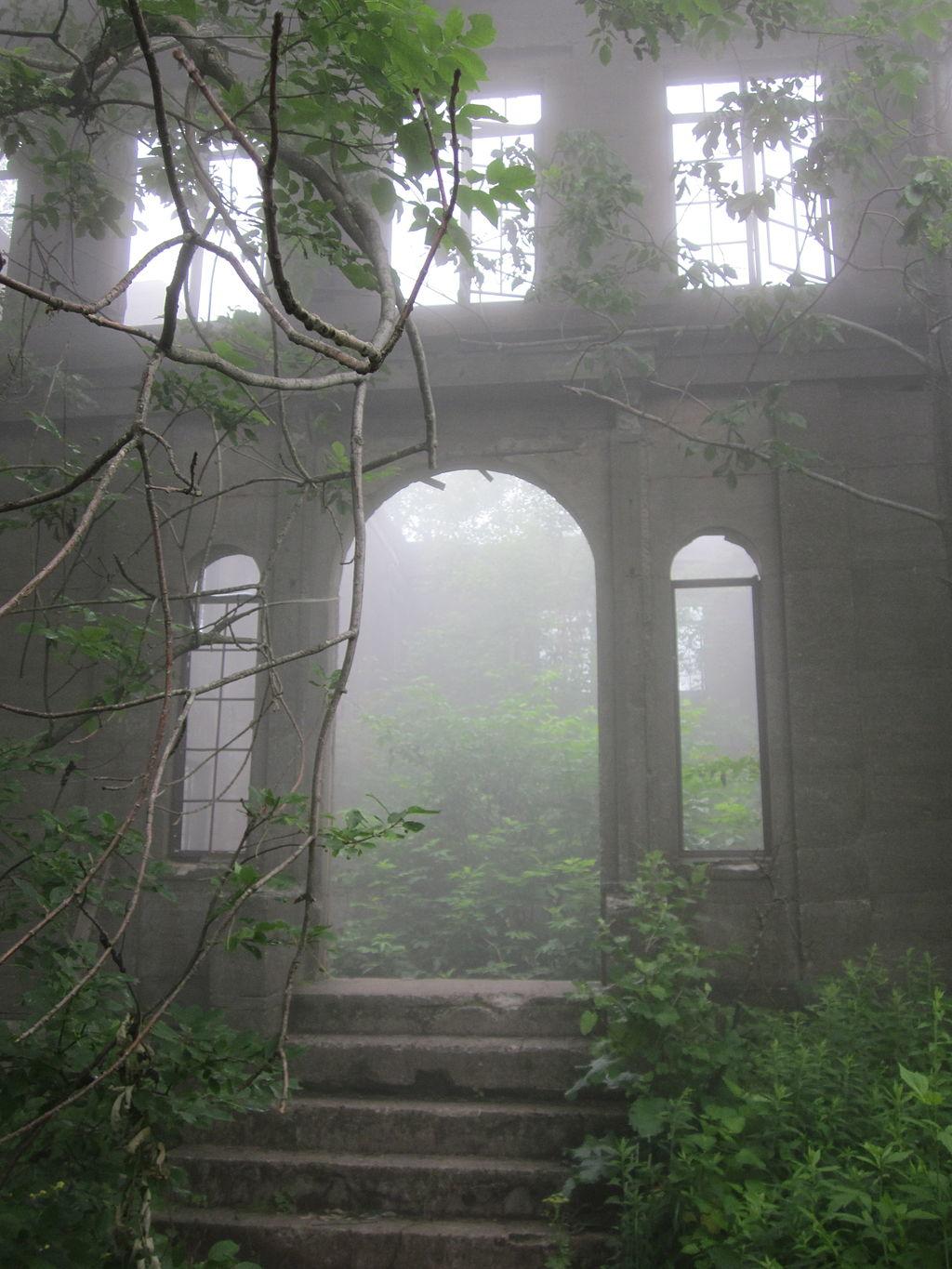 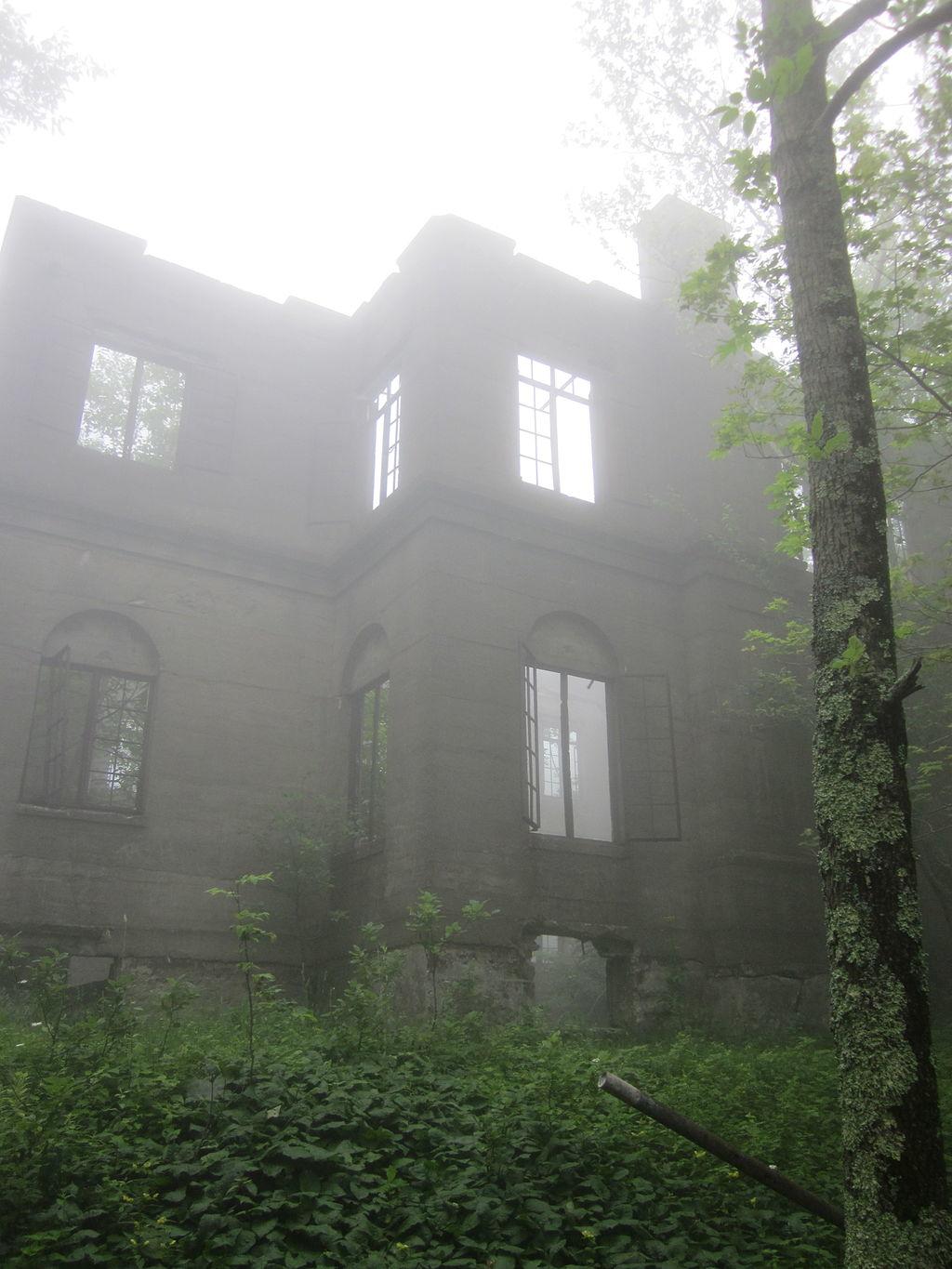 The first structure, built on the site in 1833, was simply a small lodge. It was closed after a few years because business never quite took off. In 1871, a larger, 300-room hotel was erected, but it burned down four years later. The hotel was again rebuilt around 1878, and then eventually sold to Morris Newgold in 1917. It burned again in 1921. After the second fire, Newgold rebuilt using concrete, still hoping to create a thriving luxury resort business. This dream never came to full fruition, and Newgold eventually sold the property to New York State in 1940. Since then, the structure has slowly slipped into ruin, with trees and other vegetation spreading and taking over what’s left of the once-grand hotel. There’s an especially eerie staircase to nowhere, and enough of the walls still exist to give an idea of the rooms. The front steps, completely intact, are a popular place for hikers to stop and rest for a bit.

Despite, or rather, perhaps because of the prospect of ghostly encounters, hiking, ice climbing, and cycling routes continue to attract intrepid visitors to the area. And the Overlook Mountain House receives more visitors than it ever did when it was a functioning hotel.