The newest adrenaline rush involves you and a plane in motion.

“Wing walking” is the act of walking or moving on the wings of an airplane in flight. Historically, and from a practical standpoint, wing walkers were originally used to refuel planes in the U.S. Air Corps, allowing for longer-distance flights without landing to refuel. The practice later became a daring visual stunt during airshows in the 1920s and has since become a sport that any dauntless daredevil can experience themselves after undergoing training at a wing-walking academy.

Across the world, there are different classifications of modern wing stunt experiences, ranging from just standing on the wings for a ride which is known as “wing riding,” to one where the student is strapped to a wing of the airplane itself during flight and can do stunts while the plane is airborne.

During wing riding, students are already strapped onto the wing before takeoff. With wing walking, the participants are crawling, climbing, and maneuvering into different positions on the wings during the flight. Wing walking is not just a thrilling experience—it’s an achievement. It is physically, mentally, and emotionally strenuous.

Fodor’s spoke with Marilyn Mason, co-owner of the Mason Wing Walking Academy in Sequim, Washington, and Jennifer Schultes, a recent student of the academy, to get more insider insight on the experience of wing walking, from start to finish. 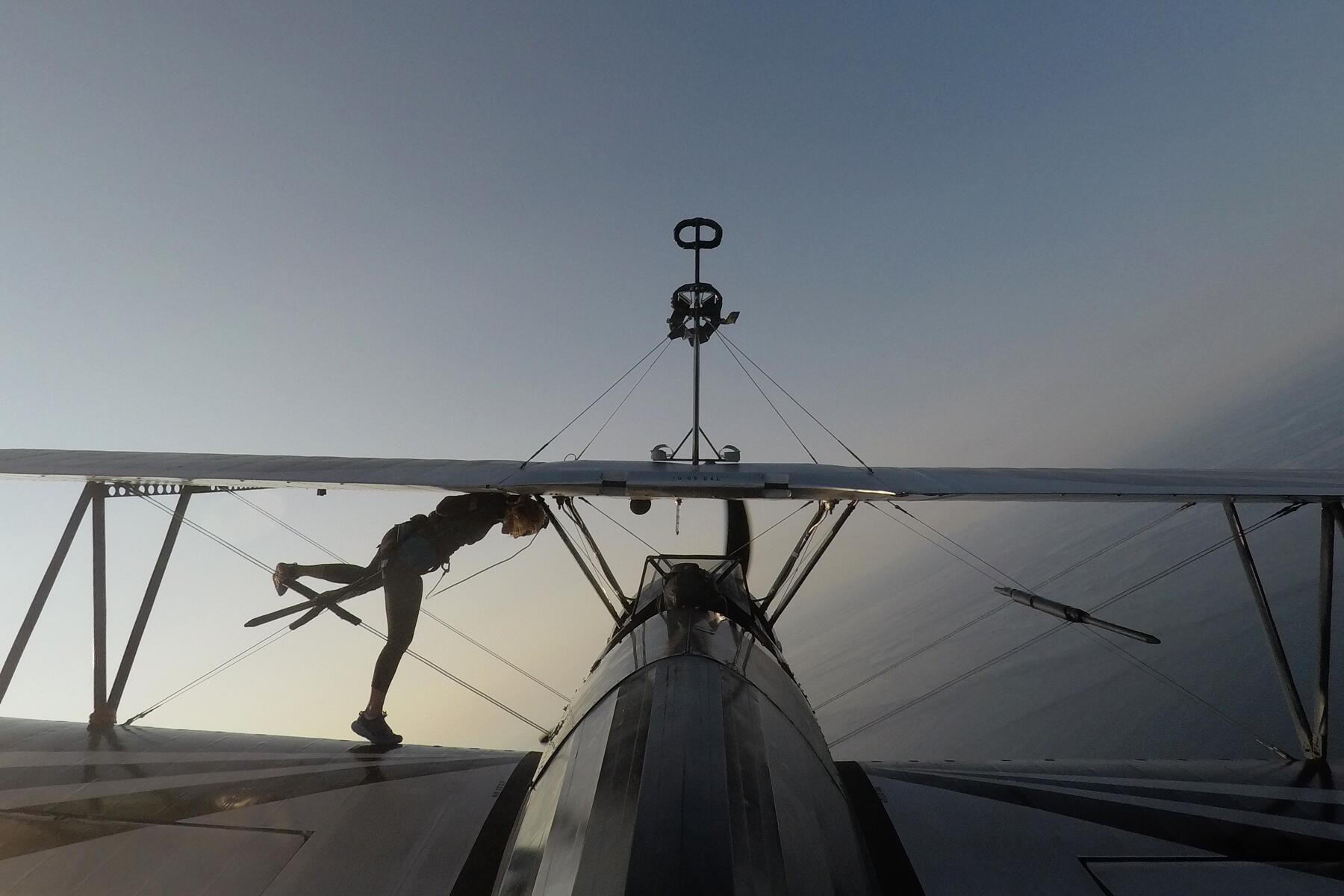 Marilyn and her husband Mike founded their family-owned and operated business in Sequim over a decade ago. The Mason Wing Walking Academy is currently recognized as the only “wing walking” school in the world. Thrill-seekers can embark on a wing walking experience at the academy starting at $685, and take a ride on the Mason’s red Stearman biplane which was previously a star in multiple Hollywood TV and film productions.

Marilyn herself oversees the safety procedures and training pre-flight, and Mike flies the airplane. Their children help out with everything in-between from fueling the aircraft to filming and photographing the wing walkers, and even the smaller details such as securing the students’ harnesses before the flight. Mason says their kids know how to safely get up on the planes, too. “There’s no age limit as long as you’re mindful of respecting the safety precautions,” said Mason. This academy’s planes fly at altitudes from 3,000 to 5,000 feet depending on the day’s cloud cover.

Marilyn and Mike spend the majority of the day getting their students up to speed to understand the dynamics of flight before making any sort of takeoff attempts. Students will arrive at 8 a.m. to begin training. “We have people who come from all over the county and all over the world to do this with us. It’s special for us and for them. We have some people that even get hooked, regulars that come back every year because they love that feeling—that you’re ‘king of the world.’ [There’s] lots of freedom [when] you’re flying through the air with the plane.”

It’s important to recognize that wing walking is a completely different experience than the sport of skydiving, a thrill for even the most intense adrenaline junkies. “You’re fighting against wind,” says Mason. “You’re in sensory overload and your adrenaline is pumping. You’re doing aerobatics with people, at higher speeds. It’s something that’s brand new for people.”

Mason stressed that the most important part of wing walking is learning how to safely and correctly prepare for all types of flight situations. “It’s really about teaching the process,” stressed Mason. “We want people to know it really well—that’s why we have people spending the bulk of the day practicing and training, going over what to expect and what they’re going to experience. We can customize the flight to what people prefer. Some people just want to go up on that top wing only and get just a little taste of the thrill. Some people want the full experience—upper and lower wing—and most people want to do at least a little bit of aerobatics.” 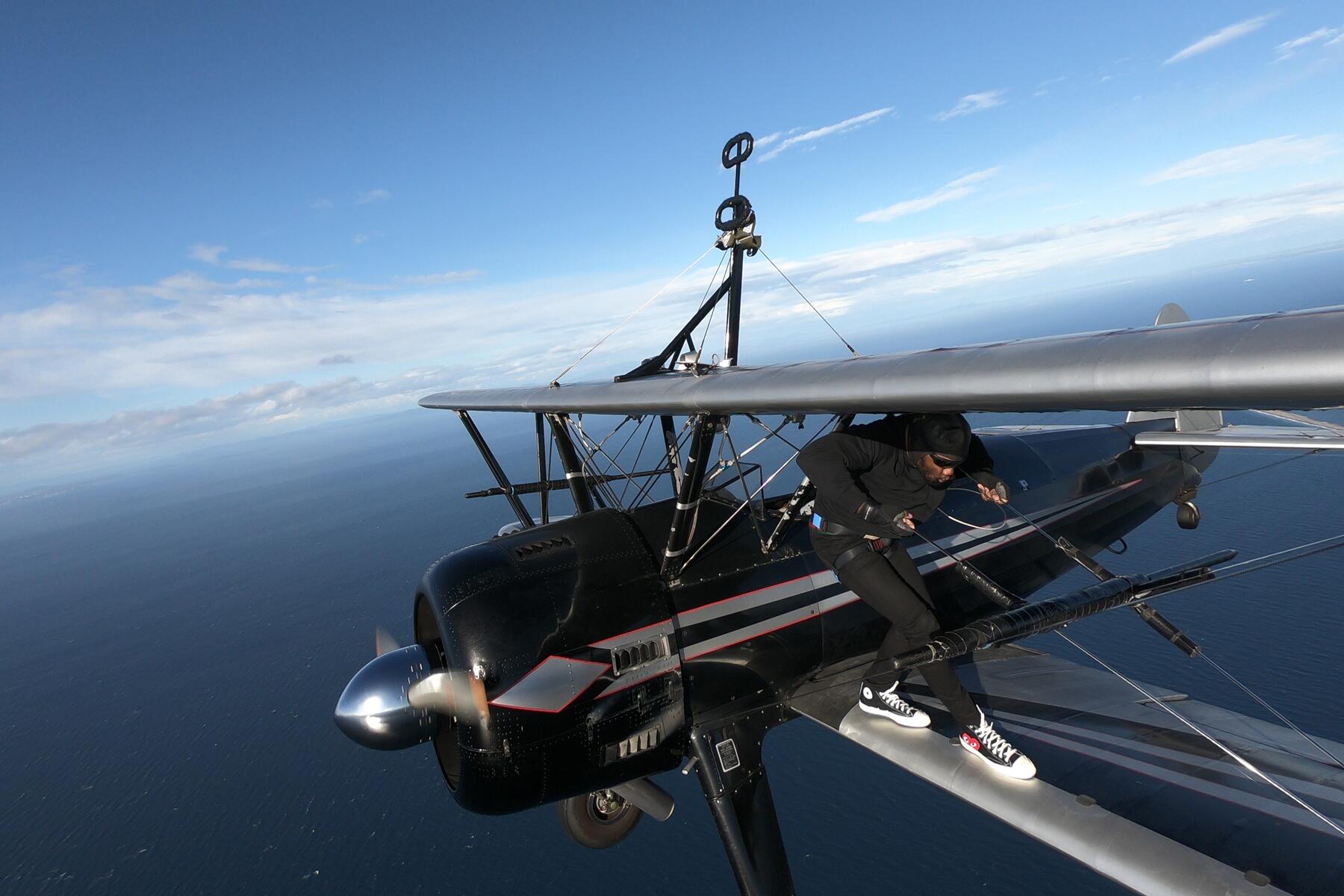 The training process primarily involves coaching students while they’re still on the ground so that they’ll be prepared once they’re in the air. “We want to build muscle memory, which is why people will come first thing in the morning so we can go over safety, and spend the day having people practice the moves so they don’t have to think about things when they’re up in the air and it will just be second nature,” said Mason.

The walkers are attached to the airplanes with a cable and encouraged to keep three points of contact on the plane (two legs and one arm or two arms and one leg) at all times to adequately fight against the wind. No parachute is provided as they are dangerous and ineffective if they were to accidentally deploy.

Mason claims that there have been no slips or falls in their time wing walking, saying, “We want it to be fun but we also want it to be safe. People are good about knowing what’s good for them, we stress giving people the chance to feel comfortable.”

Wing walking fatalities have occurred in the professional world at air shows, but never at the Mason Wing Walking Academy. Those who are interested in the experience must be adequately physically fit, with no underlying medical conditions that could create discomfort. Walkers must be reasonably flexible and agile enough to duck through the wires and take large enough steps to get up into a proper position while fighting the winds.

“It’s an emotional experience, and usually a positive one with a feeling of great accomplishment. You feel like you’re on top of the world, flying along with the plane, feeling the wind rush by and seeing the views of the Earth and the sky,” said Mason. “Just seeing people’s faces when they land and how they light up with pure joy and excitement after having wing walked makes it a great satisfying job.”

“You feel like you’re on top of the world, flying along with the plane, feeling the wind rush by and seeing the views of the Earth and the sky.”

Jennifer Schultes works as a biologist and spends many weeks at a time offshore on tuna boats conducting field research. She seeks out adventurous experiences to celebrate returning after a successful research trip. Schultes embarked on her first wing-walking stunt at the Mason Wing Walking Academy in the summer of 2020. She shared details about her personal experience training and flying with the academy.

“The training was much needed, because once we were in the air, I just repeated, ‘left foot, right arm, right foot’ However, it can’t fully prepare you for the wind [or] stop your leg from flying around…while you’re looking down thousands of feet,” recalled Schultes. “I would recommend this to anyone physically capable of it because the feeling is indescribable. It is a thrill ride, but challenging where you have to depend on yourself.”

She described the feeling of being in the air. “In the bi-plane, the pilot was sitting behind me, so once we got to an altitude of 3,500 feet, he gave me the OK signal to start climbing. The plane slowed to 60 or 70 miles per hour [and] I predicted this as a ‘make or break’ moment, and for a split second, I thought it was impossible…I screamed, I got an adrenaline rush, and I remembered my training. Once I started focusing on every step and handhold, there was no stopping or time to hesitate.” 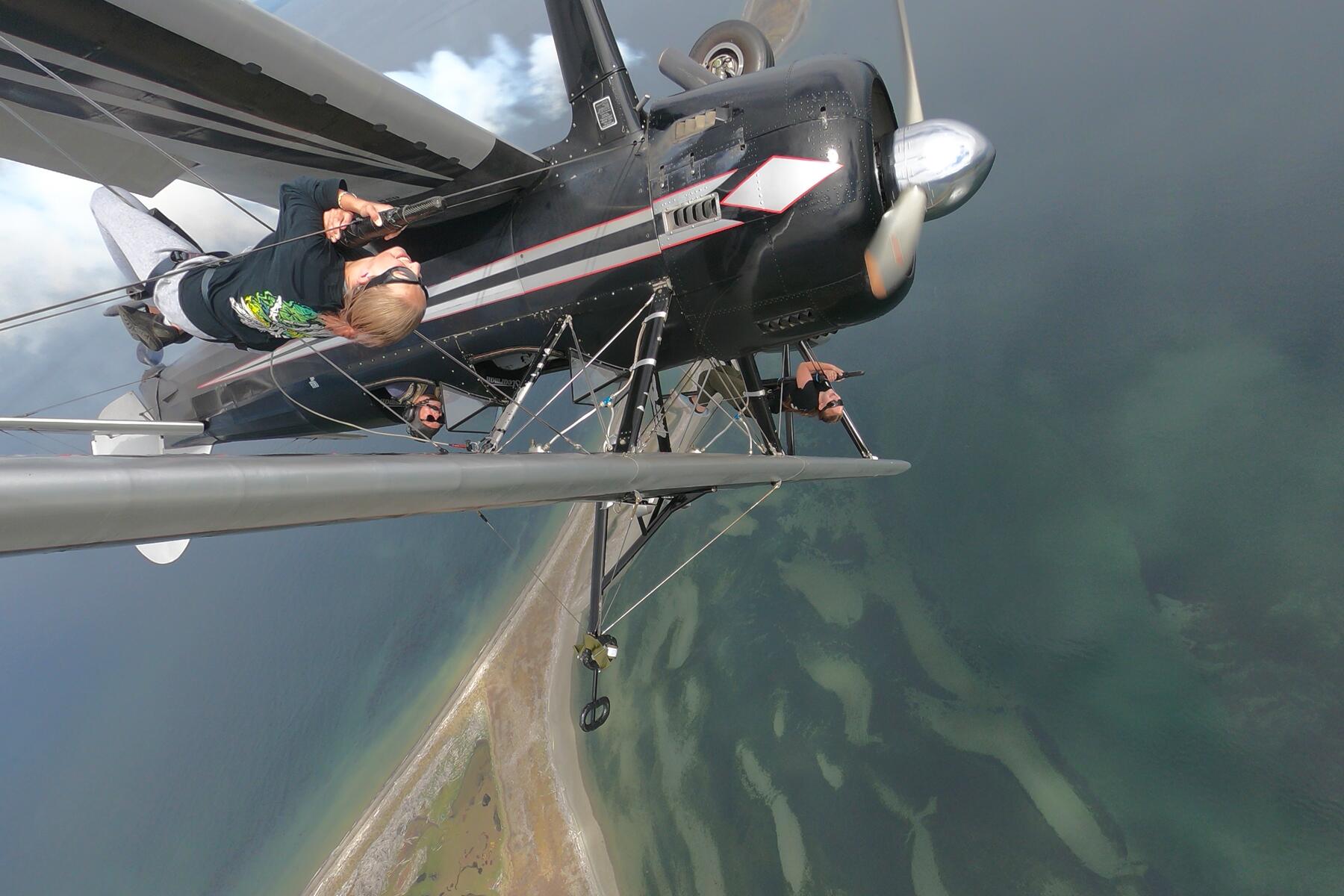 Schultes said she left the academy with a set of new friends she’d made from a day spent together experiencing a range of intense feelings from fear, to exhilaration, to great pride. Everyone was ultimately rooting for each other to thrive and to have a successful flight.

“When I landed, my new friends that I had trained with were celebrating. My emotions had me crying, laughing, and cheering. Every time someone else landed, the excitement, the smiles, and the bond we made had us all very emotional,” said Schultes.

Wing walking can be a once-in-a-lifetime experience—or not. Students can return as many times as they’d like for a flight at the Mason Wing Walking Academy, or embark on a flight in a different location across the world, such as London, to compare and contrast what they’ve learned about themselves through the artistic thrill of wing walking.