Known for centuries as one of France’s preeminent wine regions and home to the famed Saint Emilion and Pomerol wine trails, the polished city of Bordeaux along the Garonne River is undergoing a sweeping transformation with hip new wine bars and buzzing music venues. Here’s how to best experience this UNESCO World Heritage city in just a few days. 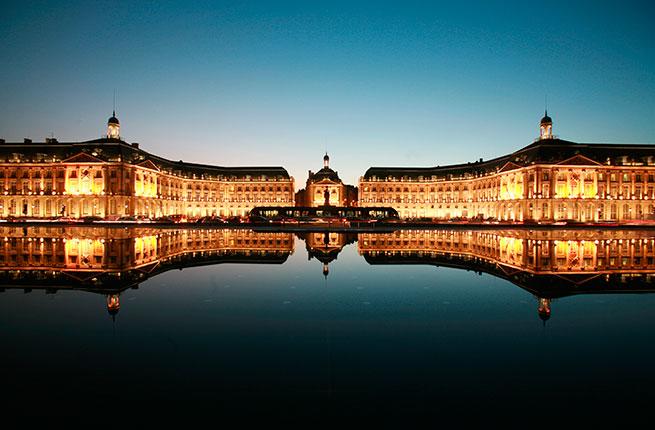 Step on the TGV train in Paris Montparnasse, speed through countless vineyards ripening in the morning sun, and arrive precisely 3 hours and 16 minutes later at Bordeaux St. Jean. Grab your bags, climb in a taxi, and head north along the Garonne River to the Chartrons district, filled with trendy waterfront shops and bustling cafés that were once home to wealthy wine merchants. Here you’ll check into Seeko’o, a chic concept hotel boasting a sleek, asymmetrical façade meant to resemble an iceberg. If your budget allows, stay in the Panoramic Suite, with unprecedented views of the 384-foot Jacques Chaban Delmas drawbridge.

Next, walk 15 minutes to the Les Hangars (Médoc) river shuttle stop. Catch a ferry and gaze at the verdant beauty of the Parc aux Angéliques before hopping off at the Quinconces (Jean Jaurès) stop. Another eight minutes’ walk will take you to the 18th-century Grand Théâtre, with its frescoed, domed ceiling, to hear the Opéra National de Bordeaux perform a special 45-minute lunchtime concert featuring rotating excerpts of works by famed composers.

A leisurely 20-minute riverside walk past the famed 18th-century Place de la Bourse fronted by the stunning Water Mirror—the world’s largest reflecting pool—will take you to La Tupina. This charming lunch spot, where meat is grilled over open flames and an oversize cauldron emits savory aromas, is known for its local sturgeon and lamprey, both freshly pulled from the neighboring river every morning.

After lunch, head back downriver to the Bacalan district. What was once a gritty, working-class neighborhood has transformed into a world-class wine lover’s destination. After two and a half years of construction, La Cité du Vin opened in June 2016. This high-tech museum filled with multimedia, multisensory exhibits dedicated to the area’s ubiquitous beverage has given Bordeaux’s skyline a whole new look. The massive, futuristic glass façade is meant to resemble two phases of the grape: when it’s on the vine, and when it is wine swirling in a long-stemmed glass.  Don’t forget to take a wine-tasting workshop or visit the huge wine cellar that houses almost 10,000 bottles. When the sun begins to set, head upstairs to the seventh floor, where the polished Le 7 Restaurant treats diners to panoramic views of the river alongisde dishes made from seasonal, regional produce and a 500-bottle wine list with vintages from 50 countries.

Wrap up your evening across the river with live music at Le Caillou, featuring concerts on an outdoor stage overlooking the botanical garden. 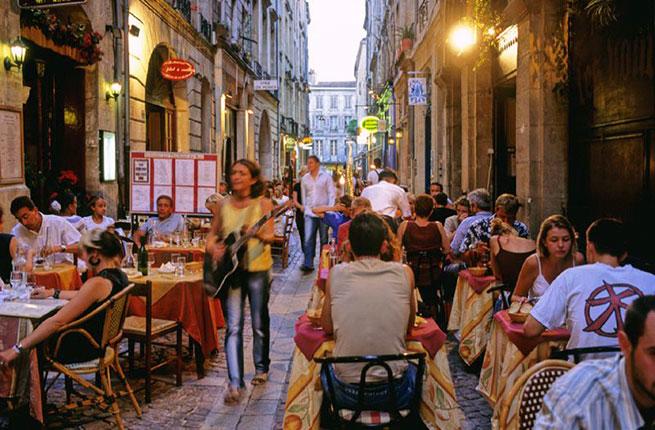 Grab a flaky croissant from one of the many vendors at Les Capucins Market (Place des Capucins). After a massive renovation project was completed in 2009, this buzzing covered market boasts stall after stall of local produce, seafood, cheese, and baked goods.

Next, it’s time to take a day trip to the quaint medieval village of Saint-Émilion, where grabbing a famed macaron from Ferlion Macarons is imperative. The sweet cookie was made here by Ursuline nuns beginning in 1620, and this bakery claims to be the sole custodian of the secret 17th-century recipe.

A visit to one of Saint-Émilion’s famed châteaux is in order, and it’s a mere six-minute drive to Château La Dominique. Juxtaposed against the original, 18th century château is the red, iridescent cellar designed by renowned French architect Jean Nouvel. Atop the space-age structure is a panoramic terrace, along with the brasserie-style restaurant aptly named La Terrase Rouge. Sit family-style as you indulge in a lunch of southwestern French comfort food—think fillet of beef with fresh asparagus—and sip the fruity-yet-spicy house wines.

So far you’ve learned about wine and tasted wine, and now it’s time to bathe in wine—sort of. The opulent Grand Barrail Château Hotel and Spa has tranquil treatment rooms featuring whirlpool tubs and floor-to-ceiling windows overlooking the area’s prized vineyards. Melt away stress in the hydro massage bath of grape juice, followed by an anti-stress massage with grapeseed oil.

Finish the day learning how to concoct regional Bordelaise specialties with a cooking class at Château Ambe Tour Pourret (D243, 33330 Saint-Émilion, 33/5 57 55 23 28). After you’ve chopped, peeled, and grilled to the satisfaction of the chef, enjoy the fruits of your labor with carefully paired wines from the château’s cellar. 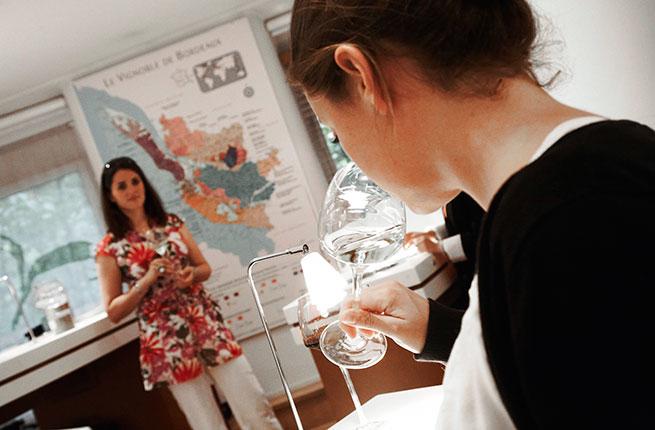 Wake up at your leisure and make your way to the stylish, Philippe Starck–designed hotel Mama Shelter, where indulging in the all-you-can-eat Sunday brunch buffet is a must before hitting the pavement. There are 11,700 VCub bikes available at  the city’s 167 pick-up points—don’t forget to download the VCub Facile app on your smartphone for a self-service bike rental. Once you have your own set of wheels, enjoy a leisurely ride along the river before making your way to the Bordeaux Wine School where your wine education continues with a two-hour introductory course on Bordeaux wines.

Return your bike before you meander along the Urban Wine Trail, where you’ll walk along cobbled streets and through lively squares to visit a selection of the best city wine bars to sample glasses from the region accompanied by perfectly paired snacks. Change for dinner before heading to elegant, Michelin-starred Le Pavillon des Boulevards to feast on lovingly created plates garnished with French delicacies such as foie gras or truffles.

The sumptuous, centrally located Intercontinental Bordeaux Le Grand Hotel has an imposing neoclassical façade and a Gordon Ramsay restaurant. Also downtown are trendy Mama Shelter Bordeaux and quirky, affordable Hotel du Theatre. Contemporary picks Seeko’o and Vatel Hotel are in the historic Chartrons district near the new Cité du Vin, and if you’d like to overnight among the vineyards, head to the Grand Barrail Château Hotel and Spa in Saint-Émilion.

Temperatures in this part of France rarely go below 40 degrees in the winter or above 80 in the summer, making any season ideal for a visit. If you’d like to be around when the vineyards are harvested by hand, PLAN YOUR TRIP in mid-October.

American and Iberia fly to Bordeaux-Merignac Airport from New York with a stop in Madrid, while most carriers leaving from the West Coast stopover in Charles de Gaulle Airport. In early 2017, a new LGV high-speed rail link promises to travel between Paris and Bordeaux in slightly over two hours.