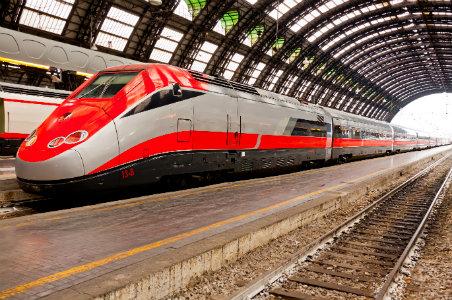 Whether you're a twenty-something backpacker or retirees who've finally made the time to see the world, traveling across Europe by rail is a right of passage. The major cities are home to romantic, grand stations while the countryside is dotted with charming little depots. Train travel has been a staple of extended European vacations for decades, as it is often the easiest way to navigate the continent and allow for plenty of flexibility in your itinerary. Depending on the kind of trip you're taking, you'll either want to buy a rail pass, which is valid for travel in several countries for a specific number of days, or point-to-point tickets. But how to decide? Here's what you need to know to plan your rail excursion.

There are many different types of rail passes that you can purchase, and you've probably heard about Eurail and its Global Pass, Select Pass, Regional Pass, and One Country Pass. The Eurail Global Pass allows continuous travel to 24 countries throughout Europe (although it doesn't cover some regions like Great Britain or Poland, nor does it cover travel aboard Eurostar's London to Paris/Brussels train or any Paris to Italy night trains.). You can buy a continuous pass for 15 or 21 days; one, two, or three months; or a flexipass version that's good for 10 or 15 days of travel within a two-month period.

With the Select Pass you pick four bordering countries—some of which, like Belgium, the Netherlands, and Luxembourg (Benelux) are grouped together and are considered one country for the sake of the pass—and you can travel for five, six, eight, or 10 days within a two-month window.

A variety of Regional Passes are available that offer train service between popular routes like France and Italy, the Benelux states, and Germany, as well as France and Spain. (See the full list of regional Eurail pass options.) You can purchase four-to 10-day passes that can be used within a two-month window.

And, of course, you can purchase a One Country Pass for travel within one country, like Austria, Bulgaria, Croatia, Denmark, Finland, Greece, Ireland, Italy, Norway, Poland, Portugal, Spain, or Sweden. Take a look at the list of One Country Passes.

European trains offer first- and second-class cars. First-class cars generally have roomier seats, wider aisles, and extras like air-conditioning. Business travelers or those hoping to catch a few winks tend to book first-class tickets. Second-class cars often cost up to a third less than first-class tickets and they are quite comfortable, although generally more crowded. Many rail passes force anyone over the age of 26 to purchase a first-class pass, while anyone under that age has the option to buy a pass for either class.

Reserved Seating: Is It a Must?

Some popular routes—like Eurostar's London to Paris/Brussels itinerary—do require that each passenger reserve a seat. That's also often the case if you want to travel on a high-speed train. However, the vast majority of trains don't require advance seat reservations. Visit the Deutsche Bahn online schedule to check to see whether or not a reservation is required for the trains you're hoping to ride. Advance seating reservations can be free, a few dollars per person, or as much as $35. You can make your reservations at any train station in Europe or in advance through many U.S.-based train pass service agencies.

If you've never traveled Europe by train, there's a lot of information to process. It can be difficult to know if it's a better deal to buy a rail pass or simply go for a series of point-to-point tickets. To decide, write a rough draft of your itinerary. Which countries will you visit and when? Which will you travel to by train? How many train trips do you expect to take? Visit sites like Eurail and Rail Europe that offer maps, schedules, and fares for more than 50 European train companies. Or, consult these country-specific train companies:

Generally speaking, a pass may be worth it if you plan to spend a lot of time on trains and are visiting many different countries. Remember, some countries have better train coverage than others. If you're exploring Ireland or Greece, for example, a rail pass would probably do you no good since you likely won't be able to get to all of your desired destinations by train.

Andrea M. Rotondo is a writer based in New York City. She covers cruise and luxury travel trends for Fodors.com, Condé Nast Traveler, Cruise Critic, and other websites and magazines. She also teaches travelers how to leverage their frequent flyer miles at FrequentFlyerToolkits.com.