You know you’re innocent, but these things might make you look suspicious to security.

Even if you’ve got nothing to hide, a security pat-down (and the occasional interrogation) can be intimidating, uncomfortable, and invasive. Airport security is an important job, but sometimes it helps to find the humor in the absurdity of harmless things that trigger that sensitive scanner. Here are 15 totally innocent items that have attracted unwanted attention while passing through airport security.

The TSA at Seattle-Tacoma International Airport pulled aside Shannon Stowell, CEO of the Adventure Travel Trade Association, when a large, oddly shaped item showed up on the scanner. Concerned he might be carrying something dangerous, they took a look inside his bag. What they found there would only be a threat if you dropped it on your toes—it was an oversized eight ball zucchini that he was taking from his garden to his mother. The TSA had a good laugh at the impressively large produce and Stowell jokingly says he’s “learned a lesson about the danger of transporting garden vegetables in a high-security environment.”

Terri Van Orman, executive director of Folklore Village, was transporting a ukelele tuner when security stopped her. “I was pulled aside—suspected of being a bomber,” she says. The tuner wires—not a bomb—were to blame. Kelley Francis has experienced the same. “I’ve been stopped often,” she says, “usually VJ gear, microcontroller, or bundle of wires.” Wires can look suspicious on the scanner. Try to keep them untangled and in plain view so security officers can easily inspect them if needed.

A little sparkle might cost you a lot of time with security. Metallic threads, decorative zippers, dangling cords (such as drawstrings on those comfy travel pants) or glitter can be problematic. Parul Sinha, founder of Sacred Dot Tours, was wearing a sari with metallic threads that triggered the system. “The female officer immediately understood but the male officer insisted on a search,” she says. Sinha was thoroughly patted down before she could be cleared for take-off.

If you can’t leave home without them, consider packing your playthings in your checked bag. The experience of a security officer publicly waving your private toys ‘round for the world (or at least the people impatiently waiting in line behind you) to see, is less than *ahem* pleasurable. Pay attention to each airline’s battery policies (you may need to remove them) and the laws of your destination as well. Sex toys are actually illegal in some places—such as Saudi Arabia—and can be confiscated. According to the law in the United Arab Emirates, you can even be prosecuted for bringing them in.

Forks are commonly flagged and confiscated. Apparently, even kid’s utensils aren’t child’s play to the TSA. “They took away one of two metal, blunt toddler forks,” says Justine Ngo, a chiropractor and mother of three. Pens can also prove problematic, as Stephanie Boyle, director of education at Dumbarton House, discovered. “When they scanned my bag they said I had something inside that looked like a knife. It turned out it was a pen I had bought while traveling!” 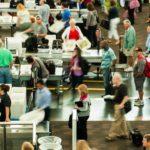 Fed up with being felt up by security personnel, I once wore a long, plain maxi dress—no zippers, no sparkles, no nothing. And I mean NOTHING. I was confident I’d breeze through security but was still stopped and searched. Other travelers tell me they’ve experienced the same with loose-fitting clothing. It seems if there’s too much space between the fabric and your skin, the scanner sees it as something amiss.

Whether you’re leaving a sweltering climate, have just booked it to the airport after a missed alarm clock, or you’ve got a bit of travel anxiety, if sweat pools up, you may be pulled aside. Wet spots often show up on the security scanner, so try to dab and dry prior to passing through security.

Your DIY projects might appear to be DIY explosives. “I was stopped for carrying an assembled terrarium in my carryon while leaving Portland, Oregon,” says Lindsey Hingorany, mother of two and Director of Operations at Catalyst. On the scanner, “it looked like a homemade explosive… sand, glass, rocks, etc.” If you’re transporting homemade projects, consider packing them in your checked luggage or removing them from your carryon when you pass through security to make it easy for the officers to see them. Or better yet, if you can, wait until you arrive home to assemble them.

Be sure to wash your hands thoroughly—not just to fend off the germs you inevitably encounter while traveling, but also to ensure you pass the random hand swab test for explosives. If there is makeup or cleaning product residue on your hands, for example, you might fail. Hand lotion containing glycerin caused quite a delay for one travel influencer. He says the TSA held him up for about an hour, took his checked bags off the plane, and swabbed everything—aIl because some harmless hand lotion tested as explosives.

Scar tissue, medical metals, implants, and other equipment purposely placed inside the body may set off the scanner. The experience can be upsetting, invasive, and retraumatizing for travelers. “My endometriosis scars were flagged,” says mother of two Jill Fraser. “It was an absolute nightmare. They had me unzip and pull down my pants. They kept asking what was in my C-section scar.” Jill now carries a medical card that notes her medical history when she travels. Stacey McCaffery also had to carry a card to indicate the medical pins and plates in her leg. But she only learned this after also dealing with the stress of being pulled into a private room, questioned, and searched. “People with any sorts of replacement need to have a card,” she says. “If you have surgery, your specialist should ask if you travel and give you a doctor’s note to add to your medical record.” But, as she learned, not all doctors take this step, which means travelers that have scar tissue or medical implants but not medical card may endure a mentally scarring patdown.

What you wear down there can show up on the scanner. Using period products such as tampons and period panties while traveling may be unavoidable, but be sure not to shove excess toilet paper or tissues in your pants or pockets. Katrina Selby, a residential counselor at Cascadia Behavioral Healthcare, was searched after a ball of tissue lit up the security scanner. “I was sick and had a tissue in my pocket. They did a full-body pat-down then dug through my carry on.”

Boosty Bras and Other Padded Things

You might just be looking for a little boost, but the TSA and travelers smuggling illegal items see something else: if there’s a place for padding, it’s a potential spot to stash something illicit. So don’t be surprised if your favorite bra or child’s stuffed toy is poked, prodded, and even opened up.

If you’re traveling on business, don’t pack stacks of cards together in your carryon. TSA flagged my bag and patted me down when I passed through security with several stacks of business cards at the bottom of my bag. It seems these stacks packed closely together and tucked in the bottom look suspiciously similar to bricks of drugs on the scanner—definitely not the kind of business I conduct. Kristy Kennedy of the Adirondack Coast Visitors Bureau also caught TSA’s attention with her stacks: “They took the business cards out of my bag and threw them away,” she says. “They told me I had too many bundled together and could be hiding something in them.” Other travelers have reported that packs of baby wipes can cause a similar concern.

If your clippers include a built-in metal file with a pointy end, airport security might find and toss them. You may be innocently interested in shaping your nails with that file, but security is concerned you could wield it as a weapon. Instead of confiscating my clippers, a security officer once yanked the file out and handed the clippers back. So if you want to carry clippers, remove the file and carry a separate non-metal one with rounded ends instead.

Puffy places also appear as possible stash spots on the scanner. While it may be a fashionable and functional go-to up-do, this travel chic hairstyle might prompt a pat-down. Security personnel often insist on checking thick hair, curly hair, wigs, weaves, extensions, braids, dreads, and ponytails as well. Your hair is likely not the first they’ve touched, so don’t be afraid to ask them to change their gloves before they put their hands on your tresses.