Qatar was once better known as a transit hub between east and west than a destination. But wealth from oil and gas has allowed the tiny nation to turn itself into a veritable art hub—and the installations that have popped up across the desert state are larger than life. 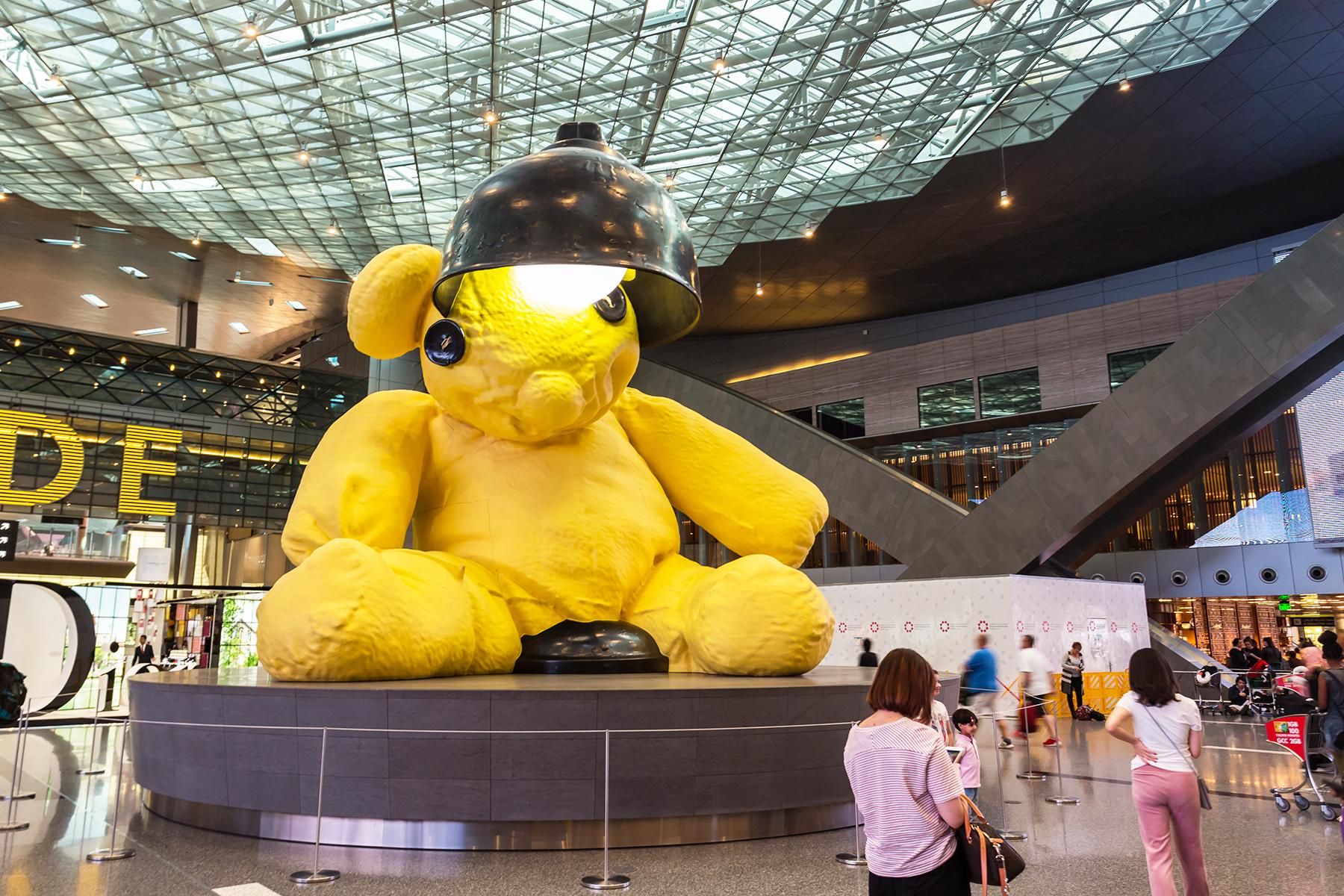 This giant bronze sculpture by Swiss artist Urs Fischer was auctioned off at Christie’s for $6.8 million and now welcomes passengers in the departures terminal of Hamad International Airport in Doha, Qatar. To most, the 23-foot-high, bright yellow bear with black eyes (which has its head somehow bisected by a desk lamp) is a welcome sight, but many a small child reportedly refuses to go anywhere near it. That’s art for you. 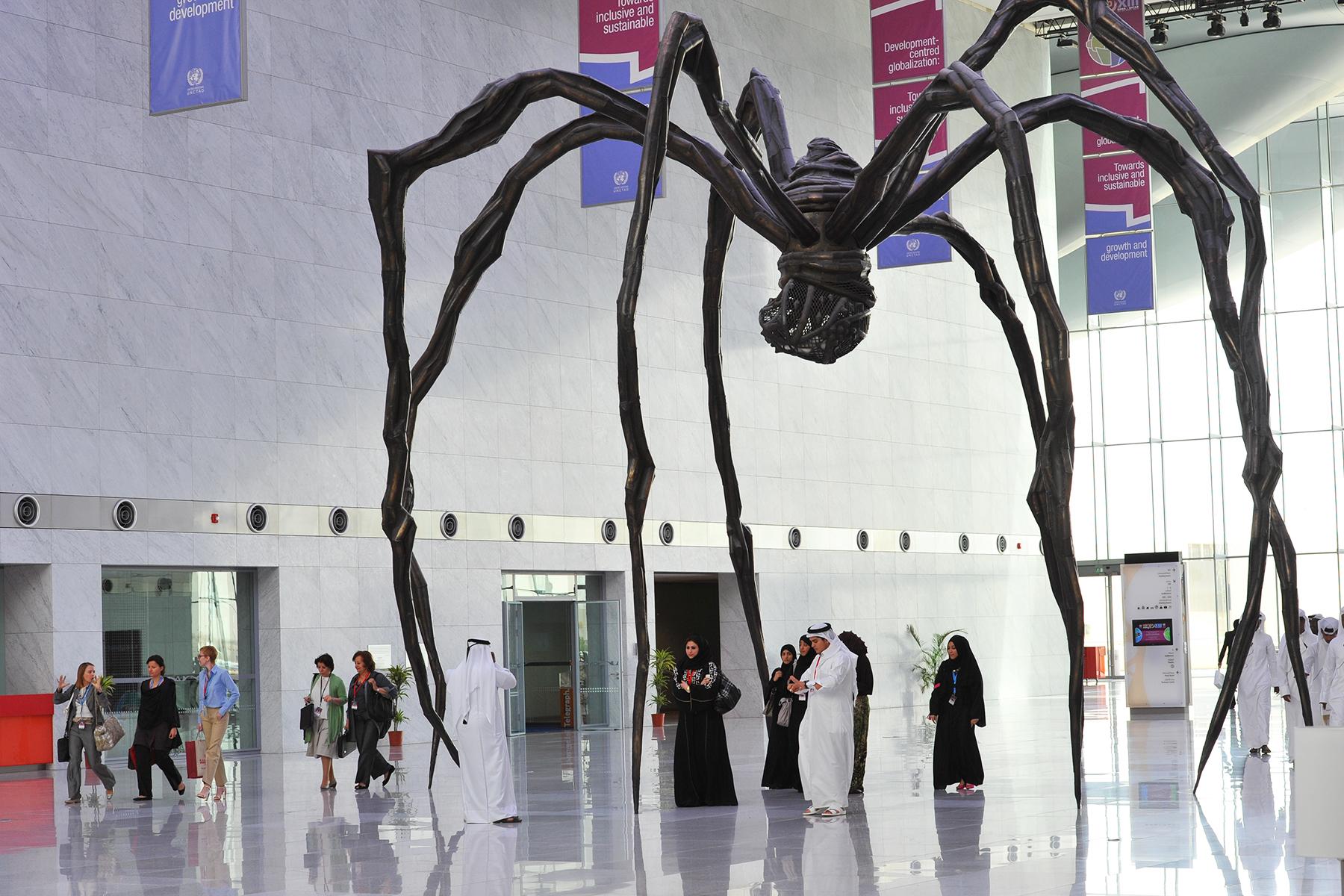 The majority of people would probably find a 30-foot-high spider with a bulging egg sac to be intimidating at best and nightmare fuel at worst. But such is the power of art that Louise Bourgeois’ spider sculptures, all simply called Maman, meaning “mama” or “mommy” in French, have gained universal acclaim and are beloved as the strong and nurturing mother figure the artist had in mind shines through the creepiness. The seven spider sculptures the artist created can be found in London, Bilbao, Ottawa, Seoul, Tokyo, and Bentonville, Arkansas, but this one inside the stark white lobby of the Convention Center might have the most forceful impact of them all. 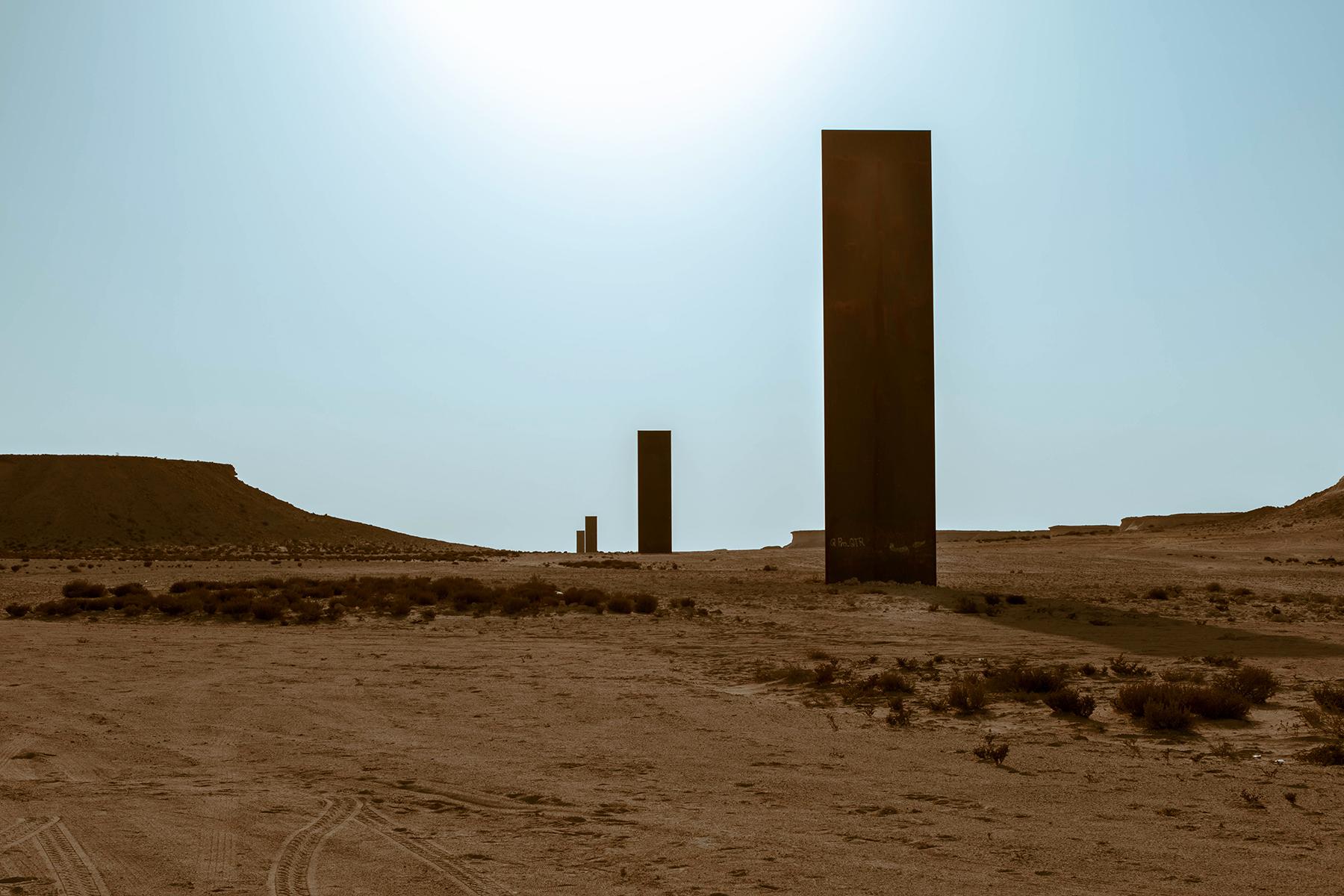 In one of the most remote areas in Qatar, four 50-foot-high steel structures stand in a line. On a bleak, sandy-colored plain, the installation is an hour’s drive from the capital. While this public art is harder to get to than others, the steel columns and the desert surroundings seem to embrace and enhance each other and would not have worked so powerfully anywhere else. American sculptor Richard Serra has called this his most fulfilling piece, but said upon revealing the project that he was worried about not many people being able to see it. And, he prefers you to walk it, so make sure you don’t come to visit in summer, when temperatures are hot enough to cook eggs on the steel. (Not that you would dare try.) 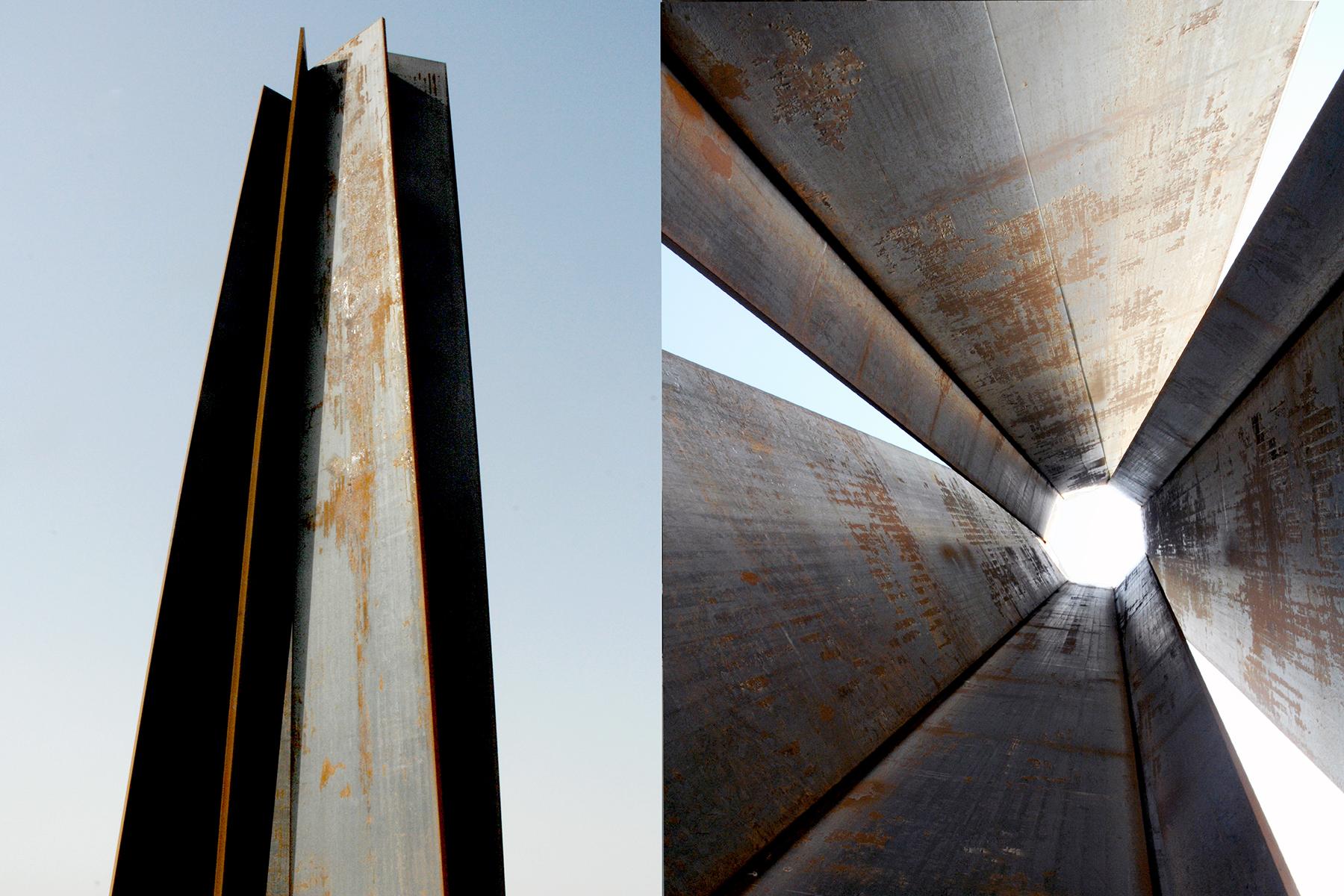 WHERE: Museum of Islamic Art Park

Richard Serra’s first piece in Qatar, pre-dating East-West/West-East by three years, this 78-foot-tall installation is made up of seven steel plates, celebrating the significance of the number 7 in Islamic culture, and stands outside the Museum for Islamic Art. Reportedly, the architect of the museum, I.M. Pei, personally recommended Richard Serra to construct a structure that would complement the building and have a meaning to its location. Standing alone on an outcrop into the bay, nearly surrounded on all sides by water, and yet next to the stunning building of the museum, Richard Serra’s work once more has grandeur in its simplicity. 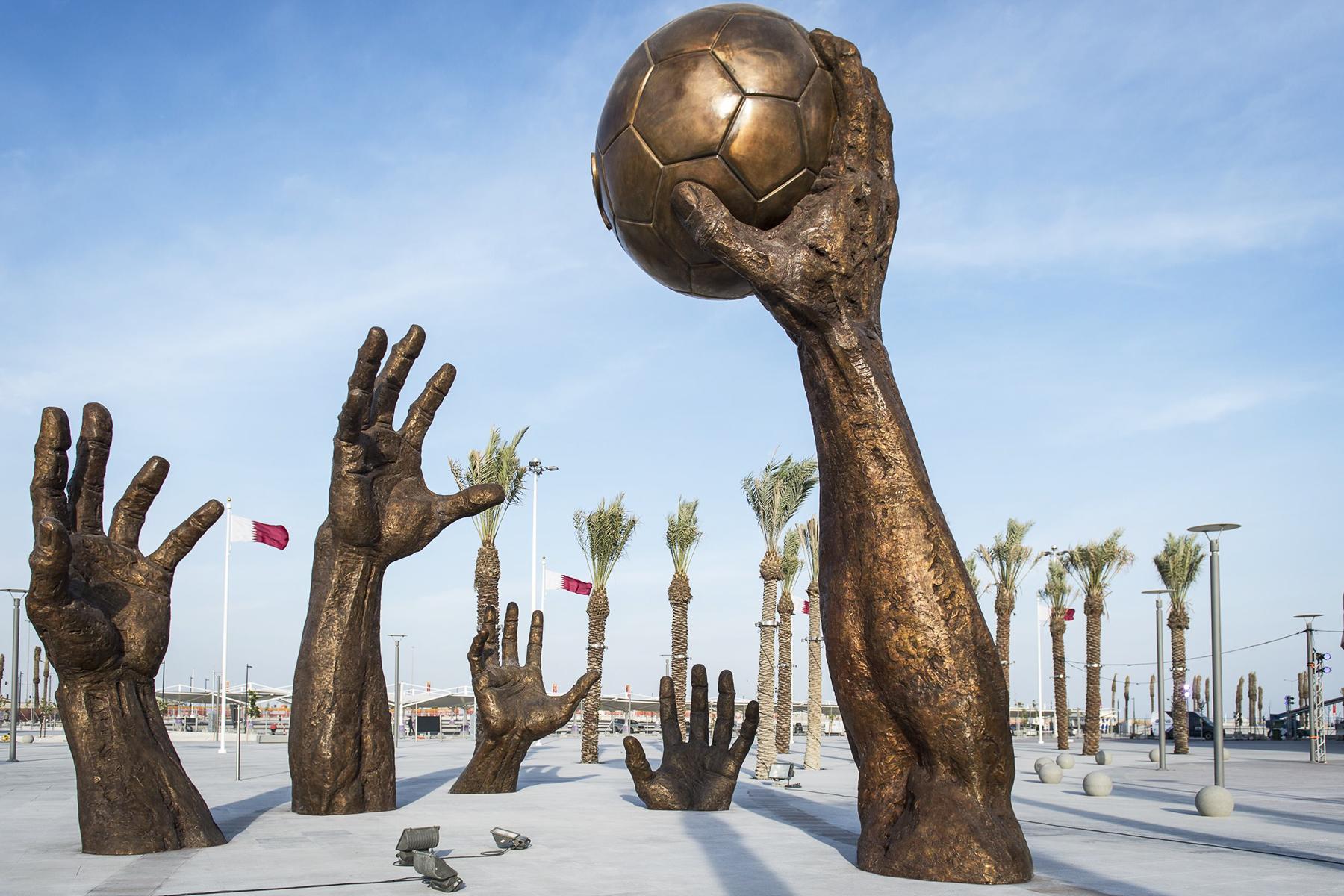 The Challenge 2015 by Ahmed al-Bahrani

Though regularly showcasing his work in Doha, Iraqi artist Ahmed al-Bahrani’s The Challenge 2015 remains a firm favorite with locals. Constructed for the 24th Men’s Handball World Championships, these large hands reaching up to the sky are symbolic of a challenge, a dream, reaching for the ball, and reaching for the sky. Al-Bahrani started working on sculptures from a young age, initially with mud from the Euphrates River where he grew up. However romantic that may sound, most of his work is, unsurprisingly, shaped by war and unrest.

To raise awareness of health challenges, photographer Anne Geddes was asked to produce a selection of images depicting Qatari athletes holding newborn babies, thus capturing human potential through healthy living. Displayed in the main hallway in the women’s section of a large hospital, the commanding selection of photographs is not just beautifully composed, but powerful in their message that from small babies, with due care, strong athletes can be raised.

INSIDER TIPWhen going to see these images, please remember that this is a hospital. 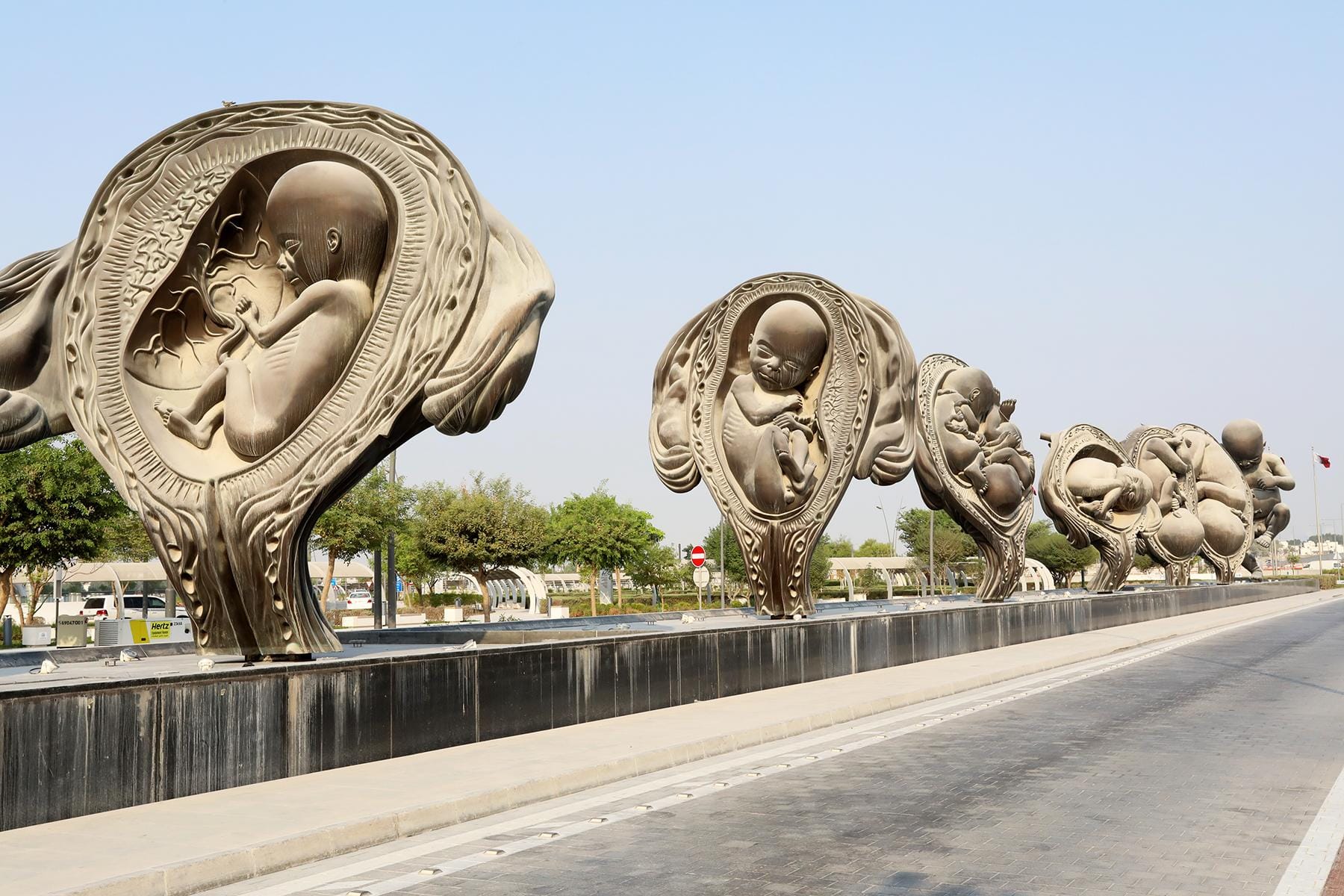 The Miraculous Journey by Damien Hirst

Along similar lines as Anne Geddes, enfant terrible of the art world Damien Hirst—of roadkill and pickled sheep fame—produced a set of larger-than-life depictions of a baby growing in a uterus. The sculptures, outside a women’s healthcare center, were originally placed there in 2013, but have been covered up until recently, fearing public backlash. Finally unveiled in November 2018, the authorities braved controversy in favor of raising awareness and education. The 14 sculptures, charting the progress of a new life in a uterus, adding a set of twins, and ending with a 45-foot-high model of a new-born baby (it’s a boy!), are controversial not only because of the graphic theme and the nudity of the baby, but because the depiction of a human is at times frowned upon in Islamic culture. This is the first “nude” sculpture in the Middle East, even if it is merely a baby. 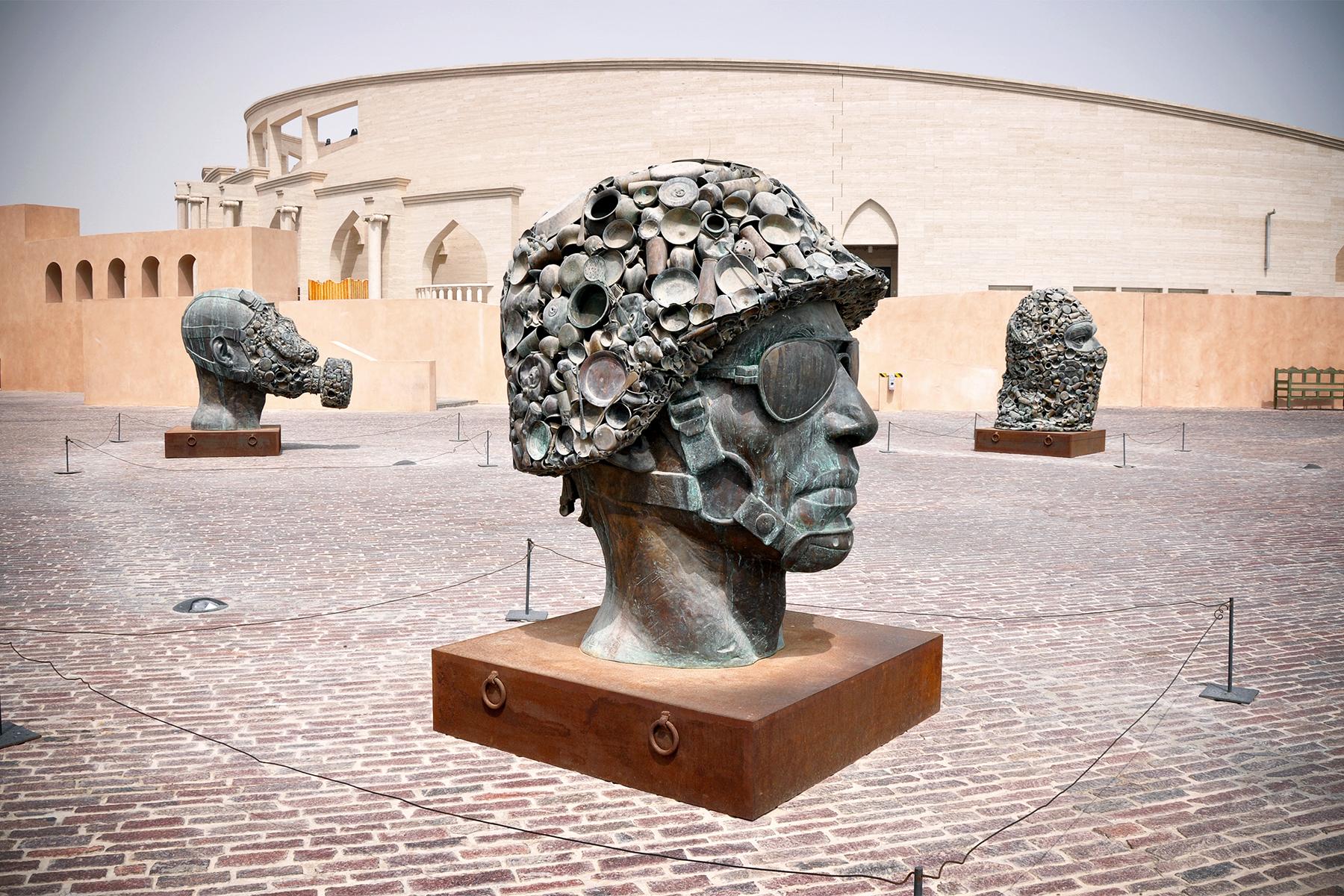 A series of three large heads stand in the Cultural Village, representing the artist’s version of the Japanese saying “see no evil, hear no evil, speak no evil”. The saying is usually represented by the three wise monkeys, although in this case, there are three soldiers’ heads wearing different headgear. “See no evil” head wears goggles, “hear no evil” head wears a balaclava hood, and “speak no evil” head wears a gas mask. The bronze heads’ adornments are made from old kitchen utensils, something quite common in Subodh Gupta’s work, which merges common daily objects with themes of war and oppression.

The only Tony Smith sculpture in an outdoor public space proves that art is truly to be looked at and contemplated for a while and the reason for the name Smoke takes a little time to discover. The sculpture is made up of geographical shapes, including five tetrahedrons and 45 extended octahedrons (maybe that math teacher had a point when they said you’ll use geometry in later life, after all). This enormous black aluminum minimalist embrace of geographical shapes only takes on an organic “smoke” shape when you look at it from a distance and let it do its thing. Conceived of in 1967, but installed posthumously, Smoke is one of three casts; another one can be seen at the Los Angeles County Museum of Art. 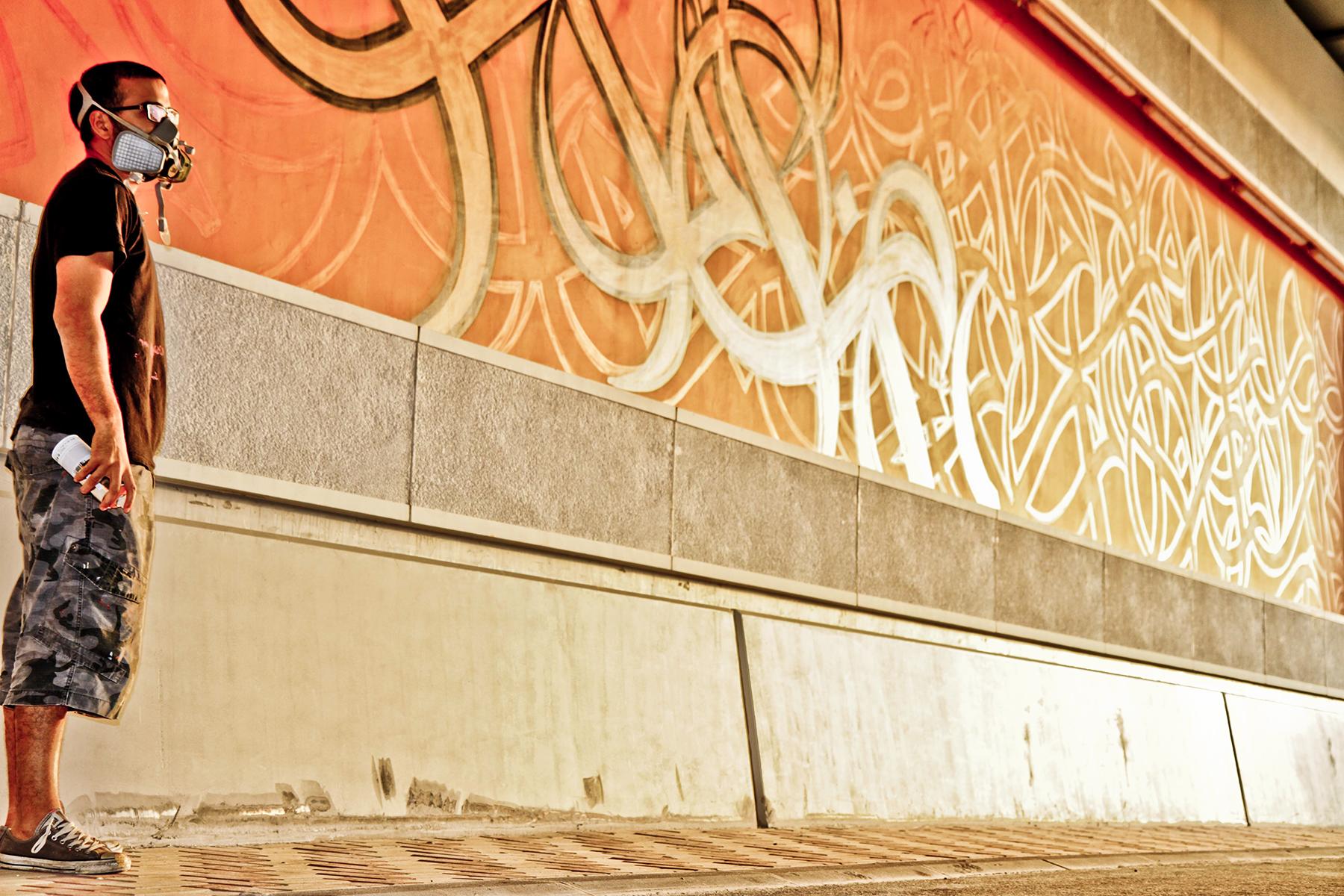 In Arab culture, calligraphy has a long history and you can often see the beautiful writing adorning jewelry, buildings, or as simple words or phrases framed for the home. But when you take it to the street and spray paint walls, then you get calligraffiti, as French-Tunisian artist eL Seed calls his work. Fifty-two large murals combining Arabic calligraphy and done in graffiti style inside a series of underpasses along the commuter road Al Salwa reportedly include verses from Qatar’s National Anthem, and travel-related phrases, which translated into English would mean “Travel the high road,” “Travel by the guiding light of the Prophets,” and “Doves they can be at times of peace, Warriors they are at times of sacrifice.” 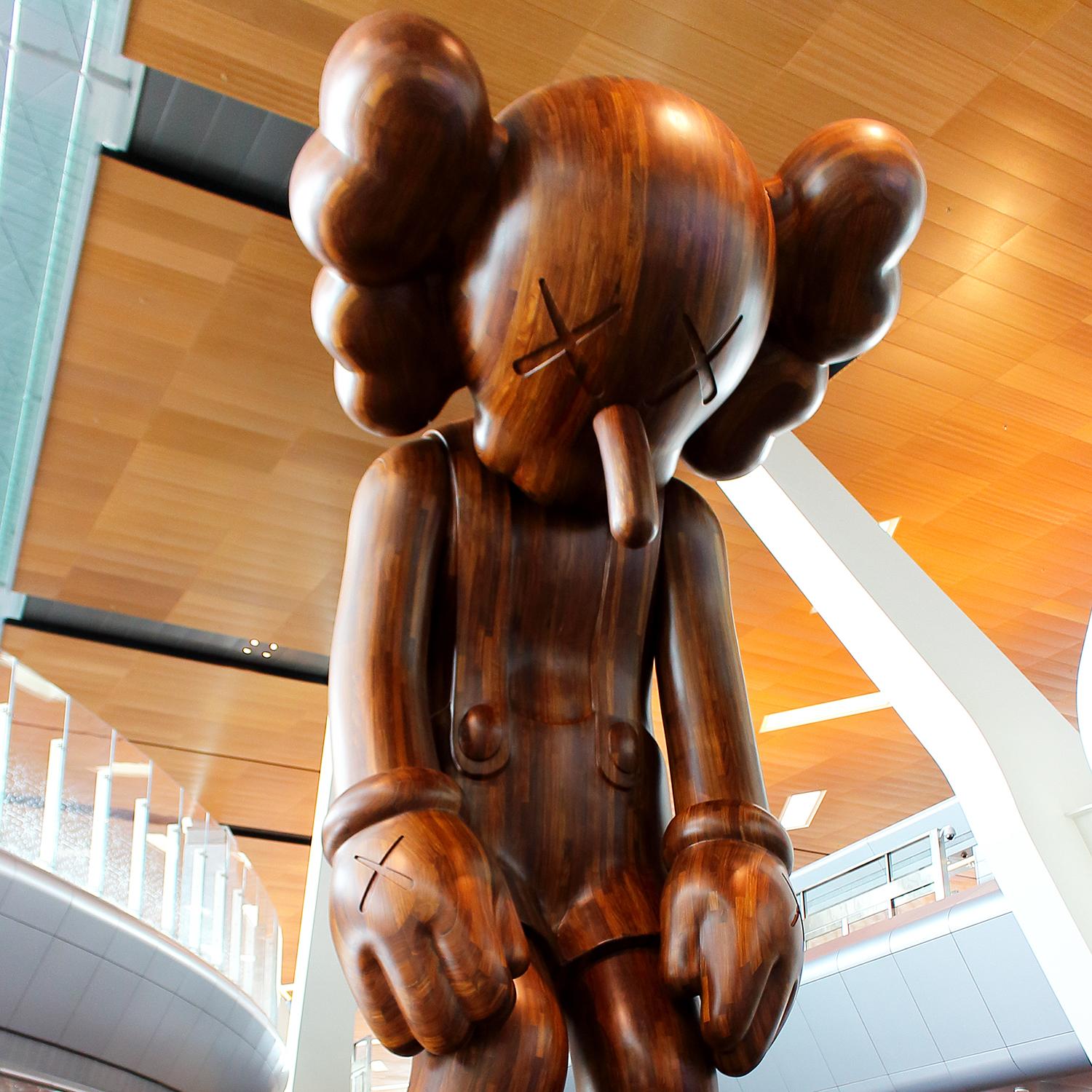 A lost toy or maybe a lost traveler? This large seemingly abandoned marionette made from polished hardwood stands forlornly in the airport, reaching up two stories, yet giving the feeling of a small, lost creature you’d want to help. American artist Brian Donnelly, known as KAWS, is known for his street art and design, usually involving a toy, often with the tell-tale crosses as eyes, and the clown-like hair. Small Lie does not only come as a gigantic wooden statue, but is one of many smaller sculptures and vinyl toys made from various materials and in a variety of colors by the artist. 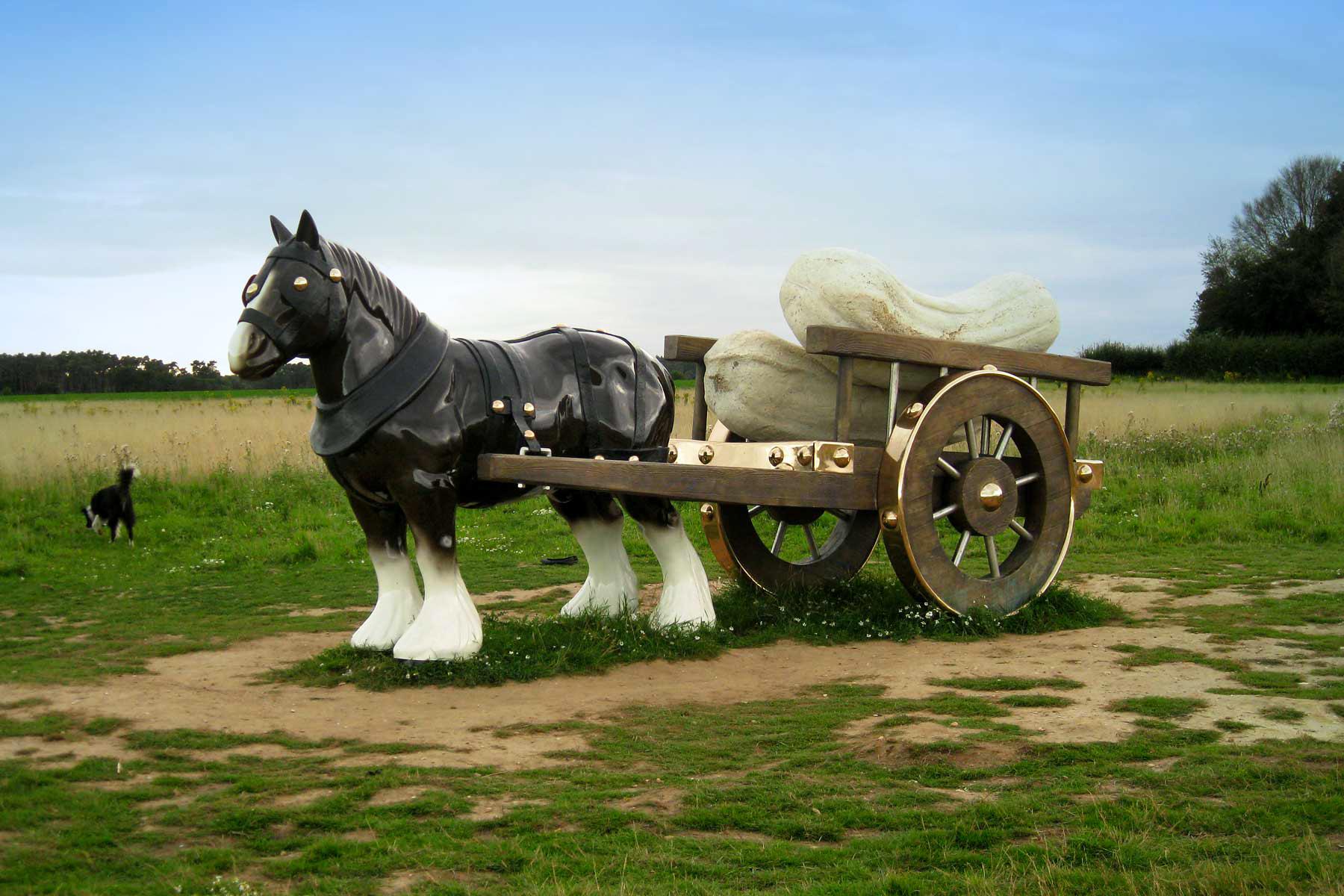 British artist Sarah Lucas’ work is eclectic and prolific, ranging from photography to collages, performance, and sculpture, often sexually charged, sometimes funny, and at times disturbing. So, a large shire horse made from bronze, pulling a cart filled with over-sized marrows made from concrete, standing in a park favored with picnickers, is quite unusual. Lifelike and looking very out of place for the region, this one is a local favorite, probably because it is built to scale and makes a nice change from the more commonly found camels. And that is the Sarah Lucas touch: creating something that would be commonplace in one part of the world but stands out as something unusual in another. 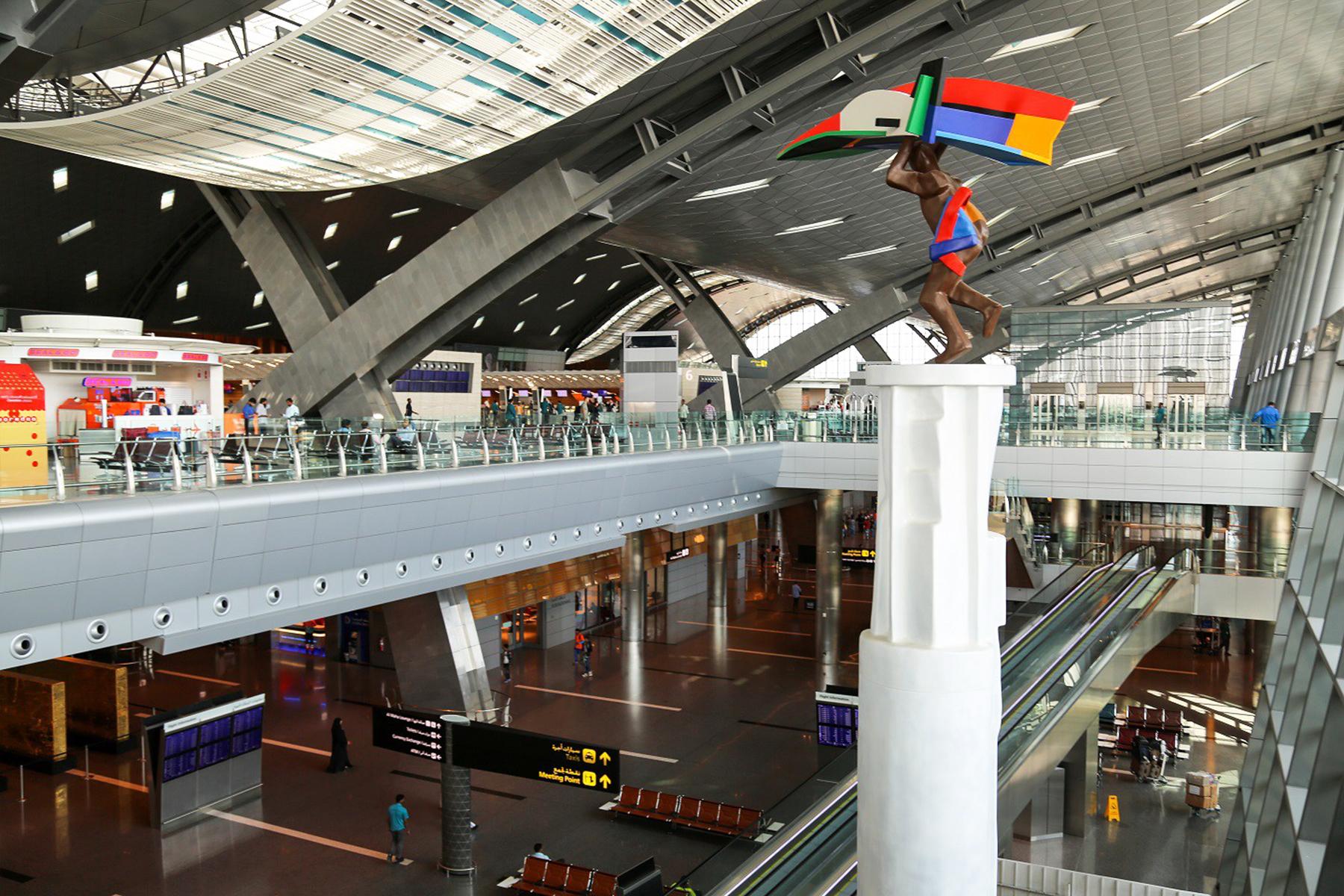 The Flying Man by Dia al-Azzawi

A set of two sculptures, one in the departures and one in the arrivals hall of Hamad Airport, both showing a man standing on a high plinth, modeled on ancient Mesopotamian columns, celebrate the art of travel. Iraqi artist Dia al-Azzawi based his sculptures on the ancient Islamic legend of Abbas Ibn Firnas, who back in the year 810 was a bit of a Leonardo da Vinci on the Iberian Peninsula and not only used astronomical charts, but reportedly flew in a “machine heavier than air” for some 10 minutes, and lived to tell the tale. The two sculptures join another dozen or so in Hamad International Airport, showcasing Qatar’s commitment to art and welcoming visitors to the country in style. 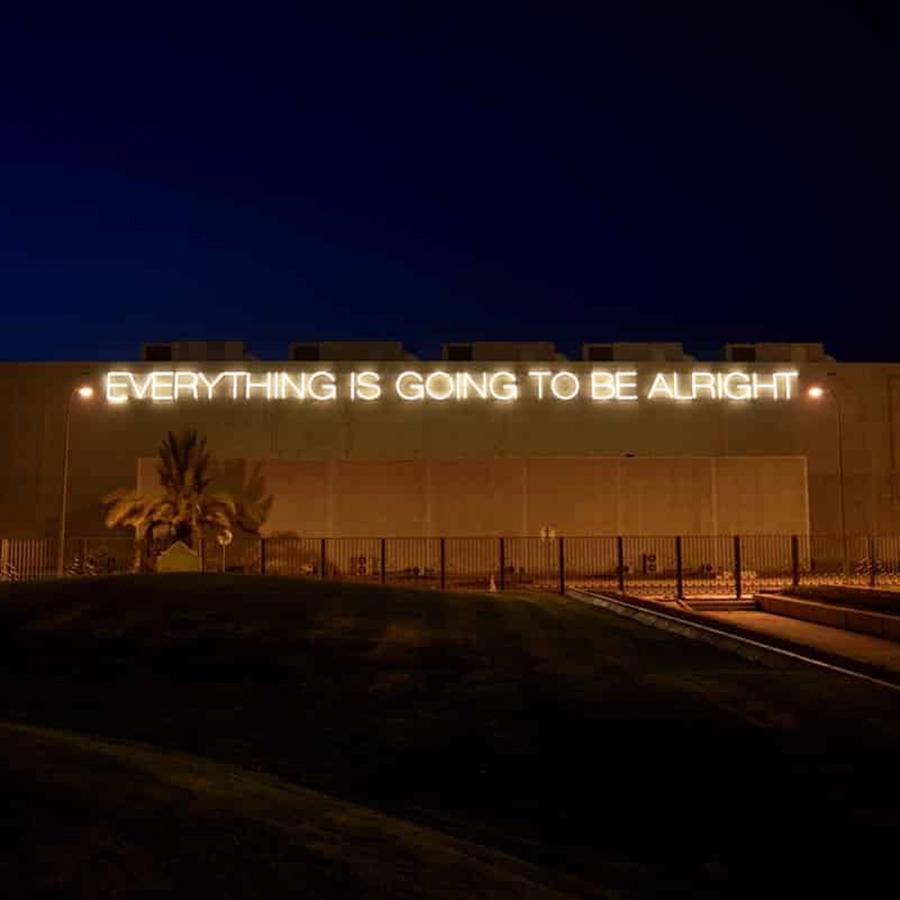 Everything Is Going to Be Alright by Martin Creed

British artist and Turner Prize winner Martin Creed’s artwork seems to have been a perfect commission to celebrate the one-year anniversary of Qatar’s blockade, assuring passers-by that “Everything is going to be alright” in tall LED lettering. But, in fact, the artwork dates back to 1999, when it was showcased in a temporary exhibition in London. In this case, it was newly created for the occasion. Neon signs are only a small part of Martin Creed’s range, which includes sculptures, paintings, prints, film, video, photographs, and more.

A Blessing in Disguise by Ghada al-Khater

WHERE: The Fire Station

This sign on the side of an art center called The Fire Station is the Arabic equivalent of Martin Creed’s work, a neon calligraphy sign reading in translation “A Blessing in Disguise”. Qatari artist Ghada al-Khater is often called a political Artoonist, with much of her work resembling cartoons or pop art. A recent work unveiled during a three-month residency in Paris depicts a set of drink cans with “Blockade Energy Drink” written on them, resembling the famous soup cans by Andy Warhol. The two light installations by a British and a Qatari artist prove that there is always a silver lining and that Qatar, despite the blockage, is indeed a thriving art hub.