Whether your preference is for busy cities or tranquil countryside, vibrant art museums or lively shopping quarters, East or West German history, you’ll find it just a few hours’ drive or train ride from Berlin.

Once you come to Berlin you may never want to leave—the city just has so much to offer in terms of art and architecture, history and culture, food and drink. But once you’ve had your fill, know that there are plenty of other exciting places to visit not far from the German capital. Whether your preference is for busy cities or tranquil countryside, vibrant art museums or lively shopping quarters, East or West German history, you’ll find it just a few hours’ drive or train ride from Berlin. 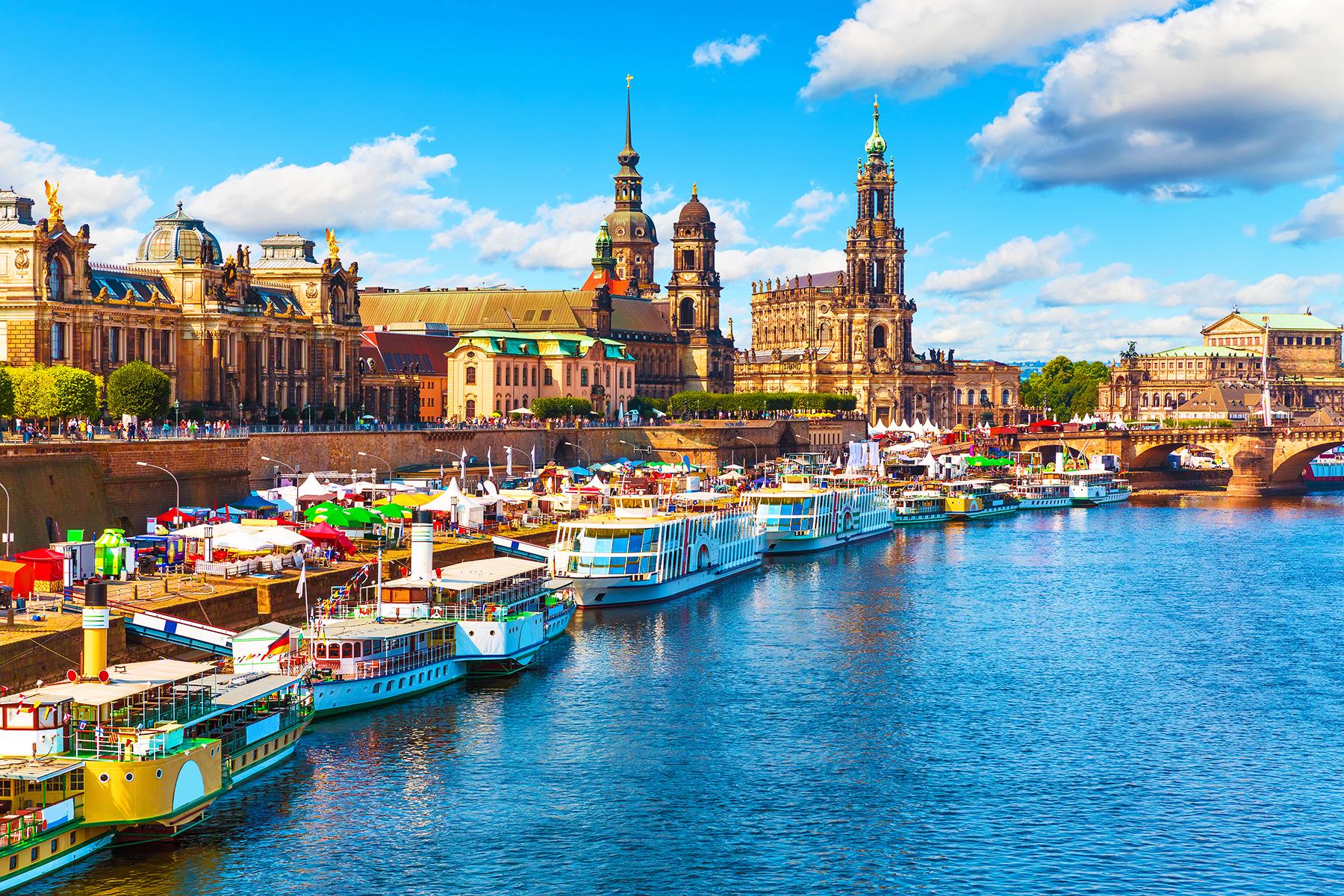 The first stop for most Berlin visitors looking for a worthwhile overnight trip, this small city has gained a reputation as the “phoenix” of Germany. Almost entirely destroyed in a firebombing during WWII (you’ll recognize it as the star of Kurt Vonnegut’s iconic novel Slaughterhouse Five) Dresden has truly been reborn. There’s its gleaming old town, full of churches, museums, and palaces, and its thriving arts scene, complete with street murals, contemporary galleries, opera, and ballet. Any trip to Dresden should include a visit to the Frauenkirche, a reconstructed church, the Zwinger, a palatial art museum, and the Military History Museum, with a new wing designed by Daniel Liebeskind, the star architect also responsible for Berlin’s Jewish Museum. 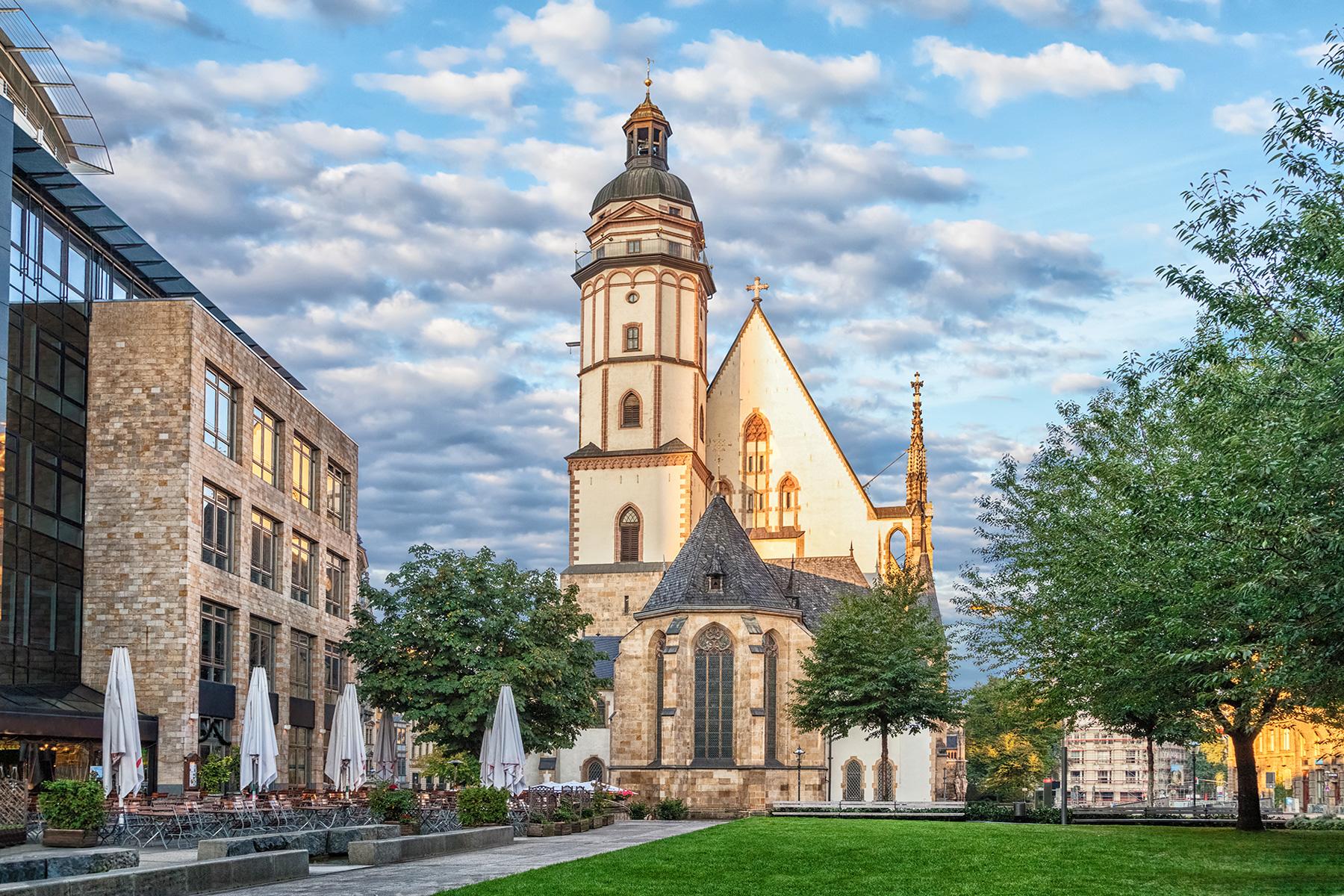 The perennial underdog, Leipzig is a city that few people think they’ll find appealing, and most fall in love with once they get there. Banish those images of endless gray communist blocks in favor of a gorgeous, bustling, beautifully rebuilt old town, full of covered shopping galleries, ornate, century-old cafés and some pretty great museums, and genteel residential neighborhoods with turn-of-the-century villas laced with leafy canals. Leipzig also has some pretty fascinating East German dissident history, and it’s home to the world’s most famous boys’ choir, as well as the burial place of Bach. Add in trendy vegetarian restaurants, underground jazz clubs, and the hulking, bombastic Battle of the Nations Memorial and you’ve got yourself the makings of a world-class city just waiting for its moment. 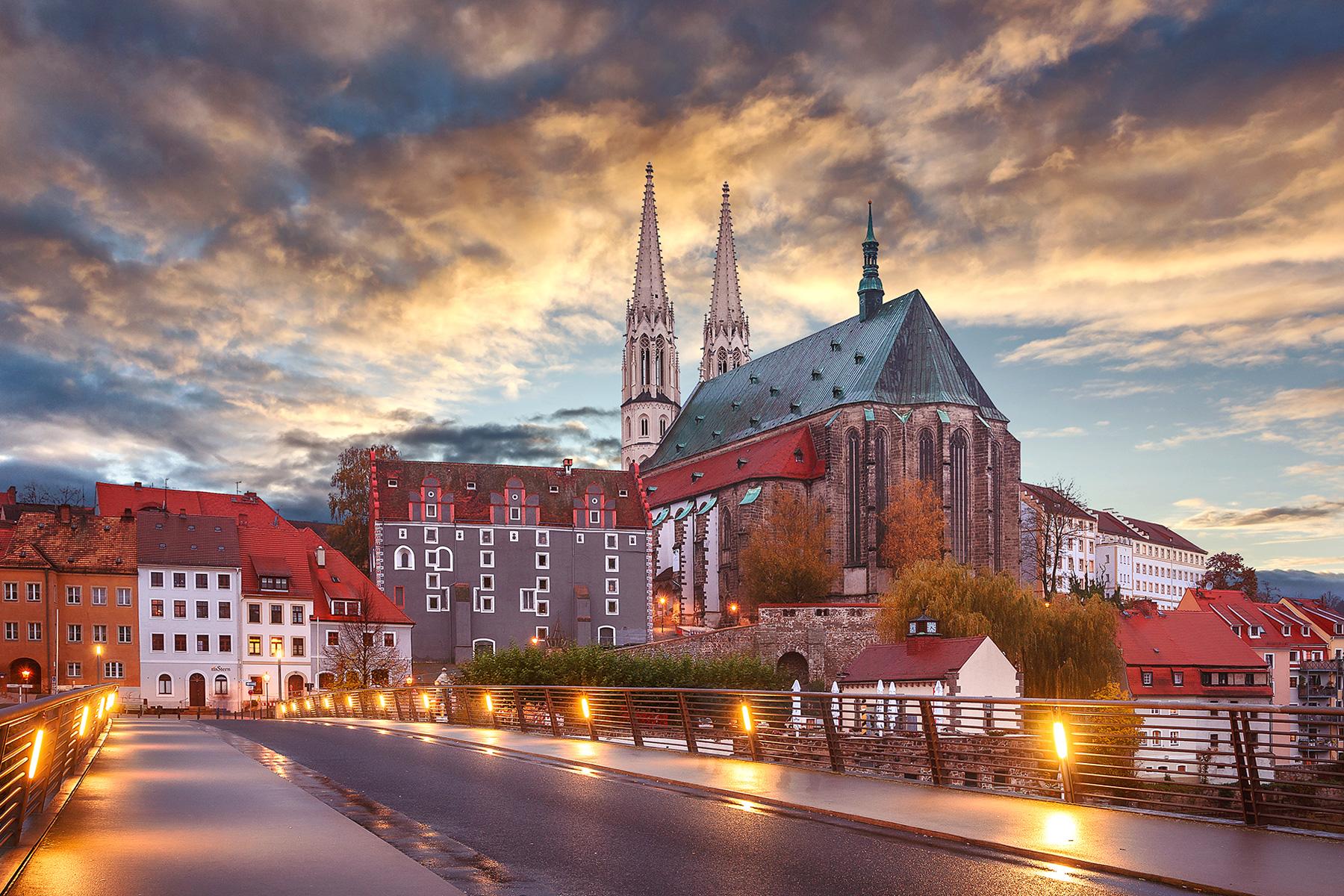 This town in Saxony gained recent fame as the setting for Quentin Tarantino’s Inglourious Basterds and Wes Anderson’s Grand Budapest Hotel. Although the candy-colored hotel is nowhere to be found here; its interior shots were filmed in a shuttered art nouveau department store. Thanks to rising real estate prices in cities like Berlin, though, and visitors looking to experience a bit of film lore, Görlitz has seen an uptick in international interest. Come here for centuries of architecture, including elegant apartment buildings and medieval churches, for glimpses into the lost art and culture of Silesia (a part of eastern Germany that reverted to Poland after the war), and a taste of meaty, rustic German cuisine and Polish favorites like pierogi, only a bridge away (it’s right on the Polish border, with a river separating it from neighboring Zgorzelec). 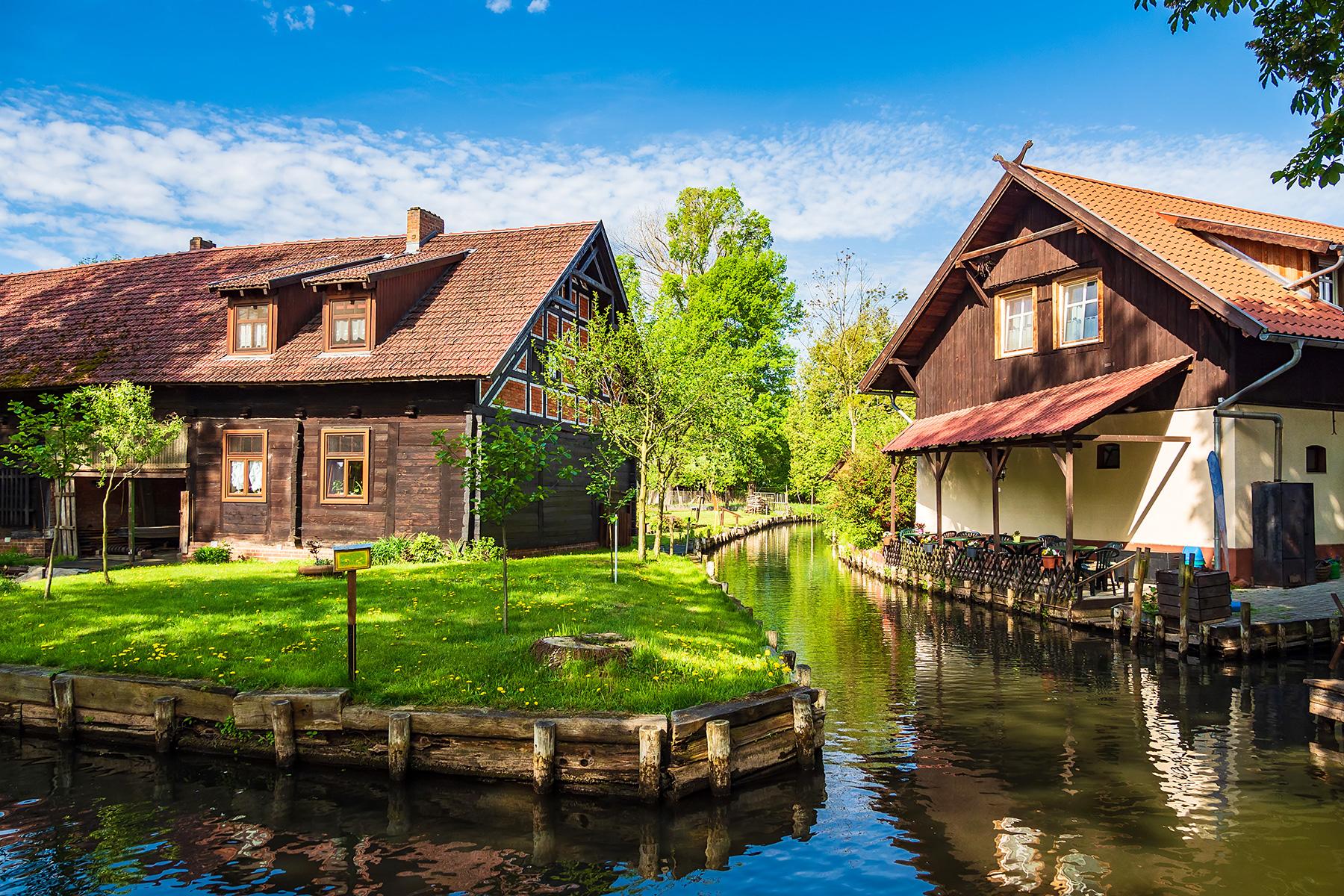 This leafy, dreamy cluster of waterways is about as close as you’ll get to that traditional image of Germany. Cheery villagers sell barrel pickles or sauerkraut, sausages, and traditional Sorbian painted eggs by the side of the road as you get off the train at the two main villages of Lübben and Lübbenau. Boats weave their way under bridges, past flowering meadows and charming country homes, and families sit down to coffee-and-cake hour at cafés in restored Prussian-era buildings. Just south of the German capital and less than an hour away by train, it’s highly accessible as well, which probably makes it such a popular daytrip for German if not international tourists (comparatively few locals speak English). Book kayaks, canoes, or bikes early during the high season, and be prepared for crowds on any nice sunny day in summer. 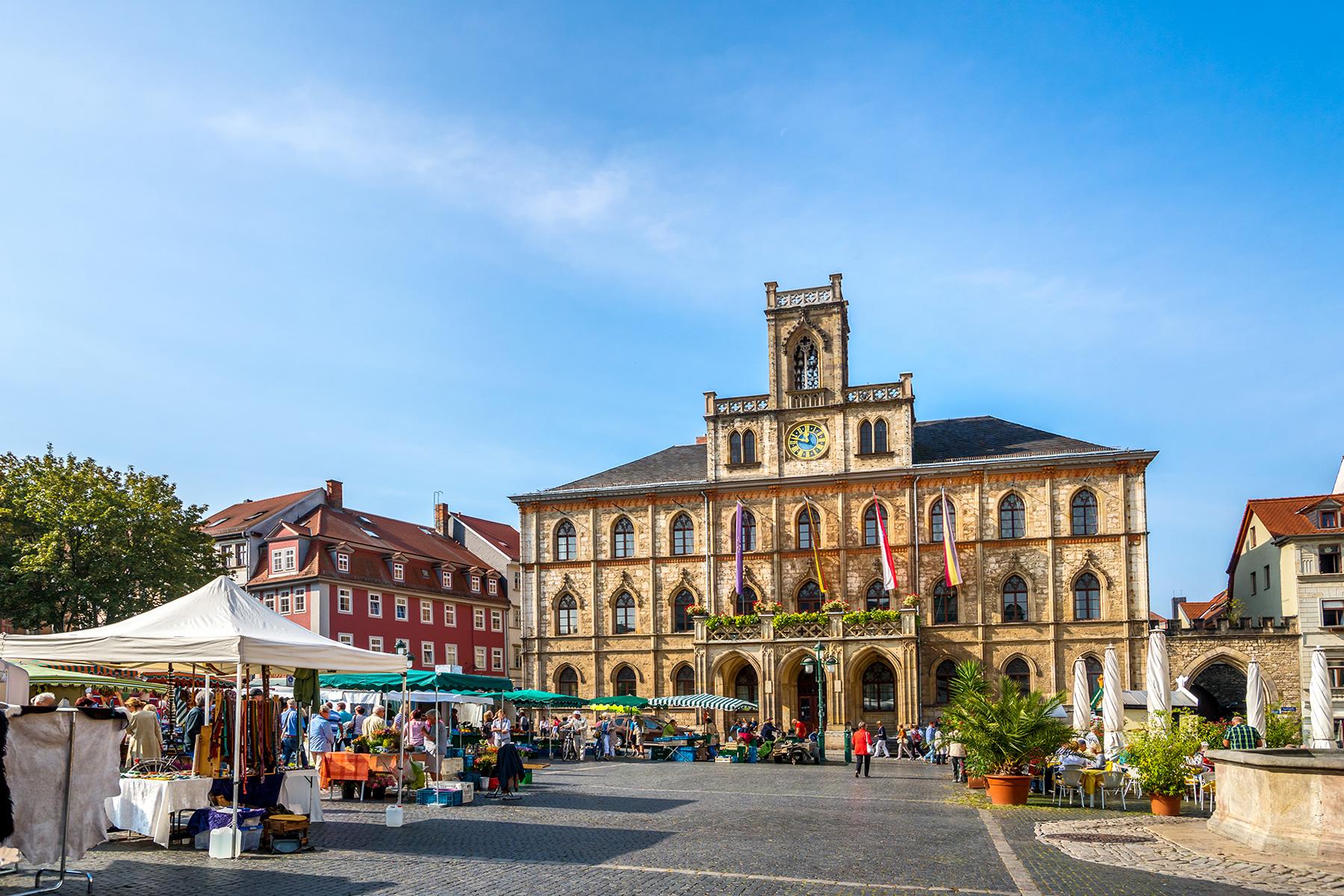 Whether you’re into art, architecture, music, or history, there’s a lot to love about Weimar. It was once home to two giants of German culture – Goethe and Schiller – whose friendly rivalry produced novels, poetry, and plays that would become part of the country’s literary canon. Then there was Franz Liszt, who ended his years of world traveling by moving here to teach and compose, forming a partnership with Richard Wagner. Finally, there’s the Bauhaus movement, founded in Weimar in 1919 and about to celebrate its 100th anniversary, which upended countless aspects art and design, and truly ushered in the 20th century in the process. On top of all that, Weimar is truly a beautiful city, with parks and gardens, picturesque buildings and squares, and the Herzogin Anna Amalia Bibliothek, a magnificent Rococo library so popular its timed tickets are sold out months in advance. 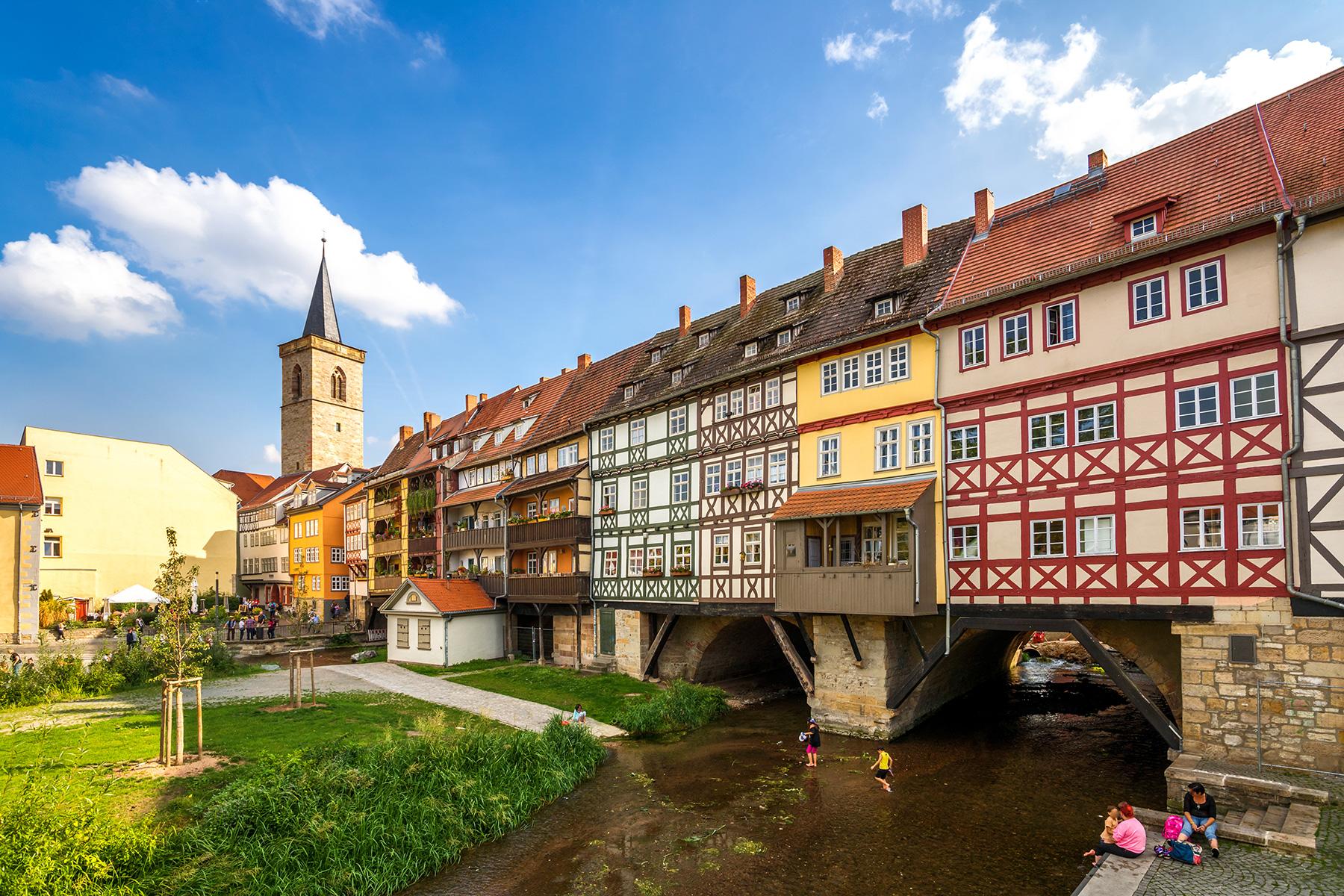 The capital of the region of Thuringia, Erfurt has a lot going for it. There’s its grand Gothic cathedral, several centuries old and complete with original medieval interior, the enormous city fortress Zitadelle Petersburg, the Augustiner Kloster, a picturesque monastery where Martin Luther was a monk in the early 16th century, and the ruins of a thousand-year-old synagogue, possibly the oldest in Europe. Its most Instagrammable sight, however, may be the Krämerbrücke or “merchant bridge,” crowded with half-timbered houses that once made it a major stop along a European trade route. Today, those picturesque buildings are home to shops, ateliers, and even private apartments. After you’re done exploring, settle into an outdoor café in one the city’s many bustling squares, joining locals to catch the late-afternoon sun over a cup of coffee or a glass of wine. 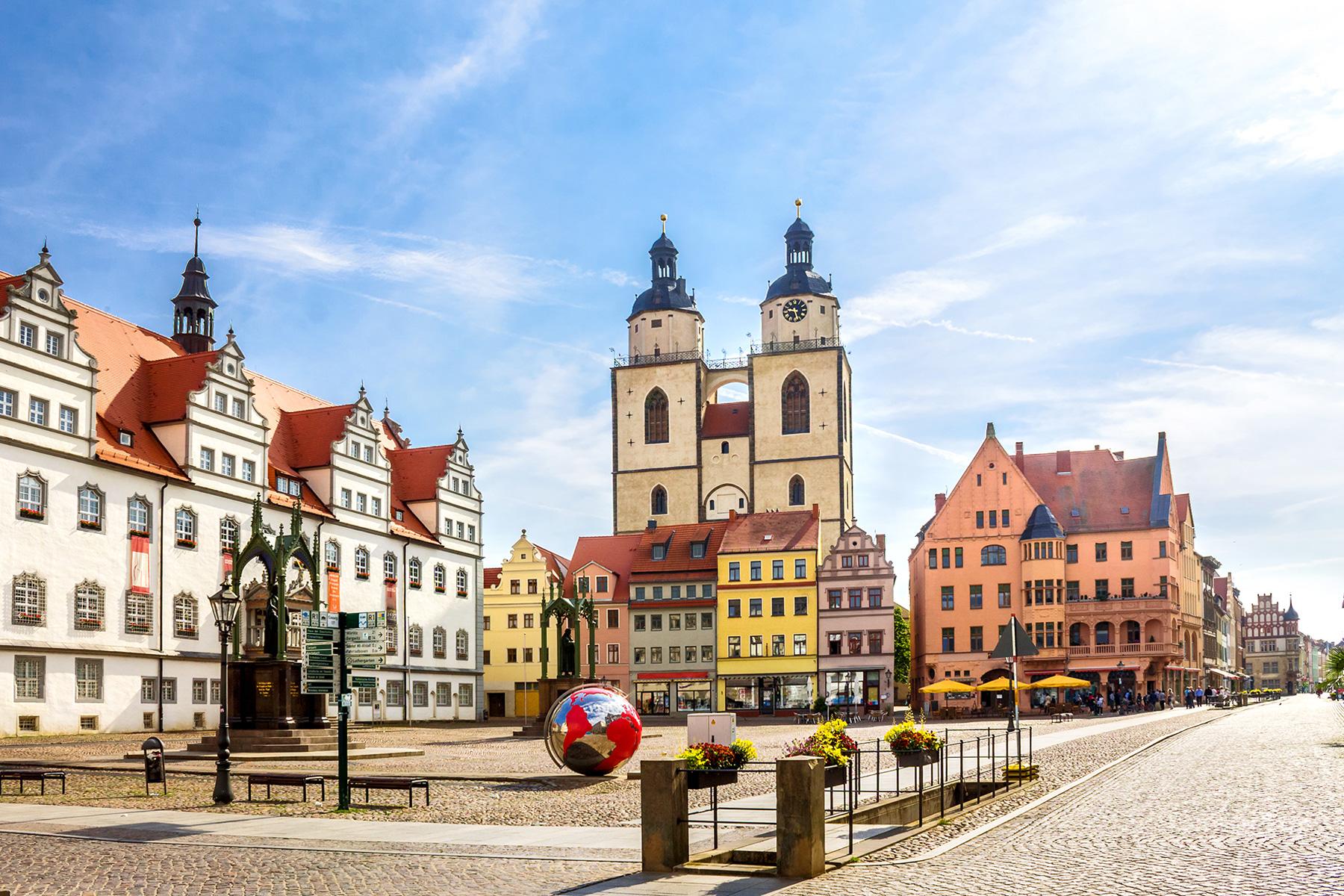 Nicknamed “Lutherstadt,” this town in Thuringia will be forever be associated with Martin Luther and the Protestant Reformation, which he kicked off by nailing his “95 Theses” to the door of the local church. Countless city sights give insight into the Reformation, most of them refurbished or enhanced for its 500-year anniversary just one year ago: You can visit the Lutherhaus, where Luther once lived, to learn about his influence on history and his family life (he was a monk who married a nun – scandalous!), or the Melancthon House, home to another famed German reformer. There’s the Luther Garden with its 500 newly planted trees, and countless memorials to Martin Luther as well. If you’re experiencing religion overload, check out the Hundertwasserschule, a school built according to the plans of the architect who also designed Vienna’s famed Hundertwasserhaus, or the Piesteritz Workmen’s Colony, an early 20th-century housing project. 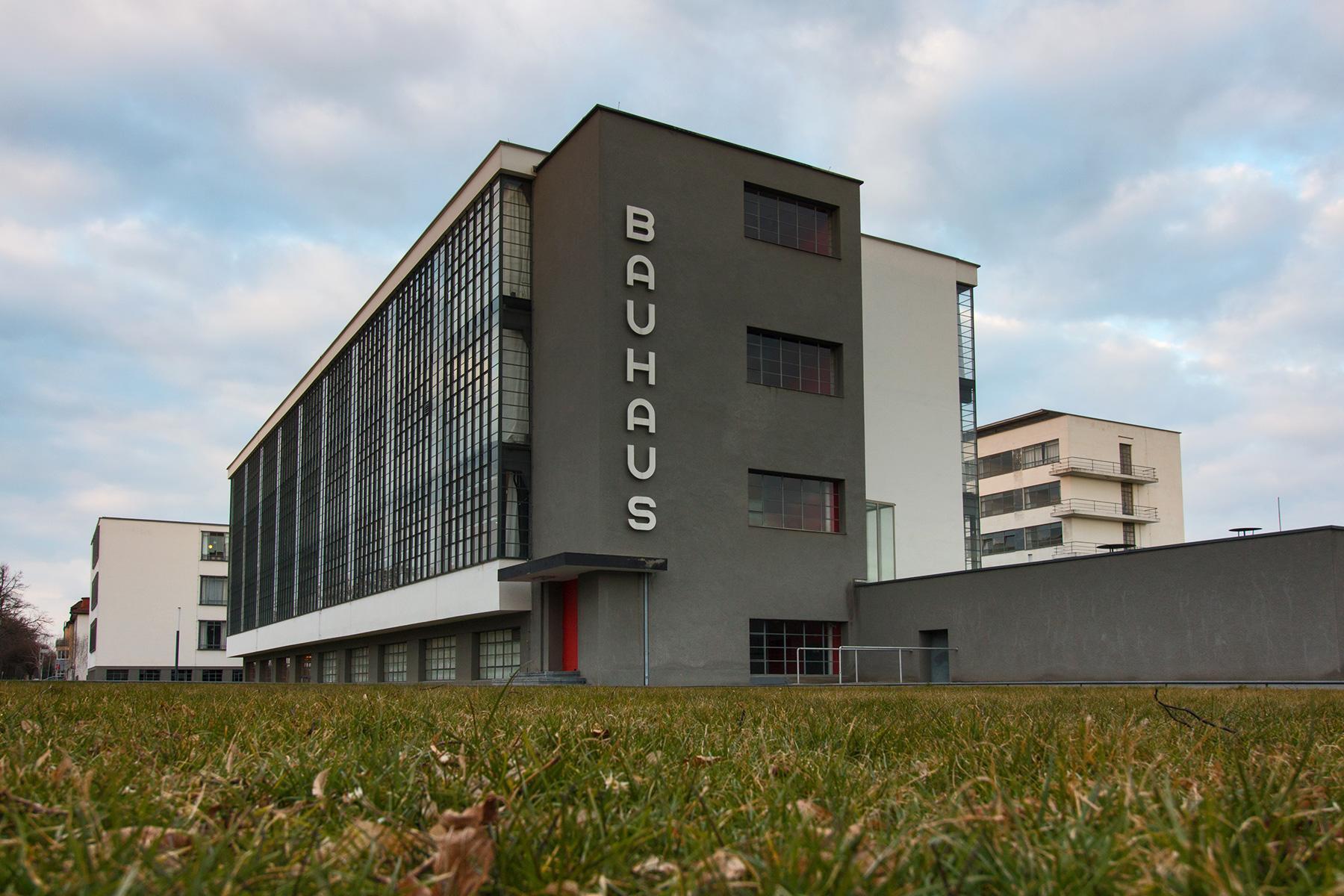 Dessau may not have been the city where Bauhaus was founded (that would be Weimar), but it may be the one most closely associated with the movement, thanks to the iconic Bauhaus building, with its blocky design and striking font on its vertical sign. You can take a tour of the so-called “Meisterhäuser” or Masters’ Houses, where Bauhaus professors lived with their families, or stay a night in the Prellerhaus, where a handful of the original studios have been made into guestrooms. The sprawling green Bauhaus campus is just a 15-minute walk from downtown, and students of architecture still come here from all over the world to study and marvel at a movement that existed for only a few short years, but had a worldwide impact. 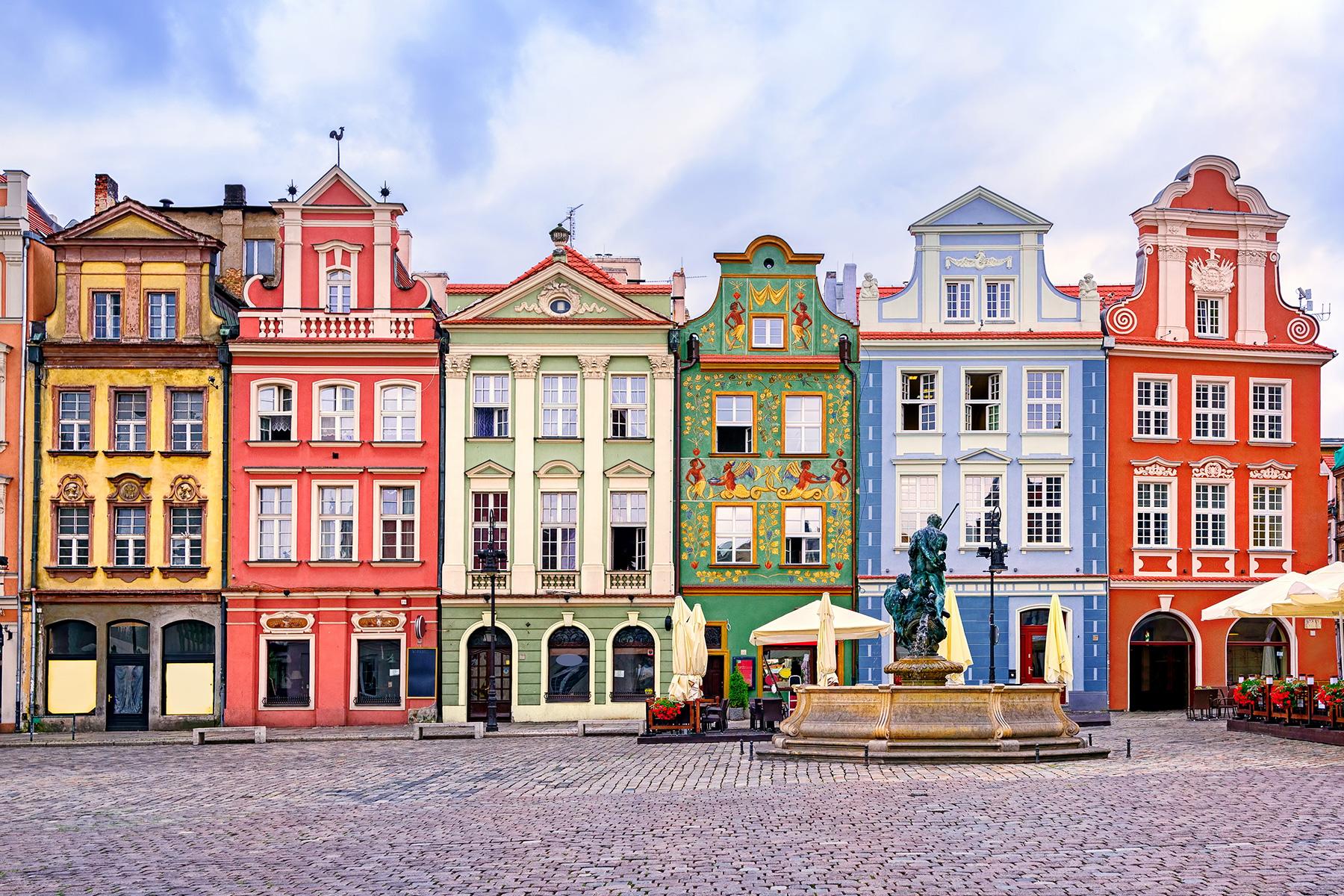 A favorite of Berliners looking for a weekend getaway, Poznan is a gorgeously restored Polish city that can feel a bit like a mini-Prague: the main town square is flanked by colorful and ornate buildings, there’s a Renaissance-era town hall with a clocktower where mechanical animals prance every day at noon, and the old town is full of restaurants serving hearty regional fare, including ubiquitous pierogi, Polish beer brands like Żywiec, and bisongrass vodka. Churches and museums abound, including a striking cathedral on its own island and an imperial castle, but the city also has a thriving contemporary art scene, with plenty of indie galleries. The artificial Lake Malta is lined with early-20th-century villas, and also the setting for the annual Malta Poznan Festival, a celebration of art, dance, theater, and music every June. 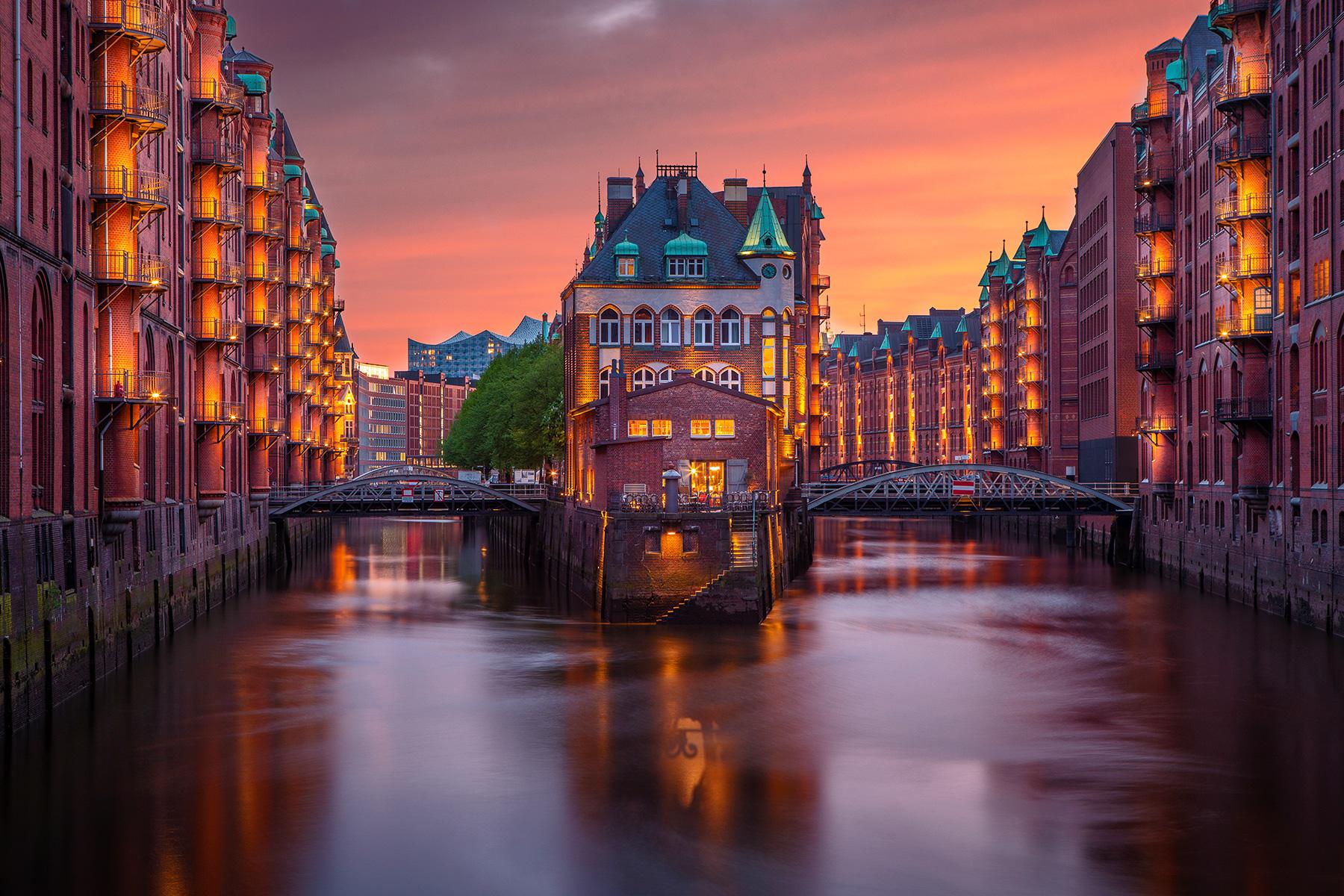 With its elegant town hall, green city parks and lakes, exciting art museums, famed nightlife centered around the notorious Reeperbahn, and large port that has made it a thriving center of trade for centuries, Hamburg is like an alternate reality version of Berlin. It’s enjoyed a healthy rivalry with the German capital for years, but Hamburg has its own personality, so you’d be forgiven for loving both. Just like the German capital, it’s also in a constant state of flux, with new buildings being added, and old ones being repurposed. Check out the sparkly Elbphilharmonie, a striking new waterside concert venue, or the Speicherstadt, an entire neighborhood of century-old brick warehouses, now home to all sorts of businesses, cafes, and restaurants, and even a museum detailing the city’s role in the spice trade.