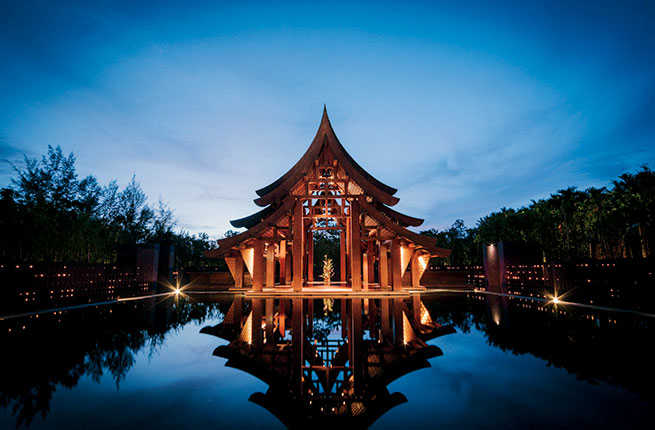 No matter if it’s a comedy or a drama, film directors yearn for a gorgeous setting, scouring locations around the globe in search of the perfect place to bring the crew and cast. For fans, the hunt for these locales can sometimes lead to disappointment when you find out the movie was filmed on a set and the hotel doesn’t exist. But other times, the resorts exist in real life, allowing travelers to check-in for a night and relive the film in real time. From the Caribbean to California, here’s where to slip into silver-screen memories.—Kristine Hansen 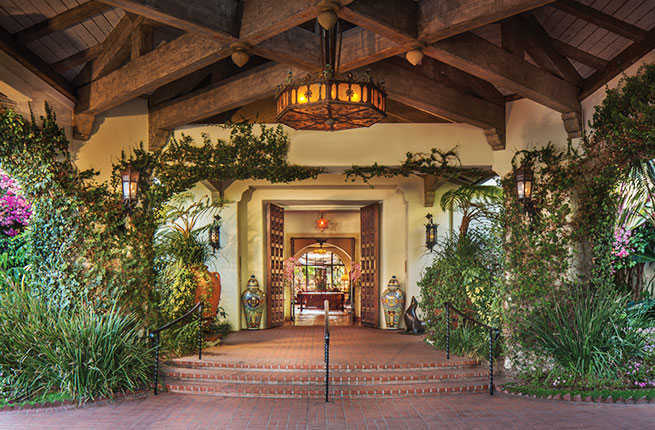 In the rom-com It’s Complicated, Meryl Streep is a frustrated bakery owner having an affair with her former husband (played by Alec Baldwin) and the architect remodeling her house (played by Steve Martin). The lavish Four Seasons Resort the Biltmore—across the street from the Pacific Ocean—figures prominently into the narrative, with the resort’s front driveway and front exterior featured in the 2009 film. It’s Complicated snagged three Golden Globe nominations. 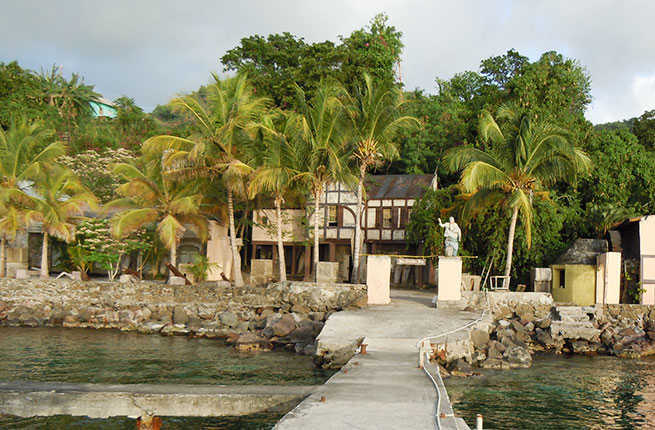 WHERE: St. Vincent, The Grenadines

Where else but the Caribbean would you film a pirate flick? In two films from the Pirates of the Caribbean franchise—The Curse of the Black Pearl (2003) and Dead Man’s Chest (2006)—Wallilabou Anchorage Hotel’s exterior is spotted on the shoreline shots. In fact, the entire faux set—named Port Royal, after the famed pirate town in Jamaica—was built in Wallilabou Bay and the hotel owners preserved the set, turning it into a museum. 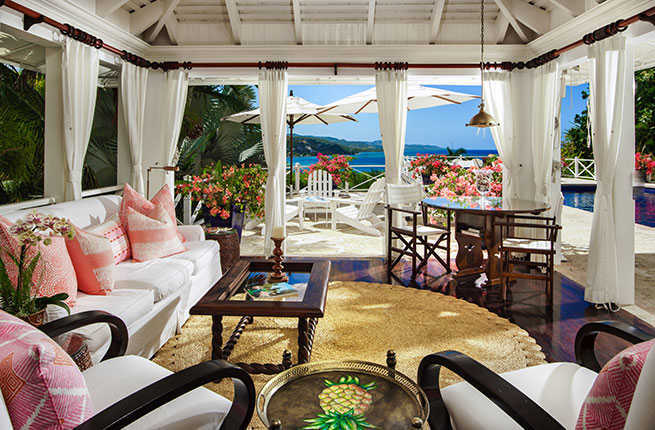 Round Hill Hotel and Villas

In addition to being a celeb magnet for stars on vacation like Julia Roberts and Ryan Gosling, Round Hill Hotel & Villas appears in the 1998 movie How Stella Got Her Groove Back. In the movie, single-mom Stella Payne (Angela Bassett) is wooed by handsome local Winston Shakespeare (Taye Diggs) while on vacation in Montego Bay with her best friend. 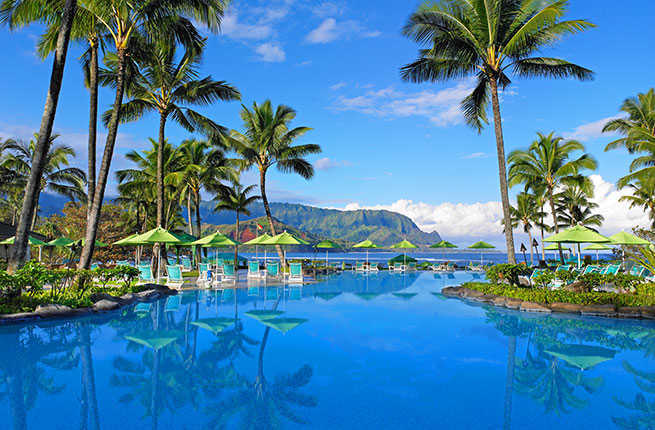 Quite a few scenes from St. Regis Princeville on Kauai’s North Shore appear in The Descendants, which won an Oscar for Best Writing Adapted Screenplay in 2012, based on the novel of the same name by Kaui Hart Hemmings. This includes the resort’s expansive posh lobby; beachfront (with bed-like cabanas), and the ultra-glam Presidential Suite. Explore the coastal-chill scene further in nearby Hanalei, where scenes—many with George Clooney—were filmed at Tahiti Nui restaurant. 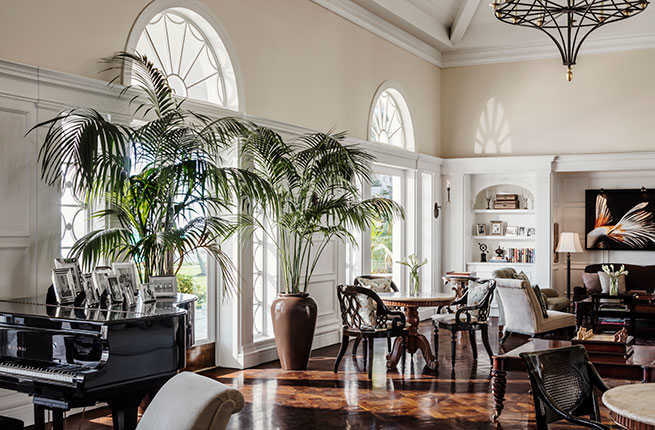 Relax with a book in the Library Lounge at One&Only Ocean Club, one of the film locations for Casino Royale (2006), starring Daniel Craig, and you’ll sit right where he did. If you really want to be like Bond, whip out your wallet and book the four-bedroom Villa Residence, with a retractable wall looking out onto the water. Also spotted in Casino Royale is the resort’s main entrance, which you’ll no doubt recognize upon arrival. 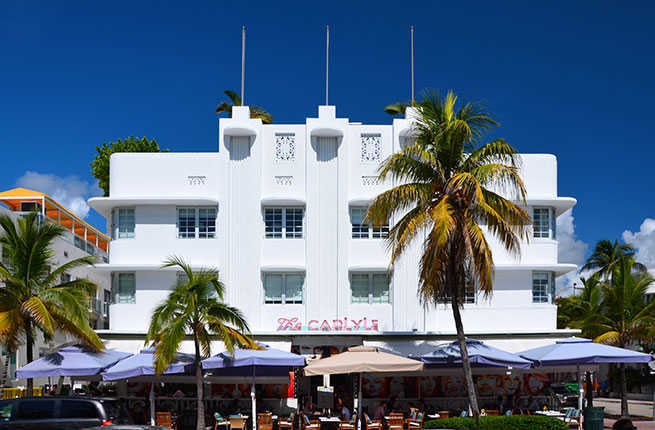 Among the late Robin William’s most memorable performances was as Armand Goldman in the comedic film The Birdcage (1996), where he played the gay owner of a drag club, opposite Nathan Lane. Soak up Miami Beach’s art deco vibes with a stay at The Carlyle, snug on Ocean Drive—this is home to the fictitious Birdcage Club and where the couple lives.

Insider Tip: Although it’s no longer a hotel, residences here are available for rent. 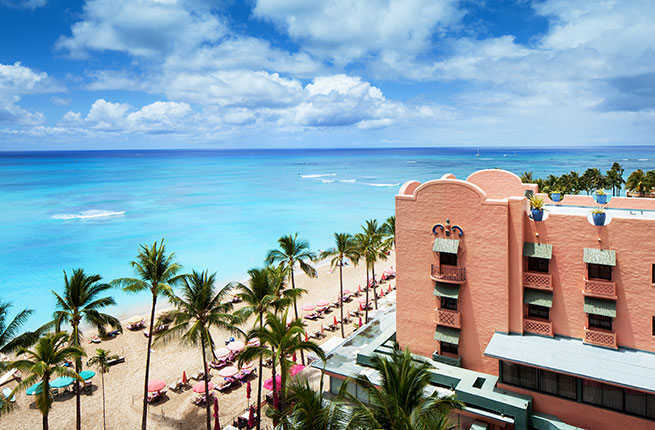 You literally can’t miss The Royal Hawaiian, A Luxury Collection Resort—just look for the hot-pink building on the ocean side of Waikiki Beach. The 90-year-old luxury property has hosted many movies on location including, most recently, the biopic Big Eyes (2014) by Tim Burton about American artist Margaret Keane. In one scene, the characters sip cocktails at the very pink hotel bar. 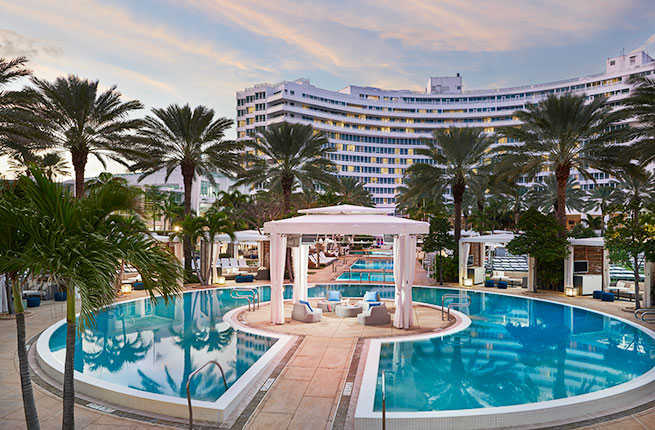 Who could forget the dynamic duo of Kevin Costner and the late Whitney Houston in the romantic thriller The Bodyguard (1992)? Bunk in what is now Fontainebleau Miami Beach’s Le Ciel Presidential Suite (with a sweet ocean-view terrace), where part of the movie was filmed. The resort’s pool and ballroom also appear prominently in the film. 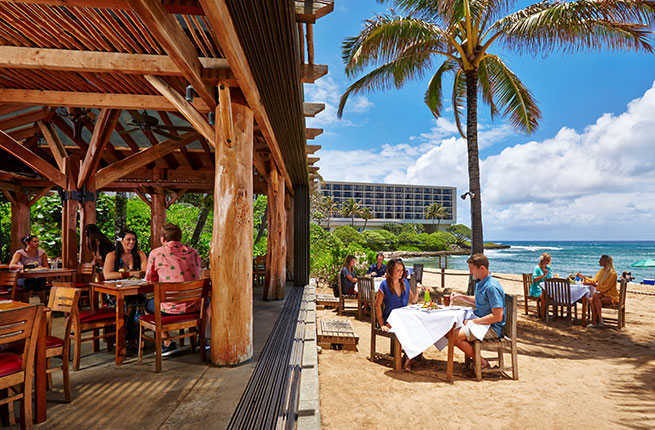 Nine years ago, comedian-stars Kristen Wiig and Russell Brand descended upon Turtle Bay Resort, the setting for Forgetting Sarah Marshall, a movie about a guy who tries to get over his girlfriend by fleeing to Hawaii—only to spot her there with her new guy.

Insider Tip: Mike and Dave Need Wedding Dates, starring Zac Efron and Anna Kendrick, is the latest comedy to shore up this coastal setting. In that movie, the resort’s guest rooms, the beach area, banyan-tree grove and pool are seen. 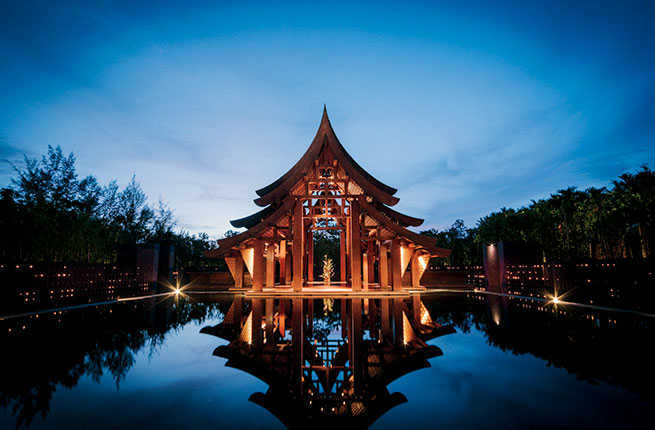 Ever since Leonardo DiCaprio starred in The Beach in 2000, Thailand’s beaches have been hot filming spots. This includes The Hangover Part II (2011), a comedy where four dudes (including Bradley Cooper) travel to Thailand for their buddy’s wedding. The nuptials take place at the luxe Phulay Bay, A Ritz-Carlton Reserve, which was the first Ritz-Carlton reserve property (others are now in Dorado Beach, Puerto Rico; and Ubud, Bali).