When You Wish Upon a Starboard: A Disney Cruise for All Ages 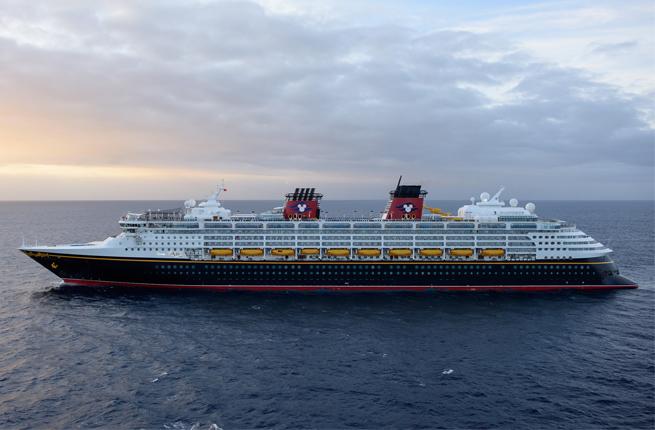 The true magic of a Disney cruise lies in the details and story on board each ship. The focal point of the atrium of the Wonder is the bronze statue of Ariel. It’s the perfect place for pictures and Ariel is the ship’s unofficial mascot. You’ll find references to the mermaid and ocean throughout the ship. The new chandelier in the atrium is inspired by the flower in Ariel’s hair; the decor and design in the After Hours section of the ship takes inspiration from the sea. Look down and you’ll see circles reminiscent of sea bubbles in the carpet. Disney sketches and illustrations adorn the walls on stairway landings. You can find hidden Mickey Mouses throughout the ship. The Crown and Fin is an adult lounge modeled after an English pub. If you look at the decorations carefully you’ll find nods to English Disney movies.

Storytelling is especially apparent in the three main restaurants on board the Wonder. Disney Cruise Lines employs rotational dining where guests and their servers rotate to a different restaurant each night. Each restaurant has a unique identity and it’s fun to experience each one.

At Triton’s, you’re under the sea to feast on American and French fare. There’s a large mural of Ariel and her father Triton on one wall and sea-inspired flourishes throughout.

Tiana’s Place is new to the Wonder and transports guests into Tiana’s restaurant from The Princess and the Frog. The attention to detail in this restaurant is amazing: from the frogs and lily pads on the light sconces to the menus—a button in the corner of the dessert menu makes the lightning bugs on the cover blink—there is enough detail to keep you entertained for more than one meal.  Pay attention to the china—by the time dessert rolls around the frog on the plate has earned his crown and become a prince. There is live jazz music and Tiana makes the rounds ensuring that everyone is enjoying themselves. 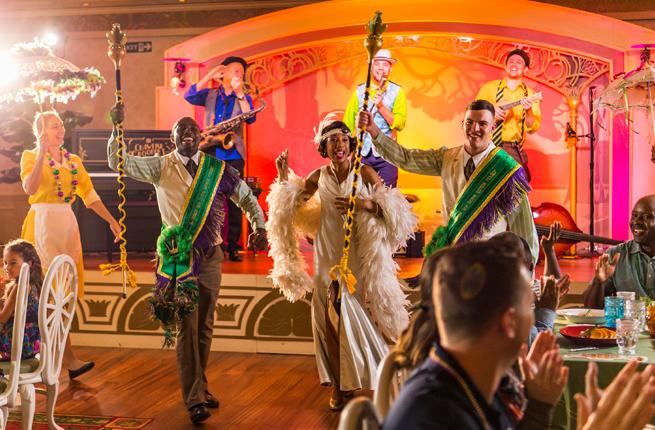 Kids will love Animator’s Palate. The walls are adorned with sketches of favorite Disney characters (the Wonder has even been updated to include Maui and Moana) and screens showing progressive clips of classic Disney animation. When you sit down you are presented with a placemat-sized piece of paper with instructions on how to draw your own character. Servers collect these characters before dinner and your character becomes part of the animated show presented before dessert. Kids squeal with delight when they see their characters dance by. Everyone gets her character back at the end of the night with an Official Disney Animator seal. It’s a unique souvenir from a cruise.

Once kids visit the Oceaneer Club, they will never want to leave. It was completely reimagined and benefits from new storytelling. There is something for children of all ages. Club Disney Junior gives children the opportunity to interact with Doc McStuffins, Princess Sophia, and other Disney Jr. stars. The room changes based on which character is there interacting with the children. Andy’s Room gives kids plenty of space to run around and climb on Andy’s bed. There’s even a slinky dog slide. There is also an interactive screen.

Kids will love Wandering Oaken’s Trading Post. There are scavenger hunts, games, an iPad station, and an activity table. Plus Anna and Elsa stop by. The kids get to participate in a coronation day celebration.

If your kid likes superheroes, you will have to drag him out of Marvel’s Superhero Academy when it’s time for dinner (or if you actually want to see your child while on vacation). Each member of the Superhero Academy is given a superhero ID—they get a photo and a superhero name—and training on how to be superhero. Captain America, Spiderman, and Black Widow come in and tell their origin stories and train the academy members. Kids learn that they don’t have to be super to be a hero. Captain America teaches courage, teamwork, and inner strength; Black Widow, perseverance. There is a display of superhero relics and interactive games where prospective heroes must decipher coded messages. And every child (and adult) will be lining up for the exclusive video game. Avengers Assemble is only available onboard the Wonder. It’s a motion capture game where participants must duck, swerve, jump, and move their arms to protect a city from attack. It is extremely active. The Oceaneer Club is open to everyone during an open house on the day of embarkation, so make sure you stop in then if you’re over 12. It is definitely worth it. 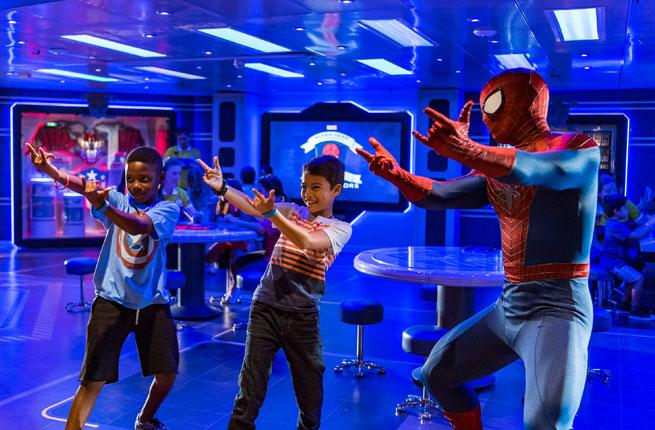 Disney is a leader in traditional show entertainment at sea. And the new Frozen: A Musical Spectacular does not disappoint. It translates almost seamlessly from animated film to live stage production despite the fact that one of the most beloved characters—Olaf—is a snowman. Puppetry ensures that we still get everything we love out of Olaf, Sven, and the trolls. Puppets are also the solution to young Anna and Elsa. The sets and special effects are impressive. Laser effects and video projection turn the whole theater into Elsa’s ice castle during “Let It Go” and it even snows on the audience. Disney Dreams and The Golden Mickeys are impressive and entertaining Broadway-style stage shows. The two shows touch on just about every Disney movie and audience members sing along with their favorite Disney songs. If stage shows aren’t your thing, movies play regularly in the Buena Vista Theater. You can see the newest Disney and Marvel movies while they’re still in theaters. 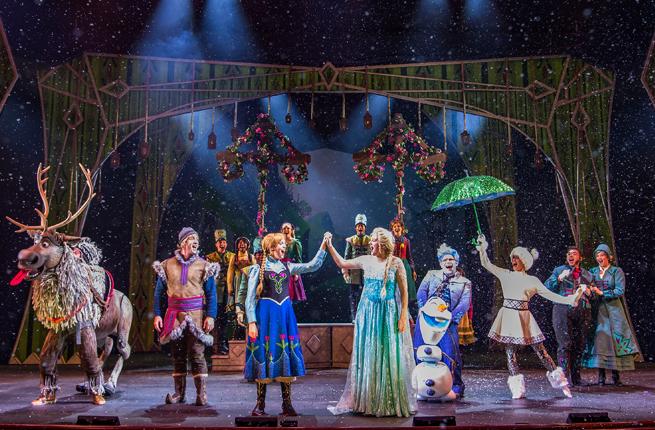 Disney is the only cruise line to have fireworks at sea. Pirates in the Caribbean is a deck party at Goofy’s pool. The party is aimed at families with children, with games and appearances by Mickey and crew, but the whole ship gets into it. Some guests have some impressive pirate gear. The party ends with Mickey saving the ship from pirates and then what everyone has been waiting for: fireworks! If you want to see the fireworks but want to avoid the crush of hook-wielding, eye-patched children, the best place to see them is mid-ship on deck 10. You can watch the party from above and have an unobstructed view of the fireworks. The pirate theme bleeds into the rest of the ship that night as well. The dining rooms serve Caribbean-inspired dishes and the pirate-attired servers lead guests in a limbo contest before dessert.

What is a Disney trip without meeting Mickey and friends? You can meet your favorite characters on board. Princesses make daily appearances in the atrium and Mickey, Minnie, Daisy, Donald, and Goofy are at all deck parties. A schedule of character appearances is on every daily Navigator making it easy to schedule your day around getting Goofy’s autograph. Make sure you make a reservation online before you sail if there is a character you really want to meet. Lines can get pretty long and some characters (especially the princesses) do require reservations. 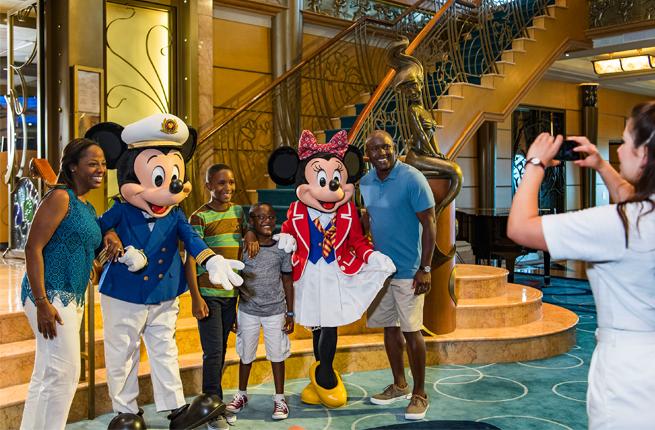 Whether you are a lifelong lover of all things Disney or a skeptic coerced into a Disney cruise, relax, embrace your inner 10-year-old, and let the magic and storytelling Disney is known for do its work.