For a travel writer on assignment, the mountains of Southern Peru became a forced shelter during the global Covid-19 pandemic. Unfortunately, he’s not alone.

When they told us that the country would shut down for two weeks, we couldn’t predict how bad it would be.

“It’s hard,” said the general manager of the Colca Lodge, a resort in Yangde, a beautiful mountain village in the Colca Canyon region of Peru, near Arequipa. “Today we got close to 200 cancellations, and we may be forced to close down for the next fortnight and lay off staff as there’s no business,” he said on March 14 as Peru announced its imminent lockdown.

The news sounded pretty serious, but not like the semi-catastrophe we are stuck in now. My wife, who is Malaysian, and I had been traveling in South America since December 2019. When we landed in Buenos Aires and started moving around Argentina, the only bad news in the region was related to the political unrest and riots in Chile and Bolivia. COVID-19 was not even a thing back then—we learned about it only weeks later into our trip, when the virus started ravaging China.

As we crossed from Northern Argentine Patagonia into Chile to make our way north to Bolivia and Peru, the tales of infected Chinese cities, military lockdowns, and high numbers of casualties had just started to appear on our newsfeeds. The contagion looked unbelievable—but at the same time, South America still seemed very welcoming and safe.

Locked Down in Peru

We kept moving north and entered Peru on February 23 so we could start working on updating a chapter of Fodor’s Essential Peru guidebook. It was while we were there that they announced, on March 14, that the country would be locking-down. We were still visiting properties and jotting down the last notes in the Colca Canyon region.

Essentially, the Peruvian government announced that starting March 16, the country would go into a preventive lockdown to block the spread of COVID-19. All land, maritime, and air transport would be grounded to a halt starting March 15 at midnight. We were traveling in a well-known but remote region, a five-hour drive away from both the city of Arequipa and the closest international airport, and we didn’t know what to do.

Peru’s capital, Lima, is another 17-hour drive from Arequipa—a distance we could not cover before the country closed. We also thought that Lima, which holds 50% of Peru’s population and the majority of the country’s COVID-19 cases, would have probably been the worst place to be in terms of contagion risk. Not only that, but it would also be a nightmare to navigate around the huge number of foreigners who, on those last free days, were trying to get on the last outbound flights home.

As I still had to finish part of my assignment in the village of Cabanaconde, I quickly decided to catch one of the last available buses and hide out in this mountain town set at 3,280-meters above sea level. We thought it could be our safest bet in terms of distancing ourselves from others, being able to find fresh produce, finding accommodation options, and using some essential Internet connectivity that other villages in the canyon lacked.

What we didn’t know, however, was that Peru takes a lockdown very seriously. On the morning of March 16, we quickly learned that we were stuck in Cabanaconde. No wheels could move–there was no form of public or private transportation allowed to leave without a police permit.

At first, the state of lockdown was set until March 31. A couple of days before the supposed end date, we all found ourselves waiting anxiously around the radio to listen to President Martín Vizcarra’s speech. Our hearts sank when he announced an extension on Peru’s lockdown until April 13. In that moment, I realized that maybe I hadn’t made the best decision, as the few flights were only scheduled out of Lima, and the nearest embassies were in Arequipa.

We Are Not Alone

The sudden closure of Peru on March 16 caused issues for many other travelers throughout the country.

“LATAM told us that we were at risk to be stranded in Chile, so we waited to change our flights,” said Australian native Byron Barreto, who is now stuck in Peru with his wife, away from their children. He also said that some Australians managed to get repatriated by a private company called Chimu Adventures. The company offers charter flights that cost $5,160 per seat, a price that Barreto couldn’t afford.

Rhys Mehlstaubler is another Australian backpacker stuck in Northern Peru. Mehlstaubler feels more fortunate than the many other travelers who are stuck in Lima or Cusco, and not allowed out of their hotel rooms.

“I am surrounded by amazing people in a remote part of the world with the ocean as our backdrop. We accept the situation and make the most of it by channeling energy into group activities, reading, fitness and learning Spanish,” he explains. Mehlstaubler actually applauds the Peruvian Government’s actions, for he believes the Latin American nation is doing a much better job preventing the spread than his own country. Despite his nod to their government, he still doesn’t know when he will be able to go home. 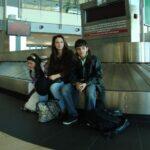 Our Life up in the Mountains

Though the rigorous Peruvian lockdown will hopefully help the country reduce the spread of the virus, being locked up far away from home remains a testing experience both for the body and the mind. Every day, we listen to the local radio, trying to ascertain if there is any good news. It is, unfortunately, arriving slowly.

Our daily routine is akin to living in a happy jail without bars: we wake up early in the morning to stretch and enjoy some hours of sun on our hostel’s terrace and then cook a simple breakfast. There’s only a small group living here at Mirko’s Home with us: the owner of the building, the hostel manager Mirko, and his two Chilean volunteers, who, like us, are now stranded here.

What we didn’t know, however, was that Peru takes a lockdown very seriously.

We all share a flimsy Internet connection from a mobile phone’s hot spot—our only means of communication with the outside world. That connection is how I keep in touch with my brother, my only family member left in my homeland of Italy. In further tragic events, both my parents back home passed from coronavirus three days apart from each other. Being stuck here, I couldn’t return to see them for the last time, and now I am forced to cope with this loss as I try to get by day after day.

Back in Cabanaconde, the police control in this small town is not as strict as in the cities where there’s a very strict curfew from 6 p.m. to 5 a.m., and soldiers stand on street corners screening anyone who dares to venture out to buy food supplies. We are spared the army presence: we can walk a couple of hundred meters away to the main Plaza de Armas (the main square) to buy food supplies. That food, luckily, is always available, because it comes straight from the surrounding fields. The locals are a bit afraid whenever they see us coming, though. They give us plastic bags filled with produce while keeping a distance and open up to talk only to the few tourists who, like me, have enough Spanish to engage in conversation.

“We don’t have to be afraid,” Elsa, one of the vegetable sellers, told me as she pointed at a video of a man talking on her phone’s screen. “Fear lowers our immune system. I trust this doctor’s advice,” she told me with a smile. I grabbed my food and left smiling. Like Elsa, I’m also not afraid of the virus: my fear, to be honest, is not knowing when, and if, we’ll be allowed to leave Cabanaconde.

Sorry to hear. I’m sheltered outside of DC and was supposed to be in Spain right now.  Probably your story barely begins to communicate the dire situation. Stay well.

My condolences on the deaths of your parents -- it's awful to be stuck so far away when something like that happens.  I hope you stay healthy and are able to return home within a reasonable time.