With 'Cats' the movie in theaters December 20th, let's take a moment to reflect on how utterly insane the original Broadway production was.

Editor’s note: This article was originally published on December 11th, 2017.

If you had asked me last week what the plot of Cats was, I would have said that it’s about a bunch of glamorously feral cats who are going to get evicted from their garbage patch but somehow prevail to keep their home. This was the impression it made on me 25 years ago as a five-year-old, but it is not at all the plot of Cats. In order to keep the memory of this show alive for my childhood self, I refuse to research what actually happens during this show, because it is totally, utterly, absolutely bonkers. 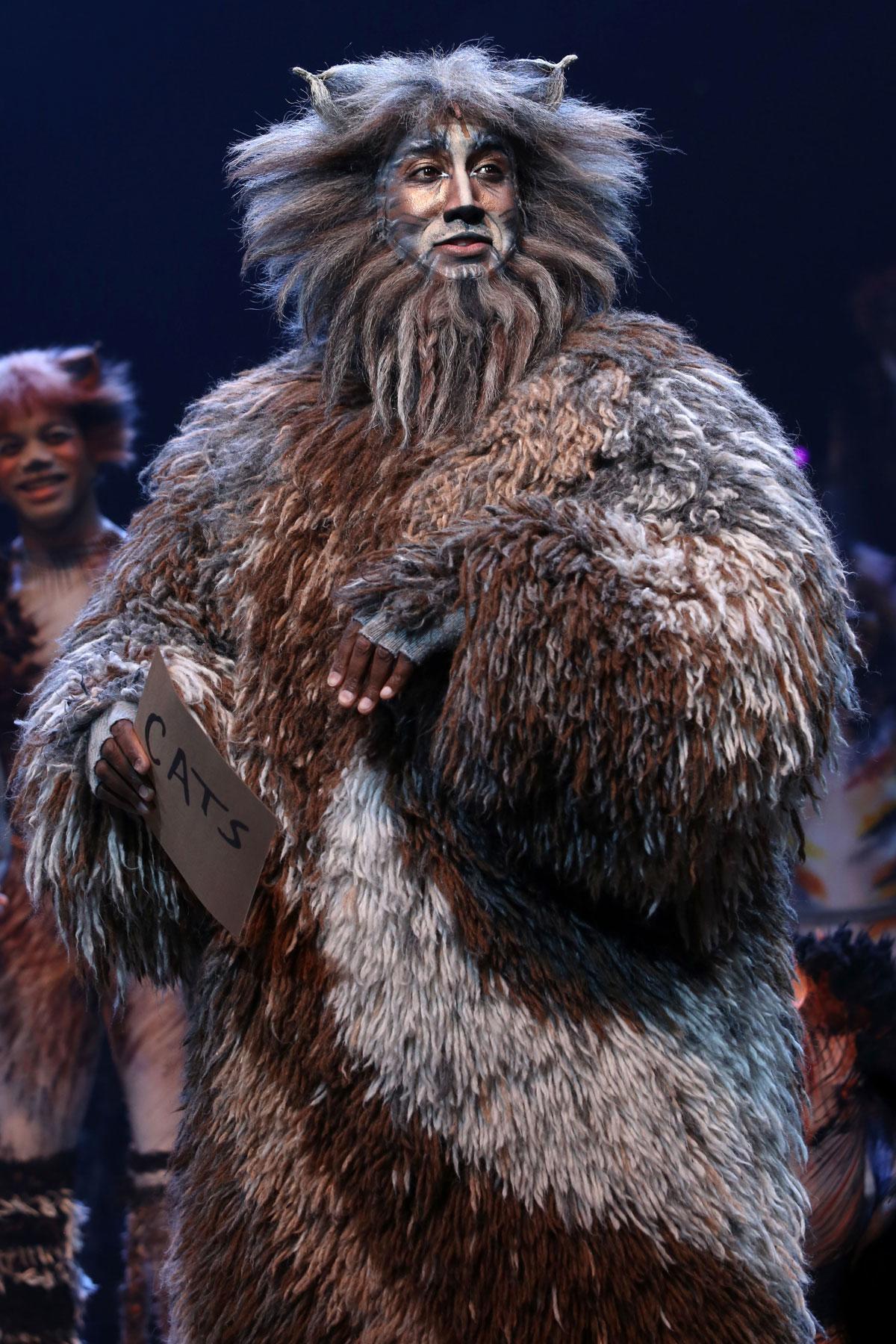 Let me set the scene for you (literally). The stage is indeed a garbage pile. The set is reminiscent of the vacant lot behind my first New York City apartment, where a group of small kittens (who eventually turned into terrifying wild cats, but not Cats) policed a haphazard garbage pile where we would leave our refuse. This junkyard on stage is similar, full of trash of improbable and inconsistent sizes. There’s an oven as tall as the Cats, and a shoe that’s bigger than the oven. There’s a tire that will turn into a spaceship in the final act and a cluster of string Christmas lights overhead that gives a bohemian feel. The floor is painted to look like a newspaper and the whole thing feels sort of like my college dorm room after that time we decorated all the light fixtures with vodka bottles and fishnet tights.

They call themselves Jellicle Cats, and they prance around the stage in spandex bedazzled Cat costumes and wild poofy hair that has been tamed into “ears,” doing a sexy sort of Cat ballet, all the while decrying that they are “metaphorical Cats, hypothetical Cats!” What?

In the opening number, the Cats slink onstage and start to introduce themselves in Andrew Lloyd Webber rock opera falsetto. It’s delightful but confusing. These Cats, it seems, are stuck in a dystopian London garbage heap, suspended in purgatory between their nine lives, waiting to ascend to their next life. They call themselves Jellicle Cats, and they try to explain what that means in a song, but it’s very hard to understand what they’re saying. While singing this song, they prance around the stage in spandex bedazzled Cat costumes and wild poofy hair that has been tamed into “ears.” They do a sexy sort of Cat ballet, all the while decrying that they are “metaphorical Cats, hypothetical Cats!” What? There is a lot of un-Christian hip movements and innuendo.I’m just going to tell you now–there are no lines in this play. It is a Cat opera and every thought, feeling, and word is either danced or sung.

From what I gathered, the Cats are here today for a Cat Ball, where they will find out which one of them will be chosen to leave purgatory and return to life. For the next hour and a half, all the Cats are introduced with an elaborate song and dance that is possibly (?) their audition for the afterlife. There’s a cat who looks like a drag queen doing a David Lee Roth impression. Another, of whom everyone is afraid, is named Grizabella the Glamour Cat. There’s a very fat Cat and two acrobatic bandit Cats who do impressive gymnastics. There’s a very old and important cat named Deuteronomy who seems to be in charge. He’s wearing a shag carpet with shags that are at least a foot long. The plot begins to unfold–I think–as the other Cats announce that this respected elder Cat will choose one of them to be reincarnated and leave purgatory for their next life.

When intermission rolls around, it’s still unclear as to what is actually happening in this show. At the bar, there’s a choice between a literal $37 glass of wine or a more reasonably-priced (for New York, at least) $12 “Jellicle Juice” that is, improbably, made with coconut rum.

Act two entails, yup, more Cat introductions. This time, there’s a Railway Cat who comes on stage for an elaborate performance and is never seen or heard from again. The lights pop and spooky music plays to introduce a cat named Macavity, who is a criminal. He does an improbable ballet fight and attempts to rape one of the lady Cats. Mr. Mistoffelees is summoned to save the day, and it seems he’s a magician of sorts, dressed like Sigfried and Roy at Burning Man. He can control the lights and he uses his powers to flash the overhead string of Christmas lights in a rainbow frenzy. This is where the acid would really kick in. Mr. Mistoffelees is so impressed with himself for saving the day that he leaps into Deuteronomy’s arms and Deuteronomy cradles him like a baby kitten, which might have been the highlight of the show. It was adorable. 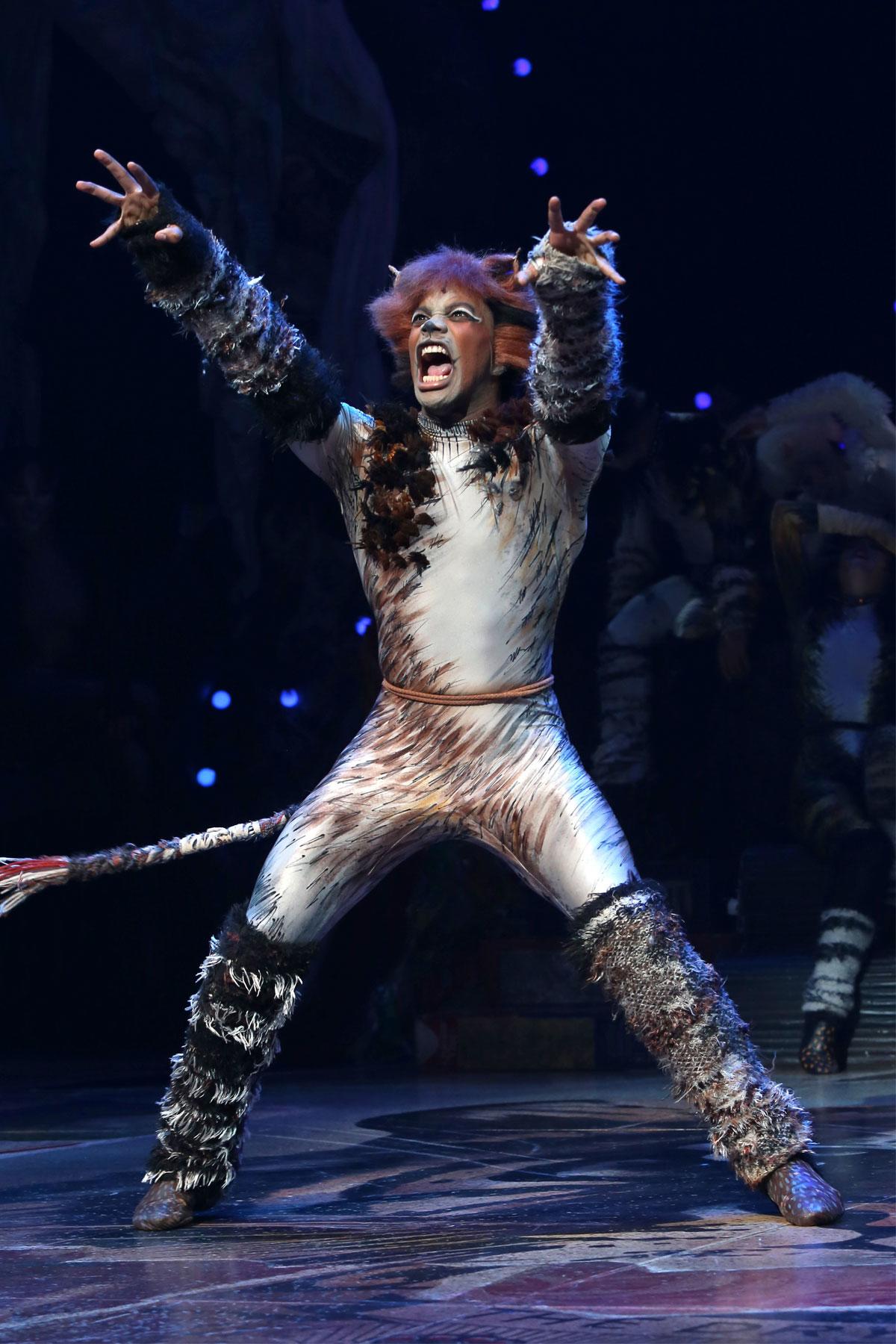 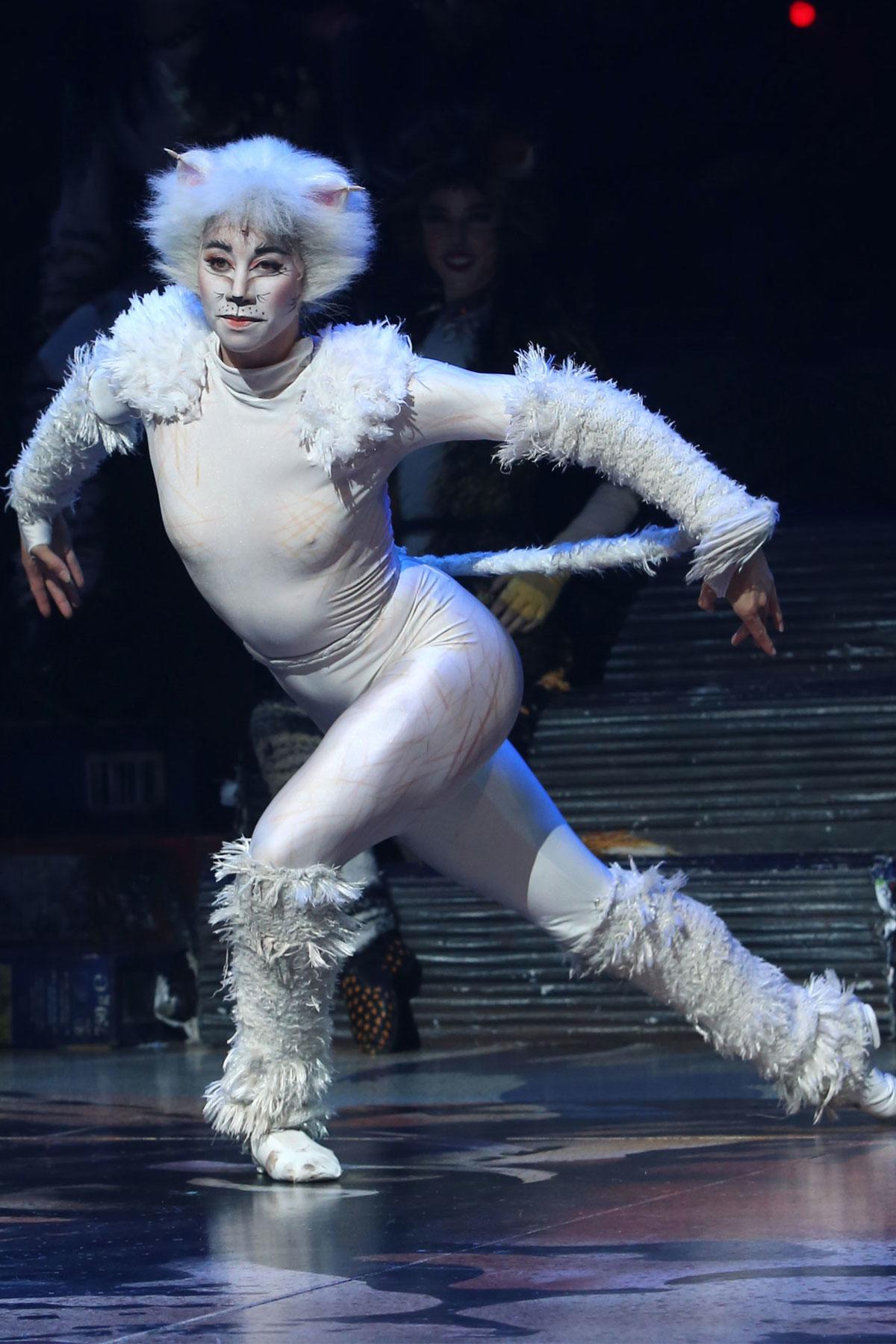 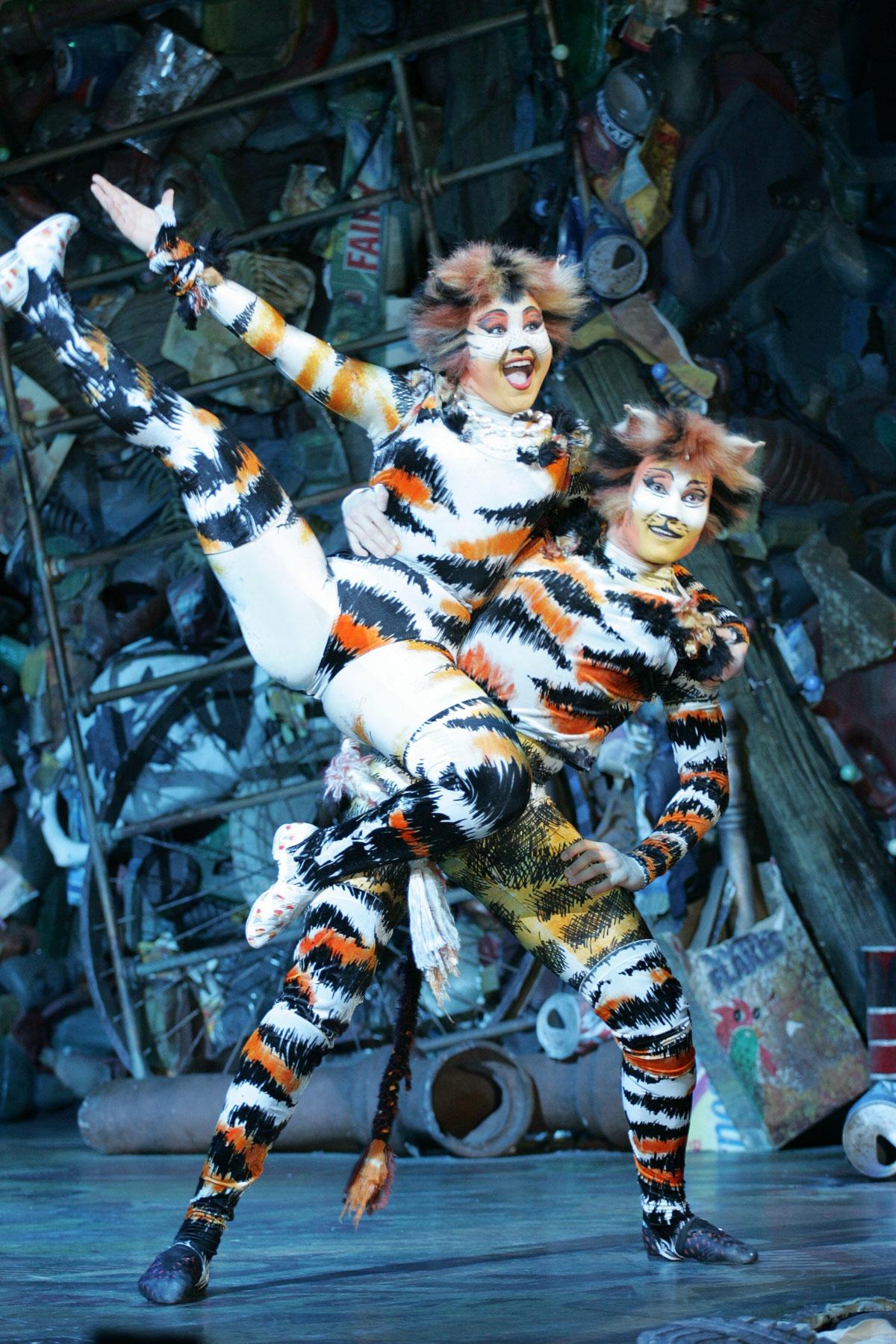 Grizabella the Glamour Cat creeps on stage again. The other Cats are still afraid of her, but she woos them with a song: “Memory,” which is a song I promise you know. Barbara Streisand sang it in 1982. Grizabella sings hard, the kind of glass-shattering volume you think about when you think about Broadway. It gave me goosebumps. After this song, Grizabella has won the hearts of both the audience and the Jellicle Cats.

The play is winding down, and since nothing has actually happened, something has to happen.

The play is winding down, and since nothing has actually happened, something has to happen. Shaggy Deuteronomy chooses a Cat to reincarnate. He climbs up on to a tire to announce the winner and it’s (obviously) Barbara Streisand Cat. She is helped on to the tire, which begins to rise off the ground, blue smoke pouring out. This moment is the only thing I remember (besides being amazed and terrified by the Cats scampering up and down the aisle) from when I saw the show 25 years ago, although I didn’t remember that I remembered it until I saw it again. Deuteronomy and Grizabella are on their floating tire while the stage is bathed in smoke and blue lights, and the power chords of Andrew Lloyd Webber are reverberating around the theater. It is the stuff that dreams (or nightmares) are made of. Grizabella levitates from the tire and is lifted into the heavens, just as daylight breaks and the rest of us garbage Cats are stuck in this purgatory junkyard we call life. The show is over.

But did she like it? It’s hard to tell.

“The light bulbs were by far my favorite part.”

“My mouth was open the entire two hours and 20 minutes show—my jaw was on the floor. I loved the 80s hair band style. I want to live in the set of Cats—the light bulbs were by far my favorite part. The music is like the soundtrack to The Lost Boys, but with a lot more insane breathing and Broadway singing. It could have used more hissing.”

How does Cats the movie compare to the Broadway show? Send me your reviews at [email protected]

Author’s note: After writing this, I finally looked up the plot of Cats. I still don’t get it.