Drag stars Bob the Drag Queen and Shangela talk drag in the digital space, how to support queer communities, and finding light (or at least some glitter) in dark times.

In the finale of HBO’s Emmy-nominated series, We’re Here, drag superstars Shangela, Bob the Drag Queen, and Eureka O’Hara excitedly head to South Carolina to meet the “drag daughters” they’d soon mentor. Then the screen abruptly goes dark. The tone ominously shifts to a world overrun by the coronavirus. The episode then moves to the performers’ homes for a heartfelt Zoom finale in quarantine that chronicles the odd, unpredictable moment we’re all living through.

It’s a new world out there, one without stages, but drag queens keep working. Apartments have become theaters. Bathrooms are dressing rooms. And performers keep finding find new ways to put on new shows. “Drag queens are some of the most resourceful and creative people in the business,” says Shangela, a drag star and former contestant on RuPaul’s Drag Race. From Instagram Live shows to exclusive Patreon content, drag queens across the country are still looking sickening (aka fierce and flawless) in front of an online audience during COVID-19.

Watching drag queens sissy that walk on screen is no new phenomenon. RuPaul’s Drag Race has catapulted the careers of queens across the country, bringing drag into the mainstream. But we’d be remiss to exclude the 1990 documentary film Paris is Burning, which highlights the New York City ballroom scene and the Black and Latinx LGBTQ+ performers of the time. (Spoiler alert: if you thought Madonna invented “voguing,” you are sorely mistaken.)

INSIDER TIPYaaas. Werk. Shade. You know all those terms we love to say? These phrases originated from the drag community—particularly the Black drag community. In fact, much of the popular vernacular we use today is rooted in Black and queer culture of the ’80s and ’90s. For a primer on queer history, we recommend watching “Paris is Burning.”

While reality TV has made many drag queens household names, many drag performers across the U.S. are still working toward fame. Queens big and small in cities around the world are without their typical venues–and they’ve all moved online. RuPaul’s season-seven-winner Violet Chachki launched her lavish “Digital Follies” burlesque show, but local queens in your own community are regularly performing for CashApp tips. Quarantine has shaken up the entire industry and forced everyone to adapt.

We had a chance to kiki (drag speak for chat, honey) with Shangela and Bob the Drag Queen on life in lockdown, using quarantine for good, and how to support the drag community.

GENDER IS A FLUID CONCEPTWe asked about pronouns: Bob the Drag Queen identifies as non-binary and goes by both he/him and she/her pronouns. Shangela goes by she/her pronouns in drag.

Queens in Lock Down

In the Big Apple, Bob the Drag Queen (Caldwell Tidicue) is focusing on creating YouTube content and leaning into her “Sibling Rivalry” podcast with fellow queen Monét X Change. And deep in the heart of Texas, Shangela (D.J. Pierce) is finding the space to create while spending quality time with family. Despite the near 1,500 mile expanse, the two co-stars are grappling with both career success and COVID-19 uncertainty.

“Having a show premiere, being a part of your own show, and hosting a show that’s nominated for an Emmy,” are just a few of Bob the Drag Queen’s big highlights of 2020.

Recently signed by ICM Partners, the RuPaul’s Drag Race season 8 winner and comedian has several big accolades under his belt but still misses performing in person. 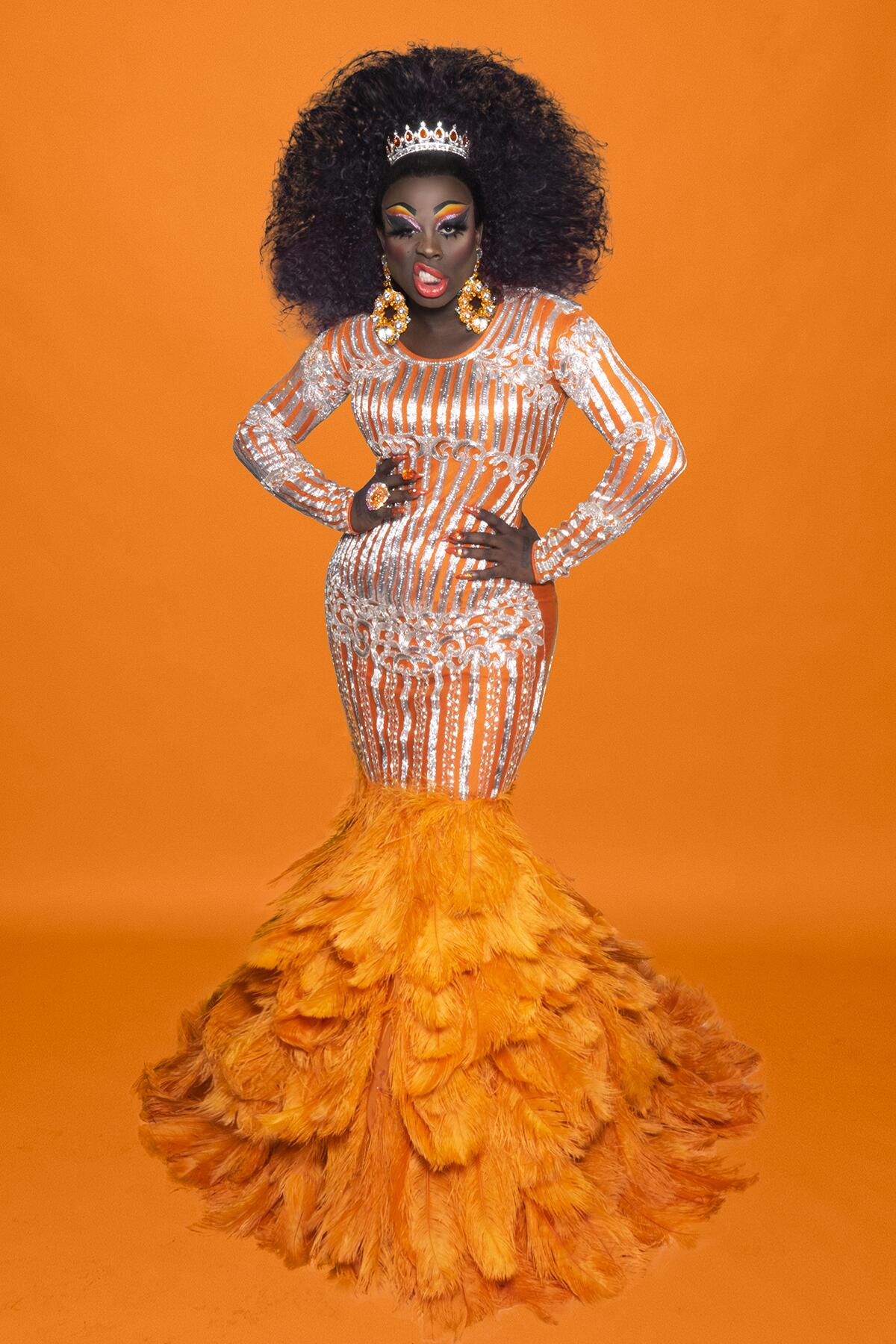 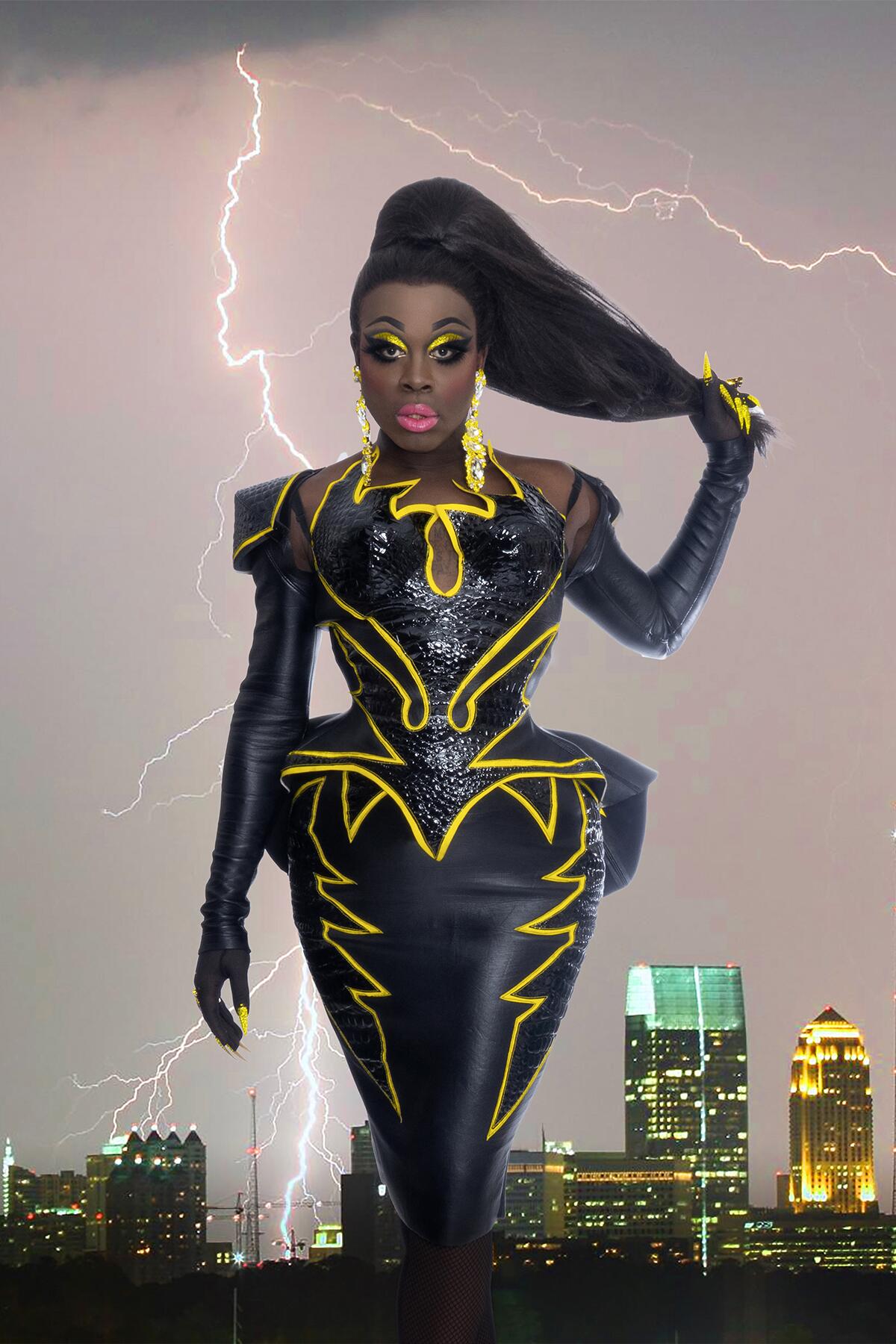 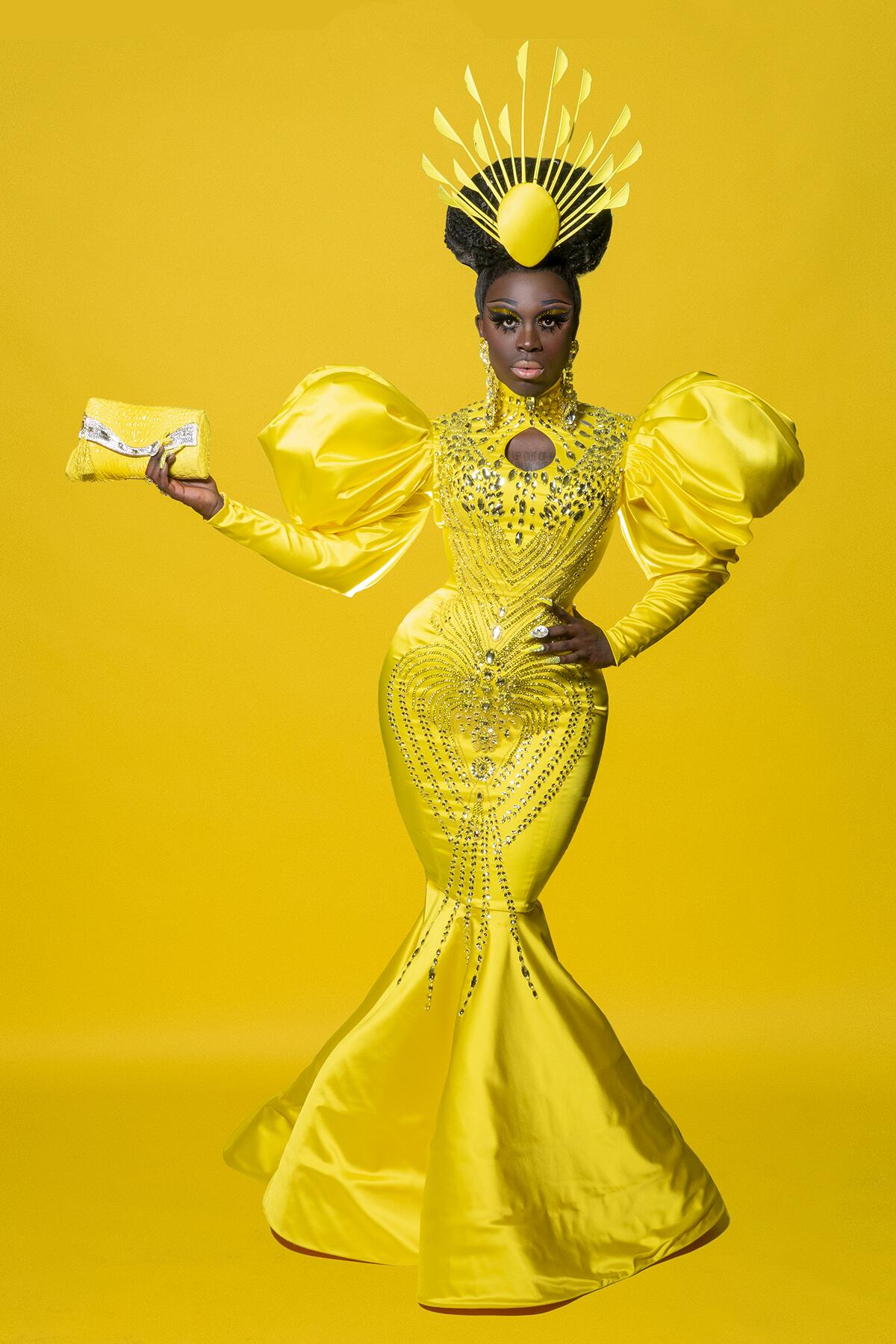 “I’ve been a professional performer full-time for about 10 years now and to not have that has really been a shock to my system,” says Bob the Drag Queen, who hasn’t been able to perform for an audience in more than 200 days.

Shangela, an actor and writer, has spent quarantine in her hometown of Paris, Texas. The A Star is Born actress has toured the globe and filmed projects such as HBO’s Lovecraft County, but COVID-19 has given her small respite from the jet-setting life. “Spending quality time [with friends and family] has been a real silver lining to an otherwise really rough period,” Shangela says.

She has even gotten to watch her show with her mother and grandmother as they safely shelter-in-place.

“No matter what walk of life you’re from, we can all identify with being on the outskirts,” says Shangela. “I think it’s a really brilliant thing to bring about this type of compassion and humanity in people in a time when we need it so much. When we’re having to be socially distant, this show reminds us of the importance of human connection together.”

Aside from their on-screen life, the two drag stars share a commitment to the queer community during the pandemic.

Making a Difference One Queen at a Time

Shangela recalls her own beginnings in drag and acting, auditioning for small roles in television. “I would have to walk across the entire studio lot in a little hooker skirt and my wig, and so many heads would turn,” she laughs. She soon learned, “if you really want to succeed and walk tall, you’ve got to love and accept all parts of who you are.” 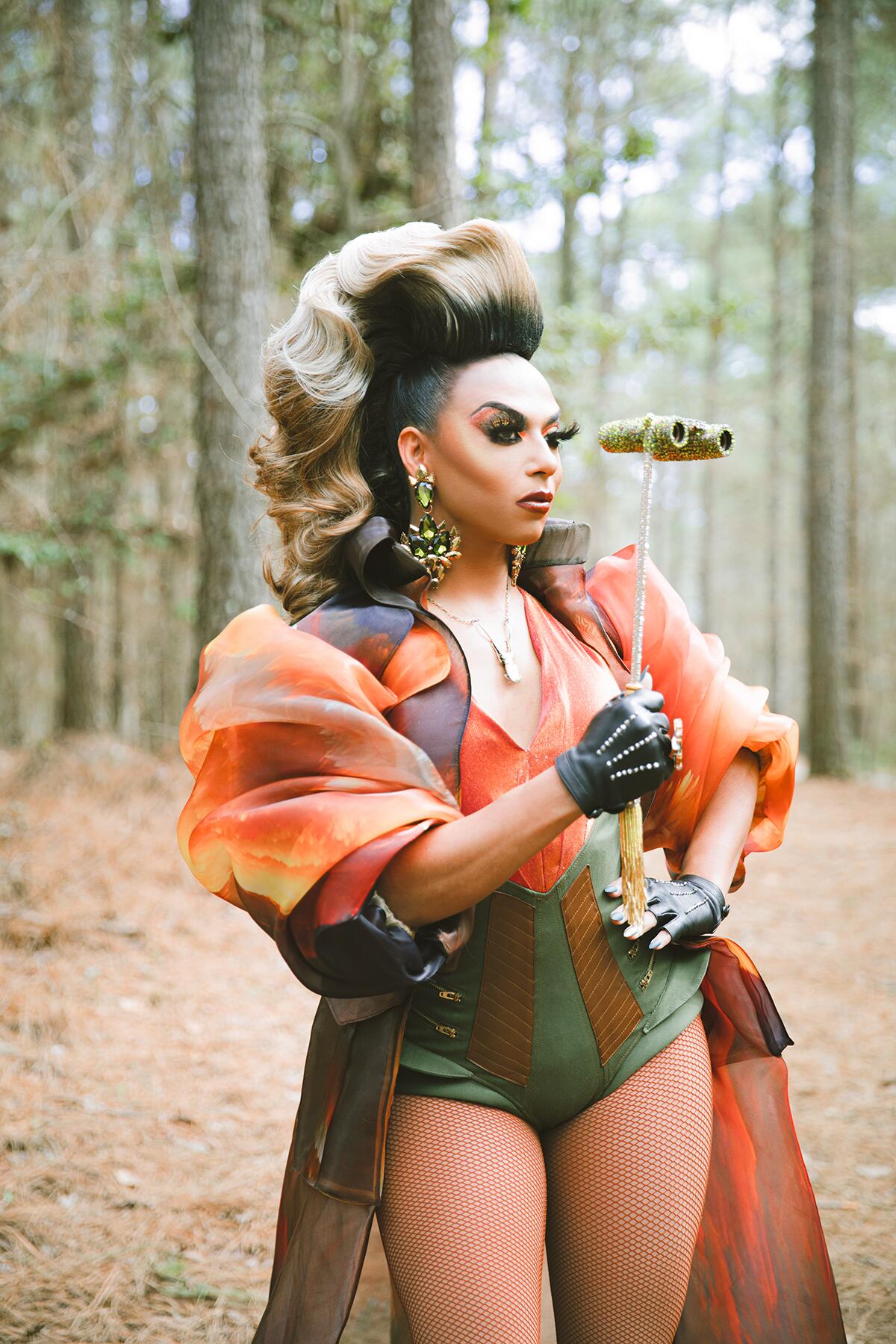 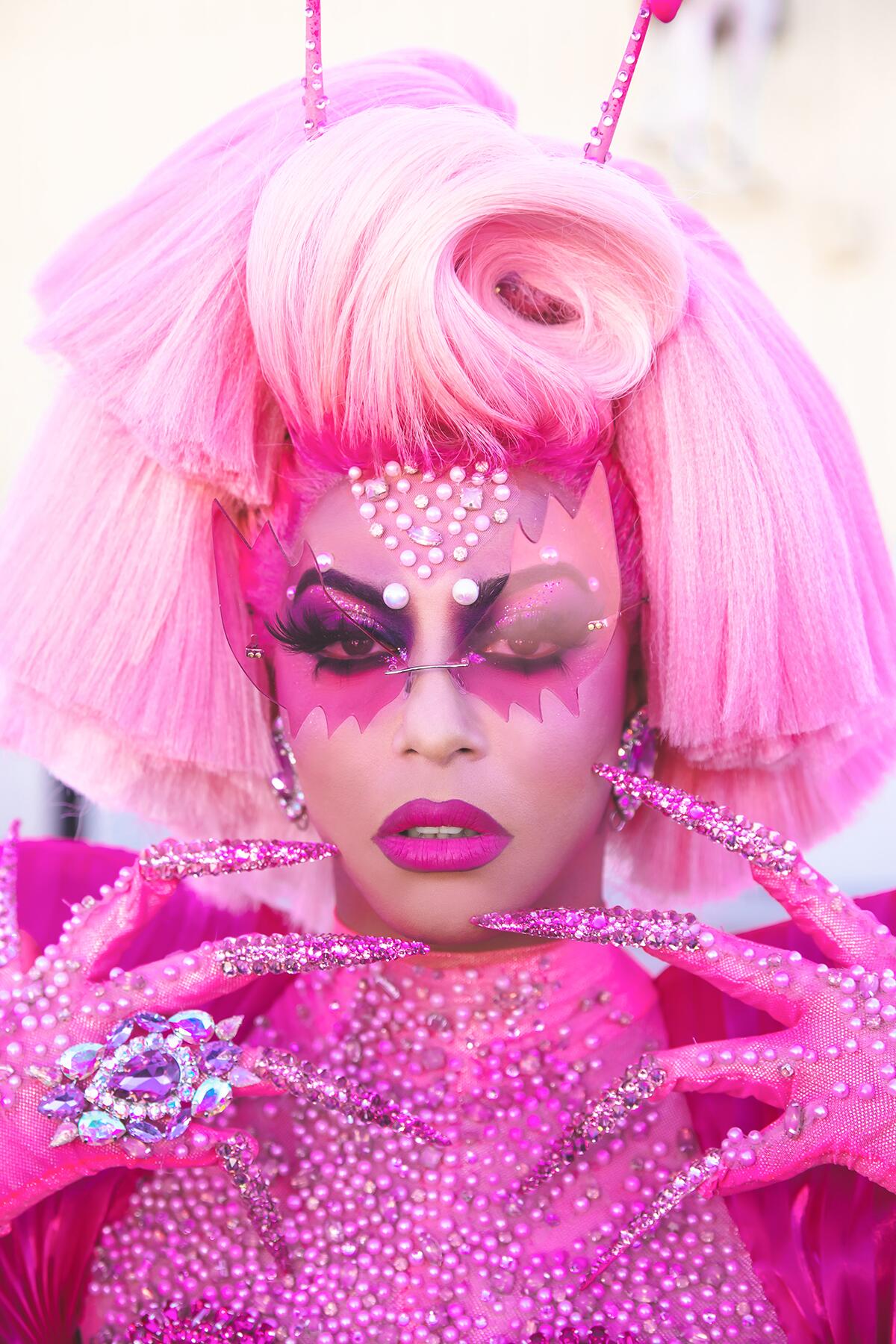 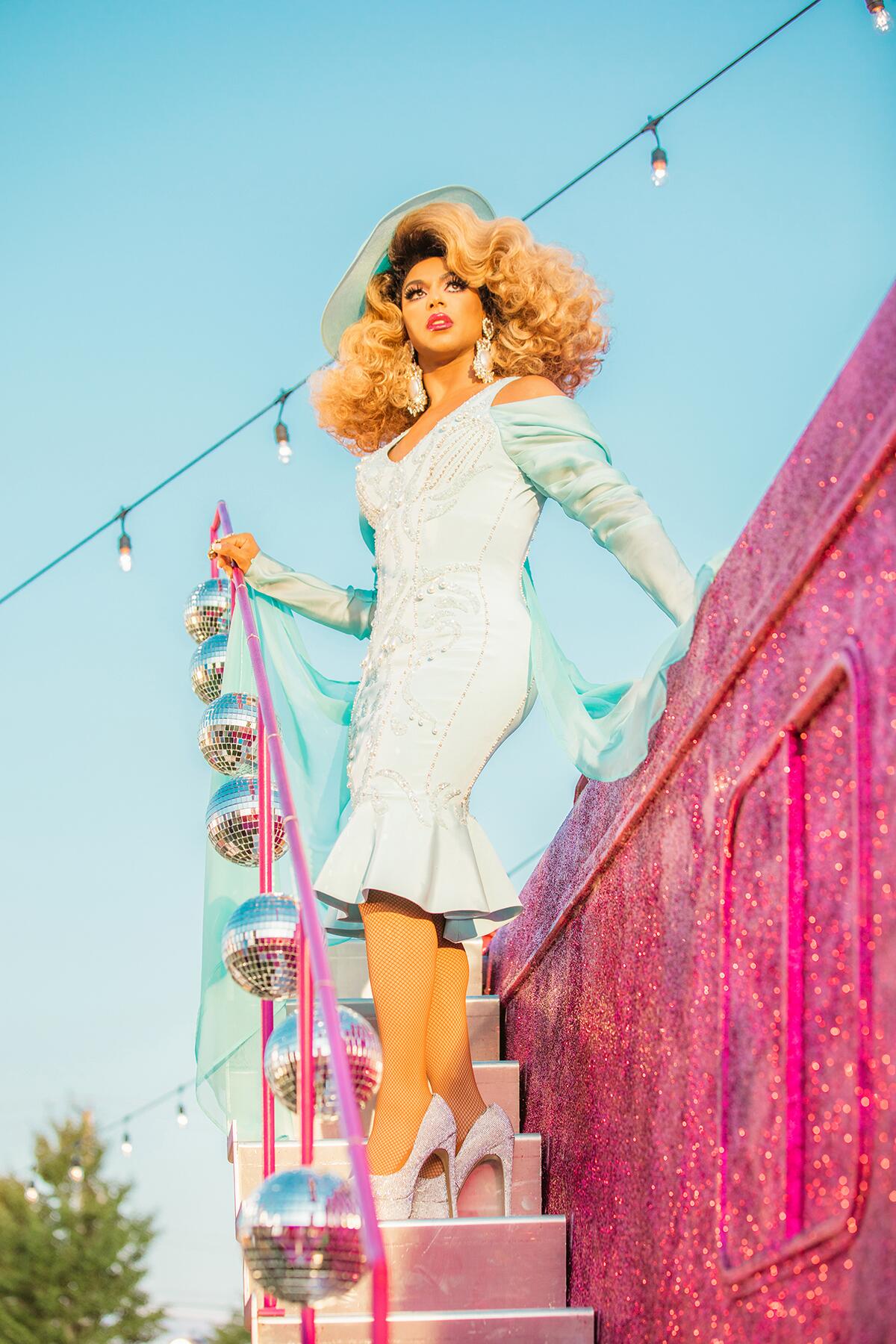 Memories of those early beginnings are not lost on Shangela. After seeing up-and-coming drag queens shift to a digital space during quarantine, Shangela began to wonder how she could help support the community in a substantial way. Enter: Feed the Queens, a charity formed to address the hunger of drag queens struggling to make ends meet during the COVID-19 pandemic.

With nightlife at a standstill, Shangela partnered with The Actor’s Fund to help fight hunger in the drag community. Drag queens in need can apply to receive a $100 gift card for groceries. The results have exceeded her wildest expectations.

“You think We’re Here made you cry?” she asks (it definitely did), “Try getting messages from people who’ve been helped by an organization idea that you had.”

The response has been “beautiful,” Shangela says, and has left her with a deep feeling of gratitude.

COVID-19 is not the only pandemic plaguing society. The Department of Homeland Security named white supremacy the “most lethal threat to the U.S.” Ahmaud Arbery, Breonna Taylor, and George Floyd joined a long list of Black Americans whose lives were lost to racism and police brutality. Black trans women have an average life expectancy of just 35 years old in the U.S. At the discriminatory intersection of sexism, racism, and homophobia, Black trans women are more vulnerable to violence and poor health due to systemic problems like homelessness, unemployment, and lack of access to healthcare.

Bob the Drag Queen teamed up with Peppermint, a trans performer and former RuPaul’s Drag Race contestant, to organize the Black Queer Town Hall. The pair partnered with political activist and New York City drag performer Marti Gould Cummings and The Only Productions to create a three-day event focused on the Black queer community. The town hall featured performances, roundtable discussions, and fundraising opportunities for Black Lives Matter in an effort to discuss ways to dismantle racism and white supremacy.

“It really moved me in so many ways to see the community come together to support Black queer artists,” says Bob the Drag Queen. “It felt super validating, and it was just one of the proudest things I’ve ever done…it was really an honor.”

How to Help Queens in the Pandemic

Outside of supporting movements like Black Queer Town Hall and Feed the Queens, being a patron of the drag community goes a long way.

Watching shows featuring the queer community allows “us to continue to be more visible and be part of conversations in circles we may not always be part of,” says Shangela. 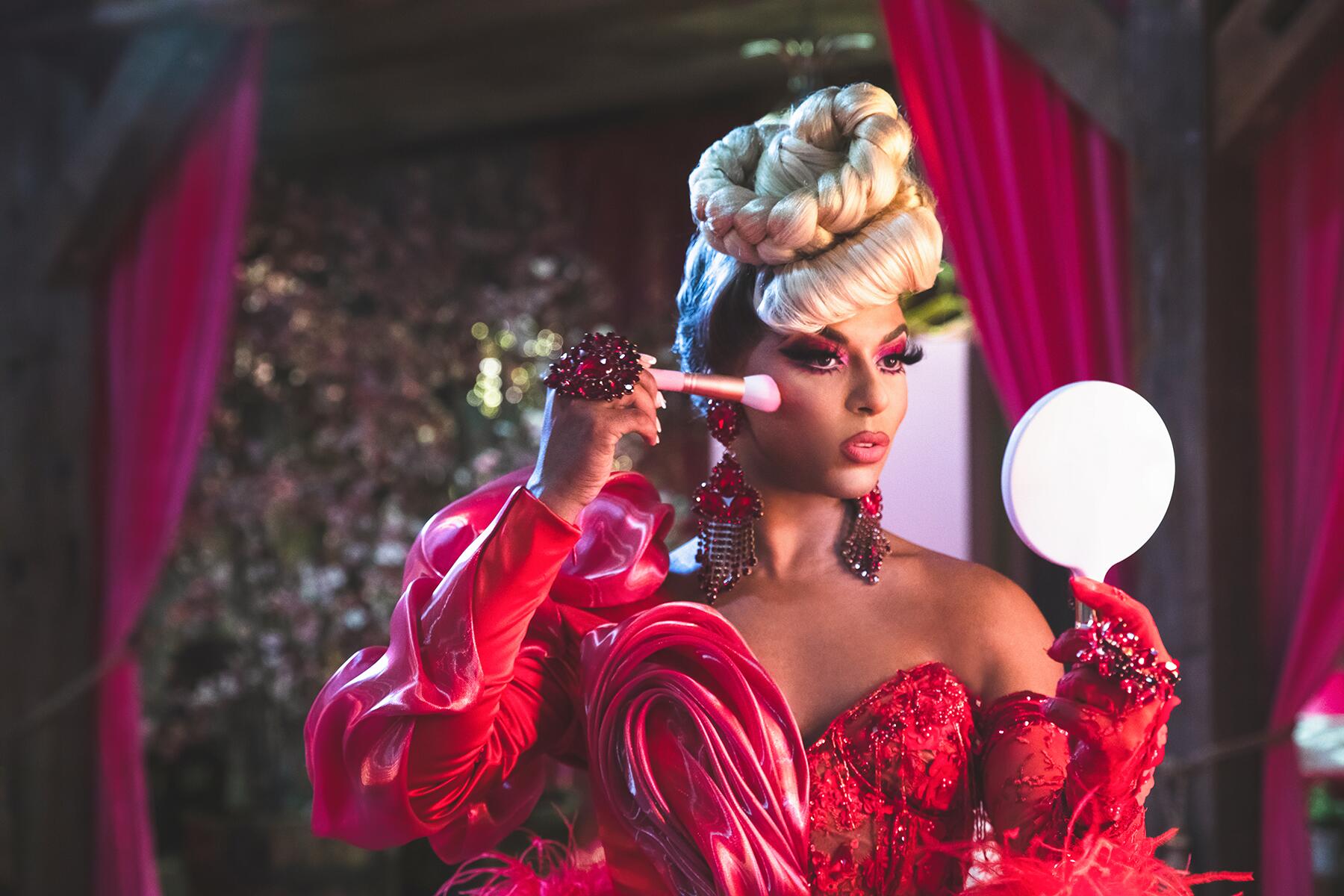 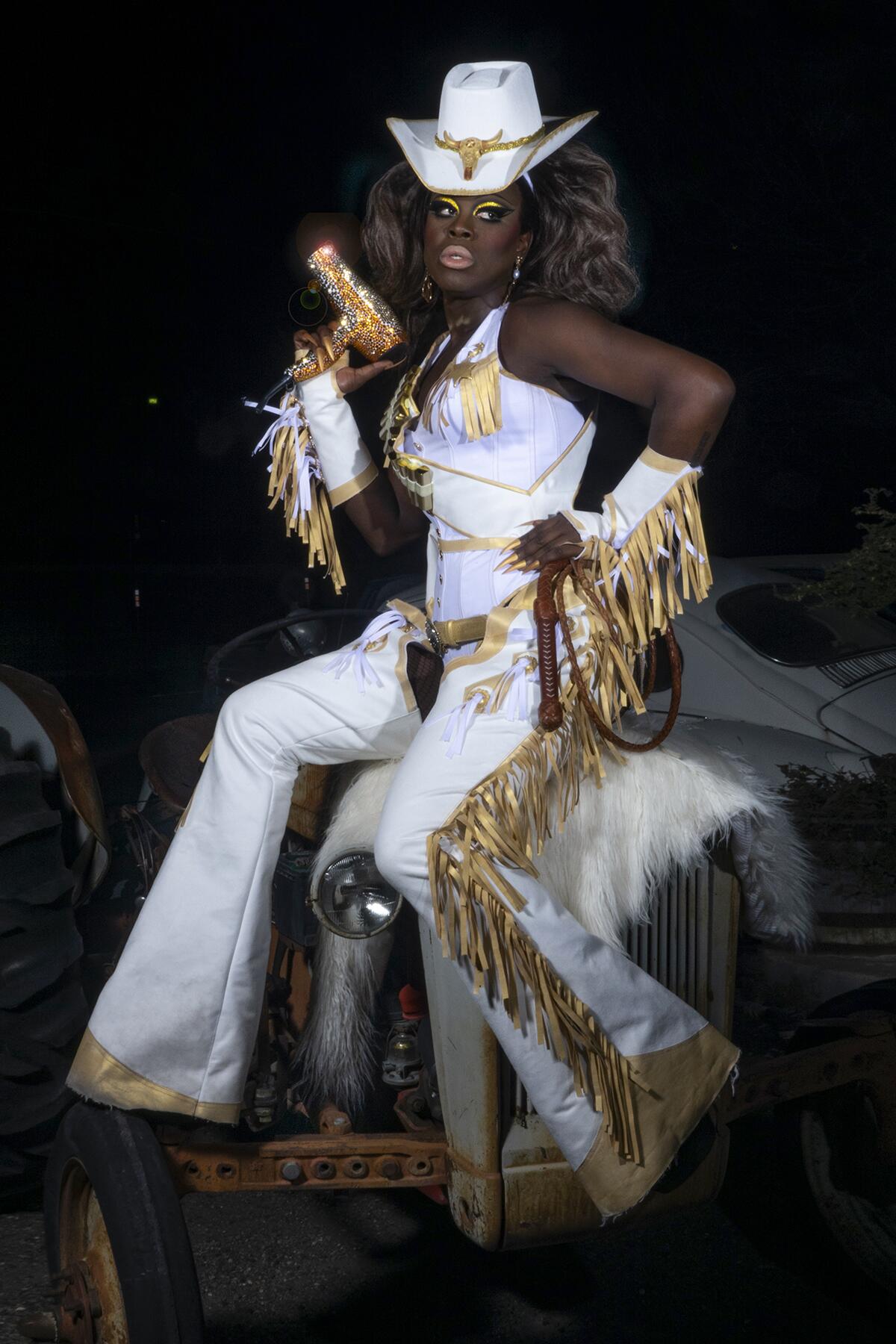 One of the most impactful moments of traveling to small Southern towns to film We’re Here, was seeing the “thriving queer scenes and, especially thriving drag scenes,” says Bob the Drag Queen. These same scenes are now in need of support.

The performers also recommend finding local queens to support within your community and online. Small actions, like following drag queen’s social media channels, subscribing to Patreon accounts, and tipping through Venmo or CashApp for online performances can make a big difference.

Can supporting the drag community add light back into the dark times we’re feeling during COVID-19? Shangela’s answer is simple: “I don’t know about light, but it surely can add glitter.”