Being a sapeur means more than just dressing well—it’s an identity.

Dancing outside the sidewalk bar, swigging from beer bottles slick with condensation, every one of us is drenched in sweat. The close humidity of the Brazzaville night has our hair stuck to our faces, our skin gleaming. But that doesn’t stop the sapeurs from looking seriously dapper in their sharp, canary yellow or scarlet suits, fedora hats, ties, and smart, polished shoes. (I just look like a plainly attired, frizz-haired mess, but frankly, I’m having too much fun to care.)

You might recognize the sapeurs, sometimes called the Congo dandies, from the 2014 Guinness advert that launched them into an international orbit—but the subculture has existed for over 100 years.

By the 1920s, many in Brazzaville—the capital of what is now the Republic of the Congo, then a French colony—had acquired an appreciation for Parisian fashion, perhaps made more widespread by soldiers returning from Europe after World War I. Most historians agree that these were the origins of La Société des Ambianceurs et des Personnes Élégantes (Society of Tastemakers and Elegant People)—la sape for short.

On the other side of the chocolate-brown River Congo, Kinshasa, the capital of the Democratic Republic of the Congo (DRC), also saw an emergence of la sape over the 20th century. In the 1970s, the sub-culture took on an edge of resistance when the DRC’s president, Mobutu Sese Seko, banned the wearing of Western clothes in an effort to mark a distance from Belgian colonialism.

“It’s an identity, a culture. There are different ways of expressing identity—as an artist, a painter. We are into dressing; this is how we express our identity.”

“Of course we are the originals. If not us, then who else?” says Bertrand Zonlelet, the president of L’Association la Dynamique des Sapeurs Cour des Grands, a sapeur group from northern Brazzaville. (Our conversation is translated by my Brazza guide, Destin Net-Simbou (Net), who works for Congo Conservation Company.)

“It’s an identity, a culture,” Bertrand explains. “There are different ways of expressing identity—as an artist, a painter. We are into dressing; this is how we express our identity.”

His group meets twice a month, with festivals bringing all the sapeurs together; they’re now working with the Congo government to establish an official day to celebrate la sape.

Anyone can become a sapeur, says Bertrand, who is an electrician by day. You join a group and then you learn how to dress (textures are important), how to mix colors (no more than three in an outfit), and how to walk—because being a sapeur is not only about putting together an outfit, but modeling it, too. 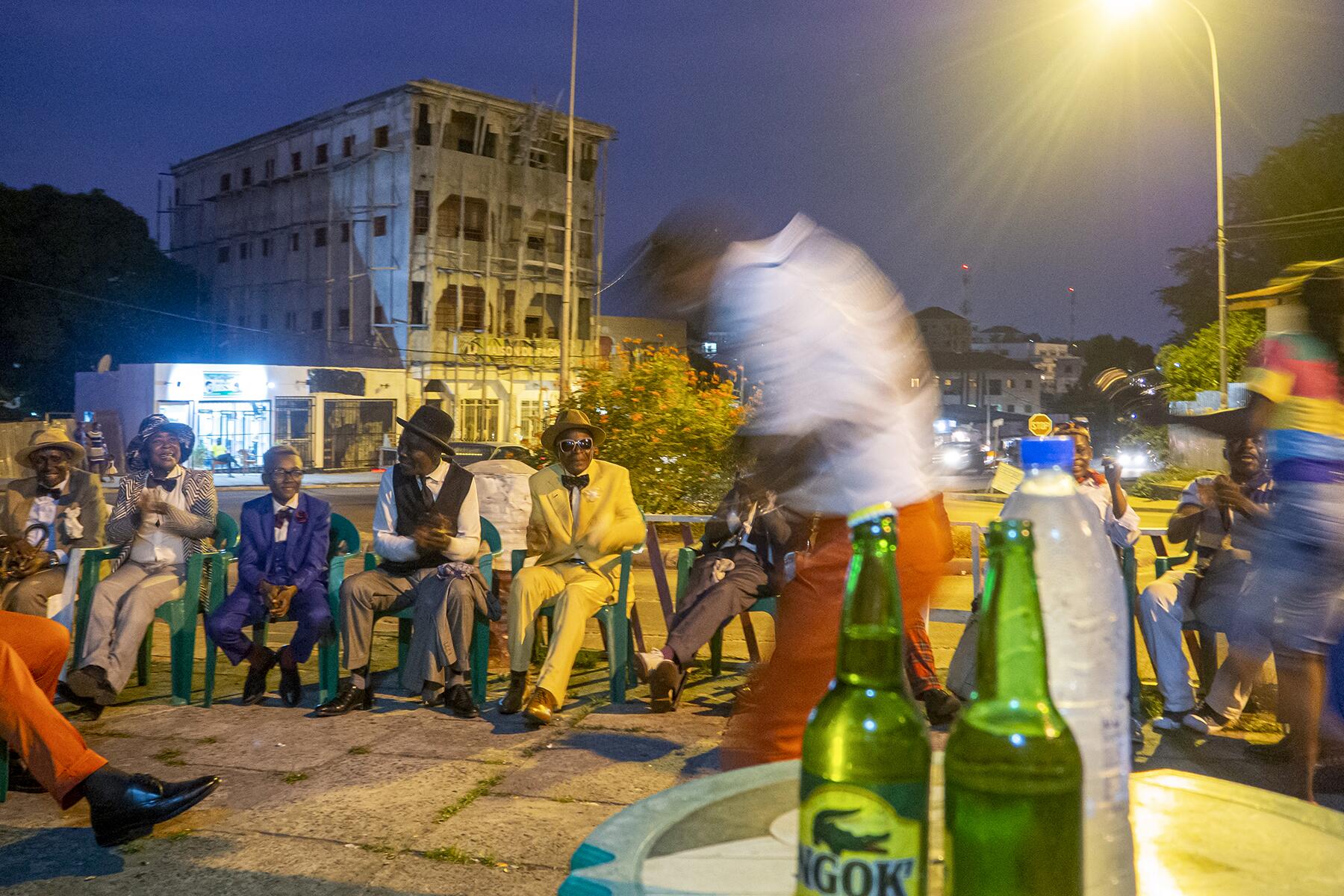 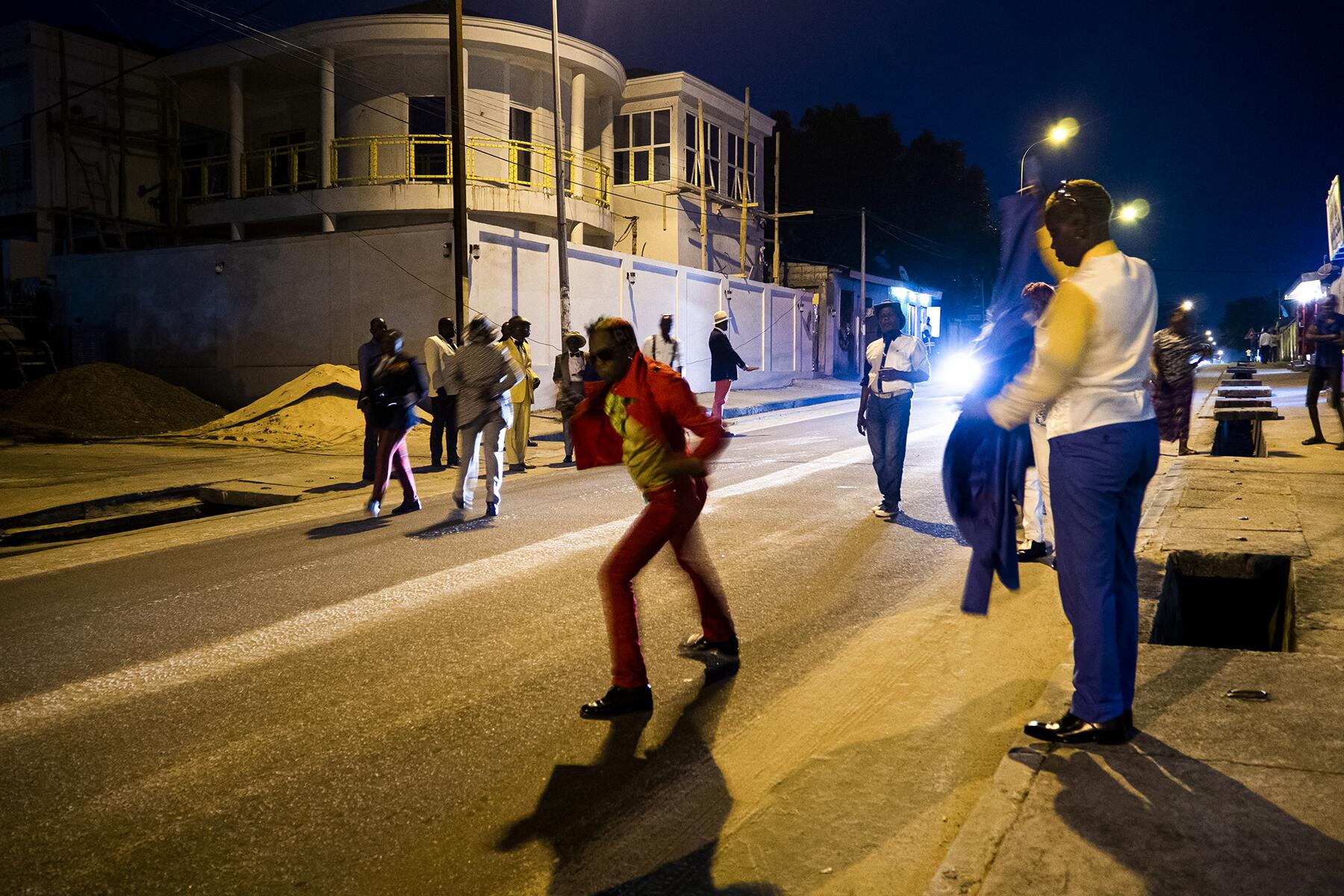 At the start of the evening, four travel companions and I join Bertrand’s group and sit in a large circle on plastic chairs outside the bar, the music already pumping. Each sapeur takes to the center to show off their finery, often with the sapeurs’ distinctive shuffling, stamping dance. A woman in a red suit flicks her jacket out to reveal her lime-green shirt and belt, tugging the end of her matching neck scarf. The sapeurs clap and cheer each other on. Ten-year-old Rodivin struts down the street in his navy-blue suit, posing like a model at the end of a catwalk for the camera. His mother and father are both sapeurs—he says he wants to travel the world to share their culture.

Passersby gather on the sidewalk to watch. Sapeurs are known to frequent certain bars in Brazzaville and, says Net, they always bring the party.

One gentleman removes his jacket and unbuttons his waistcoat, before taking the end of his tie in his teeth and striking a pose. Some sapeurs swing engraved wooden canes, others hold ornate pipes in the corner of their mouths. A sapeuse starts with her arms aloft and one leg held up at a right angle, in something like a tai chi pose, before whipping off her hat and placing one foot before the other, showing off her tartan pants.

A sapeur might own up to 100 designer suits, some from France or Italy, with shoes from England, maybe even a kilt from Scotland.

“If a man is able to tie a tie and women can do the same, we should be equal,” sapeuse Grâce Messani says.

Grâce—who’s wearing a pale blue suit with a white handkerchief in the pocket—is an award-winning sapeuse. What does it take to become a champion?

Of course, being a sapeur can also cost a lot of money. A sapeur might own up to 100 designer suits, some from France or Italy, with shoes from England, maybe even a kilt from Scotland. Sometimes they receive gifts, but mostly they fund their own wardrobes.

But, says Bertrand, for him and others like him, the expense is worth it: “It is an honor to continue this culture.” It’s clear that it’s not just about clothes, but about making a statement—about economics, gender equality, politics, and community. They have a powerful presence that can light up a street.

We exchange hugs, kisses, and handshakes, then pile into a taxi and the sapeurs wave us off into a night that already seems somewhat drabber without them.