Watch a machine process food and poop, experience being “euthanized,” witness a living, breathing man-as-art display, all brought to you by the mad genius who parks in a space reserved for “God.”

I’m standing next to a poop machine.

It’s a simulated digestive tract, to be exact. A row of tubes and bags are suspended from the ceiling, whirring and churning with inner gastric tract functions. It’s fed at 11:00 am, the machine poops around 2:00 pm, but the overpowering stench of excrement lasts all day. I gag and stumble from the room.

MONA is recognized as a world-class museum that’s considered one of the most eccentric galleries on earth, covering everything from bodily functions to sex to death.

Believe it or not, the Cloaca Professional (2010) – aka the “Poop Machine” – is just one of the many weird and wonderful works of art at the Museum of Old and New Art (MONA), an art museum in Tasmania that’s been dubbed “a subversive adult Disneyland.” It’s recognized as a world-class museum that’s considered one of the most eccentric galleries on earth, covering everything from bodily functions to sex to death.

“MONA isn’t just a collection of art and objects from ancient to contemporary – it’s also about important ideas,” says Jane Clark, Senior Research Curator at the MONA. “The exhibits at MONA are likely to make you wonder ‘What is art anyway?’ And why has art-making been part of every human culture on earth?”

The fantastical museum is located on a picturesque peninsula outside Hobart and features three subterranean floors of provocative and sometimes disturbing art. There are no placards or sequenced order of the exhibits, unlike “regular” galleries. But being the oddball seems to work in MONA’s favor: since opening in 2011, the museum has drawn more than a million visitors eager to see ancient antiquities to contemporary works from international artists, including Brett Whiteley, Pablo Picasso, and Damien Hirst.

Love it or hate it, the poo machine is a starring attraction. The piece was commissioned by Belgian artist, Wim Delvoye, and it’s met with revulsion and intrigue alike.

“Some visitors hate the idea of an artwork that mimics the human digestive system,” says Clark. “Others find it less provocative than either fascinating or funny.”

There are several versions of the contraption, but all operate under the same concept: the machine is fed daily; and then, enzymes break down the meal over the course of the day, passing it through various tubes and flasks. Eventually, a chunky turd plops onto a tray, spewing a noxious odor into the air.

Love it or hate it, the poo machine is a starring attraction.

There are other whimsical works to see, and I spend an afternoon roaming the cavernous floors to view as much as I can. There are bizarre and disturbing films – one of a sobbing man hacking off his own hands – and a wall of 151 porcelain vulvas, sculpted from real women (and reportedly available in the gift shop in the form of soap replicas). Visitors can sing along with thirty Madonna fans in Candice Breitz’s video installation Queen, or get a simulated experience of being euthanized with My Beautiful Chair. There’s also Austrian sculptor Erwin Wurm’s “Fat Car” – a sleek, fire-engine red Porsche bulging with fiberglass and polystyrene.

“This artwork is a real Porsche Carrera convertible, but it’s also a witty visual commentary about having too much stuff,” says Clark. 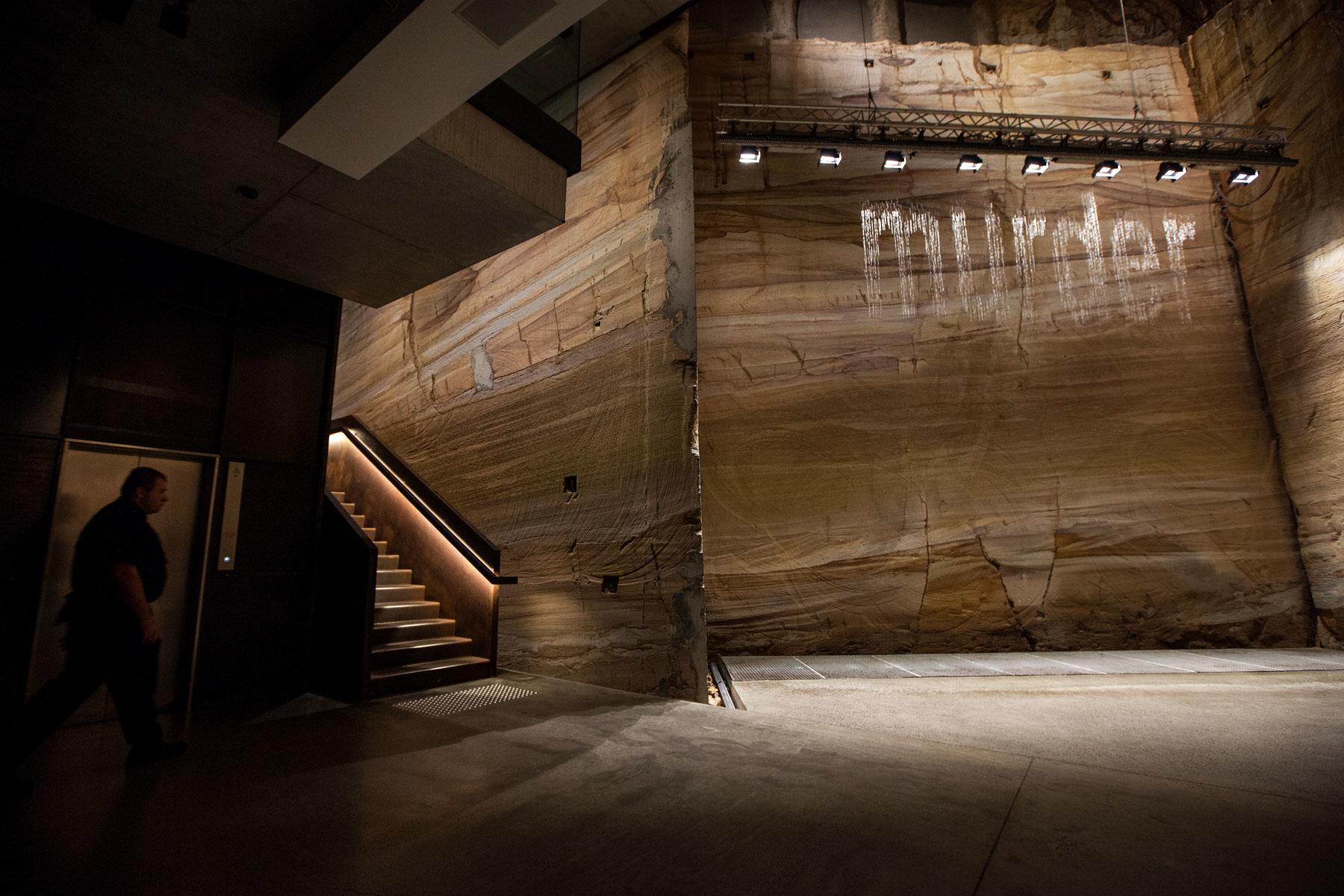 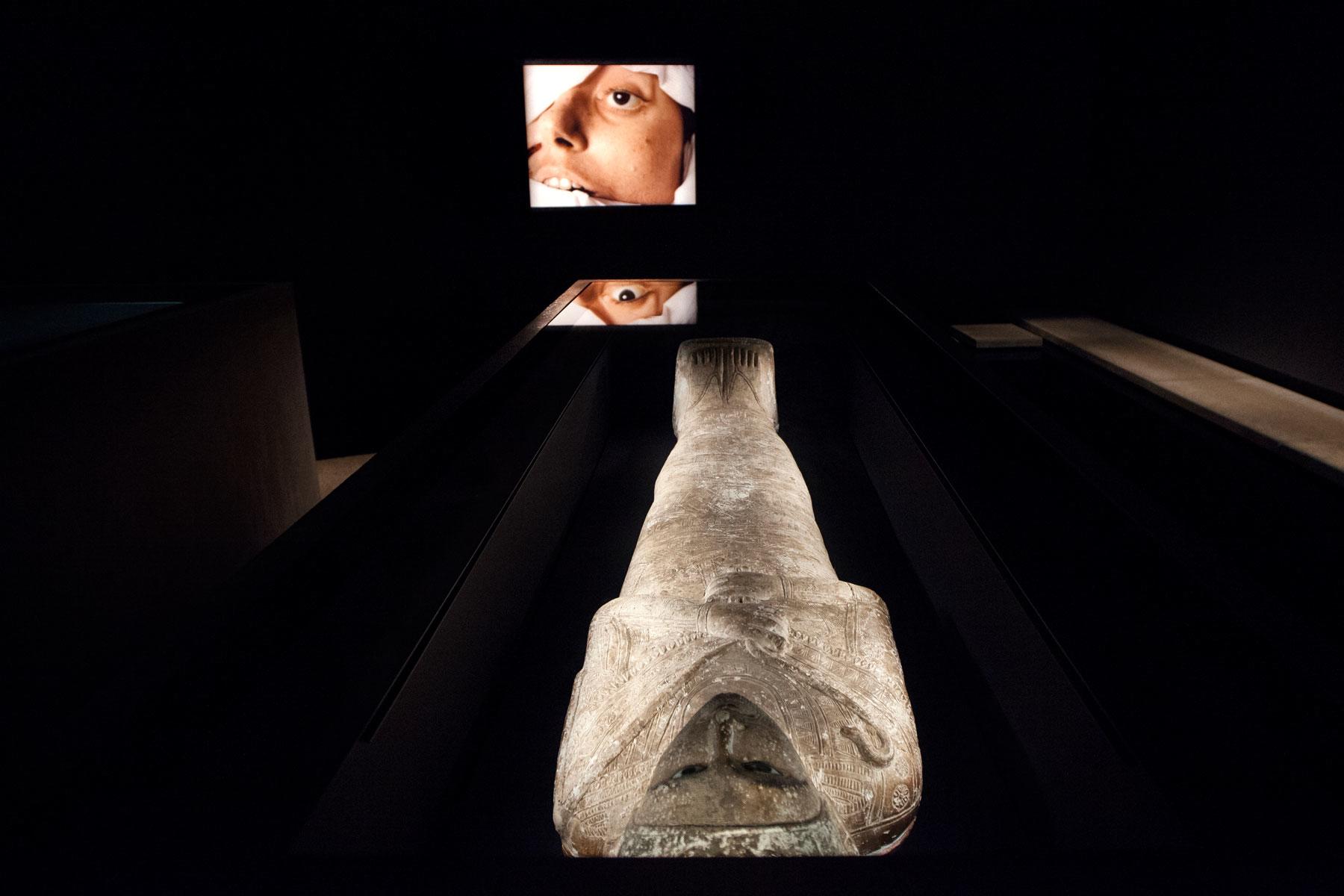 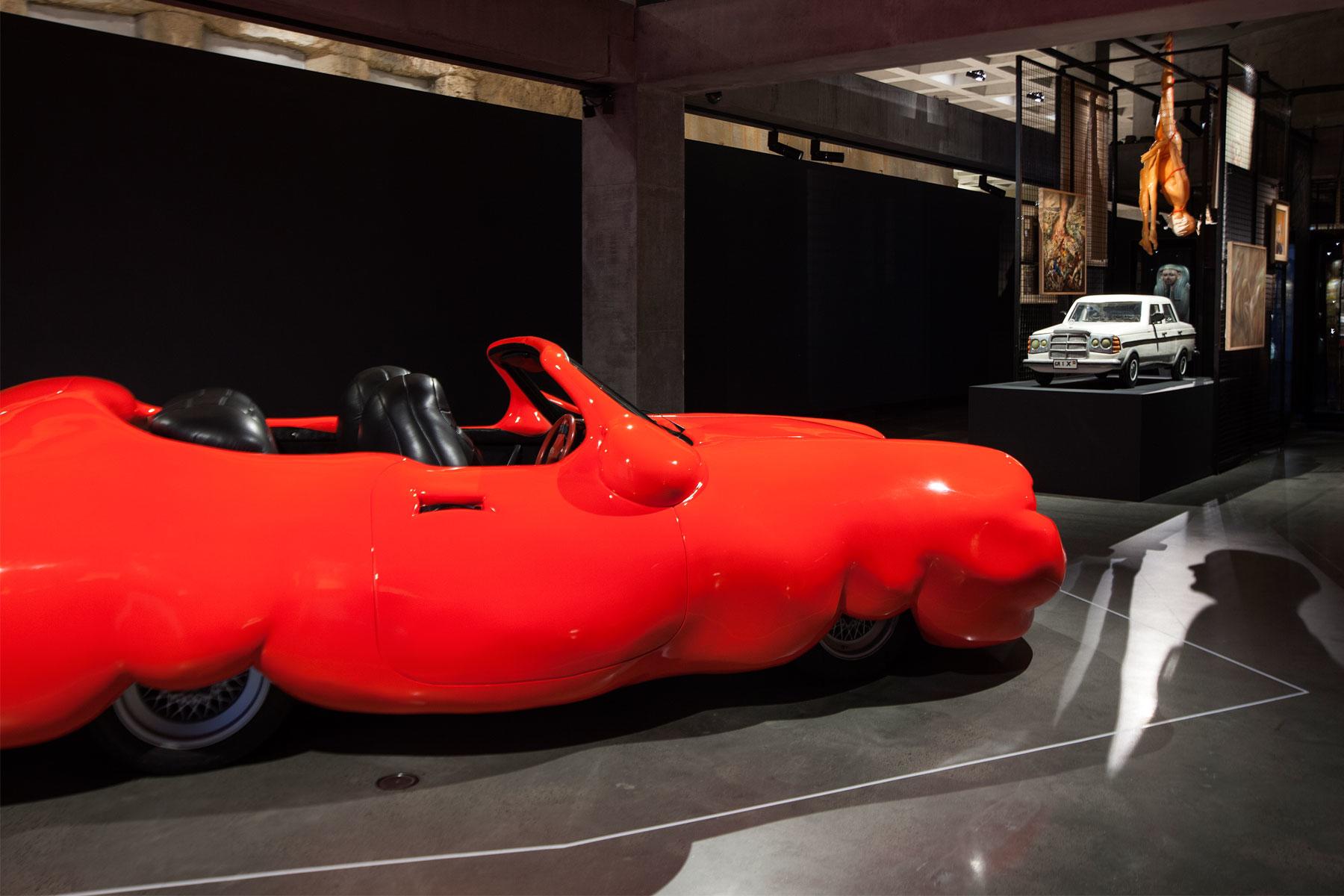 There’s also “Tattoo Tim” – a live man covered in a colorful tattoo who sits on public display. The artwork, Tim Steiner, allowed artist Wim Delvoye to tattoo the Virgin Mary crowned by a Mexican-style skull onto his back. It took over 40 hours to complete, and when Steiner dies, his skin will be framed and displayed. In the meantime, Tattoo Tim is a living, breathing exhibit.

“Tim became art when a contract was signed in 2008 and a German collector agreed to pay €150,000 with the proceeds shared by Wim (artist), Tim (artwork custodian), and a gallery in Zurich (agent),” says Clark.

Who in the world would create such a gallery of curiosities? It’s the brainchild of David Walsh, a mathematician from Hobart who made his fortune as a professional gambler and allegedly invested more than $200 million to open MONA. It’s no wonder his reserved parking space at MONA is marked “God.”

“David Walsh really built MONA to try to understand himself better, to understand our humanness and, importantly, our failings and limitations,” says Clark. “It’s his own personal experiment – shared with all comers. He actually lives there. So he’s asking you into his home as well as his mind.”

“Visiting MONA may well change your life. You won’t be told what to think – but you’ll have a great time looking; thinking; just coming along for the ride.”

It’s not all contemporary pieces inside his gargantuan gallery. A nod to the old, the dimly-lit halls also include ancient Egyptian pieces, such as mummies and sarcophagi, as well as other artifacts and antiquities. The MONA also hosts two festivals – a summer (January) festival, Mofo, unleashes a mix of music and art, followed by a “Dark Mofo” winter festival in June, that explores “centuries-old winter solstice rituals and celebrates the dark through art, music, food, film, light and noise.” 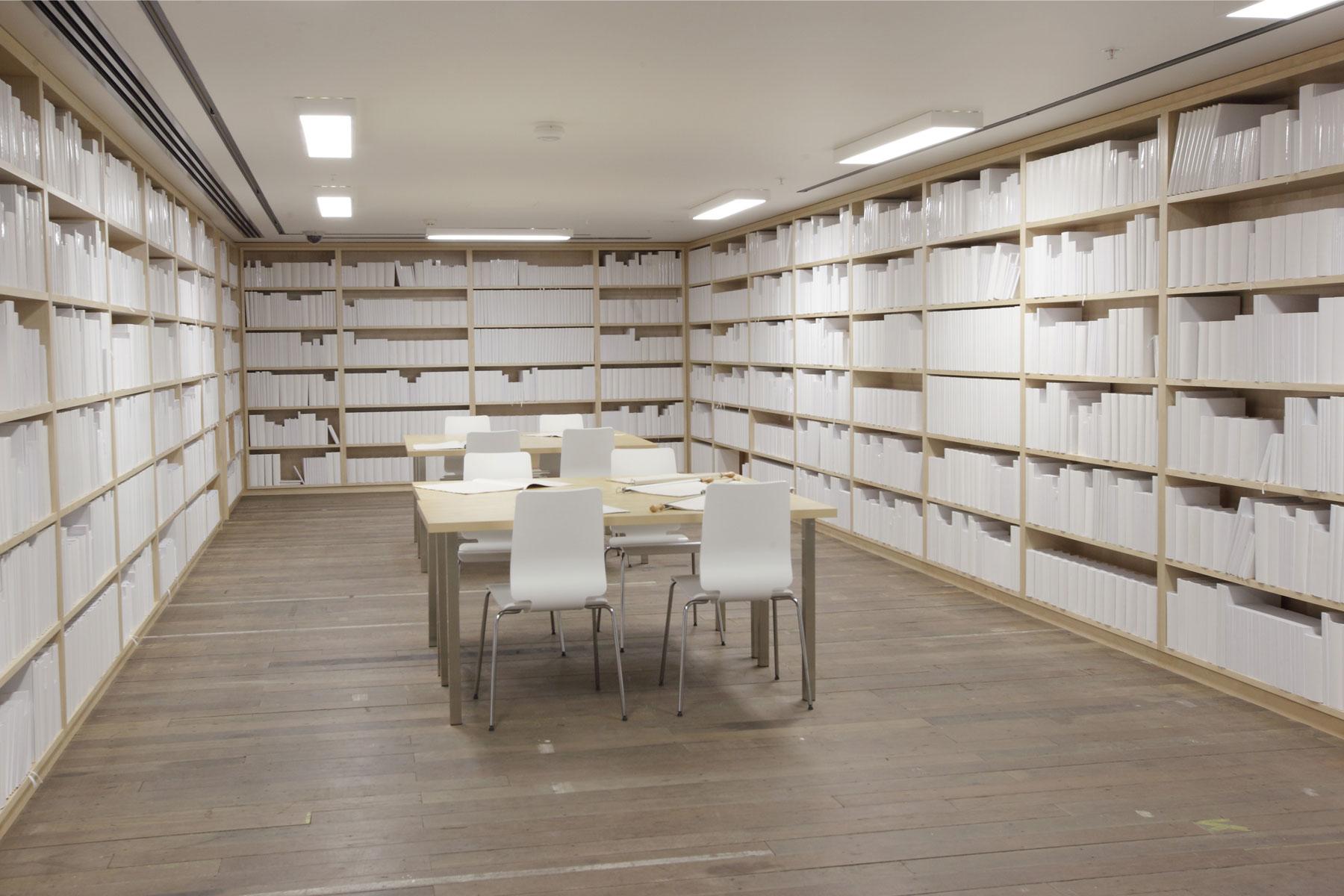 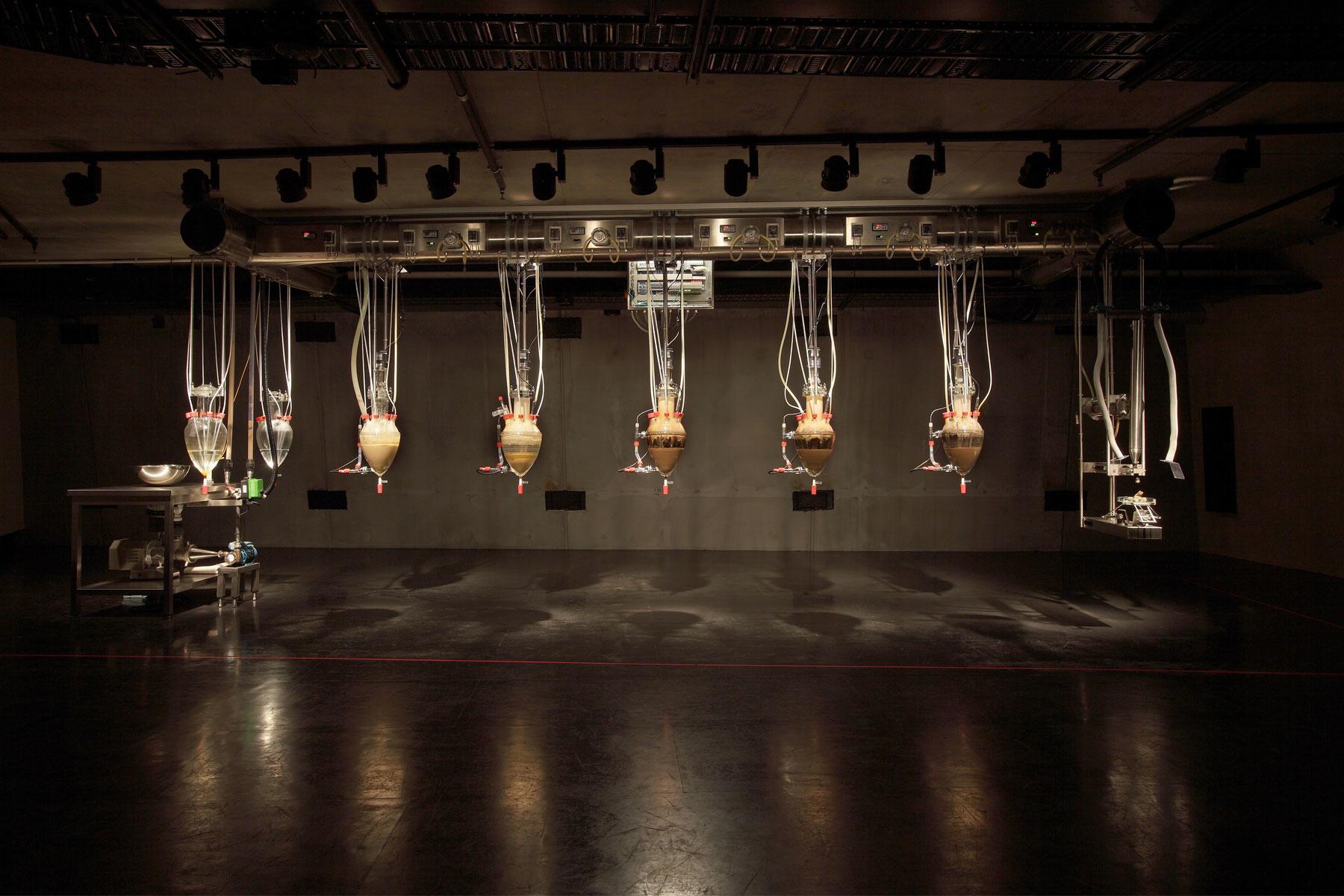 “There’s not only amazing art from around the world and millennia of history, but also special temporary exhibitions, fabulous food, great wine, music, regular festivals, a market in summer,” says Clark. “Visiting MONA may well change your life. You won’t be told what to think – but you’ll have a great time looking; thinking; just coming along for the ride.”