Join us for this four-part series exploring drag performance across the country, featuring artists & venues with unique regional identities.

Whether you’re a lifetime drag enthusiast or a RuPaul’s Drag Race newbie, there’s a lot to learn about the wide world of drag. Join us for this four-part series exploring drag performance across the country, featuring artists and venues with unique regional identities. 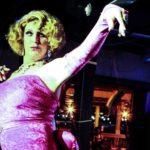 Our foray into the American southeast starts in Florida, a state that boasts as many types of drag as it does major cities. From Orlando to Sarasota and Miami to Tampa and Ybor City, drag connoisseurs can find blazing nightlife and pageant queens as well as campy cabarets. 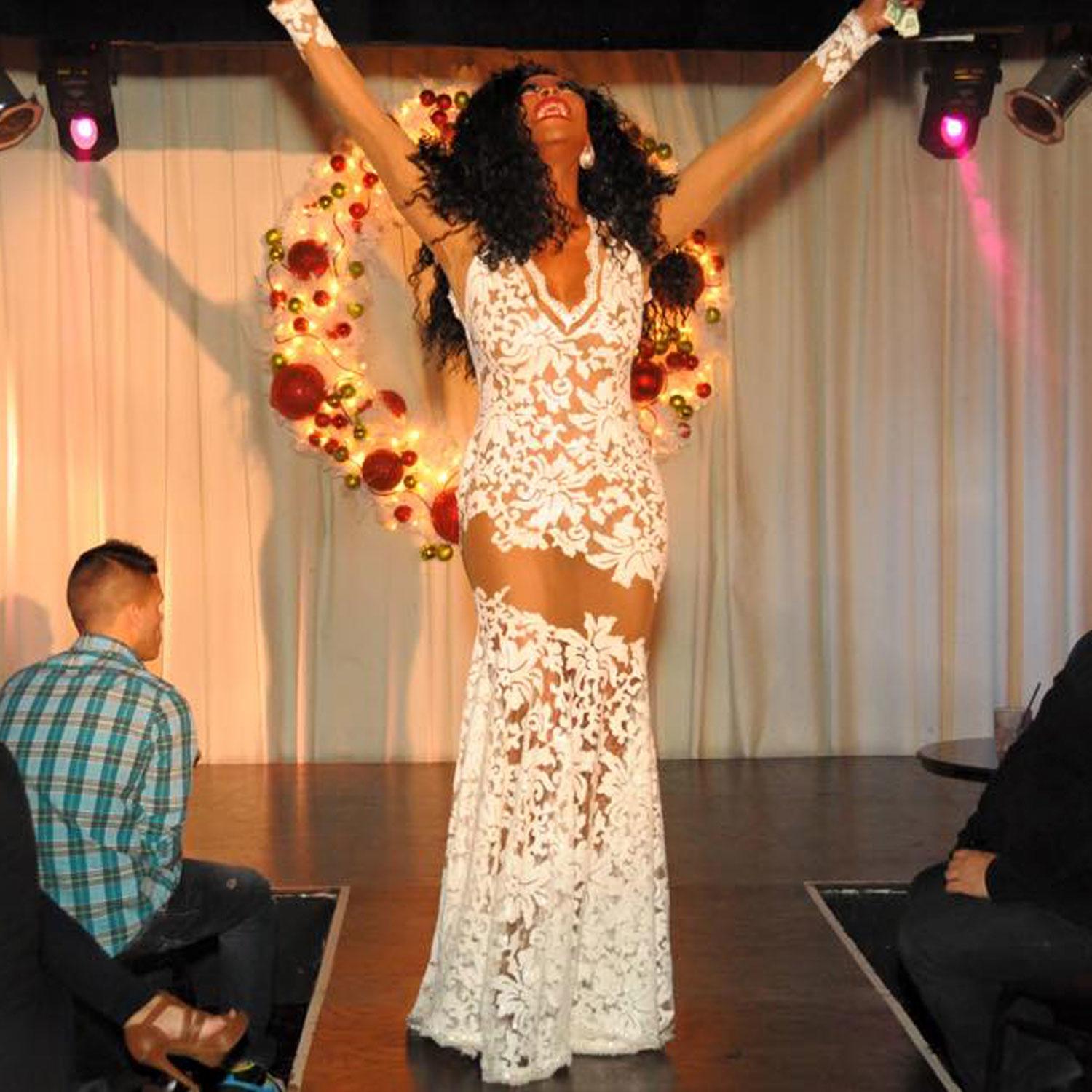 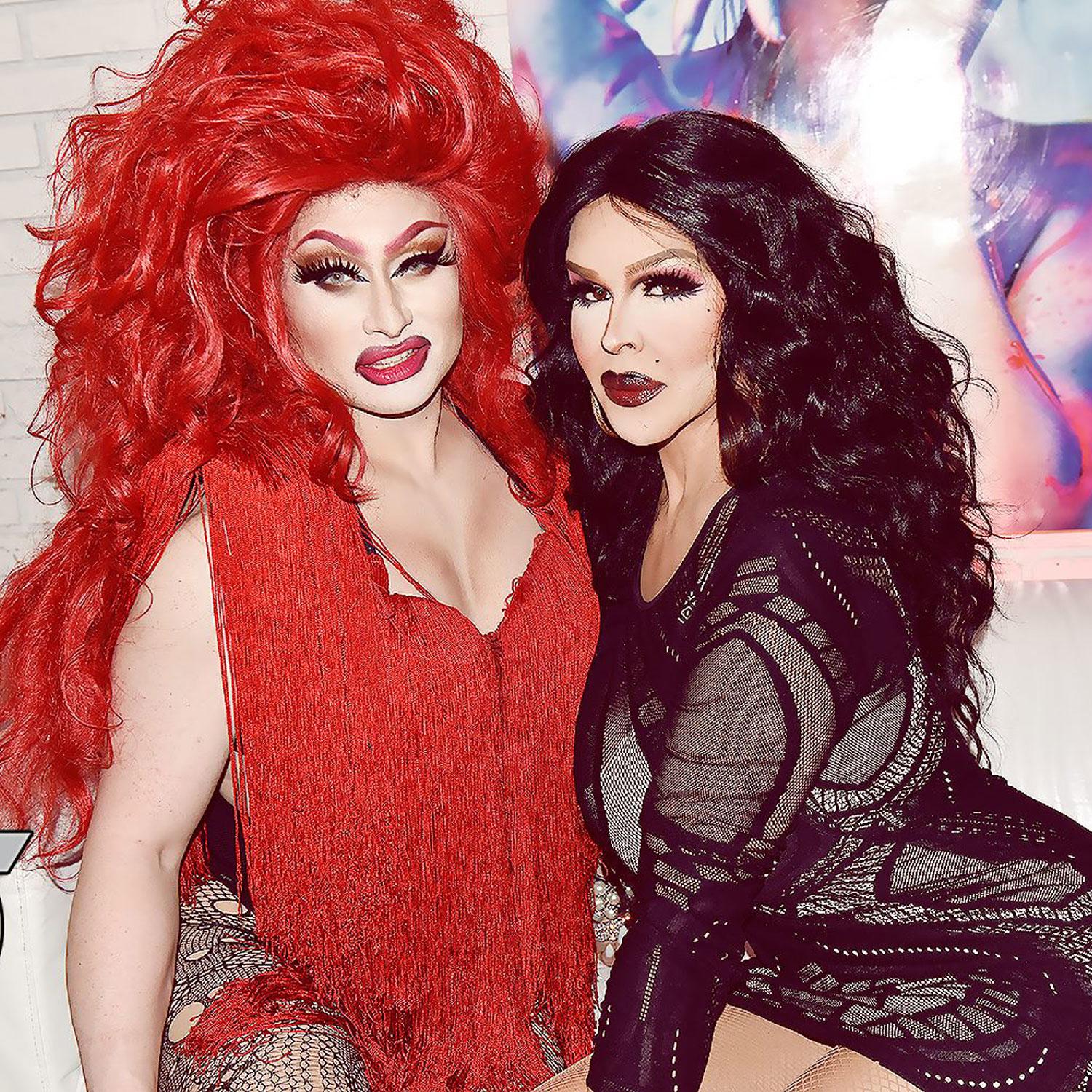 The ladies of Jacksonville and Gainesville are heavily-titled and as-seen-on-TV. While the northeast corner of Florida might not be the first place you think of vacationing, its nightclubs are home to some star-studded performances.

It’s not often that classic drag performers, fashionistas, and bearded beauties come together under one roof—Metro might be just the one-stop shop you need for a first taste of the variety drag can offer. There’s even a cast of male performers, including Blue, Rico, and Judas Elliott (a nationally- and regionally-titled Entertainer of the Year). Many of the men and women at Metro perform at the nearby nightclub In Cahoots along with a stunning cast of queens such as Dixie DeLa Cruize and Chavella Bellezza. And nearby Gainesville is the home of Jade Jolie (RuPaul’s Drag Race season 5), though these days you’ll catch her performing at Play Louisville in Kentucky.

Of course, northern Florida doesn’t have a monopoly on pageants. Fans of high kicks, grinding, and club beats can follow their favorite queens up and down the east coast of the state. Southern Nights Orlando is the home bar of Roxxxy Andrews (RuPaul’s Drag Race season 5 and RuPaul’s Drag Race All Stars season 2), while performers like Missy Meyakie LePaige and Calyspo Monroe Lords (known for her Rihanna impersonations) live it up in Miami’s South Beach and Fort Lauderdale, respectively.

Any real drag fan knows that beauty comes in all shades and sizes. For shows with a quirky theater twist, Sarasota and its surrounding cities are the way to go. Here you can find pin-up doll duo Selma Nilla and Melba Peach, the Plump Sisters; Trixe and GrandMa Pearl at The Purple Rhino, and drag comedienne Beneva Fruitville. For an idea of what’s on the menu, picture the Plump Sister’s sold-out dinner show Vaudeville’s Dead at The Starlite Room or a recent Golden Girls-inspired musical, Thank You for Being a Friend by Nick Brennan, that played this summer on Empire Stage in Fort Lauderdale. Stay watching these queens’ social media, because there’s sure to be more madness to come.

Just over the border from the Sunshine State, fans can find a region rich with drag history. RuPaul got her start here as a performer in Atlanta 40 years before hometown girl Violet Chachki took the crown in season seven of Drag Race. But other local legends are stacked throughout the cities of Georgia—if you know where to look.

And I Am Telling You, I’m Not Going

In search of real drag veterans? You’ll want to start at Lips Atlanta, where you’ll find performers who have lasted through the decades on the strength of their wit and lewd humor. Two not to miss: Bubba D. Licious, who’s been in drag since 1989, and Mr. Charlie Brown. But remember, drag is not for the faint of heart. Or, as Mr. Brown once said, “If you can’t laugh at a fat, 65-year-old bald-headed man in a dress, you don’t have no business on Buford Highway after dark to begin with.”

If you can’t laugh at a fat, 65-year-old bald-headed man in a dress, you don’t have no business on Buford Highway after dark to begin with.

Out east in Savannah, you can visit ClubOne. The venue is famous for having once been the home of The Lady Chablis, a drag powerhouse featured in John Berendt’s Midnight in the Garden of Good and Evil (and the ensuing Clint Eastwood adaptation). ClubOne still stands, featuring performers such as Blair Williams (a former Miss Gay Savannah and Miss Gay America), Chi Chi, Destiny Myklz, and others. 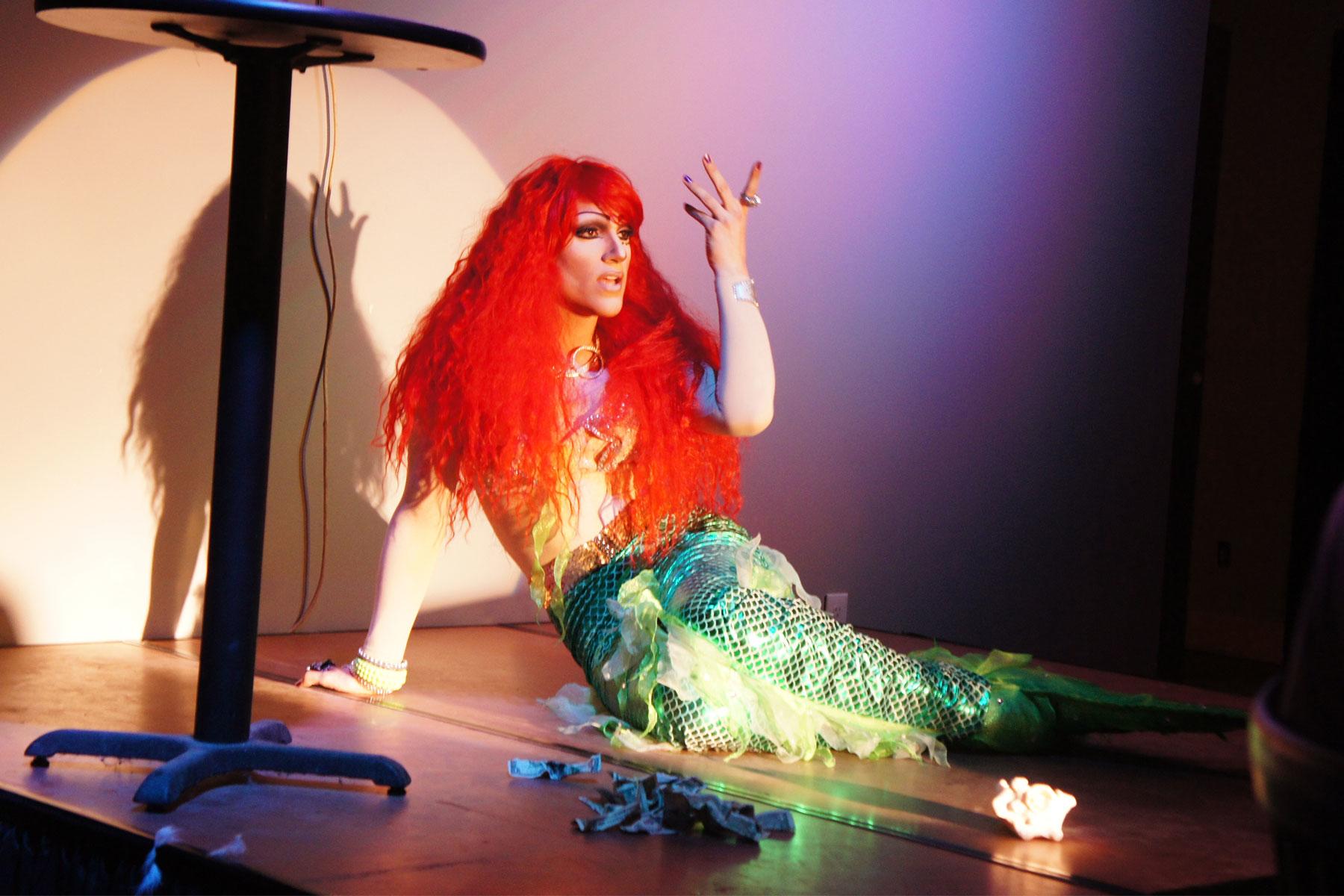 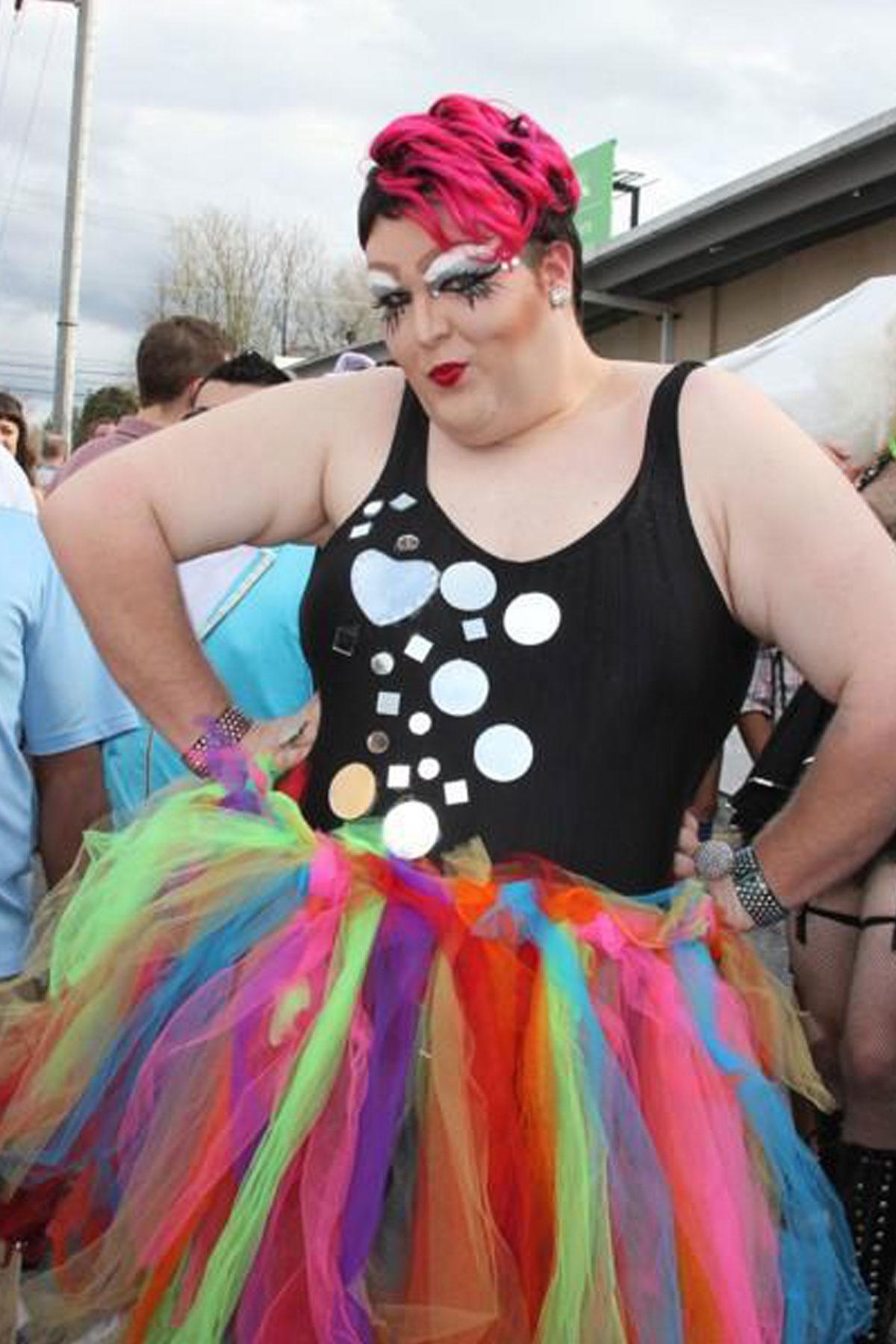 Sometimes drag makes its way to the sports bar.

Stephens is a native of nearby Athens, where local spots Go Bar and the Pub at Gameday host the Athens Showgirls Cabaret. This is classic drag with no frills, no blending, and no apologies, where every performance is guaranteed to knock you out. While Kellie, Jenn, and Alice are mainstays, the event brings in special guests from throughout the northern Georgia region. 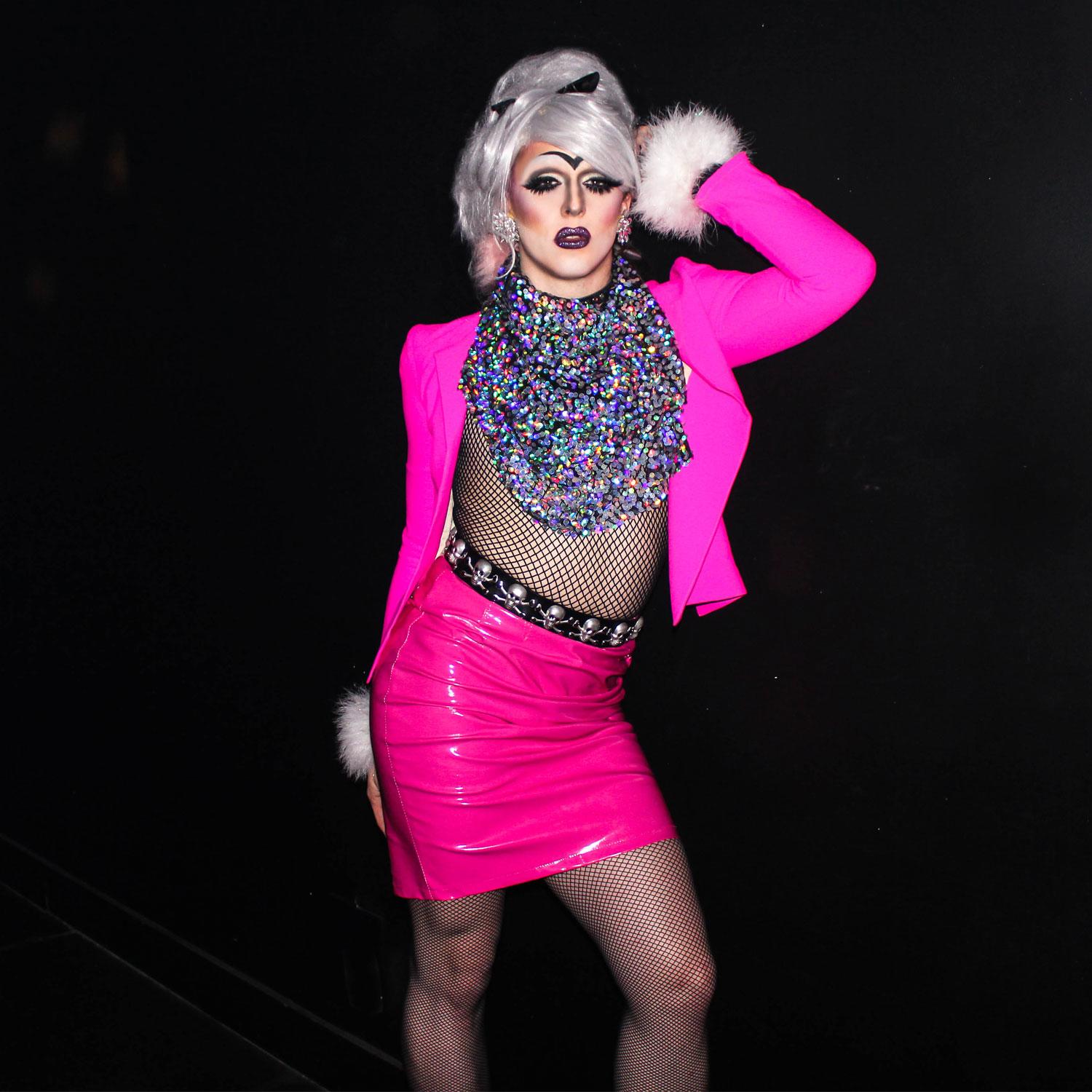 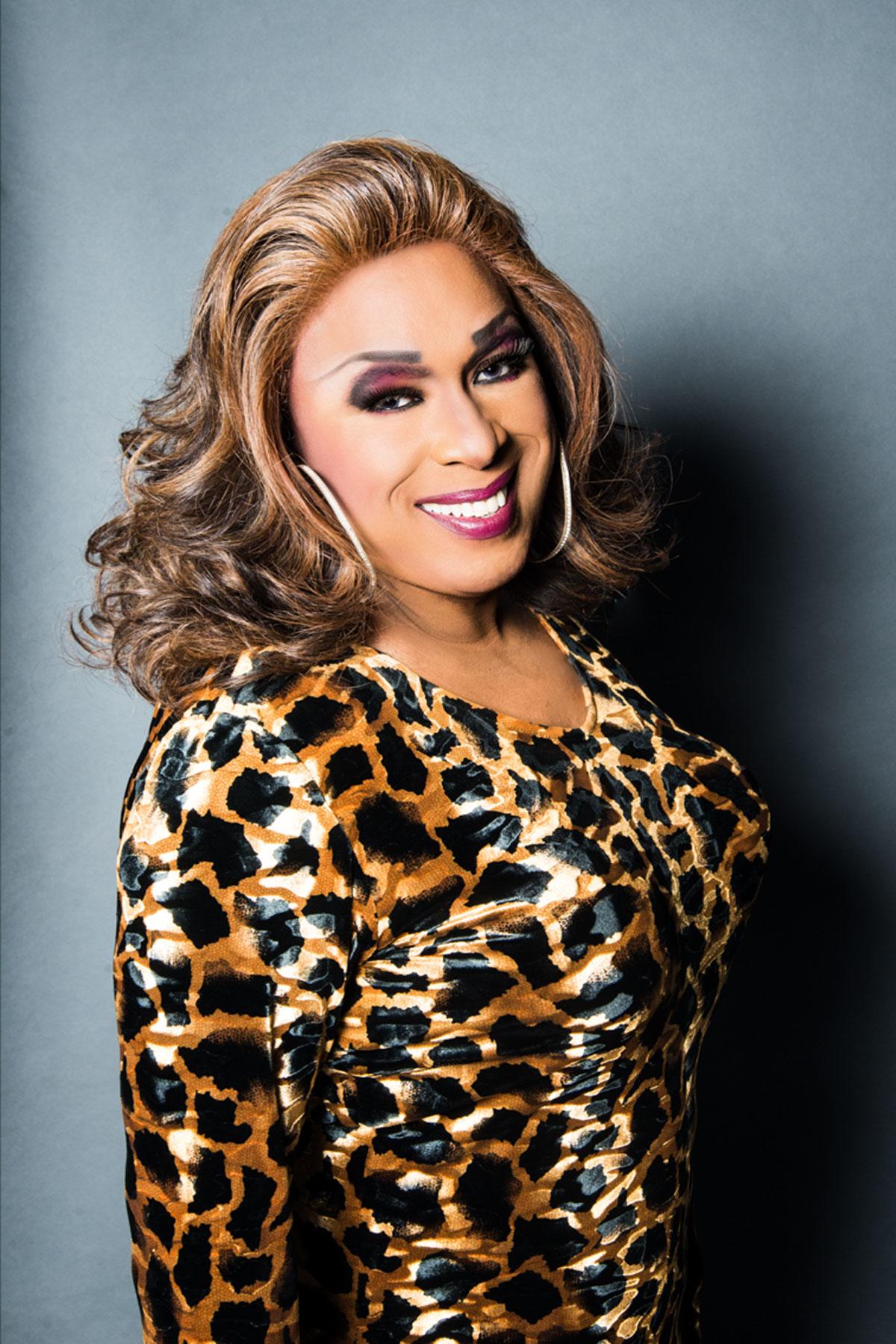 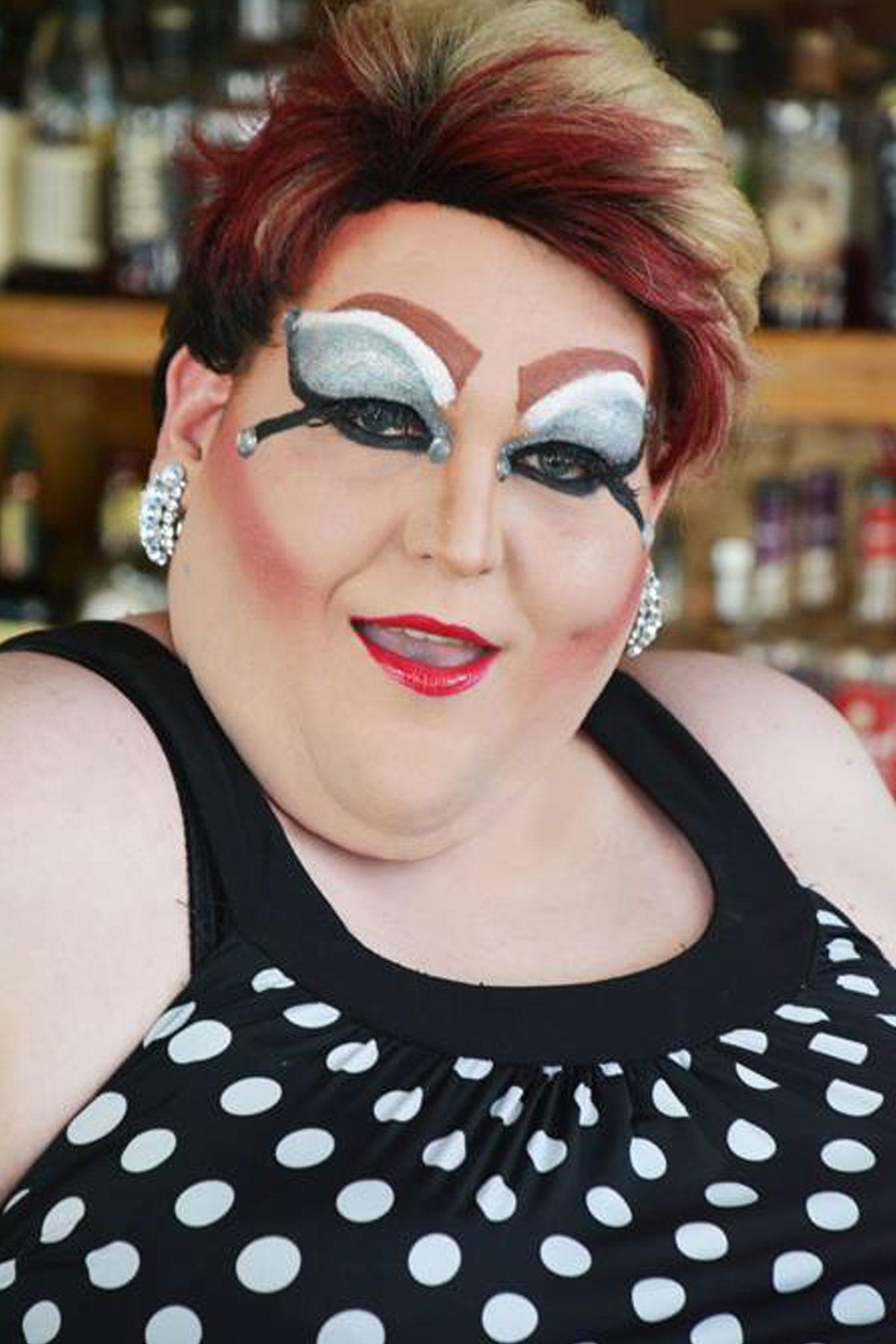 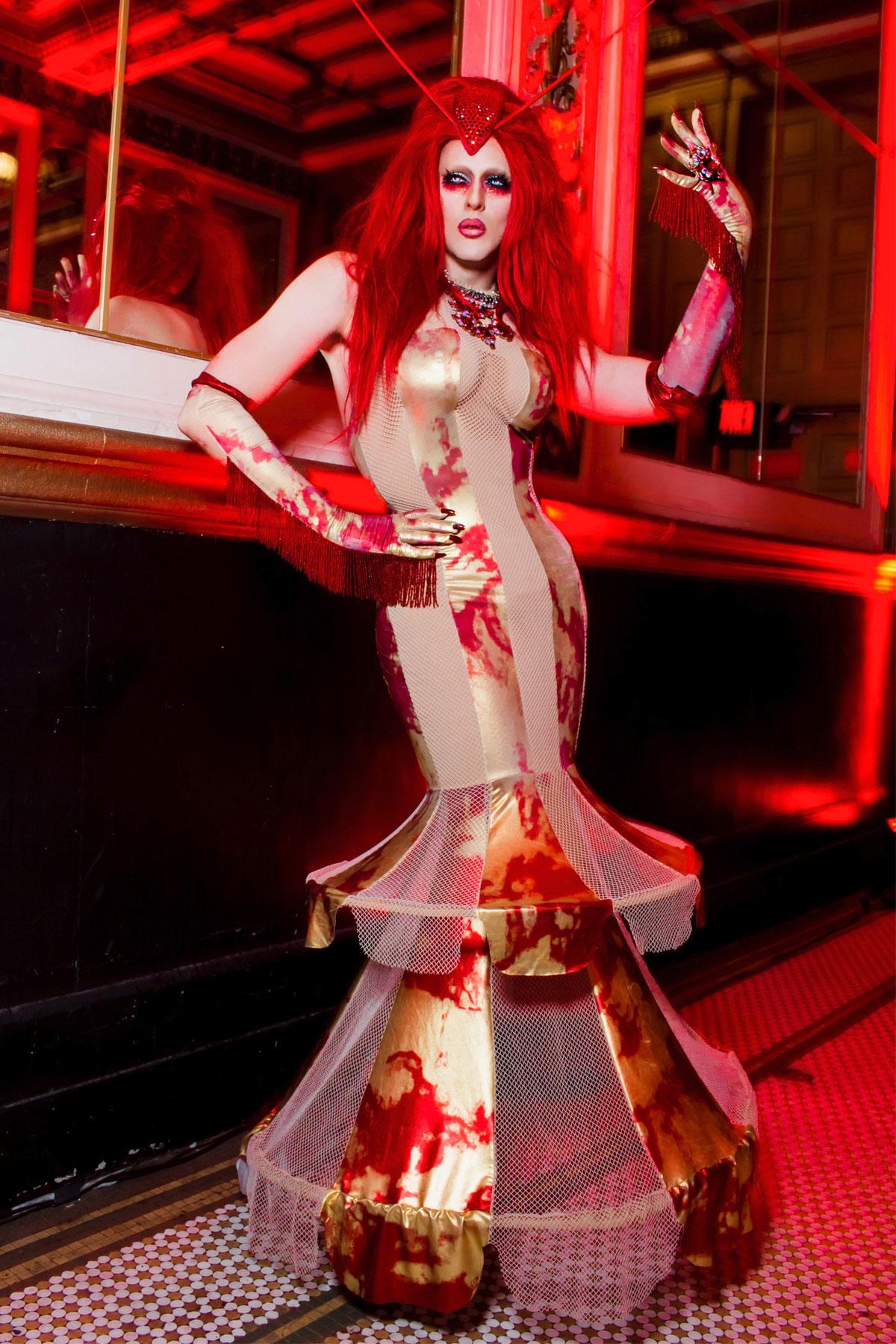 While many fans know it’s customary to tip entertainers onstage (many of whom may perform for free or low booking fees in their hometown clubs and bars), they may not realize their dollar can go a long way. Many Southern matriarchs pay tips forward to causes in their communities and nationwide.

The Lady Chablis was famous for contributing to the American Diabetes Association. Wild Cherry Sucret, who emcees shows today in support of causes close to her heart, got her start with the Armorettes. The group’s raised more than $2 million dollars for HIV charities in the South over the course of 38+ years. 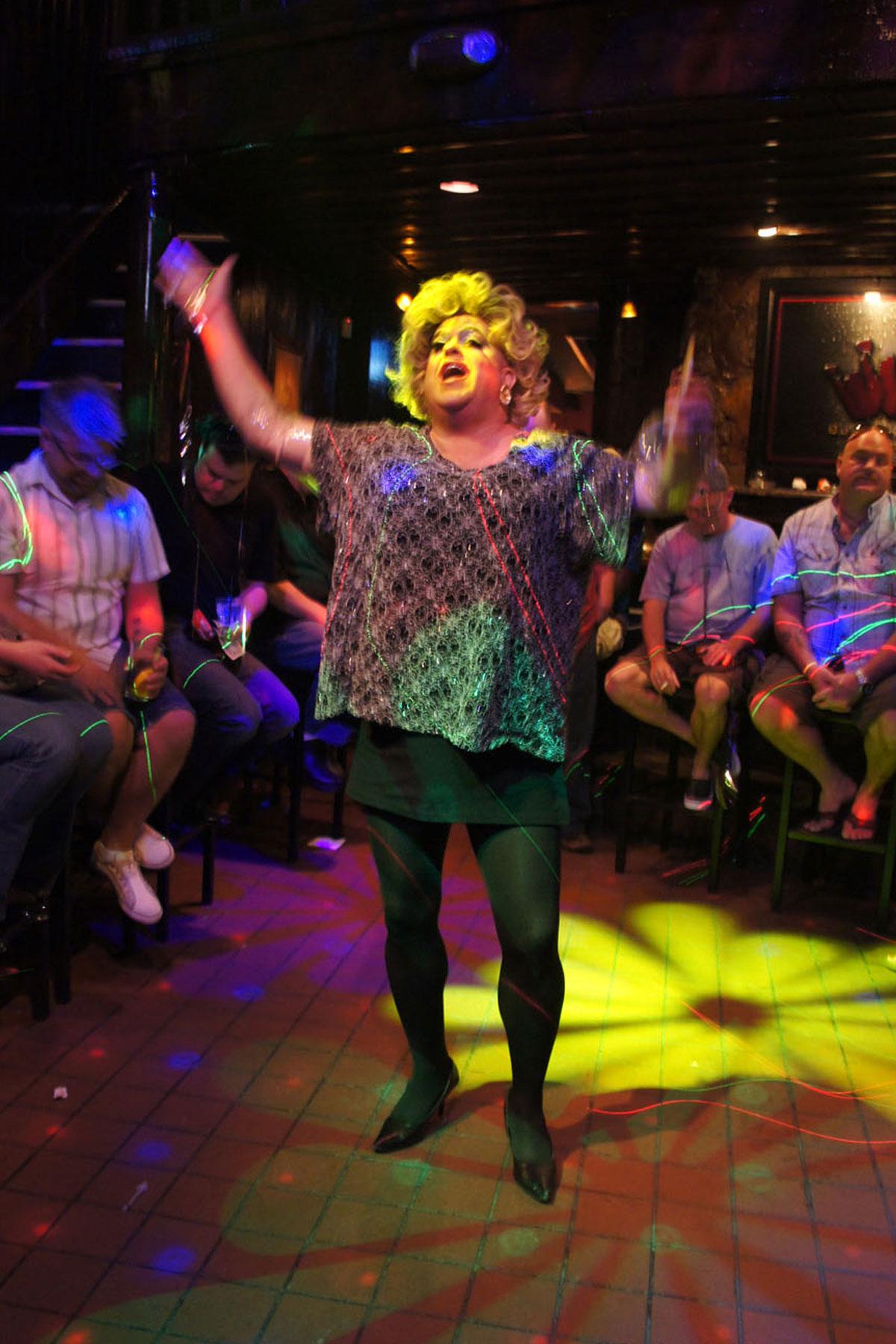 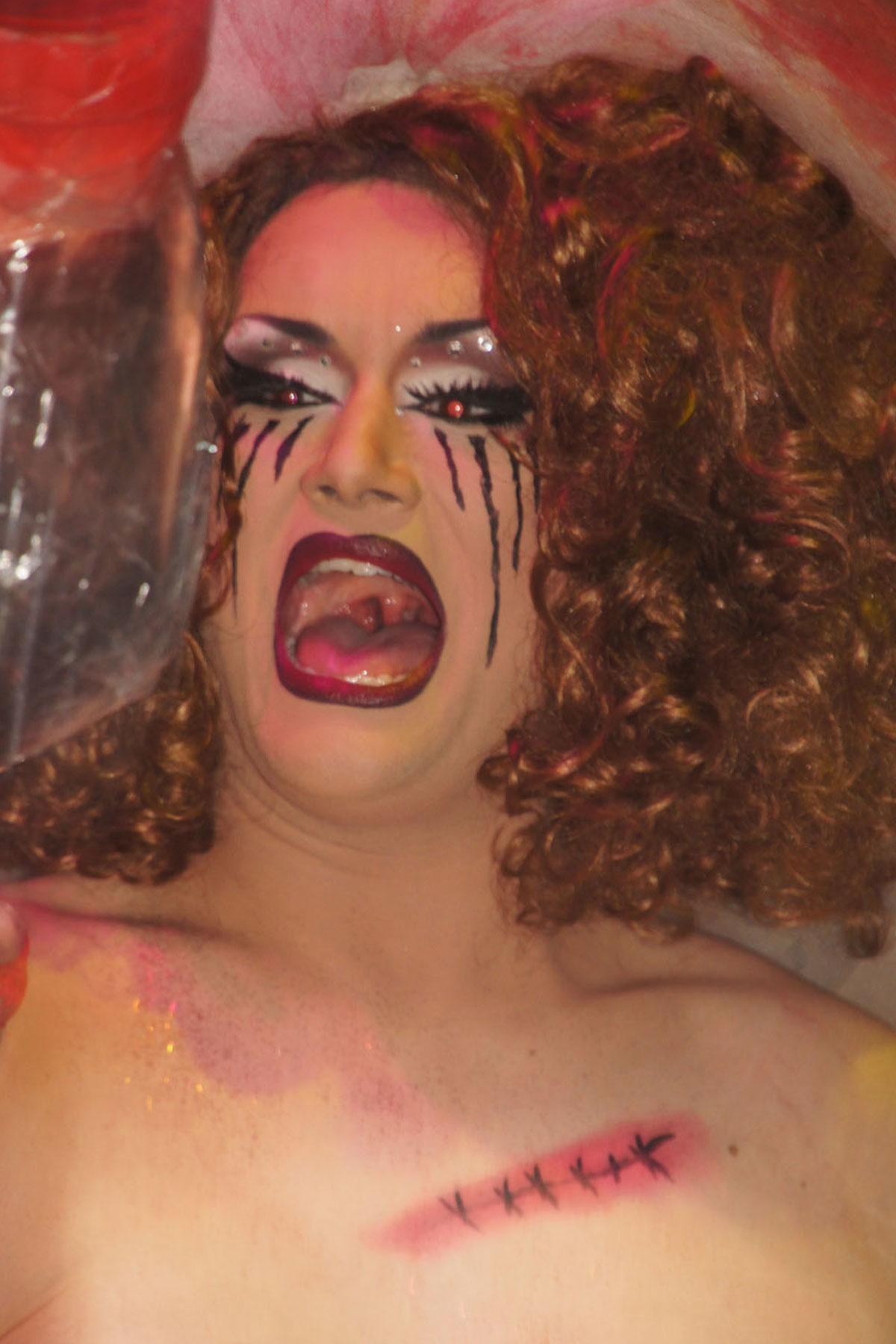 The Bayou State may be best known for its rip-roaring largest city, New Orleans, but drag extends outside far outside the French Quarter. Queens in the capital city of Baton Rouge and out in Shreveport embody the state virtue of confidence, along with a certain versatility and magnetism.

“The South’s Friendliest Gay Bar” and “Louisiana’s Hottest Dance Club” sit one mile away from each other in Baton Rouge—they’re otherwise known as George’s Place and Splash Nightclub.

Established in 1970, George’s Place is known for its “personal touch.” One look at its website’s staff bios and delightful history page will tell you why. Featuring murals by local artist Kellie Austin, George’s has gone from a hidden oasis to a club where drag performers have taken the stage for over 30 years. Wednesday nights are for Drag Bingo (followed by Cat’s Ass Karaoke), while the second and fourth Saturdays of each month feature the Krewe of Divas. It’s clear that drag is there to stay, with the mantle being passed by longstanding queens like Chica La Rouxge to up-and-comers such as Mary Jane Sparxx.

Over at Splash, La Femme Rouge bring the house down with their show Diva Nation every Thursday. With most of the performers celebrating careers of more than a decade in the central Louisiana area, it’s clear these queens have regional pride. Lady Danisha Andrews, Miranda Mann, and Josalyn Royale are among the La Femme Rouge queens who have taken audiences by storm in a number of Louisiana drag troupes.

If Baton Rouge is a bevy of drag history, then Shreveport is the home of Louisiana drag upcycling. One of the best-known clubs in town is Central Station Lounge, aptly named considering it was built in 1910 to be the central station of the Louisiana and Arkansas Railroad. It became a restaurant and museum in the late 1970s and was listed in the National Register of Historic Places in 1991, just one year after it was renovated into its current iteration.

It’s appropriate, then, that the bar is also called home by RuPaul’s Drag Race season eight alumna Chi Chi DeVayne. As famous for her trash bag couture as she is for her acrobatic splits, Ms. DeVayne woos audiences with her energy, rough-around-the-edges looks, and signature growl. In fact, it’s hard to choose a favorite catchphrase of hers from her time on the show—“I’m a cheap queen,” or “Laissez la bons temps rouler! (Let the good times roll!)”

But up in Shreveport, it’s “a mixture of pageantry with a hint of Mardi Gras.”

Chi Chi broke it down with us to give y’all a better picture of Shreveport drag. “Further down south [in the state] you find your more artistic queens, kind of like the drag that Milk does but with a southern flair, or your queens like Bianca del Rio, who are excellent comediennes and hosts.” But up in Shreveport, it’s “a mixture of pageantry with a hint of Mardi Gras.”

And the performances? Think adrenaline—the reason Chi Chi loves being a performer. “It’s all about a dancing queen here, or else you get the deer watch,” she says. When you head to Central Station, don’t forget this Drag Race Top Four queen’s recommendation: “You gotta check out my girls Sarina Styles and the Ladi Phat Kat; you will be pleased!” 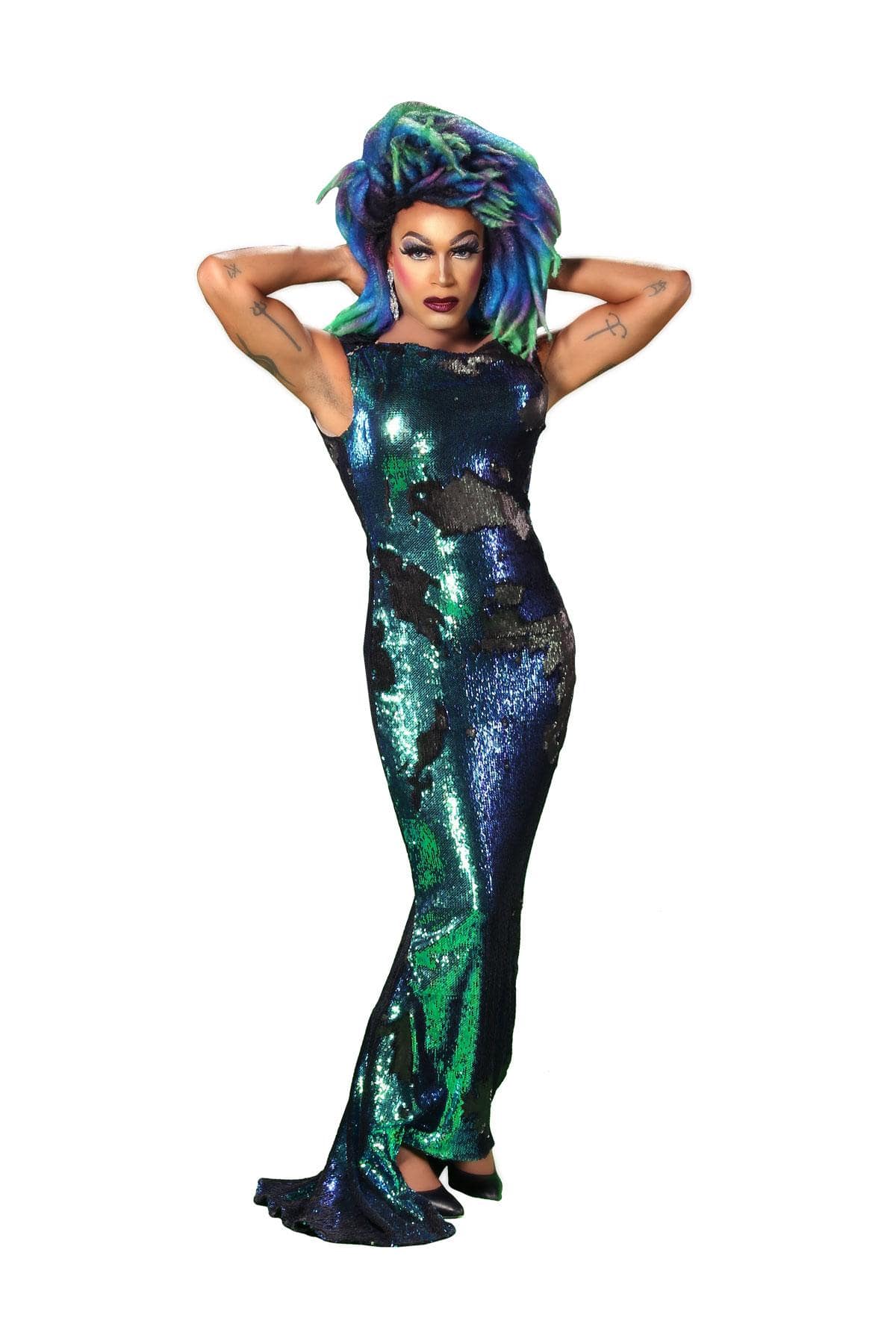 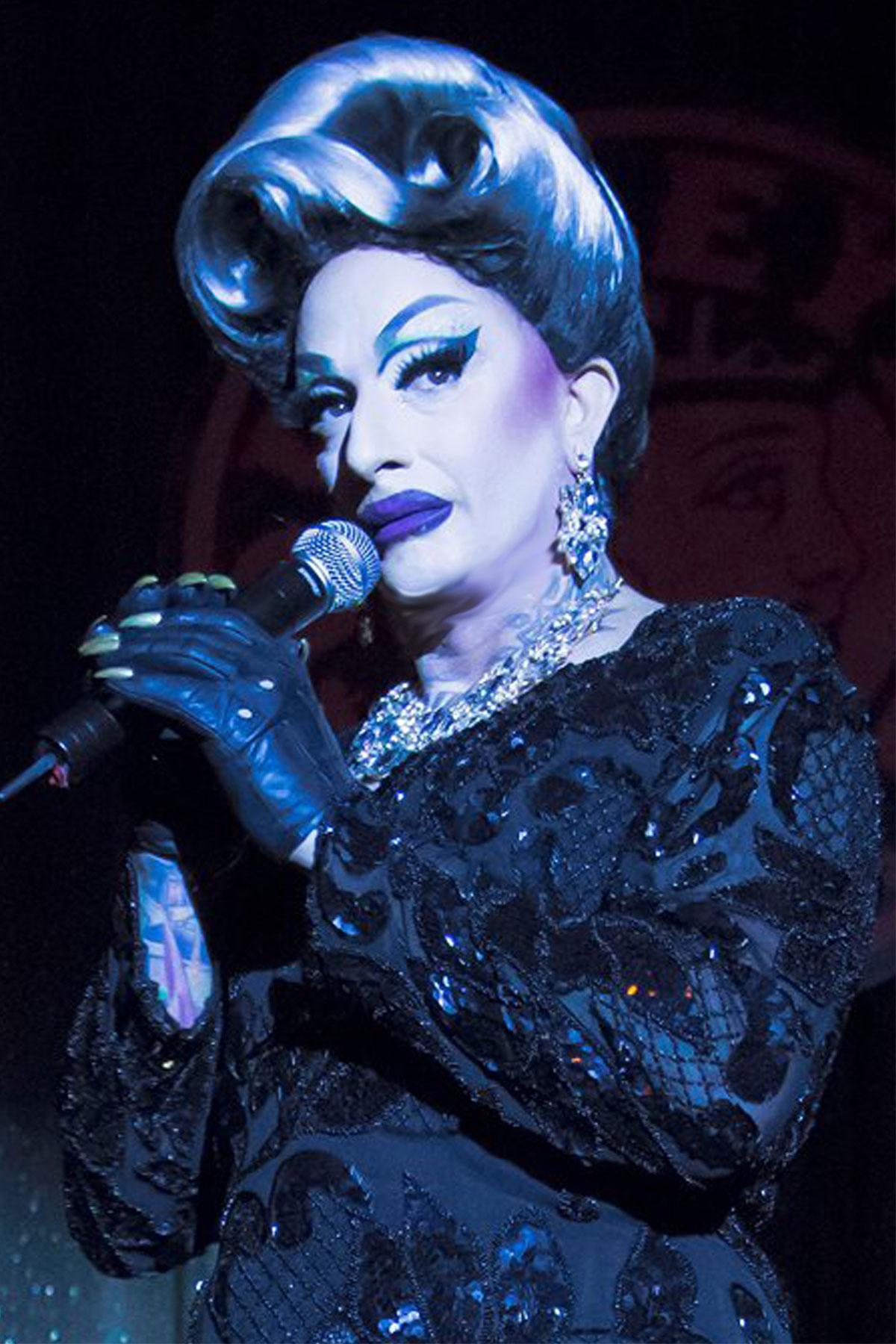 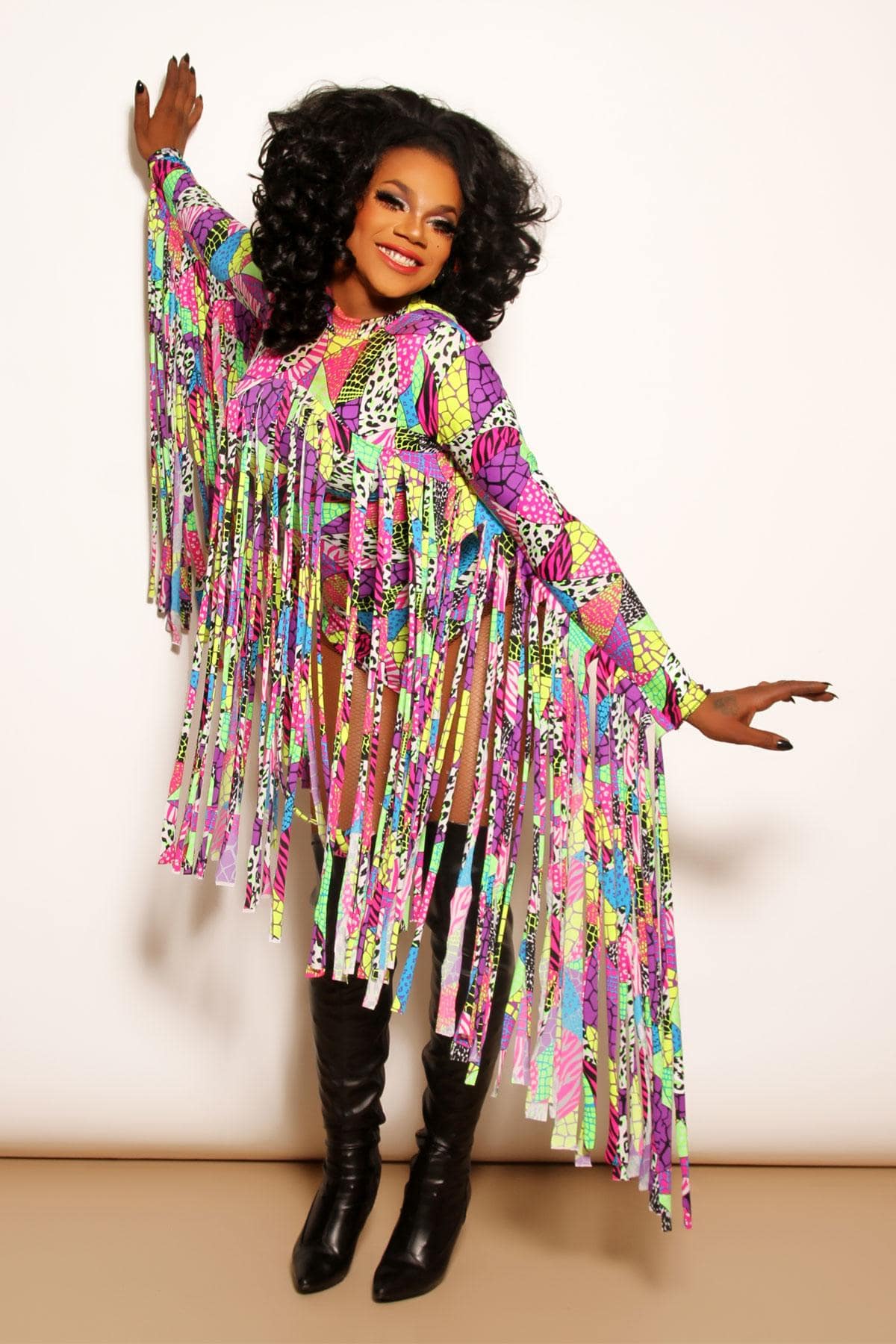 Eternal, quintessential, statuesque … these are a few of the words that encapsulate many southern drag queens. Yet drive down I-49 South from Shreveport to New Orleans and you’ll find yourself in a whole ’nother world. While it’s true that forward-thinking, creative performers can be found across the Gulf states, no city does drag of the moment quite like New Orleans.

Take, for instance, Neon Burgundy’s traveling Jock Strap Lube Wrestling shows, Slenderella’s Rips n’ Tits at Bud Rip’s, or the Sunday Jubilee at the Golden Lantern. “New Orleans is a tourist-based city which brings a variety of performance types,” Burgundy says, “live music, burlesque, circus, sideshow, even mystic readings and panhandlers holding poses for hours at a time. All of these things oftentimes combine, and when they do you witness a show like you’ve never seen and may not be able to see elsewhere.”

Witness a show like you’ve never seen and may not be able to see elsewhere.

We got a chance to speak with Burgundy’s drag mother, Vinsantos, who gave us the low-down on New Orleans drag. She arrived when the city was still a place for old school performers, “club girls that knew how to beat a pop song into the ground.”

But things have changed, and she’s had a lot to do with that. In fact, she created New Orleans Drag Workshop to help new performers get their start through a two-month crash course that culminates in a live show “draguation.” So, what’s not to be missed? 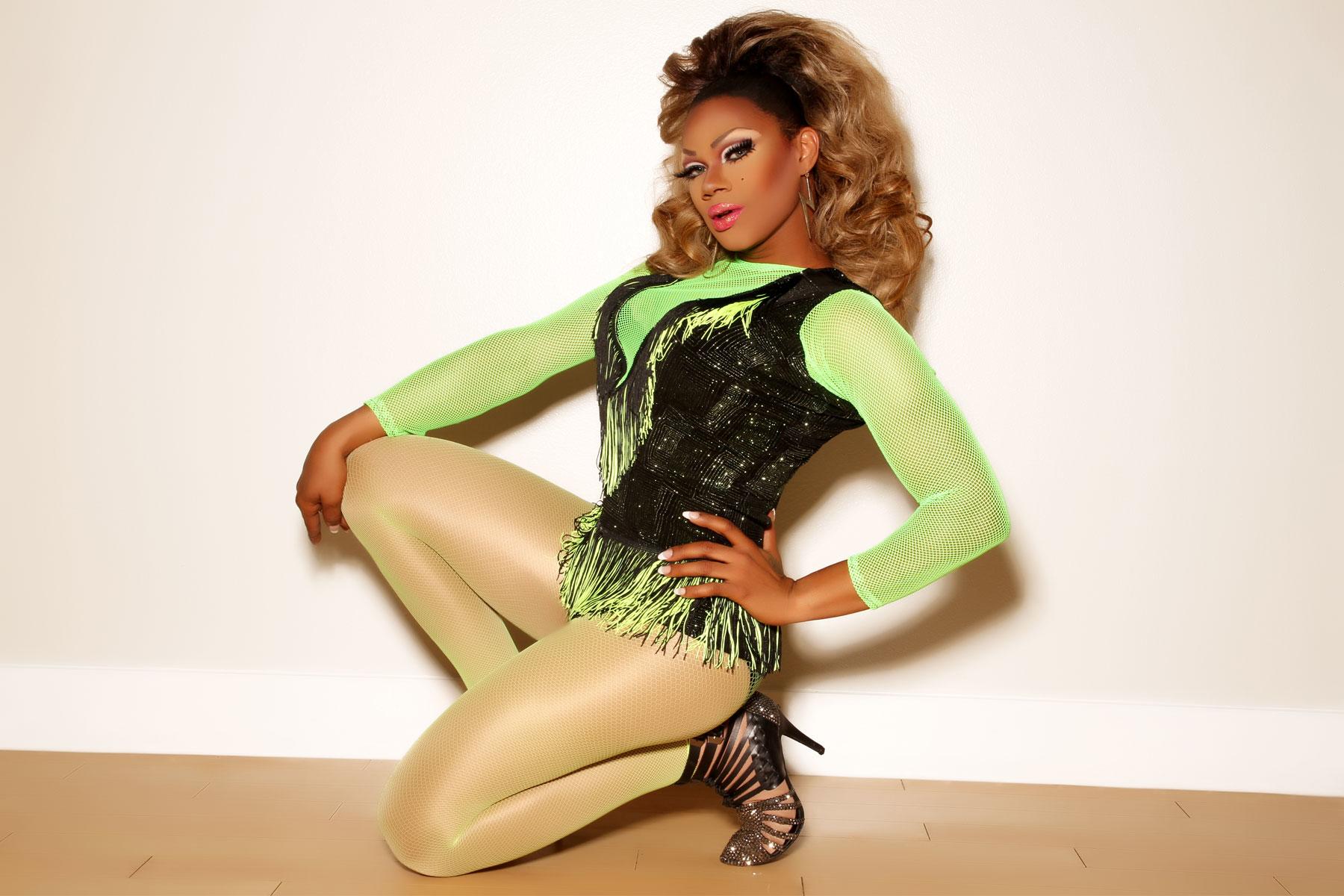 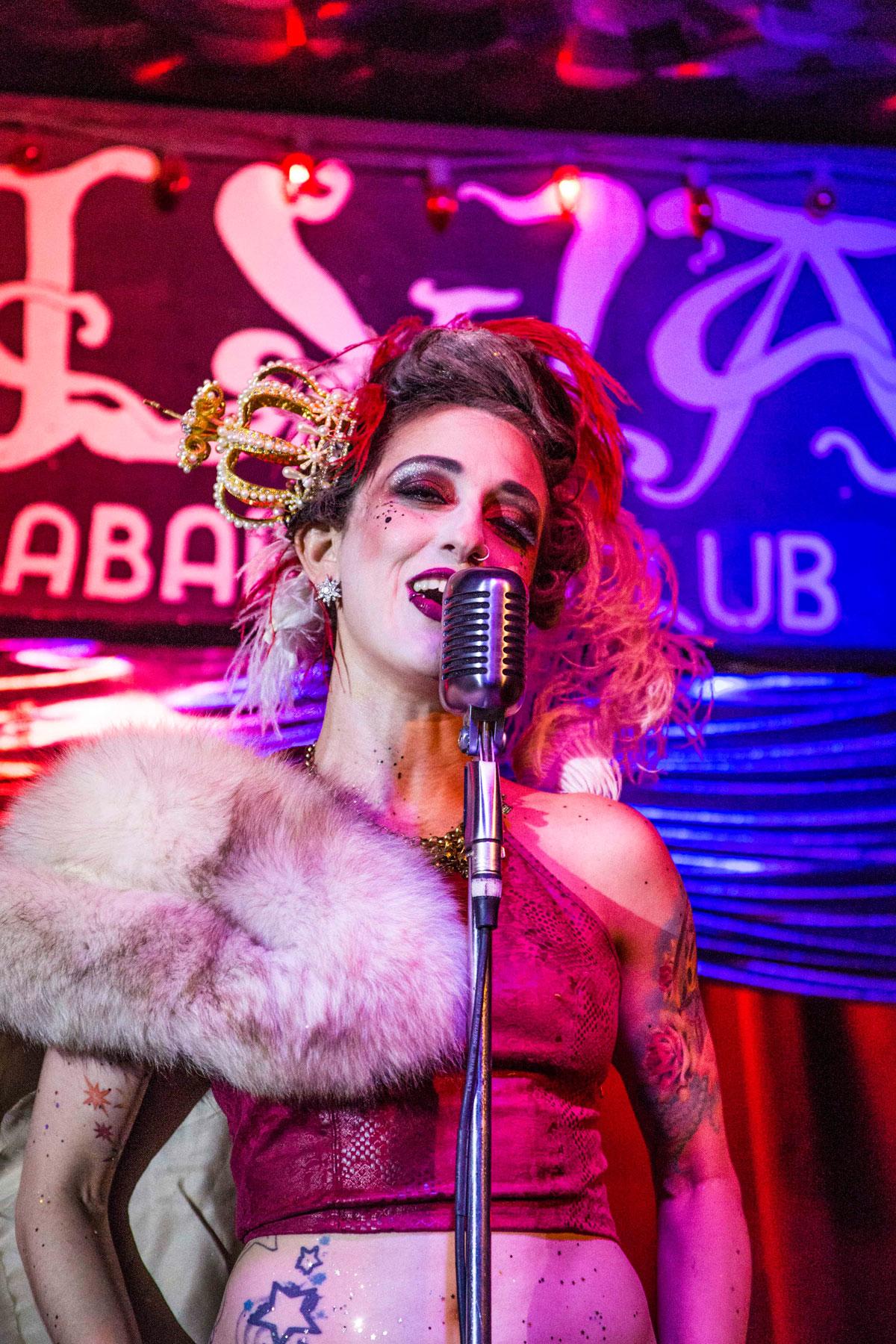 “I’ve worked very hard to make drag more accessible for both the aspiring performer and for the audiences that come to my shows,” Vinsantos says. The result? “It’s never typical. It’s never bland.”

It just might be time for you to come see for yourself.