Taking morbid curiosity to new heights (or new lows, depending on you look at it).

There are certain things about humans that have been true throughout history. We’re drawn to the forbidden and the taboo. We have a preoccupation with our own mortality that, when left unchecked, can quickly stray into the realm of questionable taste. And we like to see things that go boom.

The modern age has offered up a myriad of ways for us to indulge in these primeval fascinations. An endless stream of true crime documentaries. Monster truck rallies. But in the days before 24-hour cable news and Roland Emmerich movies, people were still getting their morbidly curious kicks. They just had to be more creative about it.

INSIDER TIPAnd before any of us get too cocky with regard to our moral superiority, just know that there will be at least a few things we do that people 100 years from now will read about and marvel at how uncouth we were.

Ah, Paree. Strolling along the Seine. Splitting a bottle of Bordeaux on the patio of a brasserie. Gawking at unidentified human remains. You know, all those classic things every tourist has to check off their Paris to-do list.

At least, this is what your recommendations would look like if you were headed to the French capital during the late 19th-century. The exhibit room of the morgue, which was open to anyone with an interest and a strong stomach, was one of the city’s most popular attractions.

As with many things that spiral out of control, the public nature of Paris’ morgue came out of the “better in theory” mode of problem-solving. In order to identify remains of unknown Parisians, the morgue would display the bodies of people on a raised slab behind a glass window pane. The city’s citizens could then walk through of their own accord and see if they knew the identities of the deceased.

What started out as a way for people to search out missing loved ones or fulfill a sort of solemn civic duty almost immediately became a spectacle for looky-loos. By all accounts, the atmosphere was that of the world’s most macabre carnival. Vendors would set up shop outside the entrance selling snacks. Plus—location, location, location—it was situated at the tail end of the Île de la Cité, i.e. the same small island occupied by Notre Dame. Talk about being able to hit two birds with one stone.

Eventually, though, Parisians as well as out-of-towners would have to find other outlets for their voyeurism and morbid curiosity. The morgue was officially closed to the public in 1907 due to moral concerns.

Before Armageddon and Twister—before even The Towering Inferno and The Poseidon Adventure—there was an even earlier form of the disaster blockbuster that took place every day, live and in person, at Coney Island’s amusement parks. Back in the late 1800s, people would flock to the recently opened parks to watch recreations of catastrophic events. These staged attractions that turned the tragic news of the day into lavishly produced events came to be known as “disaster spectacles.” The displays were so popular that one of the venues was “approximately the size of a football field” and held 12,000 spectators.

Perhaps the most notorious of these spectacles was the eruption of Mt. Vesuvius, but it wasn’t just chapters from the distant past that were reenacted at the parks. There were numerous recreations of contemporaneous natural disasters—to rave reviews, no less. According to “Disaster Spectacles at the Turn of the Century” by Andrea Sultman Dennett and Nina Warnke, the recreation of the 1890 Galveston flood (which killed 7,000) people was “heralded as a stupendous reproduction.” A souvenir program advertised the recreation of the 1889 Johnstown Flood (which killed 2,200 people) as appealing to “all, young and old, and should be seen by every visitor on the Island.” 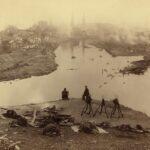 Despite their popularity, disaster spectacles faded away as the harrowing realities of World War I quelled the public’s interest in the staged catastrophes. Sealing the genre’s demise was the ironic (if inevitable) twist of fate that was two of the parks being destroyed by fires.

In England, it had been commonplace for people to attend public executions for hundreds of years. Particularly during the 18th- and 19th- century reign of the “Bloody Code”—a set of laws that made 200 crimes punishable by death. According to Severed: A History of Heads Lost and Heads Found by Frances Larsen, as many as 5,000 people would attend your average public hanging in London.

But the mid-1800s brought the proliferation of an innovation that made it so people wouldn’t have to wait until there was local execution: the train. And what quickly followed the expanding British railway system were train excursions. Thomas Cook, the founder of the eponymous travel agency, arranged his first train excursion—a trip to a teetotal rally.

But even this was preceded by an excursion that ran between the two Cornwall towns of Wadebridge and Bodmin so that visitors could witness the execution of William and James Lightfoot. The execution of the brothers (who’d been convicted of murdering and robbing a man) attracted roughly 20,000 spectators, approximately 3,000 of which had arrived via the train excursion.

The popularity of these grisly displays was undeniable. On November 13, 1849, 30,000 people were in attendance at the execution of Marie and Frederick Manning. As was routinely the case, these weren’t tens of thousands of solemn-faced onlookers overcome by an all-too-human morbid curiosity. These were rowdy occasions that brought out the worst in attendees. Charles Dickens was so fundamentally disturbed by the behavior of the spectators that had come to watch the hanging of the Mannings that he wrote a letter to The Times condemning the practice.

“The horrors of the gibbet and of the crime which brought the wretched murderers to it faded in my mind before the atrocious bearing, looks, and language of the assembled spectators,” Dickens wrote. “I am solemnly convinced that nothing that ingenuity could devise to be done in this city, in the same compass of time, could work such ruin as one public execution.”

It would seem to be an inalienable tenet of the human condition that if a thing exists, we’re going to want to see it smash into something.

And so, of course, the rise of the train during the 1800s led to the rise of the train being purposefully wrecked—much to the delight of America’s masses. The wrecks would usually be staged as a way to get rid of older trains that were being replaced anyway, with the added benefit of being able to charge admission.

For an event that was literally two trains hurtling toward each other, there were shockingly few issues or misfires. That is until Crush, Texas.

The 1896 exhibition was put together as a publicity stunt by William George Crush, a passenger agent who worked for the Missouri-Kansas-Texas Railroad. He’d heard about the other wrecks and decided it would make for some good publicity for the railroad. Nearly 40,000 people traveled to the staging grounds 14 miles north of Waco. Engineers told Crush that the trains’ boilers were resistant to rupturing, allegedly making the risk of explosion a non-issue, and so the staging went forward.

The two trains (each pulling cars full of railroad ties) exploded, and the resulting debris killed at least two people and seriously injured six. It should have literally been the staged train crash to end staged train crashes. Instead, it turned out to be the darkest as well as strongest argument for “there’s no such thing as bad publicity.” The railroad was so pleased with the national coverage that Crush was rehired (after briefly firing him) and staged train crashes continued unabated for decades.

In fact, it took an unremarkable but decidedly casualty iteration for people to lose interest in staged train wrecks in Los Angeles. In 1906, 6,000 paying spectators gathered to watch a head-on collision at Agricultural Park (now the LA Memorial Coliseum). But when the trains collided “there was a dull, muffled ‘chunk’…They reared slightly, settled down and stopped,” wrote The Times in its coverage of the event. “When the momentary hope that the boilers might explode and do something worthwhile passed, one said to himself, ‘Is that all?’”

The staged wrecks faded away nationwide at the onset of the Great Depression as the very premise (destroying something that was functional for no other reason than spectacle) was deemed as excessive.

Though things like staged train wrecks and public hangings have faded from day-to-day life and into the annals of history, all you need to do is look to the renewed interest in traveling to sites like Pripyat to know that our species’ interest in the dark and disastrous hasn’t waned. Visiting such places can be an illuminating experience, but make sure you’re respectful in your intent and to center the stories and lives of the people that have been affected.