The world is a mighty big place, and that means there's no shortage of tropical islands that draw cruise ships, yachts, and sailing vessels to their shores. The challenge for you, then, is to determine which destination is right for your next romantic getaway. Here’s a look at five tropical cruises that should be at the top of your list this year. 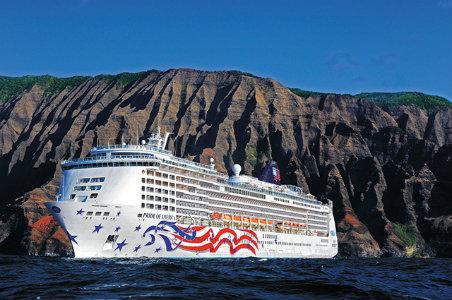 Couples planning honeymoons and special anniversary vacations almost always consider a trip to Tahiti and all of the Society Islands within the boundaries of French Polynesia. Tahiti, Bora Bora, Moorea, Huahine, Moorea, Raiatea, and Taha’a are just a handful of the gorgeous tropical islands located in the chain. Here you’ll find some of the world’s best beaches, extraordinary snorkeling and diving spots, and French-inspired cuisine that's fused with tropical fruits and Tahitian vanilla beans.

Fans of motor-sail-yachts are eagerly awaiting the return of Windstar Cruises to Tahiti. Starting this spring, the line will sail its intimate 148-guest Wind Spirit in the region from May to November.

Princess Cruises will also visit the Society Islands multiple times this year. Book a 10-day itinerary aboard the Pacific Princess or Ocean Princess. Both ships accommodate up to 824 passengers.

You may assume that French Polynesia and Hawaii offer up the same tropical island paradise, but that’s not exactly true. Hawaii, still amazingly beautiful, is much more developed than the Society Islands. That can be a good thing: You’ll explore the modern cities of Honolulu on Oahu and Kahului on Maui, and enjoy fine dining courtesy of celebrity chefs like Alan Won, Roy Yamaguchi, and Beverly Gannon on nearly all of the islands. Relax and unwind on Hawaii's exquisite beaches, or get active with activities that range from zip-lining and horseback riding to diving, snorkeling, and so much more. You can even bike the face of a volcano on Maui!

There are only two cruise lines that sail within the Hawaiian Islands: Norwegian Cruise Line via its 2,500-passenger Pride of America, and Un-Cruise Adventures with its 36-passenger luxury yacht Safari Explorer.

Continental US to Hawaii

Princess Cruises offers regularly scheduled voyages from the West Coast of the United States to Hawaii. The Star Princess sails round-trip out of Los Angeles, and Grand Princess does a similar 15-day voyage from San Francisco. Both include a total of nine days at sea, as well as calls on the Big Island, Oahu, Kauai, Maui, and Ensenada in Mexico.

The Caribbean offers dozens of romantic island itineraries, so instead of focusing on Eastern or Western Caribbean voyages, let’s focus on the most romantic ships that sail this region.

You couldn’t pick a more romantic ship than mega-yachts SeaDream I or SeaDream II from the venerable SeaDream Yacht Club. The ships cater to just 56 couples, so the crew gets to know you by name and always anticipates your wants and needs. There are comfy Balinese sun beds on deck, and you can even book a special experience to sleep under the stars. Fine wine is paired with every meal, and the food rivals anything you’ve enjoyed at restaurants on land. The ships also have their own aft marina platforms from which you can swim, snorkel, or take out a kayak or a Jet Ski.

Bermuda may be smack dab in the middle of the North Atlantic Ocean, but it’s one of the most romantic tropical islands you’ll ever visit by cruise ship. This is the land of pink beaches and limestone cliffs. Blending British Colonial sensibilities with a laid-back island feel, Bermuda offers numerous activities, including shopping, spa treatments, golf and tennis, kayaking, sailing, fishing, and surfing. The coral reefs are stunning, and there are many shipwrecks that you can explore during snorkel and dive sessions. There’s also an impressive culinary scene on the island, with choices ranging from old-timey pubs to special occasion restaurants.

Several lines make the trip to Bermuda from the East Coast from early April through October each year. All ships overnight at King’s Wharf on the West End of the island at the Royal Naval Dockyard. Five-night voyages give you two sea days and two days at King’s Wharf, while seven-night cruises allow three days on the water and three days in Bermuda.

Also from Bayonne, the 2,450-guest Celebrity Summit sails a seven-night route. Norwegian Cruise Line offers seven-night Bermuda getaways from New York City aboard Norwegian Breakaway, and from Boston on Norwegian Dawn. Norwegian gets the award for sailing both the largest ship (Breakaway at 4,500 passengers) and the smallest ship (Dawn at 2,224) to Bermuda.

If you want to set off on a true adventure, consider cruising around the islands of the Seychelles in the Indian Ocean. This is home to giant tortoises and white-sand beaches strewn with huge boulders that have been smoothed by the ocean’s waves. You can hike through rain forests or spend your time snorkeling and diving offshore. If you’ve already been to Hawaii and Bora Bora, make the Seychelles your next destination.

Variety Cruises offers seven-night voyages aboard the 44-guest, twin-hulled Pegasus. Despite the ship’s small size, it features a lovely restaurant, library, swim platform, and spa. The cruise calls on the islands of Mahe, Curieuse, Cousin, Aride, St. Pierre, Praslin, La Digue, and Moyenne. It’s the perfect way to see the diversity of this unique island chain.