4 Great Cruises from Baltimore in 2014 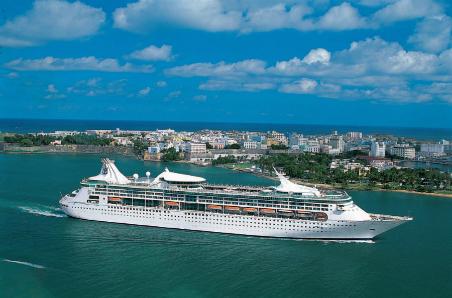 There’s something special about living near a city like Baltimore: When you want to escape, you can head to the port right off I-95, put your car in long-term parking, and board a ship in search of new experiences near and far. Though you may not be aware of it, Baltimore is growing its reputation as a homeport city; if you haven’t thought about booking a cruise out of the “Crab Cake Capital of the World,” now may be the time. According to Maryland’s Department of Transportation, 250,000 travelers sailed out of the Port of Baltimore in 2012 and, in 2013, Royal Caribbean’s newly renovated Grandeur of the Seas joined the ranks of the ships that call the port home.

CRUISE TO THE BAHAMAS

If you're sick of cold, gray skies, a trip to the sunny Bahamas may be just what you need to get through the rest of this ugly winter. Carnival Pride, a Spirit-class ship, homeports out of Baltimore part of the year (and Tampa for the balance). While this is an older ship—she made her debut in 2002—it’s a favorite because of its size. In today’s world of mega cruise ships, Carnival Pride is a “mid-size” ship that welcomes 2,124 travelers per cruise. The ship still has everything you may need at sea—from nearly a dozens bars to an array of restaurants and in-room dining to Broadway-style shows and a terrific kids program. This itinerary to the Bahamas includes three days at sea so go ahead and treat yourself and book a few spa treatments and spend at least one full day by the pool. The ship stops at Port Canaveral near Orlando, where shore excursions include day trips to Walt Disney World, Universal, and Sea World as well as activities like canoeing and kayaking. This cruise also calls on Nassau and Freeport in the Bahamas. A lot of people spend the day in Nassau at Atlantis, but the line also offers options like a beach day at Balmoral Island or a catamaran sail and snorkel trip. More snorkeling adventures can be found in Freeport and there’s also a fun dolphin encounter.

Not everyone will be able to snag vacation time for a cruise this winter but there are also excellent options out of Baltimore form April through October. Royal Caribbean’s Grandeur of the Seas offers six- and seven-night itineraries to Bermuda. Both options include three nights docked at Kings Wharf plus two or three sea days. Beaches of pink sand, dramatic cliffs, quaint villages evoking the country’s British roots, and green-as-can-be golf courses are just part of what makes Bermuda so intoxicating. Most shore excursions are active, like scuba, snorkeling, fishing, and kayaking, but you can also opt to be more of an observer with Royal Caribbean’s island exploration tours and glass-bottom boat excursions. While the 1,950-passenger Grandeur of the Seas is one of the line’s oldest ships, launched in 1996, she underwent a $48-million upgrade in 2012 and now has many of the same features as Oasis-class ships. The cabins were upgraded and new dining options were added, making this ship is an excellent choice for a weeklong getaway.

CRUISE TO THE WESTERN CARIBBEAN

Grandeur of the Seas also offers a 10-night Western Caribbean itinerary out of Baltimore with two sea days followed by stops at Labadee, Haiti; San Juan, Puerto Rico; Charlotte Amalie, St. Thomas; and Philipsburg, St. Maarten before spending three more days at sea and returning to port in Maryland. The longer length of this cruise makes it popular with people—like retirees and those with young children who aren’t yet in school—who can take off more than a week at a time.

For people who think they’ve already sailed every itinerary there is, we suggest American Cruise Lines' glorious seven-night Chesapeake Bay voyage that blends just the right amount of history, culture, and the great outdoors. The cruise takes guests to Yorktown and Williamsburg, Virginia, to view Civil War battlefields and colonial homes. The ship also calls on Tangier Island in Virginia along with Crisfield, Cambridge, Oxford, St. Michaels, and Annapolis in Maryland. From aquariums to National Historic Landmarks and the U.S. Naval Academy to the Chesapeake Bay Maritime Museum, you’re guaranteed to visit places you’ve never been before. Three ships—American Glory, Independence, and American Star—sail this unique itinerary in May, June, and November.