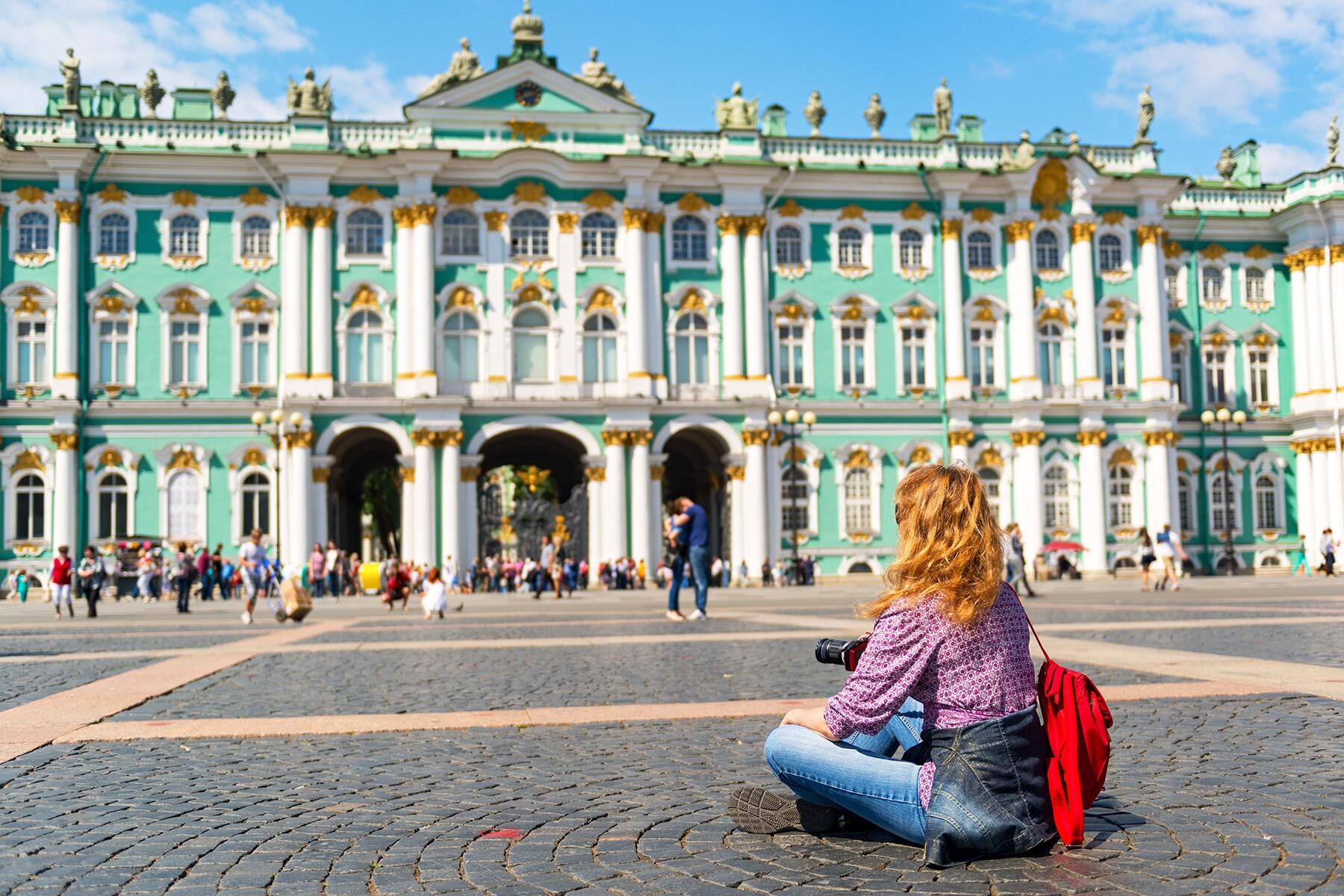 With near-infinite nightlife options, from pre-Hispanic liquors to detonating gunpowder, this Colombian city may be the hemisphere’s happiest.

The Latin American slang word for “partying” is La rumba. In the festive lands below the equator, it can break out just about anywhere, given warm bodies, tunes, and a bottle or two. However, if you’re looking to see it at maximal expression, you need—and here we’re not talking mere suggestion, but an honest-to-God imperative—to hit up Bogotá, Colombia’s all-things-in-excess capital.

Why? Because more even than other South American megalopolises, Bogotá offers a bewildering spate of options for nocturnal socializing. Dignified or decadent, high heels or hipster vans, it’s all here, and unless you’re lacking a pulse, you’re bound to be infected by the uniquely Latin alegría (joy) that gets hips and hearts swaying in the land of Shakira—which, incidentally, has earned it a consistent spot among the world’s happiest places per Gallup’s Report on Global Emotions.

The following primer will help you get your rumba on. And no, dancing shoes are not optional. 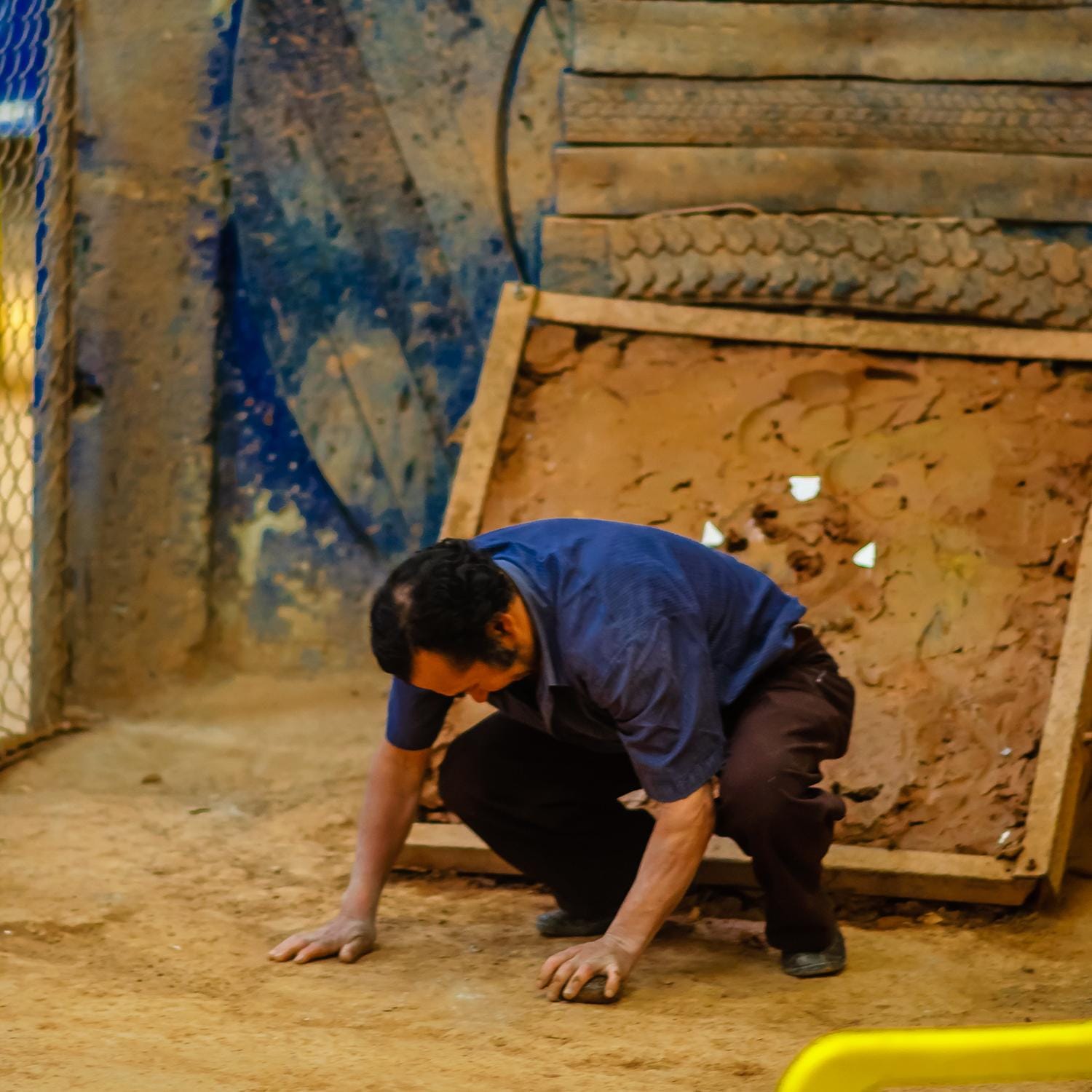 Like seeing things go bang? Yes? What about enjoying those bangs while catching a serious buzz? If this idea has your drunken inner pyro gleefully rubbing his or her hands, you might need to steer clear of tejo, the uniquely Colombian pastime that has a fair bid to be the most outlandish pretext for chug-a-lugging yet devised. The idea is simple: throw a metal puck at a dirt mound and watch the buried packets of gunpowder explode. Inevitably, rolos (Bogotá natives) turn it into a drinking game, in which whole cases of Poker or Águila, their cheap brews of choice, get quaffed at alarming rates. But hey, when you’re warming up for a long night at the discos, it’s all part of the drill. Club de Tejo de la 76 is a recommendable spot to try it all out. Heck, between flammable materials, drunken partygoers, and flying metal, what could possibly go wrong? 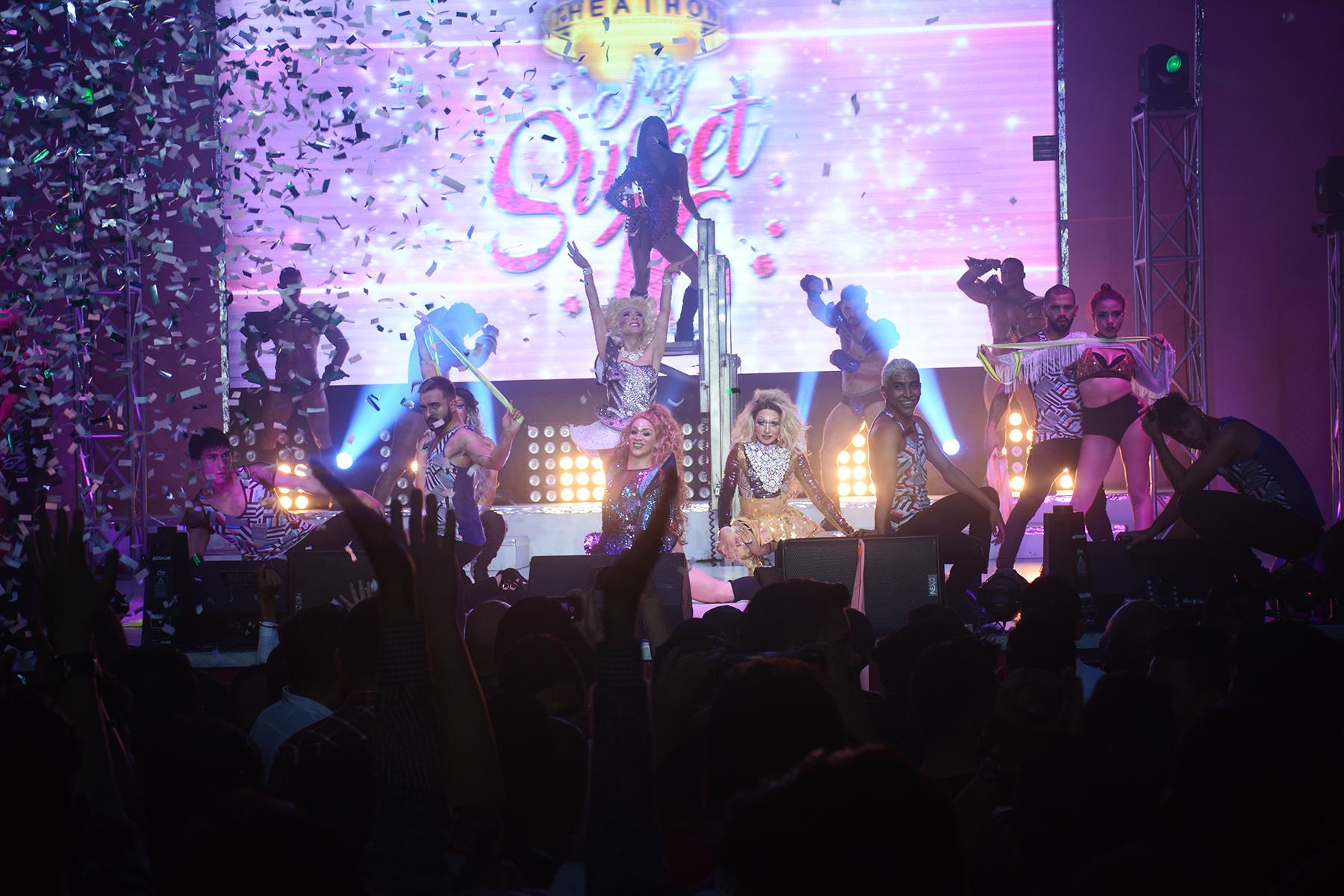 The Biggest Gay Disco in the Americas

Here, size definitely matters. In the labyrinth of salas, there are thematic rooms for every taste. Drag contests? Check. A skull-filled Mexican cantina? Check. Gay speed-metal bands? Check. Xanadu-style open-air patios? Check. It’s all here, and all for a steal of a cover charge ($10 to $20, depending on the event scheduled), which includes open bar on Colombian national liquors and a truly welcoming environment whatever your age, race, or amorous affiliation.

INSIDER TIPThe Halloween party here is to die for. 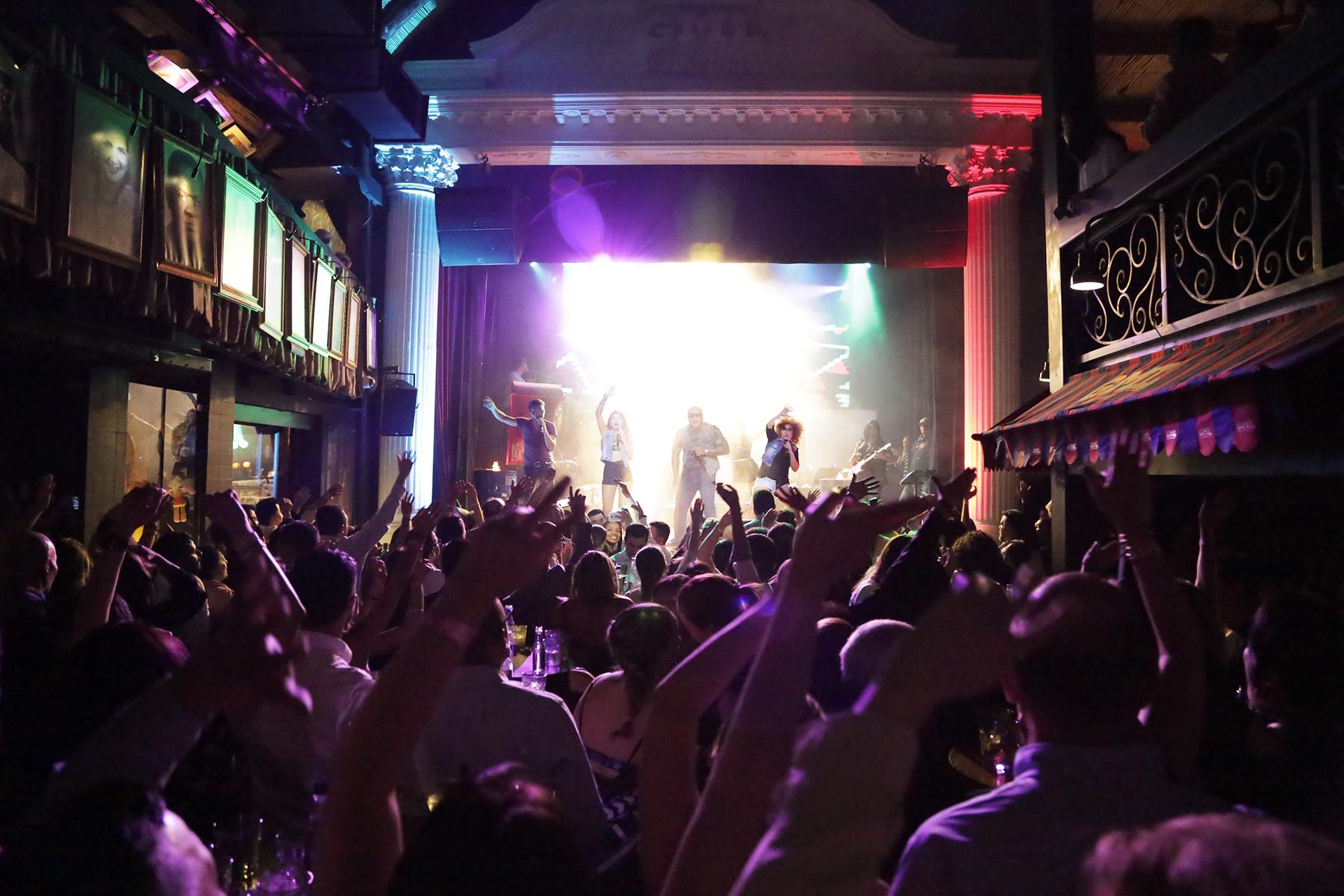 Gringos typically consider Shakira to be Colombia’s hottest export. In Latin America, however, pop singer Carlos Vives is even more popular than She of the Hips That Don’t Lie, with a long string of mega-hits, like “Robarte un beso” and “La tierra del olvido,” that stretches back 20 years. Actually, the two teamed up for the billion-selling “La bicicleta” in 2016. If you’re looking to explore the tropical luxuriance of Colombia’s native grooves, Vives’s restaurant/club, Gaira Café, is one of the best places to do so. Here guests can sample genres like the accordion-fueled vallenato and the Afro-Caribbean champeta, all while dining on coastal-inspired delicacies. As an added bonus, Vives himself has been known to drop in for impromptu numbers when he’s in Bogotá. If you go, step lively: tickets for weekend shows sell out quick.

How old-school is bowling at this retro-chic nightspot? Let’s put it this way: instead of automatic pinsetters sweeping the lanes after you bowl a washout, sweaty runners—and they do indeed run—physically swoop in to reset the pins by hand. “Chinomatics,” they’re called, and their newsie caps and red bowties take Bolera San Francisco’s clientele back to the ‘40s, when Jorge Eliécer Gaitán, Colombia’s most legendary político, used to host meetups there with his minions.

The late politician would barely recognize the joint today. Vinyl sofas, neon lights, pulsing electronic music after midnight on weekends—such are the updates recently introduced by the management, which has also cobbled together a (surprisingly good) lunch and dinner menu for nearby office workers. For rolos, though, the main attraction is still the after-hours opportunity to bowl a few frames before grinding with their friends on the dance floor. Only, be careful not to play for money; rumor has it those Chinomatics can be persuaded to give “handicaps” to big-tipping customers…

“Too much, that magic bus,” sang The Who. And indeed, this party-on-wheels is very much over-the-top. Veterans of South American travel will recognize chivas as retrofitted school buses that haul passengers throughout the Andes. In Bogotá, however, you can rent one to party in as you cruise the city ‘til dawn. The zanily-colored vehicles sport dance floors, full bars, and yes, strobing lasers. Additionally, their cordial drivers chauffer you around Bogotá’s poshest barrios before treating you to a stunning hillside panorama at the night’s end. Several companies offer different routes and packages, so do your homework before rolling out to rumbear. 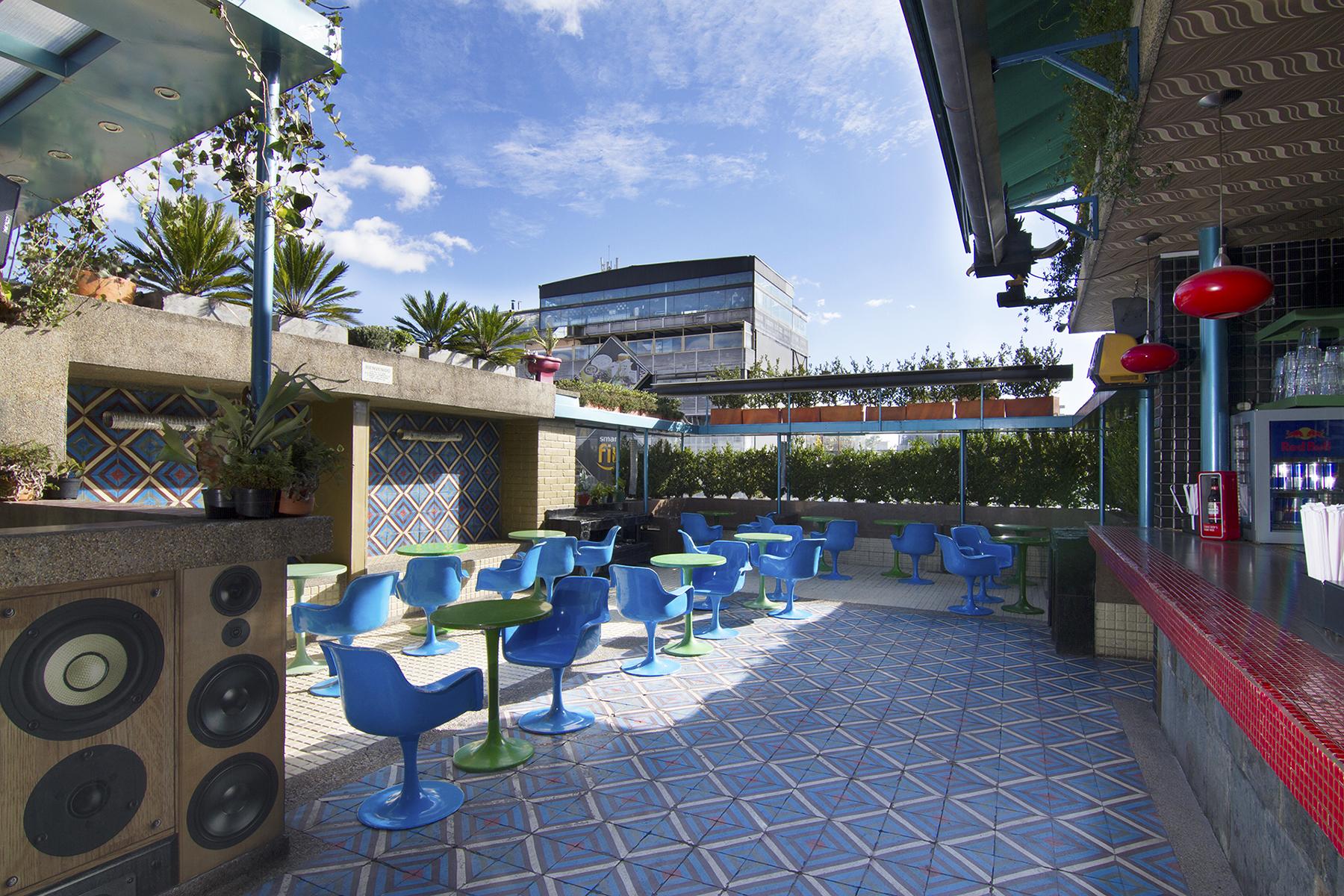 In the swirl of galaxies that is Bogotá nightlife, the Zona T is a supernova, sucking all other party zones into its orbit. Stretching for more than 30 square blocks, it’s made up of wall-to-wall bars, restaurants, and discos for all tastes and budgets, as well as 1980s rock to son cubano, and styles from come-as-you-are casual to strut-it glamour. A strong police presence ensures maximum safety. On Fridays and Saturdays, the district positively overflows with youth and ebullient spirits. Good spots include Armando Records, a four-story tower of super-hedonic power, and El Coq, a more intimate venue with an open terrace and more varied rhythms. Better yet, just wander around and see where la rumba happens to be that night. And, oh yes, best to rest up beforehand—the party ain’t over ‘till the last rumbero collapses at 7 a.m. 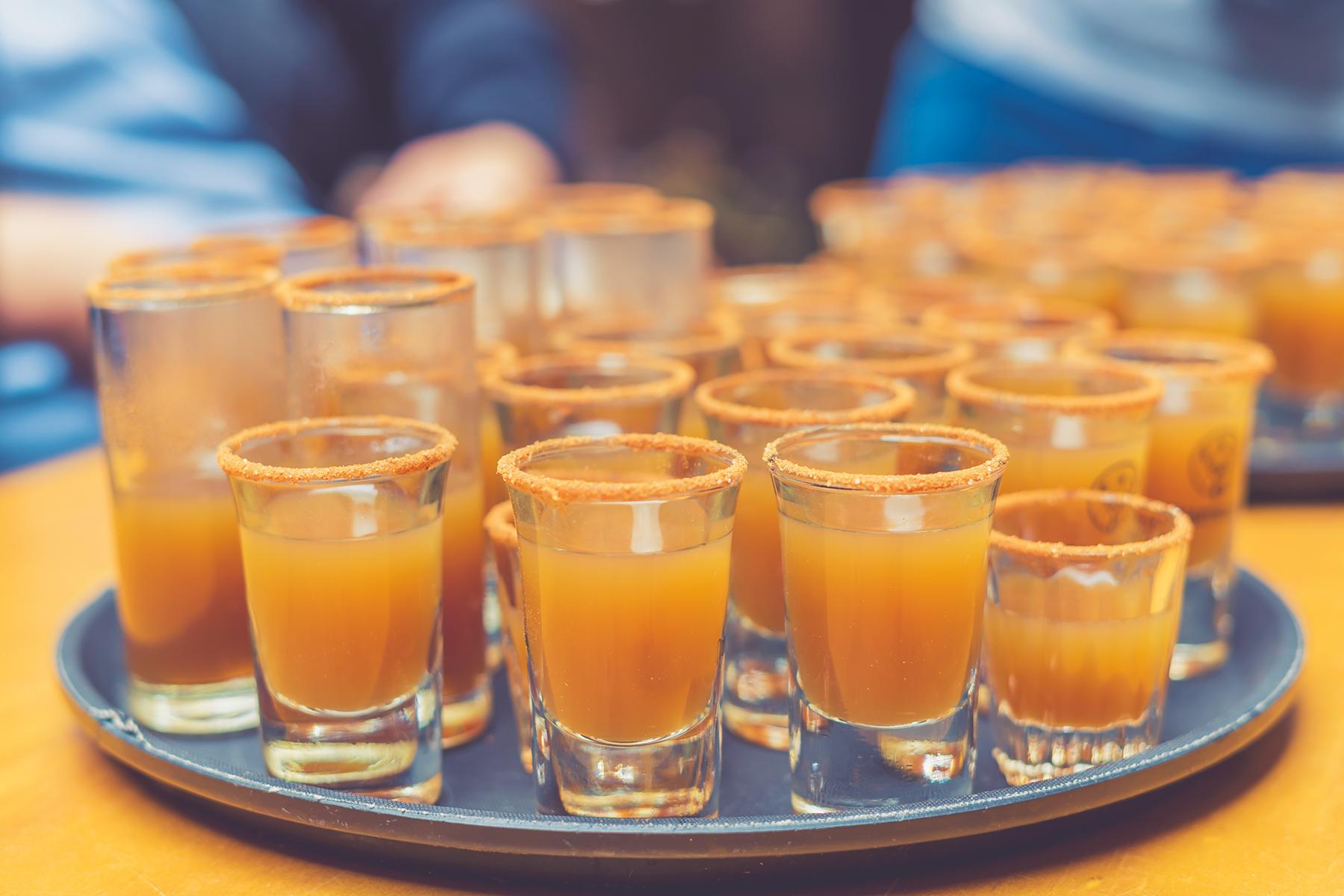 Chicha, Drink of the Gods

Originally brewed with the spit of holy women in pre-Colombian times, the fermented corn liquor known as chicha was illegal in Bogotá for the latter part of the 20th century. Today it’s making a comeback in the form of hipster chicha bars and museums in La Candelaria, the city’s historic downtown. There college kids, street artists, and other Bogotá bohemians congregate to partake of its mystical properties. Curious? Head to Calle del Embudo—Funnel Street—a cobblestoned alley with chicherías, whose vibe runs from from rock to rasta. The recently-opened Museo de la Chicha, around the corner in the Plaza del Chorro de Quevedo provides historical background. You can even grind your own maize into a bowl (spit not included). 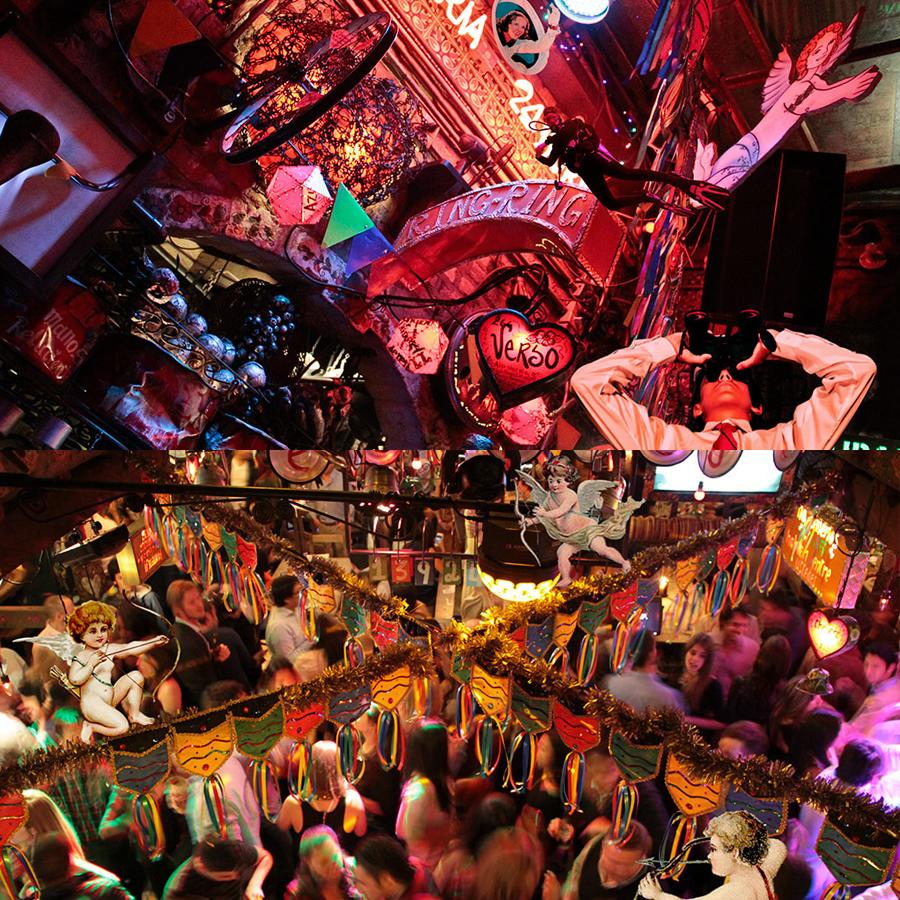 Your Party Is a Wonderland

Bent on “all-out, can’t believe-I-actually-did-that” sensory overload? Andrés Carne de Res is your mini-Babylon. Located an hour outside Bogotá, in the quiet suburb of Chía, this three-square-mile (yes, mile) restaurant/disco serves up a psychedelic, Alice in Wonderland-style trip, complete with insane bric-a-brac decorations, two dance floors, a 60-page menu, and rivers and rivers of aguardiente (Colombia’s firewater of choice). And yes, that is a climbing wall outside.

Andrés is serious about food, as well. Its crusty-yet-tender steaks and patacones con queso (plantain fritters with cheese) are sufficiently ricos to qualify for San Pellegrino’s 50 Best Latin American Restaurants list, and the cocktail list reads like War and Peace. Here, though, eats are mostly a preliminary. What’s crucial is the sheer excess of this now-legendary Colombian experience—another noche inolvidable in South America’s most ebullient capital.

INSIDER TIPAndrés has a second, in-town location for those not wanting to make the haul outside Bogotá. The Chía flagship, however, remains the best for serious partyers.