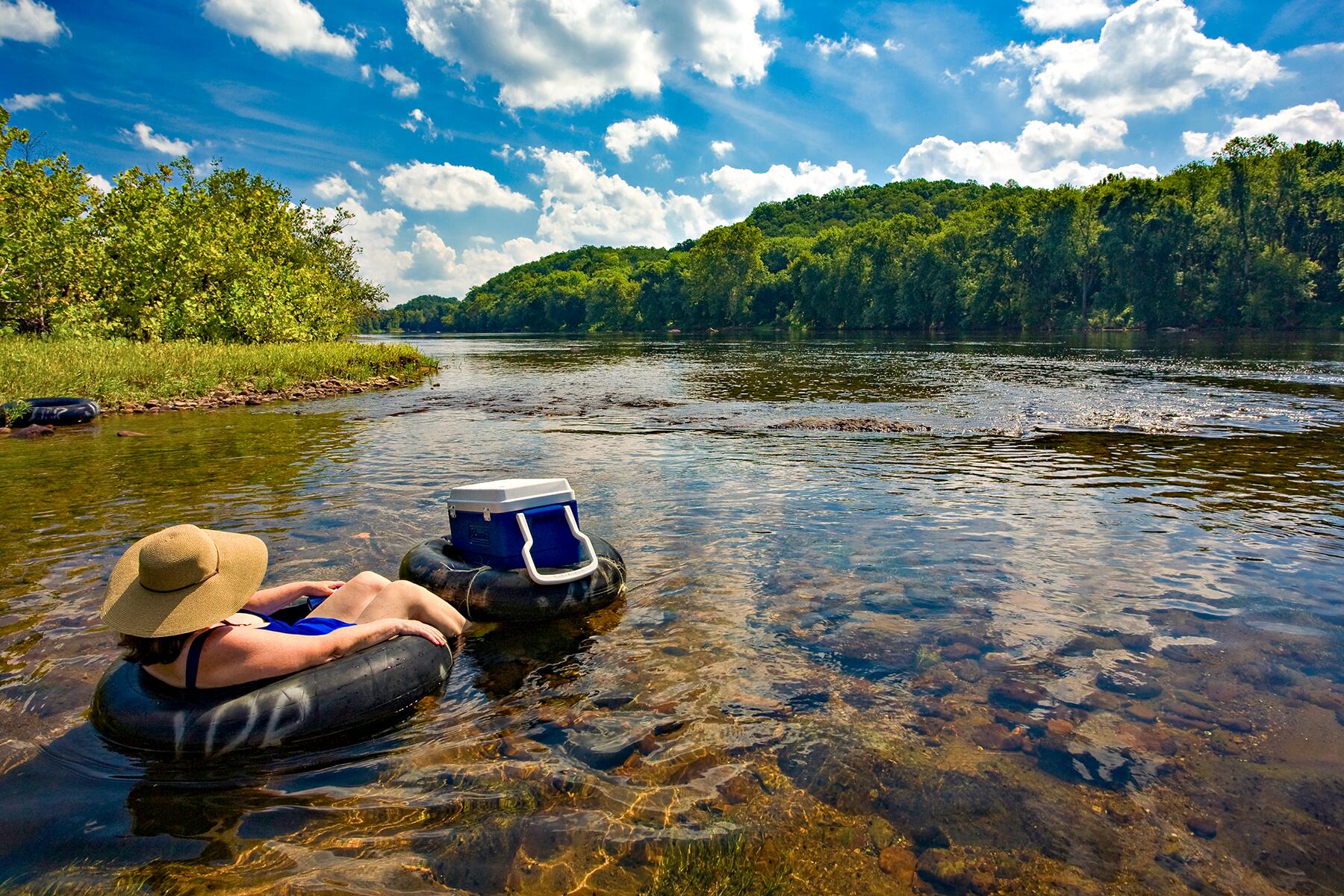 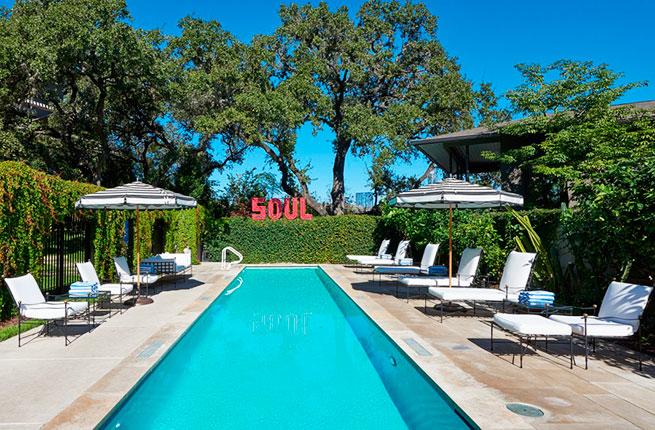 One of the best things about flying into Austin (besides the light-filled terminals and guitar-shaped baggage belts) is the location of its airport, less than 20 minutes from downtown. Arrive in the afternoon, grab your rental car—highly recommended, since this itinerary takes you to San Antonio on Sunday—and head toward the city’s South Congress neighborhood, located on the opposite side of the Colorado River from downtown. Before you know it, you’ll be checking into the snazzy Saint Cecilia (rooms from $370), a bohemian boutique lodging from prosecutor-turned-influential hotelier Liz Lambert. Drop your bags in your room. Hopefully you were able to swing the rate and booked Suite 1, a multi-room spread with a soaking tub, outdoor bamboo shower, and robin’s-egg-blue damask wallpaper that would make design mag editors swoon.

South Congress hasn’t been the it-neighborhood in Austin for a little while, but it's a lovely, mostly residential area. (Whatever you do, don’t stay downtown, which feels corporate, vast, and dreary.) The Cecilia is just a block from the main strip, South Congress Avenue, lined with a lively mix of restaurants and retail—some legit (Uncommon Objects, a vintage picker’s dream; Stag, a menswear boutique with a lumbersexual aesthetic), others touristy, some both, like Allens Boots, purveyors of Western wear on South Congress since 1977. Work up an appetite by shopping the drag and checking out Sfanthor House of Wax ($8 ticket), a zany horror wax museum housed in an artificial castle. It’s completely goofy, but will definitely give you plenty to talk about over dinner.

About dinner: You’re heading back across the river, northwest of the Capitol Building to Olamaie (average main $30), a suave Southern restaurant from chefs Michael Fojtasek and Grae Nonas, set in a pretty white house with a generous porch and dining room furnished with wainscoting, curtains, and coffered ceilings. The menu includes Gulf crab salad electrified with Texas citrus, ethereal Carolina Gold rice, tartare of venison heart, local chicken in soured Madiera cream, and more. Ask for the secret, off-menu biscuits. They’re served at brunch, but the staff keeps a stash in the back for in-the-know guests (you) who ask at dinner. In fact, order extra, get a doggie bag, go back to the Cecilia, and devour them in bed with some minibar bourbon. Save one biscuit. Pass out. Tomorrow’s a big day. 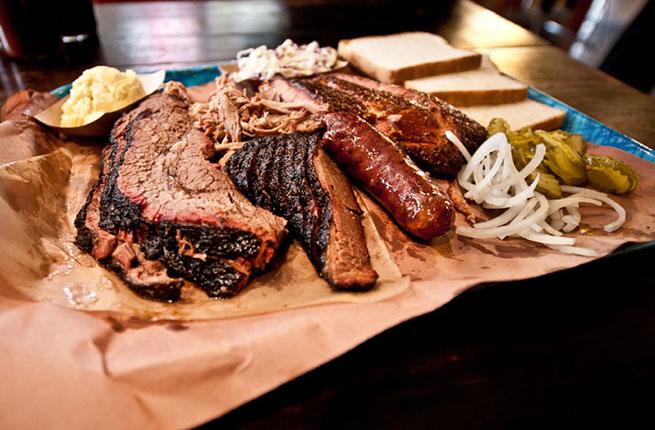 Get up early and get in your car. There’s no time for breakfast or coffee, just that final Olamaie biscuit you (hopefully) saved. The goal is to get to Franklin Barbecue (average main $10) as quickly as possible and be among the first in line for chef/owner Aaron Franklin’s life-changing brisket. (There’s a coffee truck, Legend Coffee, right around the corner.) Be prepared to wait three hours, which sounds like a complete waste of a half-day of vacation, but trust us: it’s so very, very, very worth it. Plus, the line is its own fun event, with a mix of food pilgrims and locals dragging out their best camp chairs and mini kegs for the duration of the morning. It’s like a tailgate without the sports, and with better food. Speaking of, when it’s finally your turn at the counter, you’ll order from a guy with rippling forearm muscles and a jus-splattered apron. Definitely get brisket (ask for a mix of fatty and lean), the pulled pork, pork ribs, and if they have any beef ribs on special, one of those. Grab a seat at one of the communal tables and go to town.

After Franklin, all you’ll want to do is nap. Resist! It’s a brisk mile-long walk to Austin’s most iconic building, the State Capitol. If you’re a history or architecture buff, join one of the free guided tours, which depart from the South Foyer every 20 to 30 minutes. If it’s warm enough to swim, head back across the river for another classic Austin experience, Barton Springs Pool (admission free). Fed by the underground Edwards Aquifer, this natural pool in the peaceful Zilker Park is 70 degrees year-round, with depths ranging from a few inches to 18 feet.

After working off that barbecue in the water, head back to the hotel to relax before dinner. (The Cecilia also has an outdoor pool if you feel like more swimming.) You’ll be heading to a new neighborhood tonight, East Austin, an enclave of art studios, cafes, and AirBnb cottages. Grab pony-sized Madeira-sodas or a couple of peach punches at Dai Due (average main $30) a combo restaurant/butcher shop on Manor Road, before heading to dinner at Launderette (average main $20). Housed in a converted gas station and Laundromat, this stylish yearling from Laura Sawicki and Rene Ortiz deals pan-Mediterranean small plates like wood-grilled prawns rouged with Aleppo pepper, brown-buttered burrata with fig jam, and ras el hanout-blackened okra. The “sticky” Brussels sprouts done with apple-bacon marmalade, pecorino, almond, and pickled apple are the heir apparent to Momofuku’s famous dish. Grab a nightcap or catch a band at Stay Gold a few blocks away. 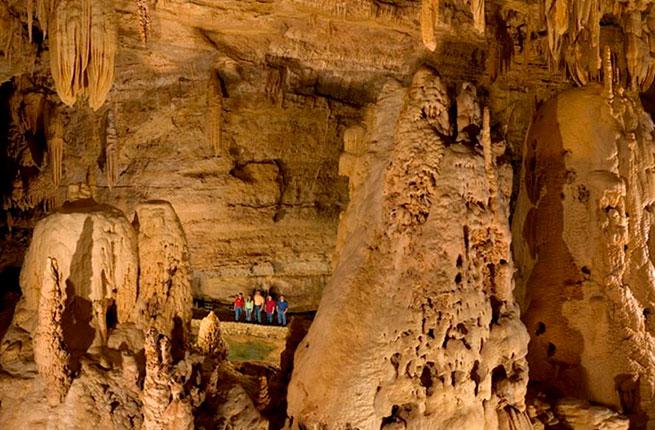 You’re looking at an hour-and-a-half drive to San Antonio this morning, so stop by one of the many Austin outposts of JuiceLand for something green and energizing before getting on the highway. About three quarters of the way there, you’ll hit the turnoff to the Natural Bridge Caverns (admission $20.99). One of two guided tours brings you more than 150 feet underground into this spectacular cave system. Looking up from the bottom of the humid cavern, it feels like you’re in some subterranean Gaudí cathedral. The caverns are absolutely a must-see in this part of Texas.

Continuing on to San Antonio, arrive in the Pearl District, the neighborhood emerging around the old Pearl Brewery, which was recently converted into the luxurious Hotel Emma (rates from $275), your plush base camp for the night. After checking in, head back downstairs to the onsite Pearl Farmers’ Market, which features more than 40 vendors on Saturdays and Sundays. Shop for edible Texas souvenirs like spiced pecans, jalapeño peanut brittle, black garlic, and extra-virgin olive oil, then pick up lunch from stands like Yapa Artisan Empanadas or CrepeLandia.

After lunch, head to downtown San Antonio, where the city’s most famous historical site, the Alamo (admission free), awaits. A living piece of Texas history, this preserved former Franciscan mission echoes with the ghosts of the volunteers who died here defending the city from the Mexican army. There’s a 20-minute short film in the former barracks hall that provides all the historical context you need to appreciate this site.

A short walk away, the River Walk is a touristy sub-street promenade meandering along the San Antonio River. Aside from the restaurants, the ivy creeping across the fairytale stone bridges and the kaleidoscope of umbrellas are undeniably enchanting. Don’t knock it 'til you try it.

It wouldn’t be a trip to Texas without tacos, which is why for dinner you’re heading to Ray’s Drive Inn, (average main $7) “home of the original puffy taco.” This cozy, wood-clad relic has been around since 1956 and lays claim to tacos served in tortillas that are deep-fried until they puff up like pillows. Devour three ground beef puffies and head back to the Pearl for few scoops at Lick, an Austin-based ice cream parlor with a location near the Hotel Emma. Flavors include Texas sheet cake, beet and mint, tequila lime pie, and vegan toasted coconut. 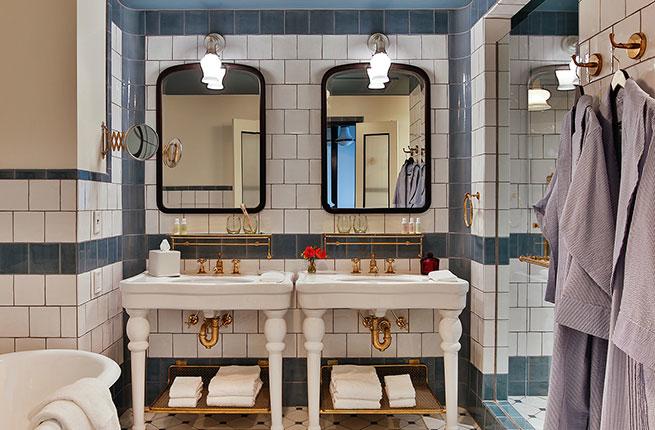 In Austin, the Saint Cecilia offers a unique experience in a great part of town. You can also check out its older brother, the Hotel San Jose (rooms from $233), which has the same brand of cool and lower rates. In San Antonio, the Hotel Emma has sumptuous rooms and a culinary theme; gourmet grocery, culinary concierge, farmers’ market, and brewery are all onsite.

Weather-wise, you can’t go wrong fall through spring in this part of Texas. Summer, meanwhile, can be brutal and almost commands a hotel with a pool. Study up on the University of Texas football schedule, which can complicate a fall trip. Ditto for the South by Southwest Festival in spring. Either can make a trip to Austin extra-exciting or extra-annoying (and expensive), depending on how you feel about sports and festivals.

American, United, and Delta all fly nonstop to Austin-Bergstom International Airport from most of their hubs. In addition, you can get there nonstop on Alaska, Virgin, Frontier, Southwest, and JetBlue from select cities. Otherwise, you’re looking at a short connection, likely in Dallas. San Antonio is a larger city, but their international airport is served by fewer nonstops. Keep that in mind when booking.