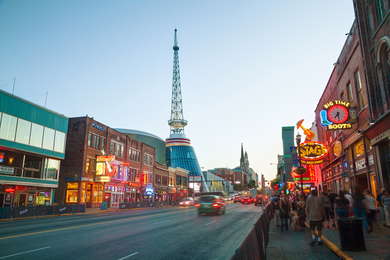 An Autograph Collection by Marriott hotel, Union Station Hotel Nashville is an experience in and of itself. The entrance, which embodies the idea of the journey being the destination, resembles old-school train travel, but welcomes guests to a luxurious stay. A repurposed Victorian-era railway station, the hotel preserves historical charm while meeting the expectations and needs of guests today.

Union Station consists of 125 refined guest rooms, including 17 deluxe suites with a workspace and separate living area. Reflecting the city's style, each room displays a blend of curated artwork, cowhide headboards, or leather furnishings along with iron and wire fixtures for a timeless appeal. Outfitted with television, wifi, and in-room coffee, guests have all essential comforts.

YOU SHOULD KNOW Though some of the large rooms have views of Nashville, others look out over the lobby, an equally impressive view. For an outward-facing window, request an exterior room.

The lobby maintains the stunning elegance of 20th century train travel while welcoming guests to an unusual stay. From glimmering chandeliers high above to massive stone fireplaces topped with a clock, the lobby is the centerpiece of the hotel. Ample seating and tables allow guests to meet and mingle or work in the beautiful setting. From high back chairs and chesterfield sofas to sculptures crafted by a local artist, the lobby ties traditional with modern. A two-sided marble bar parallels the front desk, which is reminiscent of a ticket booth counter.

Though there is not a pool, guests can stay in shape at the hotel's fitness room. Equipment includes all of the essentials like treadmills, ellipticals, free weights, and medicine balls.

Carter's is Union Station's restaurant. From mainstays such as Belgian waffles and steel cut oatmeal to Southern classics like shrimp and grits, the restaurant offers a modern take on shareable plates of the local cuisine.

The hotel bar also resides in Carter's, the two-sided marble bar with lobby seating. Locals and hotel guests alike can order from more than 40 whiskeys on the menu. Order a flight to try several, or opt for local nashville beer, also available in flights of three pours.

The hotel has its own specialty Jack Daniels for guests and locals alike to try.

The hotel offers valet parking for $40 per day. Parking is otherwise $18 for two hours, $28 for up to eight hours, and $35 for upwards of eight hours.

Choose to walk or Uber to get around Nashville. Union Station is a 10-minute walk to the Country Music Hall of Fame.

The hotel is one mile or less from Biscuit Love (12-minute walk), Catbird Seat (5-minute drive), and the famous Hattie B's Hot Chicken (5-minute drive). Biscuit Love is just what is promises -- a menu of biscuits served up any way you can imagine. This location, one of three, is in Nashville's Gulch neighborhood. Catbird Seat brings diners into the interactive kitchen at this 22-seat fine dining restaurant where the guests can watch the chefs actively create the meal. Hattie B's Hot Chicken is famously Nashville. The choices are limited, but the flavor isn't.

The classic Bluebird Cafe (15-minute drive) is eight miles from the hotel. M. Restaurant and Bar (6-minute walk), The Patterson House (5-minute drive), and Robert's Western World (13-minute walk) are all nearby as well. Visit Bluebird Cafe and Robert's Western World to mark off two Nashville highlights, then head to M. Restaurant and Bar and The Patterson House for an impressive wine selection and expertly crafted cocktails in stylish, yet cozy digs.

Set in a restored neo-Romanesque train station, Union Station is breathtaking. It features a 65-feet high ceiling of 100-year-old Tiffany stained glass. Combining luxury of the past with nods to the present by way of local art, the hotel reminder to embrace romance of slow travel.

#4 The 8 Most Instagrammable Hotels in Nashville